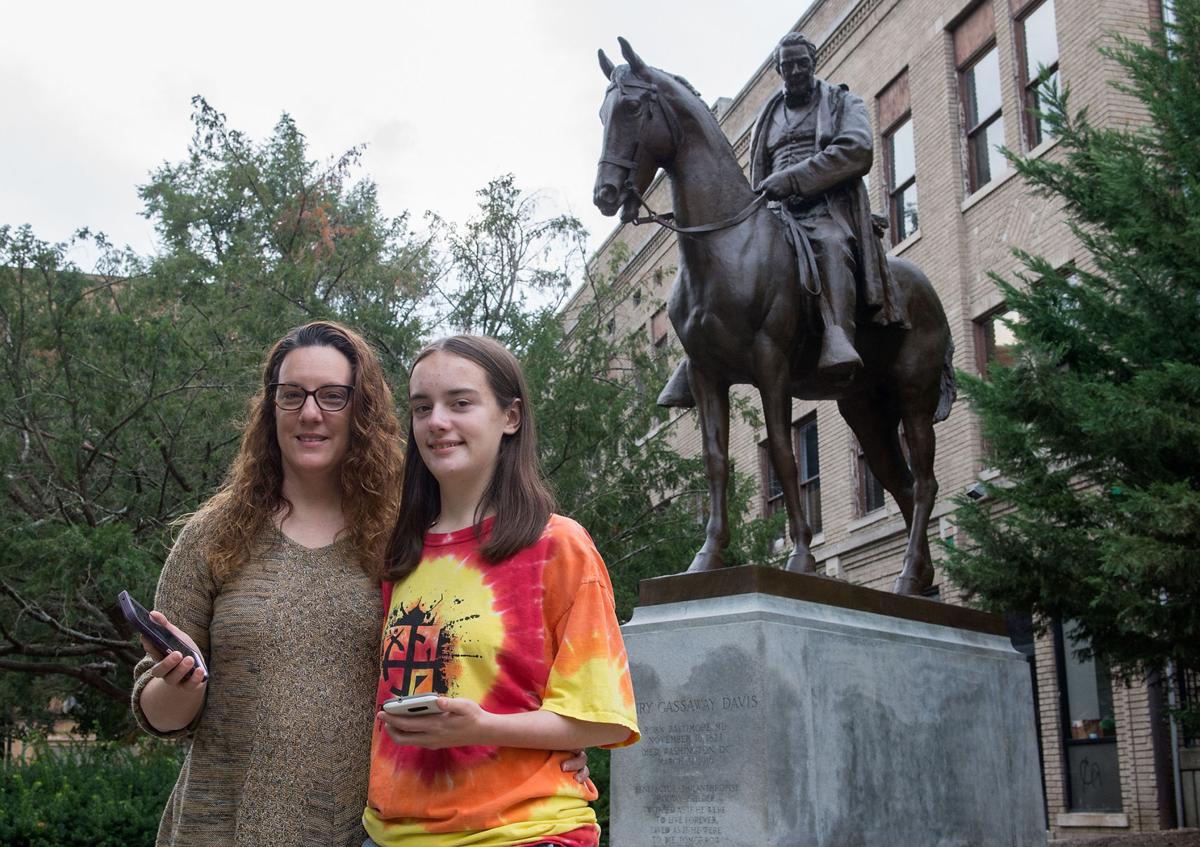 Pam Thor and her daughter Danielle, 15, in Davis Park, in Charleston. Danielle has designed a geocache on Capitol Street called Capitol Safari, where the clues come from animals featured on different buildings and likenesses, such as the sculpture of Henry Gassaway Davis and the horse he is on. 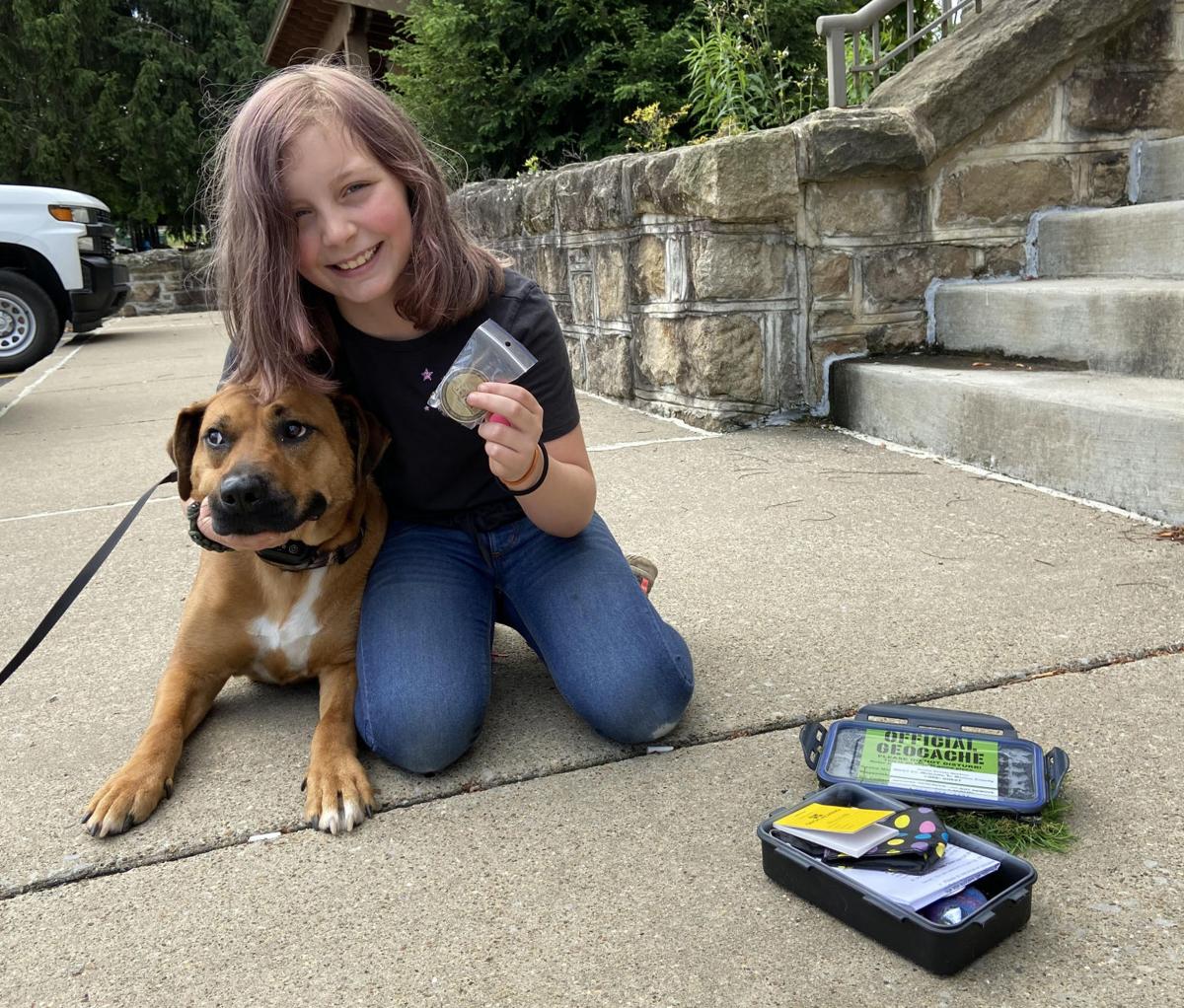 The Marion County Convention and Visitors Bureau gave out souvenir coins to those who found the ten official caches on their trail. Kelcie Chris (above) was the first geocacher to complete the trail. 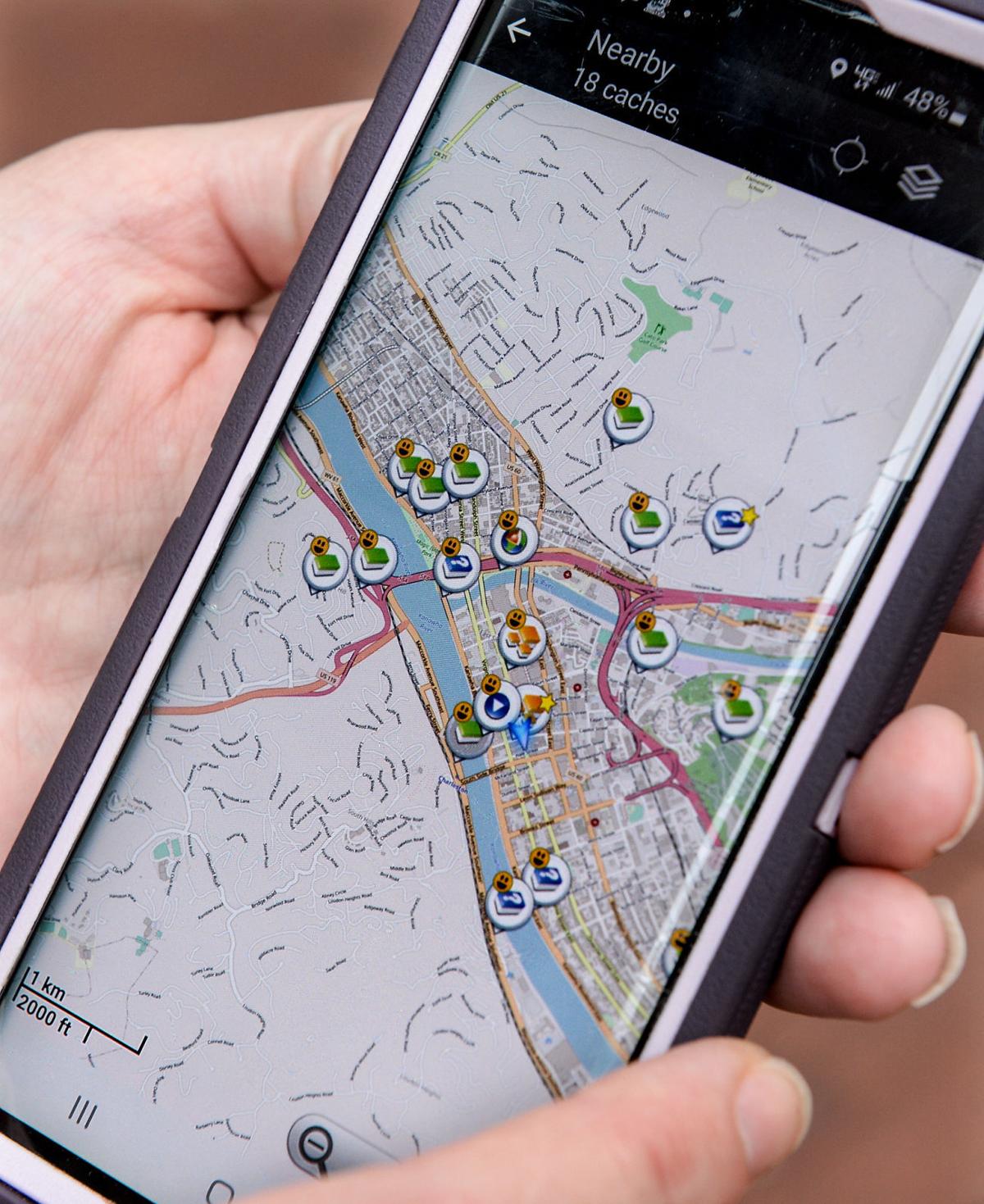 A geocache application on a smartphone showing numerous geocaches in the Charleston area. 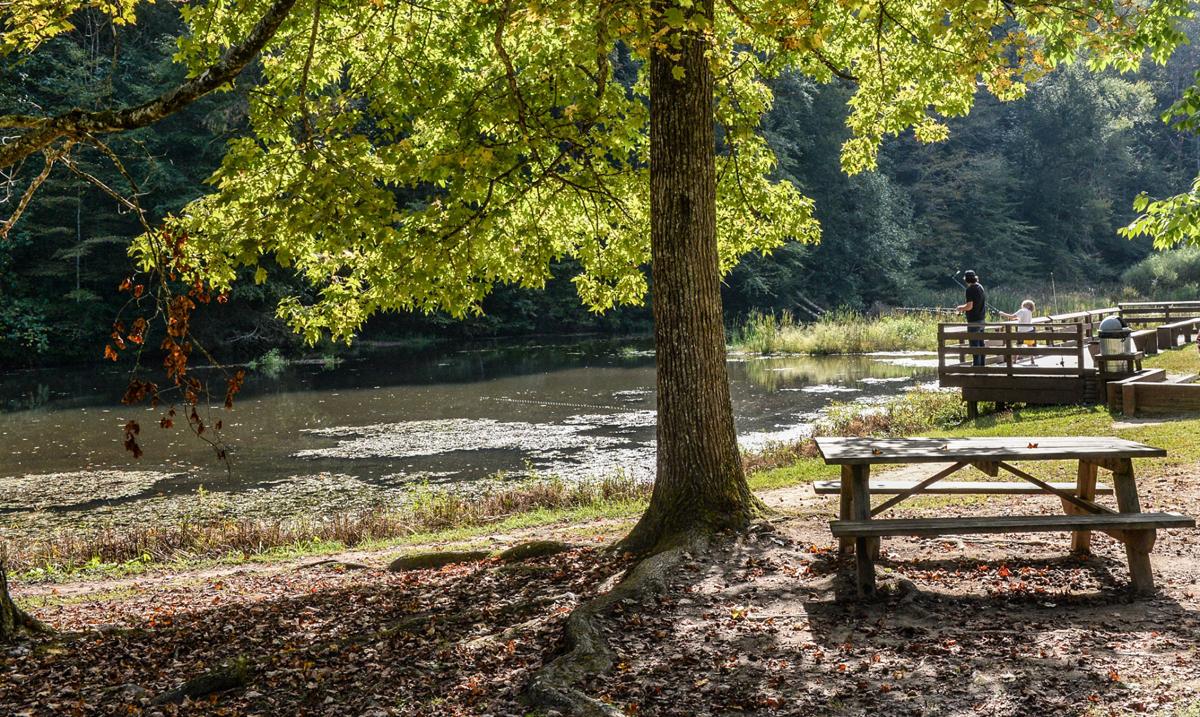 A geocache has been established in the area of Ellison Pond near the entrance to Kanawha State Forest, according to Superintendant Chris Bartley. There have been about eleven geocaches set up inside the park.

Pam Thor and her daughter Danielle, 15, in Davis Park, in Charleston. Danielle has designed a geocache on Capitol Street called Capitol Safari, where the clues come from animals featured on different buildings and likenesses, such as the sculpture of Henry Gassaway Davis and the horse he is on.

The Marion County Convention and Visitors Bureau gave out souvenir coins to those who found the ten official caches on their trail. Kelcie Chris (above) was the first geocacher to complete the trail.

A geocache application on a smartphone showing numerous geocaches in the Charleston area.

A geocache has been established in the area of Ellison Pond near the entrance to Kanawha State Forest, according to Superintendant Chris Bartley. There have been about eleven geocaches set up inside the park.

Imagine you go searching for a hidden treasure. Using your smartphone or a GPS device, you follow coordinates and clues until you come within feet of the treasure. Then, you have to find the treasure, open it, sign the log book and return it to its place — without anyone seeing you do it.

That’s the delight and dilemma of geocaching, a pastime that first became popular a few years ago as smartphones became ubiquitous. For today’s explorers, geocaching has the added bonus of being the perfect social distancing activity during the COVID-19 pandemic.

This worldwide phenomenon began 20 years ago when the federal government discontinued Selective Availability, a practice of degrading publicly available GPS signals by inserting random errors in the signals so it was impossible to accurately determine your position with GPS equipment. Once the U.S. military developed technology that allowed them to scramble GPS signals over sensitive areas, Selective Availability became obsolete and was switched off.

That same year, people began hiding geocaches and sharing just enough information about where the caches were hidden to challenge those who wanted to search for them.

The early caches were often placed in rural and wooded areas. Today, caches can be found in forests, along rivers, in cities and towns. Most likely, people pass geocaches every day and don’t know it.

According to Geocaching.com, the official website of Geocaching HQ, there are millions of players in the world and more than 3 million geocaches in more than 190 countries.

Pam and Alan Thor got interested in geocaching in 2012 when their daughter, Danielle, was working on a Brownie badge for letterboxing, which is similar to geocaching.

“We were going to Niagara Falls and decided we’d see how many letterboxes we could find,” said Pam. “We found the geocaching website and realized there were caches all over Niagara Falls that took us to places in the area we might not have noticed or visited. When we came home to West Virginia, we decided to start geocaching here.”

Then, Pam, Alan, Michael and Danielle Thor realized that because local people set up the caches, they place them in unique spots that might not be found in guidebooks. They also learned that being members of Geocaching.com is a great way to discover what other geocachers enjoyed.

“Geocachers love to share their finds with others,” Pam said. “They log their visits online, marking some sites as favorites because of the scenery or perhaps because of the history associated with a place. It’s fun to follow the clues and solve puzzles to get to the caches.”

Clinton Cochran, Babcock State Park superintendent, is an avid geocacher who learned about geocaching from friends and finds it a great family activity.

“We’ve had great times discovering new places when we’ve gone on vacations or just searching for geocaches in our community,” Cochran said.

He said he enjoys seeing what other geocachers write in the logbooks that are placed in each geocache. “You are supposed to sign your name and sometimes people write a message about how they found the cache and their experiences searching for it,” he said. “Sometimes they post pictures of their family, dog or something near the cache in their online reporting logs to the geocache website. Those are fun to see.”

There are several caches hidden at Babcock State Park, he said.

“Geocaching is a year-round activity, so it’s something that people who visit a state park can enjoy no matter when they visit,” Cochran said. “The caches at state parks are not only placed by the park system, but individuals can place caches, as well, and we are always open to adding caches.”

Thirty-four West Virginia state parks and forests have geocaches. Some, like Watoga State Park and Coopers Rock State Forest, have numerous caches. They are all listed on wvstateparks.com.

Kanawha State Forest Superintendent Chris Bartley, who helped develop geocaching at Watoga State Park before moving to Kanawha State Forest, said, “Geocaching is another good avenue for visitation at state parks. We would be glad to have more caches here.”

If someone wants to place a cache at a state park, they must get the OK from the State Parks office and provide information about the cache and where they want to place it. This way, the state park superintendents know that the caches are hidden according to geocaching and state park guidelines. Additionally, all geocache placements will need to be reviewed and approved by Geocaching.com for listing on their site.

“I didn’t know much about what should go into a geocaching trail until we hired Mark Webb, a recent East Fairmont High School graduate, as a summer intern,” said Elliott. “He is an avid geocacher and was excited to develop the 10-site trail for us.”

Webb knew that cache sites needed to be more than 528 feet apart and that the trail needed to have a mix of sites to draw geocachers to it. The CVB ordered the cache boxes and filled them with the requisite logbook and other items.

“The trail really took off when we shared it on social media, and people were excited to get a souvenir coin from the CVB after visiting all 10 sites,” Elliott said. “We’ve had many local geocachers and visitors from Ohio and Pittsburgh since we opened our trail.”

The trail takes geocachers beyond Fairmont, to Mannington’s #9 Mine Memorial, Hamilton Round Barn and the covered bridge in Barrackville.

In Berkeley County, geocaching is a popular tourism draw. The Martinsburg-Berkeley County Convention and Visitors Bureau partnered with an internationally recognized geocache designer to develop five trails, including the Berkeley Gadgets GeoTour.

“We are fortunate that native West Virginian Tim Eggleston, known to geocachers as WVTim, lives in our area and that he builds and maintains the caches on our trails,” said Mark Jordan, the CVB executive director. “We are telling the stories of the villages, history and natural beauty of our area with our caches.”

Like Marion County, geocachers in Berkeley County get a special coin if they complete the Berkeley Gadget Tour. “One of the caches is a night cache, requiring many geocachers to stay overnight,” Jordan said. “Because WVTim’s geocaches are the most favorite in the United States, geocachers have traveled from most states and more than 10 countries to participate in the trails, bringing thousands of visitors to Berkeley County.”

For some geocachers, the fun of the activity is not only about finding geocaches, but about hiding them.

Cochran has set up geocaches and loves to see the messages that people leave when they find them. “It’s great when someone thanks you for the geocache and says they were glad it was hidden in a special place that gave them a reason to see something they might not have otherwise,” he said. “Caches can be all shapes and sizes as long as they are large enough to hold a log sheet. It’s fun to get creative with your caches.”

The Thor family has enjoyed setting up cache challenges as well. “Danielle has a puzzle cache called Charleston Safari,” Pam said. “She researched buildings along Capitol Street and set up a trail that leads you to look for animals designed into the concrete structures.”

The Thors also have geocaches in Niagara Falls, Pennsylvania and Hawaii. “You have to go by boat to reach the one in Hawaii,” Thor said.

Another fun aspect of geocaching is choosing small swag items to leave in the caches. The rule is if you take swag, you leave swag. These items can be small, plastic items or key chains. Often they are items that children will like. Some geocachers choose to leave items that represent their home or interests.

“You never know what you might find,” said Hoy Murphy, who discovered geocaching while writing an article for Wonderful West Virginia magazine several years ago. “Our family often took our dog, Kirby, along with us on geocaching searches, so our daughter, Erin, made small bags with Kirby’s picture on them and we called ourselves Kirby’s Pals.”

Some geocachers leave trackable items in caches and ask that people who find them take them to another cache and leave them in another spot and log on to the geocaching site to let the owner know where the trackable item is. Many trackables travel thousands of miles, from state to state and even overseas.

A youthful geocacher who was studying West Virginia history asked that her trackable make its way to all 55 Mountain State counties. Since each trackable has its own website on Geocaching.com, she tracked it on an interactive map, reading about its travel and seeing photos that many of the geocachers who picked it up posted of the county it was visiting.

“It made learning the counties come alive for her,” said Eggleston.

“You think of geocaching as an activity that you do with one or two other people or with your family,” said Pam. “It is much more than that. Within the geocaching community, there are local groups and online connections that allow you to make so many good friends while you are getting to know more about the world.”

To learn more about geocaching, how to get started and where geocaches are, visit geocaching.com.