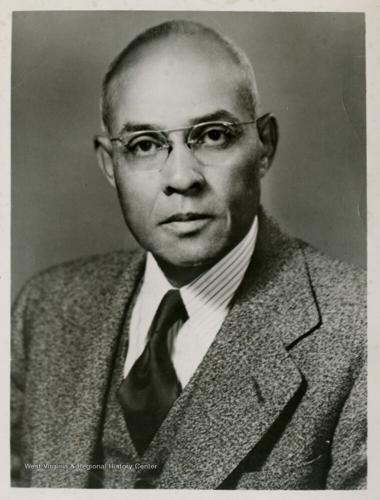 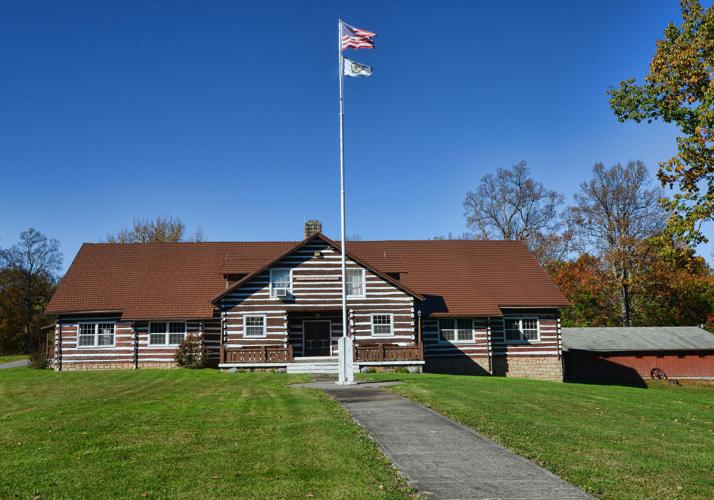 Camp Washington-Carver at Clifftop was built originally to be the first statewide Black 4-H camp in the country. 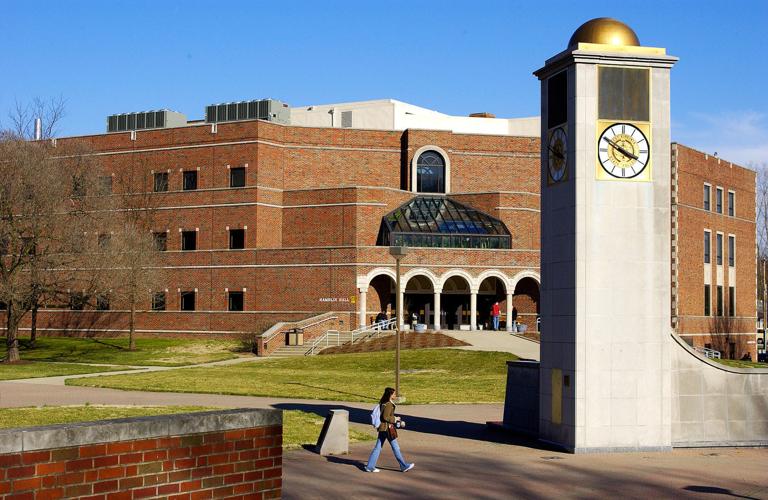 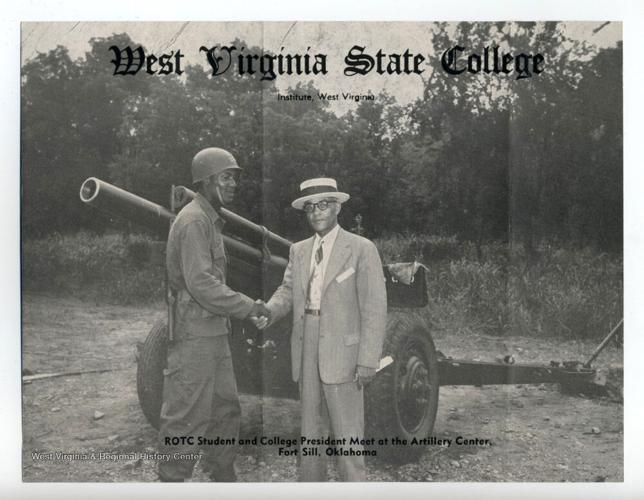 John Warren Davis, then president of WVSC, meets with a soldier in 1952. Davis’ influence was instrumental in integrating the military. 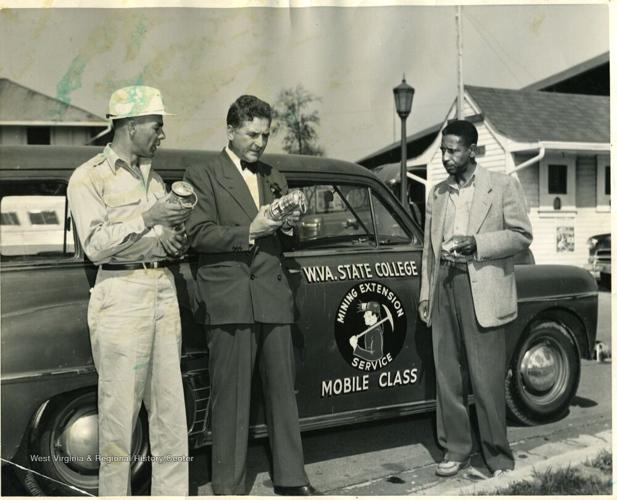 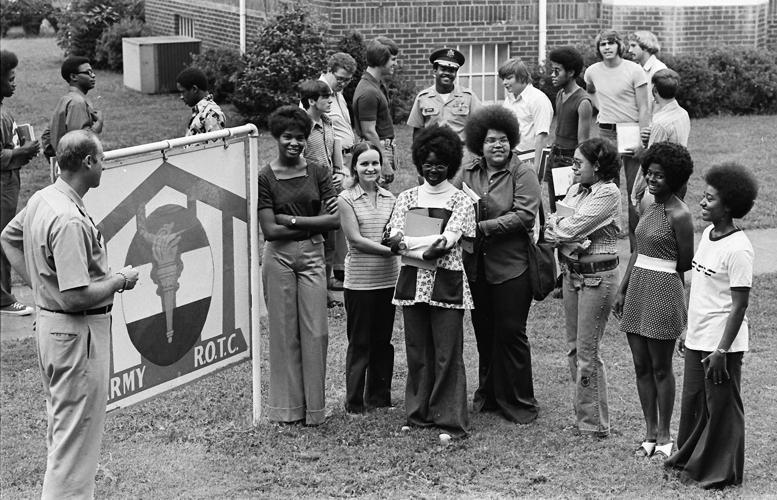 West Virginia State College’s groundbreaking military science courses found quite a few women in ROTC classrooms for the first time. In this 1973 file photo, Col. Stanley Goldsmith talks with some of the 24 women involved in the program.

Camp Washington-Carver at Clifftop was built originally to be the first statewide Black 4-H camp in the country.

John Warren Davis, then president of WVSC, meets with a soldier in 1952. Davis’ influence was instrumental in integrating the military.

West Virginia State College’s groundbreaking military science courses found quite a few women in ROTC classrooms for the first time. In this 1973 file photo, Col. Stanley Goldsmith talks with some of the 24 women involved in the program.

For nearly the first century of our nation’s history, formal education was reserved almost exclusively for the wealthy who could afford private schools. Very few educational opportunities existed for African Americans, and Southern states made it a crime to educate slaves.

In the middle of the Civil War, which ultimately ended the inhuman practice of American slavery, Congress began to address national educational inequities.

In 1862, Congress passed and President Abraham Lincoln signed the Morrill Act, funding land-grant institutions in each state so young people from more modest backgrounds could study farming and mechanical arts on a more scientific level.

The fundamental result, though, was a revolution in education. For the first time, everyday Americans could now obtain what amounted to high school and college educations.

In 1867, the doors of the Agricultural College of West Virginia opened in Morgantown; it was renamed West Virginia University the next year. But, as in many other states, the doors of our state land-grant institution were not open to African Americans — or, for many years, to women. The only higher education option for African Americans in the Mountain State was at the privately run Storer College in Harpers Ferry, located a long distance from most West Virginians.

In 1892, the West Virginia Colored Institute — as it was originally known — opened at what would become known as Institute in western Kanawha County. The campus was built on a former plantation and sold to the state by a family who’d once been enslaved there [see James Haught’s “Institute: It Springs from Epic Love Story,” January 1971 West Virginia History; David Fryson’s “A Most Enigmatic Relationship,” Summer 2020 Goldenseal; and the 2020 film “River of Hope,” available on Amazon Prime].

The school’s first three presidents — J. Edwin Campbell, John H. Hill and J. McHenry Jones — did much of the early heavy lifting just to get the school up and running.

During the 1910s, the fourth president, Byrd Prillerman, expanded the curricula to include more liberal arts courses, as opposed to primarily vocational trades. Under his leadership, the school transitioned from what was essentially a high school to a degree-granting institution.

In 1915, the Legislature changed the school’s name to the West Virginia Collegiate Institute.

But it was the fifth president who would take the college to greater heights.

John Warren Davis was born in Milledgeville, Georgia, in 1888. He graduated from Atlanta’s Morehouse College and earned a Ph.D. in physics and chemistry from the University of Chicago. He was back serving as Morehouse’s registrar when Prillerman resigned in 1919. Administrators at Institute initially reached out to the eminent educator and West Virginia native Carter G. Woodson to replace Prillerman; however, Woodson, remembered today as the Father of Black History, declined so he could remain at prestigious Howard University and pursue his various projects.

Upon his arrival at Institute, Davis was shocked that fewer than half the faculty had college degrees and that less than 10 percent of students were enrolled in college-level courses. So, he introduced classes in English, Latin, Greek, history, political science, and philosophy. He also began recruiting the most-qualified African American professors and students in the state and nation.

As fate would have it, one of his new hires was Woodson, who’d clashed repeatedly with Howard’s president and resigned from that university in 1920.

As dean of West Virginia Collegiate Institute’s College Department, Woodson brought instant stature to the school. During his brief, two-year stay, he and Davis significantly increased course offerings and put the college on the map — increasing enrollment by 50 percent.

In 1927, to Davis’ great credit, the school became one of the first four original Black land-grant institutions to be regionally accredited. By 1929, enrollment had reached nearly 1,000, and the Legislature changed the school’s name to West Virginia State College (which it would remain until becoming West Virginia State University in 2004).

In only a decade, Davis had transformed the college into one of the premier institutions of higher learning in the nation.

Davis’ work received extensive attention. In 1931, during the darkest days of the Great Depression, President Herbert Hoover appointed him to the federal Organization of Unemployment Relief. Davis leveraged his growing reputation to benefit the college and West Virginia’s African Americans, in general.

In 1939, he appealed to the federal Civilian Aeronautics Authority to establish one of the nation’s first Civilian Pilot Training programs and the first at a Historically Black College or University. The program allowed civilian pilots to train new flyers in anticipation of the United States entering World War II; the official approval came 10 days after Hitler’s invasion of Poland.

In a groundbreaking move for a HBCU, Davis established an integrated pilot program — a precedent for Harry Truman integrating the military in 1948.

Throughout his tenure, Davis also promoted the school’s ROTC, leading to many other firsts among African Americans in the military.

Much of Davis’ success was due to his deft political skills. He lobbied the Legislature to increase its support for the continually underfunded Black Extension work, headquartered at WVSC. In 1936, he successfully appealed for the Legislature to establish a statewide Black 4-H camp.

Camps were at the heart of the Extension’s 4-H Movement, but none existed for African Americans in West Virginia. With funding from the Legislature and federal New Deal programs, Davis oversaw construction of Camp Washington-Carver (named for Booker T. Washington and George Washington Carver) between 1940 and 1942, adjacent to the new Babcock State Park in Fayette County. It was the first statewide Black 4-H camp in the nation.

Over the years, these facilities were used by African American children and adults alike who came for classes and workshops on farming, homemaking and even coal mine safety. Thanks to Davis’ insight, Camp Washington-Carver was hosting some 1,600 people annually by the 1950s.

From WVSC to Liberia

Not all of his years at WVSC were pleasant. His first wife, Bessie, died in 1931 after nearly 15 years of marriage. The next year, he married Ethel McGee (1899-1990), who resigned her position as dean of women at Atlanta’s Spellman College and moved to Institute.

From their home in East Hall, they and their family — including two of Davis’ daughters with Bessie and one of their own — hosted elegant functions for prominent educators, writers and intellectuals, including W.E.B. DuBois, Mary McLeod Bethune, George Washington Carver, Langston Hughes, and Eleanor Roosevelt.

The couple remained together the rest of his life — 48 years in total. Later in life, Ethel McGee Davis would set up a school for underprivileged children in Haiti.

In 1952, while still president of WVSC, Davis began serving as an assistant to the U.S. ambassador to Liberia — part of Truman’s program to support developing countries. Davis later reflected on this profound experience: “I, like many people in the country, took the position that an underdeveloped country was anything but a country. But I found that we are very underprivileged as a nation in our concept of other nations.”

He retired from WVSC the following year after 34 years at the helm, still a school record.

In 1955, after leaving his indelible imprint on West Virginia, Davis accepted an appointment by Thurgood Marshall to be director of the NAACP Legal Defense Fund’s Teacher Information and Security Program in New York City. Davis had been one of the first appointees to the LDF board when it was set up in 1939.

The LDF had just won the 1954 Brown v. Board of Education U.S. Supreme Court decision that integrated our nation’s public schools. As Davis later noted, Marshall wanted him to “give meaning to the word ‘teacher’” in the program’s title, since the LDF had primarily been a legal organization up to that point.

Davis saw his new job two-fold. His first goal was to fight for African American teachers’ jobs, which were being eliminated in mass numbers as school systems integrated and Black schools closed. White teachers, sometimes with less seniority and fewer qualifications, frequently were being selected for jobs in integrated schools over their Black counterparts.

In addition to persuading boards of education to retain African American educators, Davis developed a long-term approach: training the next generation of Black teachers to become better qualified and licensed, making it harder to dismiss them or deny them jobs. He also oversaw a scholarship program for Black undergraduates and law students. Davis committed himself to this role for the rest of his life as both an employee of and, later, a retired consultant to the NAACP.

As the years went by, Davis became more publicly vocal regarding his own political views. In a 1970 speech, he denounced the Vietnam War, declaring, “No nation will win this war, and our continued participation will weaken the vitality of America and destroy its substance.”

In the same speech, he called for healing racial divisions in the streets of America. In a 1973 commencement address at WVSC, he urged graduates never to allow another Watergate to occur again.

He died in 1980 at age 92 in Englewood, New Jersey. Until the end, Davis was looking to the future, anticipating how schools, particularly HBCUs, would need to adapt for the 21st century.

Always ahead of his time, Davis was one of the great education leaders of the 20th century, born in the previous century with an eye toward the one to come.

Stan Bumgardner is the former editor of Goldenseal magazine, and has been a historian in West Virginia for more than 30 years.

Mind Your Manners: A guide to tipping service workers at the holidays

A Cappella is coming to West Virginia

Remembering Woody: A tribute in pictures

Susan Johnson: Conscience and voting in the post-Roe age

Cooking tips, fun recipes and easy ways to give back this holiday season

Pair Soup and Sandwich for a Warming Winter Meal