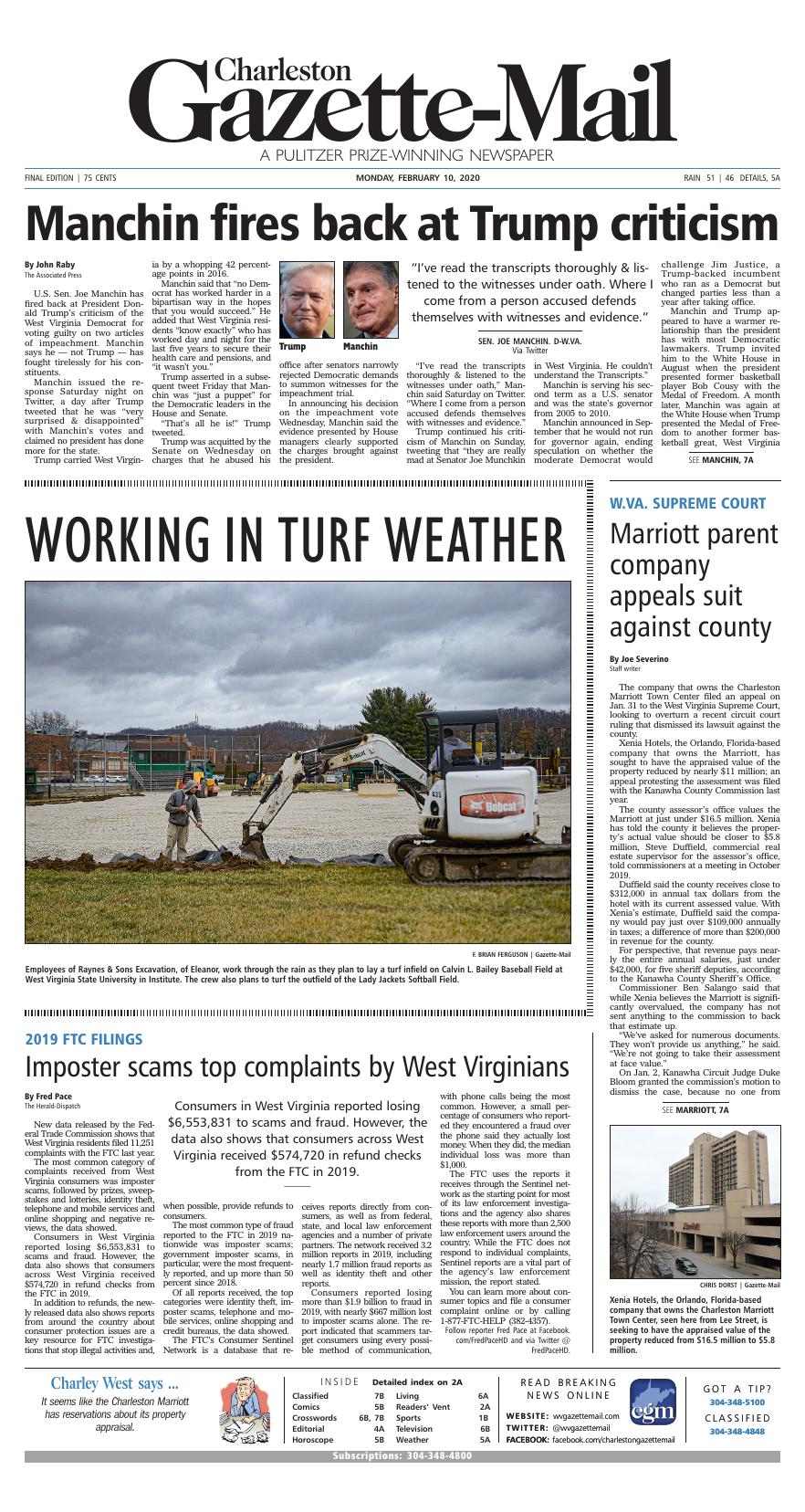 Sen. Joe Manchin, D-W.Va., speaks with reporters after President Donald Trump was acquitted in an impeachment trial on charges of abuse of power and obstruction of Congress on Capitol Hill in Washington, Wednesday, Feb. 5, 2020. (AP Photo/Patrick Semansky)

Sen. Joe Manchin, D-W.Va., speaks with reporters after President Donald Trump was acquitted in an impeachment trial on charges of abuse of power and obstruction of Congress on Capitol Hill in Washington, Wednesday, Feb. 5, 2020. (AP Photo/Patrick Semansky)

President Donald Trump waves as he arrives at the White House, Friday, Feb. 7, 2020, in Washington, as he returns from a trip to Charlotte, N.C. (AP Photo/Manuel Balce Ceneta)

U.S. Sen. Joe Manchin has fired back at President Donald Trump’s criticism of the West Virginia Democrat for voting guilty on two articles of impeachment. Manchin says he — not Trump — has fought tirelessly for his constituents.

Manchin issued the response Saturday night on Twitter, a day after Trump tweeted that he was “very surprised & disappointed” with Manchin’s votes and claimed no president has done more for the state.

Trump carried West Virginia by a whopping 42 percentage points in 2016.

Manchin said that “no Democrat has worked harder in a bipartisan way in the hopes that you would succeed.” He added that West Virginia residents “know exactly” who has worked day and night for the last five years to secure their health care and pensions, and “it wasn’t you.”

Trump asserted in a subsequent tweet Friday that Manchin was “just a puppet” for the Democratic leaders in the House and Senate.

“That’s all he is!” Trump tweeted.

Trump was acquitted by the Senate on Wednesday on charges that he abused his office after senators narrowly rejected Democratic demands to summon witnesses for the impeachment trial.

In announcing his decision on the impeachment vote Wednesday, Manchin said the evidence presented by House managers clearly supported the charges brought against the president.

“I’ve read the transcripts thoroughly & listened to the witnesses under oath,” Manchin said Saturday on Twitter. “Where I come from a person accused defends themselves with witnesses and evidence.”

Trump continued his criticism of Manchin on Sunday, tweeting that “they are really mad at Senator Joe Munchkin in West Virginia. He couldn’t understand the Transcripts.”

Manchin is serving his second term as a U.S. senator and was the state’s governor from 2005 to 2010.

Manchin announced in September that he would not run for governor again, ending speculation on whether the moderate Democrat would challenge Jim Justice, a Trump-backed incumbent who ran as a Democrat but changed parties less than a year after taking office.

Manchin and Trump appeared to have a warmer relationship than the president has with most Democratic lawmakers. Trump invited him to the White House in August when the president presented former basketball player Bob Cousy with the Medal of Freedom. A month later, Manchin was again at the White House when Trump presented the Medal of Freedom to another former basketball great, West Virginia native Jerry West.

Republicans have gained the upper hand in West Virginia in recent decades. But the moderate Manchin won a second full term to the Senate in the 2018 elections in a tight race against a Trump-backed challenger.

U.S. Sen. Shelley Moore Capito, a West Virginia Republican who voted against impeachment, told Fox News on Thursday that people in the state are “rather mystified” by Manchin’s vote.

“I just feel that probably Sen. Schumer just pulled the noose a little tight and said, ‘Come on, everybody, we’re going to jump off this cliff together,’ and back here, West Virginians, they’re very surprised,” she said. 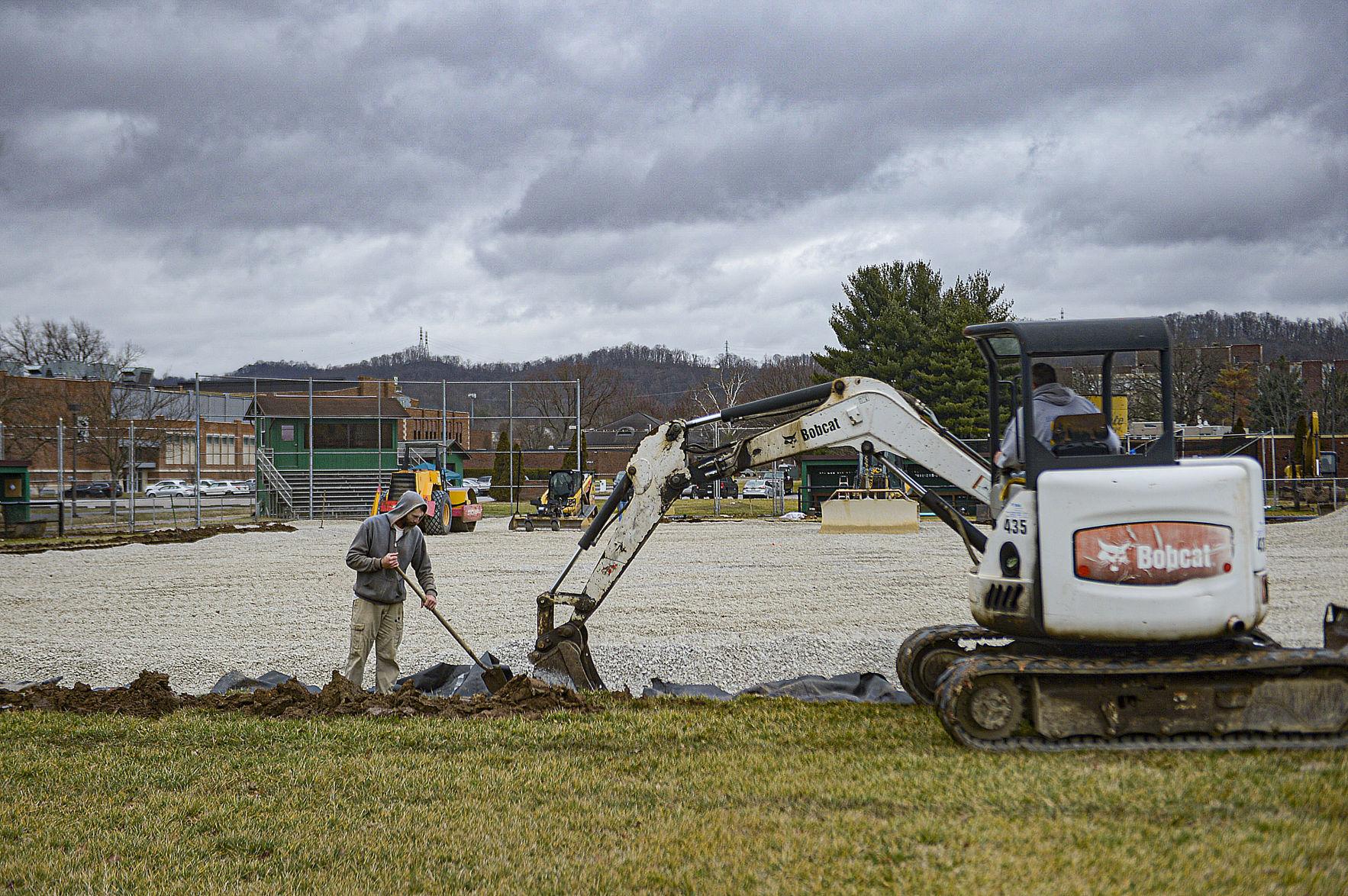 Employees of Raynes & Sons Excavation, of Eleanor, work through the rain as they plan to lay a turf infield on Calvin L. Bailey Baseball Field at West Virginia State University in Institute. The crew also plans to turf the outfield of the Lady Jackets Softball Field.

The most common category of complaints received from West Virginia consumers was imposter scams, followed by prizes, sweepstakes and lotteries, identity theft, telephone and mobile services and online shopping and negative reviews, the data showed.

Consumers in West Virginia reported losing $6,553,831 to scams and fraud. However, the data also shows that consumers across West Virginia received $574,720 in refund checks from the FTC in 2019.

In addition to refunds, the newly released data also shows reports from around the country about consumer protection issues are a key resource for FTC investigations that stop illegal activities and, when possible, provide refunds to consumers.

The most common type of fraud reported to the FTC in 2019 nationwide was imposter scams; government imposter scams, in particular, were the most frequently reported, and up more than 50 percent since 2018.

The FTC’s Consumer Sentinel Network is a database that receives reports directly from consumers, as well as from federal, state, and local law enforcement agencies and a number of private partners. The network received 3.2 million reports in 2019, including nearly 1.7 million fraud reports as well as identity theft and other reports.

Consumers reported losing more than $1.9 billion to fraud in 2019, with nearly $667 million lost to imposter scams alone. The report indicated that scammers target consumers using every possible method of communication, with phone calls being the most common. However, a small percentage of consumers who reported they encountered a fraud over the phone said they actually lost money. When they did, the median individual loss was more than $1,000.

The FTC uses the reports it receives through the Sentinel network as the starting point for most of its law enforcement investigations and the agency also shares these reports with more than 2,500 law enforcement users around the country. While the FTC does not respond to individual complaints, Sentinel reports are a vital part of the agency’s law enforcement mission, the report stated.

You can learn more about consumer topics and file a consumer complaint online or by calling 1-877-FTC-HELP (382-4357).

Xenia Hotels, the Orlando, Florida-based company that owns the Charleston Marriott Town Center, seen here from Lee Street, is seeking to have the appraised value of the property reduced from $16.5 million to $5.8 million.

The company that owns the Charleston Marriott Town Center filed an appeal on Jan. 31 to the West Virginia Supreme Court, looking to overturn a recent circuit court ruling that dismissed its lawsuit against the county.

Xenia Hotels, the Orlando, Florida-based company that owns the Marriott, has sought to have the appraised value of the property reduced by nearly $11 million; an appeal protesting the assessment was filed with the Kanawha County Commission last year.

The county assessor’s office values the Marriott at just under $16.5 million. Xenia has told the county it believes the property’s actual value should be closer to $5.8 million, Steve Duffield, commercial real estate supervisor for the assessor’s office, told commissioners at a meeting in October 2019.

Duffield said the county receives close to $312,000 in annual tax dollars from the hotel with its current assessed value. With Xenia’s estimate, Duffield said the company would pay just over $109,000 annually in taxes; a difference of more than $200,000 in revenue for the county.

For perspective, that revenue pays nearly the entire annual salaries, just under $42,000, for five sheriff deputies, according to the Kanawha County Sheriff’s Office.

Commissioner Ben Salango said that while Xenia believes the Marriott is significantly overvalued, the company has not sent anything to the commission to back that estimate up.

“We’ve asked for numerous documents. They won’t provide us anything,” he said. “We’re not going to take their assessment at face value.”

On Jan. 2, Kanawha Circuit Judge Duke Bloom granted the commission’s motion to dismiss the case, because no one from Xenia showed up to the Oct. 10, 2019, commission meeting, where a public hearing was scheduled on the matter, according to a court filing.

Bloom wrote that state code requires the appellant, Xenia, to appear before the commissioners, who acted as the board of assessment appeals, and contest the Marriott’s appraised value.

Xenia wrote in a court filing that on Feb. 19, 2019, a company representative emailed the Kanawha County Clerk’s Office, asking when the deadline would be to file an appeal challenging the county’s assessment of the Marriott.

The next day, a representative from the Kanawha County Commission wrote back, saying the deadline to file the application to appeal would be Feb. 21, 2019, by 4:30 p.m.

Xenia sent the application on Feb. 21, according to the filing. But a representative from the county assessor’s office emailed back, saying the statutory deadline was Feb. 20, and the application was rejected.

But a public hearing was still scheduled for the matter on Oct. 10, 2019, where no Xenia representative was present.

“[Xenia] missed the deadline, and they’re trying to blame it on a secretary at the commission office, which is just ridiculous. The law, not the secretary, sets when the appeal deadline is,” Salango said.

Duffield noted Xenia can appeal the appraised value for the 2020 tax year, if the company files it by Feb. 20. 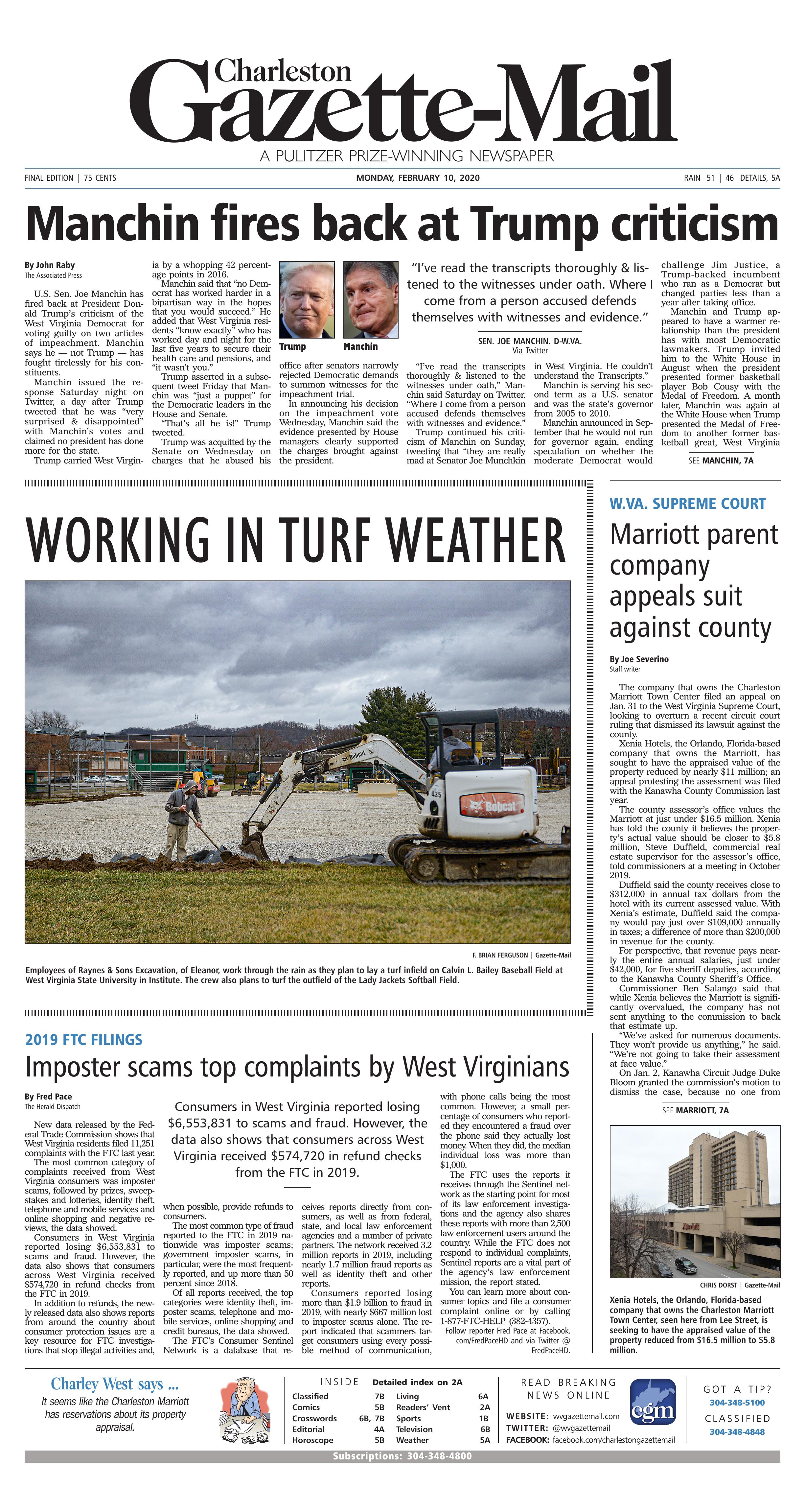