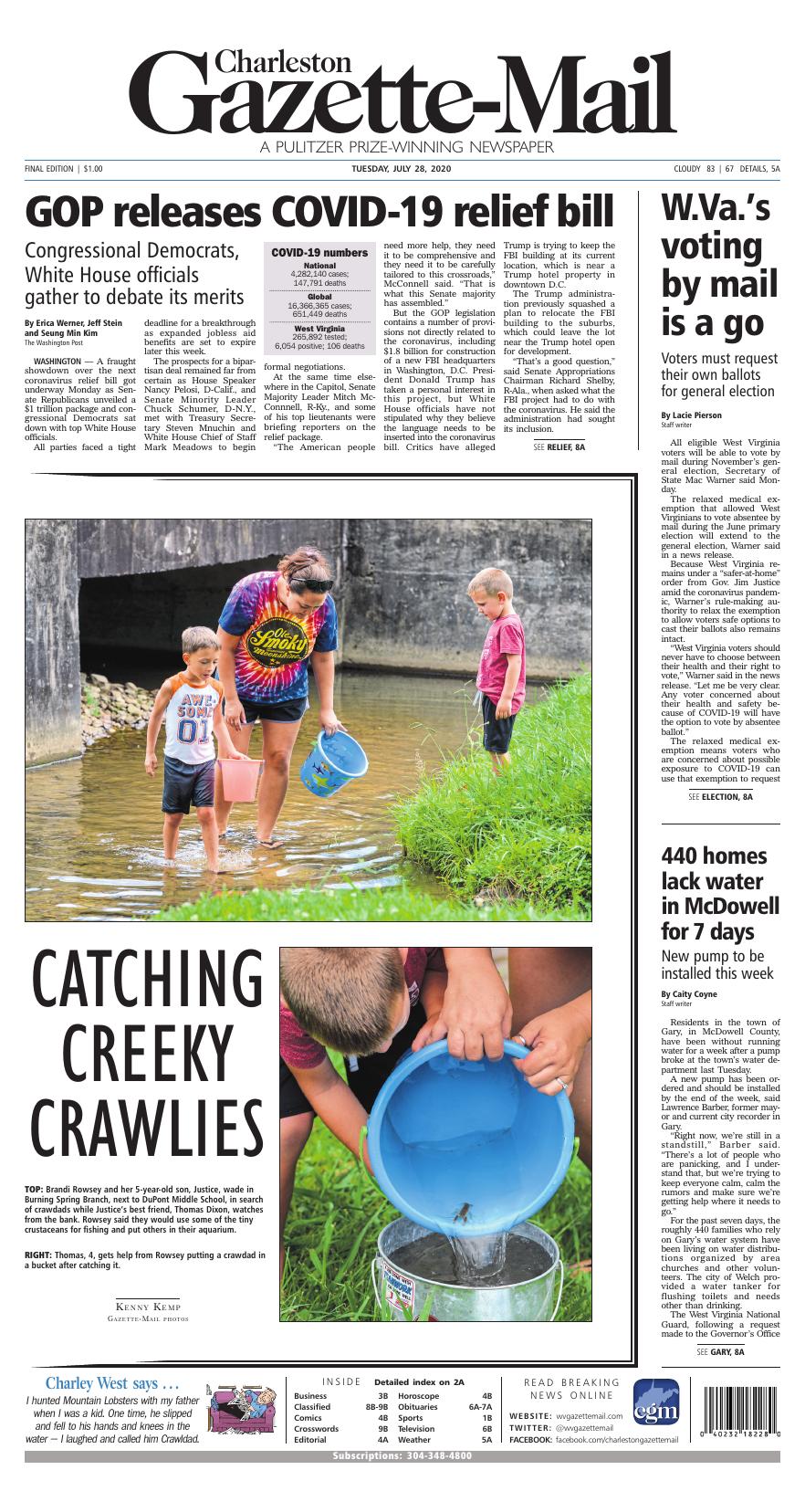 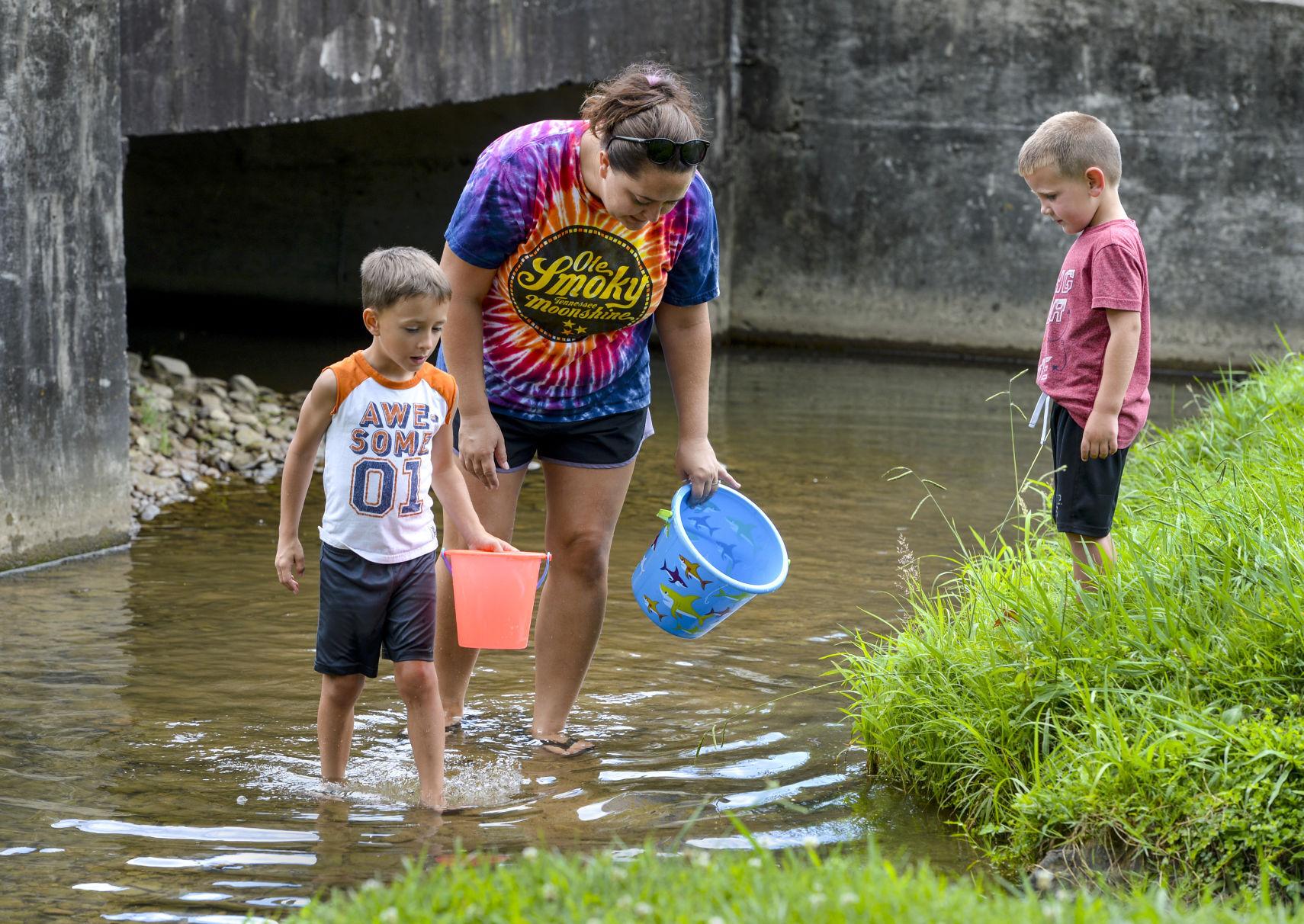 Brandi Rowsey and her 5-year-old son, Justice, wade in Burning Spring Branch, next to DuPont Middle School, in search of crawdads while Justice’s best friend, Thomas Dixon, watches from the bank. Rowsey said they would use some of the tiny crustaceans for fishing and put others in their aquarium. 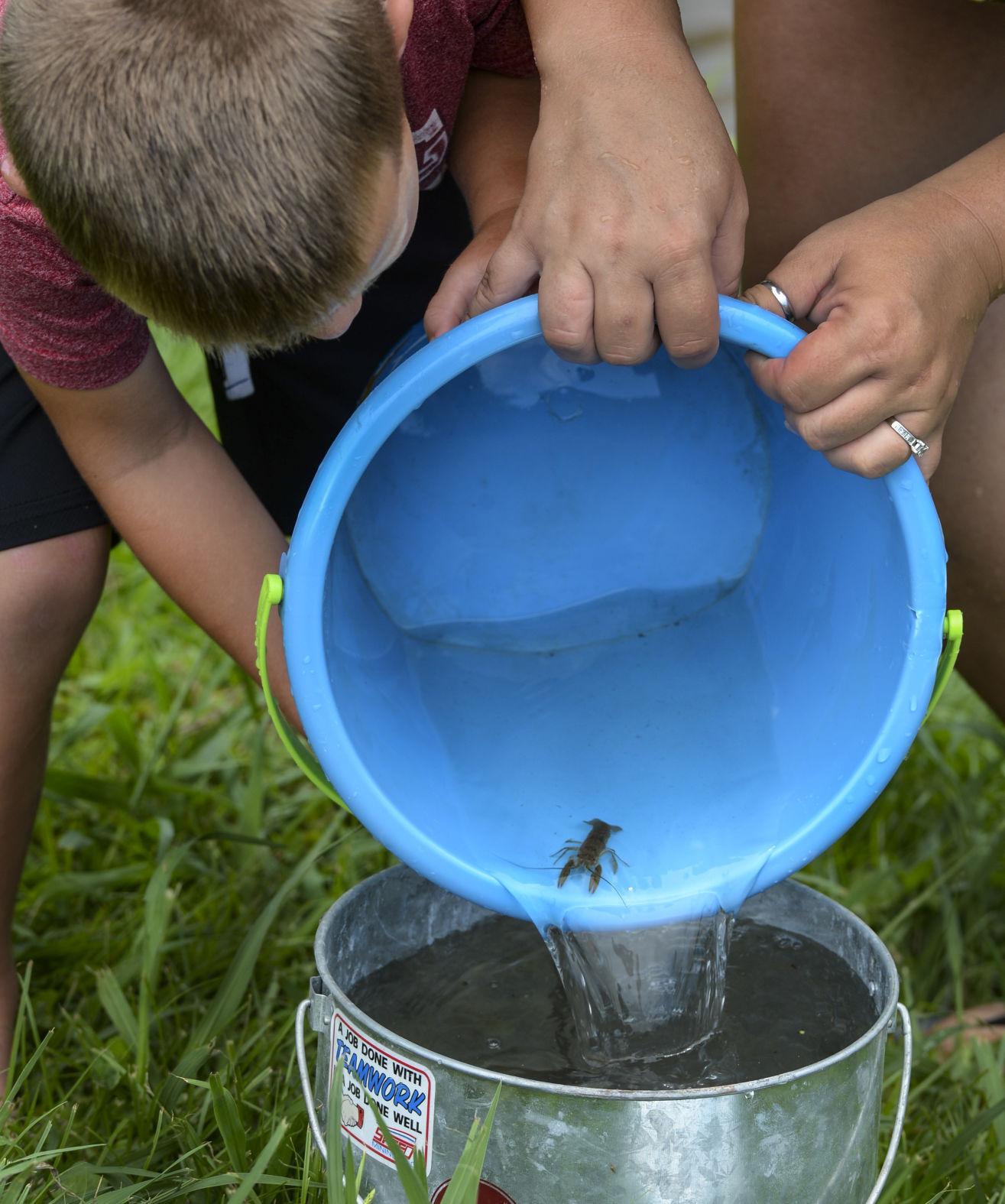 Thomas Dixon, 4, gets help from Brandi Rowsey putting a crawdad in a bucket after catching it.

All eligible West Virginia voters will be able to vote by mail during November’s general election, Secretary of State Mac Warner said Monday.

The relaxed medical exemption that allowed West Virginians to vote absentee by mail during the June primary election will extend to the general election, Warner said in a news release.

Because West Virginia remains under a “safer-at-home” order from Gov. Jim Justice amid the coronavirus pandemic, Warner’s rule-making authority to relax the exemption to allow voters safe options to cast their ballots also remains intact.

“West Virginia voters should never have to choose between their health and their right to vote,” Warner said in the news release. “Let me be very clear. Any voter concerned about their health and safety because of COVID-19 will have the option to vote by absentee ballot.”

The relaxed medical exemption means voters who are concerned about possible exposure to COVID-19 can use that exemption to request an absentee-by-mail ballot.

For the primary election, Warner’s office sent out postcards in April to every eligible voter in the state to allow them to apply for an absentee ballot. Warner said county clerks told him after the primary they would prefer the application process be handled on a local level.

To make it easier for voters to apply for an absentee ballot, election officials are introducing an Absentee Ballot Application Portal on the Secretary of State’s Office website. A countdown timer on the application page indicates it will launch Aug. 11.

During the June primary, 450,909 West Virginians, or 36.7% of the state’s eligible voters, cast ballots, according to the “West Virginia 2020 Primary after Action Report.”

Of those votes, 49.9% of ballots were cast through the mail via West Virginia’s absentee-voting process, and 40% of voters cast their ballots in person on Election Day. Another 9.4% voted in person during the state’s 10-day early voting period.

In a typical election year, about 2% of ballots cast in a primary election are absentee, according to the report.

In the report, Warner said there were issues with the U.S. Postal Service in mailing absentee ballot applications and the ballots themselves. Among the issues were election mail being held for postage and errors and delays in delivery for hand-sorted mail, which included envelopes and postcards that were disruptive in the USPS sorting machines.

County clerks told Warner that voters were concerned about the secrecy of their personal information on absentee ballot application postcards and human errors that occurred when county clerks’ employees had to decipher voters’ handwriting.

The online portal, Warner said, would help alleviate those issues.

“This remarkable tool will greatly reduce any burden on eligible voters to request an absentee ballot, assist county clerks with processing increases in absentee voting, and reduce errors and lost ballots,” Warner said.

Voters who can’t or don’t want to use the portal still can request an absentee ballot applications by contacting their county clerks’ offices by phone, email or fax, Warner said.

In the weeks since West Virginia’s primary election, Warner had said it wasn’t clear to him whether his authority to modify the absentee-by-mail voting exemptions would extend to the general election.

When the Gazette-Mail reached out to Warner’s office last week, a representative said he was working with the Governor’s Office to finalize the guidelines for the general election.

Former secretary of state Natalie Tennant, who is the Democratic Party challenger to Republican Warner in this year’s general election, said on July 20 that changing the application process between the elections would cause voter confusion.

She also said West Virginia should be requesting more funding from Congress through the CARES Act to provide resources for voting by mail and traditional voting at precincts.

“Our county clerks have done a herculean job during this crisis and they deserve to have the resources to administer elections,” Tennant said in a July 20 release.

West Virginia received a little more than $3.7 million from the federal CARES Act, which Congress passed in April, to conduct its election. Congress allocated $400 million as emergency election funds made available to states through the guidelines of the Help America Vote Act.

During a congressional hearing last week, Warner said West Virginia spent $1.6 million of its CARES Act money on the primary election and has about $2.1 million to use for the general election.

West Virginians have until Oct. 11 to register to vote in the 2020 general election.

Residents in the town of Gary, in McDowell County, have been without running water for a week after a pump broke at the town’s water department last Tuesday.

A new pump has been ordered and should be installed by the end of the week, said Lawrence Barber, former mayor and current city recorder in Gary.

“Right now, we’re still in a standstill,” Barber said. “There’s a lot of people who are panicking, and I understand that, but we’re trying to keep everyone calm, calm the rumors and make sure we’re getting help where it needs to go.”

For the past seven days, the roughly 440 families who rely on Gary’s water system have been living on water distributions organized by area churches and other volunteers. The city of Welch provided a water tanker for flushing toilets and needs other than drinking.

The West Virginia National Guard, following a request made to the Governor’s Office by Delegate Ed Evans, D-McDowell, brought 400 gallons of water to the city, but it’s still not enough, Barber said

“We’re grateful, but we’re down to just 100 gallons left. We’ve got 800, 900 people here we’re providing for, and that just isn’t going to cut it,” Barber said. “We’ve gotten a lot of help from former residents, people in North Carolina that used to live here have hauled tons of water up. I think it’s more than the state has done.”

All of this is happening in the midst of the COVID-19 pandemic, and while water issues are not new for Gary residents — or others in McDowell County — the current circumstances mean more could be at stake.

“I’m working every day; I’m constantly in contact with other people, and I can’t come home and even wash my hands, much less jump in the shower,” said Grayson Pendry, who has lived in Gary for about seven years. “It’s dangerous. It’s not right.”

Pendry has four children, ages 6, 7, 9 and 12. Since the water has been out, they’ve been staying with grandparents in War and Welch, Pendry said.

“My children are my main concern and, luckily, I could get them out of here, but not everyone has that option,” Pendry said. “We’ve got a lot of older folks up here. Some can’t leave their homes, and especially right now [with a pandemic]. I worry most about them and the children.”

A nursing home in Gary houses about 100 elderly residents, Barber said. They’re out of water, too, and while bottled water has been bused up to the facility, local leaders are facing a shortage of sanitizing wipes and other supplies to ensure those living there are as protected as possible from COVID-19.

Outside the nursing home, a majority of Gary’s residents are over the age of 60, meaning they’re especially vulnerable to COVID-19. Without water, Barber said, there is no way for people to follow sanitation guidelines, like regularly washing hands, that are meant to lessen their risk of contracting the virus.

“That is a real concern for folks, and they’re right to be concerned,” Barber said.

Water service issues are not a new phenomenon in Gary. The water and sewage systems were installed more than 50 years ago, before Gary was a town and when U.S. Steel Corp. owned all the land and property in the region.

“They ran the water, picked up the trash, painted the houses — anything you needed was done by U.S. Steel,” Evans said. “That was the case for a long, long time.”

Then, in the 1960s, coal production throughout the region slowed. Coal companies large and small filed for bankruptcy. In 1970, U.S. Steel joined them, taking with it the skilled workers and resources needed to continue servicing those it left behind.

For the past 20 or so years, challenges with the water and sewage systems in Gary have only grown, Barber said.

The Pendrys have experienced them firsthand since they moved to the town seven years ago. Their sewage system regularly overflows, sometimes into the yard around their house. Their neighbor, Tina Coleman, had her basement flooded with raw sewage just a few years ago.

The water, Pendry said, is no better — even when it is running. It smells like raw sewage, he said, and usually runs out the faucet in different shades of brown.

“If you fill up the bathtub, you’ve got to leave the room for the smell to clear,” Pendry said. “Who wants to bathe in that, in something that smells like — sometimes even looks like — sewage? We can’t drink it, can’t put our kids in it, and we still pay for it.”

Gary’s water system is made up of corroded steel pipes, Barber said. The sewage system — which is slowly crumbling beneath the town — is made of terracotta pipes. Neither are cheap to upgrade or replace.

A project was approved years ago by the West Virginia Infrastructure and Jobs Development Council to replace Gary’s entire sewage system, but it has to yet to start, as funding for such projects in the state is sparse. Most projects are paid for by small water systems or municipalities taking out large loans to pay for necessary infrastructure improvements.

But interest on those loans can be hard to pay off as customer bases shrink, leading to less money coming in from bills, which, for most small water systems in the state, are the only income source.

Gary runs on an annual budget of about $800,000, Barber said. Average cash on hand for the city is about $120,000. The new water pump for the system — an emergency repair — cost $30,000 and was covered by money from the McDowell County Commission and the Economic Development Authority.

If the town had to pay for that, Barber said, they’d be at a loss for the rest of the year.

“That’s a quarter of our budget right now, and it’s an emergency, but what happens when there’s another emergency?” Barber said.

Evans said the state needs to step up and find a way to help towns like Gary — and neighboring Keystone, Pageton, Anawalt and others — improve their water and sewage infrastructures for the good of all West Virginians. Year after year, he said, he watches as his fellow legislators and the governor fail to propose and pass legislation to better the state’s water infrastructure.

Year after year, too, the price of water infrastructure improvements also rises.

“We can’t continue with this, it’s not right and it’s not safe,” Evans said. “We need to change for the better.”

For the past week, politicians from across the state who are currently running for election have been coming to Gary, dropping off water and meeting with residents. Barber said he appreciates the help — everyone in Gary does — but he urged people to remember that this is not a one-time thing.

“Where are they the other 364 days of the year? We always need help down here, and rarely do people bring it. We provided enough coal to keep West Virginia — the United States — powered, but when we need it, we only get help if it benefits the person bringing it,” Barber said. “It’s not fair. We deserve better, we need better.” 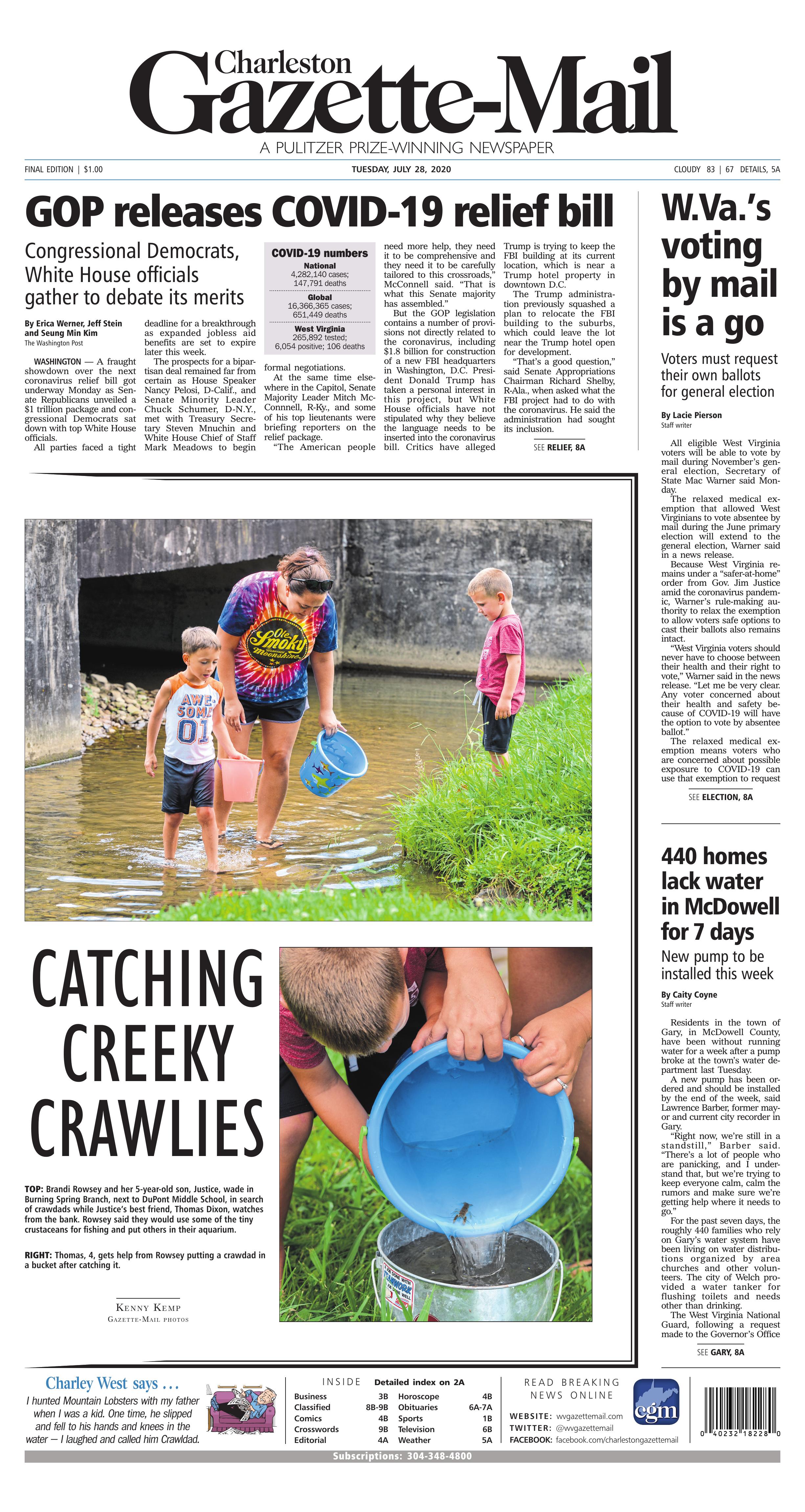