With a population loss of 3.2% over the past decade — the highest of any state in the nation — U.S. Census officials confirmed Monday what most had expected: West Virginia will lose a seat in the House of Representatives in the 2022 election.

During a news conference on 2020 Census Apportionment, U.S Census officials said West Virginia is one of seven states to lose a congressional seat, along with California, Illinois, Michigan, New York, Ohio and Pennsylvania.

Population loss was negligible in the other states, with Mississippi losing 0.2% of its population, while Illinois lost 0.1%.

Utah was the fastest-growing state, increasing its population by 18.4%.

According to the census data, West Virginia’s population dropped by 59,278 in the past decade, falling to a total population of 1,793,716.

Among growing states, Texas will gain two House seats, while Colorado, Florida, Montana, North Carolina and Oregon will each gain one. That confounded many projections, which had Texas gaining three seats and Florida adding two.

For West Virginia, the apportionment will mean legislators will have to eliminate a congressional district during redistricting for the first time since 1991, when population loss reduced the state’s congressional delegation from four members to three.

Harley O. “Bucky” Staggers Jr. was the odd man out in that redistricting, being drawn out of the 2nd District and forced to run against Rep. Alan Mollohan, D-W.Va., in the 1st District, where he lost in the May 1992 primary election.

With only two congressional districts remaining, redistricting will be comparatively easier in 2021, since the only options will be to separate the districts either horizontally or vertically.

All states surrounding West Virginia experienced population growth in the past decade, with growth rates ranging from 7.9% in Virginia to 2.3% in Ohio.

California remains the largest state, with 39.53 million residents, while Wyoming is the least-populated state, with 576,851 residents. 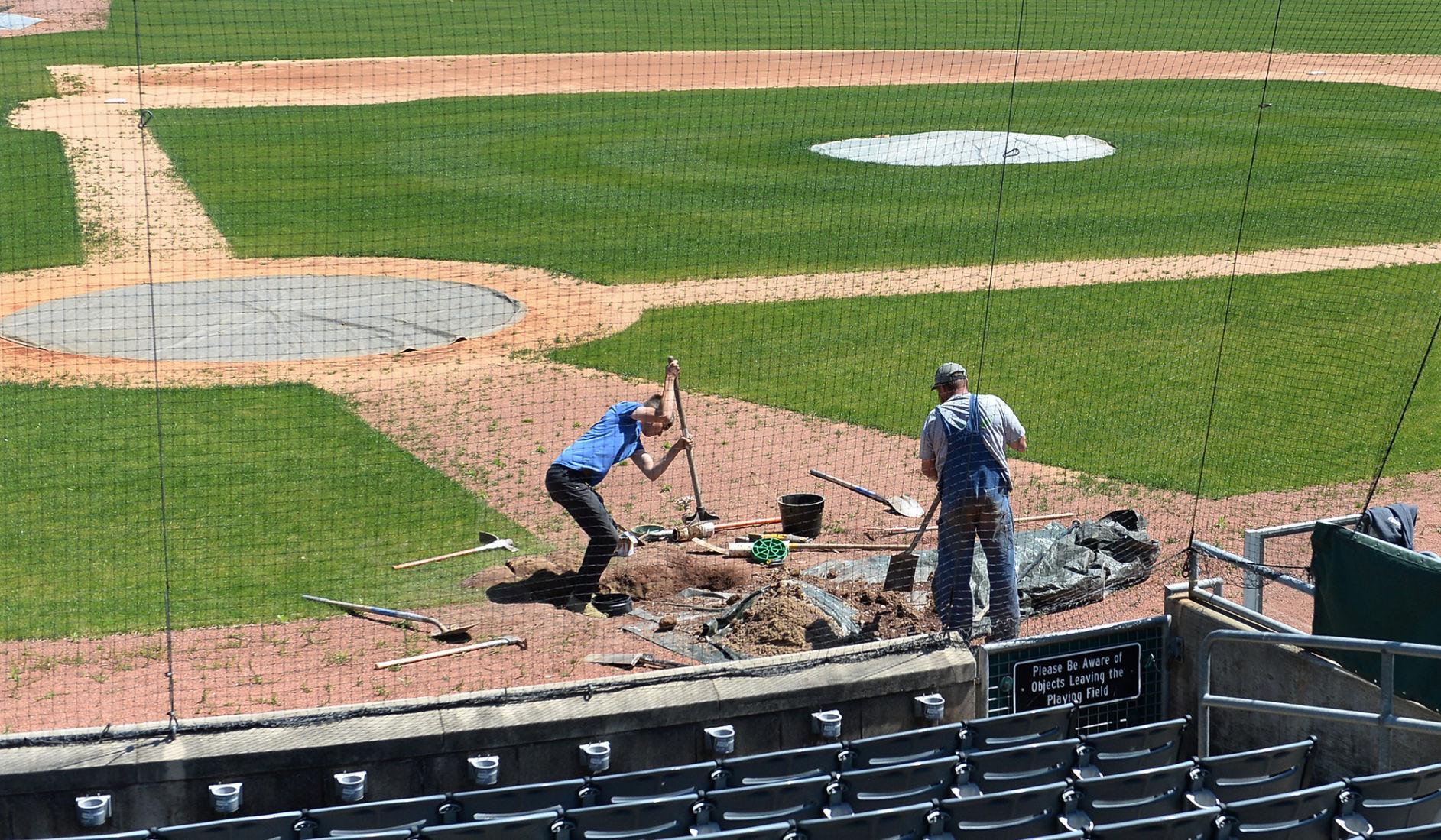 Caleb Justice (left) and Steve Leftwich, of Valley Gardens, fill a hole with dirt Monday after replacing a sprinkler valve on the field at Charleston’s Appalachian Power Park. The West Virginia Power, which recently joined the Atlantic League, opens the season at home on May 28 against the Southern Maryland Blue Claws.

West Virginia provided state-funded pre-kindergarten last school year to a greater percentage of 4-year-olds than most states did, according to an institute at New Jersey’s Rutgers University that has ranked the state highly in the past.

With 68% of 4-year-olds enrolled in the “universal” pre-K system, West Virginia ranked No. 6 in the nation, according to the National Institute for Early Education Research.

“The shining light in our entire education system is our universal pre-K,” state schools Superintendent Clayton Burch said during a news conference with the institute.

But the institute has expressed concern nationally about the COVID-19 pandemic’s impact on preschool enrollment. Burch said he’s concerned, too.

A West Virginia Department of Education official previously said that, amid the statewide public school enrollment drop last fall, compared to the previous fall, about 4,000 fewer students were enrolled in state-funded pre-K.

The following figures are all from the institute’s “State of Preschool” report, published last week. This data is from last school year, most of which was over before the pandemic triggered classroom closures.

West Virginia offers free pre-K to all 4-year-olds. The state also offers it to all 3-year-olds with special needs.

Still, most other states enrolled so few 3-year-olds that West Virginia’s 6% was enough to rank it about 15th nationally.

West Virginia’s Republican-dominated Legislature and Republican Gov. Jim Justice passed a law this year that is estimated to increase annual state spending on education by about $103 million. But that money won’t go to offering free pre-K to 3-year-olds without special needs. Instead, that money is for the new school vouchers program, called the Hope Scholarship, to provide families with money for private- and home-schooling their children — at ages when they already have access to free public schools.

The law says only families with kindergarten-age children, not pre-K-age children, will be eligible to start receiving these vouchers.

The Rutgers report praises West Virginia not just for its percentage of 4-year-olds enrolled, but also for the quality of its state-funded pre-K. The institute said West Virginia is among 13 states whose programs meet at least nine of the institute’s 10 quality benchmarks.

“Less than 9% of children enrolled in state-funded preschool attend a program that meets nine or 10 quality standards benchmarks, leaving too many children in programs that do not meet the minimum standards for preschool quality,” the report says.

Also, the report says West Virginia is one of just four states, plus D.C., that “fund their programs at a level that could support a full-day, high-quality program paying teacher salaries comparable to K-12.”

“I am truly honored by Gov. Justice’s appointment of me to Judge Tod Kaufman’s former position,” Ballard said in a news release Monday. “I want to thank Judge Kaufman for his countless years of service, and I will strive to continue his distinguished legacy for the citizens of Kanawha County.”

Ballard graduated in 2001 from the David A. Clarke School of Law at the University of the District of Columbia. He is a 1997 graduate of Marshall University and has practiced law in West Virginia for 20 years.

“I am appreciative to the Judicial Vacancy Commission for selecting me for nomination,” Ballard said. “Finally, thank you to everyone who supported me through the appointment process.”

Ballard was one of 12 local attorneys who applied to replace Kaufman, 68, who submitted his resignation to Justice on March 8 after more than 32 years serving as circuit court judge.

In his free time, Ballard is a youth softball coach and a volunteer with the Boy Scouts of America. He and his wife, Allison, live in Charleston with their three children.

Gov. Jim Justice announced Monday the first of several initiatives to encourage the estimated 588,000 eligible West Virginians who are hesitant to get vaccines to get their COVID-19 shots: $100 U.S. savings bonds to all residents ages 16 to 35 who get vaccinated.

Justice said during Monday’s COVID-19 briefing that he opted for savings bonds instead of cash to play to a potential sense of patriotism among younger West Virginians.

“The people that need to step up are our young folks, and I know they’re going to do it,” said the governor, referencing the current trend of spread of COVID-19 variants predominately among ages 10 to 35.

Justice said he’s hoping that 275,000 of the roughly 380,000 nonvaccinated West Virginians ages 16 to 35 will take him up on his offer, which he said will be funded using unexpended federal CARES Act pandemic stimulus funds.

Reaching that goal, the governor said, would push statewide vaccination rates above 70%, the threshold health experts believe would permit the state to drop mask-wearing and social distancing mandates.

According to the Department of Health and Human Resources COVID-19 dashboard, 37.9% of West Virginians ages 16 and older are fully vaccinated.

Given the current reluctance among many West Virginians to get vaccinated, Justice said that, without incentives, “We’re going to be faced with wearing these masks that nobody likes for a long, long time.”

According to the State Auditor’s Office, as of April 20, more than $615 million of the $1.27 billion of CARES Act funds directed to the state remain unspent.

The governor on Monday erroneously stated that reaching the goal of 275,000 savings bond participants would cost the state $27.5 million. Actually, Class EE savings bonds sell for half of face value, and mature to face value in 20 years, which would put the total cost to the state for 275,000 $100 bonds at $13.75 million.

Justice said he thinks savings bonds will be more meaningful to recipients than cash payments.

“A hundred dollars will get gone just like that,” he said. “I want our young people to see and understand they’re doing something important.”

The governor said Monday that he will be announcing other initiatives to encourage the vaccine hesitant to get their COVID-19 shots, part of a program he has dubbed “Beat 588 Bad.”

Other possibilities, he said, include mobile vaccination vans, as well as vaccination clinics at fairs and festivals and sporting events; at state, national and county parks; and at bars, restaurants and shopping centers.

Statewide vaccination rates have plummeted in April, as numerous national surveys show that Republicans, evangelical Christians and residents of rural areas have the highest levels of vaccine hesitancy.