Prescription painkillers played a major role in fatal overdoses in Huntington and Cabell County over a two-decade period, an epidemiologist said Thursday at the federal opioid trial in Charleston.

Huntington and Cabell County accuse the “Big Three” drug wholesalers — AmerisourceBergen, Cardinal Health and McKesson — of fueling the opioid epidemic by sending excessive shipments of opioids into the area for eight years, before a reduction in the number of pills shipped made users turn to illicit drugs.

The defendants point to the U.S. Drug Enforcement Administration, doctors and West Virginians’ poor health as the culprits.

Gordon Smith, an epidemiologist at the West Virginia University School of Public Health, was the first of his field to take the stand Thursday. Smith has focused his work on studying overdoses and other drug poisonings. He joined WVU in 2016 to study the opioid epidemic.

For this trial, he was asked to review the crisis and its evolution in West Virginia, specifically Cabell County. For his findings, he used two databases: the 2001-18 fatal overdose data from the vital statistics office and the 1979-2018 drug poisoning data from the U.S. Centers for Disease Control and Prevention.

He said he found that the rural drug problem is very different from what is seen on a national level.

Based on preliminary data for 2019-20, Smith said it seems the main drivers now are heroin and fentanyl, although most of the deceased are found with multiple drugs in their system.

A study looking at 2006 data said pharmaceutical diversion was associated with 186 deaths (63%), while 63 accidents (21%) showed evidence of doctor shopping. Substance abuse indicators were found in 279 deceased people (94%) and multiple substances were found in 234 deaths (80%).

While the defendants have held that West Virginians needed more opioid pills because of a history of bad health and laborious jobs, the study showed that the most illegal diversion of opioids was seen among the 18-24 age range, when residents were at their prime.

McKesson attorney Laura Wu countered that the study Smith used had incomplete data and was not a reliable source. She said the same study did not examine where the opioids had been obtained, but the majority of people using illicit drugs reported receiving the drugs for free from a friend or relative to whom it was prescribed.

The West Virginia Overdose Fatality Analysis released in 2016, 10 years after the aforementioned study, said the West Virginia Board of Pharmacy’s Controlled Substance Monitoring Program showed 91% of all deceased individuals had a prescription history.

Of those, 49% of women and 36% of men had filled a controlled substance prescription in the month prior to their deaths.

His report also counted a fentanyl-related overdose as a prescription until 2013, she said. Smith said 2013 is when the CDC reported that illicit fentanyl abuse had exploded across the country, so, prior to that, he counted it as prescribed.

Before the epidemiologists took the stand Thursday, Joe Rannazzisi, head of the Office of Diversion Control for the DEA from 2006-15, finished his testimony. He was asked questions by AmerisourceBergen attorney Robert Nicholas.

Rannazzisi said over three days of testimony that the distributors ignored their duties to report suspicious orders as part of a nationwide systemic problem, which could have guided them in stopping opioid pills being illegally diverted as they flowed into local communities.

The DEA and AmerisourceBergen had a great relationship before Rannazzisi’s era, Nicholas said. From 1998-2005, the company let DEA members train at their facility, he said, but, when Rannazzisi took his position in the DEA, the relationship crumbled as he changed policies and the regulator’s expectation of the distributors.

Nicholas referred to a memo that followed the meetings in which an AmerisourceBergen employee said the DEA gave him information about a pharmacy the company needed to investigate for illegally diverting pills. Rannazzisi said it would have been done in error, because it would violate the due process each registrant has.

“It’s not in line with what the DEA would do,” he said.

The defendants argued that the DEA never gave them access to the agency’s pill ARCOS database (Automated Reports and Consolidated Ordering System), but Rannazzisi said the argument was a “smokescreen” and an attempt to shift the blame elsewhere.

DEA presentations to the distributors have said the agency takes its investigative obligations seriously because it takes just one criminal physician to do enormous harm and line the pockets of people with opioid use disorder. 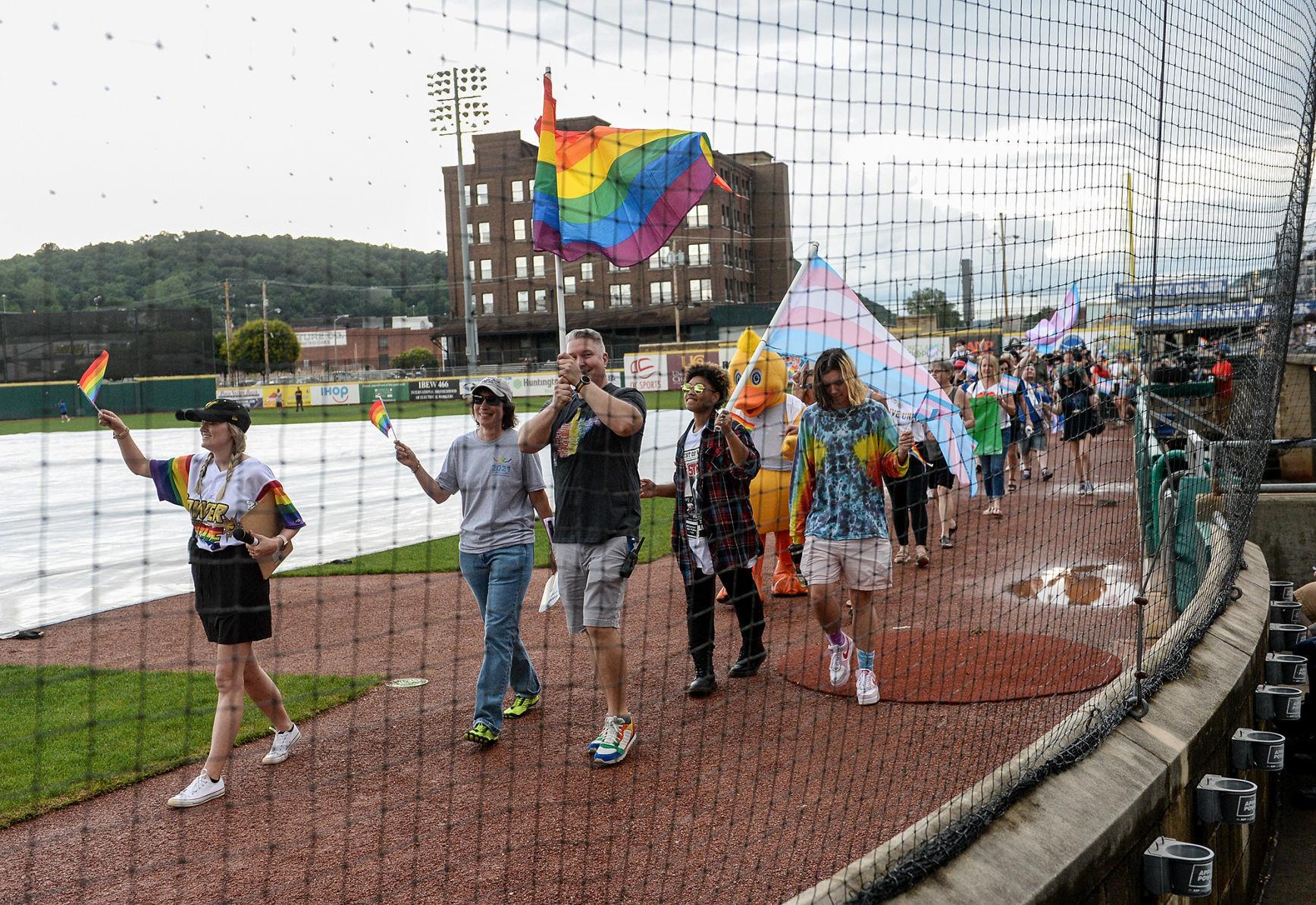 People parade through Appalachian Power Park in Charleston for Pride Night before the West Virginia Power’s game against the Lexington Legends was set to begin Thursday night. The game and the celebration were postponed due to rain.

Gregory Winter speaks at the public hearing Wednesday night in South Charleston on Appalachian Power and West Virginia American Water seeking a $50 million increase in utility rates. “I say enough is enough,” Winter said. “Year after year after year, every utility company says, ‘We need a raise. We need a raise to fix our water lines that are leaking. We need a raise to cut the trees off our power lines.’ Well, this is abuse by the water company and the power companies for years.”

South Charleston Mayor Frank Mullens sits in the front row during a public hearing with other area residents at the LaBelle Theatre, in South Charleston, Wednesday evening.

Some Kanawha County residents said they may soon be tapped out from using their taps and priced out of power.

“We don’t even wash our own cars at our house right now, because of the water bills,” Diana Arden said. “And my concern is, where do we get to the point that we just turn off our water and we don’t use our water, or we use gas, instead of using the power, and use our generators?”

In December, Appalachian Power — a subsidiary of American Electric Power — submitted a proposal to the West Virginia Public Service Commission to increase annual revenue by nearly $50 million, done by way of average monthly bill hikes of $5.26 for residential customers, $12.37 for commercial customers and $5,686 for industrial customers.

The numbers represent increases of 3.71%, 3.52% and 2.92%, respectively. The company said the increases would bring rates into alignment with infrastructure upgrade costs more gradually than what the utilities would ask for in a base rate case.

Last month, West Virginia American proposed water and wastewater rate increases that would result in a bill increase of $11.26 per month for the average residential water customer. The change would result in an additional revenue of $40.8 million.

The new increases, while appearing minor to some, would push some utility bills into a territory many West Virginians say they cannot afford.

Pam Nixon, a South Charleston resident, said the rate increase is troubling when income increases are few and far between.

“Anybody who is on a fixed income, we have to budget for our water, our electric, our house payment, our rental insurance, maintenance on our cars,” Nixon said. “All of that comes out of our money. I haven’t gotten a 10% increase in my salary, or maybe not even a 3% increase.”

Jamie Pierce, a Dunbar resident, was laid off from her job in the automotive industry during the COVID-19 pandemic. Currently in her 40s, Pierce opted to return to school, in hopes of securing better employment.

“My husband’s the only one working in the home. Thank God, our house is paid for, but we still have 20-some years to work before we’re at your age and retired, if we can even retire,” Pierce said as she gestured toward the crowd.

“This is really going to hurt us. I may even have to drop out of school, just for this little bit of a hike, because we’re only living on one income with our children in the home. It’s not just hurting the elderly population, it’s hurting everybody.”

Gregory Winter voiced frustration with the process, as well, expressing his belief that utility companies are asking for rate hikes because of negligence.

“If they would trim their trees every year, like they’re supposed to, we wouldn’t have power outages all the time,” Winter said, to applause.

Winter spoke about a time when he returned home from a trip to find that his water tank had busted — an expense he was on the hook for.

“They don’t pay for our damage to our homes,” Winter said. “Why should we have to pay for their damage every time they turn around and abuse it?”

Charleston resident Rose Lowther said, “It’s too much, and this is totally the wrong time for the people in this area.”

A Virginia banking company has vowed it will get the money it says Gov. Jim Justice owes it.

In a filing with federal securities regulators Monday, Carter Bankshares, Inc., a longtime banking partner of Gov. Jim Justice and his companies, defended itself against their federal lawsuit alleging that it induced them into loan defaults.

Carter Bankshares, Inc. called the allegations in the lawsuit filed in the U.S. District Court for the Southern District of West Virginia last week “false and misleading,” saying it worked cooperatively with Justice-controlled companies in restructuring and extending loans after it told the companies it aimed to reduce its credit exposure to them about five years ago.

“Banks have an obligation to their shareholders and the financial system to collect in full all amounts that are due and owing to them,” the company said in the Securities and Exchange Commission filing. “Carter Bank is no different from any other bank in this regard.”

Justice, his wife Cathy, and their son, James “Jay” Justice III, and 11 family businesses, including The Greenbrier Hotel Corp. and Greenbrier-related sports and recreation entities, are seeking at least $421 million in damages from Carter Bank & Trust and a declaratory judgment that would keep the bank from forcing the Justices to immediately pay the full sum of the loans without providing them “a good faith opportunity to repay those loans.”

The Justices said in their lawsuit that they have $368 million of outstanding loans with Carter Bank and have paid down $407 million of debt and $238.5 million in interest and fees since 2001.

The lawsuit alleges that Carter Bank has been the Justice companies’ “near exclusive financing provider” that demanded that their loan balance be converted from 20-year to short-term notes after the bank’s founder died in 2017 and induced them into defaulting.

The lawsuit was filed May 31, the same day that The Wall Street Journal reported that Justice was in talks with Swiss-based Credit Suisse for the company to recoup almost $700 million following the downfall of U.K.-based Greensill Capital, which loaned Justice family companies $850 million in May 2018.

Credit Suisse had provided money to Greensill before Greensill filed for bankruptcy in March after it lost key insurance coverage that provided back-up for its loans.

Carter Bankshares, the bank holding company for Carter Bank, contended in its Securities and Exchange Commission filing that the lawsuit’s timing was no coincidence, saying the loans of two Justice companies were due to be repaid in full to the bank the next day.

“Carter Bank will vigorously defend all claims asserted in the Lawsuit and expects to collect in full all amounts due,” the company said in the filing.

Neither the Justice companies’ attorney nor the Governor’s Office could be reached for comment.

The Justice company lawsuit against Carter Bank followed a lawsuit that a Justice coal company filed in the U.S. District Court for the Southern District of New York in March accusing Greensill of a “continuous and profitable fraud” enacted “under the guise of establishing a long-term financing arrangement.”

Justice said he would put his children in charge of his family’s business operations upon becoming governor in 2017.