The West Virginia Board of Education approved policy changes Wednesday that allow for fully online charter schools, enable an unelected board to circumvent county boards of education to open charters and open the door to 10 new charters every three years, up from three every three years.

The school board also said public school children don’t need at least a 2.0 grade point average to currently start extracurricular practices, including sports practices and conditioning. Board president Miller Hall cited the coronavirus pandemic’s social, emotional and academic effects on students. The board said it will discuss at its Aug. 11 meeting whether to waive the 2.0 requirement for the fall semester, including for games. The state also waived that requirement this past spring.

On the charter school policy changes, Debra Sullivan was the only “no” vote out of the nine board members. Daniel Snavely was the only member absent; he said he left the room to take an emergency call.

The Republican supermajority in the West Virginia Legislature and Republican Gov. Jim Justice passed a law this year, House Bill 2012, to make these changes regarding charters.

The West Virginia Supreme Court wrote in a 2017 ruling that “this Court has unequivocally held that legislative action that impedes the general supervisory powers of the [state school board] is patently unconstitutional.”

Board member Stan Maynard noted Wednesday that the board had, starting in January, mandated that public schools offer some amount of in-person learning in response to problems with online education. Yet, he noted, the policy changes were opening West Virginia to fully online charters.

“I just have a concern that we’ve opened Pandora’s Box and somebody can step through,” Maynard said.

It was unclear Wednesday what specific regulations made it into the final version of the charter policy.

Unlike for most other policies, the proposed final version wasn’t attached to the board’s meeting agenda that was published days before. State education officials provided the Gazette-Mail with a print copy of the final version after the board approved it Wednesday afternoon.

The Department of Education, which the board oversees, did provide a written summary Wednesday of the changes it says were made in the final version based on comments received during a public comment period. That comment period, during which a draft of the proposed changes was published, ran from early June to Monday.

The final version adds that groups applying to open fully online charters must provide a timeline for “identifying students who are consistently not engaging in learning activities” and supporting them to “consistently engage.” The draft policy changes had proposed requiring applicants to submit a “process” for identifying this lack of engagement and addressing it, but those initial proposals didn’t require a timeline.

The final version of the policy still doesn’t specify when fully online charters must send back to in-person schools students who still continue not to engage in online learning.

Charters, like county school systems, are largely funded based on enrollment, so they are financially incentivized to retain students, even when the school isn’t working for them.

Charter schools may be opened by nonprofits, if county school boards or the new state charter approval board authorize them to open. But they may be run day to day by private companies.

Also added into the final version of the policy is a requirement that, if selected, charters must take part in the National Assessment of Educational Progress. Often abbreviated NAEP, it’s the biggest nationally representative test of U.S. students, and its results are sometimes useful to researchers and can help with rough state-to-state educational comparisons. 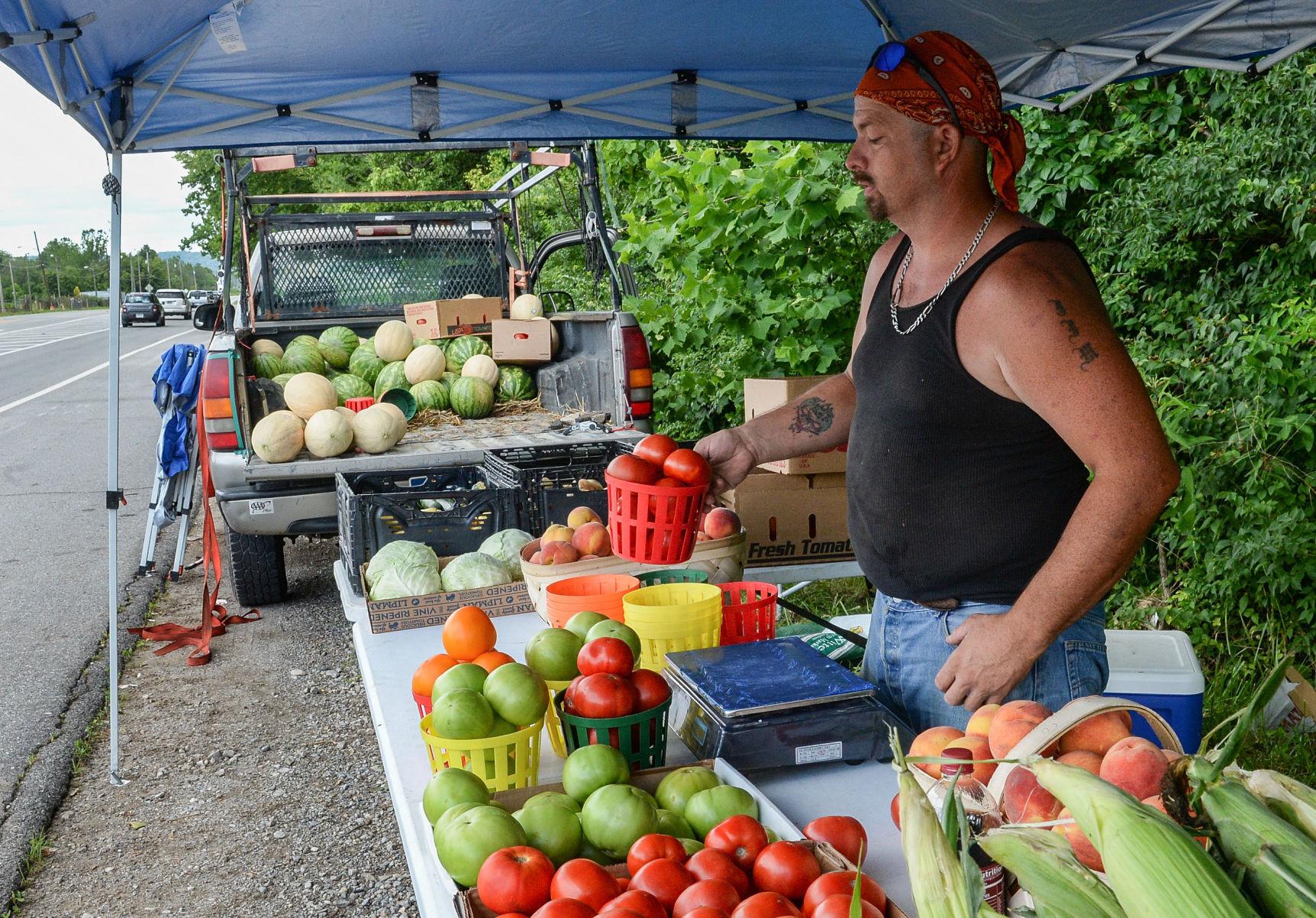 Jim Shafer, of Hamlin, sets out fruits and vegetables for sale at his produce stand next to W.Va. 25 in Institute this week. He said he and his father, Franklin Cooper, who has a stand in Eleanor, have been selling from stands for 15 years.

In an email to authority staff last week, Lynch cited his health and the pandemic “winding down” as reasons for his departure.

“I greatly appreciate the time I have spent at KCEAA and all the friends and associations I have made over the years,” Lynch wrote. “I am thankful for all of you and our board for giving me great opportunities to grow as a person and as a professional. I wish each of you a bright future and thank you for not only your friendship but for all the hard work we have accomplished to move KCEAA forward.”

Lynch started working for the ambulance authority 42 years ago, starting as an EMT and working his way up to his current role as director, he wrote.

His Linkedin profile indicates he’s been executive director of the agency since 1990. He did not return a call seeking comment.

In his letter to staff, Lynch wrote that he’d recommend to the board of directors that deputy director Monica Mason be his replacement.

“She is dedicated to move KCEAA into the future and, above all, loves all our employees,” Lynch wrote. “She is one of the hardest working people I have ever met. She has compassion to move KCEAA onward and the energy to support quality patient care for the citizens of Kanawha County.”

Mason will assume of the role of interim director until the agency’s board formally hires for the position, she said.

She said Lynch has been a “huge part” of the community and the state’s emergency medical services community.

“He’s been very instrumental in bringing a lot of legislation to the state of West Virginia in regards to EMS,” Mason said. “He was a huge, integral part in what is now EMS in West Virginia. He’s really been a great asset, not only to the Kanawha County Emergency Ambulance Authority in those 42 years but EMS as a whole.”

Kanawha County Commission President Kent Carper called Lynch a good friend who dedicated his entire career to the county and the ambulance authority.

The Public Service Commission of West Virginia is down a member.

The three-person panel charged with regulating utilities across the state is a party of two for now, after Brooks McCabe’s term expired June 30, leaving the commission shorthanded as it considers cases that will decide how much ratepayers must pay for infrastructure upgrades proposed by large utilities, such as Appalachian Power and West Virginia American Water.

McCabe’s departure will not affect the ability of the commission now consisting only of Chairman Charlotte Lane and Commissioner Renee Larrick to render decisions and issue orders, commission spokeswoman Susan Small said in an email.

Commissioners are appointed to six-year, staggered terms by the governor, with “advice and consent” of the Senate, per state statute. Any new commissioner appointed by Gov. Jim Justice may begin to serve as soon as they are sworn in, with the Senate taking up the confirmation once it is back in session, Small said.

McCabe, 72, of Charleston, was appointed to the commission by then-Gov. Earl Ray Tomblin in November 2014 to fill the unexpired term of former Commissioner Ryan Palmer, who resigned to take a post with the Federal Communications Commission. McCabe resigned from the state Senate, where he served as a Democrat for 16 years, to take the commission post.

McCabe was the only commissioner not appointed by Justice.

Some past commissioners have stayed on the panel past the expiration of their terms until their successor was appointed. But McCabe, managing member of the real estate firm West Virginia Commercial, left on time to spend more time with his family, compile a 250-year economic history of Charleston and advocate more for government consolidation.

“The time is right,” McCabe said.

He added that he is well aware that he leaves the commission at a dynamic time for utilities in West Virginia and predicted that the rapid rise of renewable energy and what he calls a “massive” need for infrastructural upgrades will make the next three to five years especially critical, given the state’s steep economic and topographic challenges.

He said he has seized the opportunity to spend more time with his two grandchildren, ages 8 and 6, and aims to “stir the pot” in favor of municipal and county government consolidation, which he views as a desperately needed step toward economic growth in West Virginia’s population centers.

“[If] we want to divide everything up and split everything 55 different ways, we are doing a disservice,” said McCabe, a former Senate Economic Development Committee chairman, referencing West Virginia’s 55 counties. “It’s very, very hard to get the community and the Legislature to do tough things that are necessary.”

For the second quarterly meeting in a row, the Capitol Building Commission on Wednesday stonewalled on the matter of the Stonewall Jackson statue and bust on the West Virginia Capitol grounds.

The statuary was not on the commission agenda for a second meeting in a row since the commission held a public hearing on it in December, when seven of eight speakers called for removing the statue from the southeast corner of the Capitol complex and the bust from the Capitol Rotunda.

Two days before that public hearing, Virginia Military Institute removed the duplicate of the Capitol’s Stonewall Jackson statue from its grounds. Last weekend, the city of Charlottesville, Virginia, removed three Confederate statues from town squares, including one of Jackson.

Calls to remove the Jackson statue at the West Virginia Capitol date back a decade, but they intensified last summer as part of a wave of Confederate memorial removals across the South during protests against the death of George Floyd at the hands of Minneapolis police in May 2020.

To date, neither the Legislature nor Gov. Jim Justice have responded to calls to remove the statue and bust, which critics contend are symbols of white supremacy.

During the 2021 regular session, the House of Delegates passed, on a 70-28 vote, a bill that would have made it a crime to remove or relocate Confederate statuary without state authorization. The bill died in the Senate Judiciary Committee.

No members of the public attended Wednesday’s commission meeting, which was moved at the last minute from its scheduled location in the State Museum Media Room to a second-floor conference room in the Culture Center to allow some committee members to participate via teleconference.

Commissioners did take up one agenda item, authorizing the state Treasurer’s Office to install laminate flooring in a suite of offices that have flooded on three recent occasions, including on March 26, when a pipe on an upper floor in the East Wing burst.

Steve Bohman, chief of staff to state Treasurer Riley Moore, told commissioners that the flooding further damaged carpeting in the suite, which houses the Treasurer’s Office communications division, as well as offices for two staff attorneys. He said the carpeting was torn out, revealing asbestos tile underneath.

Bohman said plans are to replace the carpet with laminate flooring that looks like white oak hardwood, to match the wooden doorframes in the offices.

In a letter to commissioners, Deputy State Historic Preservation Officer Susan Pierce said that, while Capitol architect Cass Gilbert provided direction for types of flooring to be used in the Supreme Court, the foyers of the House and Senate chambers, and the Governor’s Office, there is no record indicating that he specified types of flooring to be used in secondary offices in the Capitol.

She said the proposed flooring would not adversely affect the historical character of the building.