President Trump makes his first public comments on Friday in the Rose Garden after a week of near-hibernation.

President Donald Trump on Sunday doubled down on his refusal to concede the election to President-elect Joe Biden, even after suffering resounding court defeats over his election challenges and amid a growing popular-vote margin for the Democrat.

“He only won in the eyes of the FAKE NEWS MEDIA,” Trump said of Biden in a morning tweet, providing no evidence to back up his claim. “I concede NOTHING! We have a long way to go. This was a RIGGED ELECTION!”

The president’s declaration comes as he and his administration continue to falsely accuse Democrats of election fraud and impede the transition. It also follows an earlier Sunday morning tweet in which he appeared — if inadvertently — to acknowledge Biden’s win.

“He won because the Election was Rigged,” Trump said in the tweet. “NO VOTE WATCHERS OR OBSERVERS allowed, vote tabulated by a Radical Left privately owned company, Dominion, with a bad reputation & bum equipment that couldn’t even qualify for Texas (which I won by a lot!), the Fake & Silent Media, & more!”

As with his other accusations, Trump did not provide any evidence, and Twitter quickly flagged the tweet, noting that his “claim of election fraud is disputed.” Asked whether Trump’s original tweet was a sign that he is acknowledging defeat, Rudy Giuliani, the president’s personal attorney, said, “No, no, no. Far from it.” The president was being “sarcastic,” Giuliani said on Fox News Channel’s “Sunday Morning Futures.”

In remarks in Wilmington, Delaware, last week, Biden weighed in on Trump’s refusal to concede the race, denouncing the president’s actions and suggesting that Americans are “ready to unite.”

“Well, I just think it’s an embarrassment, quite frankly,” Biden said of Trump’s insistence that he won the race. Biden added that Trump’s actions “will not help the president’s legacy.”

On Sunday, Biden’s incoming chief of staff, Ron Klain, said the president-elect did not win because of fraud — “he won because he got more votes.”

“He won the same number of electoral votes that President Trump himself called a landslide four years ago,” Klain said. “But look, if the president’s prepared to begin to recognize that reality, that’s positive. Donald Trump’s Twitter feed doesn’t make Joe Biden president or not president. The American people did that.”

Sen. Bernie Sanders, I-Vt., who lost to Biden in the Democratic primary and has since become a forceful supporter of his candidacy, said Sunday that the president’s refusal to concede and his perpetuation of false claims of fraud are “absolutely disgraceful” and “un-American.”

“I would just hope to God that he has the decency in him to man up and say, ‘You know what, we fought hard. We lost the election. Good luck to Joe Biden. I love America,’” Sanders said. “But the fact that he is not even cooperating in the transition — the fact that he continues to deny reality and continues to suggest that Biden has illegally won the election — is beyond belief, in terms of the behavior for an American president.”

Trump and his allies filed lawsuits in five key states. But rather than revealing fraud, the effort by Trump’s legal team has so far done the opposite: It has affirmed the integrity of the election. Nearly every GOP challenge has been tossed out, and not a single vote has been overturned.

While most Republican lawmakers and officials have refused to acknowledge that Biden won the race, some on Sunday said their party needs to accept reality. In an appearance on NBC News’s “Meet the Press,” Arkansas Gov. Asa Hutchinson said that he expects Biden will be the next president of the United States and that Trump should allow the transition to proceed smoothly.

“It’s important that we accept the outcome of the election,” Hutchinson said. He noted that Trump probably does not want to concede while some of his legal challenges remain unresolved, but he added, “We need to come together as a nation.”

John Bolton, Trump’s former national security adviser, called on Republican leaders to explain to their voters that the president’s claims about the election are unsubstantiated. “The fact is we’ve seen litigation in all the key battleground states, and it has failed consistently,” Bolton said in an interview on ABC News’s “This Week.” He added: “If the Republican voters are only hearing Donald Trump’s misrepresentations, it’s not surprising they believe it. It’s critical for other Republican leaders to stand up and explain what actually happened. Donald Trump lost what, by any evidence we have so far, was a free and fair election.”

Bolton noted that the Trump campaign’s “basic argument is this was a conspiracy so vast and so successful that there’s no evidence of it.”

“If that’s true, I really want to know who these people are that pulled this off,” he said. “We need to hire them at the CIA.” 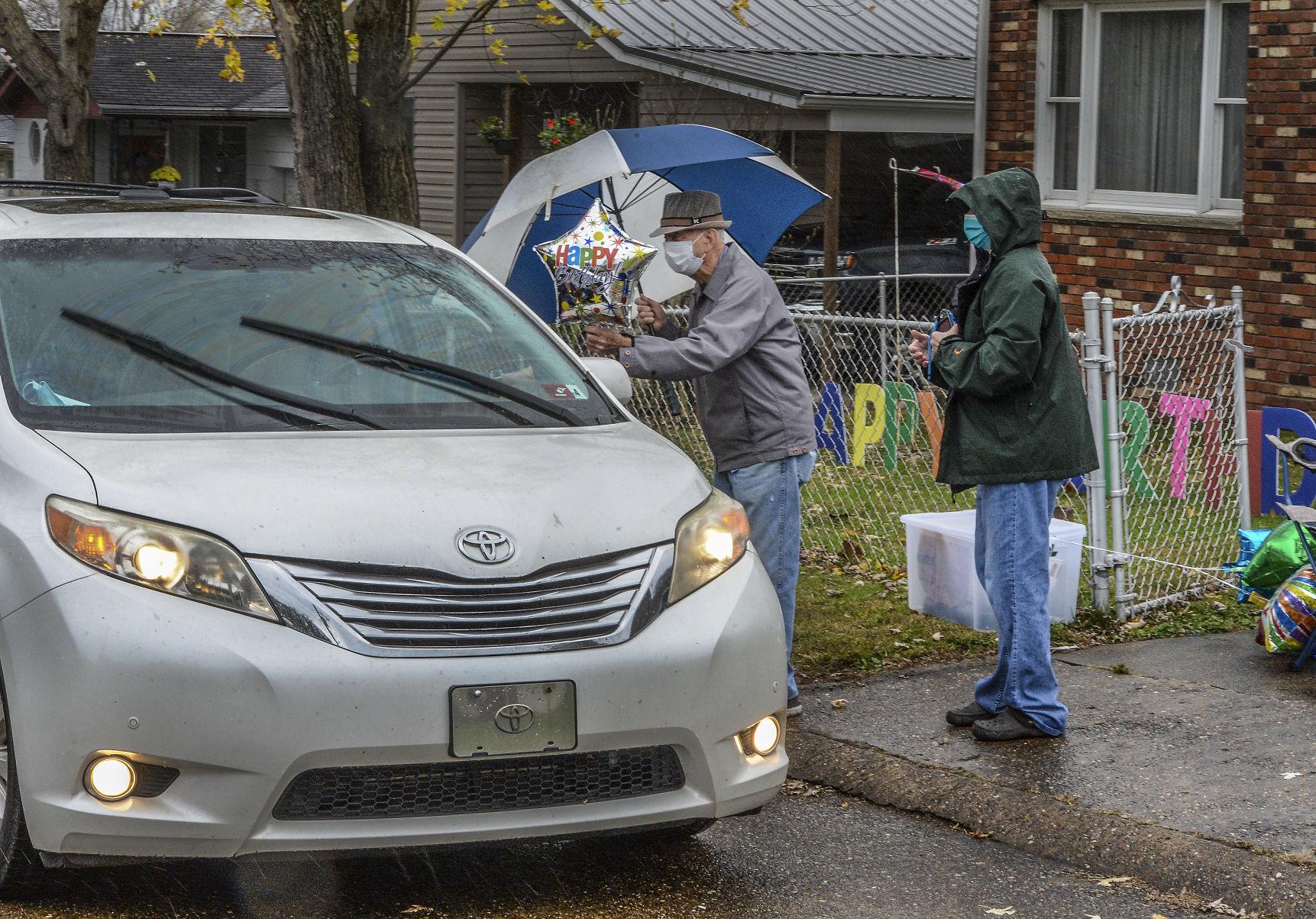 World War II veteran Kermit Thompson gets a balloon from a member of the First Baptist Church of Nitro while his daughter Chris Hylton watches. About 25 cars drove by Thompson’s house Sunday after church to wish him a happy birthday. Thompson turns 99 on Monday.

An emergency notification sign is posted at a railroad crossing as traffic travels along 4th Avenue, in Huntington, last week.

Complaints about blocked railroad crossings in West Virginia have been difficult to investigate in real time, but a new online portal could make a difference for state inspectors.

Susan Small, communications director for the West Virginia Public Service Commission (PSC), says PSC railroad safety inspectors are saying that the complaints have been increasing, but up until now the agency has not had a way to collect and investigate complaints in real time.

“Our RR Inspectors learn about a blocked crossing sometimes a week or two after the fact,” she said. “At that point it is impossible to collect the necessary information such as location of crossing, length of time the crossing was blocked, RR company, etc. This online portal will allow our inspectors to initiate an investigation while the crossing is blocked.”

The new online portal is a new feature on the PSC’s website. Small says most of the complaints come from residents. She said the online portal is where individuals can report trains that are illegally blocking one of the 8,000 public highway rail crossings in the state.

West Virginia Code (§31-2A-2) states that except in the case of a continuously moving train or an emergency, it is illegal for a railroad company to block a public street, road or highway for longer than 10 minutes.

“Blocked highway-rail grade crossings are becoming a major problem in West Virginia,” Public Service Commission Chairman Charlotte Lane said. “By reporting these issues, PSC Railroad Safety Inspectors will know where the problems are and will investigate the cause of the blockages. These findings will then be reported to the Federal Railroad Administration for review.”

“Our inspectors conduct an investigation then must get a police officer who can issue a ticket to the railroad, it is up to a magistrate to assess fines,” Small added.

Small said each public railroad crossing should have a bright blue emergency notification sign somewhere near the crossing. That sign will include the name and phone number of the railroad company and a unique identification AAR-DOT number, a six digit number followed by a letter, such as “123456 A.”

Once you have that information, you can enter it in the online portal at http://www.psc.state.wv.us/scripts/RRBlockedCrossings/blockedCrossingComplaint.cfm.

An innovation to libraries is coming to Clendenin — in about a year.

That’s how long Erika Connelly, the director of Kanawha County Public Library, believes it will take for the library to install a new EnvisionWare 24-Hour Library in Clendenin.

Nine feet of floodwater swept through the Clendenin branch library during the June 2016 flood, destroying the contents and leaving the building a total loss.

In 2018, the branch reopened in the former Clendenin Middle School.

The EnvisionWare 24-Hour Library is a kind of vending machine, a big metal, rectangular box about the size of an SUV. It’s as sturdy as an ATM and loaded with library materials, but doesn’t require staff onsite to manage it.

Connelly called it a “library enhancement” for the Clendenin branch, not a replacement.

“There’s a real need for us to have bigger space for programming and for a training lab at the physical location,” she said. “This will offset some of our routine circulation and give us a little more room to work with.”

Using a library card, patrons will be able to check out books, CDs, DVDs at their convenience, day or night. They’ll also be able to access Wi-Fi, pay fines and return materials, like at any other branch.

The unit won’t have the same number of physical selections as a brick and mortar library, however.

According to EnvisionWare’s website, the model KCPL plans to install can hold 340 items for checkout and has a 1,000 item return capacity.

There will be less to choose from, but the director said it would be tailored to the community’s tastes.

“We’re going to treat it like any other library location,” Connelly said. “Whatever people take, we’ll put back, so if we get a lot of checkout for science fiction or romance or non-fiction, that’s what we’ll put into it.”

The director explained that KCPL used tools to help develop collections for the different branch locations.

Patrons will also be able to request items to be sent to the 24-Hour Library for pickup.

Connelly said the plan to get the 24-Hour Library has been in the works since June.

The Federal Emergency Management Agency approved the plan but moving forward is pending final review. If that goes as expected, she said KCPL should be able to move forward with demolishing the old, damaged structure in Clendenin in January or February in preparation of the unit.

“That will take the bulk of the time,” Connelly said. “About seven months.”

The unit will be anchored into the ground with concrete and surrounded by a protective shelter.

The director said she wasn’t worried about criminals tampering with the library or trying to steal it.

“You’d need construction equipment to dig it out of the concrete,” she laughed and then added, “And there are cameras. We can monitor the site from here.”

Connelly said the EnvisionWare 24-Hour Library would cost just under $200,000 but wouldn’t require any special additional costs. Current KCPL staff would be able to maintain and stock it.

This will be the second 24-Hour Library in West Virginia.

Connelly was responsible for the first being installed in Marion County, where she served as library director of Marion County Library before taking the top job at KCPL.

“We got a really good response out of that,” she said. “We had 500 to 600 checkouts per week with it. It’s really convenient — and when COVID hit, it was the only location that stayed open.”

If this installation is successful, Connelly said that KCPL would probably pursue adding other units to its system.

“I know there’s a lot of anxiety from patrons and staff that we’re no longer going to have a library, but this is more about creating convenient access to library services,” the director said.

Connelly thought it could also be used to reach into parts of the county not being served as well as they could be.

“I’d love to have more of a library presence on the West Side of Charleston,” she said. “The board is very interested in the idea, so I think if this is successful, more machines are in the future.”