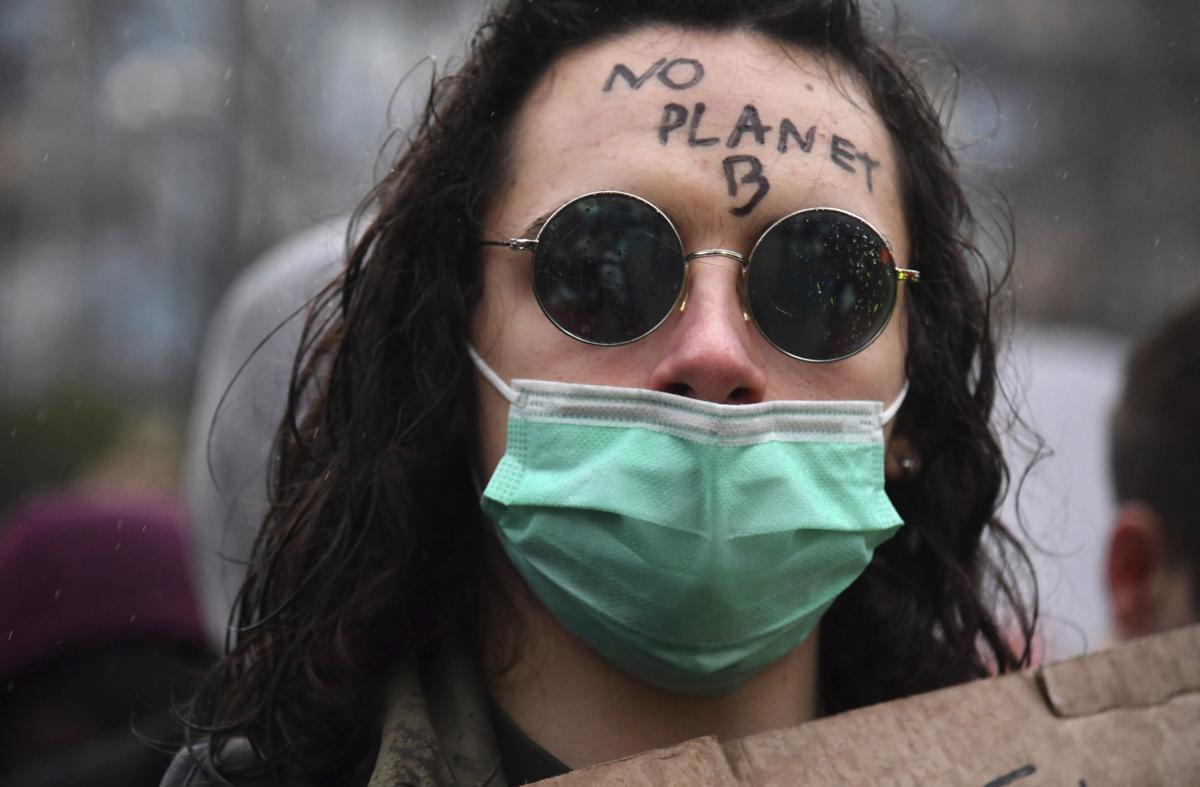 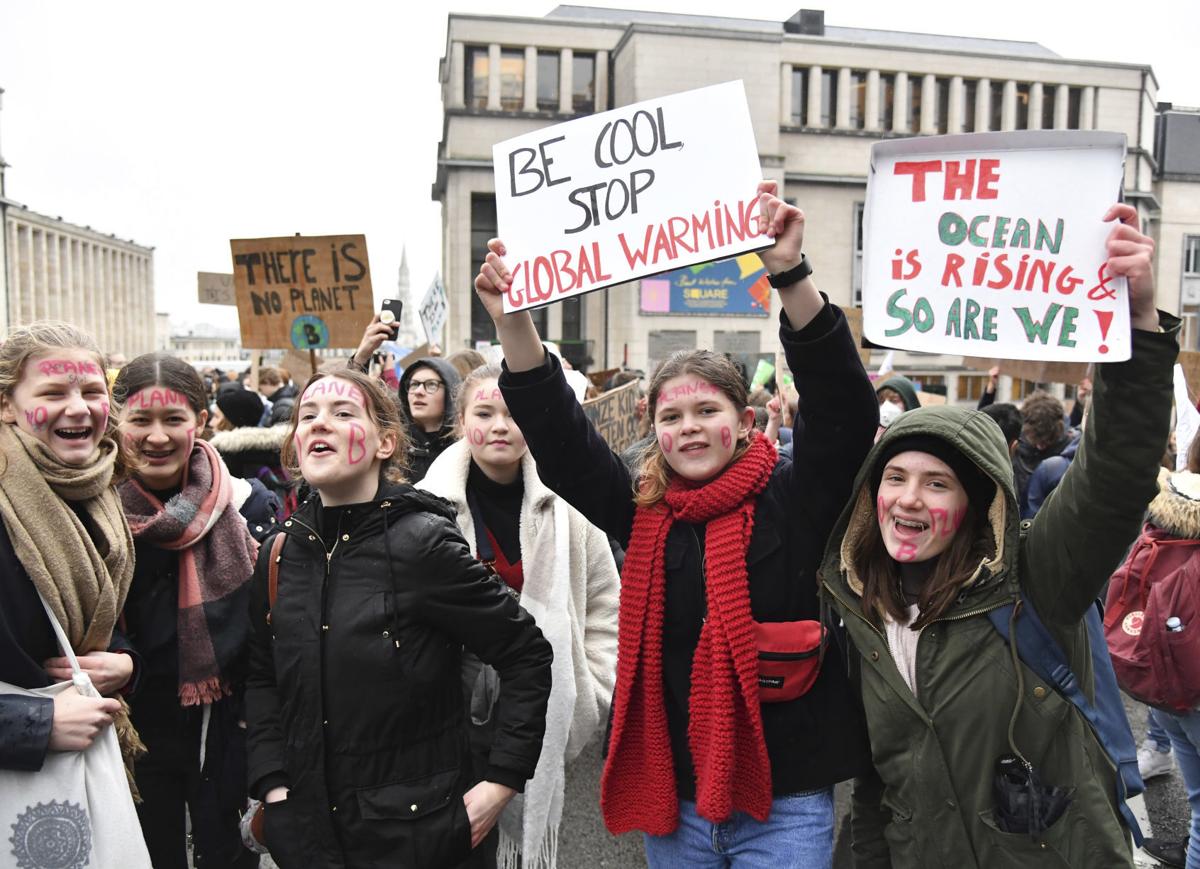 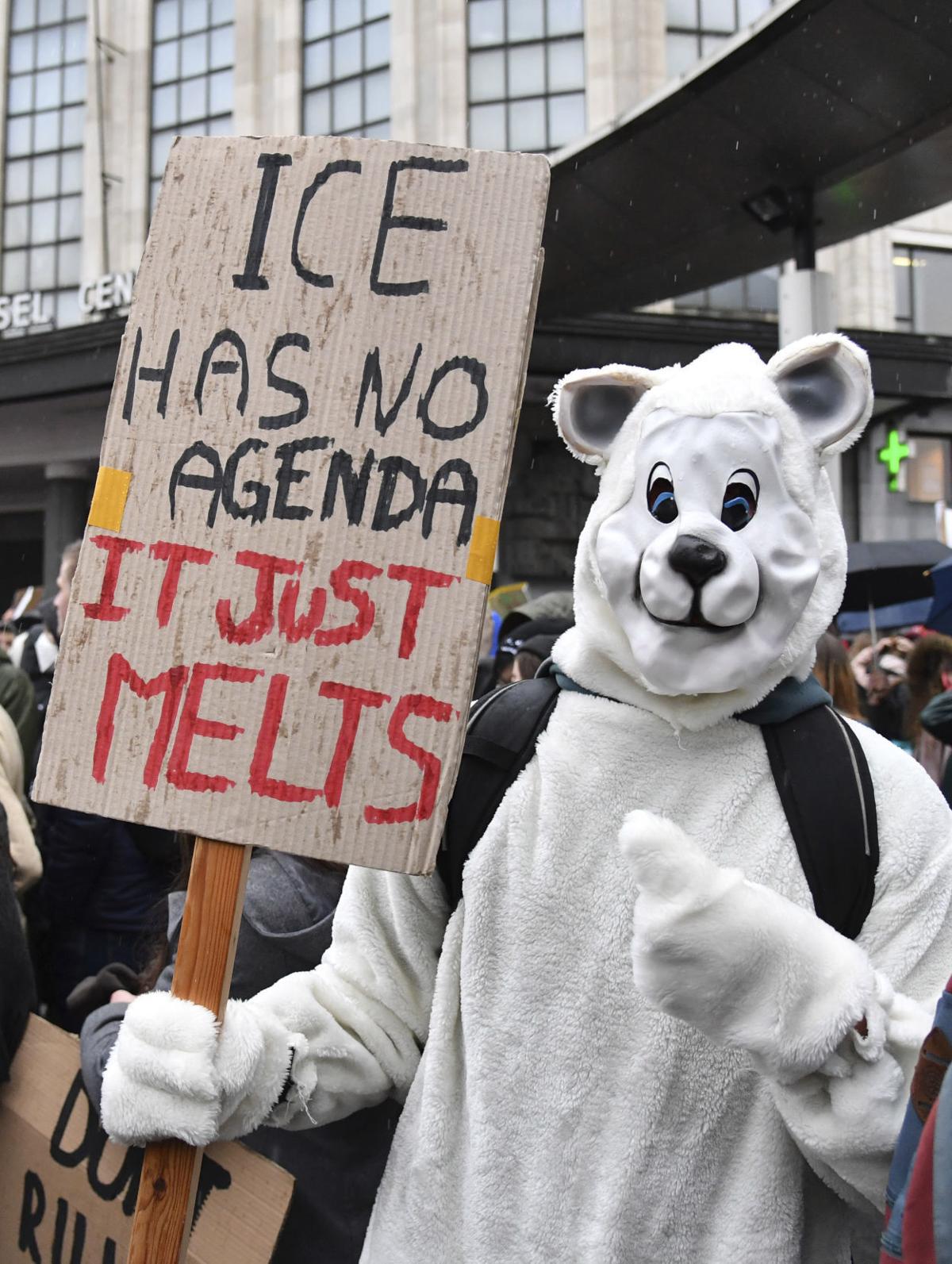 TOP LEFT: A girl wears a face mask and has a message written on her forehead that reads “no planet B” during a demonstration against climate change in Brussels, Jan. 17. BOTTOM LEFT: Students and others hold up placards with climate messages. ABOVE: A protester wearing a polar bear suit holds a placard. Thousands of students, as part of the Youth for Climate movement, took time off school to call for stronger action against climate change.

TOP LEFT: A girl wears a face mask and has a message written on her forehead that reads “no planet B” during a demonstration against climate change in Brussels, Jan. 17. BOTTOM LEFT: Students and others hold up placards with climate messages. ABOVE: A protester wearing a polar bear suit holds a placard. Thousands of students, as part of the Youth for Climate movement, took time off school to call for stronger action against climate change.

Climate change is a change in the statistical distribution of weather patterns that lasts for an extended period of time. It could refer to a change in average weather conditions, but today, it is a threat to our planet. And it is our fault.

According to an on-going study at NASA’s Goddard Institute for Space Studies (GISS), the average temperature of Earth, has increased nearly 1.4 degrees Fahrenheit since 1880. I know 1.4 degrees does not seem like a problem, but we are not talking about one geographical area — we are talking about the entire planet.

A change in the global temperature, even less than 2 degrees, is a worrisome amount. In the past, a one- or two-degree drop has succumbed the Earth to minor ice ages. Today, though, the global temperature has increased. It is important to be aware of the rising temperatures because it takes a large amount of heat to warm the Earth — the oceans, lands, and atmosphere — by 1.4 degrees.

The pace of warming has increased dramatically in the last 35 years, mainly from our use of fossil fuels. Our daily reliance on fossil fuels such as coal, which is the prime resource to produce the United States’ electricity, and oil, the main source for the world’s transportation, releases dangerous pollutants into the air. Greenhouse gases accumulate slowly, but they are persistent — meaning they take a very long time to leave the atmosphere.

As greenhouse gases dominate the atmosphere, they allow radiation from the sun to reach Earth but prevents Earth from radiating energy back to space. Much like a car in the summer: the heat gets into the car, but it cannot get out. This has led to warming oceans, rising sea levels, shrinking ice sheets, retreating glaciers and a decrease in snow dependency.

During this time of crisis, our oceans have saved us from a worse fate. The oceans have warmed by 0.4 degrees since 1969, absorbing 93 percent of the excess heat, as reported by the Intergovernmental Panel on Climate Change. Without the oceanic buffer, global temperatures could have risen much more than they already have.

Warming oceans threaten food security, causes extreme weather events, diseases and a loss of coastal protection. It also causes coral bleaching, and damages breeding ground for marine life. The amount of carbon dioxide absorbed by the topmost layers of the oceans has increased by two billion tons annually. This leads to deoxygenation, a decrease in the amount of oxygen dissolved by the oceans, reducing the amount of oxygen for marine life to thrive.

The rising temperatures of the world’s oceans has contributed to the rising sea levels. The warm temperatures had caused ice sheets and glaciers to melt. Increased sea levels can cause devastating flooding, widespread erosion, contamination of aquifers and crops, harm to marine life, and it could force people to move inland.

The melting ice adds more water to the already swelling oceans. Two of the endangered ice sheets are in Greenland and the Arctic. These sheets are miles upon miles of floating ice. If they were to melt completely, they would raise sea levels dramatically; Greenland by 20 feet and the Arctic just shy of 200 feet.

Losing the ice shelves are detrimental to wildlife. Animals such as polar bears, seals, seabirds, and walruses depend on the ice, in various ways, to survive.

The warming planet has decreased the dependability of snow coverage. Satellites have shown that the amount of spring snow has lessened, and that snow is melting an average of two weeks earlier than it should, affecting us in a way we might not have been prepared for. Global warming threatens snow reliability, threatens a hobby most of us enjoy: skiing. Ski resorts are unable to produce enough snow, real or artificial, necessary to remain open due to the warmer weather. It is estimated that, by 2050, climate change will have cut the length of ski seasons by 50 percent.

Not only does climate change affect the things we do, it can also affect the way we feel. It will impact our clean air, safe drinking water, sufficient food sources, and our means of shelter. The World Health Organization (WHO) estimates that climate change will cause an additional 250,000 deaths per year between 2030 and 2050. These deaths are expected to occur due to malnutrition, malaria, and heat stress.

Higher temperatures raise ozone levels and other air pollutants which exacerbate cardiovascular and respiratory diseases. Also, other aeroallergen (airborne substances that can trigger allergic reactions) levels will increase in the warmer temperatures, as well as water-borne diseases and diseases carried by insects, snails, and other cold-blooded animals. Climate change will alter the geographical ranges and transmission seasons of vector-borne diseases, which are human illnesses caused by parasites, viruses, and bacteria.

There are several ways that we can fight the rising global temperature. We can power our homes with renewable energy, invest in energy-efficient appliances, reduce our water waste, use better light bulbs, unplug unnecessary devices, drive fuel-efficient vehicles and walk instead of drive whenever possible. It will take all of us to face this problem head-on and find a solution, before we destroy the only home we have.

We all probably know by now (at least, I hope that we do) that we are going through climate change — that the world is warming, and that this …