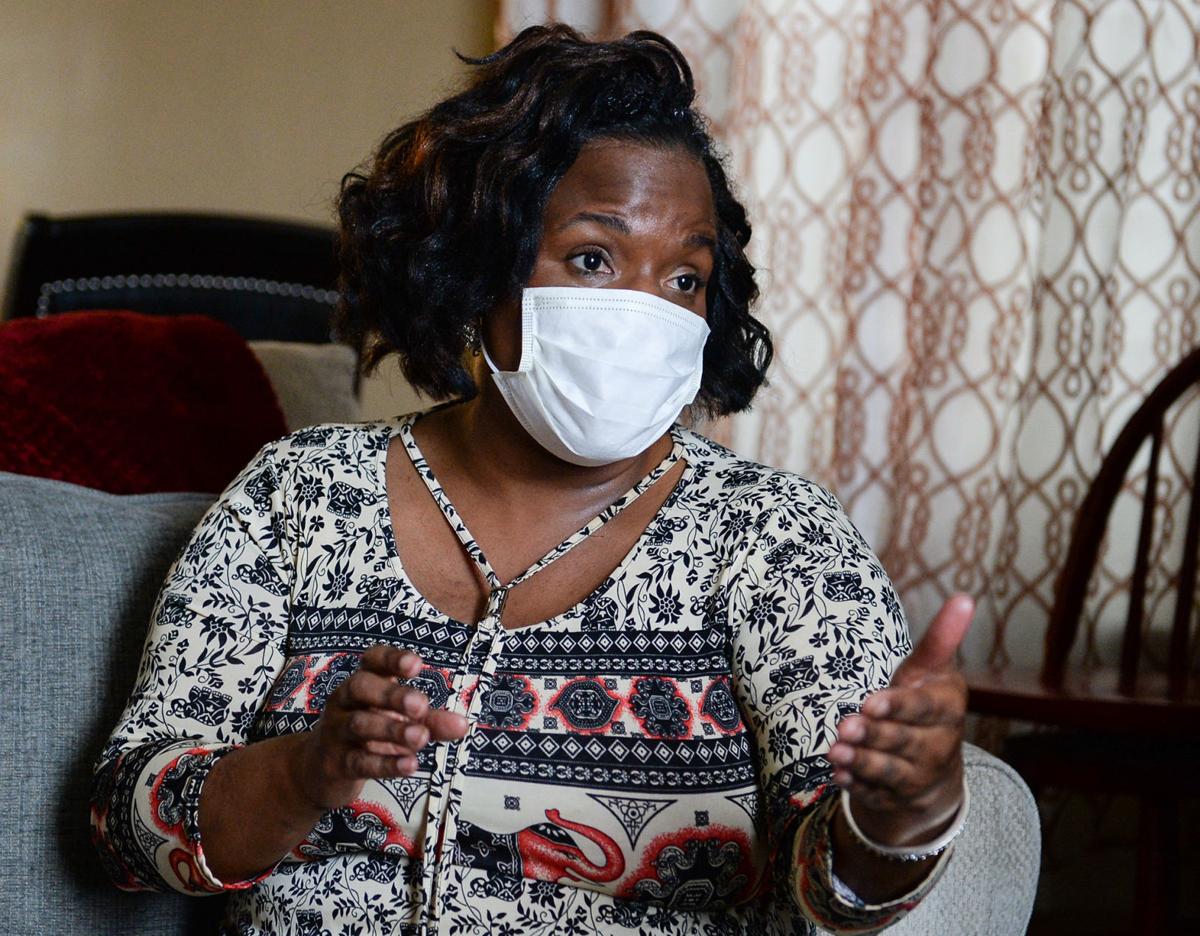 Romelia Hodges speaks inside her home in Fairmont, on April 28, about the efforts to trace and test members of West Virginia’s Black Baptist church community after a COVID-19 outbreak in mid-March. 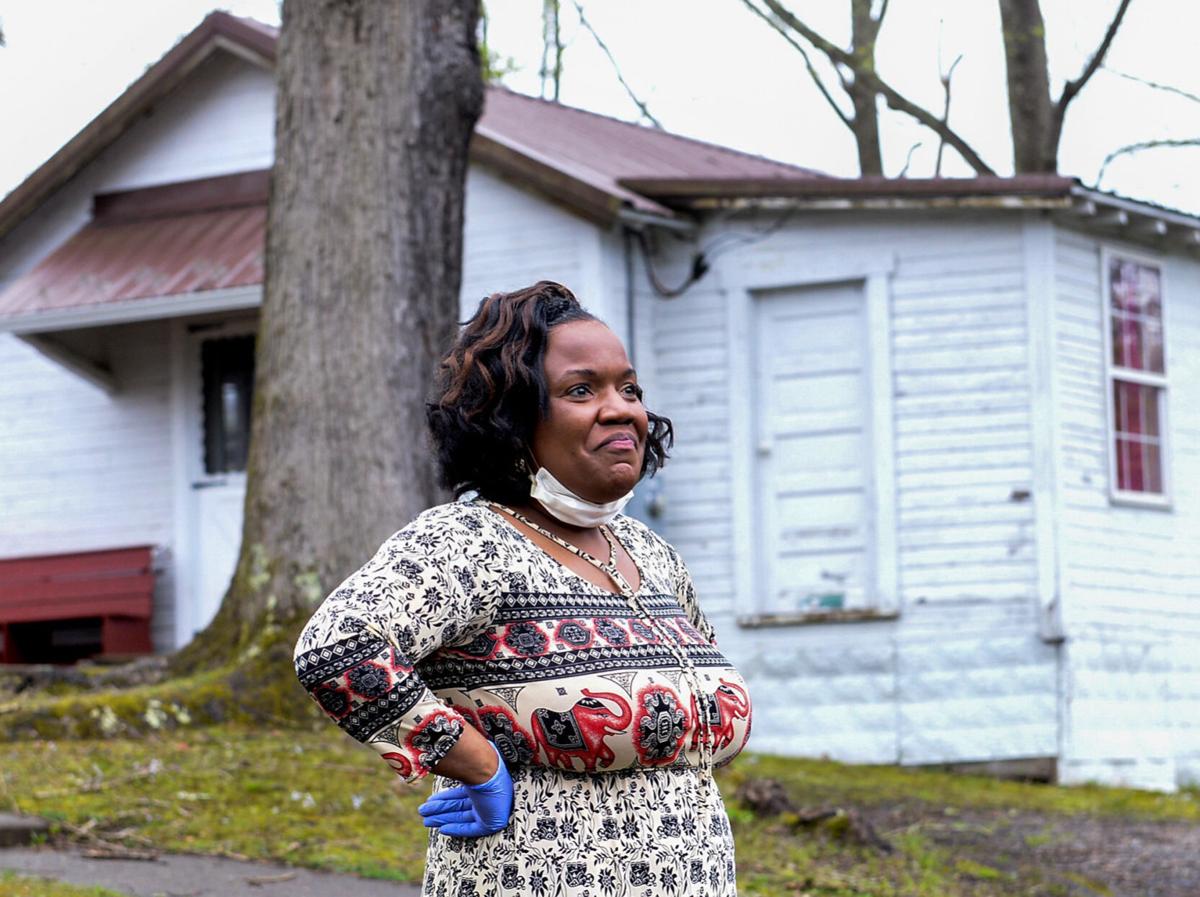 Romelia Hodges led a small team of Black women to get proper assistance for community members affected by COVID-19, who were left out to dry by government and health agencies. 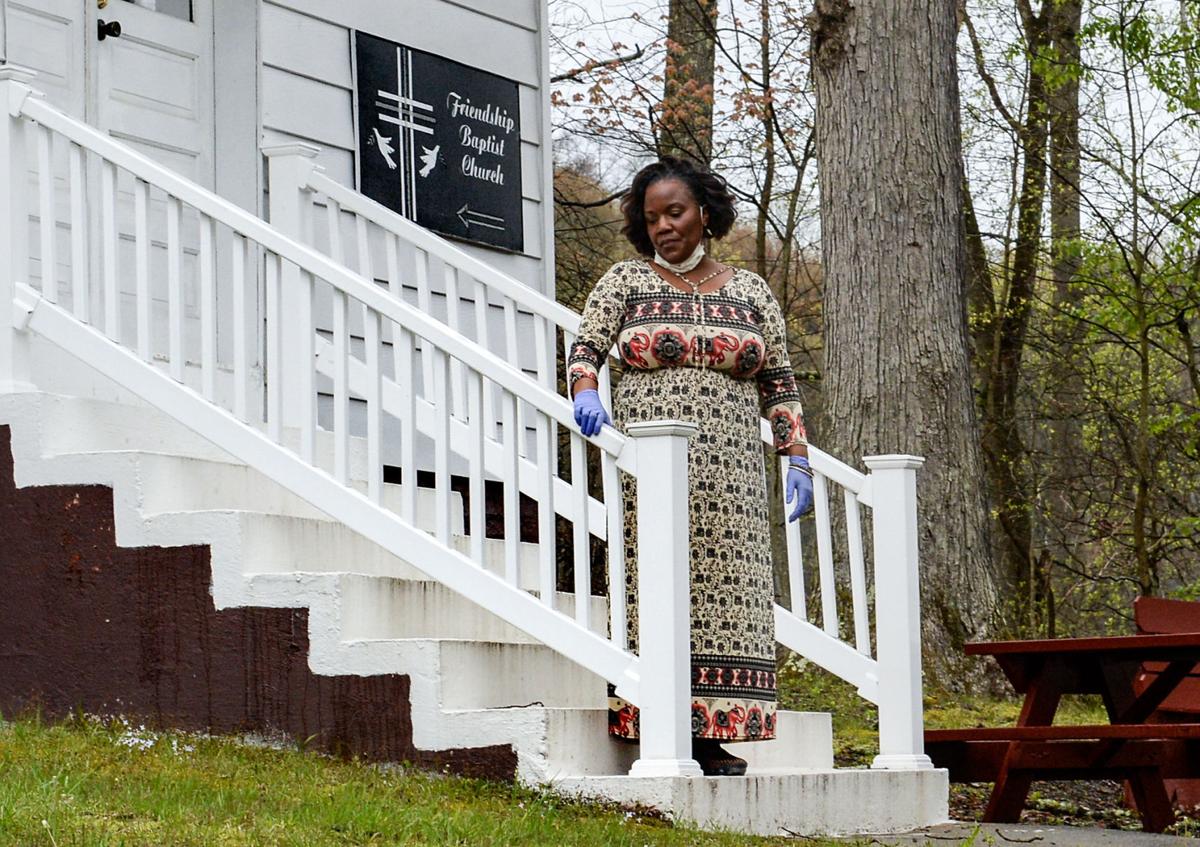 Romelia Hodges outside the Friendship Baptist Church in Everettville, Monongalia County, which is the site of the outbreak. 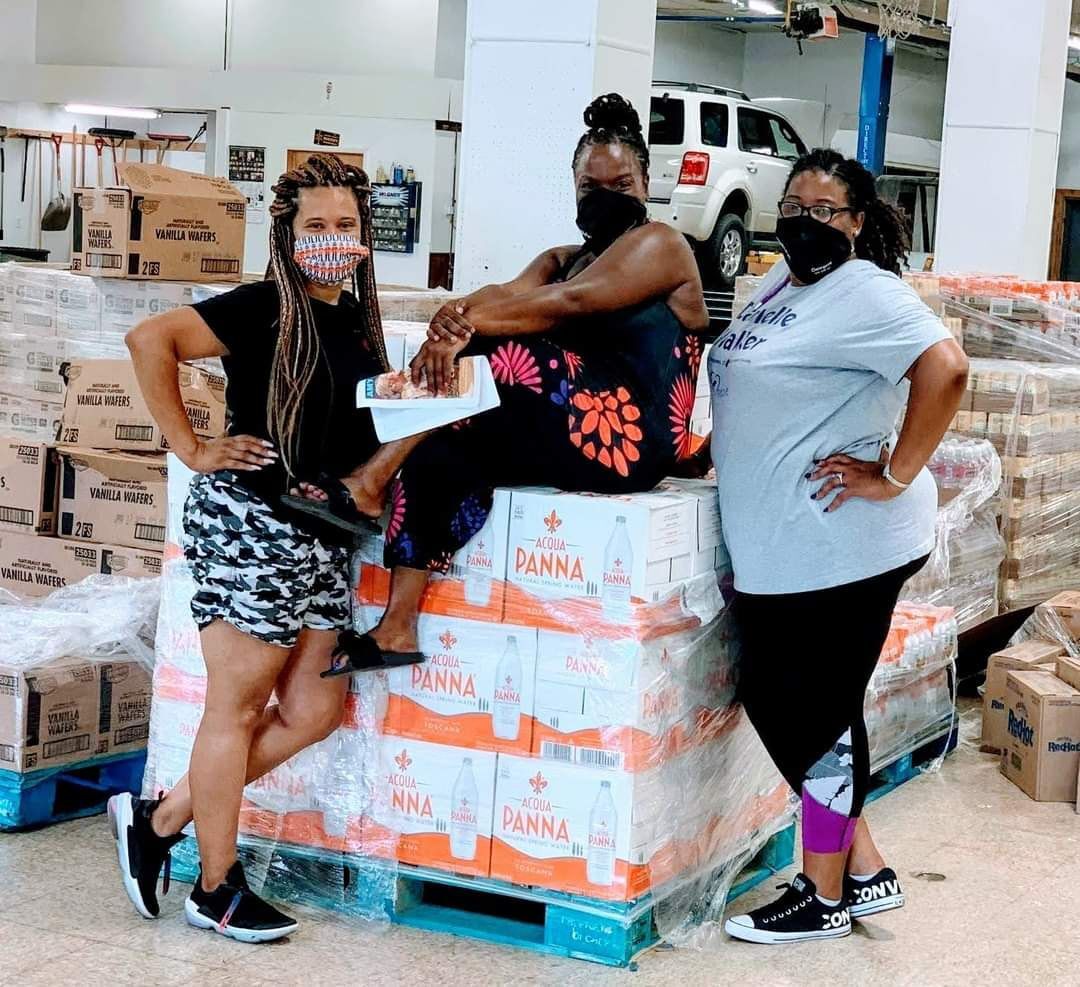 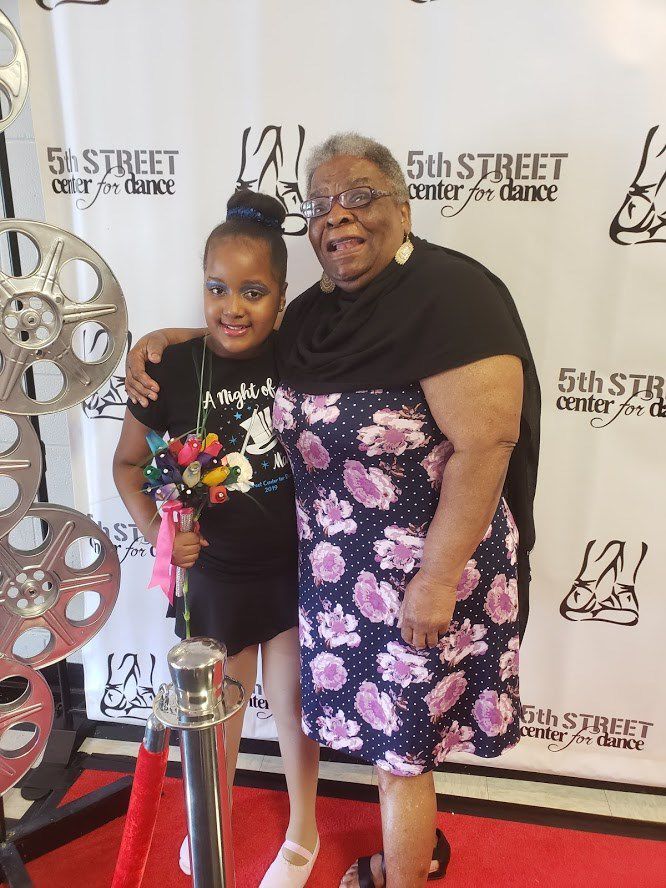 Romelia Hodges saw too many people sitting on their hands.

COVID-19 tore through North Central West Virginia’s Black Baptist church community in late March. People were dying and dozens were infected. Churchgoers were turned away from hospitals and denied tests. People were left fending for themselves.

“The feeling was one of sheer panic, confusion and pandemonium,” Hodges said. “Like being underwater and trying to swim up for air and never quite reaching the top.”

The institutions designed to protect the most vulnerable communities during crisis did not answer the call.

“The truth is health officials and government officials ignored our pleas for help,” Hodges said. “We were invisible.”

Hodges stepped up, calling attention to her community’s plight. For her response to the church outbreak and continued activism for the health of minority communities in West Virginia, Hodges is the Charleston Gazette-Mail’s West Virginian of the Year.

The COVID-19 nightmare began unfolding on the morning of March 15, when dozens of people gathered at Friendship Baptist to mark the Rev. Laverna Horton’s sixth anniversary at the church in Everettville, near the Monongalia-Marion County line. Later that day, the federal Centers for Disease Control advised against gatherings of 50 or more. The following day, Gov. Jim Justice declared a state of emergency in West Virginia.

As the virus and fear spread, Hodges went to work, quickly organizing a small team to set up contact tracing and taking calls from frightened people, directing them to care and resources.

All the while, Hodges was fighting the virus inside her home. She’d attended the church event with her daughter Dazzelyn, 10. Her entire family was infected. The virus nearly killed her husband.

Nonetheless, Hodges chose to continue caring for her community.

“I don’t know many people that would have made that decision,” said Tiffany Samuels, who along with Hodges helped organize the response to the church outbreak.

State and federal help came nearly three weeks after the event. By then, the virus had exacted a deadly toll.

“People who I have admired my entire life and who were influential in my upbringing were dying around me,” Hodges said. “My community depended on me. They put their trust in me to be the voice of reason and the path of hope. I carried a tremendous burden. There was never a task in my life more important.”

A Fairmont native, Hodges, 45, is an alumna of Fairmont Senior High School and Fairmont State University. She holds a master’s degree in educational technology from Concordia University Irvine. She works as a professional speaker. In the education field, she helps community schools with recruiting, development, logistics, facilitating, training, execution and organizing.

Some of her most important work came two years before the church outbreak, when Hodges built a community Facebook page for Black residents.

“I had to harness all the skills I acquired over the years and utilize them in a field for a virus I knew very little about ... I began to glean every article I could find, and not just news articles, but scholarly articles,” Hodges said. “Then I began to share this information with my community in a way that they could understand and digest. I learned how to conduct contact tracing and how to effectively communicate this information to the public.”

Hodges’ fight has not stopped.

On May 1, Justice announced the creation of a minority health task force. Hodges was named to the group, which worked to expand testing access for minority communities across West Virginia. Hodges said she helped plan eight testing events across the state.

The mural included a portrait of Harriet “Aunt Hat” Whitely, the last person sold as a slave on the Marion County Courthouse steps. Whitely, who died in 1941, was buried in an unmarked grave for 75 years until the Woman’s Club of Fairmont dedicated a headstone to her in 2016.

The decision to include Whitely irked Hodges, who said Marion County has countless examples of trailblazing Black natives that aren’t tied to slavery. She said young Black girls should not have to look to slavery to find representation in their community.

Hodges started a petition to have Whitely’s portrait removed and replaced with another prominent native Black woman. The mural is unchanged.

There was another fight closer to Hodges’ heart.

On Aug. 4, her mother, Amy Rose Parks, died of breast cancer. She was 80. Parks was a longtime civil rights leader who was part of a team sent to Iran for negotiations with Ayatollah Khomeini, the former Supreme Leader of Iran, to help free American hostages.

The City of Fairmont denied the Hodges family permission to use Windmill Park for a public funeral for her mother, though the county health department approved Hodges’ request and softball games were played there with no capacity limit.

Hodges skipped her mother’s funeral to protest. She thought it was the most appropriate way to honor her.

“The City of Fairmont Ruined My Mother’s Funeral,” read a handwritten sign Hodges placed on her lap while she sat on a folding chair for hours outside the Marion County Courthouse.

The fight in Hodges flows through her blood.

“My mother had a saying passed down by her mother, my grandmother. She would say, ‘Once a job has once begun, never leave it until it’s done. Be it little, great or small, do it well or not at all. Not at all is not an option.’ It’s a very simple pearl of wisdom and it is how I conduct my life,” Hodges said. “More than anything, be good to people and the universe will bless you.”

Following the Windmill Park flap, Hodges led a team of volunteers in the “Amy R. Parks Convoy of Hope,” gathering and hand-delivering 27 wooden pallets of food to underserved neighborhoods in Clarksburg, Fairmont and Morgantown.

In September, Hodges created a 10-part video series for parents anxious about schooling children from home and overcoming the community’s digital divide. During Halloween, Hodges hosted an event at Windmill Park to keep children in a centralized location while following COVID-19 safety guidelines.

The following month, she was named testing project director for the Partnership of African American Churches, a statewide nonprofit community development organization based in Charleston. She’s now lead organizer on testing events across the state in Black and minority communities.

Last week, the Hodges family and Regina Riley, a local pastor, lit up Windmill Park with Christmas lights and decorations for the first time in the park’s history. Hodges’ son Dre’, a mechanical and aerospace engineering major at West Virginia University, used school equipment to build designs for the lights.

Hodges’ husband, Patrick, 45, and children Dre’, 20, and Deacon, 17, all are immunocompromised with a rare form of anemia.

A teacher, Patrick has not returned to work because of complications from contracting the virus. Doctors found blood clots in his legs and lungs last month. Dre’ has experienced low oxygen levels and undergone multiple blood transfusions since September, his mother said. He spent most of Thanksgiving in the hospital. Deacon underwent surgery earlier this month. Patrick was sent to the hospital with blood clots the same day.

Hodges faced backlash initially for going public about the outbreak because of the virus’ stigma early, Samuels said.

“Romelia has spent endless nights without sleep because she was worried about her community, and that’s not just our community here in Fairmont, but our citizens in West Virginia as a whole,” Samuels said. “She’s always looking for solutions, and she’ll always sacrifice herself for others and that’s what she’s done throughout the pandemic.”

Delegate Danielle Walker, D-Monongalia, the final member of the trio of Black women who organized the church outbreak response, said Hodges “is a hero without a cape.”

“She is a trendsetter that is a voice of the Black community. She is humble and driven and empowering,” Walker said. “Romelia has taken a stand by bringing issues of racial disparities to the forefront. She has been a soldier, a commander, a lieutenant of change. I am honored to call her a friend, but we have grown to be sisters.”

Hodges’ statewide work has a cost. She’s been forced to spend time on the road or on calls. She credits her husband with keeping her grounded and her children for volunteering and accepting occasional fast-food dinners or burnt meals as a result of her being distracted.

She is inspired by her mother.

“She taught me everything I know about community activism,” Hodges said. “If I measure up to half the woman she was, I have done a good thing because she was larger than life to many.”

Hodges recalled a voicemail her mother left after a testing event in the spring was featured on local television.

“OK, Mrs. Celebrity, give your mother a call,” Parks told her.

It was the first time Hodges was brought to tears during the pandemic.

“My mother was dying of breast cancer and I lost precious months with her that I can never get back because the risk of being around her was far too great,” Hodges said.

Hodges’ faith strengthened her during those difficult days.

“I often look back on that time and get a lump in my throat. Clearly, I was operating under the blessing of a higher being. That whole experience was surreal,” Hodges said. “But my late mother always told me I was headstrong and never took no for an answer. She would chuckle and tell me it was also one of my best qualities.

“There was no other option in my mind but to keep trying until my community was tested. Anything less was unacceptable.”

Live Life Fully: What other people think about you

LETTER: Coal mining has simply got to go