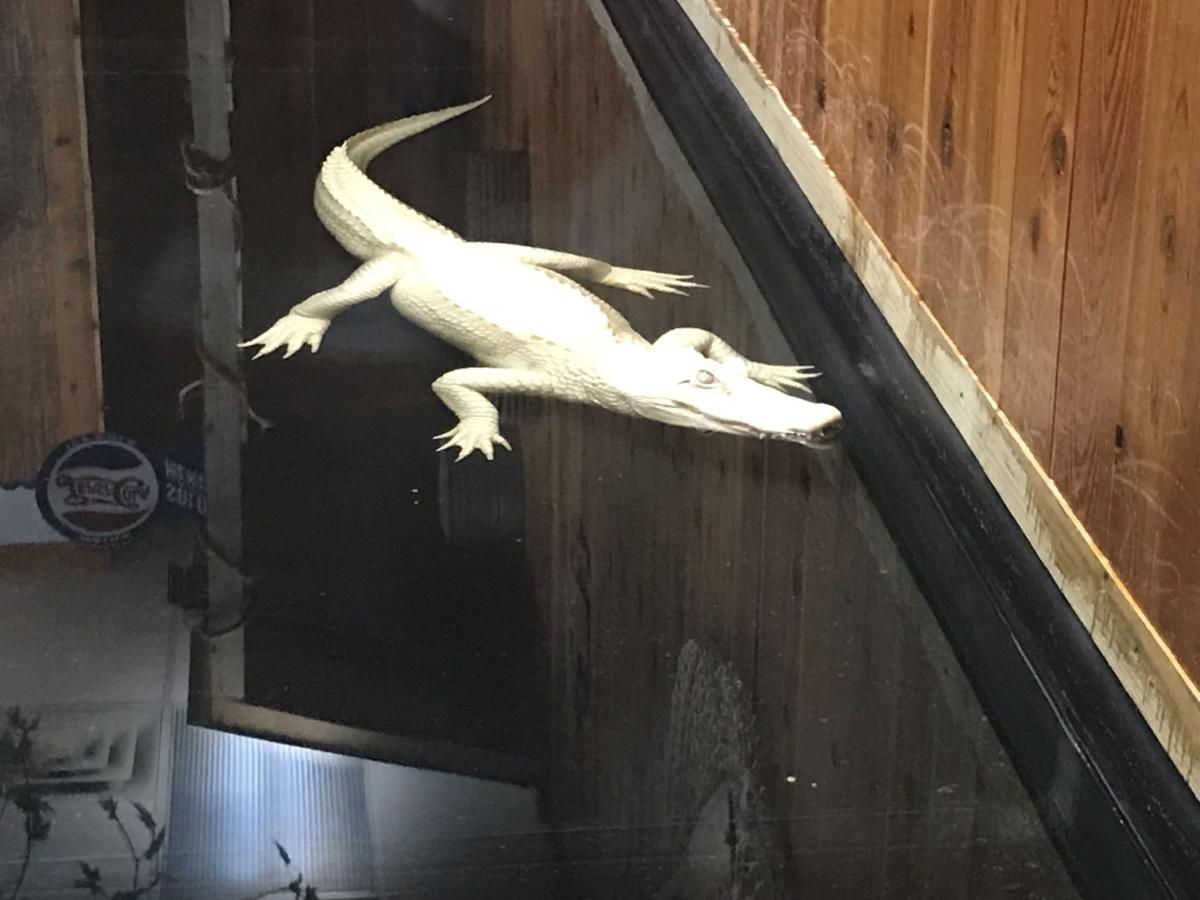 Reporter Bill Lynch’s trip to all 55 counties is showing him things in the state he never knew existed, like an alligator at Oglebay Park in Wheeling that will haunt his dreams forever. 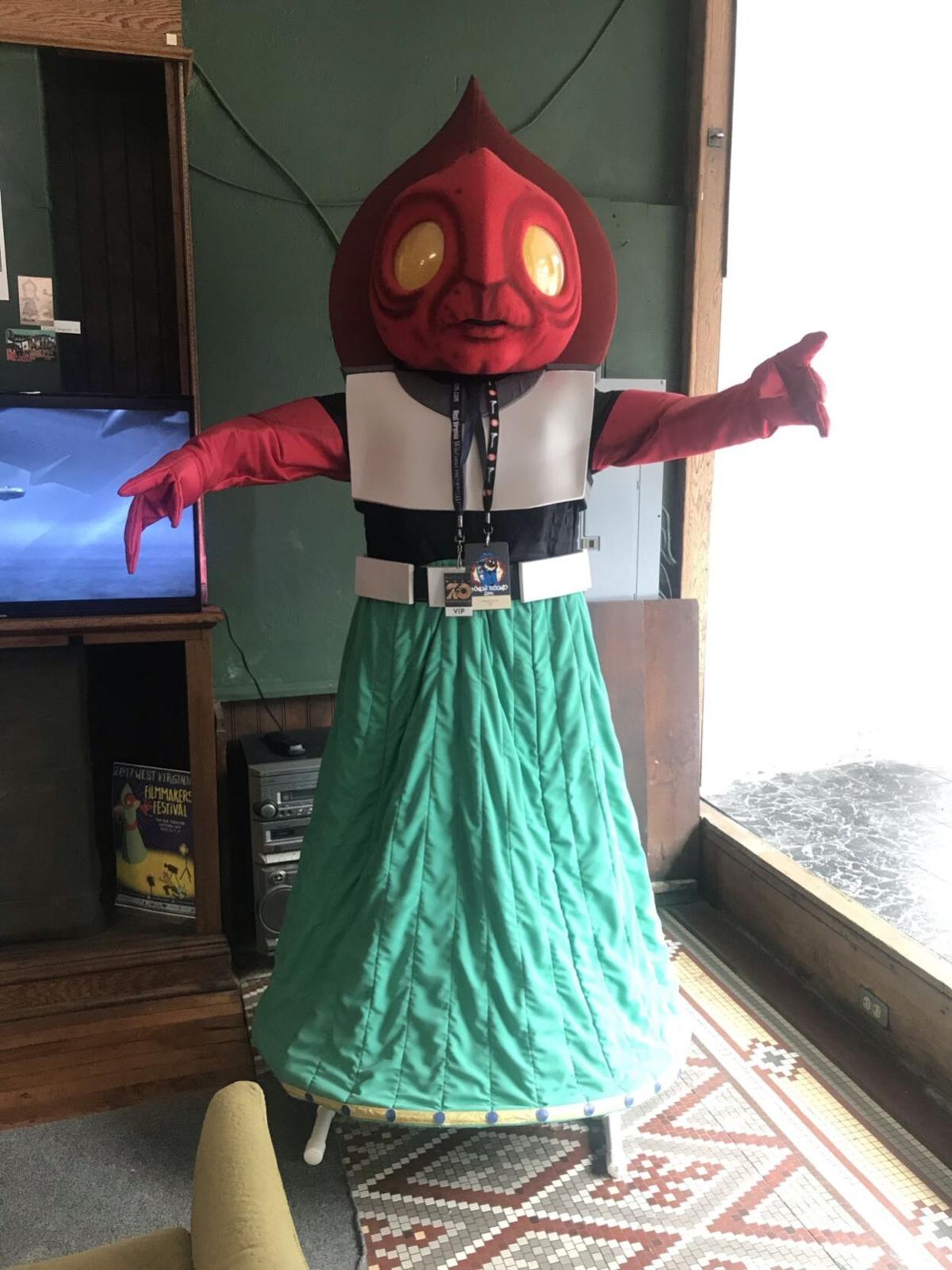 West Virginia is full of unusual places and odd characters. Some of them, like the Braxton County Monster, were just visiting (probably). 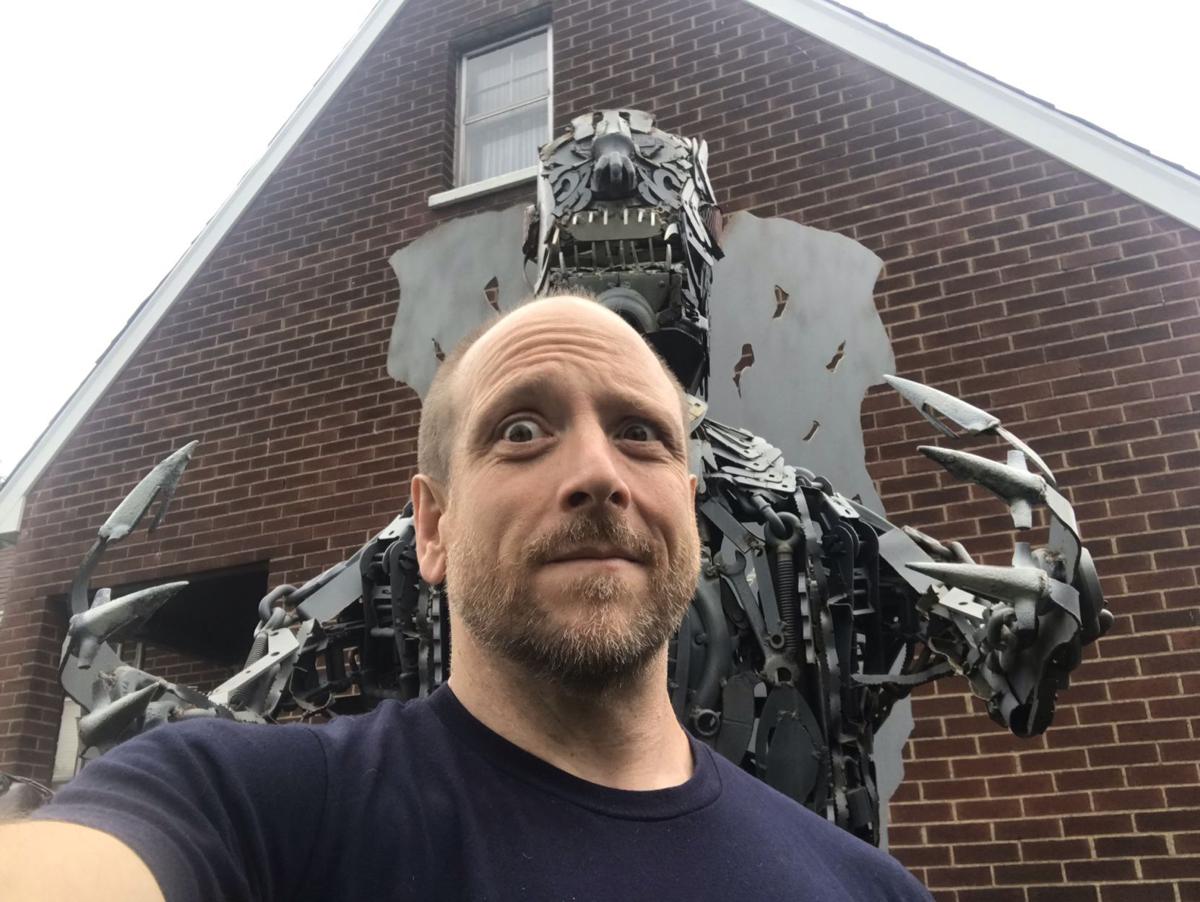 In Hancock County, Bill discovered the work of metal artist Ken Sinsel, who has somehow managed to make the Mothman even more menacing.

Reporter Bill Lynch’s trip to all 55 counties is showing him things in the state he never knew existed, like an alligator at Oglebay Park in Wheeling that will haunt his dreams forever.

West Virginia is full of unusual places and odd characters. Some of them, like the Braxton County Monster, were just visiting (probably).

In Hancock County, Bill discovered the work of metal artist Ken Sinsel, who has somehow managed to make the Mothman even more menacing.

I felt a dull thud in the bottom of my stomach after I pulled the ragged manila envelope out of my mailbox. My name and address were written in big, messy letters. I presumed the package was from my sister, Susan, in Virginia.

But the envelope was flat. It felt empty and there definitely should have been something inside of the envelope.

“Planning” to get out and see all 55 of West Virginia’s counties started in early Spring, but there were a lot of stops and starts. Well, I didn’t really know where to start, so I did what I usually do — I went to my local branch of the Kanawha County Public Library and started poking around for a book.

I wound up with an armload of West Virginia travel guides, including a couple of books by Gazette-Mail institution Rick Steelhammer.

Partly, I wanted ideas on where to go, but I also wanted ideas on how to approach traveling. I wasn’t sure what I was looking for, so I picked up some books, flipped through them and looked at what some other writers thought was interesting.

What’s interesting to one man will bore the next one into oblivion and because of the pandemic anything that looked remotely interesting, that looked like it might be worth a visit, had to be checked and double-checked online.

COVID-19 closed restaurants and attractions everywhere. Some of them were just gone, never to return.

The whole process was slow going.

Then, in early April, I drove to Virginia to meet my sisters, Susan and Laura, at Susan’s home in the rural, eastern part of Virginia — farm country.

It was the first time we’d all seen each other since my niece’s wedding in the fall of 2019.

In the year and a half since we’d been in the same room, that niece and her husband had welcomed a new baby girl, who was celebrating her first birthday. A little gathering had been planned and I’d thought I could probably skip out on at least part of it, so I’d brought along a travel guide for the state of West Virginia.

I thought while the womenfolk were busy hanging balloons and making punch, I could do a little research and make some progress on planning my summer trip.

I had no idea where I was going, except I was sure that I wanted to go see the giant teapot in Chester.

But instead of spending the afternoon hiding out at my sister’s place listening to the cows next door swear at each other and reading up on West Virginia’s greatest hits, Susan asked me to help out.

While she and half a dozen others assembled the party at the fire station, I ran errands for them, picked up things they’d missed or didn’t have enough of. Then, I toted folding chairs from one room to the next, set them up and then put them away after cake had been served, the baby had been celebrated and everyone left for the evening.

When we got back to Susan’s, my Aunt Joyce was there. A banner hung over the entryway into the living room. There was a cake, presents and a small surprise birthday party for me, which was both moving and hilarious.

Despite what Facebook believes, my birthday isn’t in April. It’s June 18.

It was a great visit, but predictably, I left the library book at my sister’s house.

Eventually, I asked her to send it.

She told me no problem. The book would be on its way in a day or so.

In the meantime, I collected some brochures, looked at websites and bugged people on Facebook, but the book hadn’t arrived.

Fines were starting to accrue.

I asked about the book again. Susan was sure she sent it. Another week passed and then the big envelope came in the mail. It was clearly empty — or just about.

Inside, I found a postcard-sized slip of paper with a bit of an explanation about the many difficulties of sorting and shipping that plague the U.S. Postal Service this very day.

“When a Post Office handles in excess of three-quarters of a million pieces of mail daily, it is imperative that mechanical methods be used to maintain production and ensure prompt delivery of the mail,” the slip read. “It is also an actuality that modern production methods do not permit personal attention to individual pieces of mail. Damage can occur if mail is insecurely enveloped or bulky contents are enclosed.

“When this occurs and our machinery is jammed, it often causes damage to other mail that was properly prepared.”

Somebody had apparently sent out a 10-pound octopus or a leaf bag full of Legos and gummed up the machine.

I was out twenty bucks.

The post office, meanwhile, said they were working to make things so much better, but nevertheless, took no responsibility. They did regret the inconvenience I experienced, which was nearly an apology.

I’m getting that slip laminated. It’s going to be my new favorite bookmark.

Almost as soon as I had a handle on that problem, another cropped up. A week before I was scheduled to drive to Hancock County, the check engine light on my car began to glow in a threatening way.

My Chevy Cruze has been a reliable vehicle for me, but it was coming up on 100,000 miles. The body had a few minor scratches and maybe I could do with a new set of tires, so I wondered how bad could it be?

I tried to argue that I didn’t need all of that — at least, not at once.

The mechanic and I went back and forth over the phone about it for a while.

“Maybe I could just get the brakes now and do the tires next month,” I told him.

The brakes seemed like the most important thing. I would want to stop, I joked.

The mechanic agreed. The brakes were very important, but he assured me, given the state of the car’s tires, stopping wouldn’t be an issue. I would be stopping very soon.

“They’re worn through,” he said. “You’d be better off getting the tires first and then the brakes, but honestly, you need both.”

Right. I spent the money.

Slowly, I arrived at a loose itinerary of counties for the first month of trips. I arranged a few places to stay. This made it easier to visit specific parts of the state and do more than just get a sandwich, wave at the “Welcome to ...” county sign and then turn around to drive home.

I joined AAA, which seemed like the right thing to do.

As I prepared, I read brochures, checked websites and pestered friends. I only felt like I halfway knew what I was doing, which, if I’m honest, is better than usual.

All I could do was hope for the best and pray for good weather.