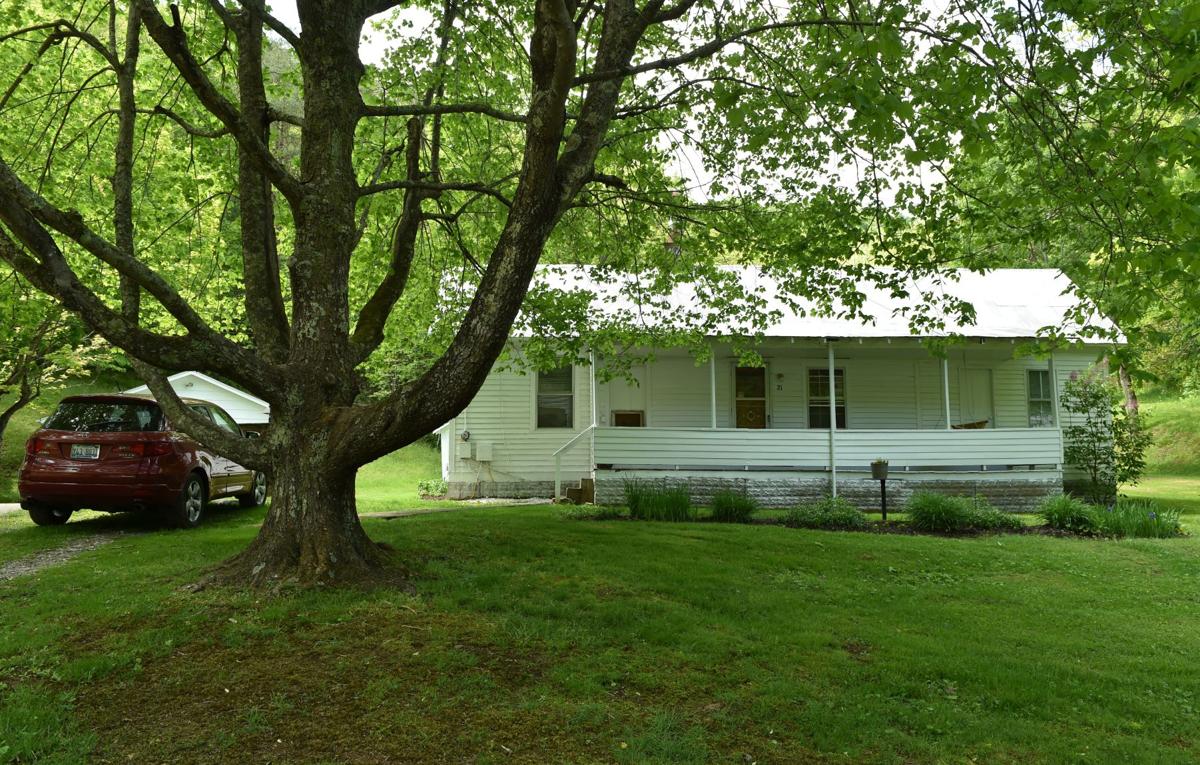 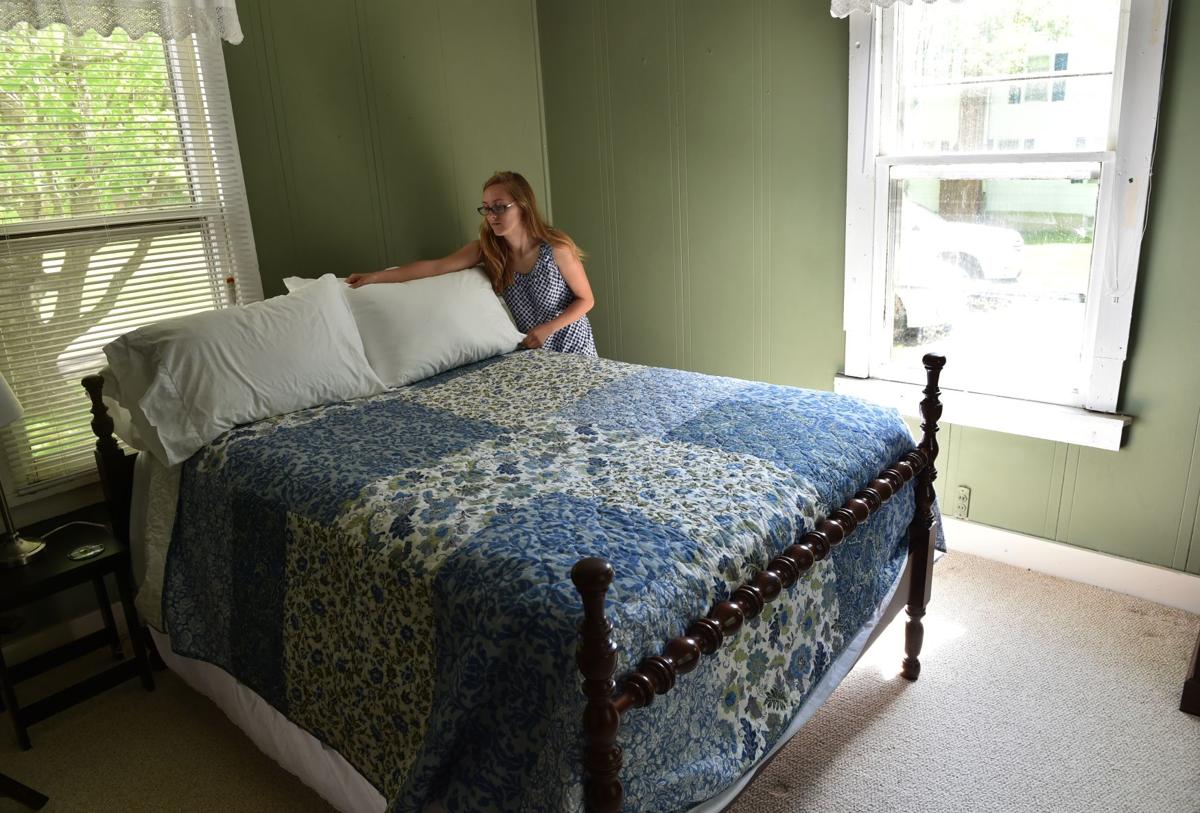 Brooke Born straightens the pillows on a bed in the main house of Country Road House and Berries bed-and-breakfast in Clendenin. 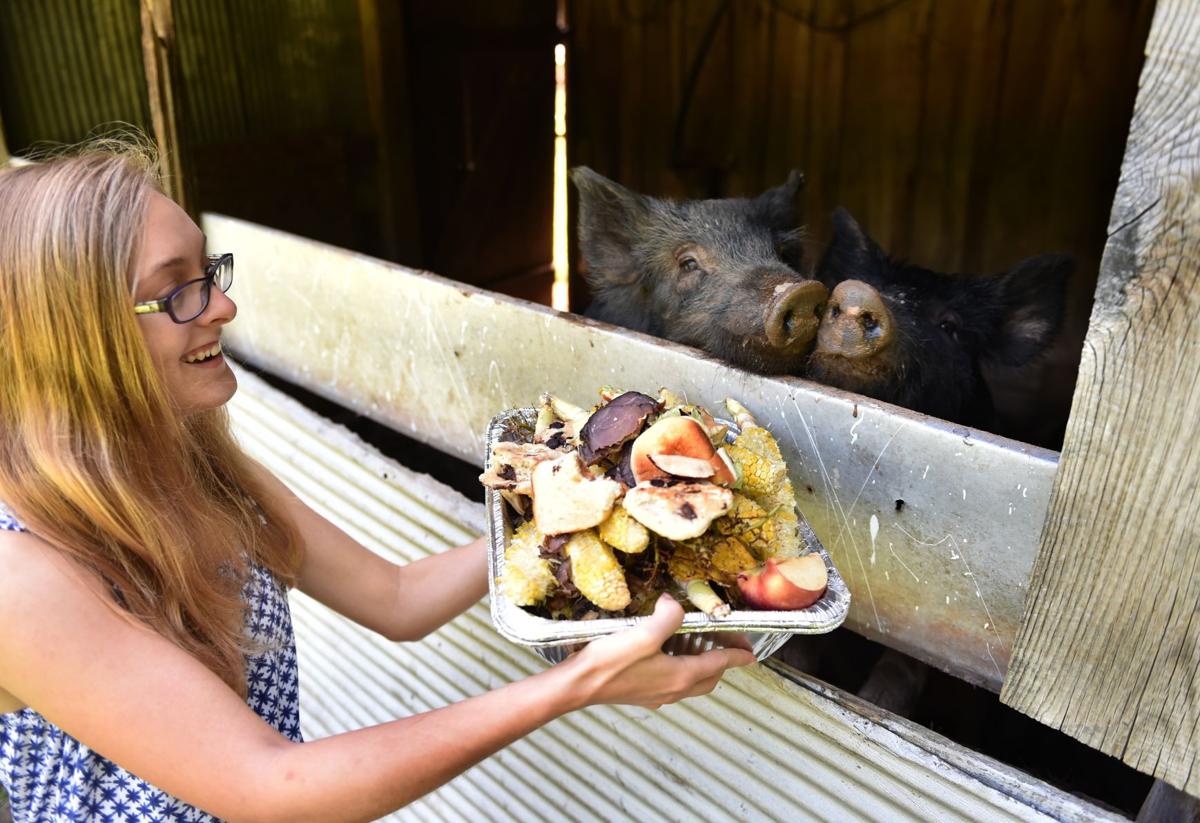 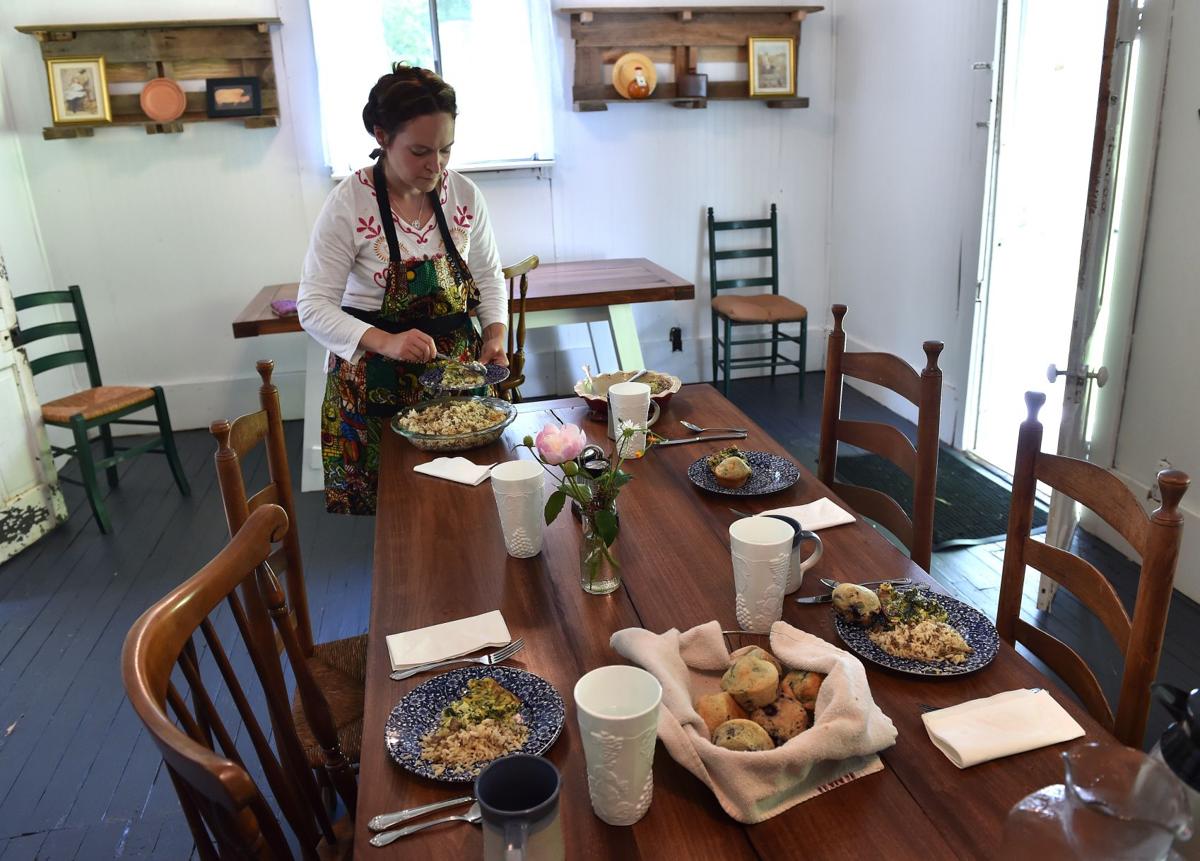 Angela Born serving breakfast in her Country Road House and Berries B&B. The ‘Berries’ part of the name refers to the property’s pick-your-own strawberry farm, whose first crop is planned for summer 2017.

Brooke Born straightens the pillows on a bed in the main house of Country Road House and Berries bed-and-breakfast in Clendenin.

Angela Born serving breakfast in her Country Road House and Berries B&B. The ‘Berries’ part of the name refers to the property’s pick-your-own strawberry farm, whose first crop is planned for summer 2017.

CLENDENIN — When Angela Born — then Angela McFarland — graduated from West Virginia Wesleyan in 1995, she donned a backpack and headed eastward to wander across Europe. After returning home, she then headed west to St. Louis University to complete her certification as a dietitian and to work on a master’s degree in nutrition and public health.

She thought she’d be back soon enough to her home state. But she met and married her husband, John Born, and they proceeded to settle in St. Louis and have six kids.

“The whole time we were in St. Louis I was homesick,” Angela recalled. “I missed being here.”

At age 42, she has finally returned to what she calls her “motherland.” But more than just coming home, she and her husband have also joined the state’s growing tourism and local foods movement with their Country Road House and Berries, located at 7 Kittyhawk Drive in rural Kanawha County.

The name of their 93-acre property, nestled in a quiet nook of the deep woods yet less than 10 minutes from Interstate 79, reveals its dual purpose as a bed-and-breakfast and — come next summer — a pick-your-own strawberry farm.

“Everyone needs to take a break with their family and do something fun. And picking fresh fruit is a memory maker,” said Angela.

She had been working as a pharmaceutical sales rep in St. Louis. But she couldn’t get the hills out of her system, even while living in a St. Louis subdivision. With the blessing of friendly neighbors, she and her husband kept chickens. And she has always grown a big garden and done down-home cooking.

Then, about a decade ago, she and a girlfriend drew up a business plan for a bed-and-breakfast.

“Our husbands are like, ‘What are you guys doing!?’” Angela said. But the property they had in mind was too expensive to renovate. She set the plans aside.

Then, last year, Angela and her husband — a South Bend, Indiana native — decided to get that woman back home to West Virginia and her extended family. (Angela’s father, Bill McFarland, runs Loop Pharmacy in St. Albans, where the family has deep roots.)

The couple found the perfect property, although it needed a lot to make it work. It came with a ramshackle farmhouse, a root cellar with a room above it and a whole lot of history, too.

“As I was thinking it through, God was like, ‘THIS is your bed and breakfast. This is it.’ And I’m like, ‘Yes! Finally, I get it back!’ I didn’t think I’d ever get it back again,” she said.

John found a good job as a Columbia Pipeline software engineer while the couple set to work drawing up plans for the property.

The question was simple and direct.

“What would it take to revamp the property? That’s all my husband needs, is a plan,” she said.

They renovated the old farmhouse into a cozy two-bedroom, one-bathroom B&B rental. The cellar house out back, with a root cellar burrowed into a hill and a room above it, has been transformed into a rustic single room with bathroom and can sleep four.

The limestone block foundations of the cellar house bear visible chisel marks from their original hewing out of the earth.

“In this area, the Amish would bring in wagon loads of limestone block. So, the early people out here would buy it and build with it,” said Angela.

On the right side of the field behind the cellar house stands ... well, there is no other way to put it — an historic outhouse.

“This is one of the Public Works outhouses that was funded by the New Deal. It’s in great shape,” said Angela.

She had the owner of Mountaineer Auctions in Clendenin verify that the outhouse was one of those built via Franklin Delano Roosevelt’s Public Works Administration, which fanned workers out across the country to put people to work constructing useful things.

“He said one of the things that’s indicative of a PWA outhouse, if you really get into the science of outhouses, not that I care, but there’s a poured throne cement floor and this special ventilation system,” she said.

Angela laughed. “So, if a guest would prefer to use the outhouse this experience is available to them.”

To the other side of the back yard rests a bite-size, single-room wooden structure.

“The story I got from the owners is that Pappy, he was the man that lived here, was driving home from work and they were building the interstate. And he saw that they had moved the post office because of the interstate construction. He asked if he could have it. And he carted it here.”

The Borns may eventually turn the tiny house into a rental in the future. “But for now, my 13-year-old son has taken it over and has made it his man cave,” she said.

Or perhaps his boy cave. She noted the computer on a side table.

“We don’t have a TV, so he tries to watch things out here,” she said.

The property’s transformation keeps the family hopping. The two strawberry fields to either side of the property’s driveway are ringed by the outward leaning wooden posts for an eventual seven-wire electric fence, designed to dissuade the hordes of deer expecting a strawberry dinner when the crop comes in. She got the idea for the design from an Extension office agent — the deer come underneath it and get a shock should they try to leap into strawberry fields forever.

“I talked to a strawberry grower in Kentucky at the small farms conference in February and he said he was thinking about trying that fence next,” said Angela. “And I thought, ‘Hmm ... if he’s thinking about it next, I should just go ahead and do it right off the bat.’”

As for her own aims, Angela never did get that master’s degree after her now 19-year-old daughter, Brooke, was born (the couple’s six children range in age from 6 to 19). Brooke helps her mother with the B&B, making beds, cleaning up and helping with the cooking and other chores.

As a dietitian, Angela is able to meet dietary and food-preference needs of her guests, from gluten-free foods to vegetarian options, as well as meeting the urges of carnivores with sausage and rice and other dishes.

“I don’t own the pigs,” said Angela. “My 12-year-old owns the pig and Ethan down the road owns the pigs. The plan is to breed the pigs and sell their babies so they can make lots of money.”

Guests need not feel guilty if they don’t finish their hearty breakfasts, she added. “We will give it to the pigs!”

Since the B&B just recently opened, the couple has been seeing guests through word of mouth, their website or tourists traveling along Interstate 79. They had a reservation from three college students motorcycling across the country. They’ve had a couple bridal showers. (The Baptist minister down the road has made himself available for weddings, but you’ll have to front him a tuxedo if you want him in one.)

The place is suitable for a wedding party of about 50 people or a small family reunion, she said.

They had one couple in their early 60s travel down from Ontario, Canada.

“They stayed with us for a couple nights and just loved it. My husband built them a fire. If we know someone’s going to be here for a period of time, we’ll make them a fire and let them soak up the evening time out here.”

Angela hopes to evoke for her guests the feeling she got when visiting her great-grandmother’s place in Brown’s Creek in St. Albans.

“Back in the day, you were really close in age to your grandmother and your great-grandmother because people had their kids at 16, 18 years old, as opposed to, like, 30, as they do know,” she said.

“So I grew up with my great-grandmother. We never had anything, produce-wise, that was bought in the store. It was always fresh or canned. I loved going out there and picking apples and playing with her chickens, her rabbits. Picking wildflowers.”

One of the reasons she was so excited to find a cellar house on her new property were her memories of her grandmother’s old root cellar.

“She had her food stored in there. In the summer, when you’d go visit her, she’d open the door and she’d sit right there and all that cool air would blow out on you. It was just like sitting under a fan, but you’re outside.

“I have real soft spot for cellar houses. It’s such a beautiful picture of rural West Virginia. The people that came out here? I mean, they really were roughing it. There was nothing out here. And to get to the city was a long journey. A lot of time you were riding your horse through the creek because there wasn’t a road.”

Born got her own love of rural gardening and cooking very young.

“When I was a girl in kindergarten, our teacher sent home seeds. And I was psycho-obsessed with these seeds! I begged my parents to make me a big bed so I could plant them. My great-grandmother even gave me seeds when I was in preschool. And I planted my first pumpkins and gourds at that time.”

The property also includes a deep well, whose fresh water will be used to water the strawberries, which she also hopes to sell on a delivery route and in area markets. If a guest wishes, she can switch the B&B plumbing system to well water.

“Roger at the auction house said there are people that live in the city that would be dying to take a shower in well water,” said Angela with a laugh. “I asked a few people that came here to stay and they were kind of looking at me like I had two heads. I just said I’m not going to ask anymore. But if somebody requests it we can switch it over and they could have that experience of showering in well water. If you want to feel like you’re way out in the country.”

The one thing she repeatedly hears from people who come to visit is how well they sleep, she said. “It’s very quiet here.”

Ultimately, she hopes the place channels the experience of being somewhere you might not have been for a long time.

“Here you might feel like you’re at your great-grandma’s house. And that’s what I want people to feel. Stop the grind and come out and just make some memories.