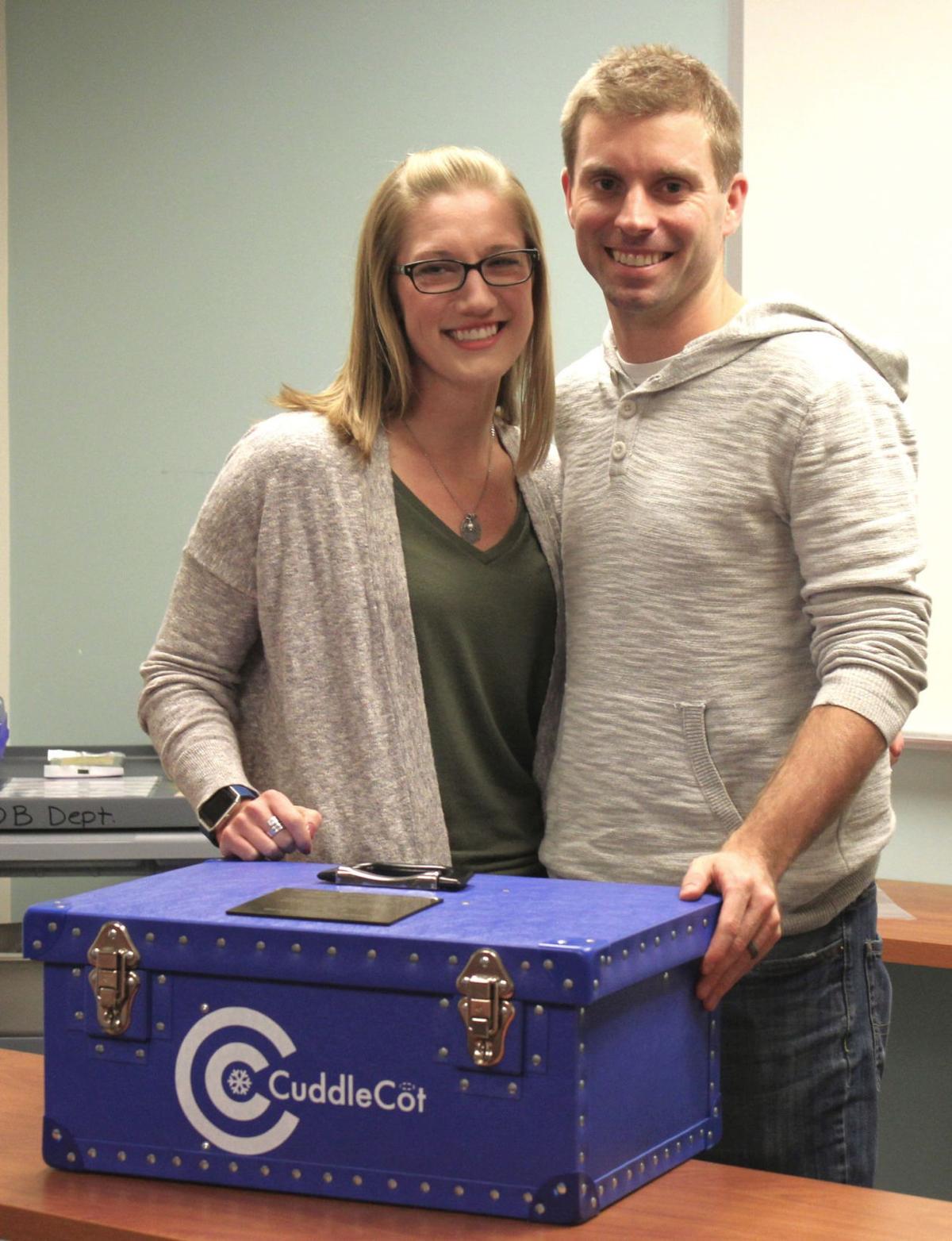 Katie and Johnny Black stand with with the CuddleCot they donated in their daughter’s name to Thomas Memorial Hospital. 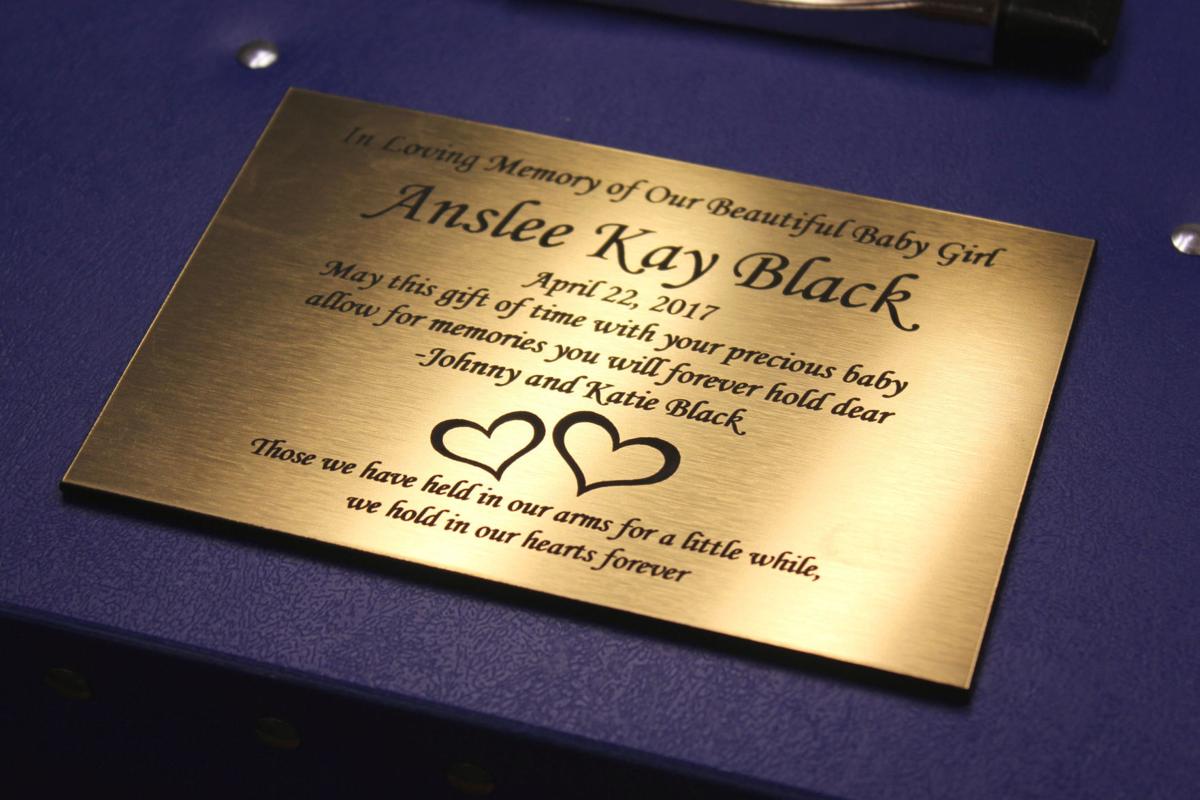 A plaque was placed on the carrying case of the CuddleCot by Katie and Johnny Black in memory of their daughter.

Katie and Johnny Black stand with with the CuddleCot they donated in their daughter’s name to Thomas Memorial Hospital.

A plaque was placed on the carrying case of the CuddleCot by Katie and Johnny Black in memory of their daughter.

To the parents of a stillborn baby, time takes on a precious meaning.

Those moments after their baby is delivered, when their lives together should be just beginning, will be the only moments they get to spend cradling their child, feeling his or her soft cheeks and little toes.

Katie Puterbaugh Black, a Scott Depot native, knows just how valuable these bits of time can be to a parent. Six months into her pregnancy, she and her husband, Johnny Black, lost their daughter, Anslee Kay.

On April 22, the couple found out Anslee no longer had a heartbeat. They were heartbroken.

“We were just in shock and in disbelief,” Johnny said. “It took a while for it to sink in.”

Katie and Johnny, residents of Nolensville, Tennessee, spent as much time as they could in their hospital room cuddling Anslee after her birth. They took pictures and introduced her to her grandparents, aunts and uncles, including those who rushed from West Virginia to meet her.

“She was tiny,” Katie said softly, fidgeting with the silver around her finger. “Our rings fit all the way around her foot.”

Two days later, they left the hospital without Anslee. Their final goodbye was the hardest.

“You have to start making decisions you’ve never considered or anticipated at that point, and you can’t even really process what just happened,” Johnny said. “It’s extremely difficult.”

In the middle of planning Anslee’s funeral service, Katie remembered a post she’d seen on Facebook months before. It showed a girl raising money to purchase a CuddleCot, a cradle-like device that keeps the body of a baby who died cold enough to preserve the tiny body for a longer period of time.

“That’s the key,” Katie said. “It’s still going to happen, but it slows it down.”

“Anslee could have remained in our room with us during the nighttime,” Katie said. “We decided to ask our nurses to take her each night, and they were able to put her in a colder room to help slow down the deterioration. It was tough each time they took her away, though.”

In the hours after a stillborn delivery, a CuddleCot would mean fewer partings for parents and their baby.

A cooling pad at the bottom of a bassinet stays in the hospital room with the family. The pad can also be removed and held while cradling the baby. In the face of so much loss, it can offer comfort. But the nurses at the hospital where Katie delivered her daughter had never heard of the CuddleCot, and they didn’t know they could borrow a unit from a nearby organization.

“I don’t think the nurses taking Anslee and putting her in the colder room slowed the changes down nearly as much as a CuddleCot could have,” Katie said.

Katie and Johnny knew what it was like to long for more time with their baby girl. They wanted to ensure future families in a similar situation would have as much time as they could.

The couple set out to raise $3,000 to cover the cost of one CuddleCot for their local hospital in Tennessee. Through a YouCaring fundraiser, they asked friends and family donate to the cause in lieu of flowers.

Each time a person donated, the Blacks received an email. It was like a “little light,” Katie said.

Within days, they surpassed their goal. Katie and Johnny decide to increase it to $6,000 and purchase a second CuddleCot for another hospital, Thomas Memorial, near Katie’s hometown in West Virginia.

They surpassed their second goal three weeks after Anslee’s birthday.

“There was a little bit of positivity around that time that was so negative and difficult,” Johnny said. “It made us feel loved and supported.”

To Katie and Johnny, donating the CuddleCots meant carrying on Anslee’s name.

“One of our biggest fears is that our daughter will be forgotten,” Katie said. “We also hate that we won’t get to hear her name very often.”

In a visit to Thomas Memorial over Thanksgiving, Katie and Johnny dedicated the CuddleCot in Anslee’s name and spoke to hospital staff in the obstetrics and mother-baby unit.

Staff reassured Katie that nurses will be trained to use the CuddleCot and offer it to patients. The box will be stored where Thomas Memorial keeps the majority of its baby supplies, so as not to be forgotten.

Katie and Johnny placed small plaques on its carrying case and cooling box with Anslee’s name and birthday.

One reads, “A moment in our arms, a lifetime in our hearts.” The other says, “May this gift of time with your precious baby allow for memories you will forever hold dear.”

The couple hopes the unit will help those who use it understand that someone else has been in their shoes.

Two days of memories and professional photographs may be all they have now, but their daughter’s brief life has taken on a new, comforting meaning for other families.

From the Kitchen: A post-Thanksgiving breakfast treat