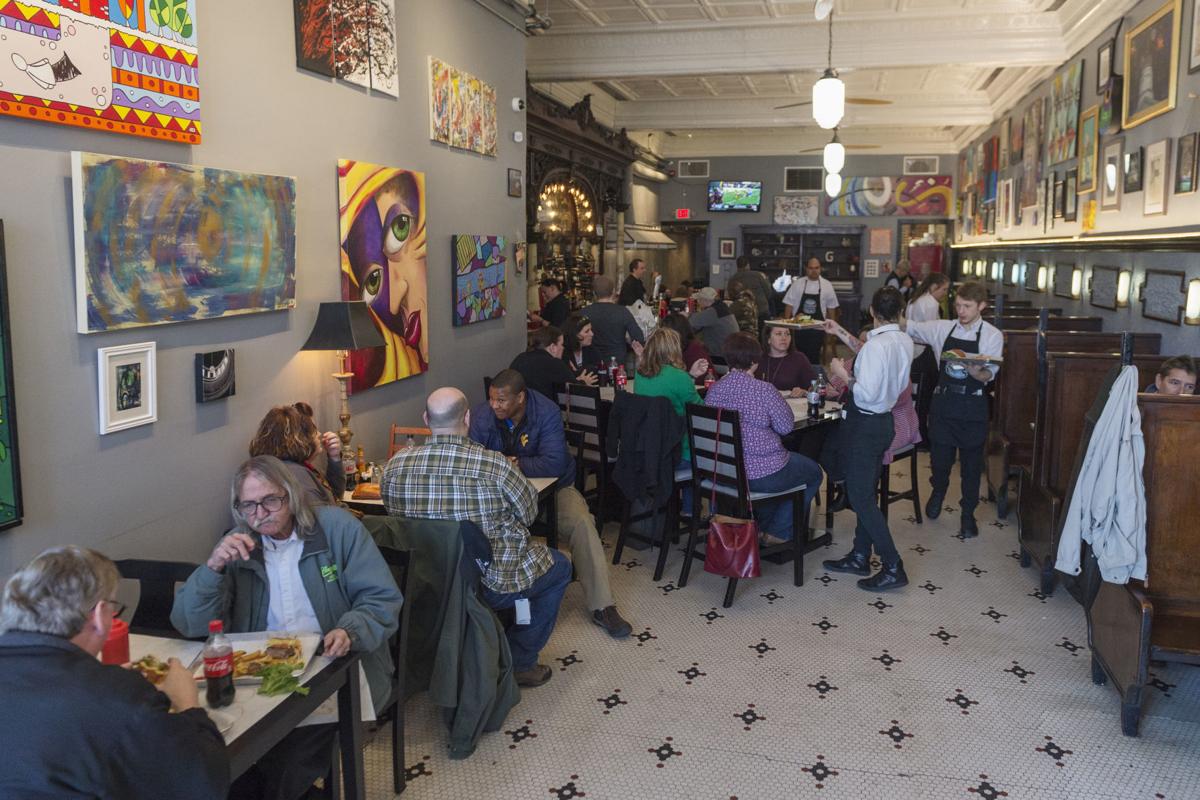 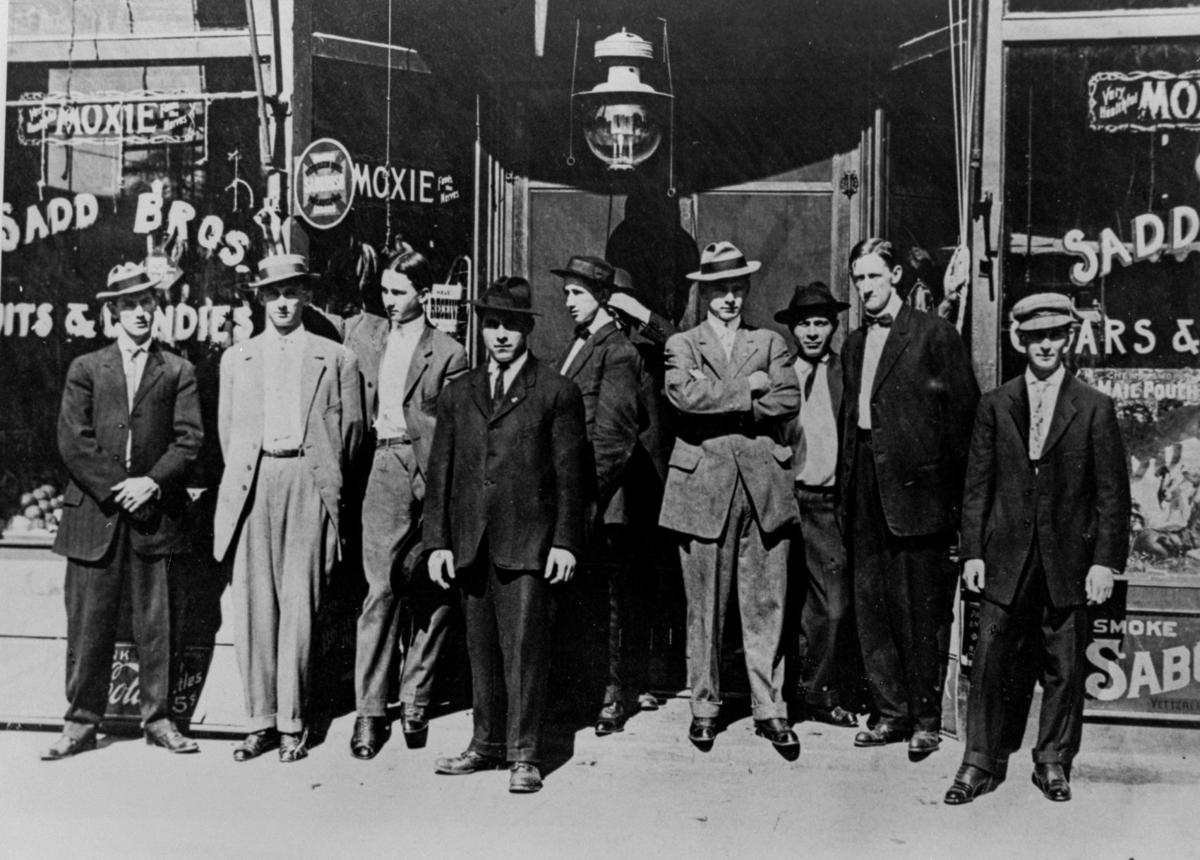 Michael Sadd (fourth from left) and John Sadd (third from right) owned Sadd Brothers confectionery, at 207 Washington St. West, in the early 1900s with their brother, Shaker Sadd. The location is now home to Gonzoburger. 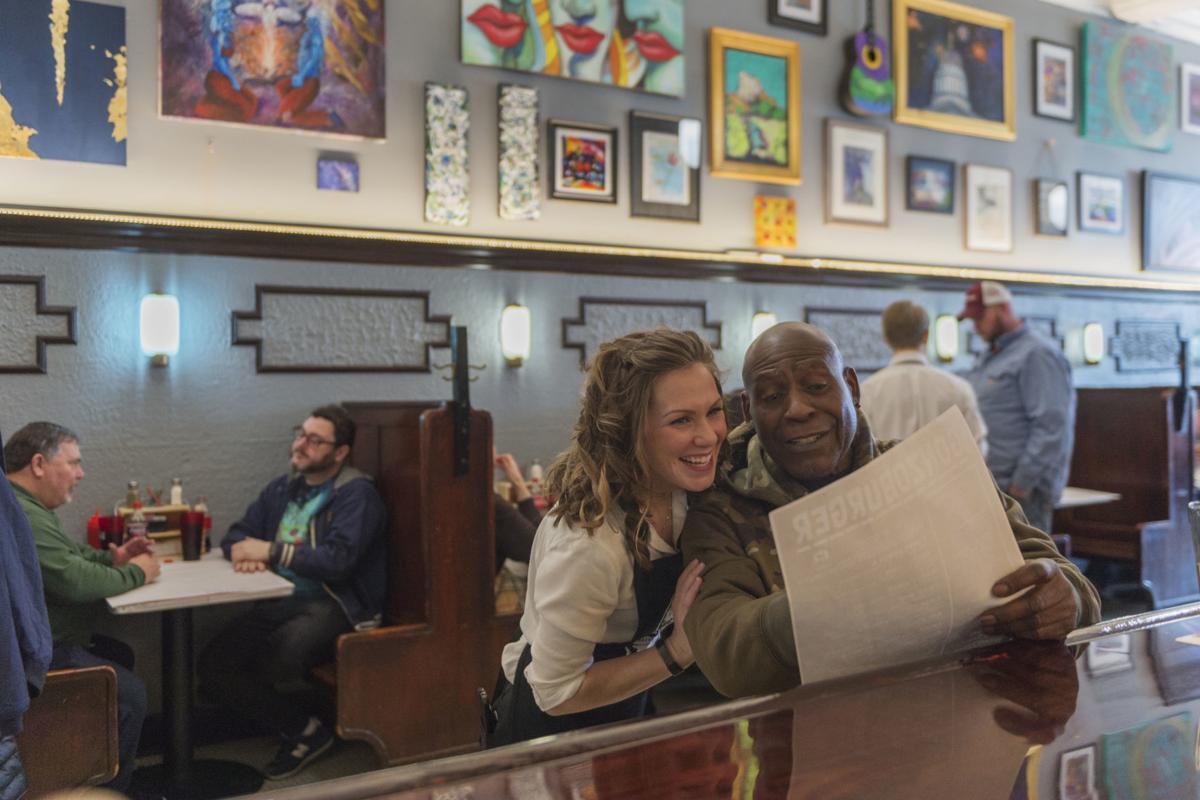 Felicia Bess laughs with Robert Burton as he asks a question about the menu at Gonzoburger. 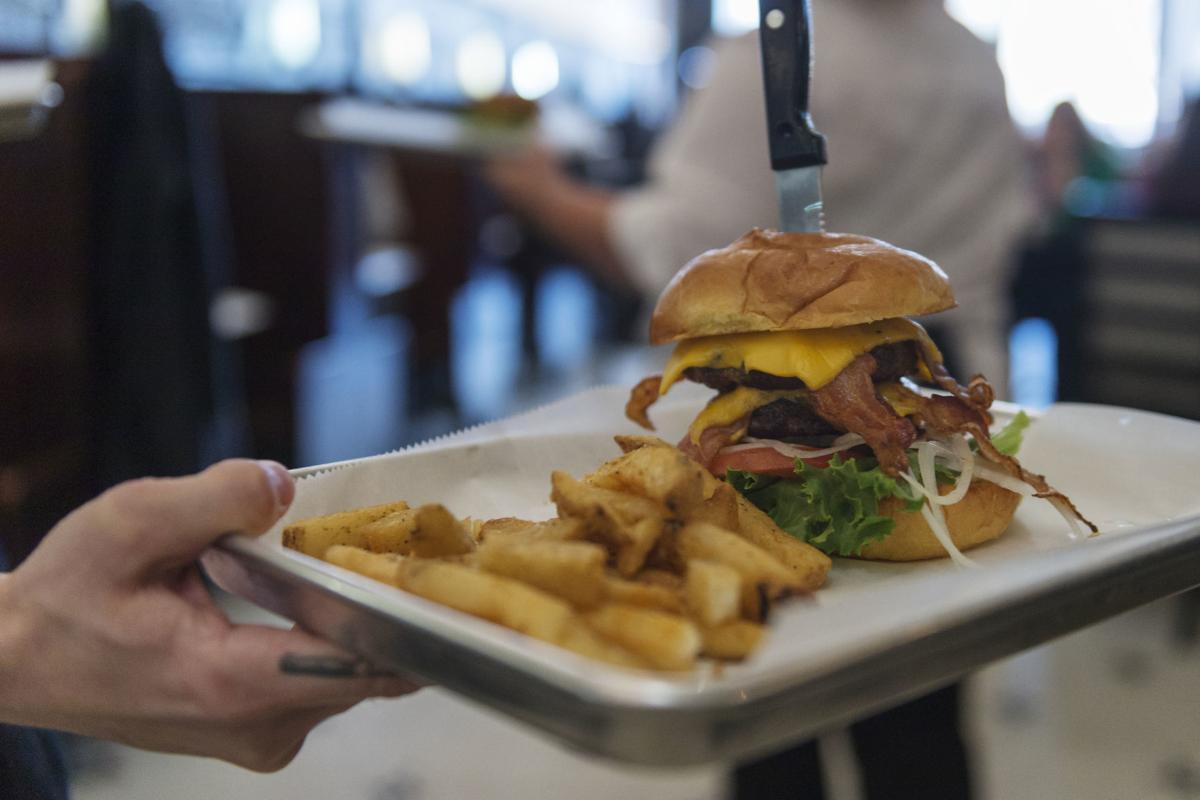 The El Jefe burger at Gonzoburger. 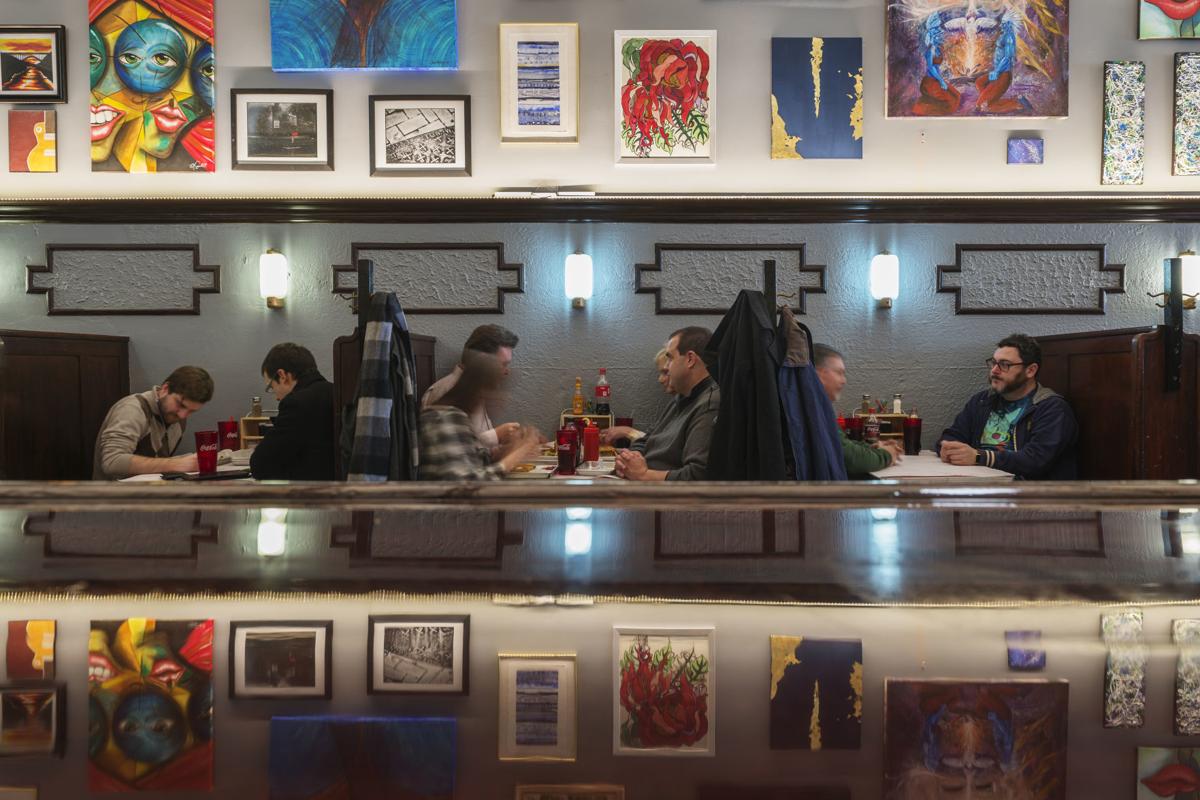 Lunchgoers and wall art are reflected on the bar counter at Gonzoburger, located at 207 Washington St. West. 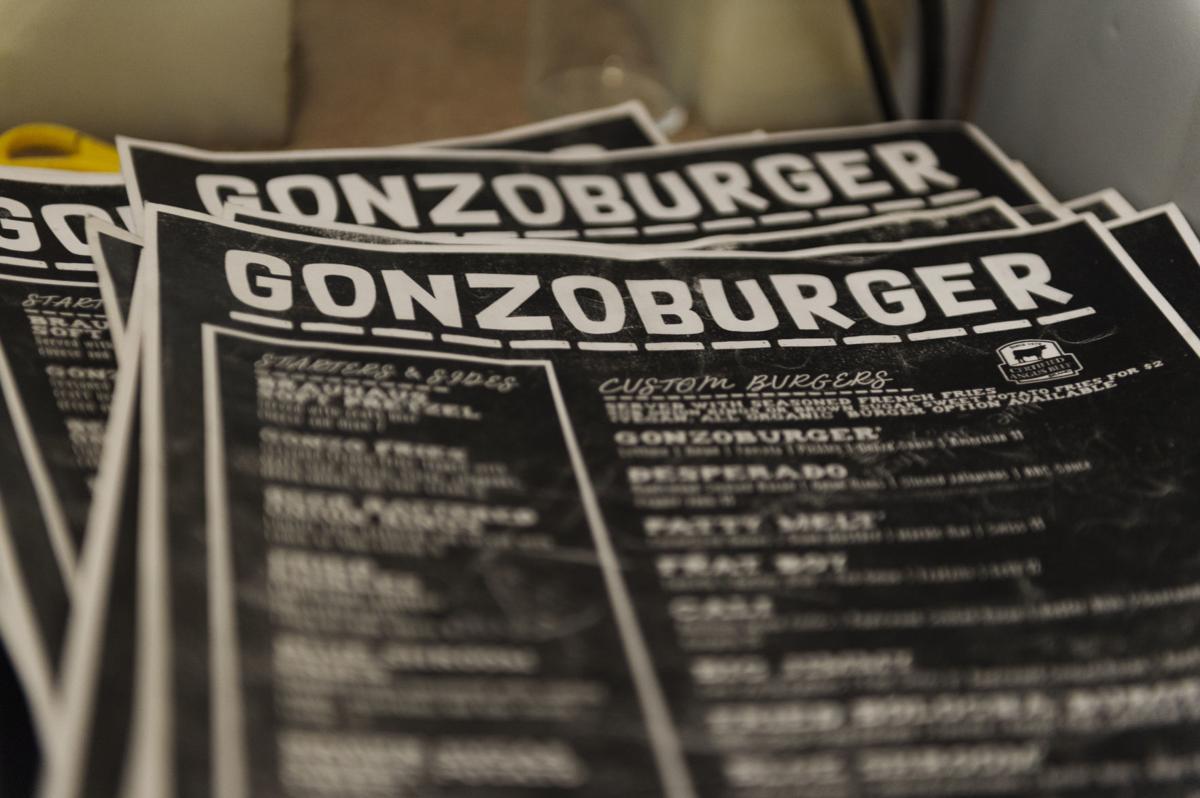 Michael Sadd (fourth from left) and John Sadd (third from right) owned Sadd Brothers confectionery, at 207 Washington St. West, in the early 1900s with their brother, Shaker Sadd. The location is now home to Gonzoburger.

Felicia Bess laughs with Robert Burton as he asks a question about the menu at Gonzoburger.

The El Jefe burger at Gonzoburger.

Lunchgoers and wall art are reflected on the bar counter at Gonzoburger, located at 207 Washington St. West.

For many, a trip to Gonzoburger is like a walk, or bite, down memory lane.

Aside from the food — hamburgers galore, topped with everything from bacon and onion rings to a fried egg — Frank and Julia Gonzales’ new restaurant is reminiscent of the past.

Gonzoburger is located at 207 W. Washington St., in Charleston. The site was first home to Sadd Brothers confectionery. It was built in the early 1900s by brothers Shaker, John and Michael Sadd. Later it became Chris’ Hot Dogs, a beloved institution. Today, ordering a brew means gazing across the marble bar, handmade by a Sadd family member in the early 1900s.

John Sadd’s son, David, was born in 1929 and went there as a young boy. It was always busy, he said.

His uncle Michael, who he remembers as “quite an artist,” painted murals of West Virginia scenes across the walls. They remained there until the restaurant passed ownership through many hands. The Christo family painted over them, he said.

A photo of the Sadd brothers along with family and friends is hung near the back of Gonzoburger, near a mural reminiscent of the photo. Frank Gonzales commissioned artist Jesse Corlis to paint the scene.

But most people with memories of the place recall spending lunch in wooden booths and a man who lined hot dogs up his arm.

“Customers will tell me these stories about when they used to come here with family members back after football practice, or baseball practice,” Gonzales said. “They just have this amazing recollection of the space, which goes so much further than my knowledge.”

The hood from Gus Christo’s hot dog business remains. He was known for lining hot dog buns from his wrist to his bicep, plopping a frankfurter in each, then scooping them with toppings of homemade chili and coleslaw.

Customers remember him standing near the hood as he conducted the performance, said Restaurant Manager Dave Haden. Occasionally, they’ll ask if the hood still works

“The hood right here, it’s a part of what this place was and is and continues to be,” Haden said.

“The history of this place is something very special to me, personally. I used to come in here when this was Chris’ Hot Dogs.”

The original wooden mantle above Gonzoburger’s bar is something Haden remembers admiring vividly as a young child.

“It’s just a beautiful piece of artwork that even as a young man, a young kid, I got it,” Haden said. “It was something unique and special.”

In 1990, the building had been home to Chris’ Hot Dogs for more than 40 years when owner Christo died of a sudden illness.

His wife reopened the business only a couple of years after Gus’ death, but it did not last long.

The building sat vacant for many years before the Gonzales’s made the decision to open a burger joint. Keeping the historical details of the restaurant was always part of their mission. It took about 13 months to bring the building up to code and add a new layer of polish, which led to a highly anticipated opening last month.

Frank Gonzales and his team tore off the back of the building to add an extra exit, new restrooms and kitchen, and add a sprinkler system. They extended the facade of the restaurant to the sidewalk.

Despite many obstacles, they were able to keep the marble bar and its mantle, wooden booths, light fixtures, ceiling and tile floor.

They also added their own, new touches: local consignment art, a wooden bar top and tables, and a tap for the local beer. Right around the corner? Mi Cocina de Amor, their first restaurant which opened in 2014.

“We have 54 employees now between the two restaurants, which I think is another big part of the story to me,” he said. “It’s 29 people that maybe didn’t have a job.”

To him, Gonzoburger is more than just a burger and fries on a silver tray.

“Of course, going out to eat is centered around having a good meal and that passion for cooking good food, that’s the most important thing to me,” he said. “But I think it goes so much farther than that these days. If you want to captivate [a customer], you have to captivate all of their senses from the minute they walk in the door.”

It just so happens that Gonzburger may have added a sixth sense — nostalgia.