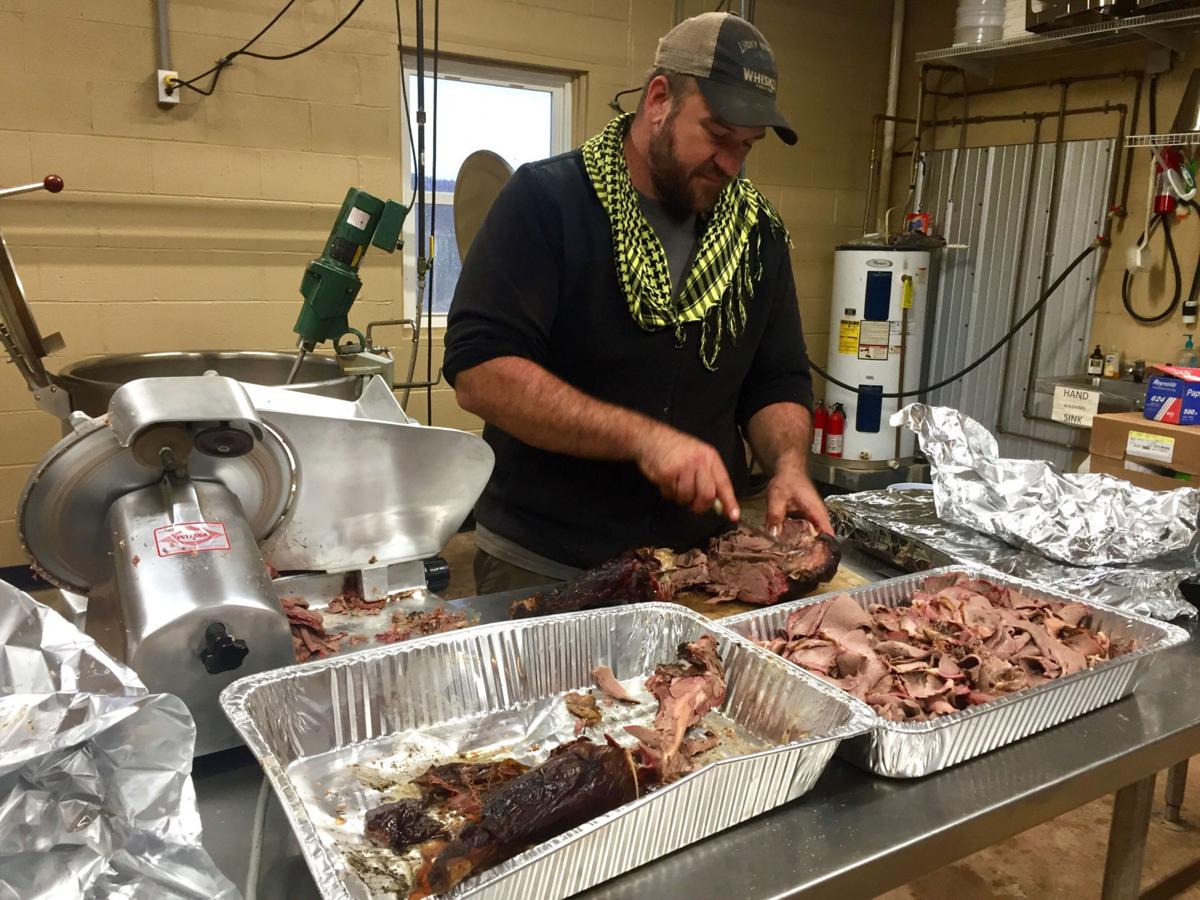 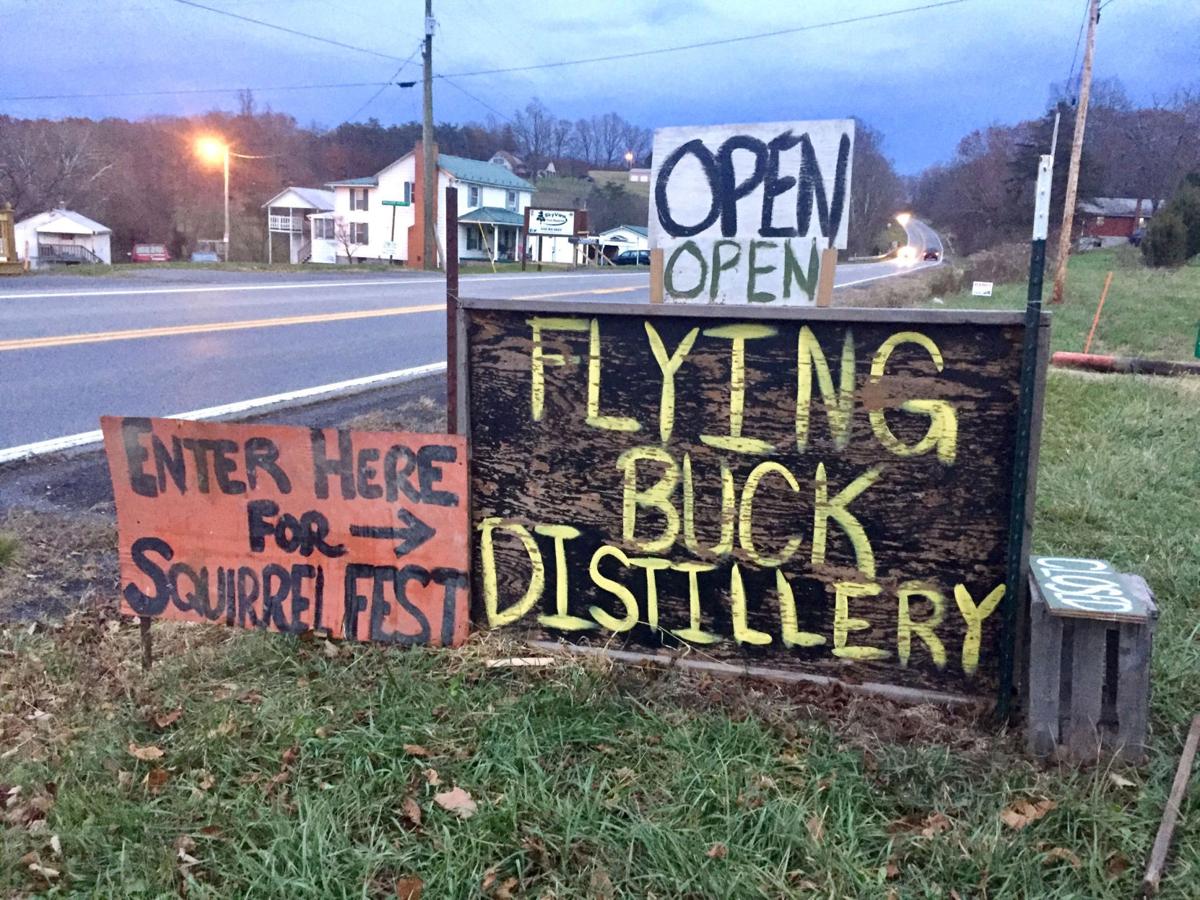 A sign points to the entrance of Squirrel Fest at Bigg Riggs Farm. 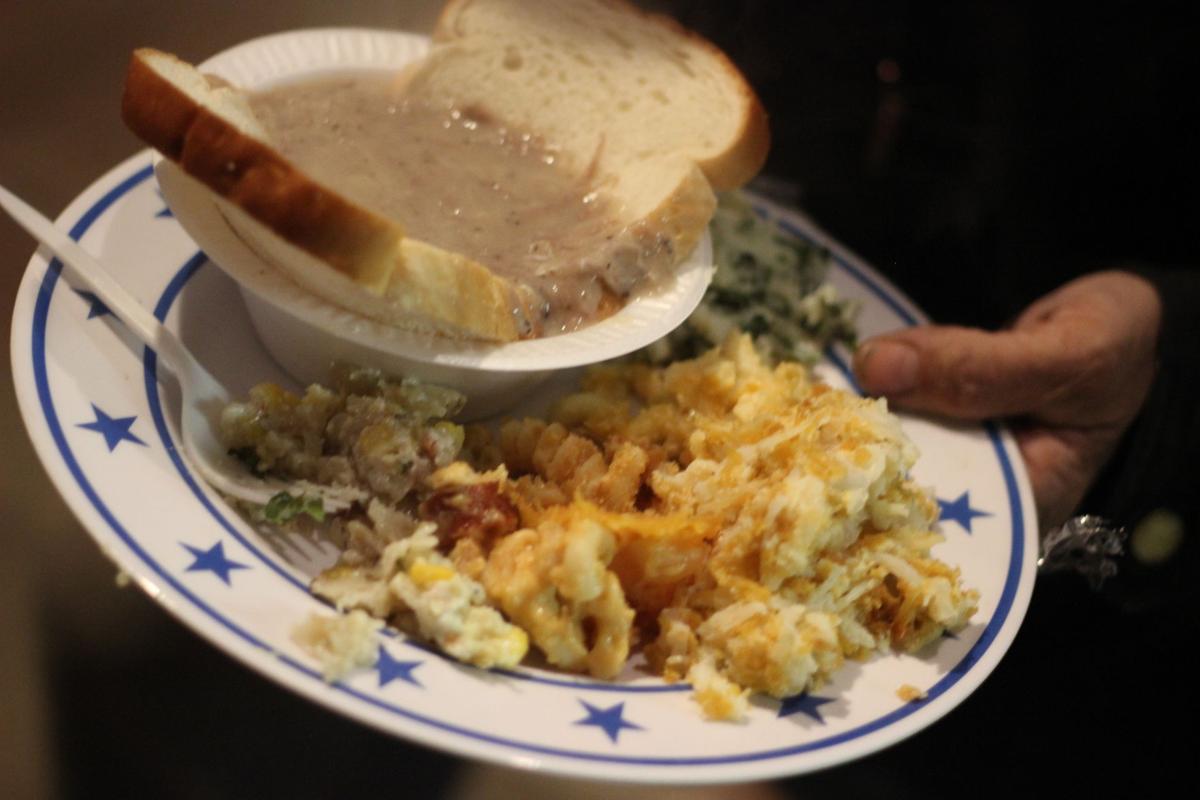 A plate of food at “Squirrel Fest,” including a bowl of bread and squirrel gravy. 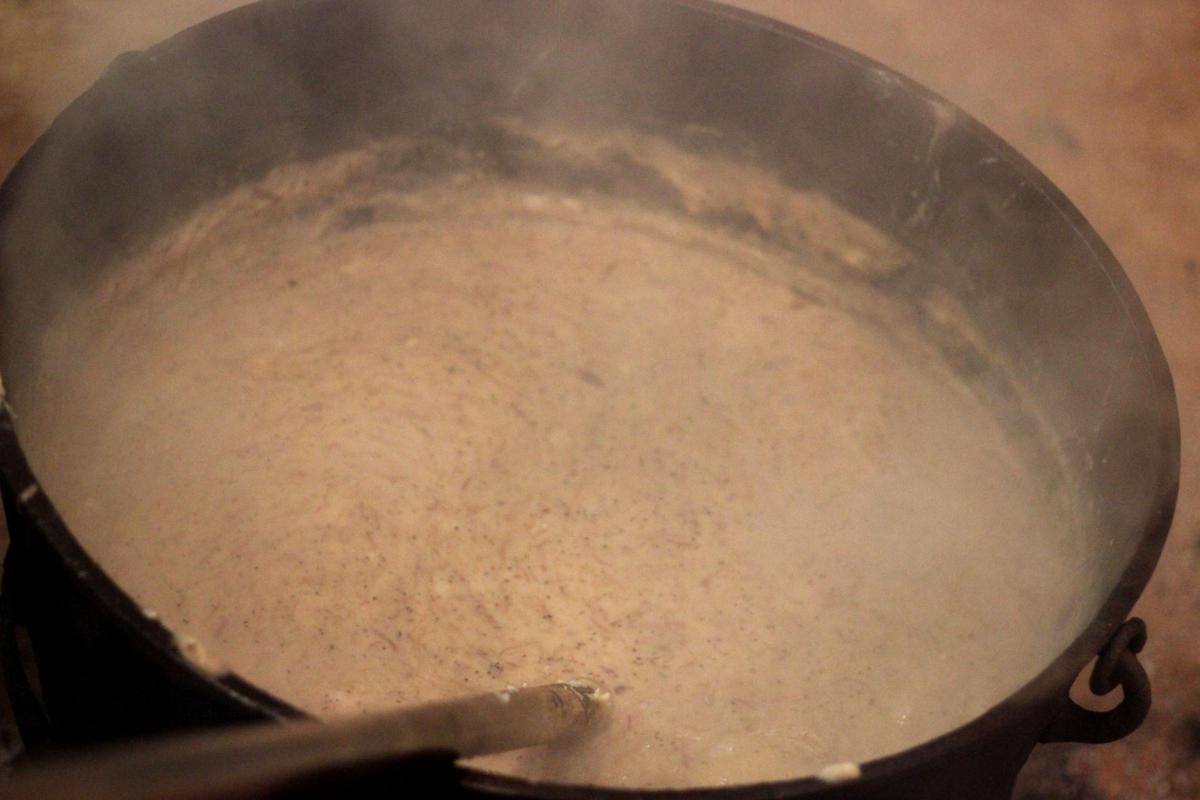 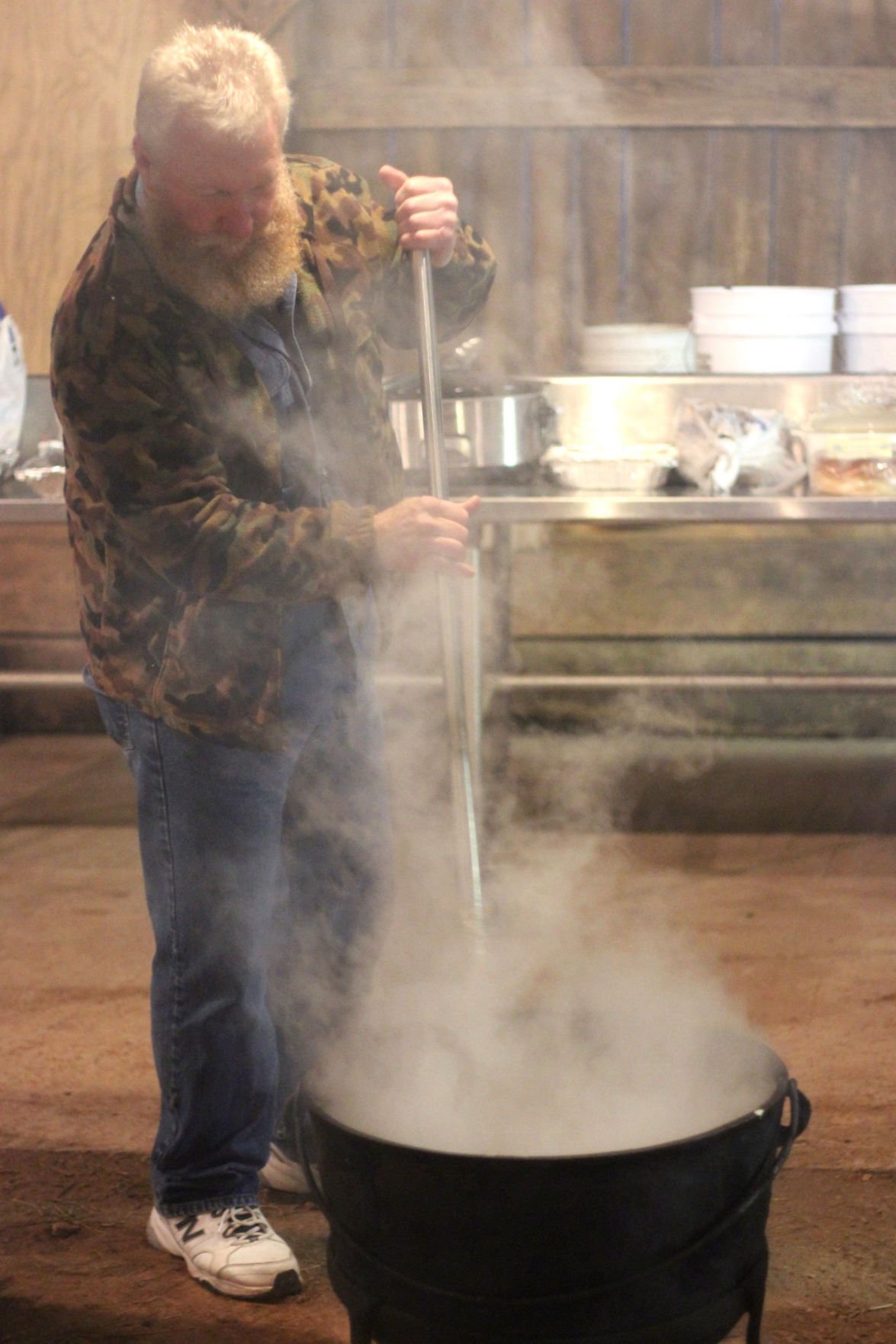 Mike Shirk of Moorefield stirs a pot of squirrel gravy. “It isn’t squirrel gravy if you don’t find at least one hair in it,” he said. 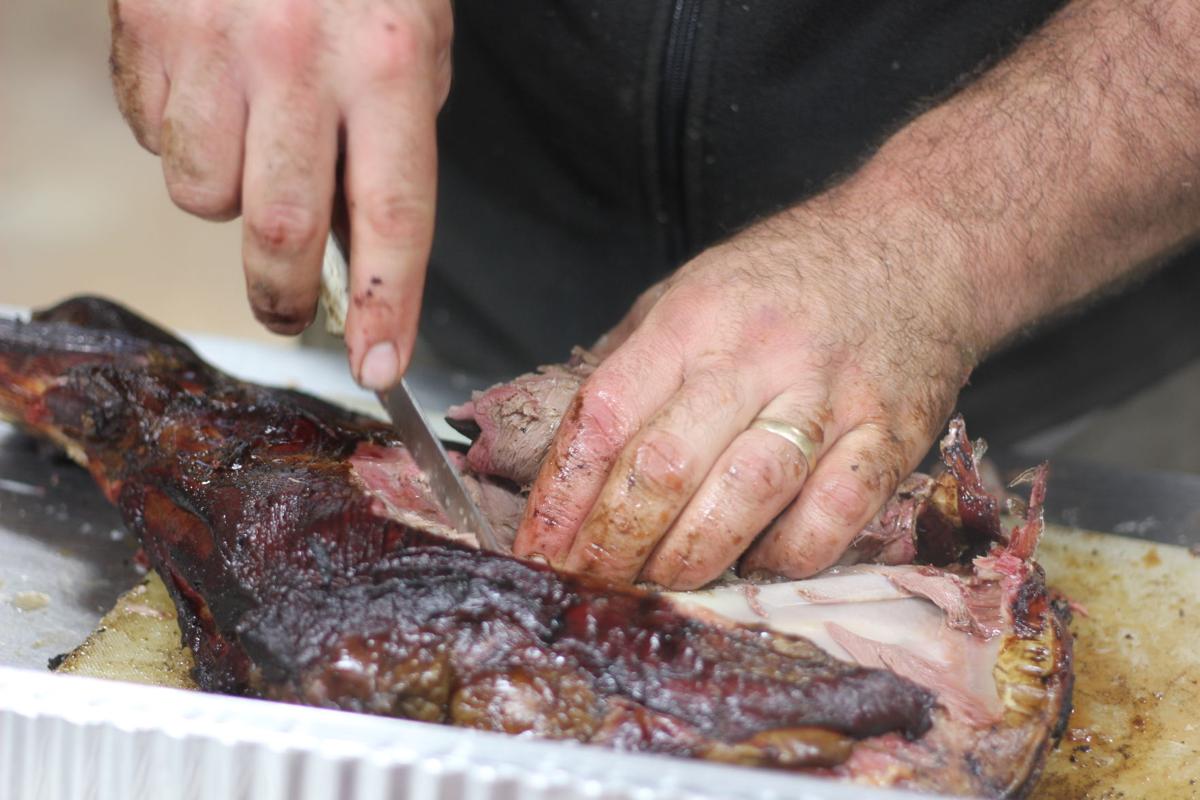 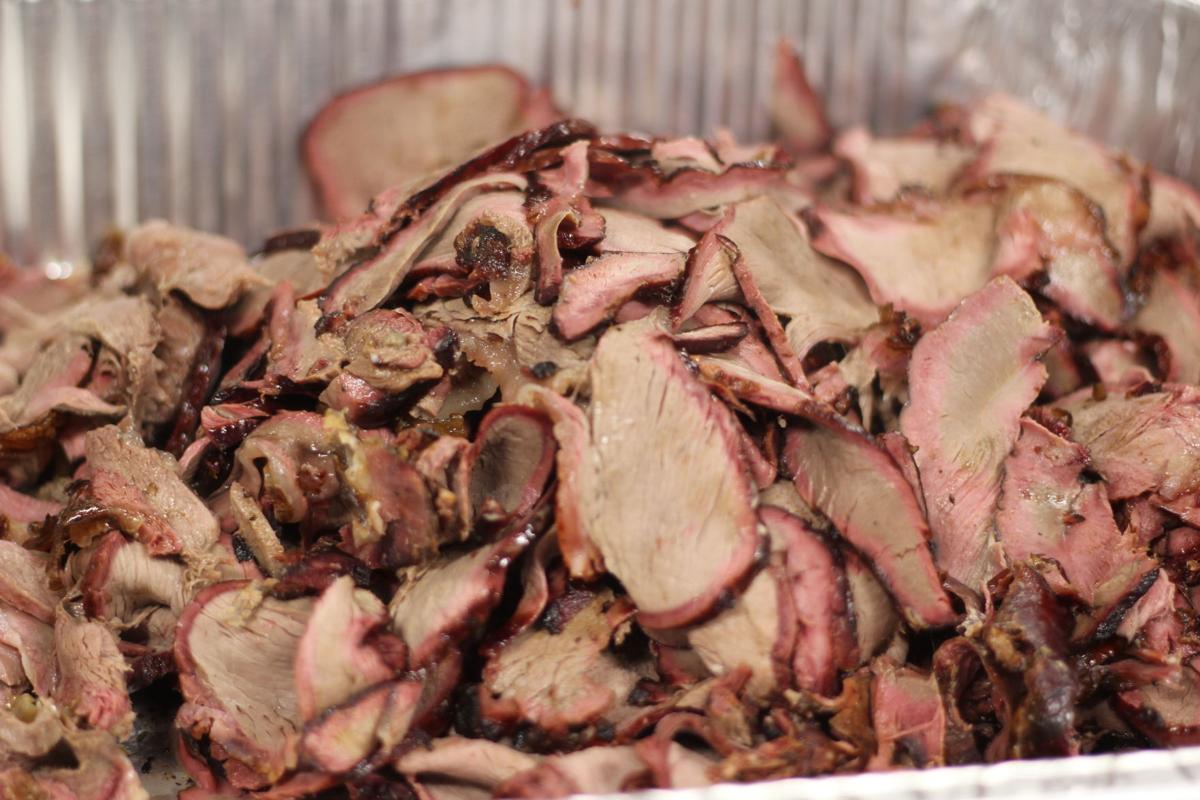 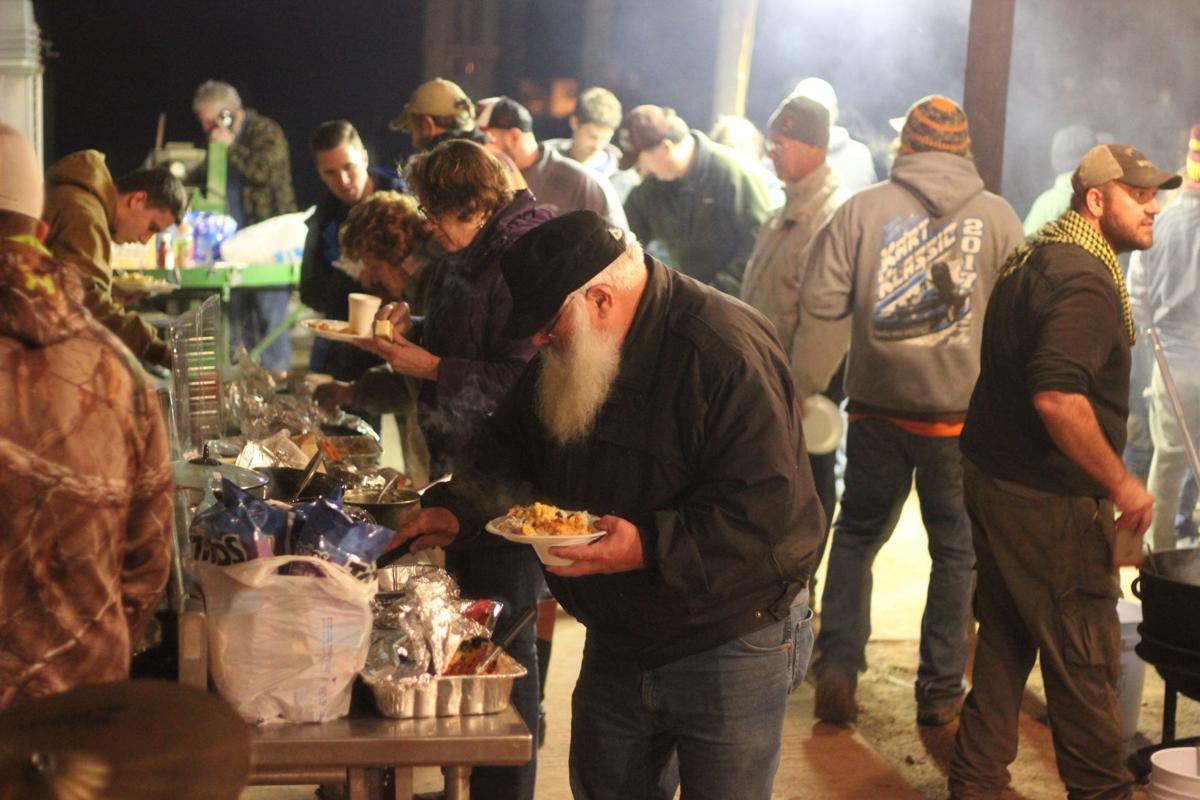 Fans of squirrel and other wild meat gather to eat at Squirrel Fest at Bigg Riggs Farm in Hampshire County.

A sign points to the entrance of Squirrel Fest at Bigg Riggs Farm.

A plate of food at “Squirrel Fest,” including a bowl of bread and squirrel gravy.

Mike Shirk of Moorefield stirs a pot of squirrel gravy. “It isn’t squirrel gravy if you don’t find at least one hair in it,” he said.

Fans of squirrel and other wild meat gather to eat at Squirrel Fest at Bigg Riggs Farm in Hampshire County.

On a recent fall weekend, down a winding road in Hampshire County, squirrel gravy and critter stew were on the brew.

The dishes were in preparation for the 18th annual Squirrel Fest at Bigg Riggs Farm.

Mike Shirk, cousin of Trey Smith, who co-owns the farm’s property, stirs the pot of gravy, which on this day included opossum and raccoon.

“It isn’t squirrel gravy if you don’t find at least one hair in it,” he said, laughing.

Despite this “hairy” allegation, squirrel gravy is favored by those who regularly hunt and cook the creature.

Some Squirrel Fest attendees say it just tastes like chicken, but Shirk says it’s the “best gravy of all the gravies.”

The “treat” is a staple at Squirrel Fest, which began when the farm’s owner, Calvin Riggleman, invited a group of his friends, also squirrel hunters, to his home to honor the hunting season.

“Squirrel season for me and my friends is always a huge deal,” Riggleman said. “It was the first season that came in.”

“Everybody would come home for the holidays around Thanksgiving for deer season, so I said, ‘Let’s get together and cook all of these squirrels.’”

The first year was only Riggleman and four of his friends. Over the next several years, it became a way to reconnect while friends were home for the holidays.

One year, Riggleman opened the event to the community and used it as a way to show off his farm.

Now, locals and friends of the farm show up each year to share covered dishes, listen to music and meet their neighbors. The event is free and open to all ages.

Riggleman and workers on the farm work together to prepare the highlights.

“I’m not a butcher by any means,” he said, as he sliced into the leg of smoked venison, one of Squirrel Fest’s main dishes.

This year, Squirrel Fest required a whole deer, two pork butts, some chicken, a pot of chili and, of course, squirrel gravy.

Riggleman doesn’t have time to hunt squirrels as much anymore, so neighbors help him acquire critters for the meal.

Selling squirrels is illegal in West Virginia. However, selling the tails to make fishing lures is allowed.

According to Curtis Taylor, a squirrel fan and former Chief of Wildlife Resource at West Virginia Division of Natural Resources, West Virginians do not hunt squirrels the way they used to.

“Squirrels used to be a big thing in McDowell County,” Taylor said. “That was the only game in town and that’s when we killed more than a million a year.”

Deer hunting is much more popular nowadays, he said.

He says the flavor of squirrel depends on how it’s cooked, which is why it’s important to cook it correctly.

“Squirrel is one of the best meats you can put in your mouth,” he said. “It has such a unique flavor.”

His favorite breakfast is squirrel, gravy and biscuits.

“It took me 25 years to perfect my mother’s squirrel gravy,” Taylor said.

However, he doesn’t have the recipe written down and wouldn’t be able to share it with you.

Instead, he provided the Gazette-Mail with a few recipes he’s found in squirrel cookbooks over the years.

Recipe from "A Field" by Jesse Griffiths

In a large pot over high heat, combine the squirrels, onion, cloves, bay leaf and two gallons of water. Bring to a simmer. Lower the heat, skim any foam that rises to the surface and simmer the squirrels until tender, 3 to 4 hours, adding water, if necessary, to keep them submerged.

Strain the stock into another pot and discard the onion, cloves and bay leaf. Reserve two quarts of stock and keep warm over low heat. Cool and refrigerate any leftover stock for another use. Allow the squirrels to cool slightly and shred the meat. Discard the bones and refrigerate the meat.

In a large heavy-bottomed pot or dutch oven, heat the butter over medium heat until melted. Add the carrots, diced onions and celery and cook until tender, about 10 minutes, stirring occasionally.

Add the flour and cook two minutes more, stirring often. Add about 2 cups of the reserved stock to the pot and stir until thickened. Continue to slowly add the remaining warm stock. Keep the pot at the barest simmer — do not boil.

To make the dumplings, in a large bowl, stir together the flour, baking powder and salt. Add the cold butter and pinch together with the flour until it is in small, pea-size pieces. Add the milk, egg, herbs and lemon zest and stir until just combined, gently and briefly kneading with your hands.

Add the shredded squirrel meat tot he warm stock, and then drop golf ball-size pieced of the dumpling mixture into the pot. Cover with a lid and let the mixture simmer for another 20 minutes, or until dumplings are fluffy and cooked through. Season with salt and pepper. Serve hot.

liquid to cover (half water, half dry white wine)

2 carrots, each cut into four chunks

2 leeks, sliced, or one onion

Put the squirrel pieces, liquid, bay leaves, carrots, leeks or onion, parsnips and cloves in a big sauce pan. Bring to a boil, partially cover, and simmer for about an hour.

Remove the squirrel pieces and set aside to cool. Strain and retain the liquid. Also retain the vegetables but fish out and discard the cloves and bay leaves.

Remove the meat from the squirrel pieces and cut up in 1-1½-inch chunks.

Using the Bisquick box instructions, make up a shortcake dough ball but without the sugar.

In a saucepan combine the 6 tablespoons each of butter and flour; cook over a low fire for a minute or two. Off heat, stir in the milk and the squirrel broth and Worcestershire, then cook over low to medium heat until it thickens. Stir in salt, pepper, and thyme, and then the cream. Just heat through, but do not boil.

In a straight-sided casserole, spoon in a bit of the sauce, then lay in the squirrel pieces and mix in the carrots, leeks, and parsnips, and scatter the small cooked onions around. Add the remaining sauce.

Knead your crust dough seven or eight times and pat it out on a floured board until it is just a bit greater in diameter than your casserole.

Lay it out on top of the sauce, squirrel and vegetables. Brush with melted butter. Crimp the edges just for looks.

Bake in a preheated 425° oven for about 30 minutes or until crust is browned.