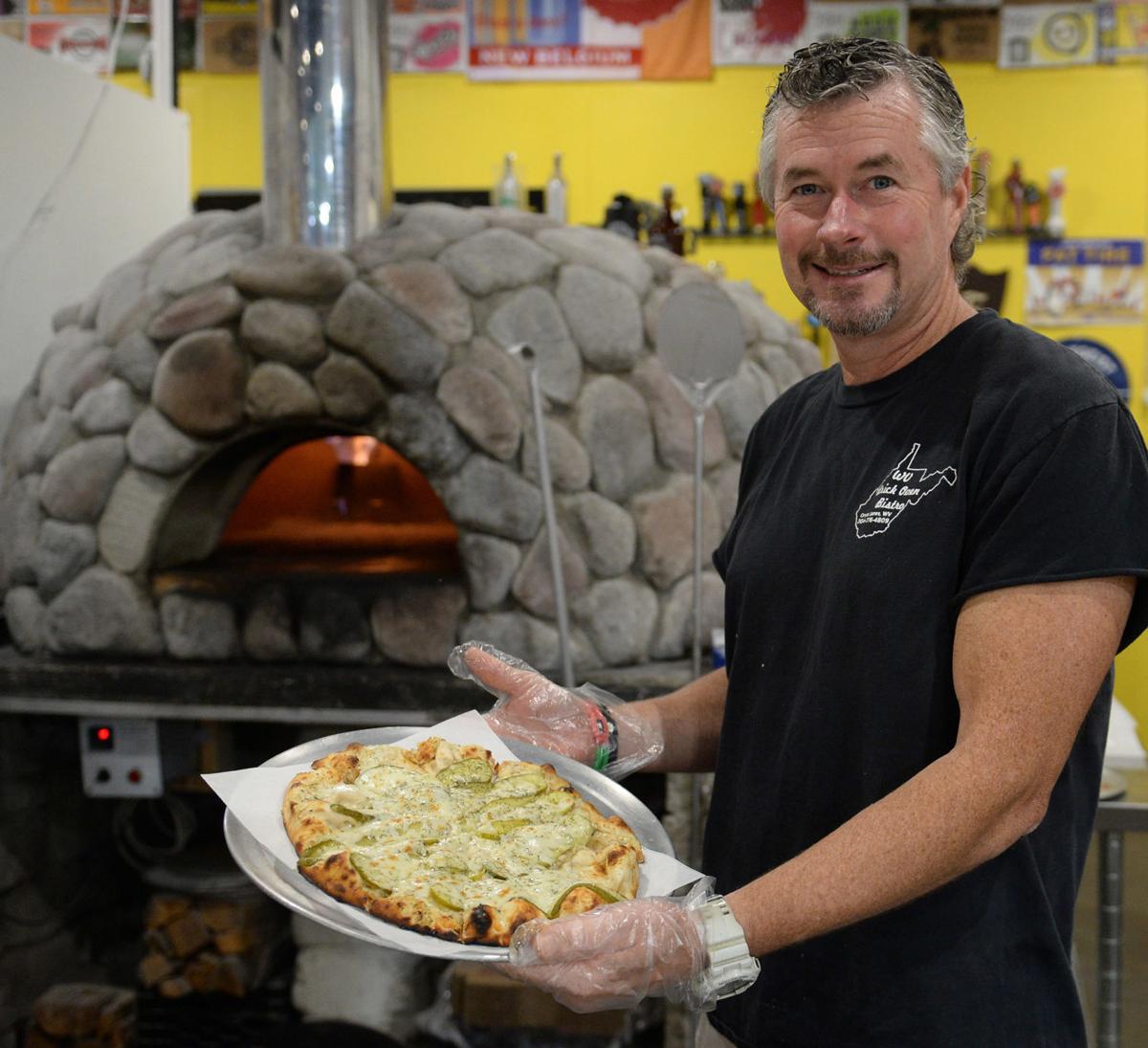 WV Brick Oven Bistro owner Ron Cole said he got the idea for pickle pizza from an article on social media. He figured if it worked in New York, why not here? 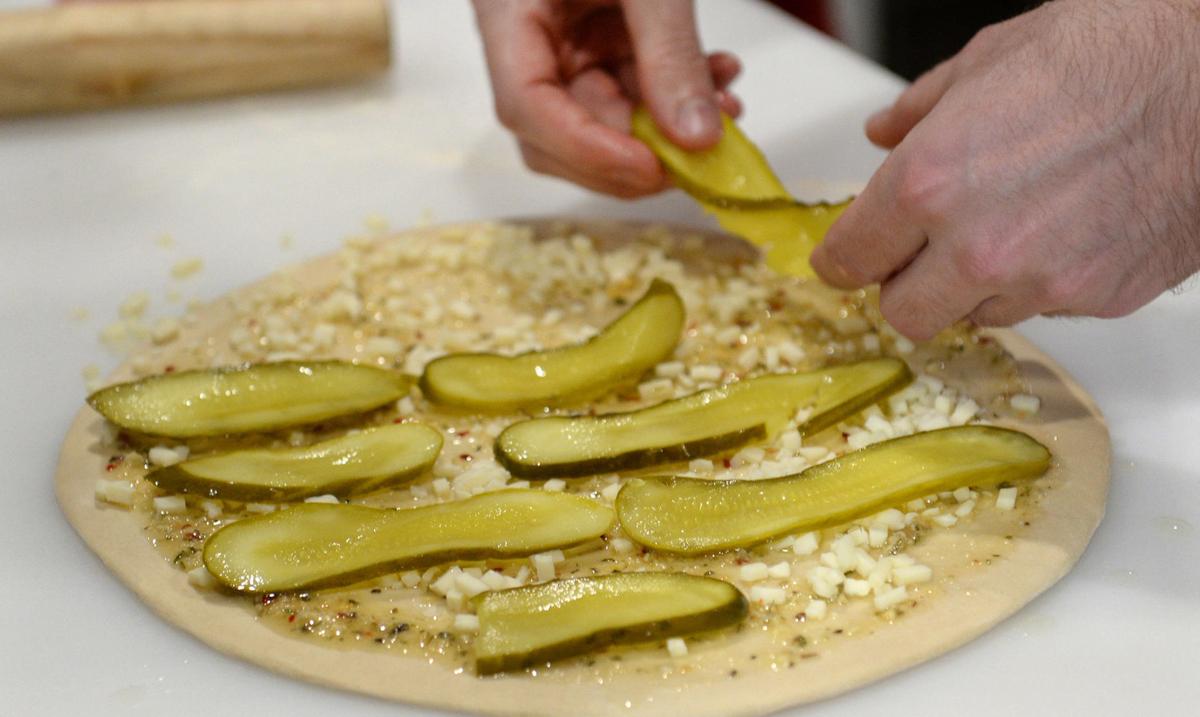 The pickle pizza at WV Brick Oven Bistro in Cross Lanes begins with a layer of Parmesan Garlic sauce and then dill pickle stackers. 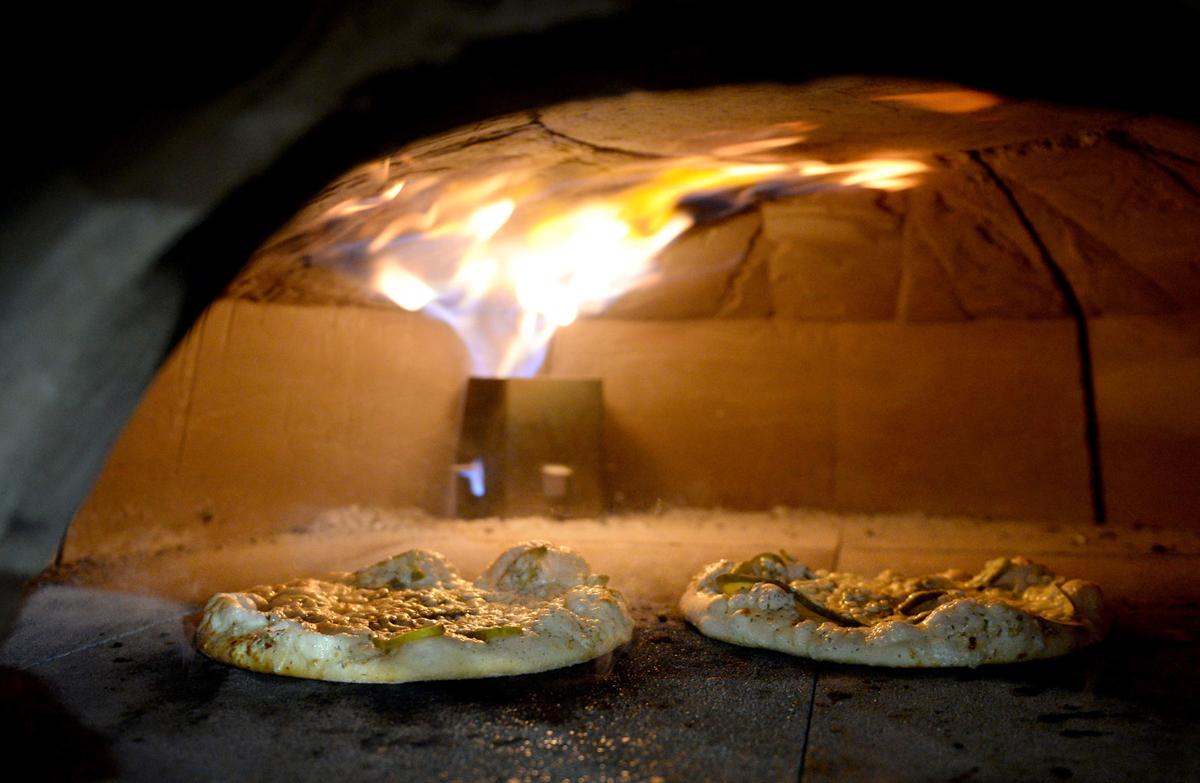 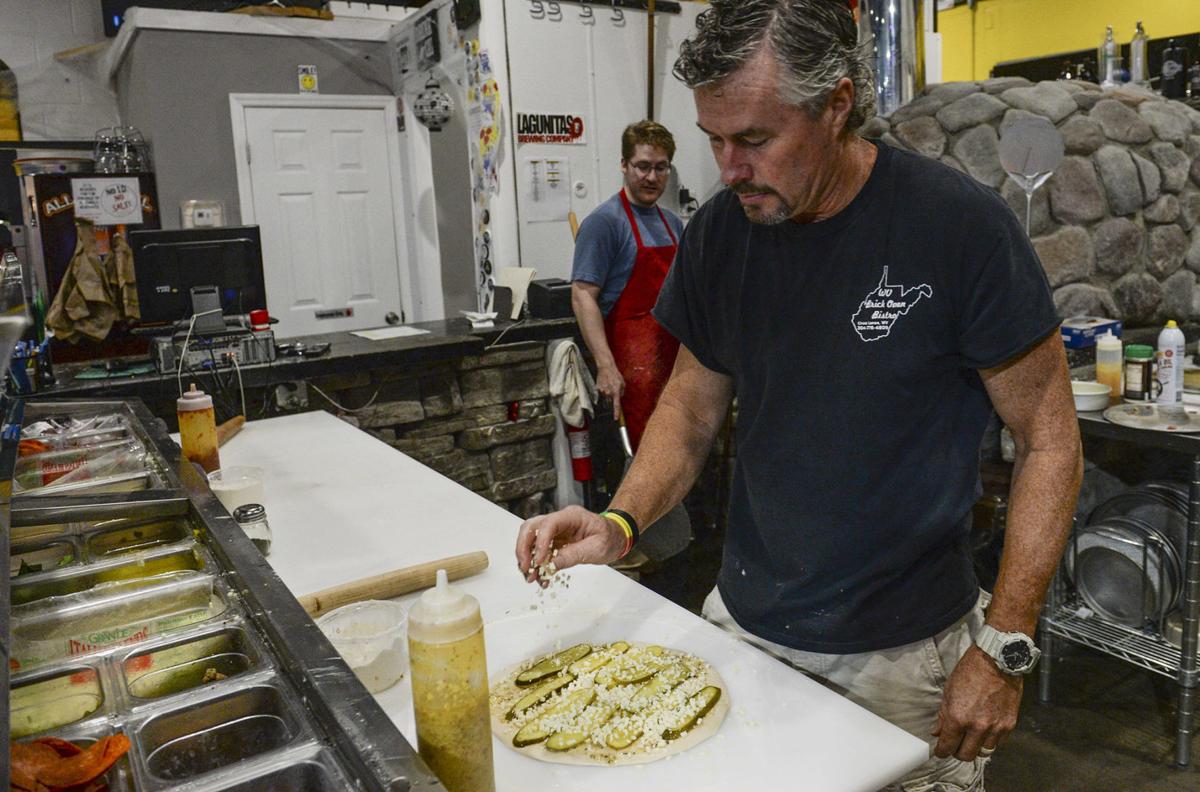 Ron Cole said the pickle pizza works because of layers of different flavors. 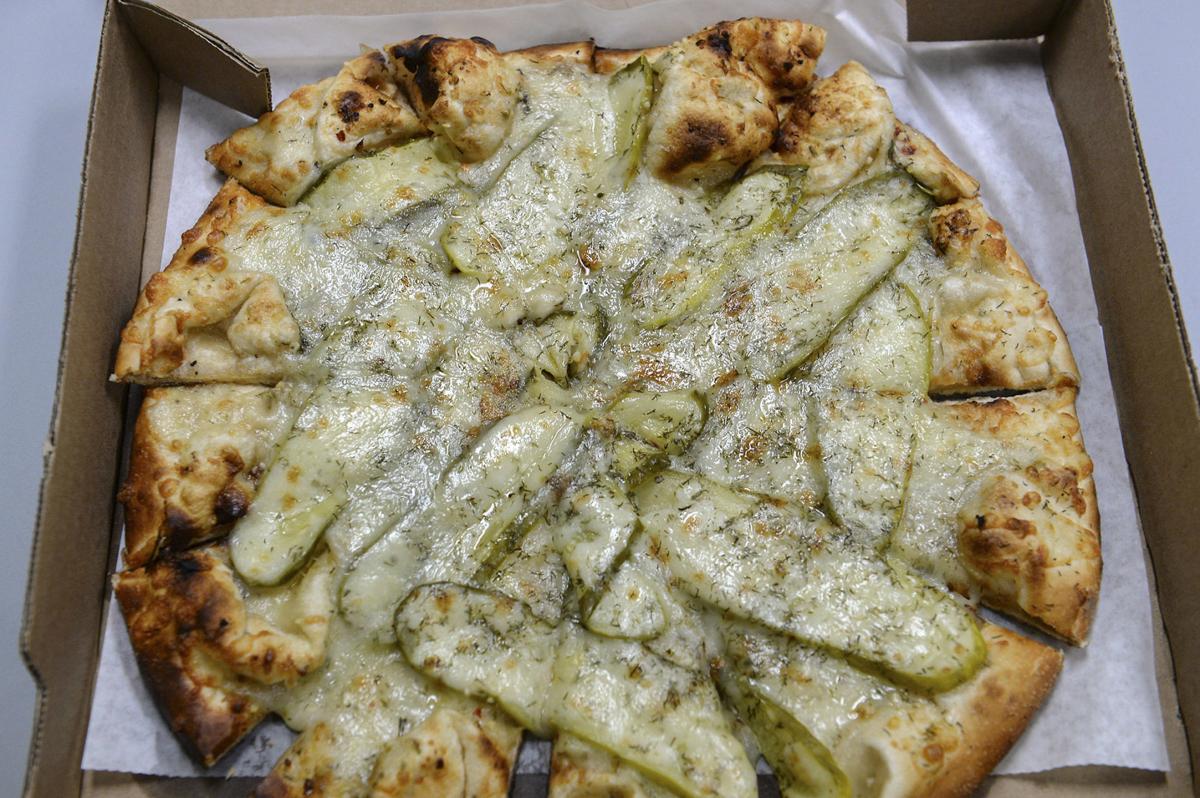 Don’t knock it until you try it, but pickle pizza could become your next favorite pizza.

WV Brick Oven Bistro owner Ron Cole said he got the idea for pickle pizza from an article on social media. He figured if it worked in New York, why not here?

The pickle pizza at WV Brick Oven Bistro in Cross Lanes begins with a layer of Parmesan Garlic sauce and then dill pickle stackers.

Ron Cole said the pickle pizza works because of layers of different flavors.

Don’t knock it until you try it, but pickle pizza could become your next favorite pizza.

Local musician Chet Lowther might have been the first person I know to say something about pickle pizza.

It was something he had at the WV Brick Oven Bistro in Cross Lanes.

Lowther often plays at the pizza parlor and meat market on the weekend.

It’s a modest, but well-lit place that seats about 50 people. Reggae flows unceasingly over the sound system, except on the weekends when Cole books acoustic performers like Lowther.

The walls are decorated in the pan-African colors of red, yellow and green, the flag of Ethiopia and the Rastafarians.

A couple of months ago, Cole said he introduced the pickle pizza on the menu after seeing something about it on a food website online, followed by a little trial and error.

“Honestly, I saw it on some social media site and they were doing the pizza with dill pickle chips,” he said.

But maybe crazy enough to work.

He experimented in the kitchen and came up with his own recipe using a homemade garlic Parmesan sauce, a blend of cheeses and dill stackers.

“Those are the pickles they slice longways and thin,” he said.

Stackers were specifically created to use on sandwiches, but they also cover the pizza well and Cole said he liked the flavor and decided to try it on his customers.

It wasn’t anything official. He didn’t even put the pickle pizza on the menu. It was just in the running to be added.

The bistro had been open for two years and Cole was looking at tweaking the menu, adding a few more specialty pizzas.

He told the waitstaff they could mention the pickle pizza to their customers.

“We told them if they wanted it, just to ask for it and we’d have it for them,” Cole said and laughed. “Then it went viral.”

People started sharing pictures and talking about it online, including Lowther who posted to Facebook a picture of a slice with a little bit of green peeking out from under a thick blanket of cheese, along with the description “tasty!”

I mentioned the pickle pizza to some of the folks in the newsroom. Reactions ranged from general disbelief (“You’re joking”) to disgust (“No way”), but a lot of people said they’d be willing to give it a try.

Even bad pizza gets better if it’s free and my editor okayed buying a single pickle pizza, if necessary, but my cubicle-mate, Jen Gardner, warned, “Don’t ruin pizza for me, Bill.”

It was hard to blame anyone for their doubts.

Pickles on pizza is, admittedly, a hard sell. You expect pickles either on top or on the side of a good sandwich. They’re supposed to be cold, not piping hot, though something can be said for fried dill pickles, which have gone from being bar and carnival food to a legitimate appetizer served at different restaurants.

At the bistro, Cole showed us how the pizza was made. Cooks roll out homemade dough, made with Italian Caputo flour, which may have a lower gluten content than other wheat flours.

Cole said suppliers have offered to sell him bags of pre-made dough which are a lot cheaper, but Cole said there was no real comparison to what they make in-house.

The flour isn’t the only difference. Cole said the bistro uses craft beer instead of the usual baker’s yeast to help the dough rise.

“Every pizza has three ounces of beer in it.”

The alcohol, he added, bakes out of the crust.

Different craft beers had different effects, though Cole said the bistro had a favorite, which he asked that we not mention.

Cole and his staff made three pickle pizzas for us, which went back to the Gazette-Mail newsroom to sample.

News editors Leann Ray and Cathy Caudill loved it. Leann was practically buoyant about pickles and pizza, while Cathy offered praise — and a couple of suggestions.

She wrote, “I love dill pickles, so I was excited to see the pickle pizza. I thought it was really good. I think they could have gone lighter on the cheese and the pickles could have been even more tangy and vinegary, but I’d definitely order this off the menu.”

He also went back for seconds.

I liked it, too, though I disagree with Jake about Hawaiian pizza.

The only vocal naysayer was graphics artist Kevin Cade, who said, flatly, “Pickles on my hamburgers, yes; pickles on my pizza, no.”

While the acclaim for pickle pizza wasn’t universal, it tested well with us, and I’m kind of interested to see what WV Brick Oven Bistro does next.