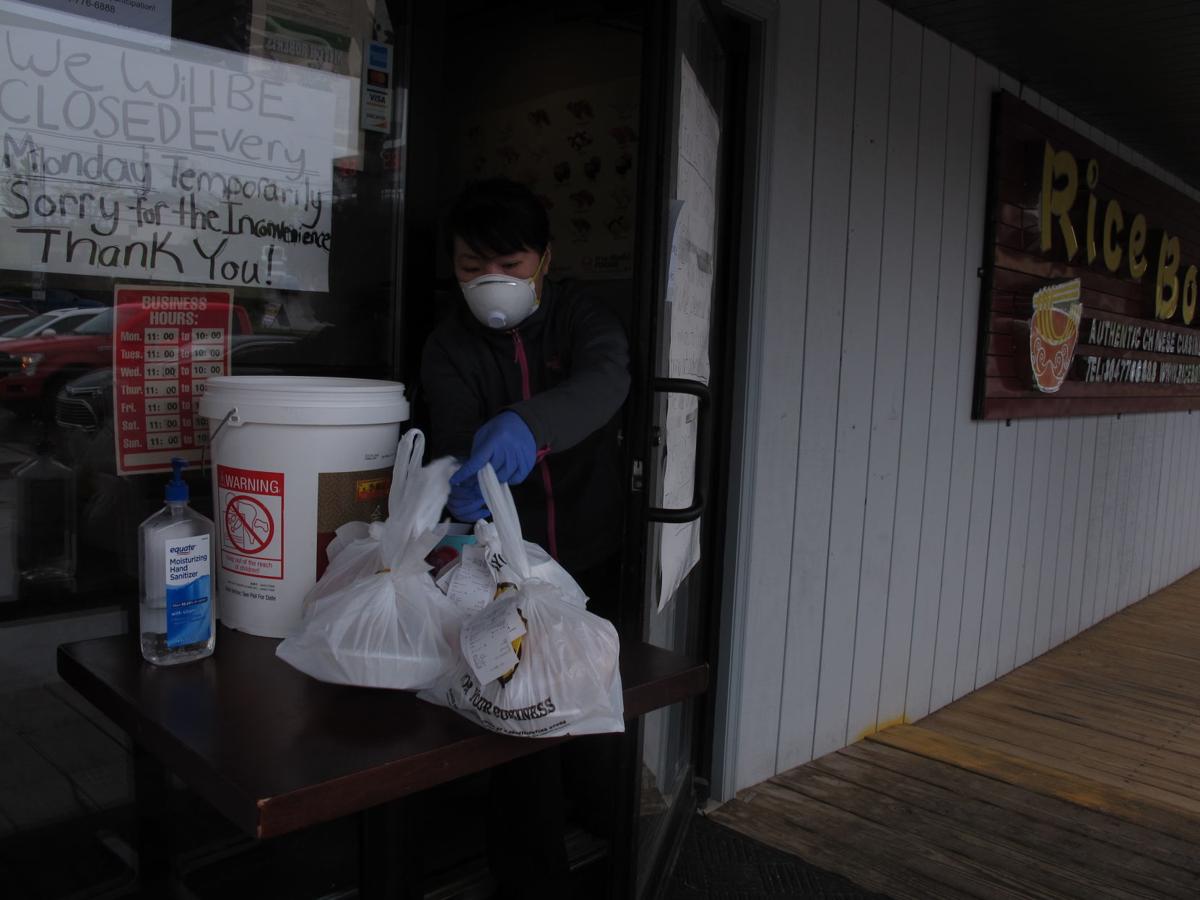 Fanny Gao places a to-go order out for pickup at Rice Bowl, in Cross Lanes. Rice Bowl is one of the only Chinese restaurants still open for business in the Kanawha Valley. 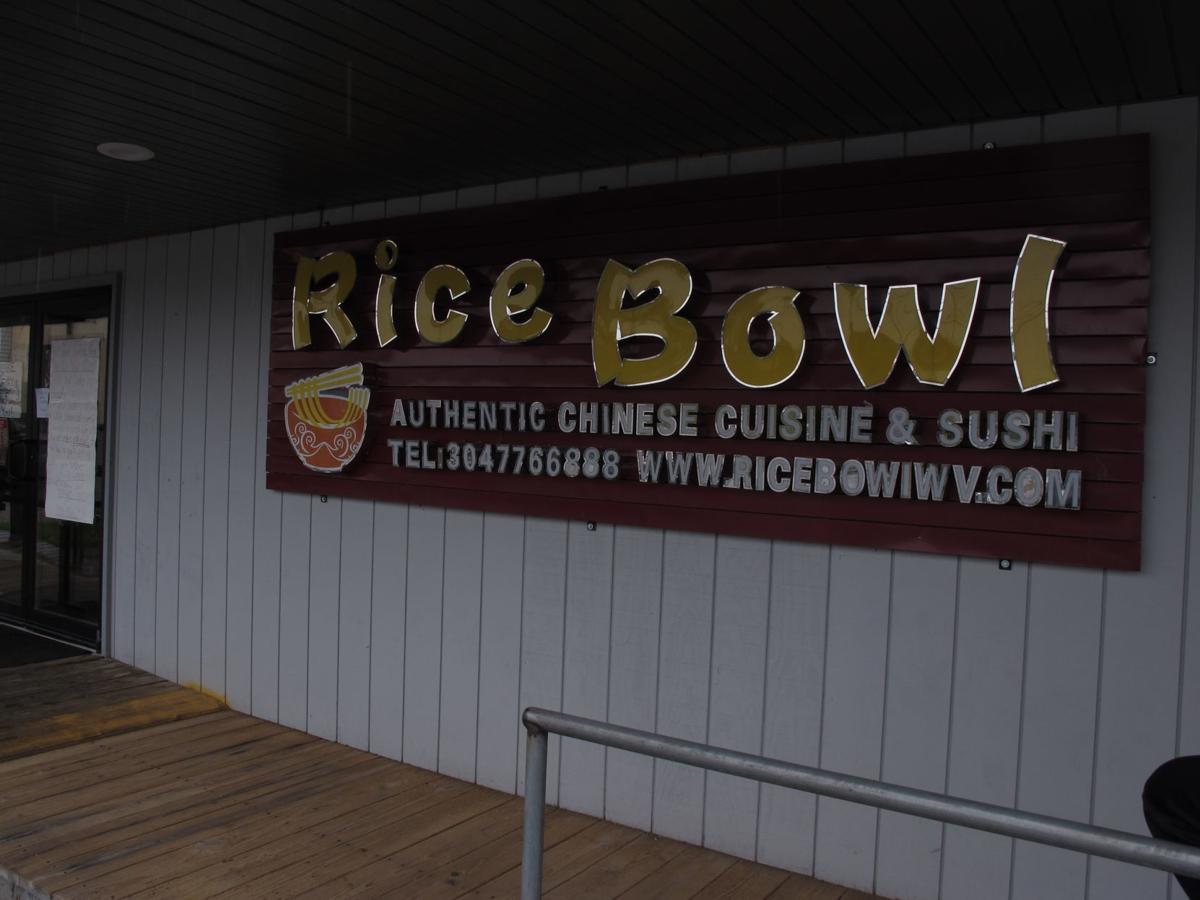 Located in Cross Lanes, Rice Bowl is one of the few Chinese restaurants still doing business during the coronavirus pandemic.

Fanny Gao places a to-go order out for pickup at Rice Bowl, in Cross Lanes. Rice Bowl is one of the only Chinese restaurants still open for business in the Kanawha Valley.

Located in Cross Lanes, Rice Bowl is one of the few Chinese restaurants still doing business during the coronavirus pandemic.

On a rainy Thursday afternoon, a handful of customers stood outside Rice Bowl, in Cross Lanes, waiting for their orders.

A local man — a restaurant regular, wearing a protective mask — groused about how long he’d been in line.

“I’m just going to give it a couple of minutes and then I’m going,” he said. “Somebody else can have my food.”

Others standing around for their food, all exercising social distancing guidelines, paid him no mind. The wait didn’t seem too bad to them.

“I’ve been here about five minutes,” Andrew Wyatt, a postal employee who drove from Sissonville, said. “I usually get food at Bamboo Garden in Sissonville.”

It was Wyatt’s first time at Rice Bowl. And after navigating predictably congested Cross Lanes lunchtime traffic, what was another five minutes?

Besides, Bamboo Garden closed weeks ago. Almost all the Chinese restaurants in the Kanawha Valley shut down after Gov. Jim Justice issued an executive order restricting food service to delivery and pickup in an effort to slow the spread of the coronavirus.

Except for Rice Bowl.

Over the phone, Rice Bowl owner Andy Gao said, “I know a lot of Chinese restaurants, when they shut down, [their employees] go back to their hometown or go back to New York, but we have nowhere to go.”

Gao moved to the United States from southern China in 1996 and has been a U.S. citizen for more than 10 years.

Gao said he thought most of the other Chinese restaurants closed down out of fear.

“They just have great fear of the corona-thing,” he said.

Gao was afraid, too — serving food is risky, but he said they work smart and cautious.

Orders are taken over the phone. Customers pay by credit or debit card. When they arrive at the restaurant, they call and let Gao know they’ve arrived. When the food is ready, Gao or his wife, Fanny, wearing a mask and gloves, exit the dining area through a door into the entryway. Then they unlock the outer door and open it just a little.

“We have a little table by the door outside,” he said. “My wife or me brings out the food and puts it on the table and we call out the name.”

Customers are asked to wait in their cars, but despite instructions written in big letters on a sign on the door, every now and again someone tries the handle.

The food comes out bundled up and tied shut in a plastic bag. Signed receipts and tips are dropped in a plastic bucket sitting on the table beside a bottle of hand sanitizer.

Contact between customers and restaurant workers is minimal to nonexistent. This is how Gao and his wife stay safe.

The speed of service bothers Gao a lot, he said.

“Usually, we can get customers through in five minutes,” he said. “This takes three or four times as long, but we’re comfortable with how this works.”

In another safety measure, Gao said he checks the temperature of his workers every morning when they come in.

“It’s the best deal around,” she said. “For about 10 bucks, you get the buffet and a drink, and the food is excellent.”

Peterson said she understood the precautions, but didn’t feel they were necessary.

“We don’t have the kind of population that New York or Los Angeles has,” she said. “We don’t have subways or people on top of each other like they do there. It’s just not going to get that bad here.”

Gao said Rice Bowl has always been a neighborhood place that has relied on friends and neighbors.

Jason Miller, waiting to pick up an order of beef lo mein, orange chicken and shrimp with garlic sauce, said he didn’t mind the extra precautions.

“I went to school with Andy at [West Virginia] State,” he said. “The food is really good. Andy and his family are great people.”

Because Rice Bowl is one of the only Chinese restaurants in the area still operating, Gao said his customer base has expanded. To keep up with the demand, he said he’s pulled in his whole family to help.

“I’ve got my parents helping me out. I have my kids working with us,” he said and laughed. “My 11-year-old son has been helping.”

To give everyone a bit of a rest, the restaurant has been staying closed on Mondays. Gao said they hoped to eventually get back to regular hours.

Things are busier, but not much else has changed. Their top-seller is still General Tso’s chicken, a Chinese restaurant staple. They sell a lot of crab Rangoon, and Gao said the sweet hush puppies with honey butter are popular.

Gao said he is glad to be feeding people — people need to eat, and food is a comfort.

“It’s a really hard time for everybody,” he said. “We just want to do our part, help our country, help our community.”