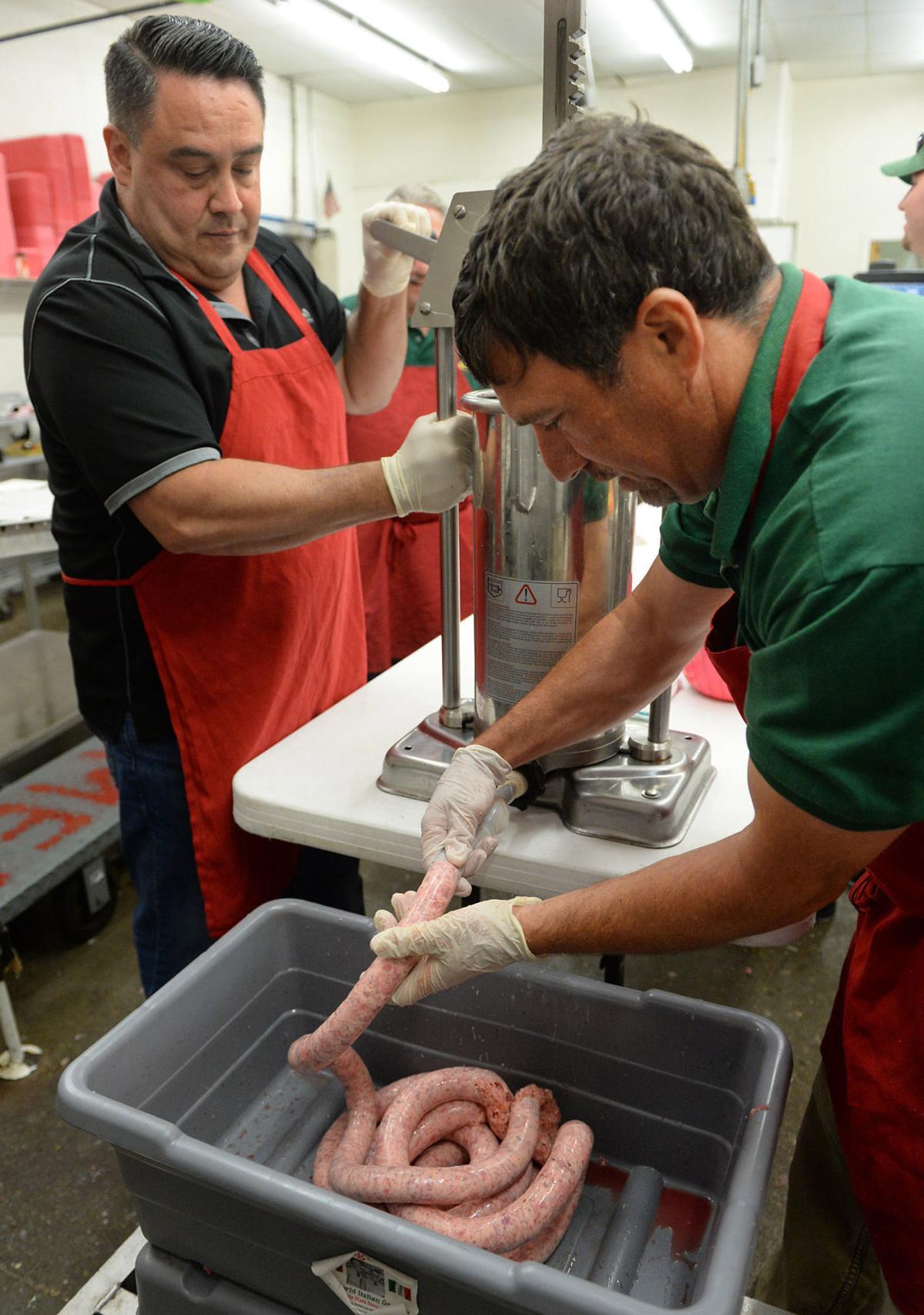 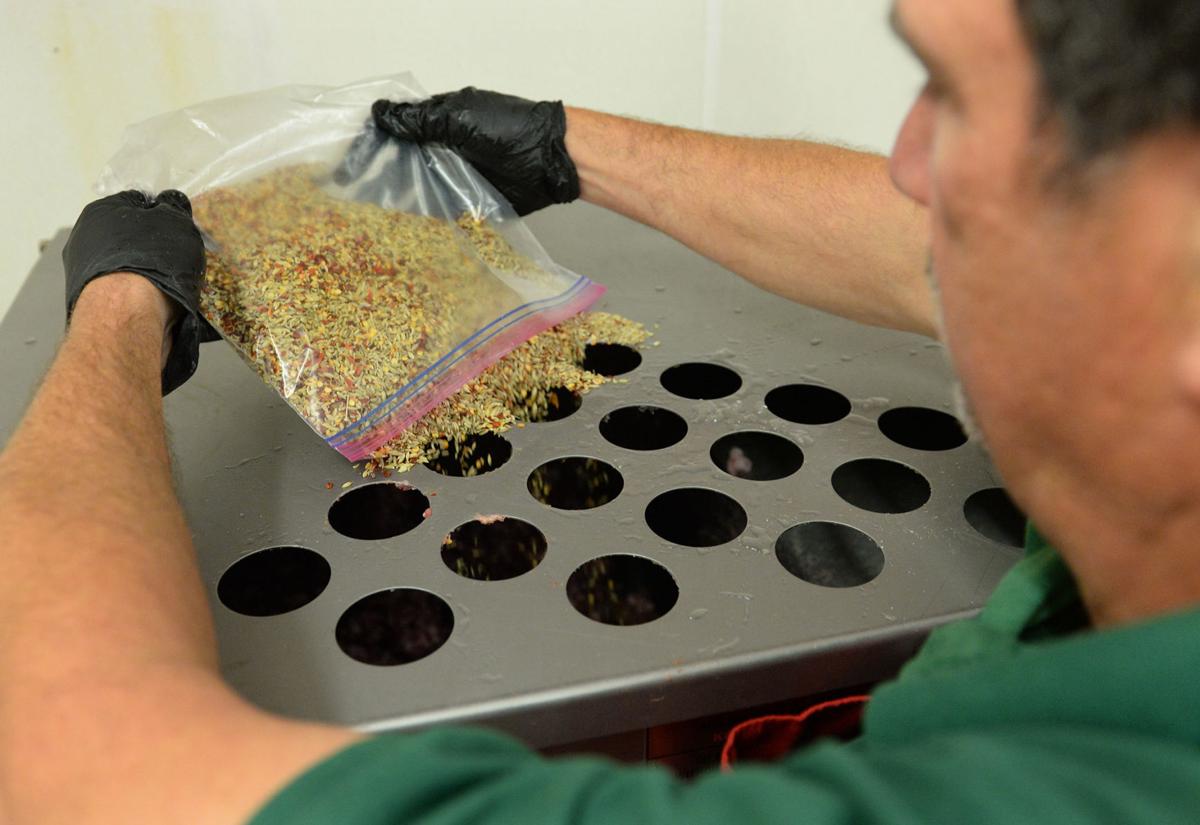 Louis Argento shakes a fennel-based spice mix from a bag into the meat grinder. 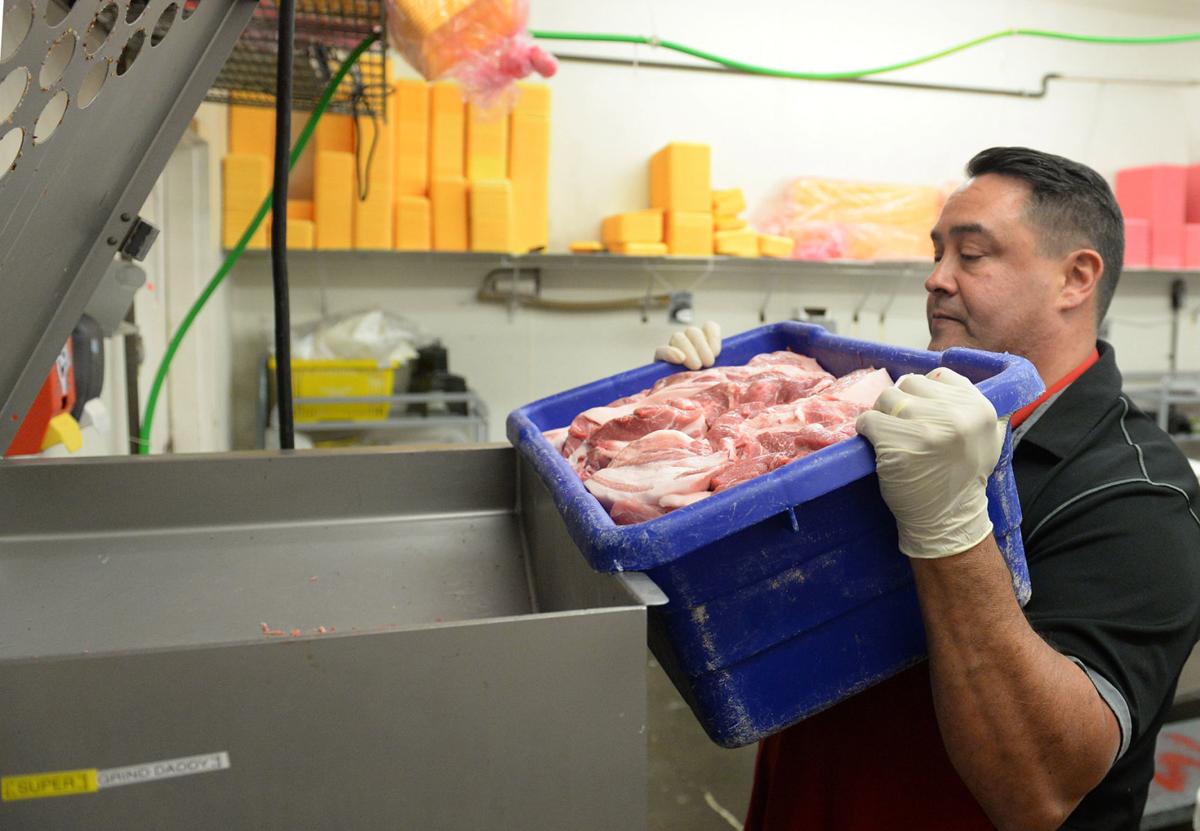 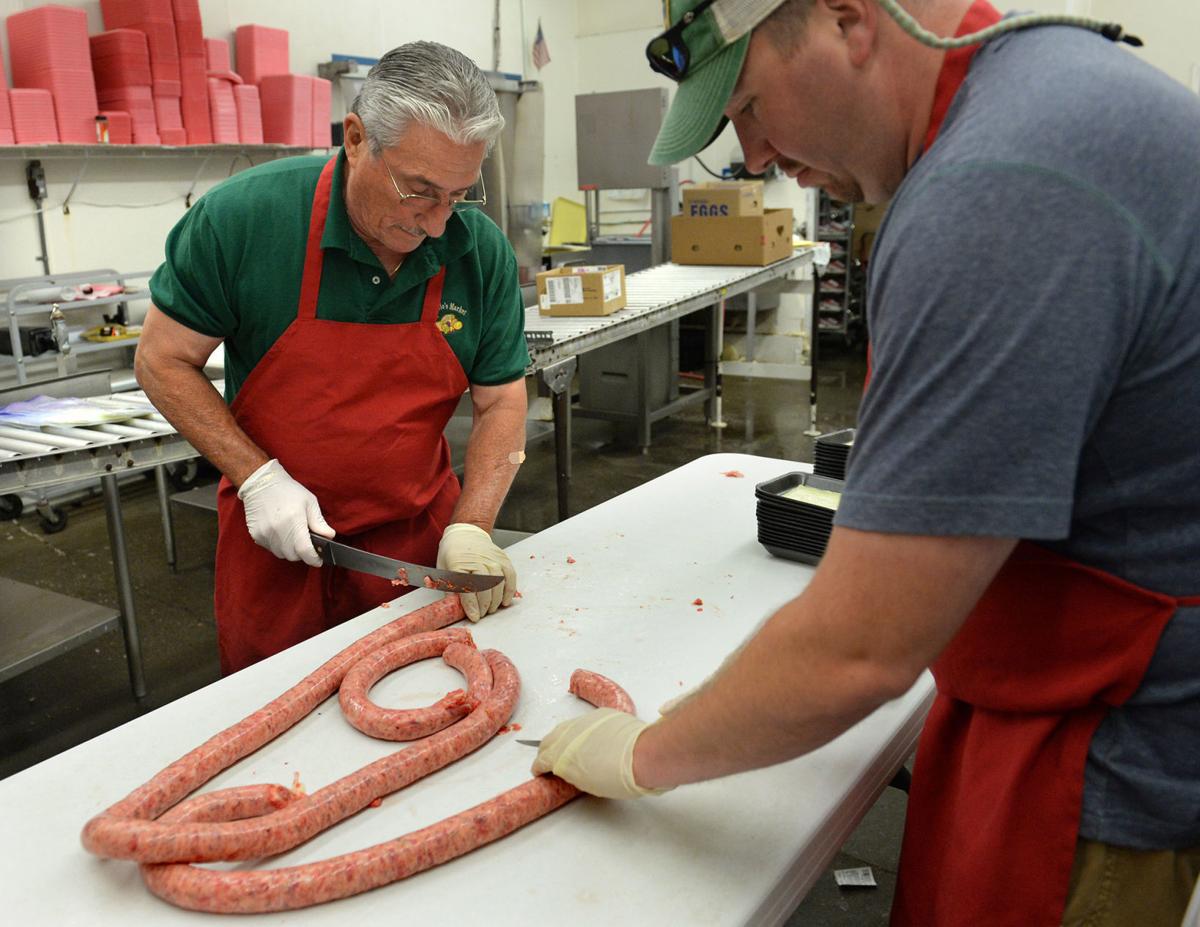 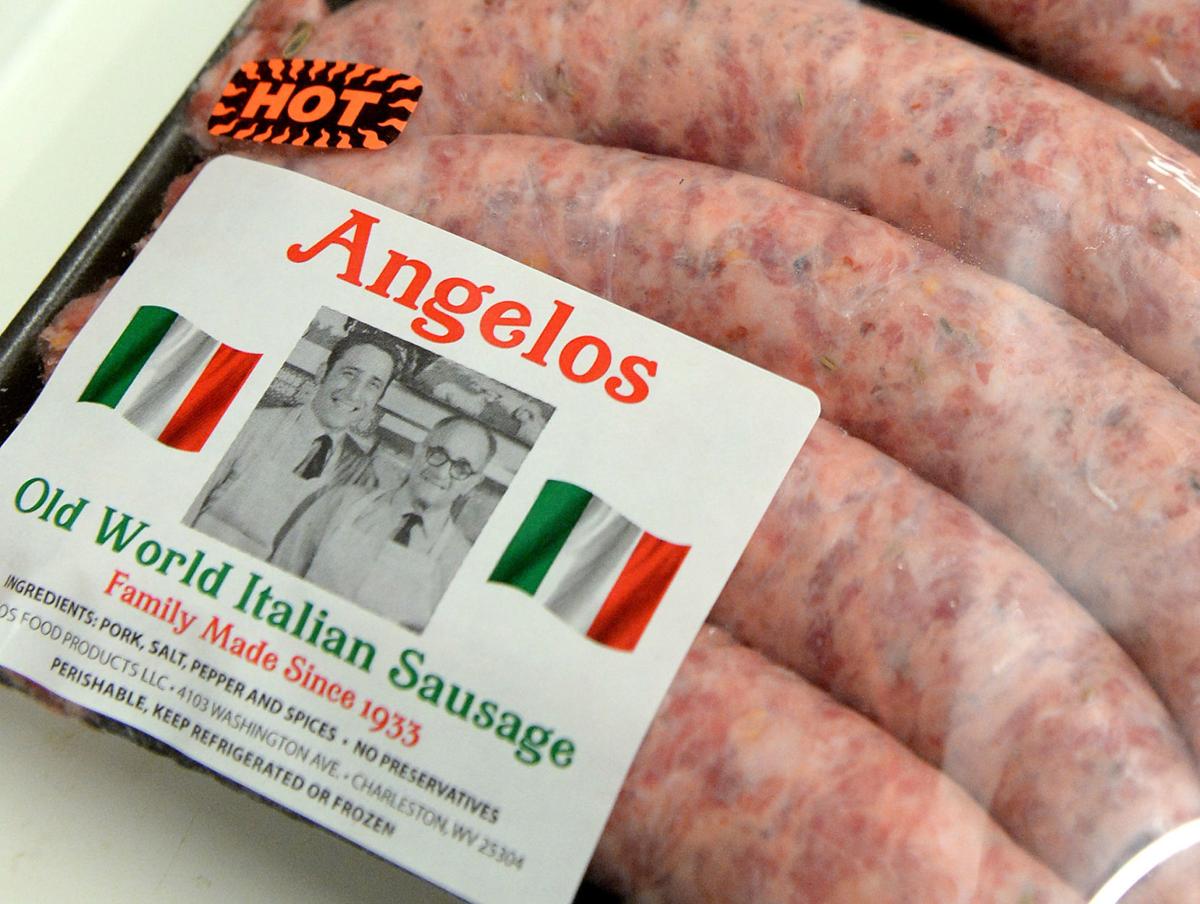 Angelo Argento, also known as “Sonny,” and his father, Angelo, are pictured on the packaging for Angelos Old World Italian Sausage. 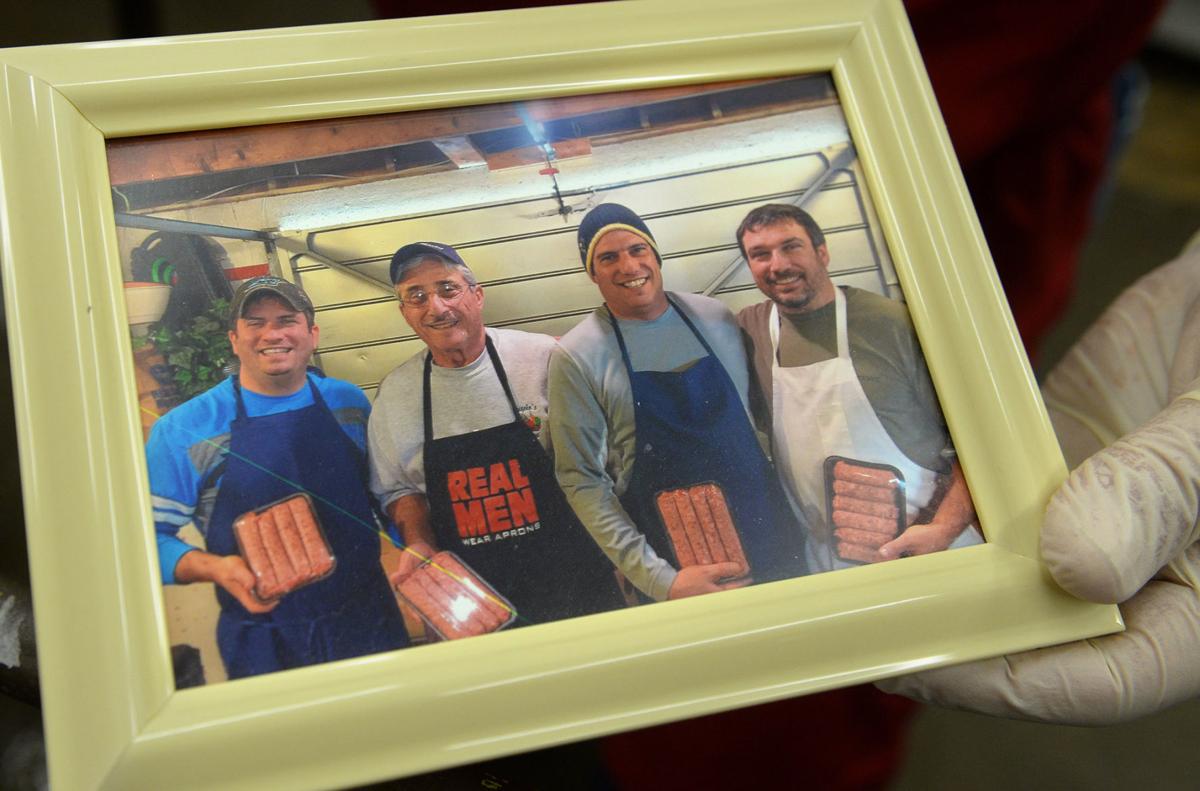 Angelo Argento, second from left, and his three sons.

Louis Argento shakes a fennel-based spice mix from a bag into the meat grinder.

Angelo Argento, also known as “Sonny,” and his father, Angelo, are pictured on the packaging for Angelos Old World Italian Sausage.

Angelo Argento, second from left, and his three sons.

Even after all this time, Angelo “Sonny” Argento still isn’t sure his son Louis has quite mastered his family’s Italian sausage recipe.

“Every now and then, he’ll say ‘Do you think that is enough salt, dad?’” Sonny said. He looked across the Kanawha City Piggly Wiggly meat kitchen, where the family makes and sells its “Old World” sausage, and grinned at his son as he worked a meat grinder.

“Are you telling lies over there, dad?” Louis said, looking up.

With the help of two friends, Angelo and Louis meet about twice a month to fill orders and create stock for their sausage business, “Angelos Old World Italian Sausage.” In addition to being sold in the store, the sausage is also featured on the pizza at Lola’s, in a dish at Bridge Road Bistro and occasionally at Swiftwater Cafe.

When it comes to the recipe, the Argento family takes the phrase “Old World” to heart.

“Our goal is to make it just like Ninnie and Papa made it,” Louis said, before describing his grandmother’s recipe.

The sausage is made with pork shoulder meat, natural casings and a fennel-based spice mix.

“And the bite,” Louis said. “When you bite into our sausage, it’s a meaty bite, unlike a lot of our competition, where it’s kind of mushy.”

The sausage was once a specialty and favorite of customers at the Fayette County general store once owned by the first Angelo Argento. He was Sonny’s father and Louis’ grandfather. And the family is pretty sure that somewhere, Angelo is tickled pink to know that the long-time family business is up and running once again.

Angelo Argento was a coal miner and the son of an Italian immigrant who came to work in the Fayette County coalfields.

His father, Liborio, sailed from Sicily to New York Harbor in 1907, leaving behind a wife and his young son, Angelo, until he could earn enough to bring them to America.

After working briefly at a carrot farm in upstate New York and underground four years in West Virginia’s booming coal industry, he earned enough to bring his family to Montgomery.

At the time, more than 17,000 Italian immigrants had made their way to West Virginia.

Also among them was Giovanni Lopez, who left behind a pregnant wife, Carmelo, in Naples to work on the Union Pacific Railroad. He, too, made his way to West Virginia coal mines, and brought his family to America after more than six years.

Within a year in West Virginia, Carmelo gave birth to a second child, Serafina, also known as “Sarah,” who would one day marry Angelo and become Sonny’s mother.

Despite culture shock and harsh working conditions in the mines, the families maintained close ties to their Italian heritage through language and good food.

Giovanni opened a school to teach children of the Italian immigrants how to speak and properly write Italian. It was furnished by the coal company.

Most of the families learned enough broken English to be able to communicate in the mines and within the community. Except Liborio. He never learned to read or write English, and never became an American citizen. He figured he wouldn’t live long enough to make it worthwhile – though he lived well into his 90s.

Like many young boys at the time, Angelo dropped out of school in fourth grade and went to work in the mines at 13 years of age.

Treacherous work already, the conditions were even more dangerous for the young men, who were given the most hazardous jobs.

Eventually, Angelo picked up a part-time job at a store in Boomer. After 13 years, he quit his job in the mines due to the harsh working conditions and realized how much he enjoyed retail.

Angelo opened A. Argento & Company General Merchandise in Powellton Hollow, Fayette County, in 1932, smack in the middle of the Great Depression. The shop later became known as “Angelo’s Market.”

On top of the brutal economy, Angelo was in competition with two local company stores, which paid their employees in the company money known as scrip. To compete, he took orders door to door and offered delivery. He accepted scrip dollar for dollar and traded it in for cash at the company stores. It was a recipe for success.

In 1935, Angelo married Sarah, who was known to work just as hard as her husband to make the family business thrive, while raising five children.

“In the doorway, they put two eye hooks, hung a swing and tied me in it,” Sonny said. “She had to go help dad in the store. They were hardworking people.”

Sonny grew up in the store and eventually purchased the shop from his father. He raised his own three sons and two daughters to have the same work ethic.

“I remember them giving me a knife and just some random piece of meat for me to sit there and cut up to make me feel like I was doing something,” Louis said, laughing. “I was maybe 8- or 9-years-old.”

Saturday mornings as a teenager meant getting up early to help out at the store, making hot sandwiches and helping out in the butcher’s shop.

Angelo’s traditional Italian foods and Sarah’s recipes were an attractive combination to their community.

“The sausage was a big part of it because the company stores didn’t have the sausage,” Louis said.

Rather than using a commercial meat grinder and mixer like they do today, the shop would grind it by hand and lay it out on a butchers block to add the spices before stuffing it with a hand-cranked gadget attached to the butcher’s block.

“My grandmother was like the official taster,” Louis said. “She’d go, ‘It needs more salt, needs more fennel.’ She was the perfection on the recipe.”

Customers would drive from Beckley, Oak Hill and Charleston for a package of Angelo’s sausage. During the holidays, the store would roll out 30-, 40- and 50-pound special orders.

They also kept enough for themselves.

When Louis was young, the family ate the sausage often at Sunday dinners.

Rather than pre-cut sausage links, the meat was baked in a coil and set in the middle of the table for each family member to cut off as they liked.

“After dinner, when Papa was taking his nap, Ninnie would take all of us kids over to the store to get tiny little paper bags and get us our candy,” Louis said, laughing. “She’d let us fill up our bags and oh, what a treat that was. Papa never knew.”

Angelo’s Market was handed down to Sonny and then to his son, John, and eventually closed in 2009 after more than 77 years in business.

Eighteen months ago, it came back.

Father and son, Sonny and Louis, began making and selling the sausage at Piggly Wiggly in October 2016, right after Louis quit his 20-year day job in banking.

“For different reasons, I was just burned out, hit a wall, whatever you want to say, and this sausage business is something dad and I had always talked about,” Louis said. “To me, it was just a natural kind of progression. It’s something I believe in, it’s all about my family who I love dearly and appreciate.”

In a way, such a dramatic change came naturally. It was his grandfather, after all, who first left his own job to open the shop.

“I kind of see myself in the same light as him, but not nearly as dramatic,” Louis said. “I walked away from a really good-paying job, taking a risk here with this family business.”

Once the store closed in 2008, the immediate family and a mix of other relatives would gather about once a year to make sausage around the holidays.

It was no surprise when customers would ask to special order some for their own celebrations.

The family made the gathering into a tradition. Then Louis made it into a business once again.

“You know what they say, ‘if you like what you do, you never work a day in your life,’” Louis said. “It’s kind of one of those things.”

The stories behind his family’s journey to America and the store they started here are what make working in the sausage business so easy for him.

People love to know the story behind their food, he said.

The father and son are currently in the works with local distributors to make the sausage more widely available. Though the shop is long gone, making the sausage has become a family legacy.

“Without him, I wouldn’t have even considered it,” Sonny said, looking across the room as Louis operated the sausage stuffer. “I’m just glad he has the tradition in him.”