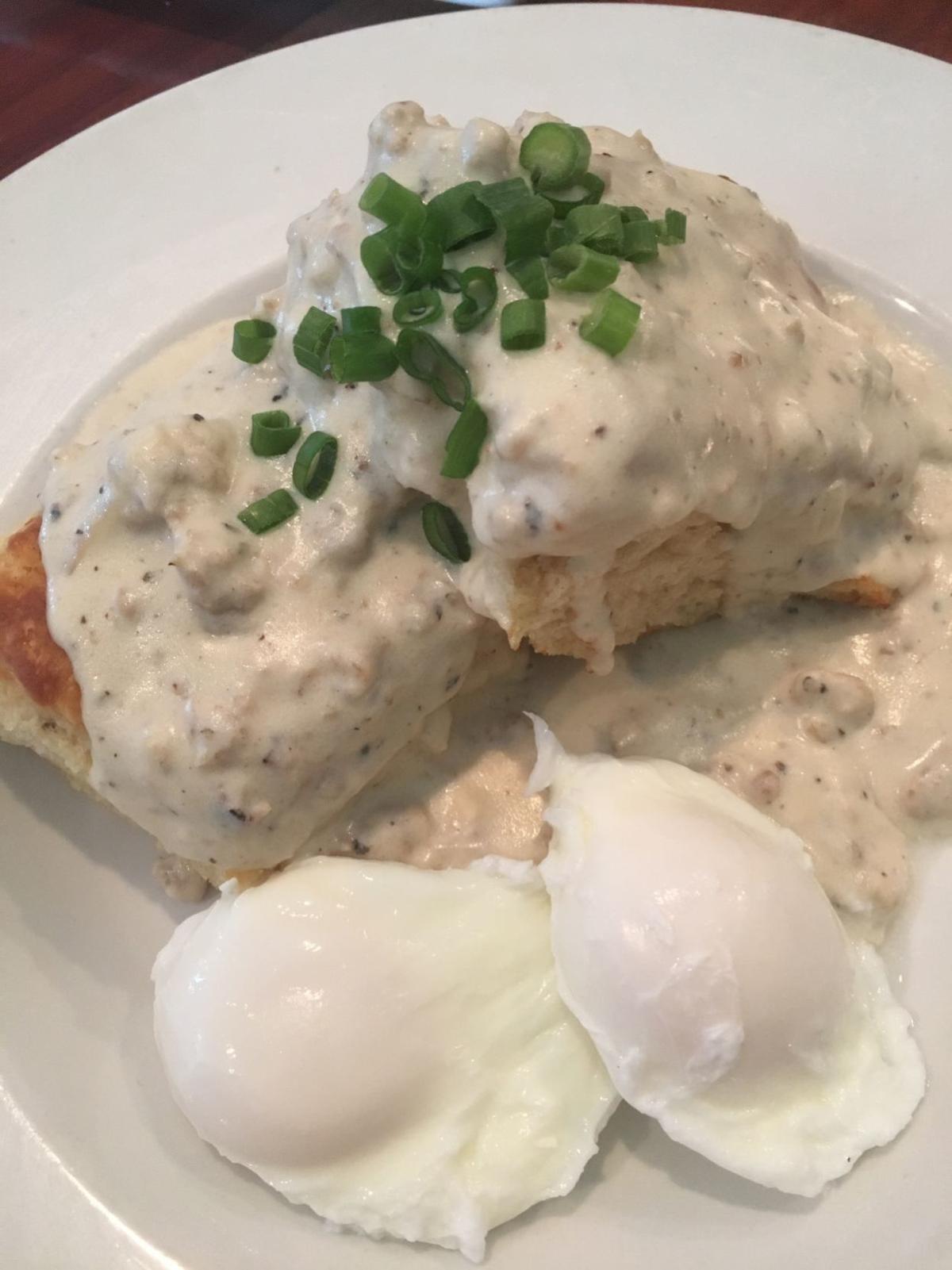 Bridge Road Bistro’s buttermilk biscuits and sausage gravy with eggs, the only permanent item on their new weekend brunch menu. 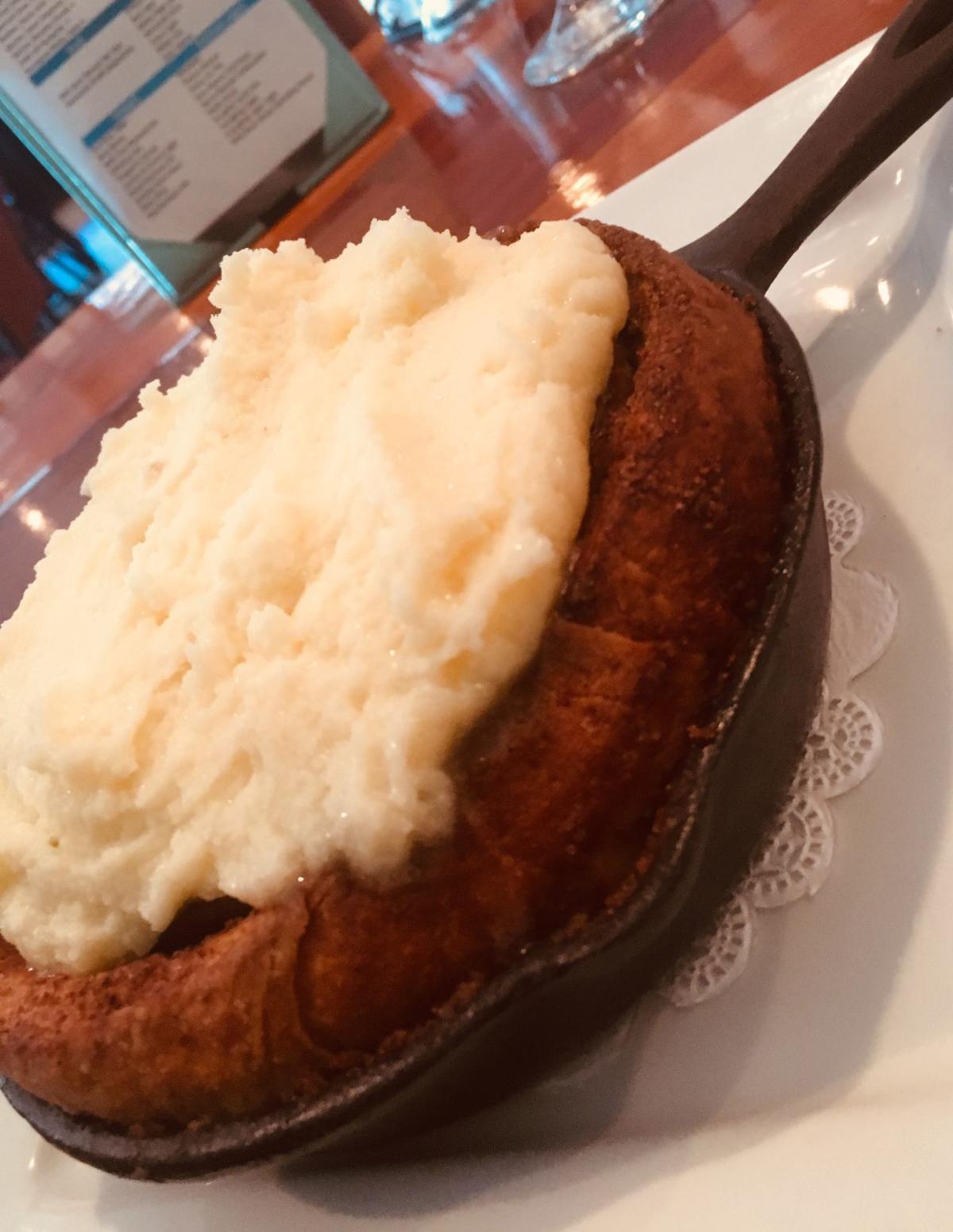 The only thing The Food Guy didn’t like on this cast iron cinnamon roll? Too much thick frosting. 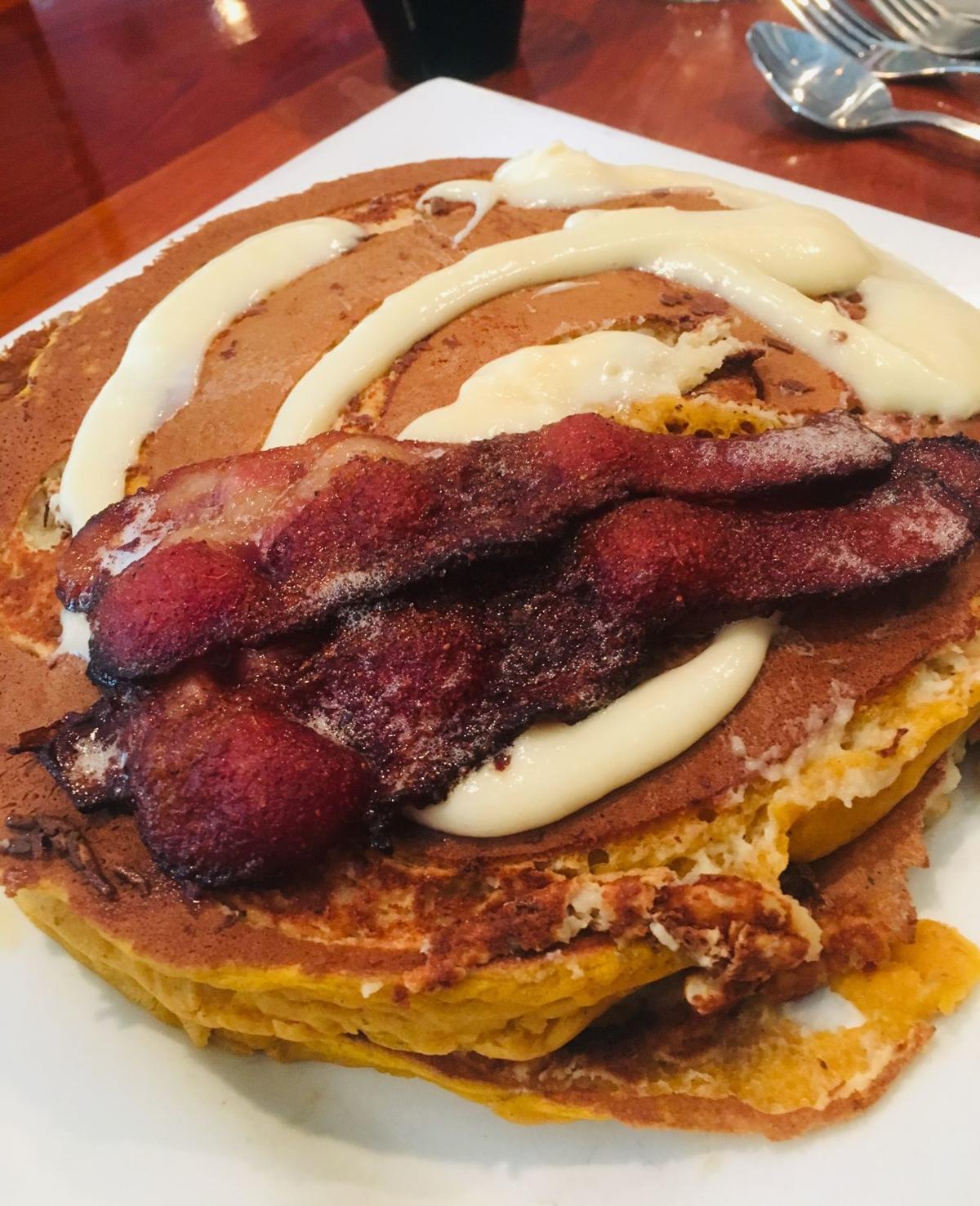 Bridge Road Bistro’s buttermilk biscuits and sausage gravy with eggs, the only permanent item on their new weekend brunch menu.

The only thing The Food Guy didn’t like on this cast iron cinnamon roll? Too much thick frosting.

Last week, I sang the praises of Bridge Café & Bistro in Hurricane.

This week, I’m sharing the love for the similarly named Bridge Road Bistro in South Hills — specifically for the restaurant’s new Saturday brunch menu and hours.

A few days ago I was surprised to learn the restaurant had started opening early on Saturdays last month, and even more pleased when I heard the brunch menu changes every week.

I wasted no time popping in this weekend to find options like buttermilk biscuits and sausage gravy with eggs, pumpkin cheesecake pancakes with pumpkin-spiced bacon, and a fried chicken biscuit with egg, cheese and honey butter.

Most brunch entrées include one bloody Mary, mimosa or draft beer in the price.

Regarding those healthy crepes and lettuce wraps, our waitress told us those attending Zenergy spin classes next door on Saturday mornings will always find a protein-packed option on the menu.

That’s nice dear, I said, then proceeded to order the exact opposite.

No guilt here, because Chef John Wright’s sausage gravy was textbook and the pillowy biscuits it coated were so light and fluffy they were almost cake-like in texture. They told me this is the only dish that’s constant on the menu each week, and I can absolutely see why. It also comes with two eggs your way, and my poached ones were pretty but fell a little short by being cooked a minute or two over, making the yolks inside partially hardened.

My 12-year-old got all googly-eyed over the pumpkin cheesecake pancakes, partly due to their satisfyingly sweet taste but mostly because of their ginormous size. These were quite possibly the largest and thickest flapjacks I’ve ever seen.

We also dug into the cast-iron cinnamon roll, which is every bit as splurge-worthy as it sounds, although we would’ve preferred a topping that was a little more glaze and a little less icing, because it was so thick and rich.

All in all, though, it was a great mid-morning meal, an awesome soundtrack of laid-back music added a festive feel and service was fantastic. We’ll definitely be going back to try new creations in the coming months.

You Putnam County foodies really know how to step up!

When I issued a call asking for some new restaurants to check out in the greater Teays Valley area, many of you responded with some tasty tips.

“I APPROVE THIS POST,” wrote Kelli Daily, probably not surprising since she works for the visitors bureau charged with promoting great things to see, do and eat throughout Putnam County. “I’m glad to hear you loved the pulled pork sweet potato pancakes (at Bridge Café) because that is one of my favorite things on the menu.”

She went on to suggest a few others spots.

“Suka Ramen (in the same plaza as Mountain Pie and Whiskey Taco) is a great little new ramen spot. Taste of Asia in Liberty Square offers specials and right now the bulgogi and szechuan dumplings are so, so good. And there are a couple of promising new places opening soon that I’ll be sure to tell you about once things are up and running.”

I hear one of those is a new Drip Café coffee shop going in where Books and Brews closed.

Reader William Watkins cast his vote for a few of the same places Kelli mentioned, plus gave me a tip the next time I visit Bridge Café.

“Try the Hurricane Hash. It’s like an upscale version of a Big Tator from Tudor’s.”

More intriguing, however, was a little comment William threw in about a place called L&R Catering having “the best BBQ in the valley.”

Before I even had time to Google that place, another reader filled me in.

“Solid write-up on Bridge Café & Bistro,” Corey Preece said. “That place WAS a well-kept secret in the valley, but not anymore! All jokes aside, there are two incredible BBQ places you have to try.”

“Of course, Mountain Que gets a lot of love and for good reason. Their Porky Pie meal is one of the best BBQ-oriented dishes I’ve ever devoured. It’s served in a parfait glass and layered with hyper-cheesy mac ‘n’ cheese and pulled pork lathered in their homemade sauce.”

But, he added, the other BBQ spot in the valley may very well be the biggest secret from Cabell to Kanawha — and that’s L&R Catering located just past Hurricane High School.

“These guys are smoking meats. Every. Single. Day,” he told me. “They have incredible smoked wings and quite possibly make the best smoked West Virginia Hot Dog you’ve ever had. Their meat options are fantastic: brisket, chicken, pork, it’s all on point.”

He also raved about the creamy and smooth coleslaw and the potato salad with big chunks of boiled potatoes and pickles.

“I could go on and on,” Corey said. “In an era of dining in the Kanawha Valley that surprisingly boasts a lot of quality BBQ joints, L&R takes the cake and does a little dance.”

“I should also mention that Whiskey Taco just rolled out a new menu,” he added. “Try the Korean Wanton Nachos, I’ve been told it’s the best appetizer in the valley.”

Steven Keith writes a weekly food column for the Charleston Gazette-Mail. He can be reached at 304-380-6096 or by email at wvfoodguy@aol.com.