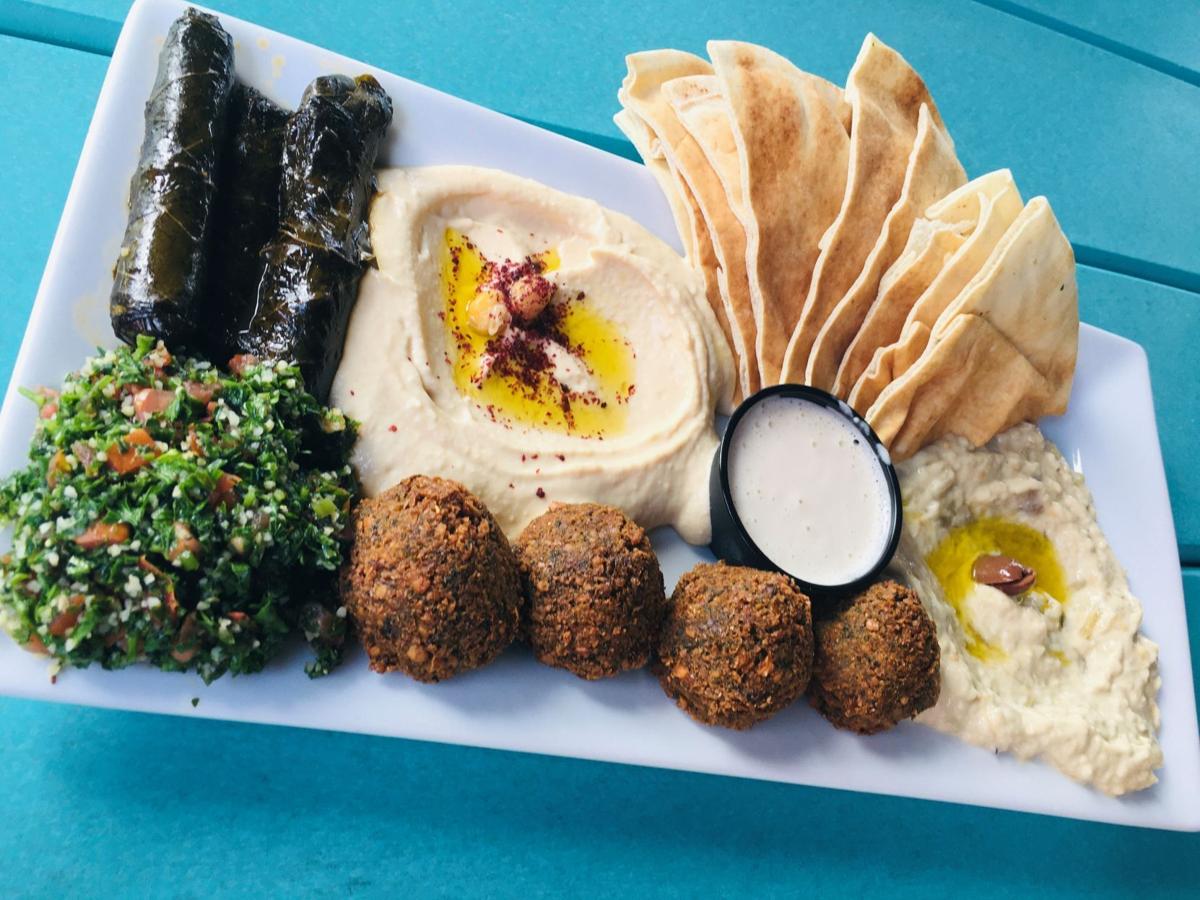 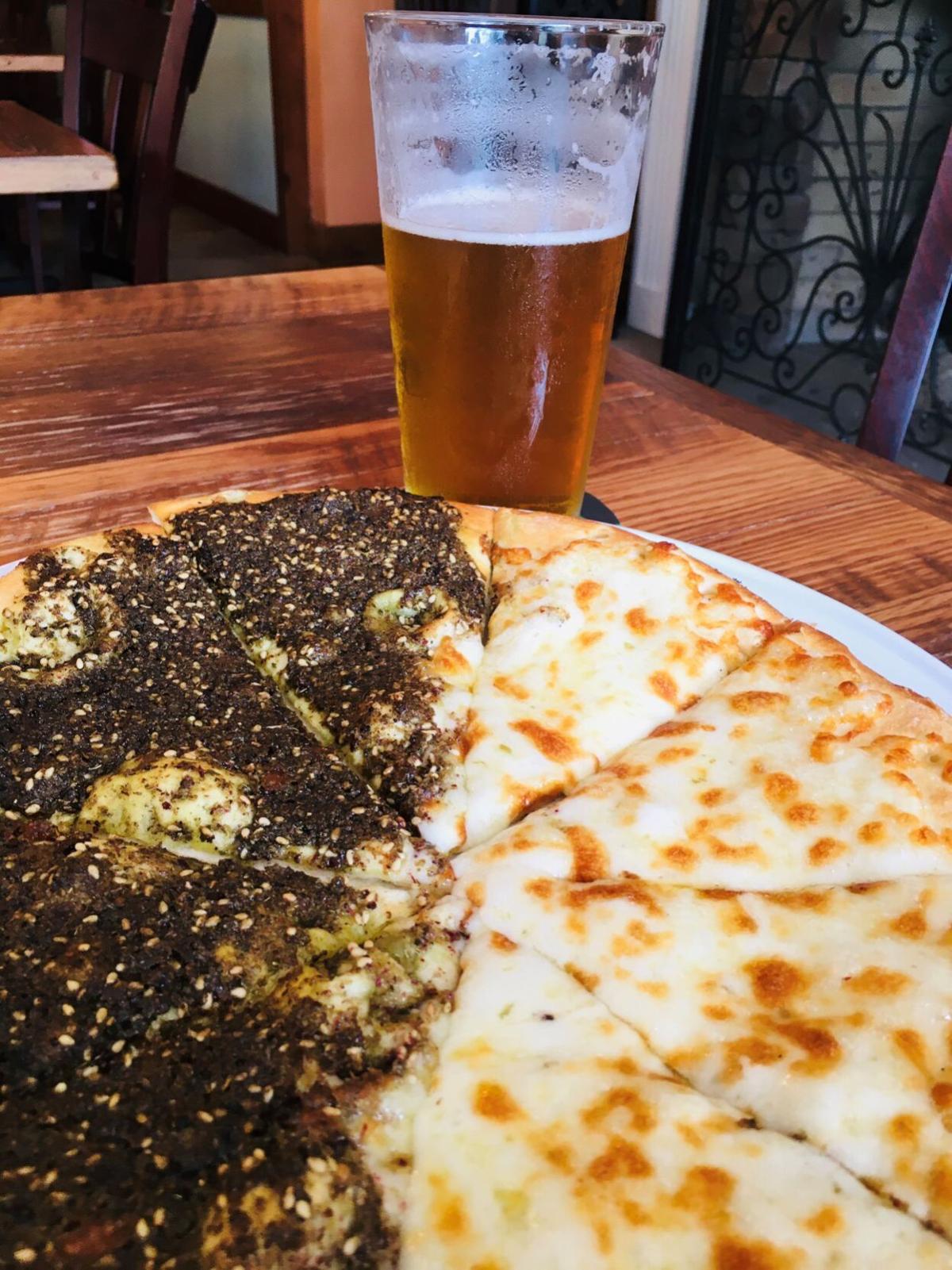 The Cheese and Herb Pie at Mediterranean Breeze. 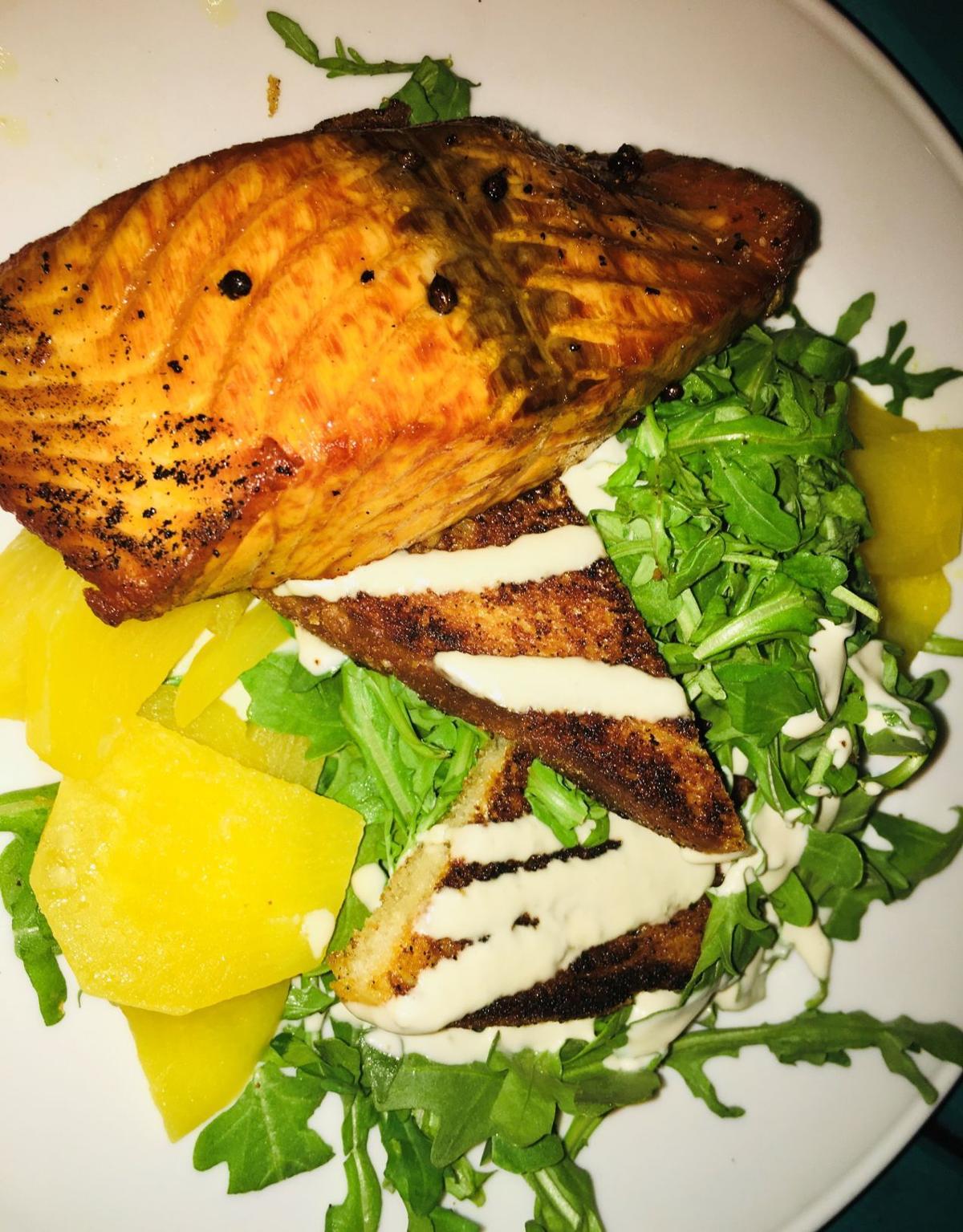 The Greek Salmon at Mediterranean Breeze. 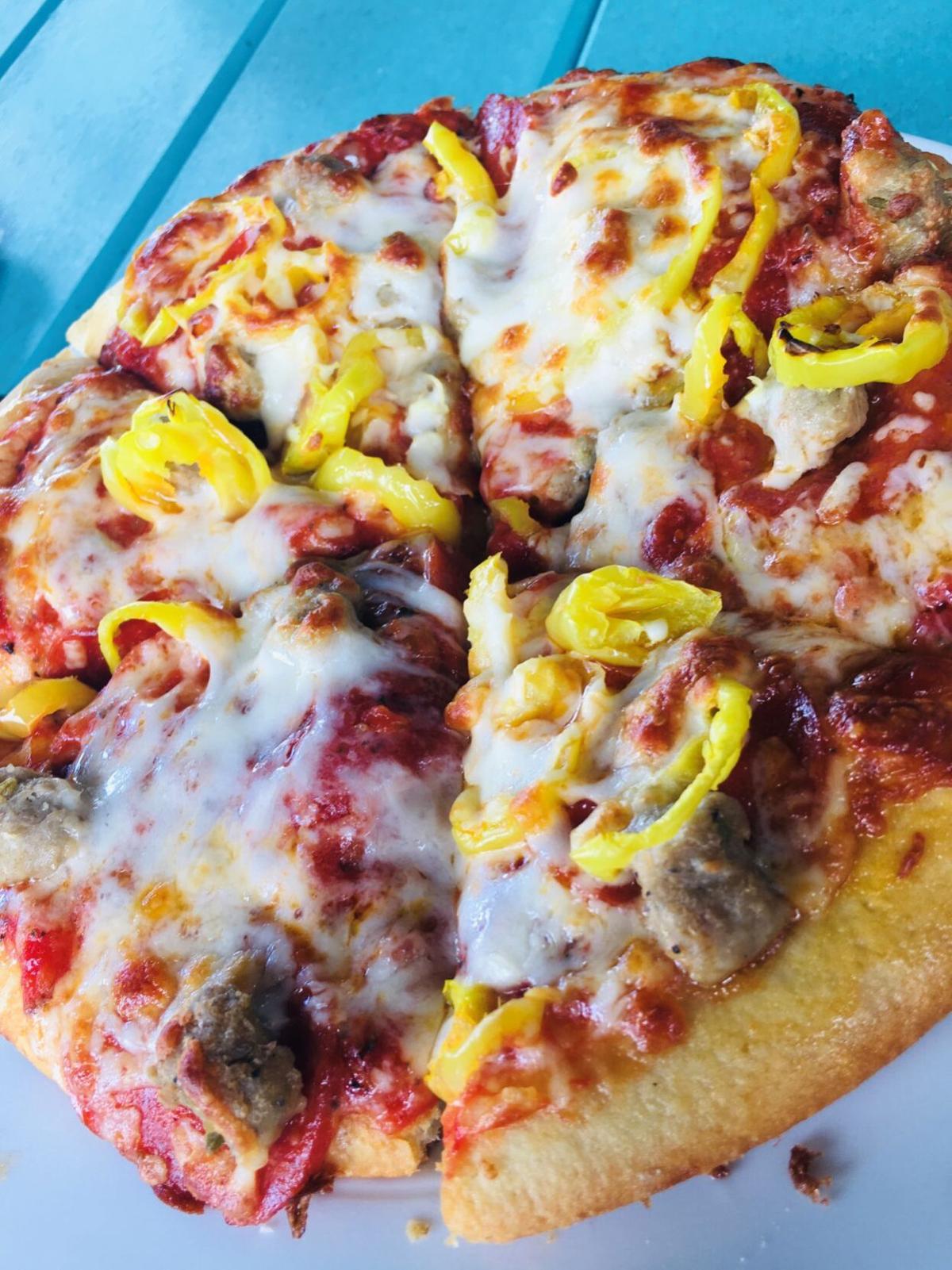 The sausage, pepperoni and pepper pizza at Mediterranean Breeze. 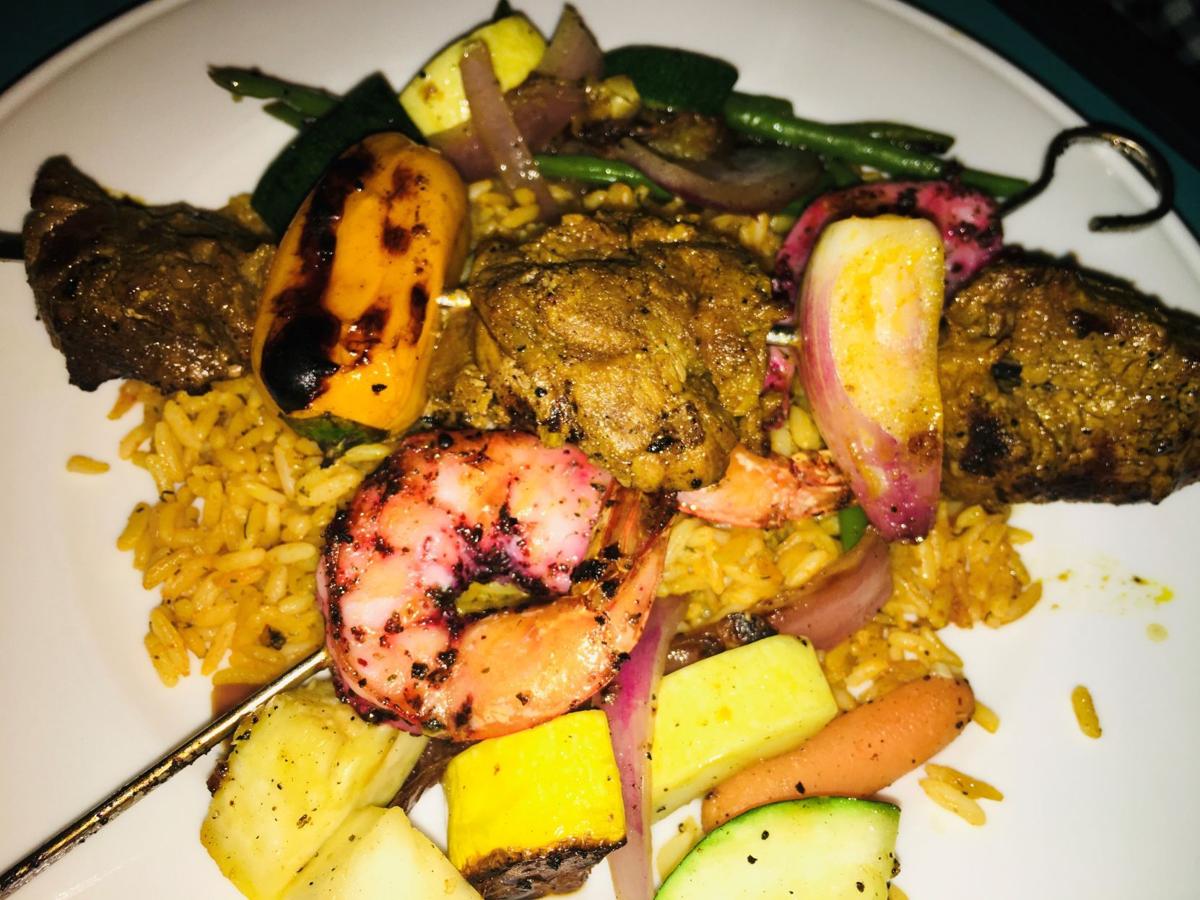 The Surf and Turf Kebab at Mediterranean Breeze.

The Cheese and Herb Pie at Mediterranean Breeze.

The Greek Salmon at Mediterranean Breeze.

The sausage, pepperoni and pepper pizza at Mediterranean Breeze.

The Surf and Turf Kebab at Mediterranean Breeze.

When I heard a new restaurant offering riverfront dining had opened in St. Albans earlier this year, I couldn’t wait to try it out.

For an area full of cities and towns built alongside rivers, the Kanawha Valley has surprisingly few places where you can enjoy a meal while soaking up waterfront views.

Mediterranean Breeze is now one of them and the popular spot offering both indoor and outdoor dining has gained a quick following of fans raving about the restaurant’s brick-oven pizzas and Mediterranean-inspired sandwiches, salads and entrees.

I can see why so many people like it and I’m mostly a fan of the food I’ve tried, which has ranged from good to great. But service has been inconsistent and COVID-19 compliance has been extremely lacking on each of my visits.

The restaurant offers a pretty expansive menu, so I visited several times to make sure I could try lots of what they had to offer.

Although their take on fried feta comes up short when compared to Adelphia’s masterpiece, I enjoyed a Mediterranean veggie platter full of hummus, baba ganouj, tabbouleh, grape leaves, falafel and pita bread. Everything on it was good except the falafel, which was very dry and bitter.

We liked the beef shawarma wrap with marinated and roasted slices of beef tenderloin wrapped in fresh pita bread with tomatoes, onions, pickles, sumac and tahini sauce. I loved the taste and toppings on my half Manaeesh (cheese) and half Za’atar (herb) pie, but the thin crust was so charred on the bottom that it left my fingers black.

We enjoyed the surf and turf kebabs, featuring nicely cooked filet mignon and shrimp, and my coriander and olive oil-poached Greek salmon with buttered turnips and mixed greens on sourdough toast was absolutely fantastic.

There’s also a house-made Sicilian roll stuffed with pepperoni and three cheeses, and a huge portion of cast iron-baked spaghetti smothered in three cheeses as well.

The food is not the problem here.

While the servers I’ve had have all been pleasant and hustling, the actual service provided has been spotty. There have been long waits to be acknowledged upon entering the building, long waits for someone to take our order and long waits for food to arrive, which usually all wasn’t served at the same time.

Part of the service challenge is because the place is drawing such large crowds that it’s often too busy for the staff on hand to manage, and part seems to be due to a lack of organization or actual management of said staff and crowds.

I won’t be returning to Mediterranean Breeze anytime soon, but I do hope they get their house in order. It would be awesome to have another nice, safe riverfront dining option in the Kanawha Valley.

I want to thank everyone who continues to share their good and bad dining out experiences with me when it comes to COVID-19 compliance.

Although I won’t publicly name a restaurant unless I see the infraction in person myself, I think it’s important for readers to be aware of what’s happening so they can be on high-alert on things to look for when they dine out.

Here are a few “edited” comments I’ve received just this past week about restaurants around the valley.

“We love _____ and have continued to do carryout since the pandemic began,” one reader shared. “I ran in Sunday evening to get a takeout order and was actually scared to stand in there. They had people lined up on top of each other to get a table and a line to pay or pick-up. I tried to stand over against the wall, only to be told that I couldn’t stand there. There was literally nowhere to go to get away from the crowd. I definitely think they need to fix that situation.”

And from another: “Thank you for everything you do. I love your reviews and your writing and how kind and considerate you are when citing the disappointments you encounter. I support your position on calling out restaurants for not following COVID-19 safety protocols, which is what compels me to write.”

He went on to describe a real contrast of restaurant experiences.

“I’ve recently begun dining out again and find restaurants’ efforts to provide a safe environment reassuring. I thought I’d try pizza restaurants I haven’t tried before, so last week I picked up a pizza from _____. It was delicious and I was pleased to see the protocols they had in place. No customers were allowed inside. We had to order from a window. The person who took our order wore a mask and the person who brought out the food wore a mask. There were a few tables outside and they were spaced appropriately.

“Then this week, I picked up a pizza from _____. None of the employees wore a mask. The prep area is small and the employees were in very close proximity to each other, often brushing against each other. There was no plexiglass shield at the counter for ordering and paying. It was dismaying and very disappointing that there was a total disregard for the safety of the employees and customers, and no effort whatsoever was made to provide a safe environment. It was completely the opposite of what I encountered at the other place.”

I hated to hear this, but wasn’t surprised, since I’m witnessing more restaurants becoming increasingly lazy when it comes to COVID-19 compliance.

They can, and simply must, do better.

I encouraged him to contact the health department with his concerns. He did the next day and reported back that he received a quick response saying they do now consider COVID-19 safety protocols when inspecting restaurants. They even asked for the name of the restaurant in question, which he gave them.

“I’m sure restaurants are struggling during the pandemic and I don’t want to make it harder for them,” he told me. “However, it’s for the public good that they make every attempt to follow all health safety protocols and it should cost very little to require employees to wear face masks and put up a plexiglass barrier at the counter, or at least place a table in front of the counter to provide a safe distance between customers and employees.”

Couldn’t have said it better myself.