The rustic cafe fits into its natural, wooded setting. 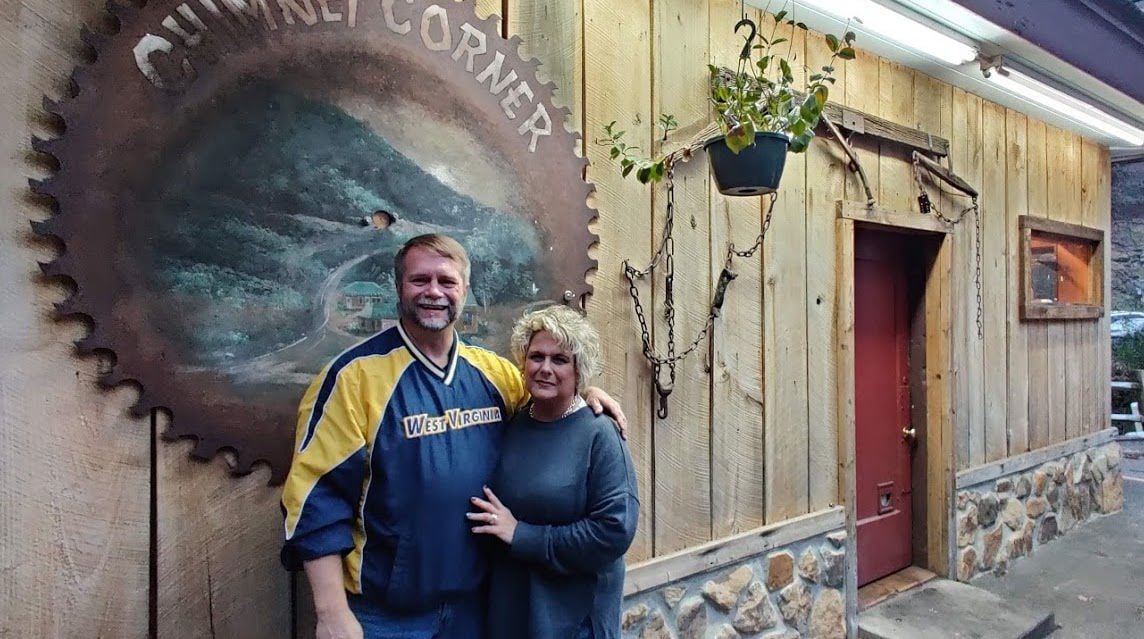 Thomas and Beth Burdette in from of their Chimney Corner Cafe. 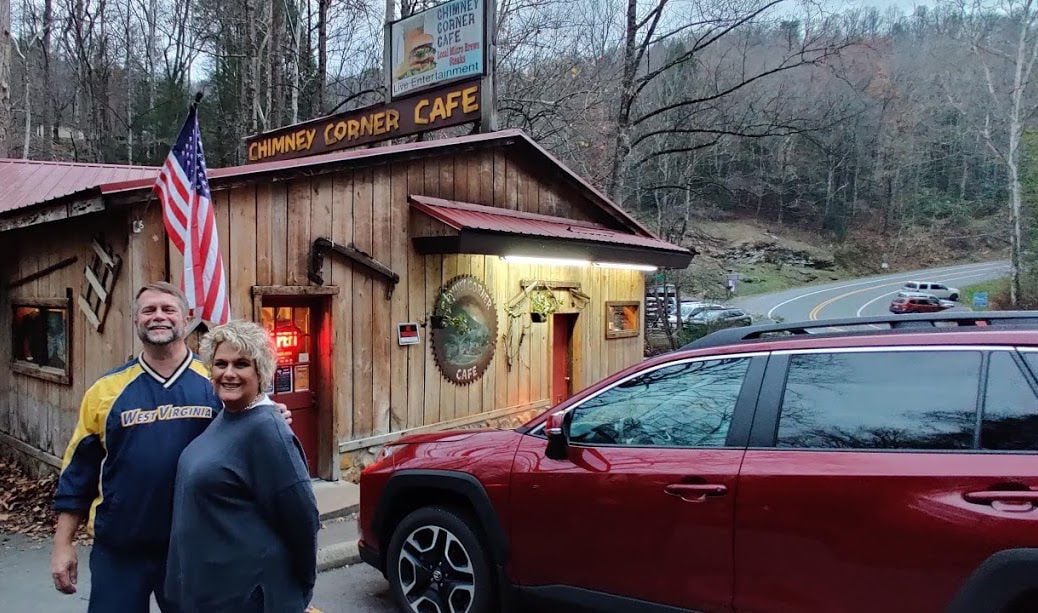 Thomas and Beth Burdette in front of their Chimney Corner Cafe.

The outdoor amphitheater at the Chimney Corner Cafe is booked through the end of the year with musical performances. 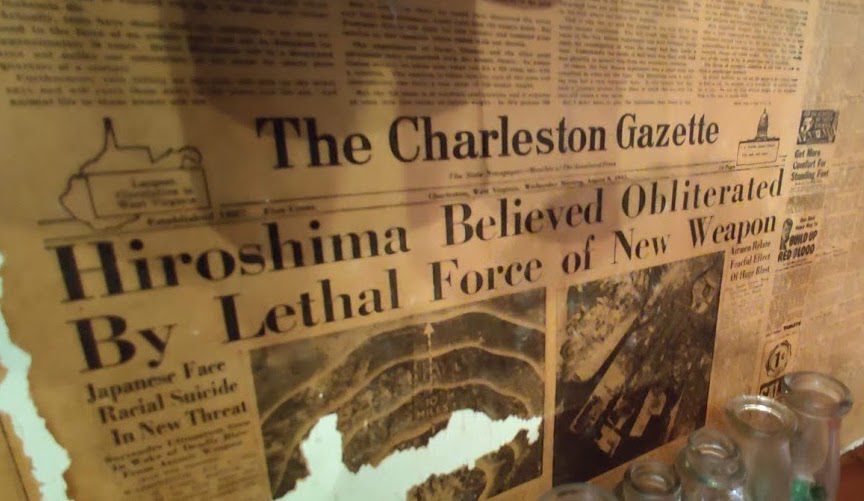 From half a world away, Stalin’s death made news in West Virginia in 1953.

The Chimney Corner Cafe in a previous life.

The rustic cafe fits into its natural, wooded setting.

Thomas and Beth Burdette in from of their Chimney Corner Cafe.

Thomas and Beth Burdette in front of their Chimney Corner Cafe.

The outdoor amphitheater at the Chimney Corner Cafe is booked through the end of the year with musical performances.

From half a world away, Stalin’s death made news in West Virginia in 1953.

The Chimney Corner Cafe in a previous life.

At twilight, the parking spaces that surround the rustic venue quickly fill up as the Beckley-based Hit and Run launches into its first set.

In the middle of the coronavirus pandemic, the buzz of socially distant activity in tiny Chimney Corner — at the horseshoe bend of U.S. 60 where it joins W.Va. 16 just west of Hawks Nest State Park — seems a bit incongruous.

But for Oak Hill residents Beth and Thomas Burdette, who last spring leased and resurrected the two-years-shuttered Chimney Corner Cafe, the uniquely rustic New River Gorge venue is the right place at the right time.

“The big push has been outside, outside, outside,” said Beth Burdette, taking a break from her ever-shifting multitude of duties. “It’s been wonderful for us as far as that goes. A lot of weekends we run out of food. We start Sunday with a very limited menu because there’s nothing left.

While winding their way through the unincorporated crossroads, locals and seasonal tourists alike find themselves enchanted by the revived oasis.

“People come by all the time and say, ‘I didn’t realize it was all this,’” Beth said. “There’s so much to take in. People stop for a beer and end up staying.”

Despite its sublimely natural charms, the cafe’s initial wave of success took the Burdettes by surprise. After trying to keep their short-lived Red Oak Grill going in downtown Oak Hill during COVID-19 times, they’d basically sworn off the restaurant business.

“COVID helped shut it down in the spring (of 2020),” Thomas Burdette confessed. “We just couldn’t let anybody in the restaurant.”

Working as operations director in “everything from fast food to fine dining” for 35 years, the 56-year-old Thomas said he was “dead set against” another food-related business venture.

“I had soured on the restaurant business.”

That changed soon after Jim Campbell entered the Burdettes’ lives.

The Ansted resident bought Chimney Corner’s Ain’t Ya Et Yet? Cafe in 2006. He added on the covered deck area and amphitheater and decorated the cozy indoor room with vintage newspapers found in the historic Page-Vawter House in Ansted — more on that in a moment. Campbell leased the newly named Chimney Corner Cafe to another operator, who kept it going until closing in 2018.

So the business died — but Campbell’s dream lived on, and finally found footing again during negotiations over a piece of culinary equipment earlier this year.

“It all started over a bread maker,” Beth Burdette said with a chuckle. “He bought it to where I worked in Fayetteville.”

As they discussed sale of the machine, Campbell picked up the common thread in their backgrounds.

“He said, ‘Oh, you have a restaurant?’” recalled Beth, who was then splitting time between the Red Oak Grill and her office manager job.

Campbell persuaded her to visit the shuttered Chimney Corner eatery. The way the low-slung, wood-frame building meshed with its sumptuous surroundings gradually wore down Beth’s resistance to opening another food-based business.

“My dad’s from Gauley Bridge,” she said of the town a few twisting miles to the west. “Coming through here in the summers as a kid, this place had a significant meaning to me — all the memories.”

One rainy afternoon in March, Beth shared an epiphany with her even-more-reluctant husband.

Thomas came up short on a convincing counter-argument, that’s pretty much all it took.

“So it all happened over a bread maker,” Beth said with a grin. “Now I’m too busy to fool with it, because I’m always down here.”

When the coronavirus pandemic eventually clears and life returns to something resembling normal, the new cafe’s indoor seating area will provide a cozy nook to dine in the company of 20th century history.

The front pages of well-preserved vintage newspapers — the Fayette Democrat, New York Times, and Charleston Gazette and Daily Mail among them — serve as laminated wallpaper in the former Ain’t Ya Et Yet? Cafe’s “Newsroom.”

Cafe founder Jim Campbell found the newspapers in a closet of the Page-Vawter House he and his wife, Debbie, own in nearby Ansted. Marveling over the papers’ excellent condition, he decided they’d make a quirky, yet historical complement to his new restaurant.

“My wife was throwing out some stuff, and I said, ‘What is this?’” Campbell recalled. “‘Oh, just some old stuff,’” she told him.

Julia and Eugene Vawter, the late Fayette County educators who built the sprawling house, apparently socked away the newspaper pages.

“They saved all these headlines over the years and threw them in a box,” Campbell explained. “When we bought the estate, that was one thing we discovered.”

Thomas Burdette thinks the history-drenched decor adds to the allure of his family’s new rustic restaurant.

“I think it’s neat,” he said. “The history part of it needs to be preserved so people know it and are seeing (how it was recorded).”

Campbell, who dropped by the cafe on a recent Saturday, is pleased the Burdettes like the ambiance and are carrying on the spirit he envisioned for the venue.

“This is a unique property,” he said. “Not everyone gets it.”

The Burdettes closed their Red Oak Grill on May 10. After what Beth described as weeks of “busting our tails working day in and day out,” they opened the re-imagined Chimney Corner Cafe on June 13.

“We pressure-washed (the deck and amphitheater), cleaned and got the food and equipment,” she said.

By accident or design, the couple’s timing proved impeccable — and more lucrative than they expected.

“What we’ve done monthly has been in the double-digits ... lots of zeros,” Beth noted. “People stop in and say, ‘Oh, my gosh. This is open again!’ They say they’ve never seen anything like this before.”

Augmenting their offerings from the Red Oak Grill (motto: “Where Southern Meets Appalachian”), the Burdettes crafted a menu to suit their customer base of local families, motorcyclists and laid-back tourists.

“It was what would be good for that. Some of my strengths and [Beth’s],” Thomas Burdette said. “We looked at how to transition in the wintertime with comfort foods.”

Beth cites Thomas’s “mean smoked pork and ribs” among her favorites. “It’s amazing. He and [head chef] Wes Lewis smoke everything. And our Almost Famous Fat Girl Mac ‘N Cheese has been with us since our catering days.”

From hand-pattied burgers and pulled pork nachos to baked green beans and potato salad, they “do everything from scratch,” Beth said. “The sauces, everything. We don’t even have fries. The ribs are amazing.”

To meld the setting and homespun menu, the Burdettes make a point of integrating the fetching amphitheater next to tranquil Big Creek into the full cafe experience.

“We’re booked through the end of the year with music,” Beth said. “We don’t even have to look.”

“If someone wants to play here, I require a video clip so we do not have somebody coming in who is horrible and not kid-friendly, with lots of [foul] language,” Beth noted. “I try to monitor that closely. [Musicians and bands] message us all the time.”

She credits property owner Jim Campbell for creating a stage that accommodates a quality listening experience.

“The acoustics, the sound that flows out of that is amazing. [Campbell] is a sound guy,” she said. “People love the way it sounds.”

As tourist traffic subsides in late fall, the Burdettes rely mostly on local traffic to keep things going. Still, they never really know who will show up on any given afternoon or evening.

On one recent Saturday, Jeff and Sue French stopped in for lunch during a sightseeing detour on their way home to Versailles, Indiana.

“We were around here 20 years ago,” Jeff French said. “We said, ‘Hey, let’s take (Route) 60 instead of the boring interstate.’ We make it longer because it’s pretty. We stopped at Hawks Nest and asked ‘Where’s a nice little diner?’ and [a park employee] told us about this. It’s great!”

Local residents like Amy and Leo Montalvo have found the Chimney Corner their key destination for lovingly made casual fare and great live music.

“We like this place. It has the coldest beer around,” Amy Montalvo said. “And the atmosphere, how it sits back in the mountains off the beaten path. There’s always somebody new and always a familiar face.”

“So far, every time we’ve been here, there’s been a kick-ass band,” Leo added.

For the Burdettes, who have one grown son working in Beckley and another at West Virginia University, testimonials like this reinforce their decision to remain in the hospitality business.

“It’s just a peaceful feeling you get when you’re in a certain situation. A peace kind of settles in,” Thomas said. “People tell me, ‘You seem so relaxed out here, not stressed.’ How can you not be relaxed out here? It’s so easy.”

“This is where I belong. This is our peace,” she said, turning to face her husband. “When there’s nothing going on and you hear that rain on the roof and that creek, it’s the best, isn’t it?”

NOTE: The cafe will close for the season at the end of December and reopen in March