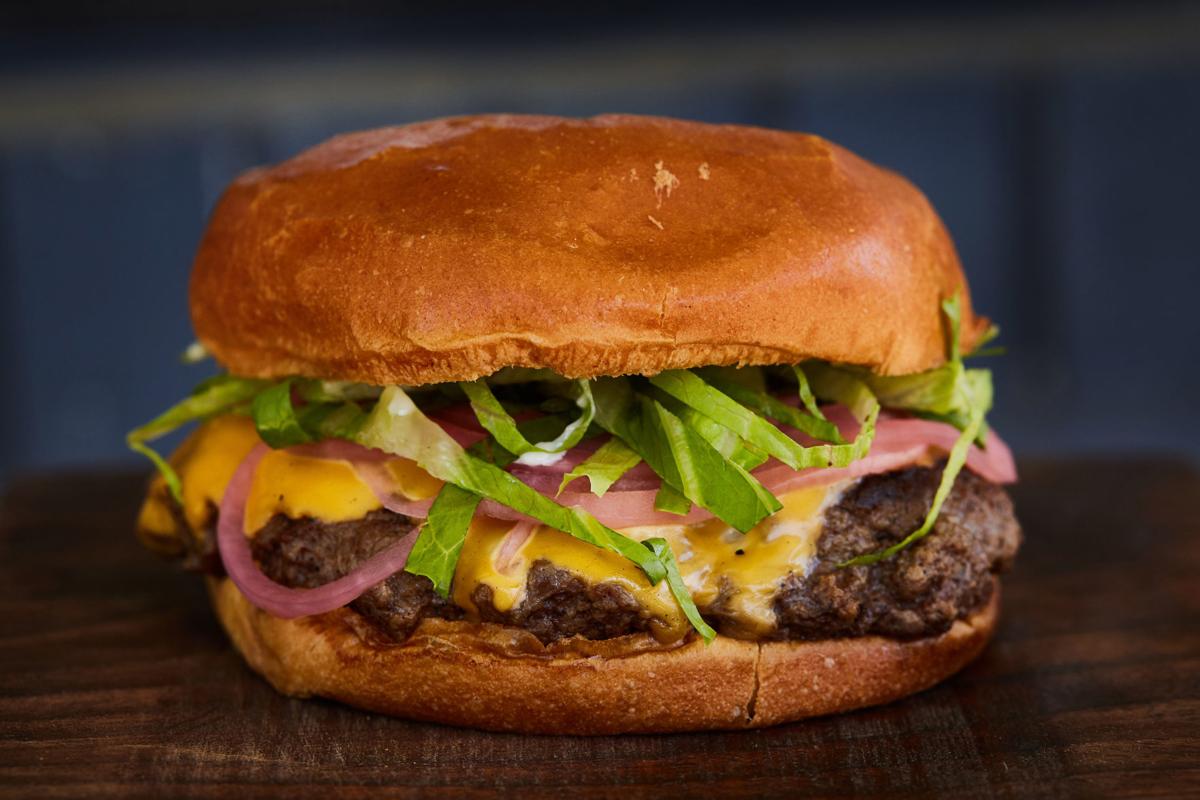 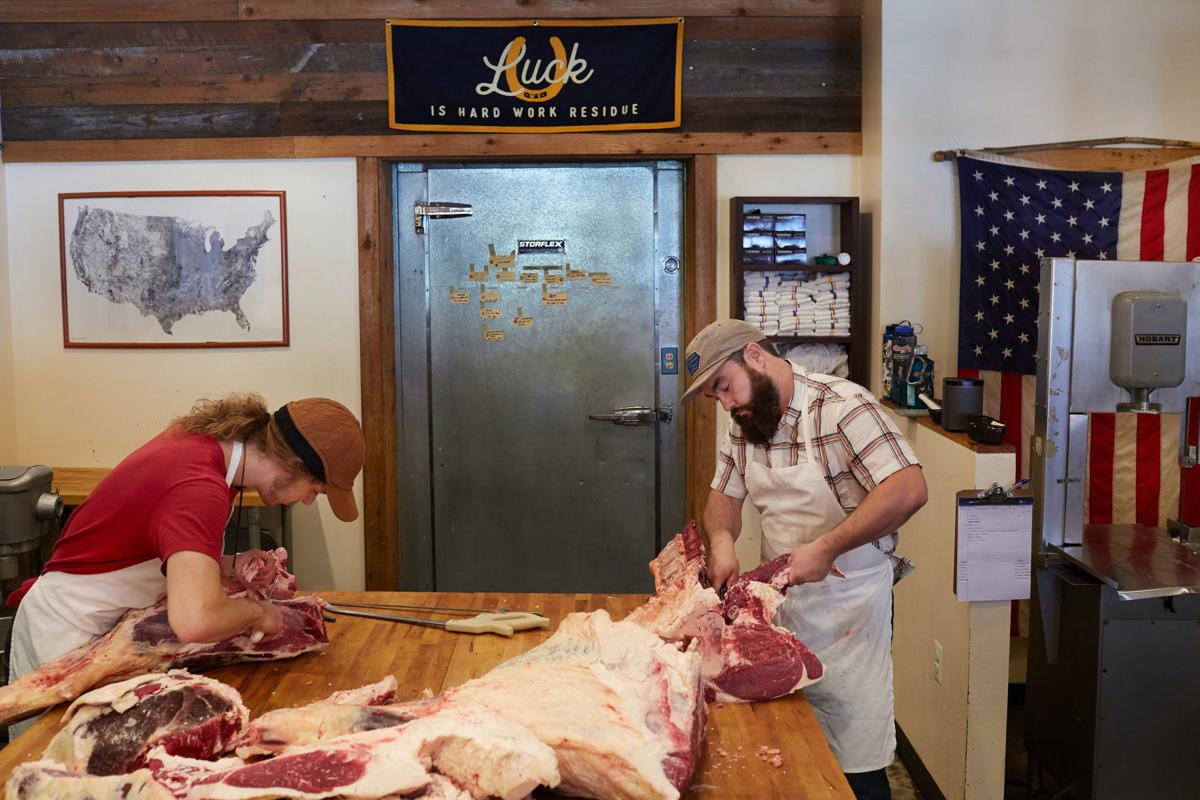 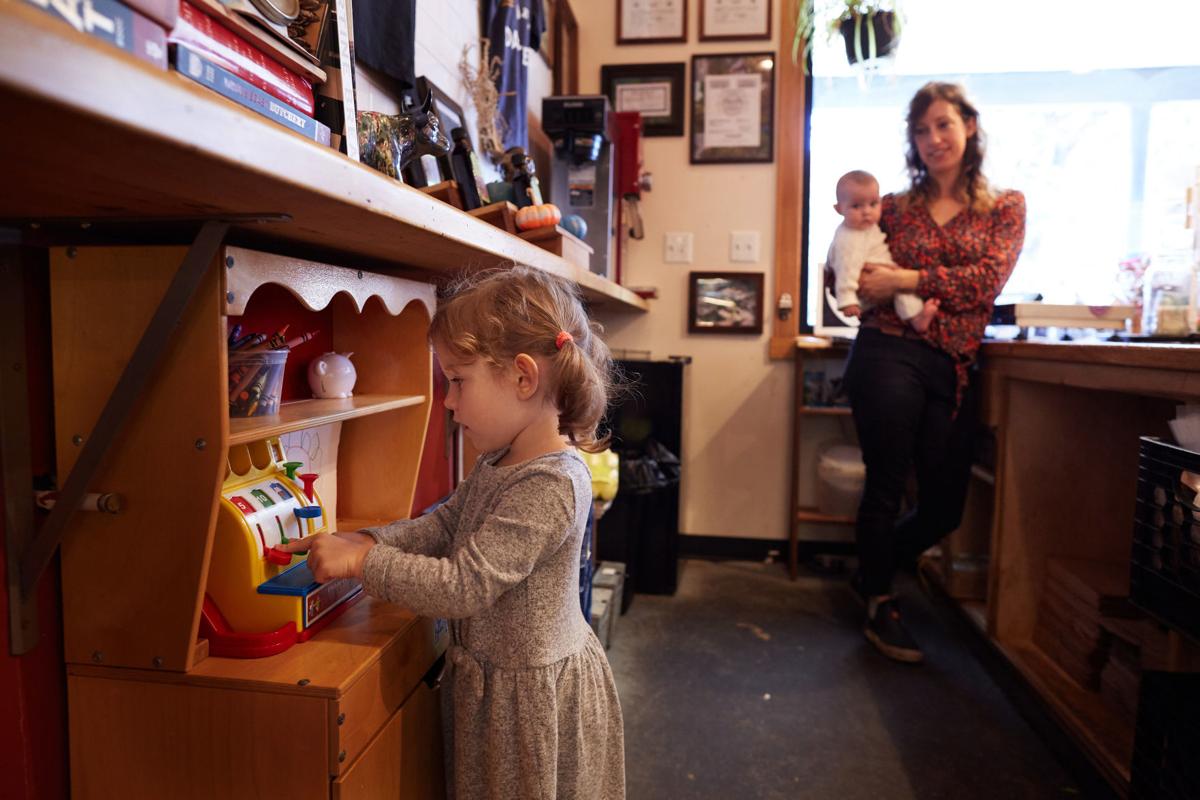 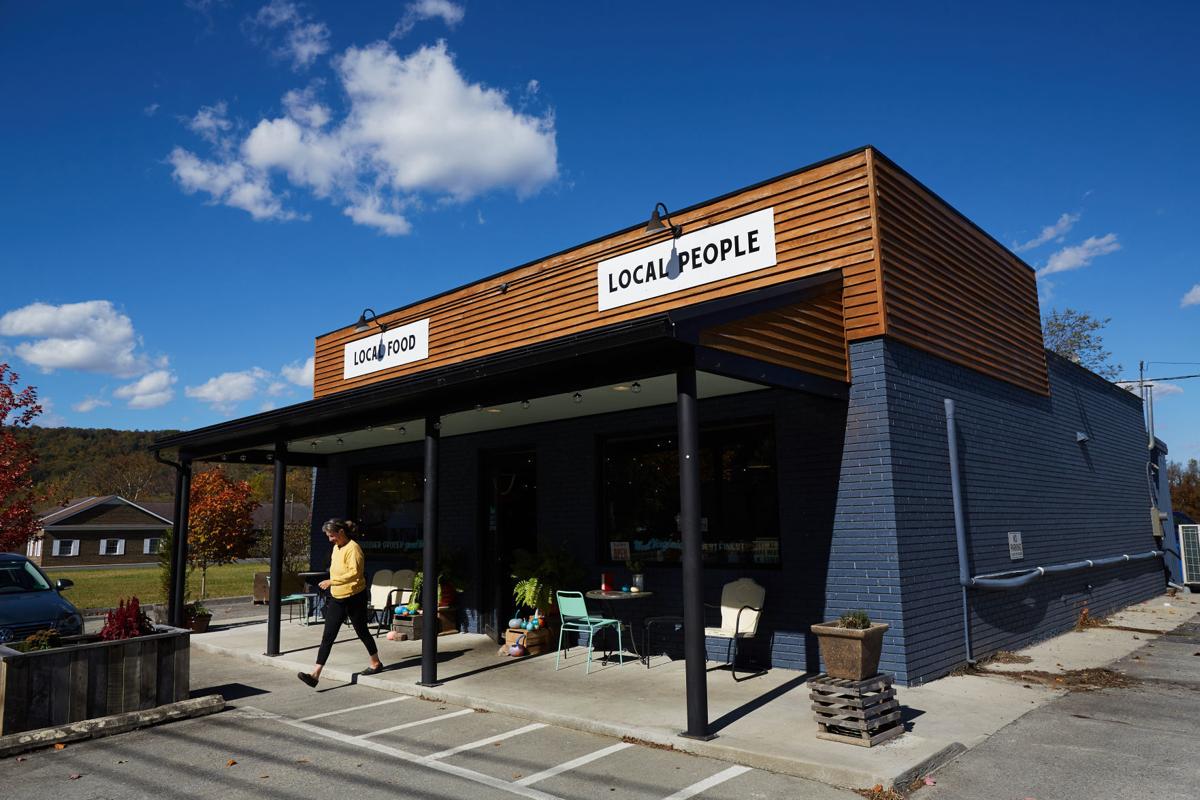 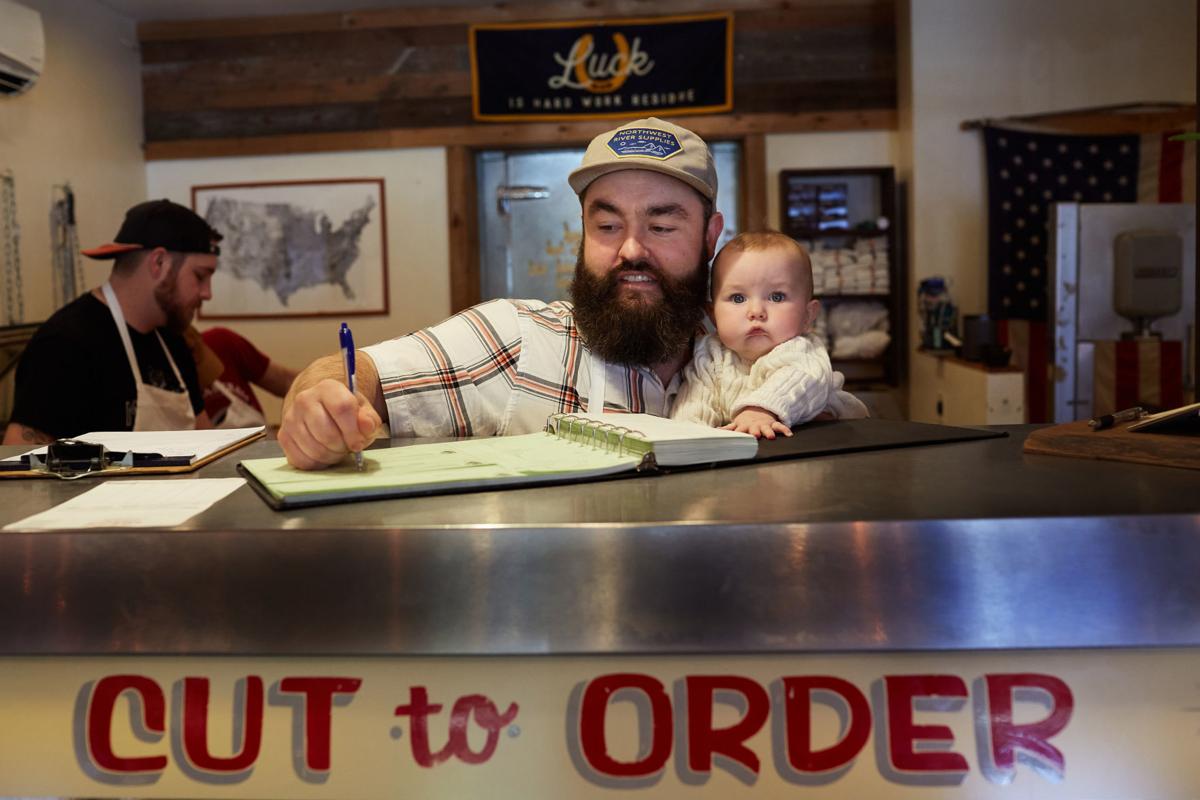 Pete Pacelli holds Margo while writing a check to a vendor.

Pete Pacelli holds Margo while writing a check to a vendor.

CAPON BRIDGE — Like characters from “High Fidelity,” my friends and I are constantly making, revising and debating lists of our favorite burgers. The entries in these hallowed pantheons hail mostly from high-end restaurants in major cities. We learned about them from food writers and best-of lists.

Which is why I was hesitant to trust my own judgment when I tried the cheeseburger at the Farmer’s Daughter, a butcher shop and grocery in this tiny town. I marveled at the patty’s minerally, meaty flavor, its richness set off by the acidity of pickled red onions and the leafy crunch of romaine. I oohed over the perfect, pillowy brioche bun and the just-right coating of melty American cheese. This was eye-rolling, polish-it-off-before-you-remember-to-’gram-it good.

But still there was that nagging thought: Could I really have just stumbled upon one of the very best burgers out there? Was this $8 dish being made in a former ice cream drive-thru next to a tire shop and a Family Dollar, in a speck of a town, truly world-class?

After multiple visits (this was a hypothesis worth testing) and affirmation from the friends I’ve introduced it to, I’ve become confident in my initial assessment. Yes, we had indeed struck burger gold in those hills.

The magic of this unexpected discovery made more sense when I met Pete Pacelli, who owns and operates the nose-to-tail butchery with his wife, Kate Pacelli, the daughter in the shop’s name. Though their shop has a good-times vibe, with Johnny Cash and Lucinda Williams tunes playing and his young daughter’s toy cash register parked behind the real deal, Pacelli is serious about meat.

Pacelli — whose thick beard and wardrobe of plaid shirts give him the look of a lumberjack — and his staff carve up a 700-plus-pound steer and three whole hogs a week. They go through a lamb every other. All of it winds up in the shop’s refrigerated cases as various cuts, a rotating array of sausages, pates, hams, head cheese and bone broths. Even the pig snouts and ears are dried and sold as chew toys for dogs.

The suppliers are local; the beef comes from a family farm 45 minutes west of the shop, where it’s pasture-raised, free of antibiotics and hormones, and aged for 15 days.

Which brings us back to that cheeseburger. When the couple decided to start offering lunch in addition to the meats and small grocery selection about a year and a half ago, Pete imagined a burger in which the meat was the star of the show.

“We wanted to do a classic burger,” he says. “But it’s the super-beefy flavor, that really unctuous, beefy thing that really sets it apart.”

He selected the cuts for fat content and big-time flavor: chuck from the shoulder, round and a dry-aged short rib. They’re double-ground, and the meat is then formed into 1/3-pound patties, which are sprinkled liberally with salt and pepper. The griddle choreography that takes it to a medium-well doneness and a flattened shape is precise: Brown, flip, smash, flip, wait for telltale juice pooling, flip again, top, and cover briefly to melt the cheese.

The rest is simplicity, but each element is carefully considered. The brioche bun is right-sized. The mayonnaise is Duke’s (“the best mayo in the world — it’s not just sandwich lube, it’s got flavor to it”). The onions are pickled in house. The shredded lettuce is romaine, not iceberg, because Pacelli likes the stronger flavor.

That this burger exists in Capon Bridge is something of an accident: The Pacellis really weren’t supposed to be here at all, see. Though, like so much of their story, it seems predestined.

Pete stumbled onto butchery after bumming around for a bit after high school in Winchester, Virginia, delivering Chinese food, before deciding to pack up his old Subaru and move to Portland, Oregon. He wasn’t yet chasing a culinary dream, even though butchering was in his bones; his great-grandfather and great-great-grandfather were both in the business.

“I just realized that all my friends were moving out, and I figured I should, too,” he says.

He eventually got into the thriving food scene in his new city — and met Kate.

Even the story of how the two connected seems fated. Kate had grown up in Arlington, Virginia, and her parents moved to a farm in Capon Bridge, about 17 miles from Pete’s hometown. She was working at a hostel in California when she visited friends in Portland who introduced her to Pete.

“She wasn’t looking to meet a Virginia boy,” he says.

Despite that reluctance, the two were soon a couple, and eventually moved to Asheville, North Carolina. That’s where Pete’s meat journey really began, at a butcher called the Chop Shop.

“I started in the dish pit,” he says. “They didn’t let me touch a knife for three months.”

He worked his way up to sausage-making and more advanced work.

And he nearly set up his own shop in Asheville. He and a partner had plans for a butchery, but just before they were set to sign a lease, the partnership fell apart. Pete went to work with a childhood friend who owned J.M. Stock butcher shop in Charlottesville, Virginia, and did a week-long apprenticeship at the Meat Hook in Brooklyn.

A deus ex machina soon steered them to West Virginia when Kate’s parents called with a proposition: They had purchased an old ice cream shop a few miles from their farm and were looking for energetic young people (cough, cough) to run it as a grocery store. Did they know anyone who might be interested?

Their little hamlet was a rural food desert, with the nearest stores selling fresh produce half an hour away.

“My dad’s thinking was, ‘What does this town need?’” Kate says. “But I think it was partly a play to get us back here.”

They immediately drove to Capon Bridge and arrived at the property in the pitch dark, wielding flashlights to check out the potential project. Things didn’t look promising. The building had started out its life as a Tastee Freez knockoff called Big T, and was crowned with a strange, mushroom-shaped roof. It had sat vacant for eight years by the time they arrived.

But it didn’t take long for the couple to decide to go for it.

Getting the building into shape required a modern-day barn raising. Family and friends pitched in. They spent their days installing drywall and grinding down concrete floors. Out of money, they used Kickstarter donations to complete the project. Within months, the run-down building was transformed into a warm, rustic-meets-sleek market. Old barnwood wraps the checkout counter, and the shelves are filled with produce and grocery staples, craft beer and wines.

When they opened their doors, they weren’t sure what to expect.

“We had nothing on the shelves except condiments and chips,” Kate recalls.

Still, they sold out of everything — and since then, they’ve made adjustments and adapted to their clientele, a mix of locals and weekenders from the Washington suburbs. They started out raising their own chickens, but feeding and caring for them while running the shop (and raising one and now two daughters) was too much. They tried serving lunch but couldn’t manage it at first.

Now they’re offering the burger and an Italian sandwich along with a daily sandwich special. They’re up to four employees: three butchers and a part-time grocery manager.

They’ve become part of the community, hosting dinner-and-movie nights in the parking lot, where they serve themed burgers and neighbors settle into lawn chairs. They donate fruits and vegetables from local farmers to the food bank. They buy animals raised by local Future Farmers of America kids at an annual auction that helps fund their college tuition.

“Some months, we pay ourselves, some we don’t,” Kate says.

As I wrote this story, I started wondering what might happen to this place, literally a mom-and-pop shop where you might see a muddy-booted farmer next to a slick leaf-peeper from the city, once it publishes. Maybe it would be great for business, but there could be a dark side to the exposure. What if hordes of Instagramming food tourists descend? Other food writers have wrestled with this, the idea that you could ruin something you love by introducing it to the world. Not to overstate my influence (I’m no Guy Fieri, after all), but national media attention could change things.

Friends, knowing the story would soon run, joked that they were glad to have a heads-up so they could get a last fix before the lines form.

Could Pete keep up? I asked him, and he just laughed. “We’re up for the challenge,” he says. “It sounds like a good problem to me. We’re excited, and if we have to scale up, we will.”

Whether the crowds show up or not, Pete says the real reward is the small-town, small-business lifestyle. On a recent morning, 6-month-old Margo is parked in a baby seat on top of the hulking butcher block, while 4-year-old Josephine can often be found behind the counter at her mother’s feet.

And then there is the feeling of connection. They know their suppliers. They know their customers. They’ve lost only three butchers in 41/2 years, a turnover rate that any business owner would envy.

“We feel so fortunate to be out here,” Pete says.

But there’s little time to reflect. He’s got the next day’s special — a beer-braised beef that he’s thinking about pairing with some local cheese and maybe some roasted peppers and parsley — in the oven. A delivery is on its way.

Customers are trickling in, including an older man who asks if Pete might want a bushel of jalapeño peppers he’s just picked — after they turned red because he waited too long to harvest them.