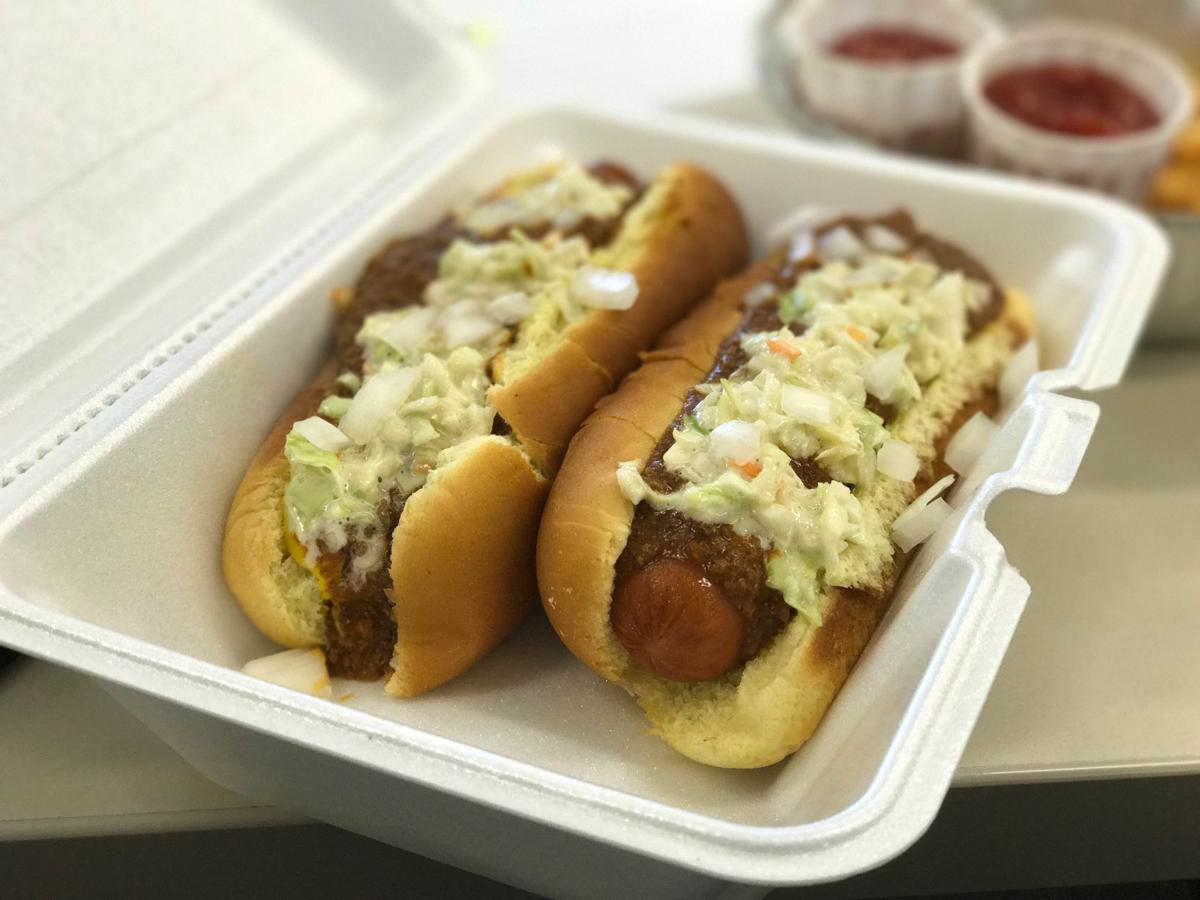 The West Virginia hot dog comes with chili, slaw, mustard and onions. Do you call it “chili” or “sauce?” While they refer to the same ingredient, some areas of the state prefer one term over the other. 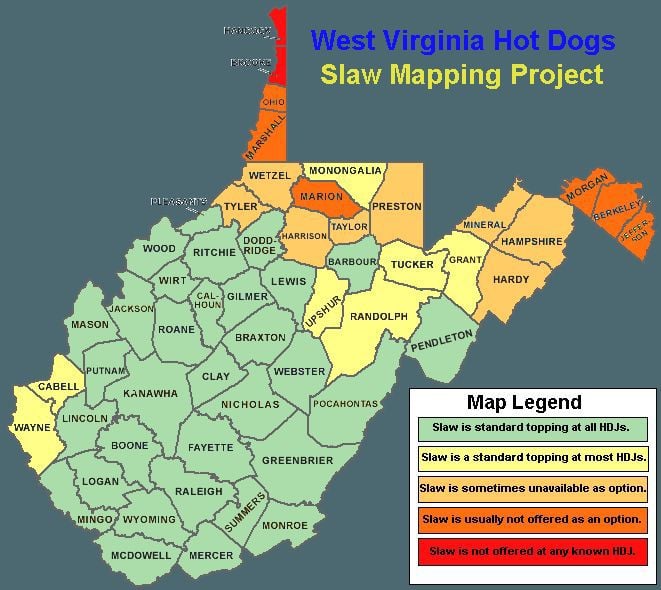 The slaw map, created by the West Virginia Hot Dog Blog, draws a line between the counties that use slaw as a standard topping to counties where it’s difficult to find slaw as a topping.

The West Virginia hot dog comes with chili, slaw, mustard and onions. Do you call it “chili” or “sauce?” While they refer to the same ingredient, some areas of the state prefer one term over the other.

The slaw map, created by the West Virginia Hot Dog Blog, draws a line between the counties that use slaw as a standard topping to counties where it’s difficult to find slaw as a topping.

Maybe even the Seattle-style dog, covered in cream cheese, grilled onions, and sometimes jalapeños or cabbage.

For those of us in the Mountain State, though, the West Virginia hot dog reigns supreme: crowned with a meaty chili, coleslaw, yellow mustard and chopped onions.

Hot dogs are the quintessential American food. With roots in German sausages, the hot dog immigrated to America and became a humble, working-class street food. Folks could peddle the cheap meal and make a few bucks, fulfilling that bootstrapping American dream.

Regional hot dog variations developed from this endeavor. Some were created simply to add something new to the hot dog, while others drew inspiration from various cultures. The hot dog provides a blank canvas for which those with Italian heritage can add peppers and onions, those with Mexican heritage can add pinto beans and vegetarians can add vegetables to their “hot dog.”

The West Virginia hot dog likely draws on those close community relationships and economic resources in the Mountain State for its toppings.

“Potluck dinners have always been an important part of building and strengthening community ties between neighbors, and the West Virginia hot dog fits neatly into that idea,” said Christopher Scott Jones, geographer in Huntington. “The man down the street who grows cabbage can bring the slaw, the lady across town who makes a mean chili can bring the sauce, and those with less culinary skill can bring weenies, mustard, buns or onions.”

Jones is an occasional contributor to the West Virginia Hot Dog Blog, which documents the cultural phenomenon of the West Virginia hot dog, in addition to reviewing hot dog joints. It also serves as the authority on the culinary delicacy.

Stanton Means, founder and head weenie wonk of the West Virginia Hot Dog Blog, expanded on the idea that the local hot dog specialty was crafted from the food that was available when the community — and country — was facing hardship.

“Coleslaw was first sold as a hot dog topping at the Stoppette Drive In, just outside Charleston on Route 21. This was in the 1920s, during the Great Depression. Cabbage was a readily available and easily preserved garden vegetable, and wieners were a very inexpensive meat. Combining the two probably started as a way to provide some bulk to a basic chili dog, but it caught on.”

The simple hot dog topped with ingredients from backyard gardens or dinner leftovers became a local favorite. The West Virginia hot dog was born both from utility and creativity. And people loved it.

“By the 1930s, there were lots of ads for hot dogs served with coleslaw in the Charleston newspapers. It had spread through the coalfields by the early ’40s. The only place that it is widespread outside of West Virginia borders is North Carolina, where West Virginians moved looking for work in the ’50s and early ’60s. It occurs occasionally in Alabama and Georgia,” Means said.

And, while the West Virginia hot dog can be found throughout most of the state, there are even some small regional differences. For example, some areas in North Central West Virginia opt for no slaw on their hot dog.

“The center of the anti-slaw resistance is Marion County,” Means said. Instead, that area focuses on the chili — a spicier sauce influenced by its Italian heritage, according to the blog. The West Virginia Hot Dog Blog created a “slaw map” to illustrate the counties that include slaw as a standard topping, and as the map moves north and east toward the panhandles, slaw is less common.

“People [in Marion County] resist slaw on hot dogs with a religious-like fervor. The map I created in 2006 has been proven mostly true, but there are always those rogue hot dog joints that pop up to blur the lines and move the frontier a little outward. Even in Fairmont, there are hot dog joints now offering slaw as a topping. After nearly a hundred years, slaw acceptance is still gaining ground.”

And whether to call the meaty topping “chili” or “sauce” is still up for debate. In places like Marion County, and the Huntington area, it’s almost exclusively sauce.

“First, let’s make sure that when you say chili that you are speaking of hot dog chili and not the kind of chili that has beans in it and you eat from a bowl. That stuff has no place on a hot dog. But as for hot dog chili, it is mostly the same stuff with the same ingredients as hot dog sauce. Where people call it sauce, its consistency is usually a little bit thinner, but, otherwise, there is almost no difference. Both sauce and chili can be wide ranging in taste and spiciness from location to location,” Means said.

Whether you call it chili or sauce, the West Virginia hot dog plays a role in the lives of West Virginians near and far.

“For most West Virginians, a hot dog is not a hot dog unless it has chili/sauce and coleslaw. And when West Virginians travel to other states, they are often befuddled that people everywhere do not include these basic ingredients. This common experience is, I believe, at the root of why West Virginians hold so fast to the lowly hot dog as part of their heritage. It is a key, unifying little piece of culture that is uniquely ours,” Means said.

“There is a strong connection to this simple food that cuts across all kinds of political and economic lines. It is the most common item served at the church picnics and the volunteer fire department fundraiser. It is the fast food grandma made at her house and the go-to late night food in college towns. And with chili and slaw, it is uniquely ours and we are proud of that.”

Like many Appalachian food traditions, the creation of the West Virginia hot dog speaks to the resiliency and innovative capability of West Virginians. Something as simple as a hot dog topping helps define our food culture and what we value in our food.

These small signifiers help illustrate a larger cultural identity — that West Virginians are resourceful, community-driven and can make one mean hot dog.

Candace Nelson is a marketing professional living in Charleston. In her free time, Nelson blogs about Appalachian food culture at CandaceLately.com. Find her @Candace07 on Twitter, or email CandaceRNelson@gmail.com.