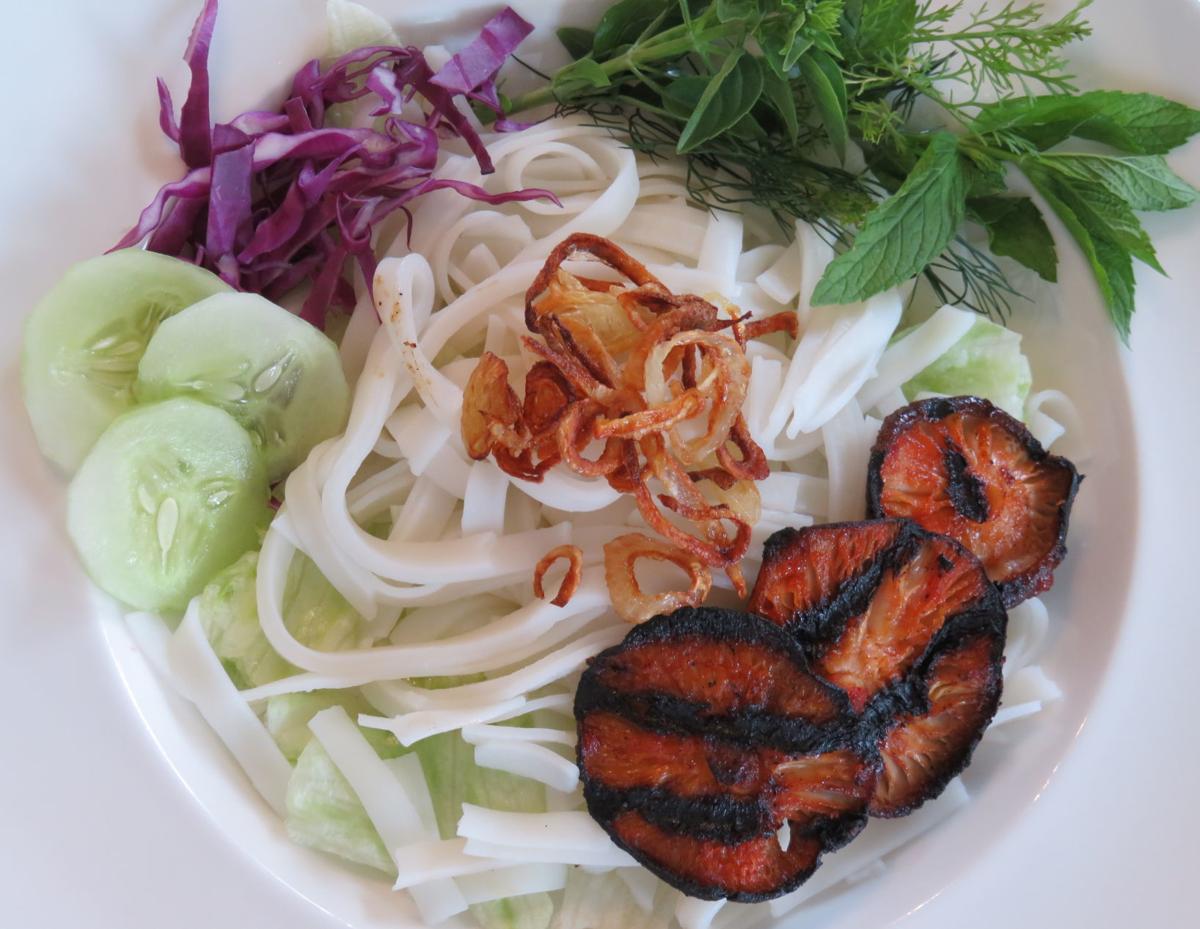 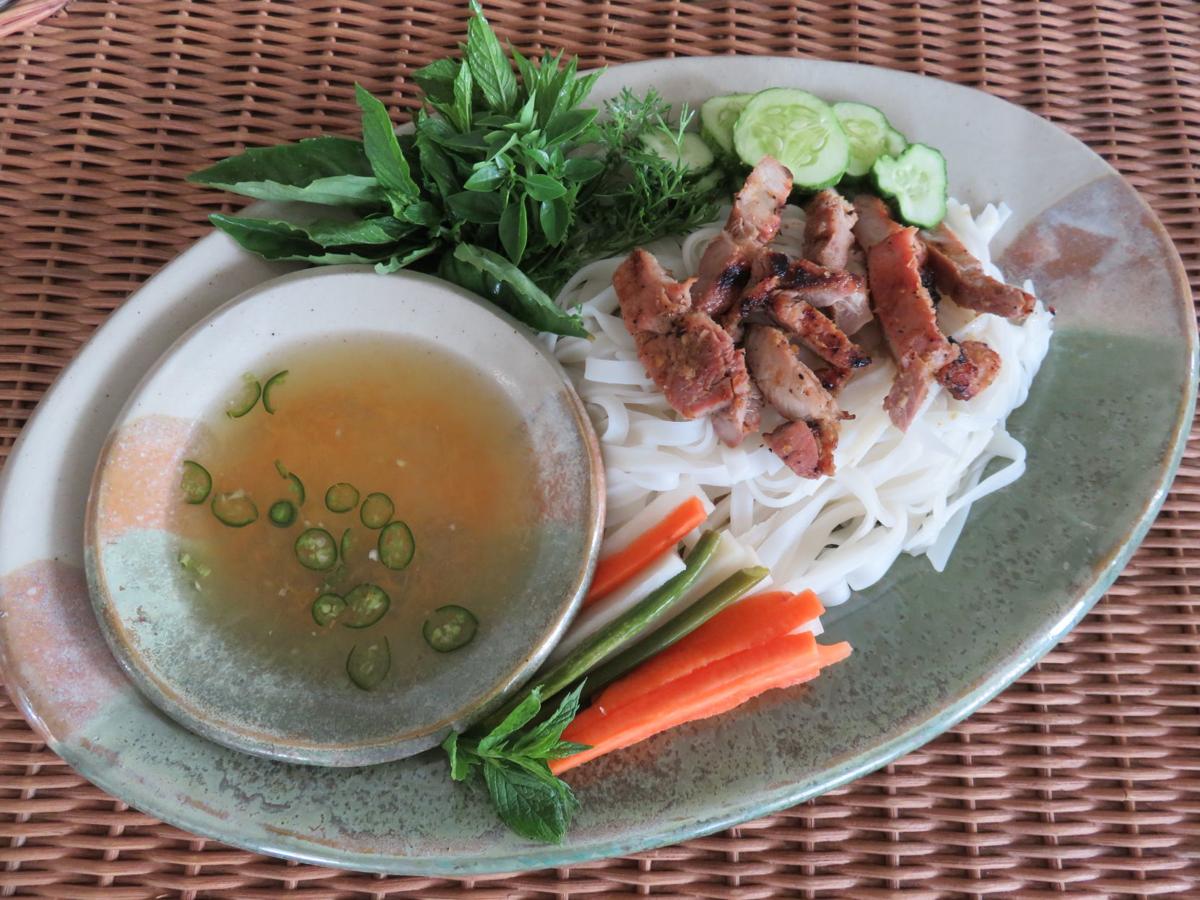 This is the time of year when our house is filled with the scent of pungent herbs, simmering beef broth and fish sauce. Vietnamese cuisine takes center stage as the herb garden begins to flourish.

I was introduced to Vietnamese food by my husband. We met soon after his return from Vietnam, where he’d served as a military policeman. He had been enrolled as an anthropology student at the University of Pittsburgh when he was drafted during his first semester in graduate school.

While in Vietnam, my husband took advantage of every opportunity to learn about the culture. He visited the Montagnard, the indigenous people of the Central Highlands of Vietnam. He sampled unusual dishes prepared by Vietnamese locals and his Korean counterparts.

In the ’90s, my husband returned to Vietnam and Laos to head MIA recovery missions as the head archaeologist on the crews. During those visits, he was able to explore and learn more about local cuisines, expanding his cooking repertoire.

When my husband returned from his missions, we met and hosted a Vietnamese couple who were graduate students at Marshall University. They were thrilled that we liked Vietnamese cooking, and we learned even more about that country’s food. We often cooked together and shared meals with friends.

Vietnamese food makes extensive use of herbs, spices and aromatics, and freshness is crucial. I grow most of the fresh herbs needed in Vietnamese recipes.

Cilantro is used in spring rolls, salads and soups. Mint and basil are used in pho and herb plates. Lemongrass is used in sweet and savory dishes. Scallions and shallots impart delicate onion flavors. Dill is an essential ingredient in a fish dish called Cha Ca.

Like other Asian cuisines, Vietnamese cooking has that yin and yang. It is a blend of sweet and salty, cool and warming, fresh and fermented.

The food in northern Vietnam is influenced by China and stir-fries and noodle soups are common. Soy sauce is a preferred seasoning. Food in the central part of the country has a stronger concentration of flavors and is spicier than what is found in the northern and southern areas. Shrimp paste is a common ingredient in dishes from this region.

In the south, one can see the influence of Thai and Cambodian cuisine, where food is sweeter and hotter. The southern climate sustains more rice paddies, coconut groves and herb gardens.

The saltiness in Vietnamese cooking generally comes from fermented fish sauce or nuoc mam. Many dishes are served with nuoc cham made with fish sauce, lime juice, sugar, chilies and garlic.

The use of fresh vegetables and herbs in Vietnamese cooking makes it one of the healthiest cuisines in the world. Herbs are used generously, not just sprinkled on dishes as a garnish.

If you enjoy growing and cooking with fresh herbs, you may want to consider adding some of the herbs that make Vietnamese cooking so delicious. They will add a pop of color and texture to your garden and your food.

Susan Maslowski founded and operates the Mud River Pottery studio in Milton, where she has created utilitarian ware for nearly 40 years. She sells produce at the Putnam Farmers Market, serves on the board of the West Virginia Farmers Market Association and The Wild Ramp, and is an advocate for local foods and farmers. She also writes the Farmer’s Table cooking column for the Gazette-Mail’s Metro section. Susan can be reached by email at mudriverpottery@aol.com.

Note: This salad can be made with grilled shiitake mushrooms and/or marinated pork.

Whisk all ingredients together in a bowl, making sure sugar gets dissolved. (This sauce can be made in advance and kept in the refrigerator for up to a week.)

Three or four hours before serving, mix the ingredients for the pork marinade. Place pork in a container and pour marinade over top. Place meat in refrigerator until ready to grill.

To prepare the salad:

Bring a medium pot of water to a rolling boil. Add some salt and then the noodles. Turn off the heat and let set for 8 to 12 minutes, stirring from time to time. You want noodles to be al dente. Drain in a colander and run cold water over them to stop cooking. Set aside at room temperature.

In a shallow bowl, whisk together all the Shiitake Seasoning ingredients. Add cleaned shiitake to the mix. Using your hands or a brush, make sure the mushrooms are covered with the seasoning.

The shiitake can be broiled for about 4 minutes on each side or they can be grilled over a medium-hot fire until caramelized on both sides. (I’d recommend grilling.)

Remove pork from marinade and place on grill. Cooking will go quickly and will probably only take a few minutes on each side. You will see the marinade caramelize on the outside.

To make the garnish:

Heat oil in a small pan. Add shallots and fry until lightly browned. Remove with a slotted spoon and drain on paper towels. Reserve at room temperature until ready to serve.

Place lettuce in the bottom of serving bowls. Top with noodles, and any of the other fixings, as desired. Top with warm mushrooms and/or grilled pork. Serve with nuoc cham sauce, which should be applied liberally.