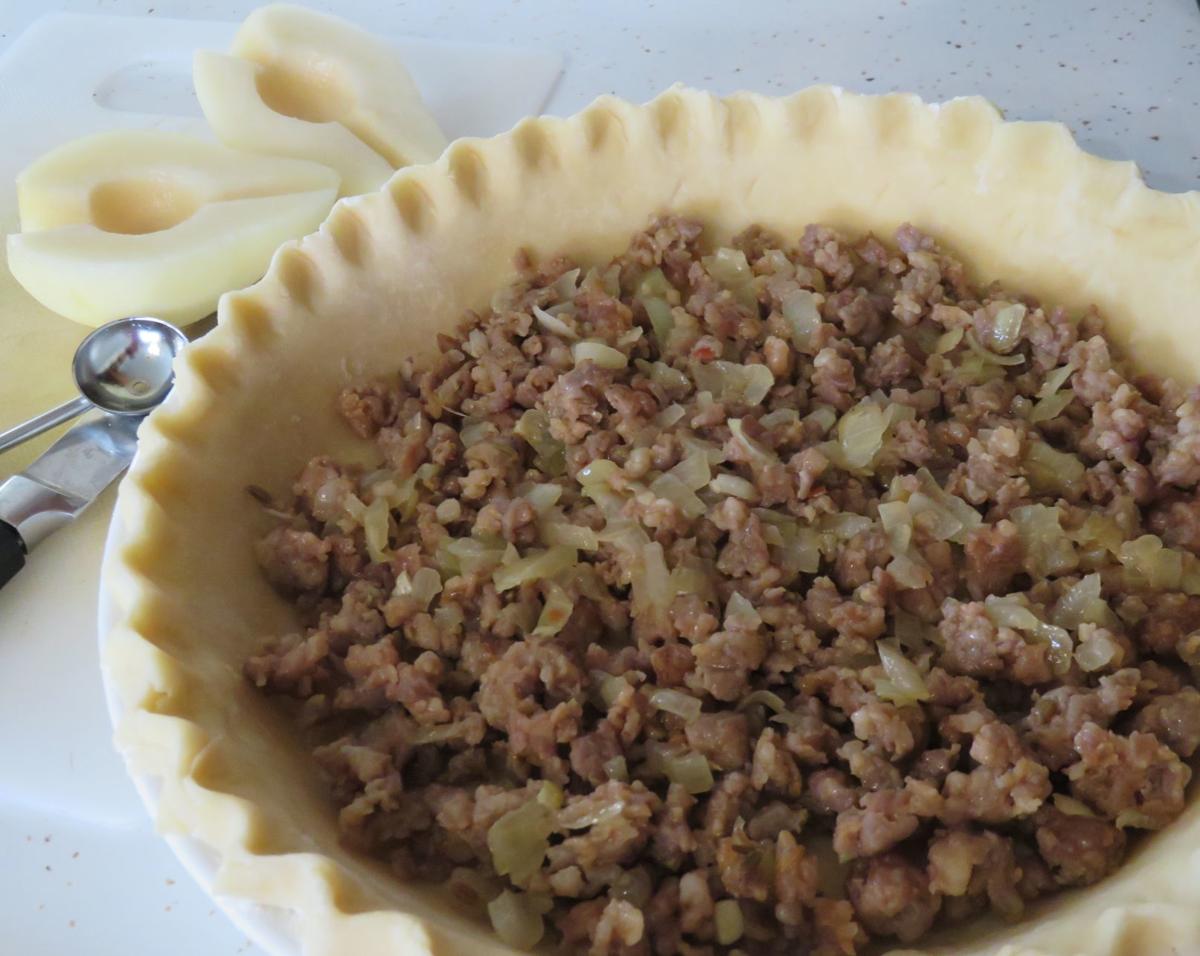 Step 1 in the creating the Pear-Pecan Sausage Quiche is lining a pie pan with pastry and filling it with cooked sausage and onion. 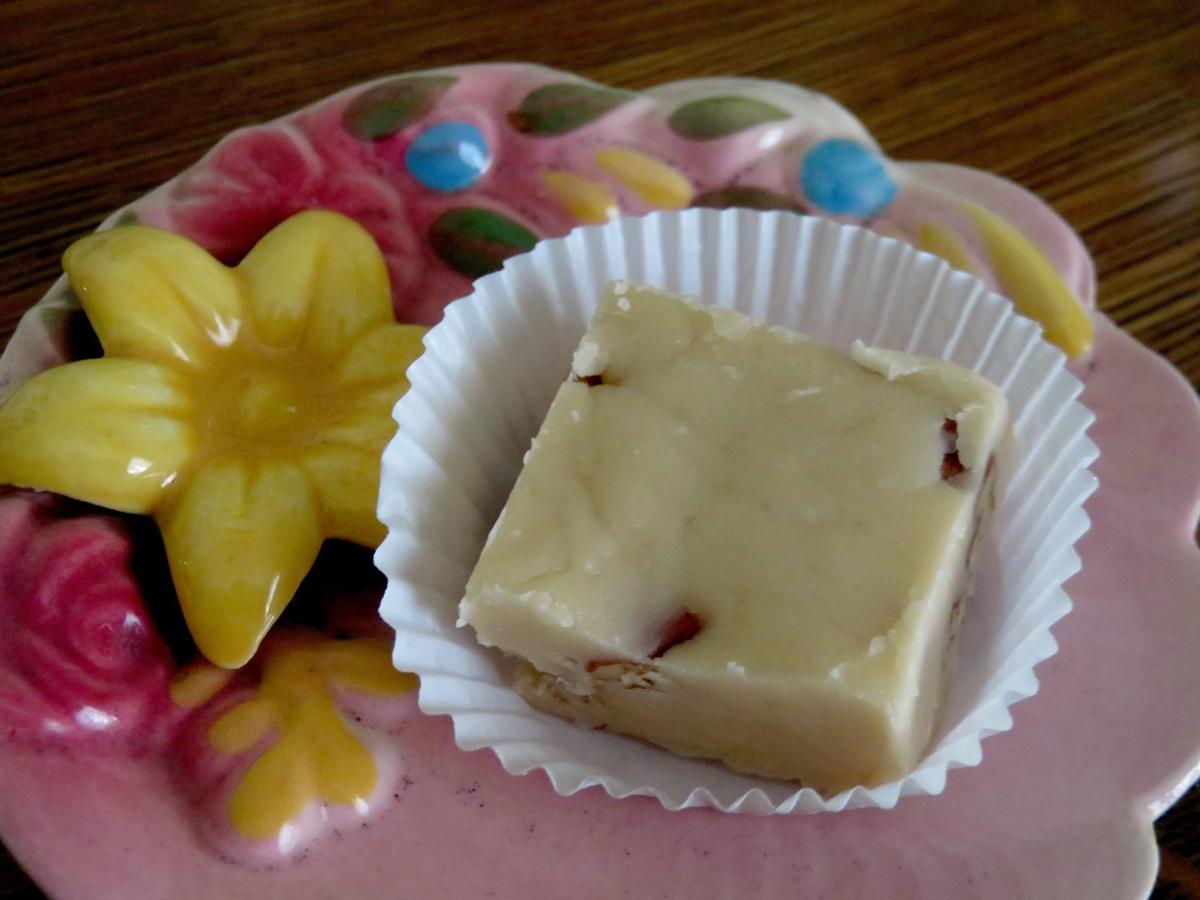 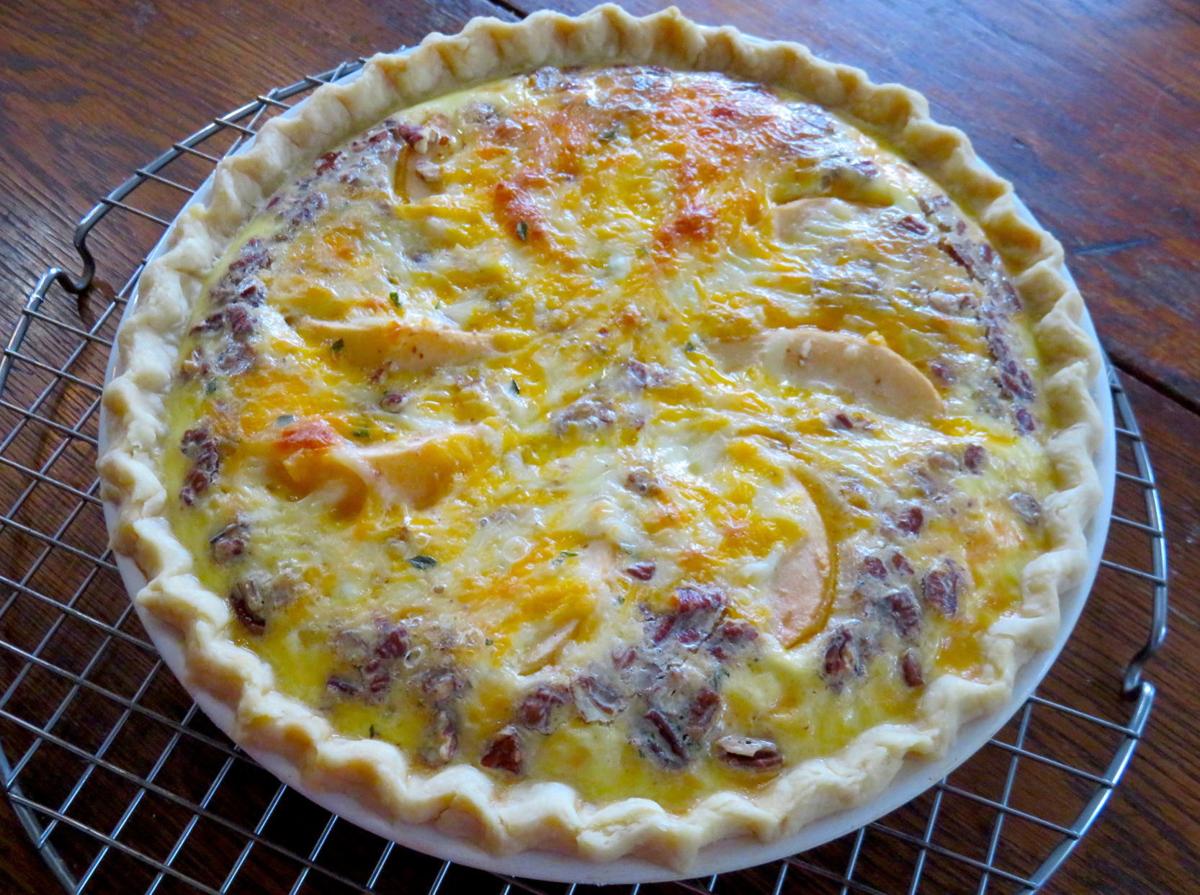 The final, most difficult step: letting the Pear-Pecan Sausage Quiche cool before digging in. 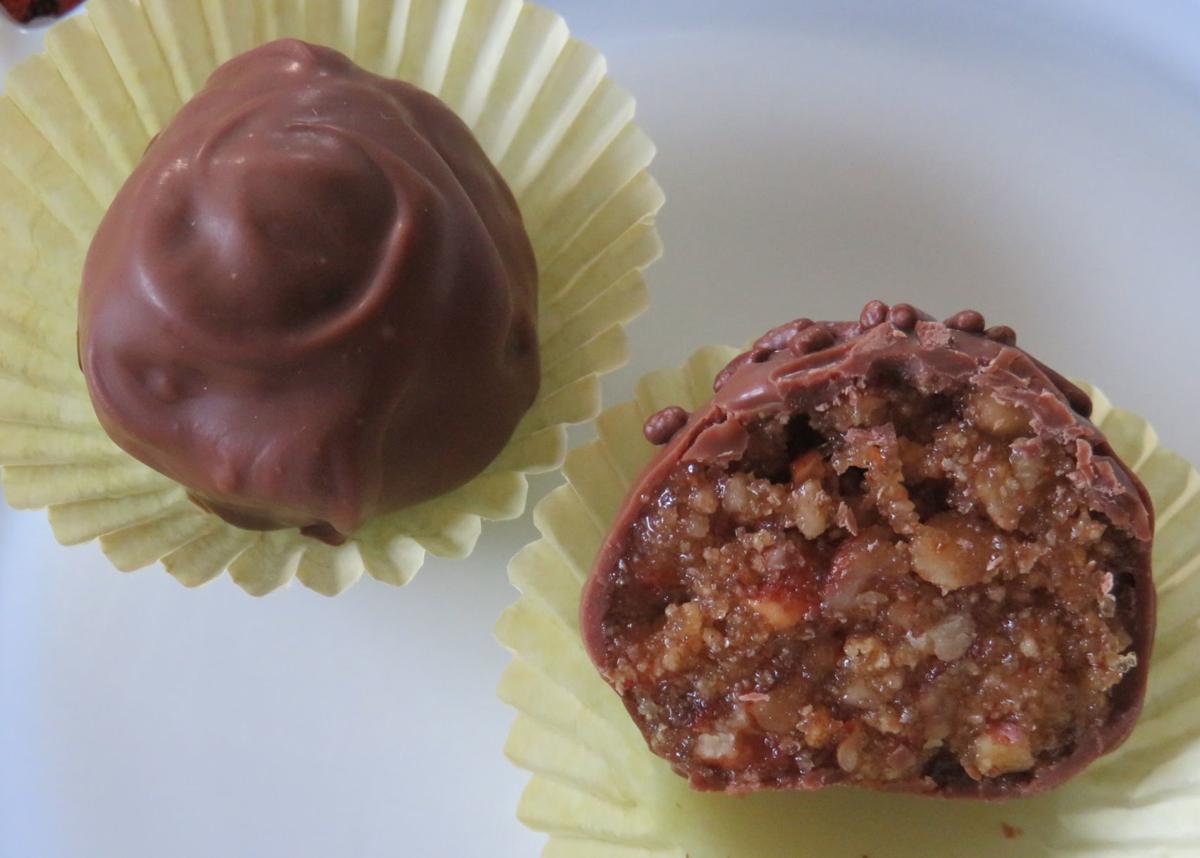 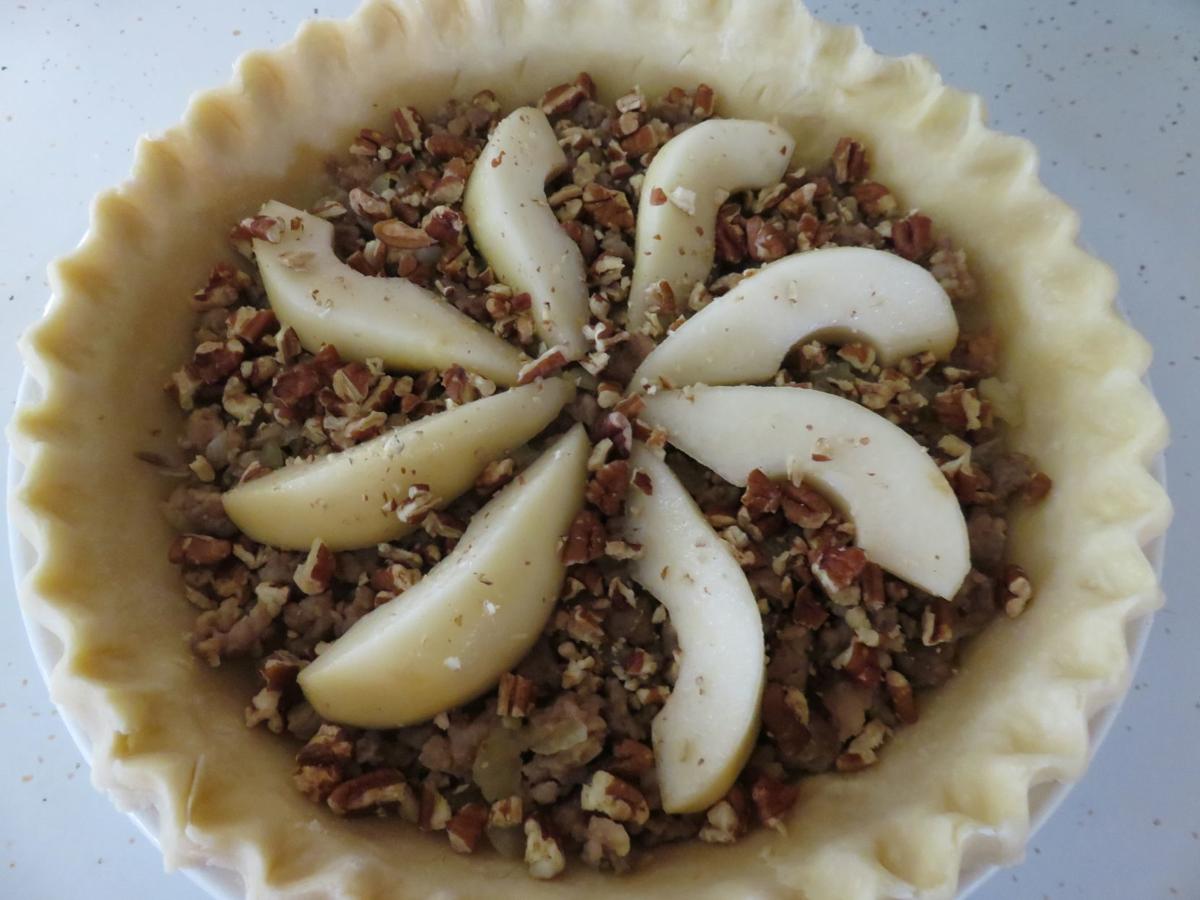 Step 2 is arranging the pear slices inside the quiche.

Step 1 in the creating the Pear-Pecan Sausage Quiche is lining a pie pan with pastry and filling it with cooked sausage and onion.

The final, most difficult step: letting the Pear-Pecan Sausage Quiche cool before digging in.

Step 2 is arranging the pear slices inside the quiche.

Georgia is known as the pecan state, but pecan trees grow in West Virginia, too. My father-in-law grew pecan trees on his city lot in Weirton. It was always a treat when he shared his bounty with us, especially during this time of year with holidays fast approaching.

Pecans are native to North America. They are members of the hickory genus and are not truly nuts. Technically, they are drupes, a fruit with a single pit surrounded by a husk. They have a buttery flavor and high nutritional content. The name “pecan” comes from the Native American (Algonquin) word “pacane” describing “nuts requiring a stone to crack.”

Natives who lived in the pre-colonial southeastern regions of North America used pecans as a major food source. They were even used as currency among some tribes. There were others who used pecans to make a fermented drink called “powcohicora,” from which the word “hickory” is derived.

Reliance on pecans for nutrition and trade led to pecan tree cultivation. When American colonists started using pecans in commerce in the 1700s and early 1800s, they, too, began to plant pecan orchards.

French Americans in Louisiana were making pralines with pecans during the 18th century. Original praline recipes called for almonds or hazelnuts, but settlers had to resort to using what they had, so they substituted native pecans. Pralines sold in the U.S. today are typically made with pecans.

By the late 1700s, the pecan’s popularity expanded along the Atlantic Seaboard. The first commercial pecan planting in the United States was in 1772 in Long Island, New York. George Washington and Thomas Jefferson grew pecans.

In 1822, Abner Landrum discovered a grafting technique that produced pecans that were consistently larger in size, had nice shape and shell characteristics, and were superb in flavor. Landrum’s discovery was not widely known until a former African-American slave named Antoine successfully grafted an outstanding wild pecan to seedling stock.

Antoine’s clone won the Best Pecan Exhibited award at the Philadelphia Centennial Exposition in 1856. His grafting technique led to the production of improved pecan varieties that were of consistent quality.

Pecans were not always used as extensively as they are today. The USDA promoted the use of pecans as a replacement for meat during WWII, since meat was largely reserved for men in uniform. Nuts were promoted as good sources of protein, and meatless meals were encouraged. The Chicago Daily Tribune published a savory pecan loaf recipe as a meat substitute.

While I do not have the original recipe, instructions for making pecan loaves are still available. In addition to pecans, they often include ingredients like rice, cracker crumbs, milk, salt, butter and eggs. The ingredients are combined and baked in a bread pan.

To encourage more consumption, the government placed a price ceiling on pecans and other nuts. Pecan growers complained that declining prices hurt their business, and, eventually, the government agreed to buy surplus pecans.

By 1952, federal coffers had more than three million pounds of excess nuts, which they gave to schools throughout the country. School cafeteria managers had to come up with creative ways to use pecans. One Chicago school superintendent said it was a challenge to find ways to feed 800 pounds of pecans to 1,300 elementary students.

This federal program of supplying schools with surplus pecans led pecan orchardists to increase production to earn extra money on the margins — a practice we see in industrial agriculture today. With increased production and greater federal purchases, consumption had to be encouraged.

Americans who were familiar with pecans usually ate them raw as a snack. The surplus the government agreed to buy from the producers meant that even more new ways had to be found to use pecans. Cookbook writers, newspaper food columnists and chefs were encouraged to create new ways to use pecans. Naturally, the flavor and texture of pecans work nicely in desserts.

The government got into the act by sending Pecan Caramel Rolls in overseas care packages to American GIs. Those men and women remembered these treats, and Pecan Caramel Rolls soon became a hit stateside. The USDA called pecans a “Victory Food Special,” and encouraged Americans to consume them as an expression of postwar national pride.

The first pecan pie recipes emerged in the ’30s with the invention of Karo Corn Syrup, but pecan pie wasn’t popularized until the 1940s and ’50s. By the 1950s, most Americans had heard of or tasted pecan pie, and it became the iconic dessert served at Thanksgiving meals. Pecans are associated with Thanksgiving and Christmas, largely due to pecans being harvested in the fall.

By the 1950s, the relentless surplus of pecans was being used in all sorts of innovative culinary creations. There were pecan pies, pecan rolls, pecan puddings and more. Pecans were tossed into savory and sweet salads. They were added to asparagus dishes and chicken roulades. Spiced and candied pecans became a party food.

Pecans have come a long way since their “wild” days. There are more than 1,000 varieties and many are named for Native American tribes like Cheyenne, Choctaw, Mohawk, Shawnee and Sioux.

Besides adding a delicious, crunchy texture and buttery flavor to your holiday dishes, pecans are nutrition in a nutshell and rank among the top 15 foods determined by the USDA with the highest levels of antioxidants. They are a powerhouse of vitamins and minerals, too.

Whether you call them “pee-cans” or “peh-kahns,” remember that pecans are not just for pecan pie. They are a great tasting snack and a versatile ingredient in many recipes.

Susan Maslowski founded and operates Mud River Pottery studio in Milton, where she has created utilitarian ware for nearly 40 years. She sells produce and serves on the board of The Wild Ramp, and is an advocate for local foods and farmers. She also writes the Farmer’s Table cooking column for the Gazette-Mail’s Metro section. Susan can be reached by email at mudriverpottery@aol.com.

Refrigerate mixture for at least 15 minutes.

Roll mixture into 1-inch balls and place on a parchment-lined cookie sheet. (I found I needed to add a little extra corn syrup so mixture would stay together. You do not want the balls to be crumbly or they will fall apart in the chocolate.) Refrigerate for at least 30 minutes.

Melt chocolate according to directions. Coat truffles with chocolate and return to parchment-lined cookie sheet. Allow chocolate to harden. Enjoy!

Preheat the oven to 350 degrees.

Sprinkle the pecans on a cookie sheet and bake in the preheated oven for 5-10 minutes. When they're done, you will be able to smell a delicious nutty aroma.

Line an 8x8 inch pan with parchment, or line with aluminum foil and grease with butter.

Add the butter, brown sugar, white sugar and whipping cream to a medium saucepan. If using a candy thermometer, clip it to the side of the bowl.

Melt the ingredients together over medium-low heat.

Once the butter is melted, bring the mixture to a boil. Boil for 5 minutes without stirring, or until the candy thermometer reads 235F degrees.

Remove from the heat and cool for 10 minutes.

Stir in the salt and vanilla extract.

Stir in the sifted powdered sugar, then fold in the toasted pecans.

Spoon the batter into the lined pan and let set for 2 hours.

Cut into small squares with a sharp knife.

Store in an airtight container at room temperature. To freeze fudge, wrap tightly and freeze for up to 2 months. Thaw in the fridge.

In a large skillet, cook sausage and onion over medium heat until meat is no longer pink. Drain. Put sausage in the crust. Arrange pear wedges on top. Sprinkle with pecans.

In a large bowl, whisk eggs, cream, salt, thyme and nutmeg. Stir in cheese. Pour over sausage and pears.

Bake in pre-heated oven for 45 minutes or until knife inserted in center comes out clean. Cover the crust with foil, if it appears to be getting too brown. Let stand 5 minutes before slicing.