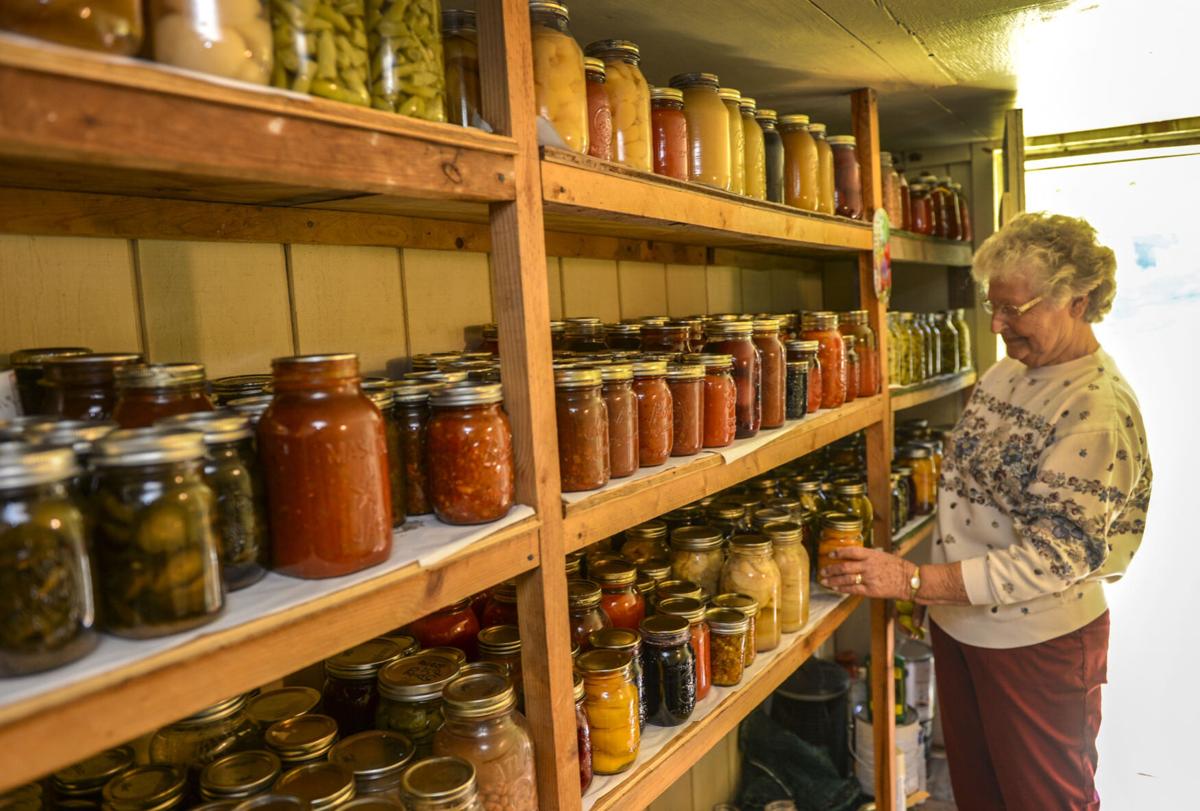 Betty Workman stands in her root cellar at her home. 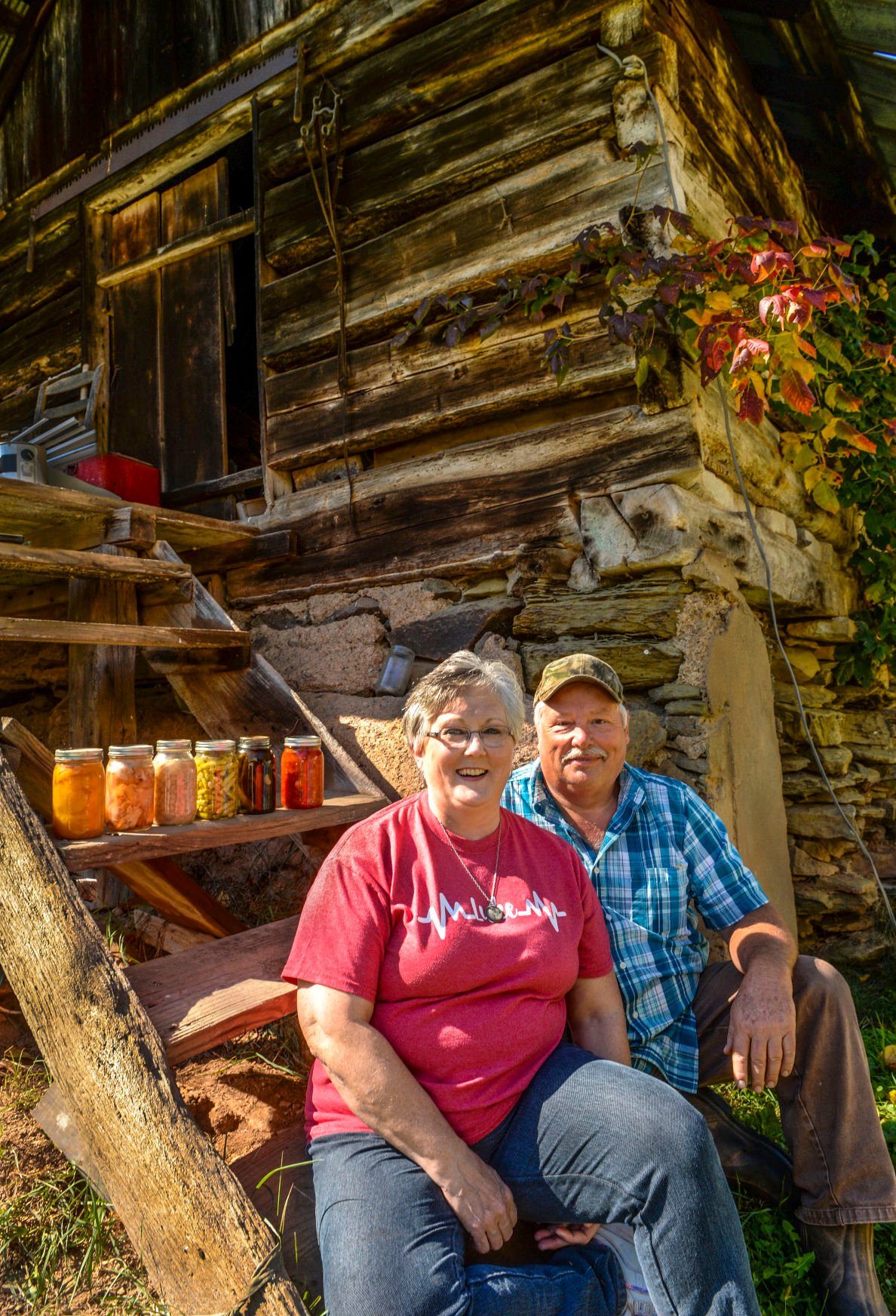 Paula and Jim Workman sit on the steps of their root cellar with some recently canned items from their garden. 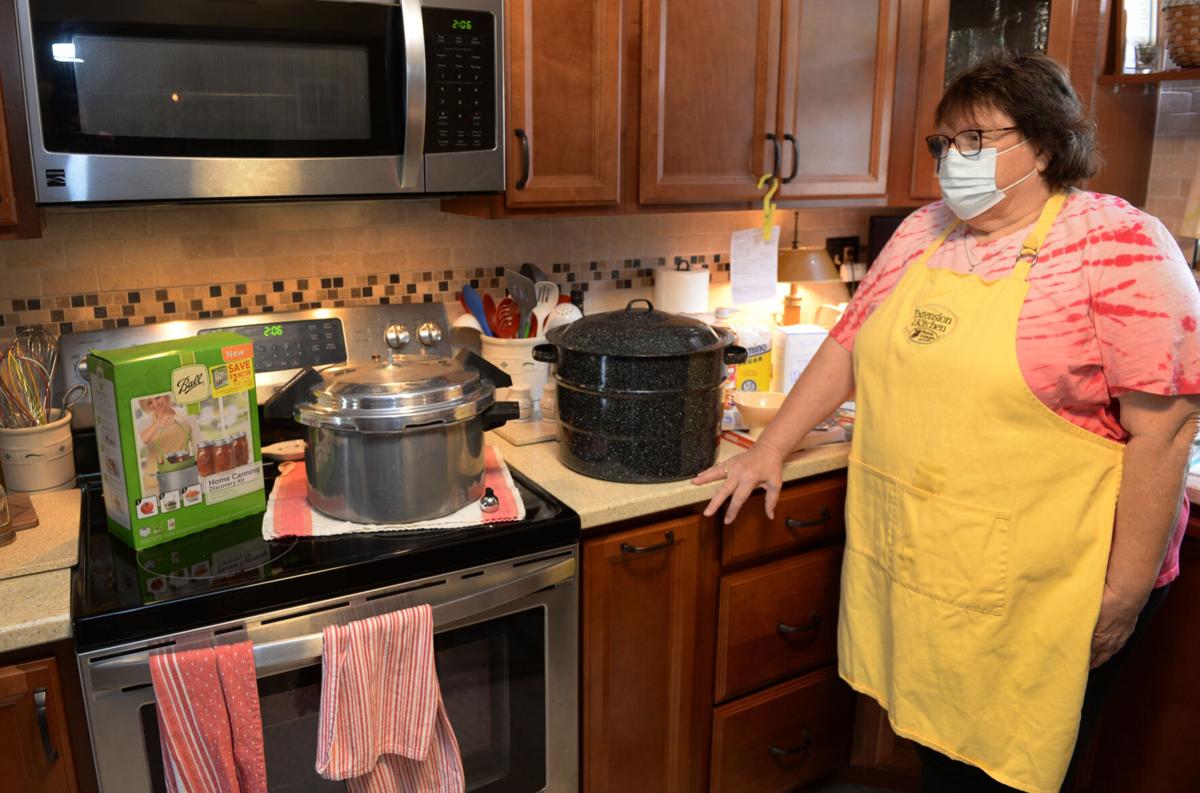 Bonnie Dunn in her kitchen with canning items. Bonnie Dunn cuts up a butternut squash for freezing. 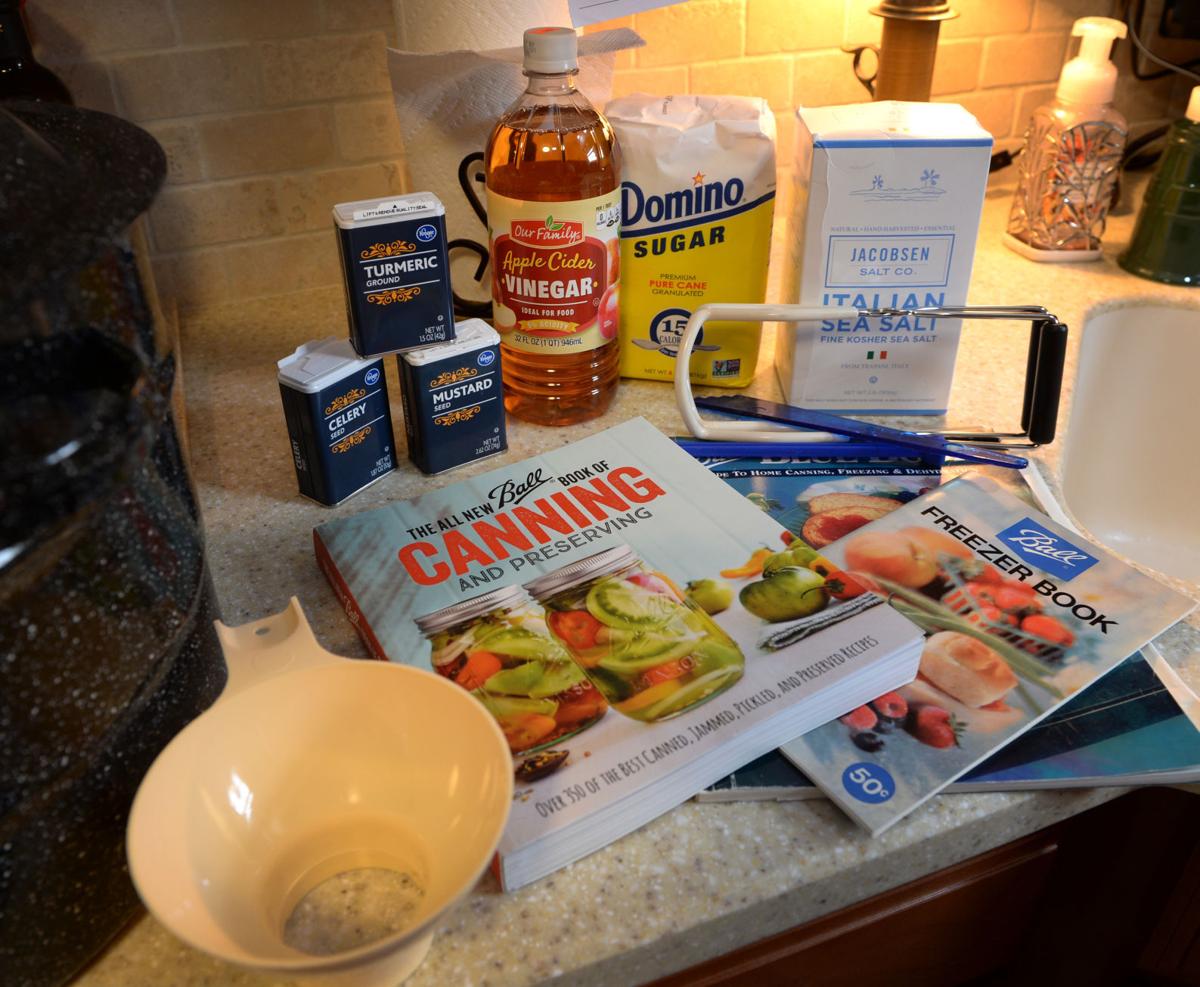 Paula Workman shows off her canning ability with a fully stocked root cellar at her home in Spencer. Paula Workman holds a jar of string beans she and her husband, Jim, canned this fall from their garden. 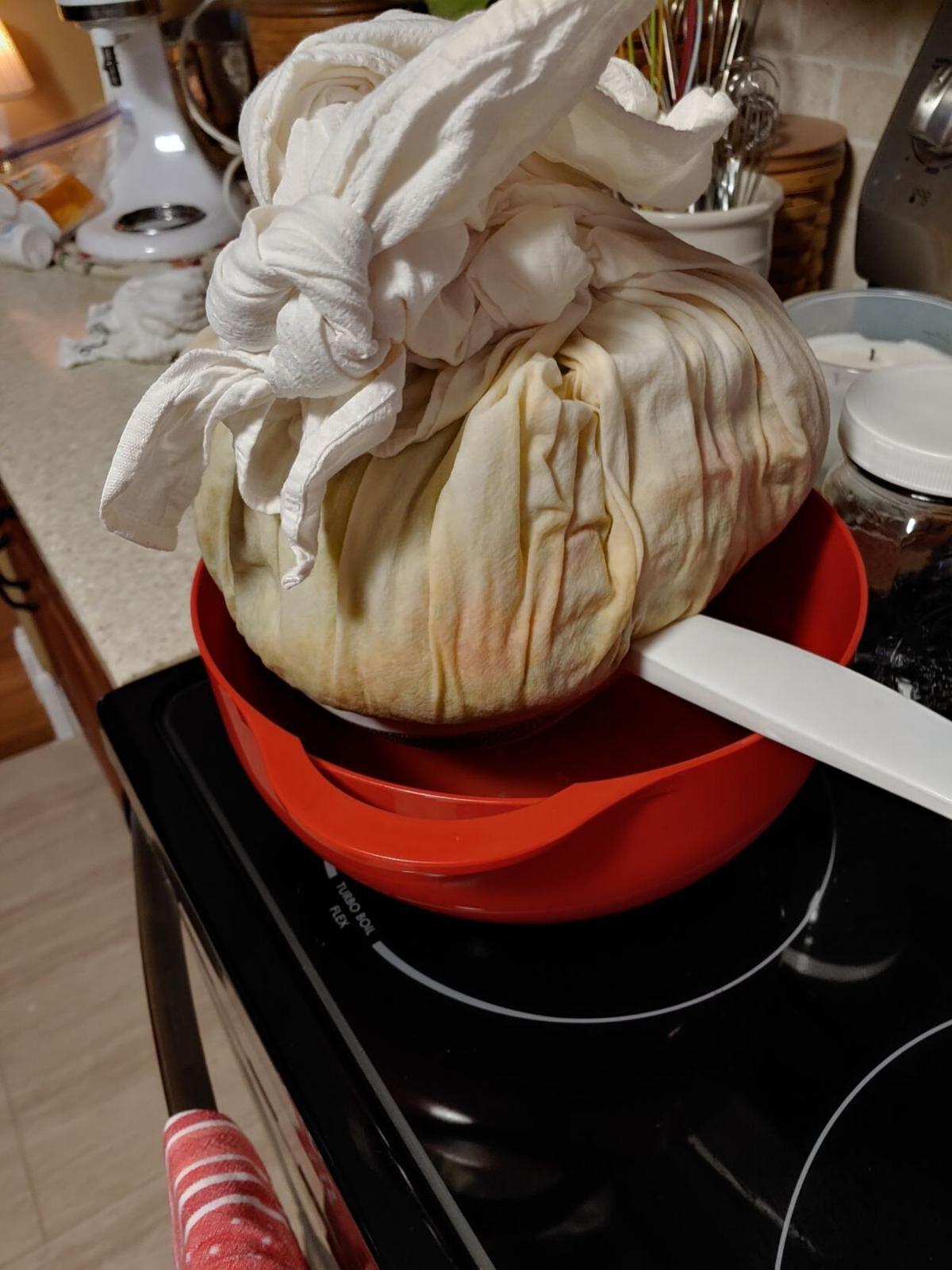 Vegetables have a lot of water in them, so when making chow chow they need to drain for at least eight hours in a clean bag such as a pillowcase. 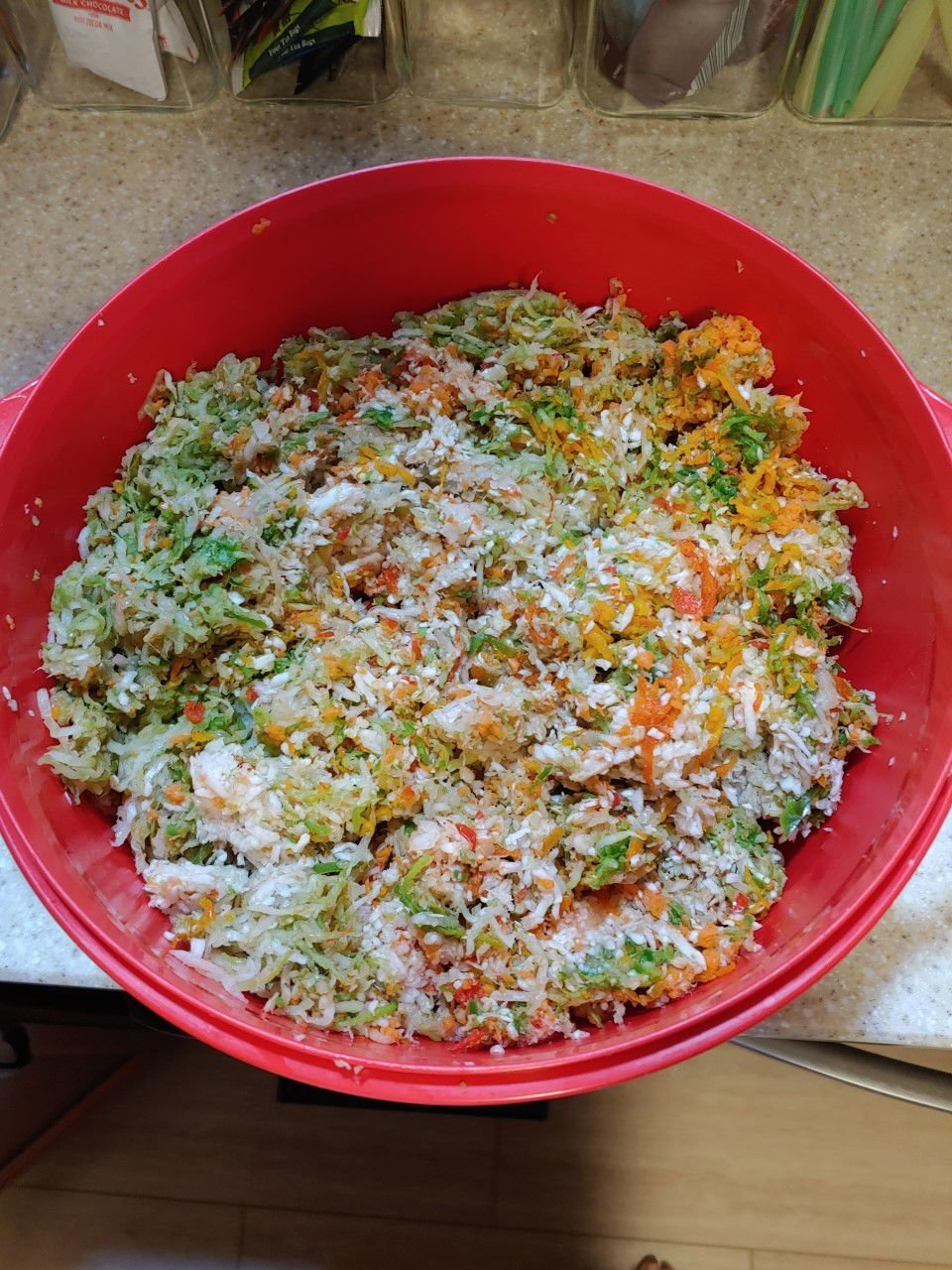 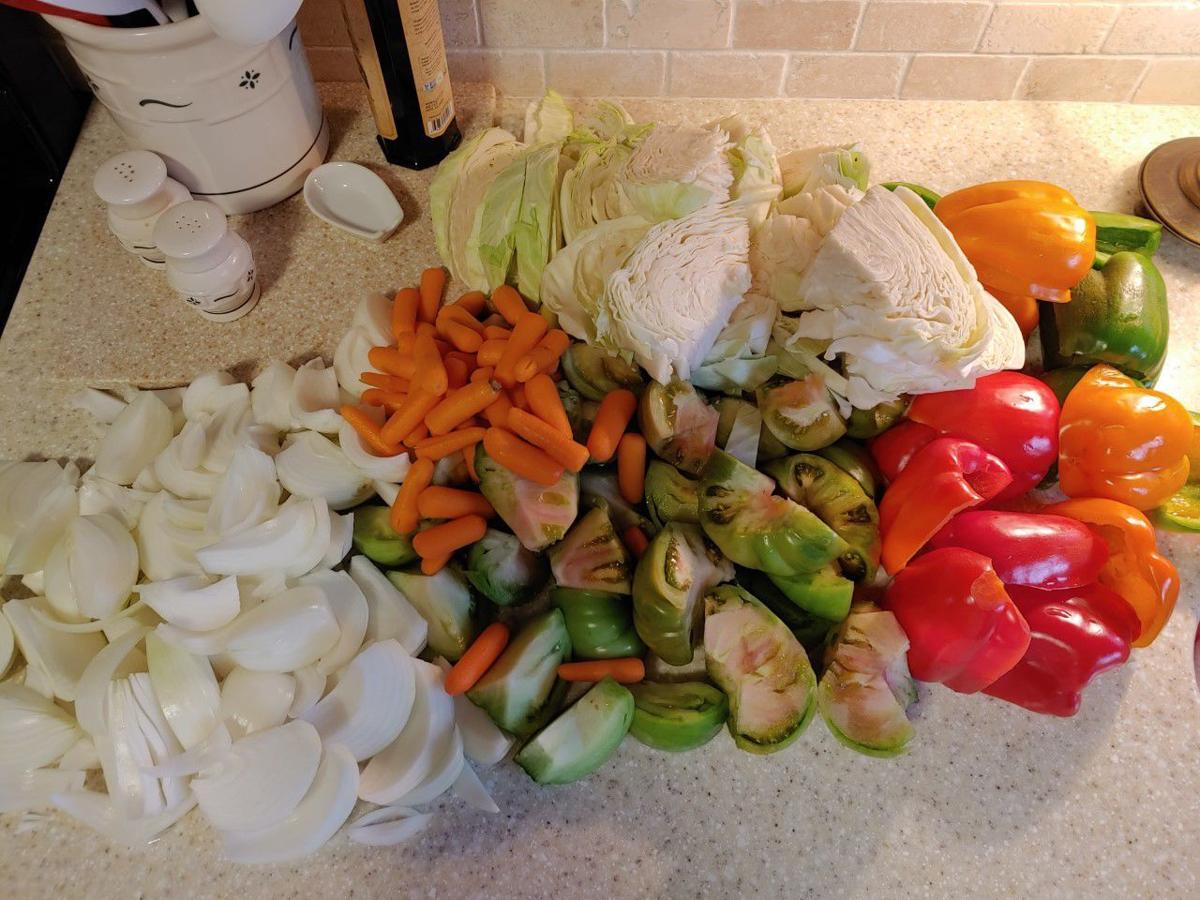 “[Chow chow is made of] anything still growing right before the first frost,” said Bonnie Dunn, an extension specialist with West Virginia State University. “Throw the kitchen sink at it.”

Betty Workman stands in her root cellar at her home.

Paula and Jim Workman sit on the steps of their root cellar with some recently canned items from their garden.

Bonnie Dunn in her kitchen with canning items.

Bonnie Dunn cuts up a butternut squash for freezing.

Paula Workman shows off her canning ability with a fully stocked root cellar at her home in Spencer.

Paula Workman holds a jar of string beans she and her husband, Jim, canned this fall from their garden.

Vegetables have a lot of water in them, so when making chow chow they need to drain for at least eight hours in a clean bag such as a pillowcase.

“[Chow chow is made of] anything still growing right before the first frost,” said Bonnie Dunn, an extension specialist with West Virginia State University. “Throw the kitchen sink at it.”

SPENCER — Stepping into Jim and Paula Workman’s century-old cellar is like cruising the aisles of a small but well-stocked grocery store from back in the day, before mass-produced, generic cans from hundreds or thousands of miles away crowded the shelves.

“These are green beans. This is salsa, peaches, this is apple butter, this is peach jelly,” Paula said, pointing to row after row of clear glass jars filled with the bounty of a summer garden.

Even in the dim light, the brightly colored fruits and vegetables stand out like a rainbow of seasonal flavors.

She held up a family favorite.

“And this is our hot peppers with the hot dogs — they eat that with everything,” she said.

Just up a winding, gravel road through the woods, her mother-in-law’s storage shed is much the same — with applesauce, spaghetti sauce, salsa, tomatoes — enough to feed a small army through the winter.

“I love to can. I enjoy it. I don’t even count it as work,” Betty Workman said.

Both women have been growing and canning food for their families all of their adult lives — as have the generations that came before them.

But this year, they’ve had some competition.

“Seed was impossible to find, if you didn’t get it really, really early,” said Jim Workman, Paula’s husband, just in from mowing a couple of fields for hay for the cattle.

His mother, Betty, had so much trouble finding the seeds she wanted that she turned to heirloom supplies she had on hand.

“We filled the garden with what we had. That’s why we had more pole beans — we had pole bean seeds,” she said.

Just in case, she bought her canning supplies long before she needed them.

“I figured it would be a shortage, so the lids and all — I bought ‘em early. ... I felt like everybody was putting out a garden,” she added.

This family of farmers sees a clear connection between a lack of the supplies they normally get and the COVID-19 pandemic — prompted, perhaps, by a fearful public reaction to the empty shelves at big box stores.

“When people started hoarding up stuff, everyone was like, ‘Oh my goodness. What’s gonna happen?’ And decided that they needed to take care of their own and raise a garden,” Paula said.

“There’s been times there was no meat in the meat counter, and I think people just got fearful and [said,] ‘I’ve gotta get stuff to feed my family, and if I have to raise it and can it that’s what I’ll do to take care of them,’” she said.

Pile Hardware in Charleston hasn’t had canning supplies “for a while now,” owner Bill Pile said.

“Well, there’s a pandemic going on, started in February, and people sat home and decided they were gonna garden and can and no one told us that’s why there’s a shortage but over the last few months we’ve pretty much figured it out,” he added.

Most of the evidence is anecdotal, but Bonnie Dunn, an extension specialist with West Virginia State University said she “absolutely” sees a connection, too.

“I have been at this for 50 years, and I have never seen such a resurgence of food preservation in all my life,” she said. “The questions I’ve been asked, people saying, ‘Teach me how to do this.’”

It dates back to the shortages earlier this year, she said.

“You couldn’t find anything. Nothing,” she said. “Being a home economist, I was appalled at the grocery store, at what wasn’t there.”

“It’s anything still growing right before the first frost. You know, green tomatoes, it has cabbage in it, bell peppers, onions — cause towards the end of the garden you will still have those kinds of things...Throw the kitchen sink at it,” she said.

She loved it as a child, growing up in Rand, but could never figure out why a neighbor lady gave her just a pint every year.

“Well, now I know,” she laughed. “This is hard to make. It’s time consuming.”

Just grinding the vegetables, she said, is about a four-hour process. Old timers would use a grinder that attached to a bench. A food processor is much faster, but the end result isn’t nearly as fine.

The old recipe she has called for a clean pillow case — she used two large, flour sack dish towels suspended over a couple of giant bowls.

“There’s lots of water in vegetables, and the purpose of this is to get the water out. ... I had two of them going all night long. I know I got over a gallon of liquid,” she said.

A former home economics teacher, Dunn is full of the kind of knowledge you won’t find in most cookbooks: don’t squeeze the dish towels to get the water out; use enamel cookware or stainless steel rather than aluminum; after you create your pickling juices and fill your jars, do a water bath for 10 minutes, per the U.S. Department of Agriculture; and afterward, whatever you do, put those hot jars on a towel to buffer them from the cool surface of your counter — unless you want all those jars to shatter.

Then, she said, listen to be sure they are sealed and cooled.

If you’re freezing your produce, rather than canning it, she said, use a straw to suction all the air out. And washing your vegetables, your counters, utensils and hands is critical, but the heating and cooking process kills off the harmful bacteria.

“Botulism is a fear, of course, if you don’t know what you’re doing. But I always pull out my canning books cause from one year to the next, sometimes you forget,” said Paula Workman.

She prefers a pressure cooker over a water bath.

And she, too, is full of tricks and tips acquired over a lifetime. Like her 14-day sweet pickles.

“You use enough salt to float an egg,” she said.

But you don’t slice those cucumbers, not right away.

“You put em in the crock and every day you do something different to them and then you can ‘em up,” she said.

Both women said they were not surprised at the resurgence in canning and preserving food — but they were surprised it took a pandemic to bring it about.

There’s a certain satisfaction, they said, in knowing exactly what’s gone into the food you’re eating. In knowing there aren’t a lot of additives and preservatives.

And then there’s the matter of flavor.

“When you open a jar of beans in January,” said Paula, “It just tastes like you just picked it up out of the garden.”

Recipe from and in memory of Mrs. Pauline Meadows of Rand. You can add other preferred vegetables  than the ones listed, such as celery and cauliflower. When in doubt about canning, always consult the USDA Food Preservation website at nifa.usda.gov/press-release/usdas-complete-guide-home-canning-available. Makes about 16 1-pint jars.

Place all ingredients into a clean pillow case. Tie string or twine around it and hang over a bucket or large bowl overnight or for a minimum of 8 hours (these vegetable have a lot of water in them).

Place the remaining ingredients in a large stock pot and bring it to a boil. Add the ground vegetables and cook for 30 minutes, stirring frequently.

Wash and rinse pint-size jars, place rings (bands) and lid in boiling hot water. Ladle hot mixture into jars using a funnel. Place lids and rings on each jar and tighten the ring. Leave jars on a dish towel until sealed and cooled.

Other vegetables can be added. Cut all of the pieces the same size.

Place squash on a sheet pan and drizzle with olive oil, salt and pepper and toss well. Arrange squash in one layer and roast for 25 to 30 minutes, until the squash is tender, turning once with a metal spatula.

1/4 teaspoon salt or more to taste

salty – add your favorite salt, such as garlic salt or onion salt

other - create your own

Toss seeds with oil and desired seasonings in a small bowl. Make sure to get all seeds evenly coated.

Spread seeds in single layer on a parchment-lined baking sheet,

Bake for 15-20 minutes, until seeds turn golden. Stir once or twice during cooking.

Cool on baking sheet. Add more salt or seasonings to taste and serve.

Submerge cucumbers in salted water (just enough salt to float an egg). Cover with a plate or other weighted item to keep them under the water for seven days.

On the ninth day, pour off brine and slice cucumbers. Cover them with cold water. Add alum and horseradish.

On the tenth day, drain that off and cover them with hot boiling water.

On days 12 and 13, pour pickling juice off, heat it up and pour it back over the pickles.

On the 14th day, pour off pickling juice and heat it up. Pack pickles into jars. Just before juice begins to boil, remove it from heat and pour over pickles.