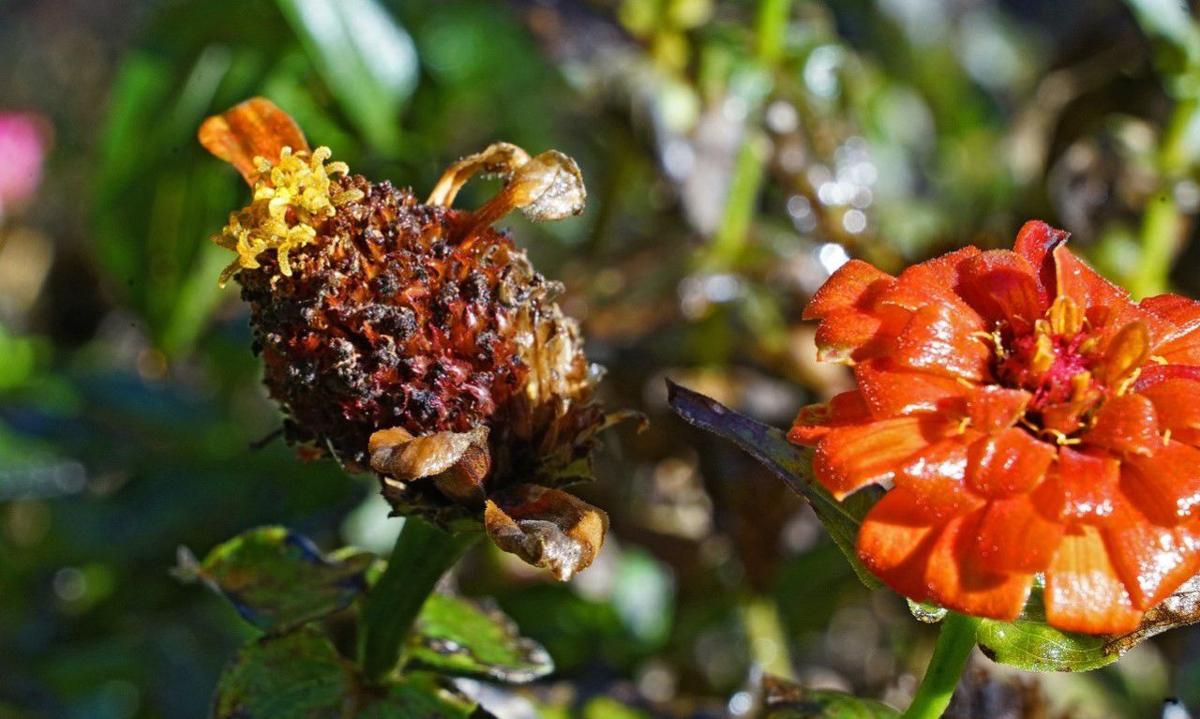 A colorful zinnia seed cluster, ready for picking and saving. 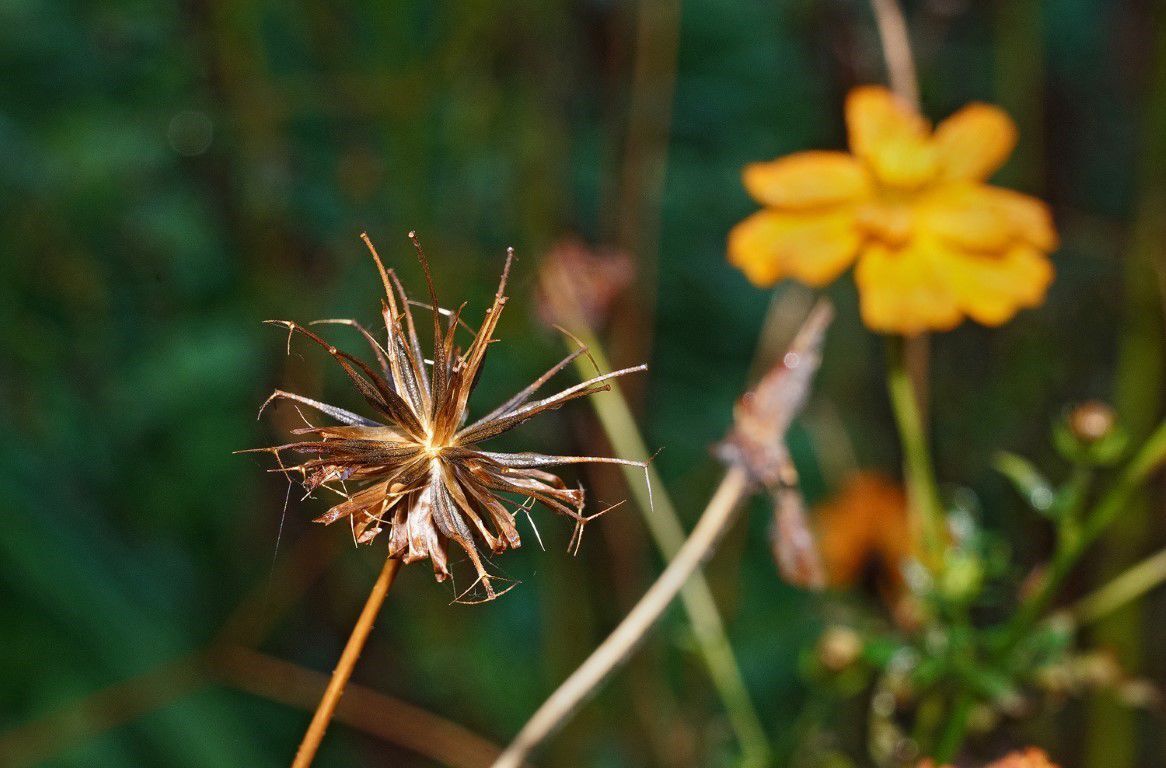 Wait! before you mow them down or let them freeze, consider saving these Cosmo seed spikes for next season. 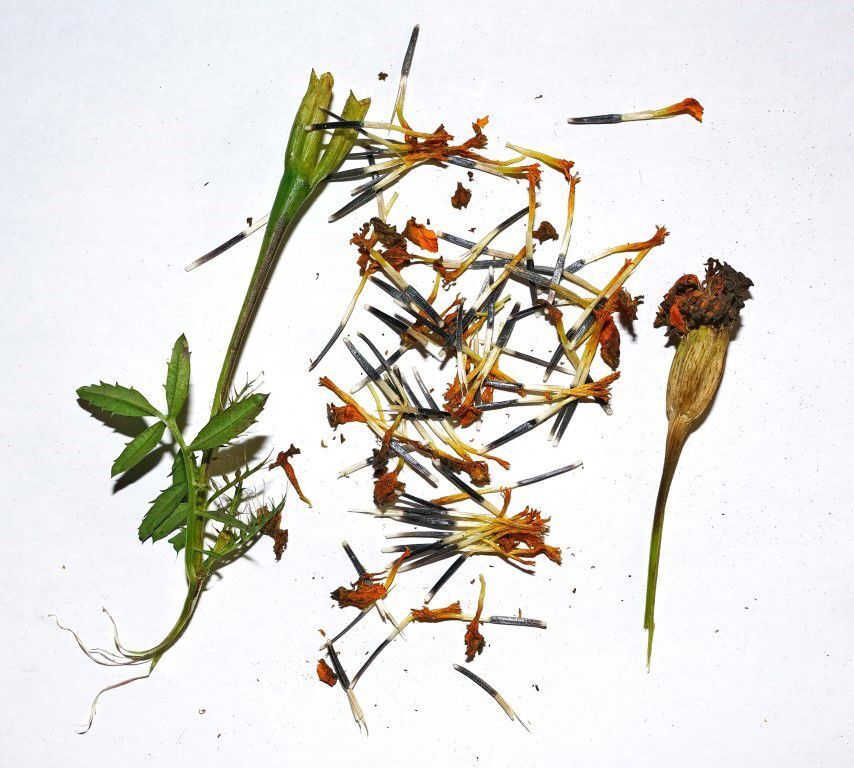 A colorful zinnia seed cluster, ready for picking and saving.

Wait! before you mow them down or let them freeze, consider saving these Cosmo seed spikes for next season.

The season is changing quickly. The color scheme of the forests seems at its peak, but the predicted frost some nights, together with some west wind, will sweep the leaves off the trees in a hurry. Make sure that any plants you move indoors for the winter are sprayed with a soap and water solution (about two to four tablespoons of dish soap to a quart of water), pyola, insecticidal soap, Neem oil or a pepper spray.

Pepper spray needs a little preparation. Chop about six to eight hot peppers finely. If you don't have fresh hot peppers, substitute with four tablespoons of powdered cayenne pepper. Add one tbsp of dish soap and one tbsp pf vegetable oil and soak the whole mixture for 24 hours in one gallon of water. Even if we can't detect bugs on the plants, they might be there in the egg stage, then hatch once they are indoors. It is better to be proactive and avoid their proliferation inside the house.

Another last minute chore involves collecting seeds from annual flowers. Considering the cost of seeds, it pays to at least collect the easiest varieties. I looked at some seed catalogs for prices to verify my savings claims. Various marigold seeds range from 100 seeds for $4, 40 seeds for $2 to 25 seeds for $4.50.

When I opened a marigold seed pod, there were around 40 seeds in it. That might give you an idea of possible savings. A farmer can be more successful with his business if he learns early on about healthy frugality. Not being able to learn this lesson, one might be forced to adapt it, if financial survival depends on it.

Marigolds, zinnias, cosmos, sunflowers, calendulas and sweet peas are very easy to gather. Collect seeds only in dry weather. I usually carry several small containers, a magic marker and some paper with me. It is important to write down the colors or types of the same annuals.

Cosmos can be orange, yellow, various variations of purple, double or single. Marigolds will form a tiny cone after blooming with a dried up brown cap on top. Pick one, open it and a bunch of seeds will spread in your open palm. Put all the small seed cones in the container and label them on the piece of paper.

Cosmos form a cluster of delicate spikes. Gently remove them from the stem. I sometimes place my container right under the seed cluster and brush them in. Zinnias make a tussle of dried flower petals and seeds on top of the stem. Remove the whole thing. It is often difficult to tell petals apart from the actual seeds. I have decided a long time ago to rub them between my hands after they dry completely in the house.

When I plant them in spring, I generously spread the petals/seed mixture in their row. When they germinate too closely together, I just thin them out. Sweet peas and sunflower seeds don't need a description. It is important to let the whole collection dry out completely in a dry room in the house, to put them afterwards into ziplock bags for storage in the freezer.

I never do a germination test with flower seeds. I find it too time consuming, but I gather ten fold more than I need and something surely will grow. The seeds will keep for years in the freezer, so if the next season something goes wrong, you still have plenty left, or you can offer them to a friend or neighbor.

The question is always when to prune various bushes and fruit trees. When we detect a diseased cane or branch during the growing season, we should remove the affected parts of the plant right away. We might be able to stop the spread of the disease to the whole plant or to neighboring ones.

If it is a fungal infection, it is advised to use an anti-fungal spray after pruning. The best time to prune shrubs and trees is in the dead of winter, when all signs of sprouting are impossible. Pruning stimulates growth and if we prune while the weather is still warm enough for even slow growth, we send a signal to the plant to put more energy into new spurts of growing.

When freezes kill these new sprouting canes, they die along with potential flower buds. I will write about major pruning when the time comes to do it, but here are a few pruning tasks we could do now.

When it comes to roses, it would be good to cut out all dead wood, but then wait till late February to finish the rest. The bushes will still be dormant and at this time, the winter damage from freezes will be clearly visible. There will be probably more dead wood, more partly damaged canes by frost.

Never prune spring bloomers like azaleas, rhododendrons and forsythias in fall -- never! Inspect these shrubs and you can clearly see the buds that will bear flowers in spring. Prune them after they bloom in spring, but not now.

Verana Sava and her husband, Greg, live on and work a farm nestled between Little Birch Mountain in Braxton County to the North and Powell's Mountain in Nicholas County to the South. They have raised goats and made cheese over the years, and today -- after more than four decades on their land -- still raise most of their own food. Greg takes the photos and Verana writes a newletter, "On the Other Side of the Mountain." They can be reached via email at gregverena@gmail.com.

An IRS Incentive To Save For Retirement