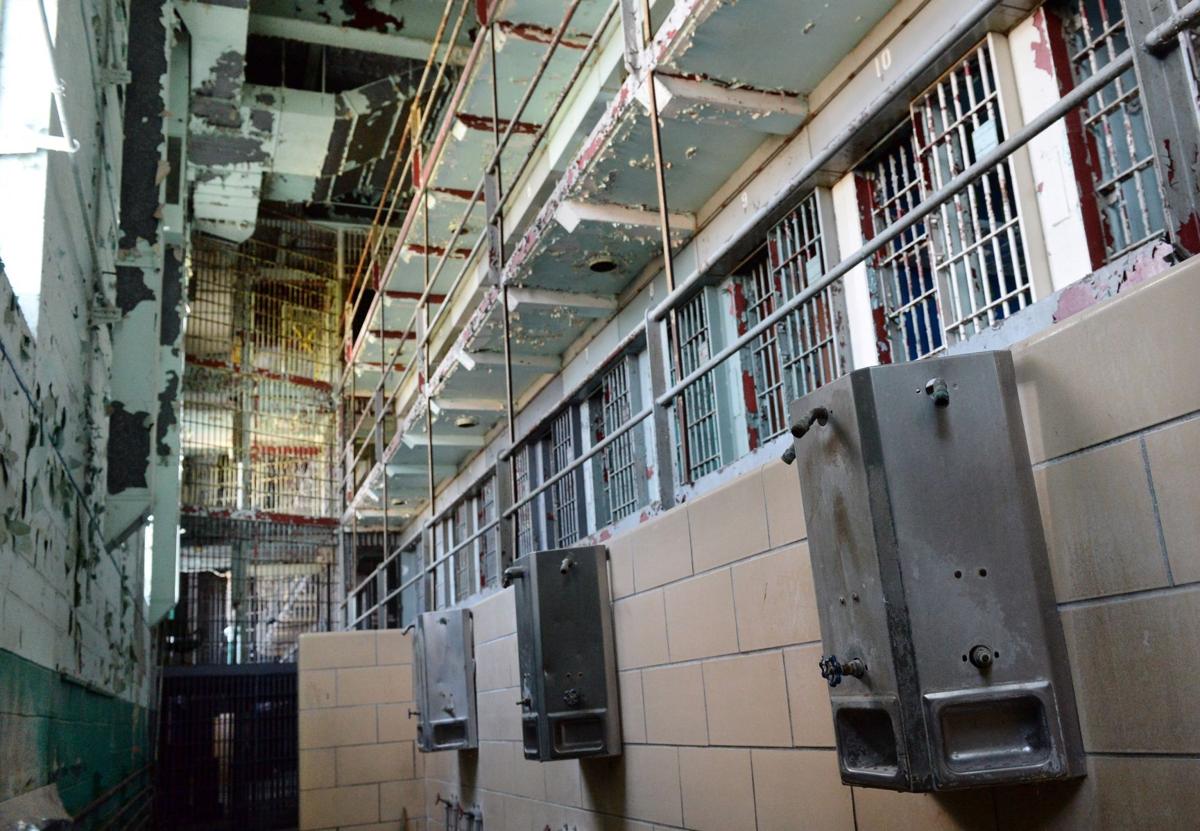 Conditions at the West Virginia State Penitentiary in Moundsville were tough. Space was limited and privacy was almost non-existent. Inmates showered in front of the cellblock. 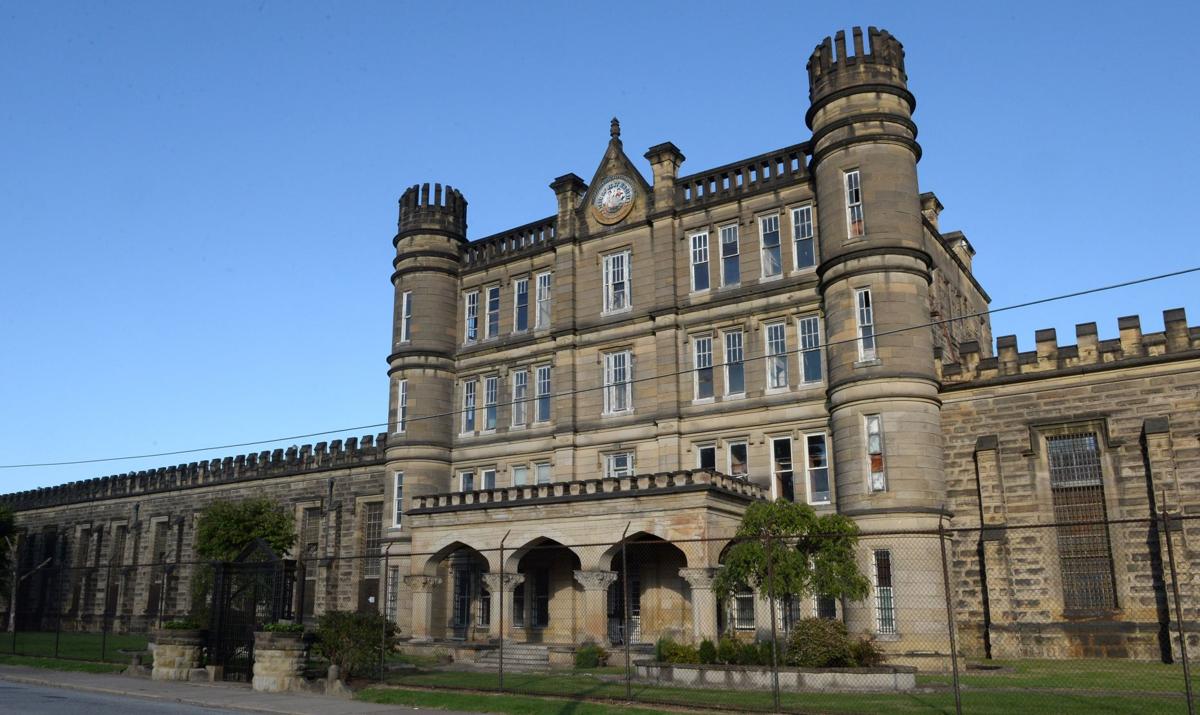 The West Virginia State Penitentiary kept inmates for more than 100 years. In recent years, the facility has turned into a tourist destination with space available for community events. 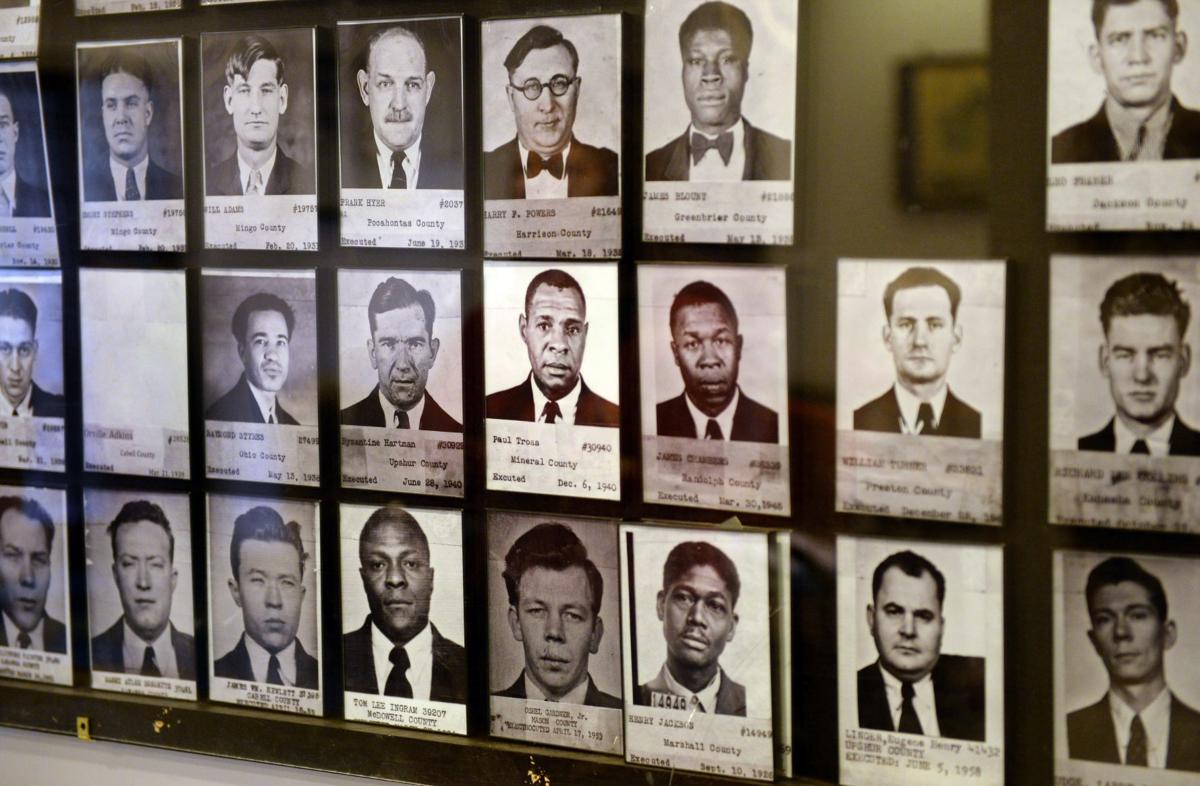 Mug shots of inmates executed at Moundsville Penitentiary line the walls of the gift shop. 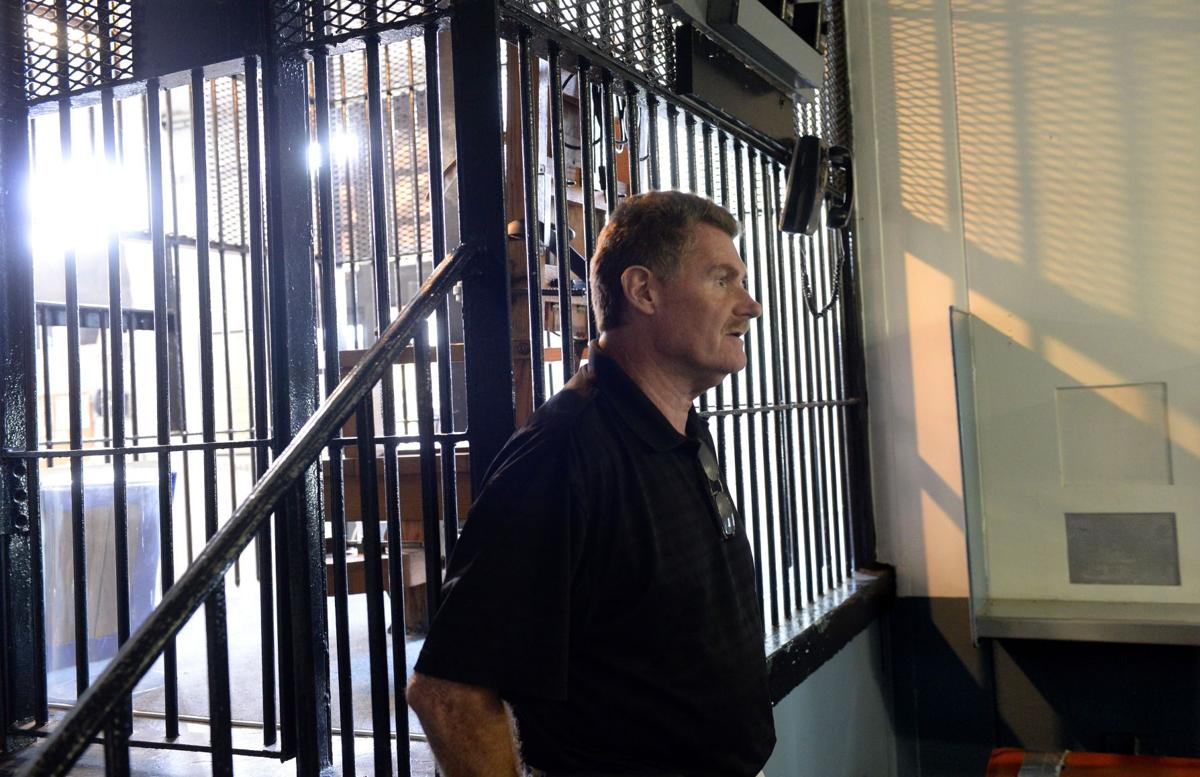 Tom Stiles leads tours at the Moundsville Penitentiary and has a wealth of knowledge about the history of the place. 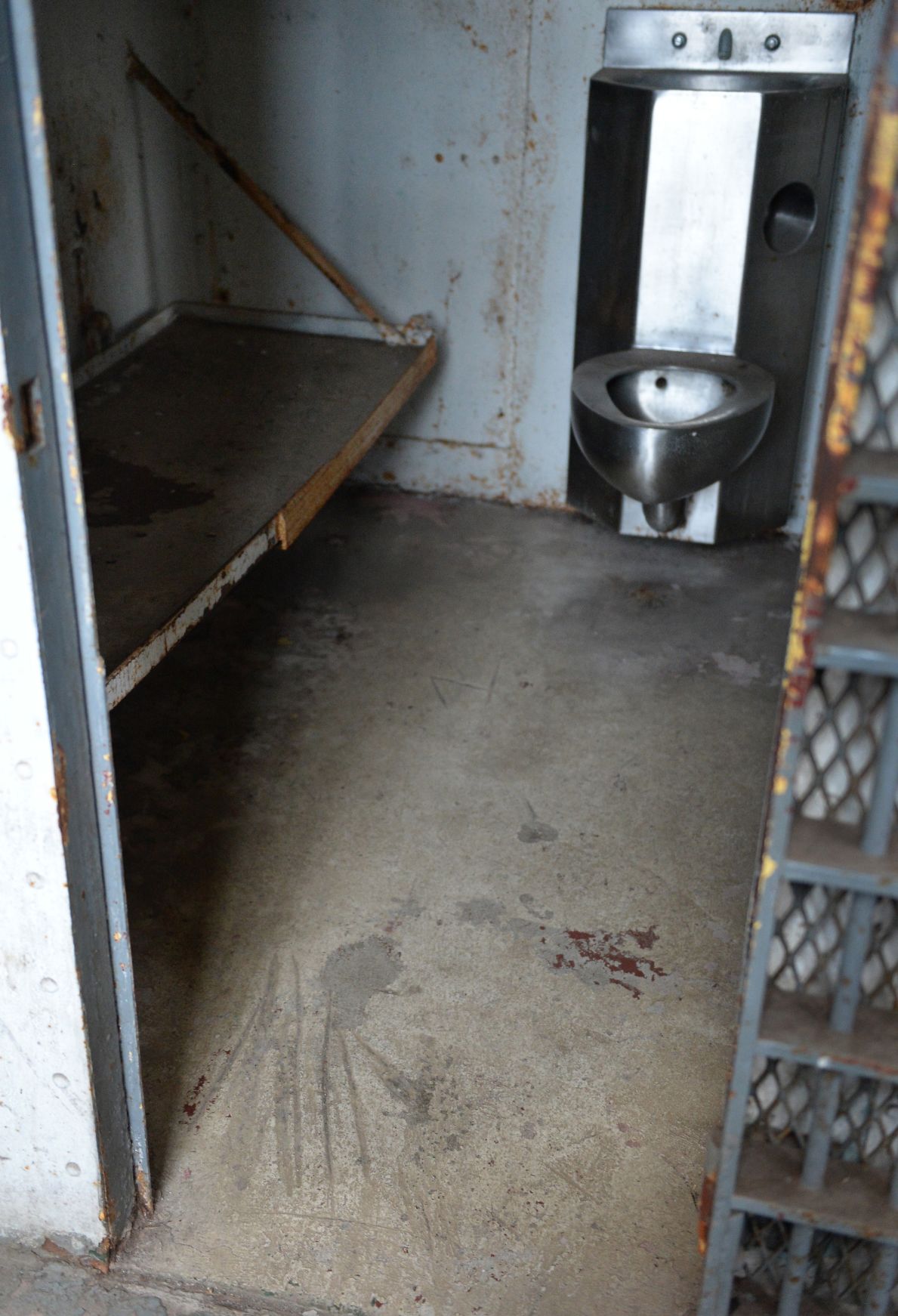 Cells inside the penitentiary were cramped and primitive. Inmates in the isolation section would spend up to 23 hours a day locked away. Some of them spent time sharpening improvised weapons on the floor. 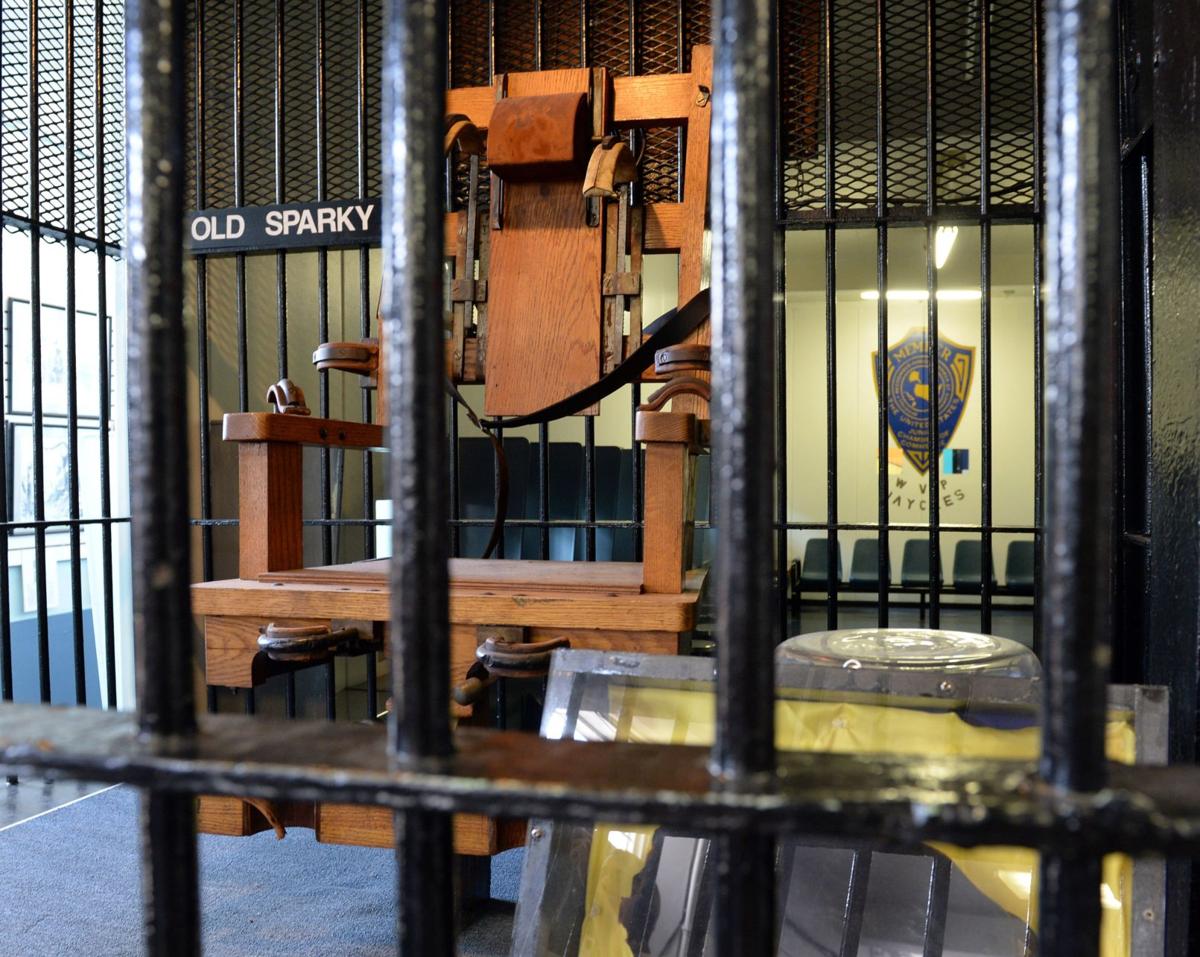 The “Old Sparky” electric chair is on display at the penitentiary entrance. The chair, built by an inmate, was used to execute nine inmates in the 1950s and early 1960s. Previously, executions had been done by hanging.

Conditions at the West Virginia State Penitentiary in Moundsville were tough. Space was limited and privacy was almost non-existent. Inmates showered in front of the cellblock.

The West Virginia State Penitentiary kept inmates for more than 100 years. In recent years, the facility has turned into a tourist destination with space available for community events.

Mug shots of inmates executed at Moundsville Penitentiary line the walls of the gift shop.

Tom Stiles leads tours at the Moundsville Penitentiary and has a wealth of knowledge about the history of the place.

Cells inside the penitentiary were cramped and primitive. Inmates in the isolation section would spend up to 23 hours a day locked away. Some of them spent time sharpening improvised weapons on the floor.

The “Old Sparky” electric chair is on display at the penitentiary entrance. The chair, built by an inmate, was used to execute nine inmates in the 1950s and early 1960s. Previously, executions had been done by hanging.

Nobody really knows when people started saying the former West Virginia State Penitentiary is haunted, but there were rumors about it even before the prison was decommissioned in 1995.

Tom Stiles, the caretaker of the former state penitentiary and a tour guide, said talk about strange happenings had been circulating for years. Some of the inmates thought the place was haunted, which he thought wasn’t uncommon for a place like it.

Within a year of the penitentiary being decommissioned, it reopened with former guards giving tours to the public.

There were a lot of stories to tell, and the public seemed interested.

“But what really put us on the map was MTV’s ‘Fear,’” Stiles said.

“Fear” was a reality television program on the cable network from 2000 to 2002. On each episode, contestants were taken to an allegedly haunted location where they spent two nights and went through a series of dares in hopes of confirming the site was haunted.

The penitentiary in Moundsville was used in both the pilot of the show and the first episode.

Since then, there has been a steady stream of ghost hunters, ghost chasers and other folks looking for a taste of the supernatural.

Other television shows and film have come to the penitentiary. The facility has seen camera crews from The Discovery Channel, ABC, SyFy and was used for the film “Out of the Furnace.”

Most recently, Netflix came to the penitentiary to film scenes for an upcoming series called “Mindhunter.”

Suzanne Park, executive director for the Moundsville Economic Development Council, said the prison had almost been used for the film, “The Green Mile,” but ultimately lost out to the Tennessee State Penitentiary in Nashville.

“We met with producers,” she said. “We were in the running.”

During the warmer months, the complex, more than 100 years old, holds day and evening tours and spooky-related special events, but it closes from November to April 1.

But the additions remain active.

Inside the penitentiary grounds, there’s a separate event center, which can be used for everything from staging for the National Guard to wedding receptions, birthday parties and dances.

“We have a huge amount of space, and you’re only really limited by your imagination,” Park said.

Whether the West Virginia State Penitentiary is haunted or not is debatable, but the place certainly looks the part and has the right history.

Built in 1876, the stone, gothic structure sits on 19 acres and resembles a medieval fortress. During its peak, the facility housed upward of 2,000 prisoners, most of whom lived in gloomy, 5-foot-by-7-foot iron cells.

The penitentiary was never designed to hold so many — not even half that number.

At times, many of these cramped cells contained up to three inmates. Two men would sleep on narrow bunks chained to the wall, while a third got a mattress to put on the floor next to a steel toilet.

Even single occupancy was claustrophobic, but each inmate had a footlocker for his personal effects.

“So you had to stow your footlocker and their lockers as well,” he said.

Any kind of space was a luxury.

The prison housed a variety of felons, but Moundsville saw the worst of the worst — murderers, rapists and serial killers.

It also had its share of criminal celebrities, the most notorious being Harry Powers, a lonely hearts killer. Powers used newspaper personal ads to lure lonely women into believing he was looking for love and marriage, but in truth only sought to rob and murder them.

Powers, who became the inspiration for the black-hearted Harry Powell in Davis Grubb’s novel “Night of the Hunter,” lived near Clarksburg, was arrested in 1931 and was convicted of the murders of two women and three young children.

It is generally believed Powers was likely responsible for at least two other deaths.

He was hanged at the penitentiary in the spring of 1932, one of the 94 men executed on the premises during the prison’s 119 years of operation.

A wall in the penitentiary’s gift shop displays pictures of most of the men the state killed at the West Virginia State Penitentiary. A face here and there glares hatefully from its black and white 3-inch-by-5-inch photo. Most have the bland expression of someone asked to pose for a photo in a work directory. They wear prison-issued uniforms or neat suits, possibly the clothes in which they were convicted.

There are even a few bow ties.

Of the men killed at the penitentiary, 85 were hanged. Nine were electrocuted.

The facility’s electric chair, “Ol’ Sparky,” greets visitors when they first come through the door. It’s kept in a cage and protected.

Originally, Stiles said, the chair was housed in a separate building located on the prison yard, referred to as “the death house.”

Previously, it housed the prison gallows.

Stiles said executions at the penitentiary were typically carried out without trouble, meaning the convicted were effectively killed, but there were occasional mishaps.

“Hangings were public,” he said. “You could come up to watch.”

That changed in 1931 when a noose was put around Frank Hyer’s neck.

Hyer had been convicted of murdering his wife.

At the time, hanging followed the long-drop method, which factored height and weight into how far a drop the condemned required to break his neck.

The hanging resulted in decapitation and a new policy: executions would be by invitation only.

Electrocutions were carried out beginning in 1951, and Stiles said during each execution, an electrician came to the penitentiary to establish the connection on one of three switches three guards would pull simultaneously.

“They put all the names of the guards in a hat,” Stiles said. “They picked the names out, and it was just something they had to do. It was stated as part of their job. If you wouldn’t do it, you were discharged.”

The death house was torn down at the request of inmates after the death penalty was abolished in West Virginia in 1965.

Aside from the state-sponsored executions, violence and murder were commonplace during the last couple of decades of the penitentiary’s operation.

Gangs like the Aryan Brotherhood and The Avengers motorcycle gang roamed the yard and frequently clashed over things like turf and control over the flow of contraband.

Because of poor funding, conditions within the prison continued to deteriorate. In 1986, inmates rioted, partly, Stiles said, over a leaky sewer pipe that went under the floor of the prison cafeteria.

“The smell was terrible,” he said. “Can you imagine trying to eat?”

Guards and kitchen workers were held hostage and threatened. Gov. Arch Moore met with prisoners and negotiated for their release.

“They got pretty much everything they wanted,” Stiles said. “There were plans to decommission the prison already, but Gov. Moore agreed to build a new cafeteria.”

The hostages were released, essentially unharmed, but not before the inmates killed three of their own, men believed to be prison snitches.

The state of West Virginia built the cafeteria, and the old cafeteria was partly converted into a visiting area for prisoners and their families.

The walls inside are decorated with cartoon characters and a picture of a unicorn.

“The inmates wanted the space to be as welcoming as possible,” Stiles said. “They didn’t want it to feel like a prison to the kids.”

Art done by prisoners is scattered around the penitentiary. Landscapes and scenes from nature were popular.

While the West Virginia State Penitentiary became one of the roughest prisons in the country, it didn’t start out that way.

For years, going to the penitentiary was a high social function. An invitation to dine with the warden in his apartment inside the prison was highly sought after.

Locals could even check out an inmate for the day, hire them to do farm or yard work or clean their homes.

“You still had to pay them for their work. I think it was 25 cents a day,” Stiles said.

The prison was also, largely, self-sufficient. Prisoners raised food on the work farm, handled maintenance around the facility and even mined coal to power the penitentiary.

Eventually, state government scrapped all of that.

Overcrowding, budget cuts and even a change in the temperament of the incarcerated steadily made the environment of the penitentiary toxic. Changes in how the country and the state housed and treated prisoners led to the decommissioning of West Virginia State Penitentiary.

Most inmates were sent to Mount Olive to complete their sentence.

Stiles said the newer facilities were very different than what the inmates at Moundsville had. Cells in Mount Olive have windows to allow in sunlight. The cells are bigger and more private.

Stiles rolled his eyes about that.

Whether the penitentiary is haunted or not depends on whether you believe in ghosts or not. Otherwise, the place is just haunted by memories and by history. A lot of lives passed in and out the front gate.

Parks said occasionally they’ll get a former inmate come through for a tour. They’ll bring their families, their kids and grandchildren.

“They want to show them where they slept and where they ate,” she said. “This place was important to them.”

One of them, she said told her he preferred Moundsville to Mount Olive.

“Here, they want us to talk about our feelings,” the inmate told her. “In Moundsville, we settled things.”