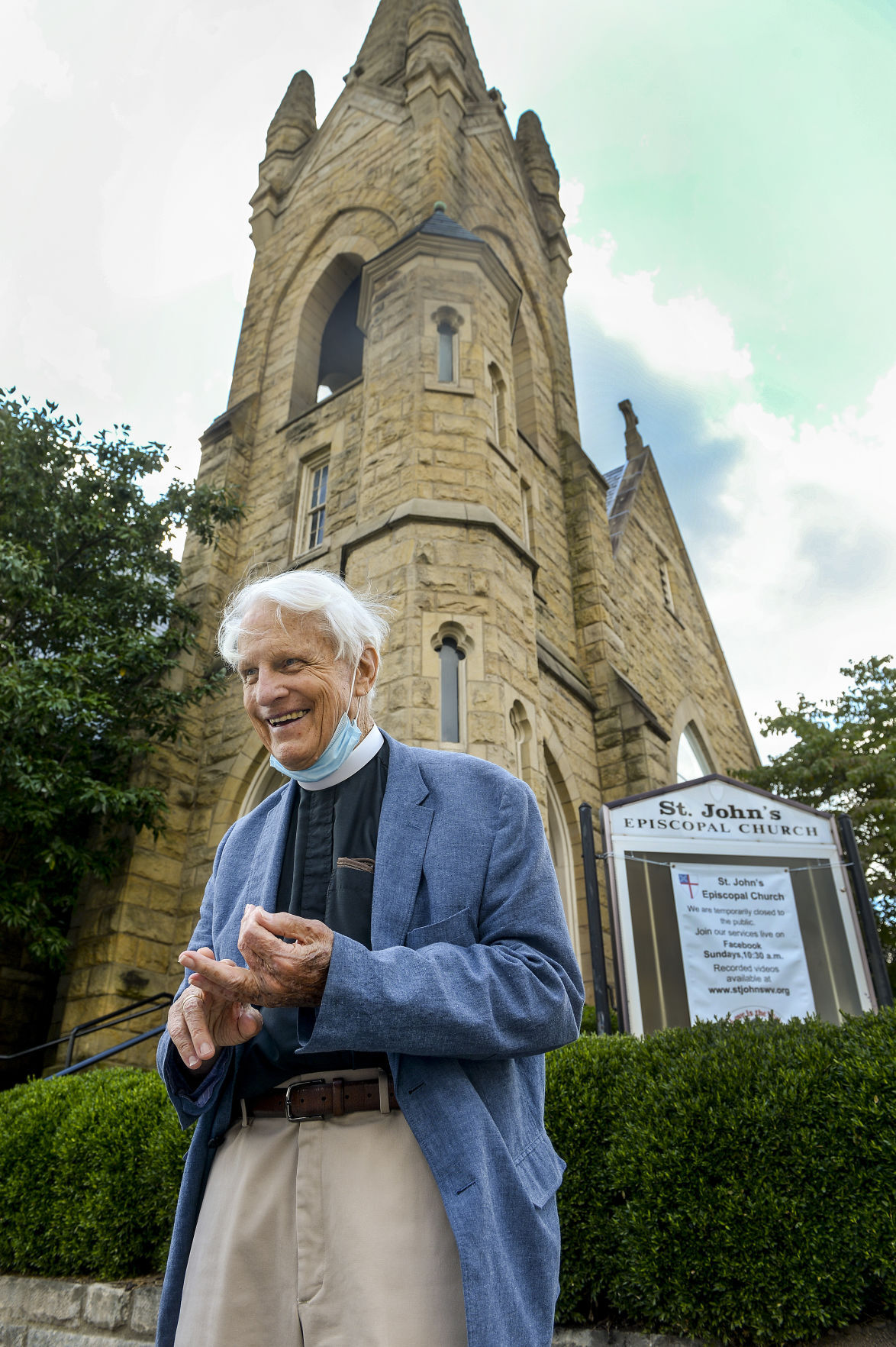 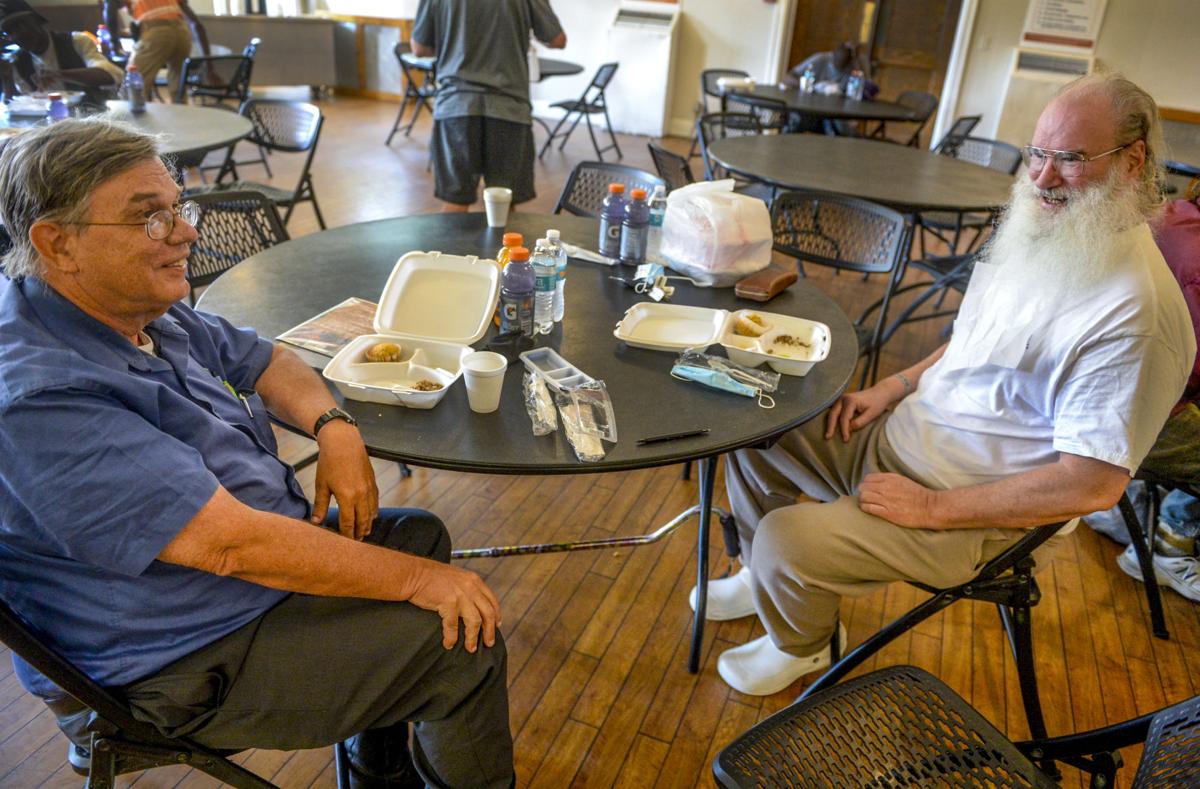 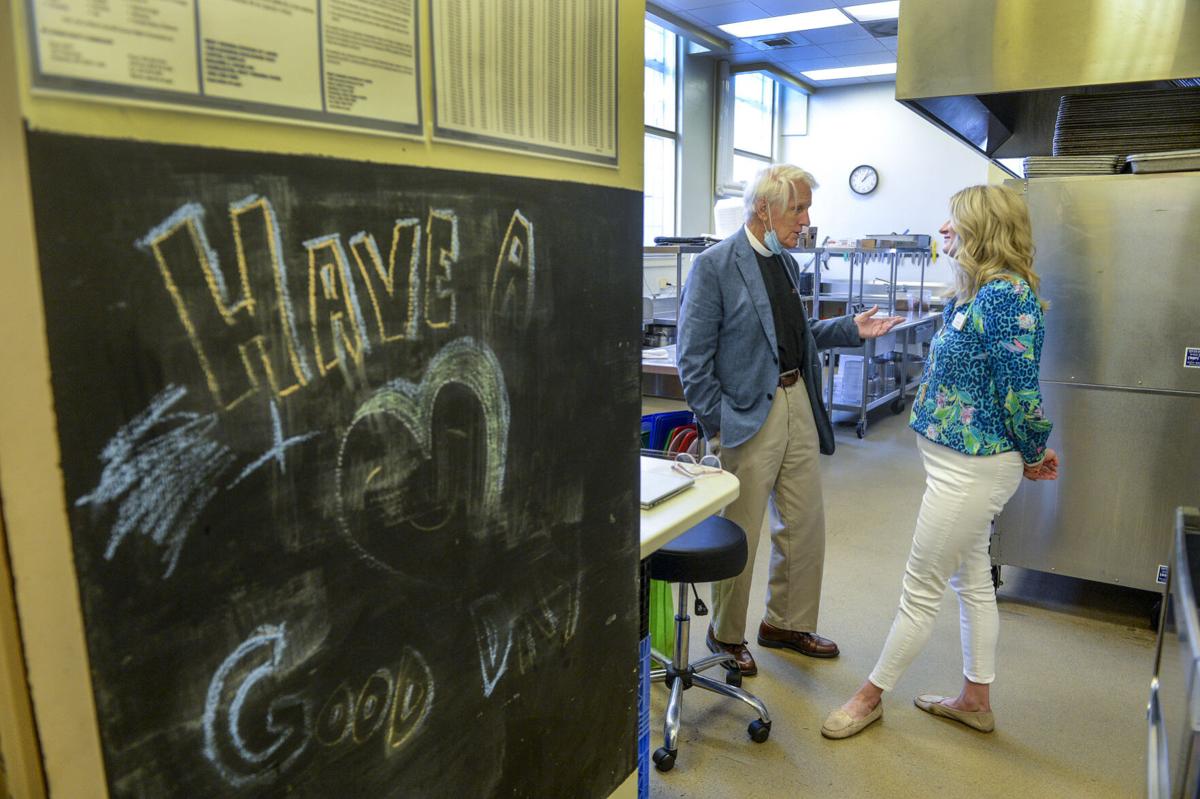 Manna Meal director Amy Wolfe talks with founder Jim Lewis in the kitchen where hundreds of meals are prepared daily. 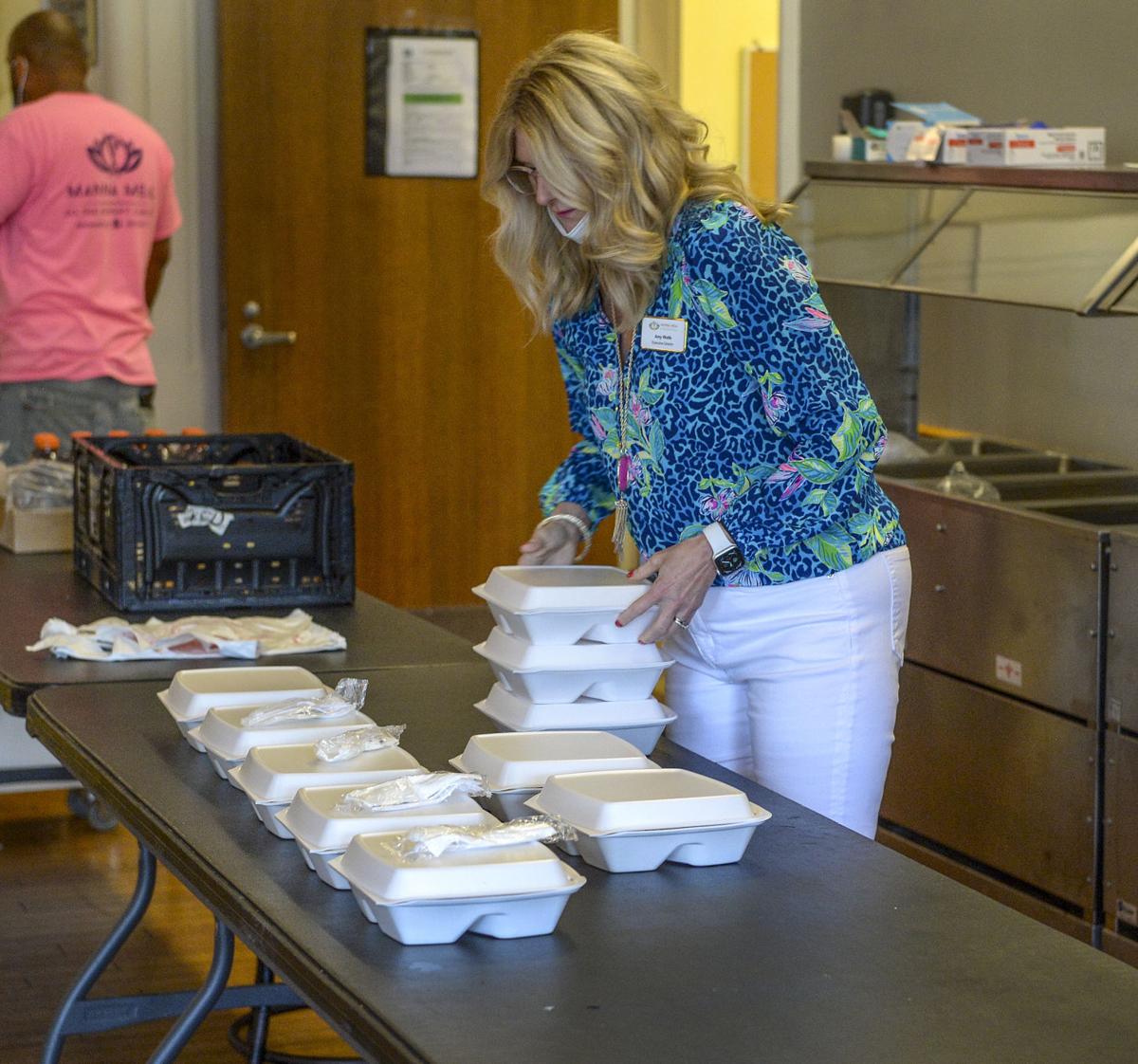 Manna Meal director Amy Wolfe brings out more lunches to go, where many patrons take the disposable containers and dine off site. 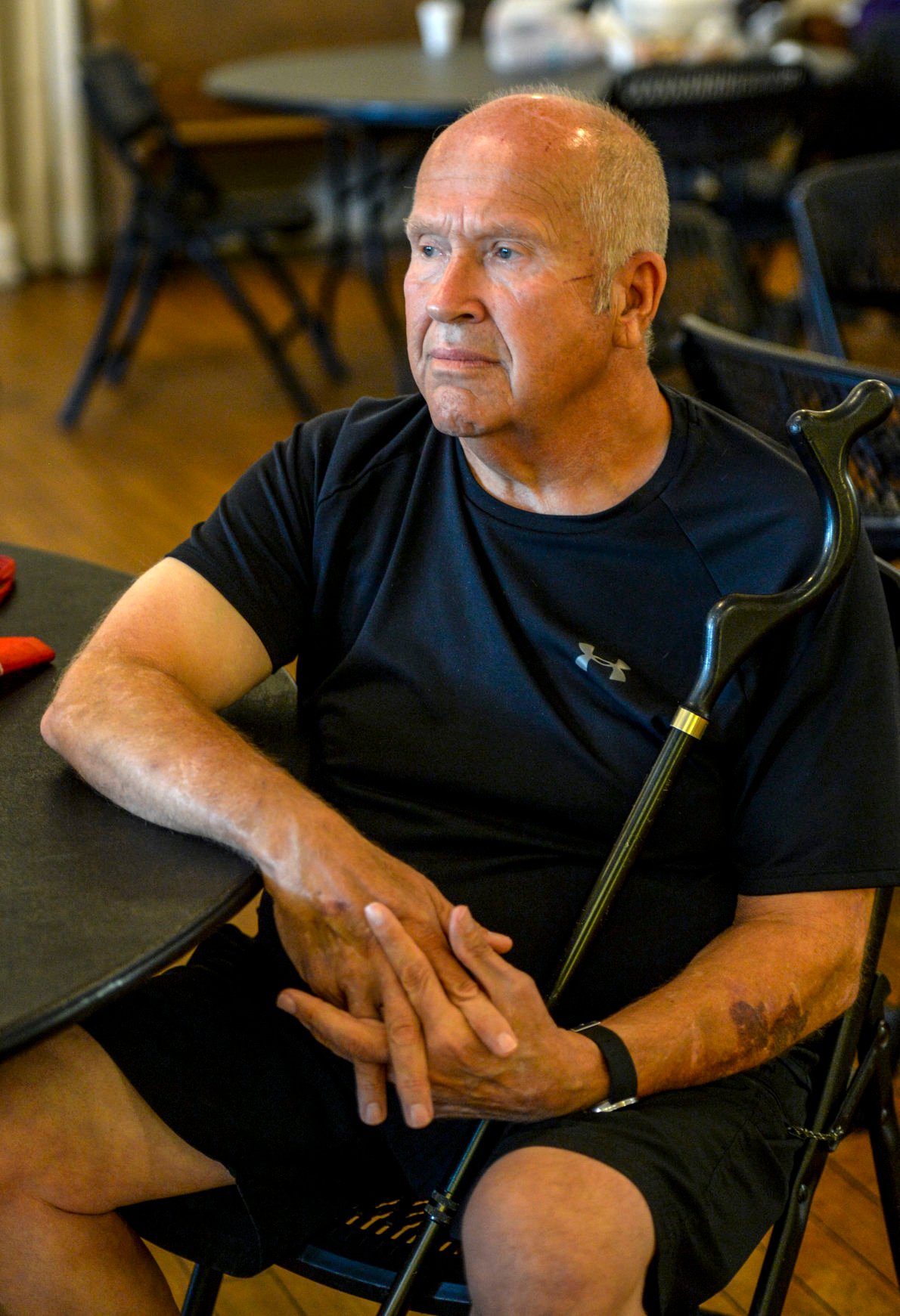 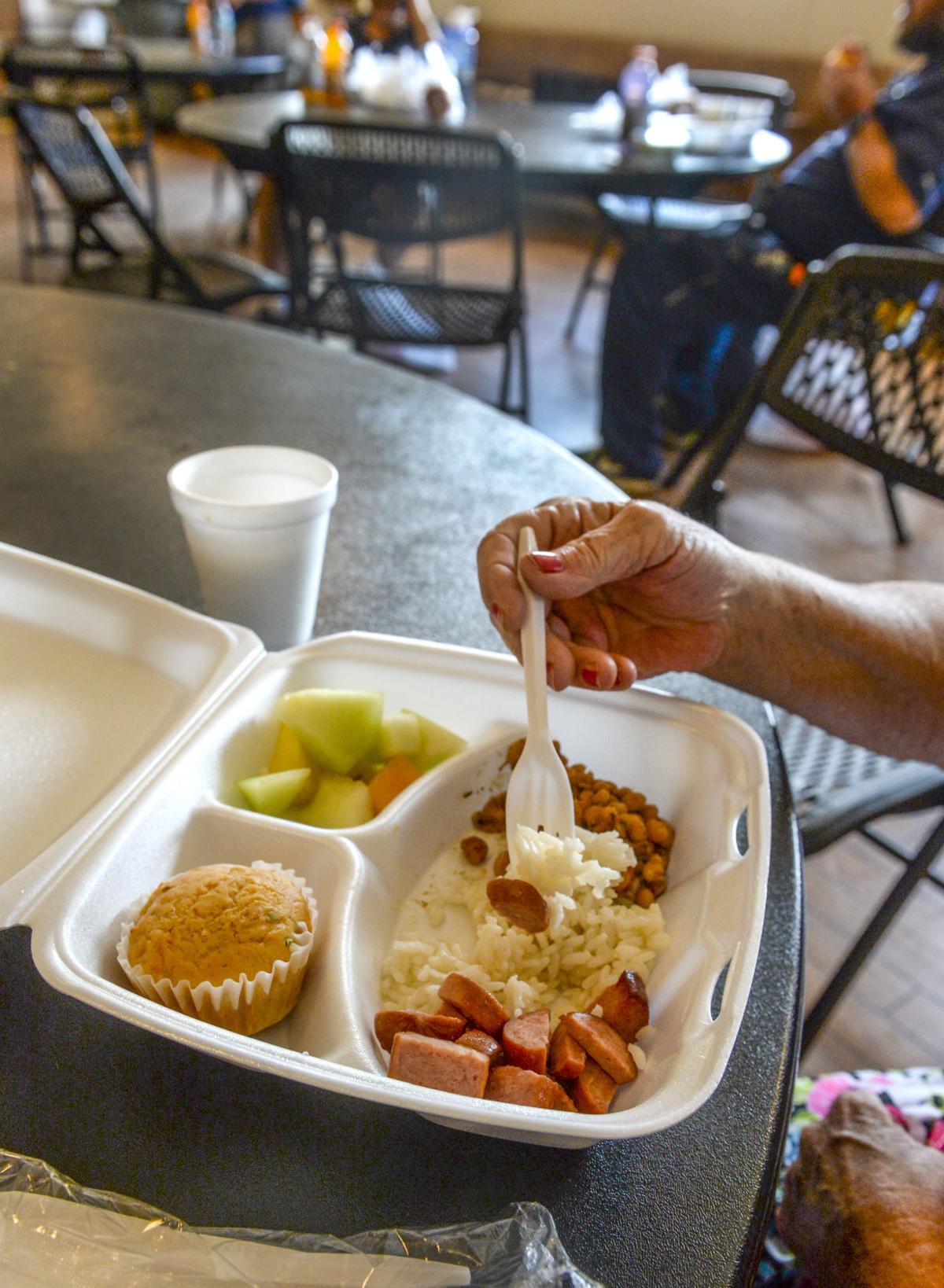 Manna Meal director Amy Wolfe talks with founder Jim Lewis in the kitchen where hundreds of meals are prepared daily.

Manna Meal director Amy Wolfe brings out more lunches to go, where many patrons take the disposable containers and dine off site.

The first time St. John’s Episcopal Church opened its doors to serve free meals right there at the church, just one man showed up.

“It was awkward for him because people came in one at a time and what they usually did back then was give them a little chip and send them over to the Quarrier Diner and they’d get a little lunch and we’d pay the bill,” said retired Rev. Jim Lewis, then the incoming pastor at St. John’s, who sat down with the man and joined him for the meal, a bowl of soup and a peanut butter sandwich.

“He sat there with me like, ‘I wasn’t expecting this. He’s gonna preach to me now,’” remembered Lewis with a wry smile.

The church staff, vestry, and ultimately the parishioners had all agreed they could do something better than handing out chips. They collected a volume of food to launch the project and Lewis became the founder of the Manna Meal soup kitchen. Word spread quickly and today — 45 years after that first shared lunch — Manna Meal serves two meals a day, every day, more than 10,000 meals every month.

Over a warm lunch a few days ago, George Cardin, 65, described his old life matter-of-factly: He’d had a wife and a family, a career as an engineer and a job with a payroll to meet. After a massive heart attack and other life changes — “Things happen,” he said — he began coming to Manna Meal, helping out where he could.

“At times when I had no money, didn’t have two nickels to rub together, Manna Meal was there for me,” he said.

Across the table from him, 67-year-old Michael Layne said he had a degree in business administration, decades of work history and a long list of creative credits, but finds himself now trying to survive on social security.

“I like the beef and noodles the best,” he said. “And the companionship.”

Nearby, Robert Sheets, 70, a Charleston city councilman who had a stroke several years ago, said it is difficult for him to make his own meals now.

“Manna Meal has been a Godsend to me,” he said, adding that he’s not sure what he would do — how he would make ends meet — without it.

“My income is less than my outgo,” said Sheets.

He also said the public perceptions of typical Manna Meal clients aren’t completely accurate. There are some who are on the streets, he said, but a lot of others are just trying hard to balance a meager budget.

A hidden benefit to the meal service, said Layne, is that it does more than nourish bodies. It also nourishes souls, in a way.

“This is part of my social connection,” said Sheets. “I miss it when I can’t come here. It’s a lot better than eating by myself.”

“The rule was, anybody that came in this church could have a meal here. It could have been a parishioner. They could have been off the street. We did not ask them any questions about where they came from,” said Lewis.

“We also made the decision — and this puzzled some of the other churches — not to pray,” he said.

People in need, he felt, had been “religionized to death” in order to get a meal. They needed to be treated more like welcome guests.

“And that translates for me to what Jesus did, because he fed 5,000 people. Did he quiz all those people? No. This is what a meal is. You come to my house to eat, I’m going to feed you. I’m not going to ask what kind of life you’re living,” he said.

Lewis was new to town, with orders to open the church to the community.

Working with people like Judy Teel, the first executive director for Manna Meal, and Bob Rodecker, who served as president of the Manna Meal board early on, and other staff he described as “outstanding,” the mere act of feeding hungry people seemed so basic, so simple.

On the heels of the explosive and violent textbook wars, at the height of protests over the draft and our country’s involvement in Vietnam, with the women’s liberation movement flourishing and mental institutions releasing patients with nowhere to go, nothing, it seemed, was simple.

“It was a perfect storm here in the early 70s. The committee against registration for the draft met here, and the Vietnam Veterans had its first meeting here, right across the hall. … It was all the women’s liberation stuff. Everything was coming unglued,” said Lewis.

Against that backdrop, he added, “Manna Meal was one of the most controversial things.”

Part of the objection was racial — some of the people who needed help were Black at a time when school desegregation and civil rights protests were a not-so-distant memory. Part of it was the mental illness involved. Some of it was economic, a sense of resentment at what seemed to be endless handouts.

A longtime friend, who was on the vestry, was among those objecting – particularly after one of the needy diners came to church and sat in front of the man.

As it turned out, people who needed food often had a long list of other needs. Some needed a place to shower, or sleep. Some needed clothes, job assistance, health care. The church couldn’t meet all of those needs. But over time, the energy of providing food proved to be a catalyst for other kinds of aid programs.

A small building slated for destruction in the church parking lot instead became the first Covenant House. A trip to the hospital prompted a weekly clinic for diners with medical issues.

“And Health Right grew from that little seed,” said Lewis.

Not only that, said Wolfe, but the makeup of those figures has shifted: These days, there are more people who have jobs but still can’t make ends meet.

“A lady called the other day and said she had three small children, and just the tension in her voice, it was heartbreaking,” said Wolfe.

“We are seeing so many people who’ve never had to use our services before.”

The need has increased, donations are down, and it’s worse at the end of every month, she said. “It’s just like any of us that, you know, things get tight.”

A lot of the clients were already struggling “shoestring to shoestring” before the pandemic, Wolfe said.

“Pretty much one unidentified expense comes up, and they were in big trouble right when everything shut down.”

Those in service industries were particularly vulnerable, she said.

“We see a lot of servers and cooks will come in in the morning and grab breakfast on their way out. And we don’t see as many lunch. … I have three clients that are working while staying at the shelter, trying to get back on their feet.”

“We continue to see many, many new faces that people probably wouldn’t think fit our traditional mold,” she said.

And yet, there is a growing sense of public empathy fatigue. Otherwise compassionate people can point with frustration to all the businesses that are struggling to find employees, to the increasingly visible homeless population, the ongoing opioid epidemic and untreated mental illness. And some of them wonder aloud if there are personal choices at the root of all that struggle.

For those at the heart of the Manna Meal mission, none of that matters.

“When did we become a society that it was so easy to sit back and judge people? You know, don’t people who make mistakes deserve second chances?” she asked.

“That’s not my call. My call is to make sure that the minute they walk through that door, they’re treated with dignity and respect. And they get fed.”

As for questions about whether some of those who show up for a meal are just taking advantage of all the handouts, Jim Lewis is not worried in the least about that.

In fact, he assumes it happens a certain percentage of the time.

“If I were on the street, I might do a little scraping myself. And we hear, ‘This class has taken our money. They’re getting health care and they’re getting food. They’re ripping us off.’ It seems to me we had the feeding of the 5,000 as a good example,” said the founder.

“In the Bible it says — and I’m not a literalist, but there’s some things that come at you. And I take some of those things quite literally — ‘The greatest of these is love.’ I take that quite literally.”

Everything else is just a distraction, he said.

At the end of the day, 45 years after Manna Meal’s mission began, its founder said, it really is just that simple.

Maria Young is the features editor. She can be reached at 304-348-5115 or maria.young@hdmediallc.com. Follow @mariapyoung on Twitter.