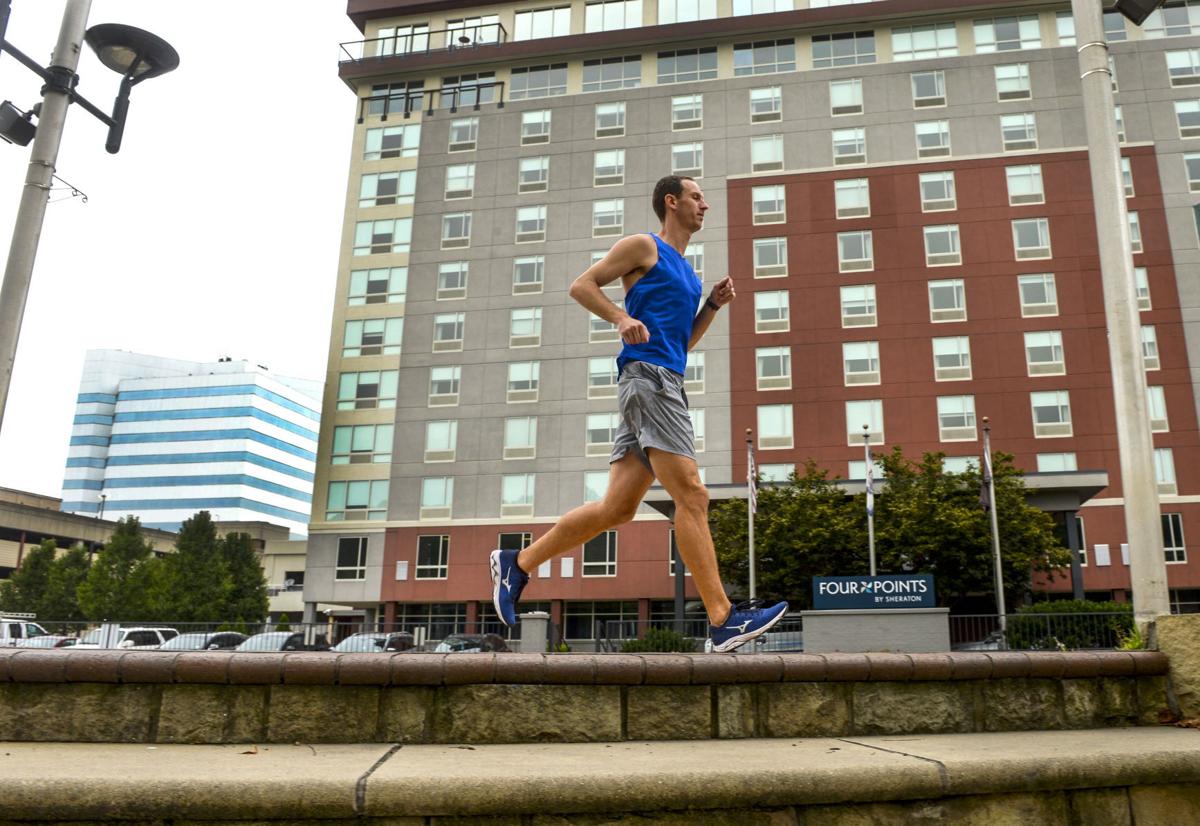 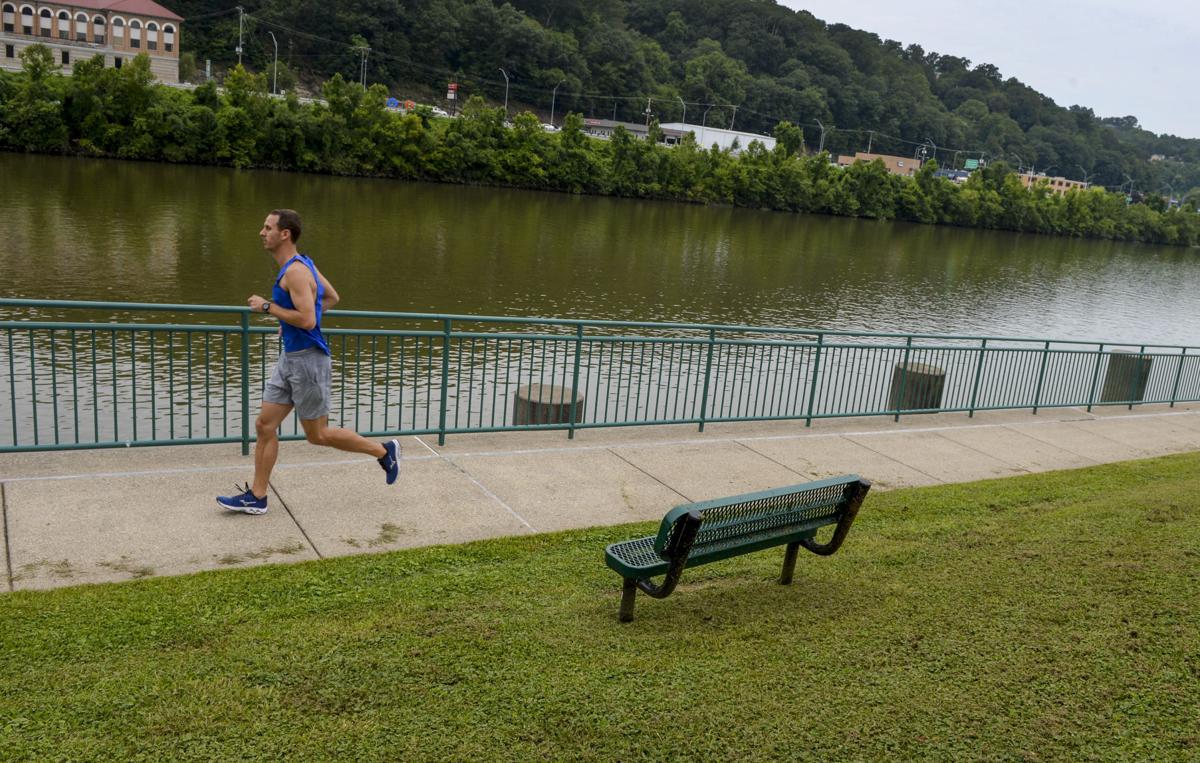 Andrew Dawson takes time for himself to run along Haddad Riverfront Park. 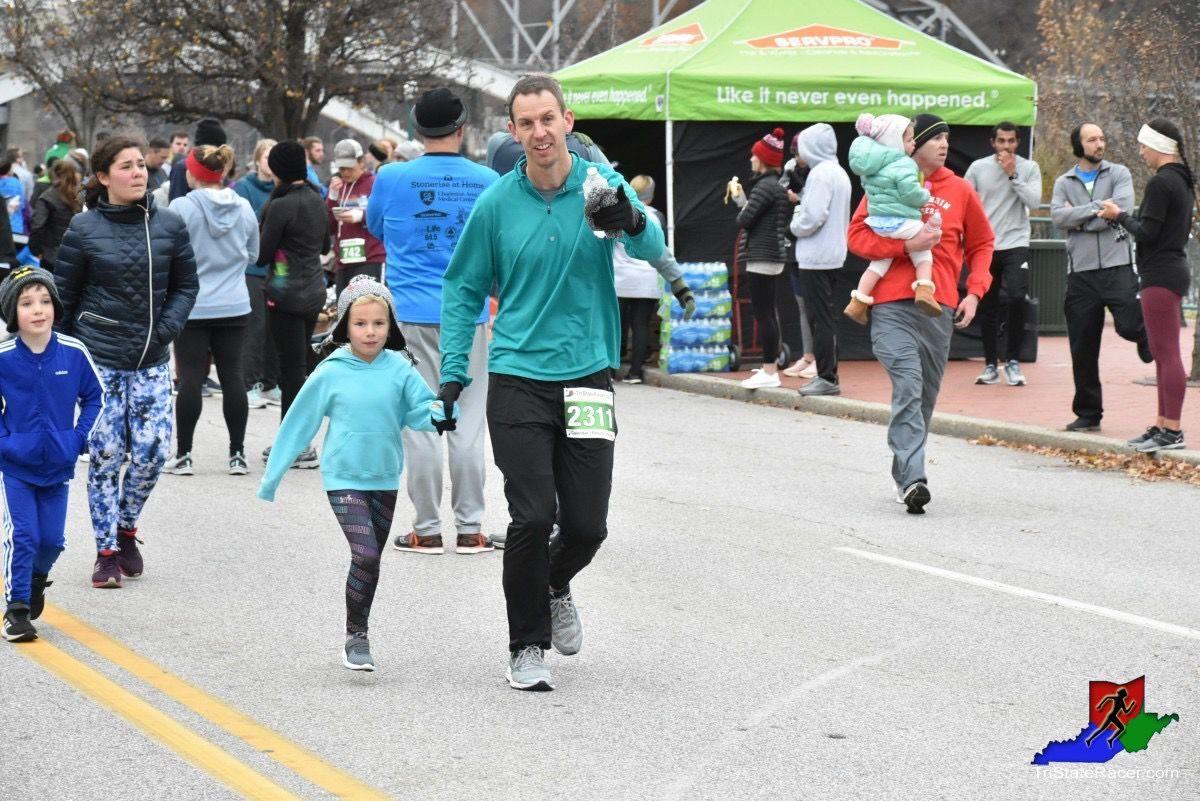 After a full year of daily runs, Andrew Dawson is joined by his daughter, Isla, then 5, for the 2019 Drumstick Dash. 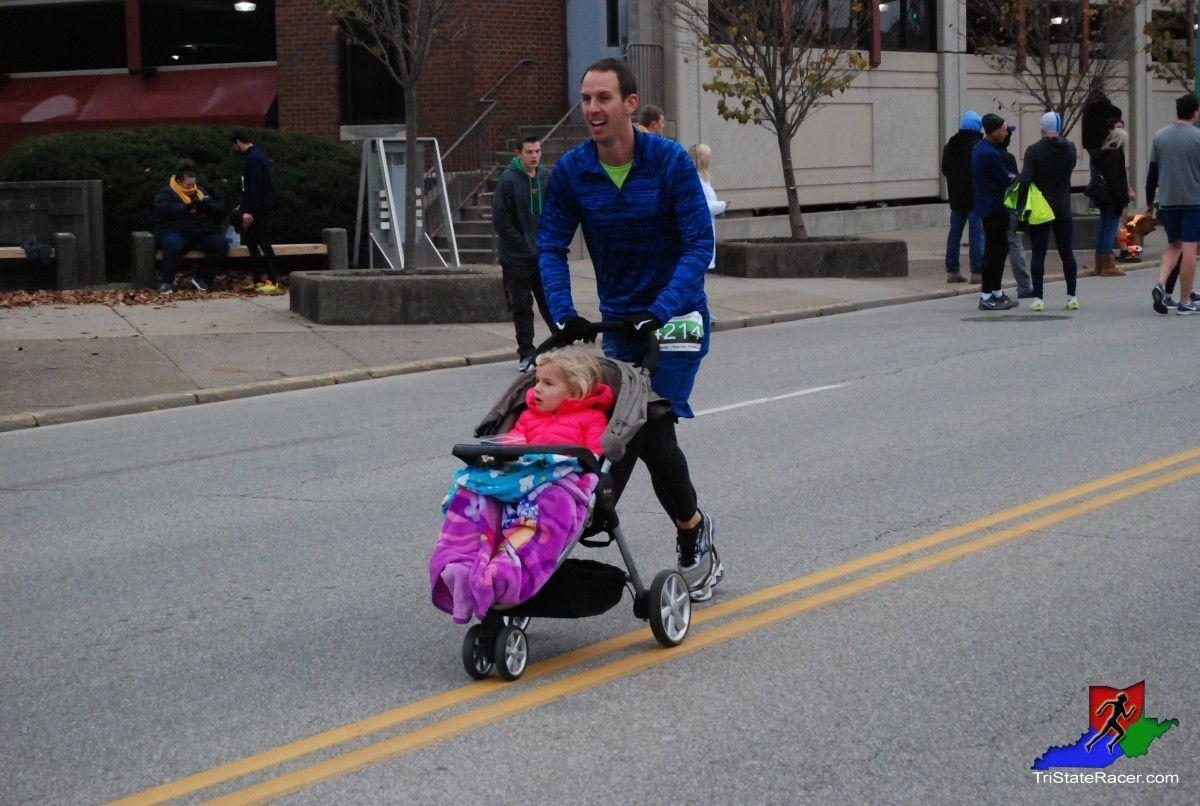 The day that began it all: Andrew Dawson pushed his daughter, Isla, in a stroller along the 5K route of the 2018 Drumstick Dash. More than 640 days later, he’s still running every single day. 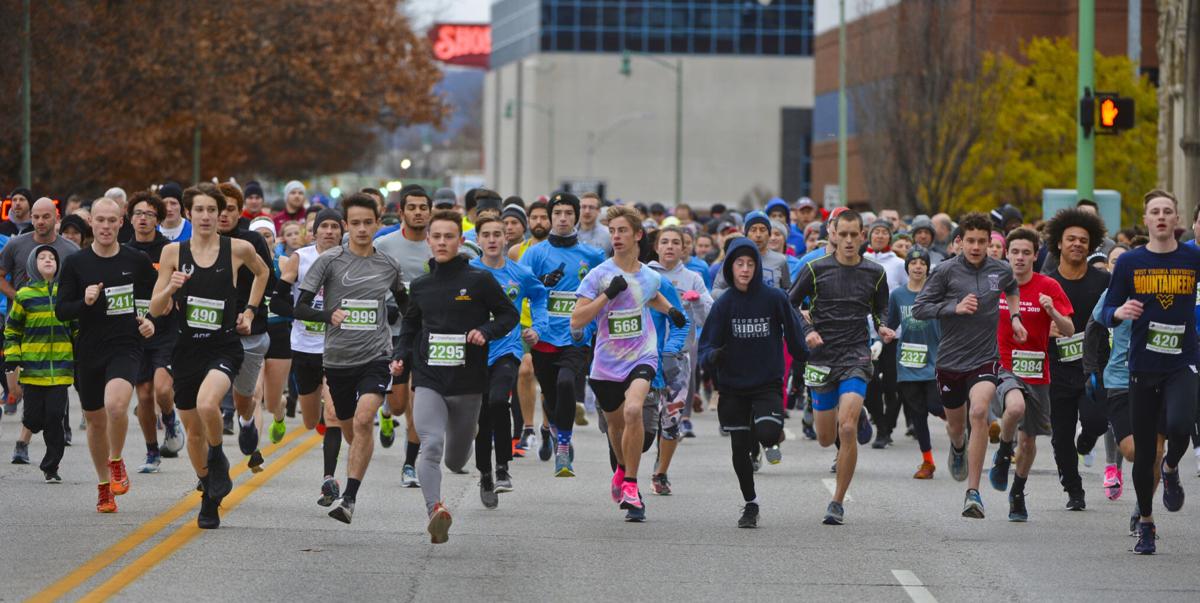 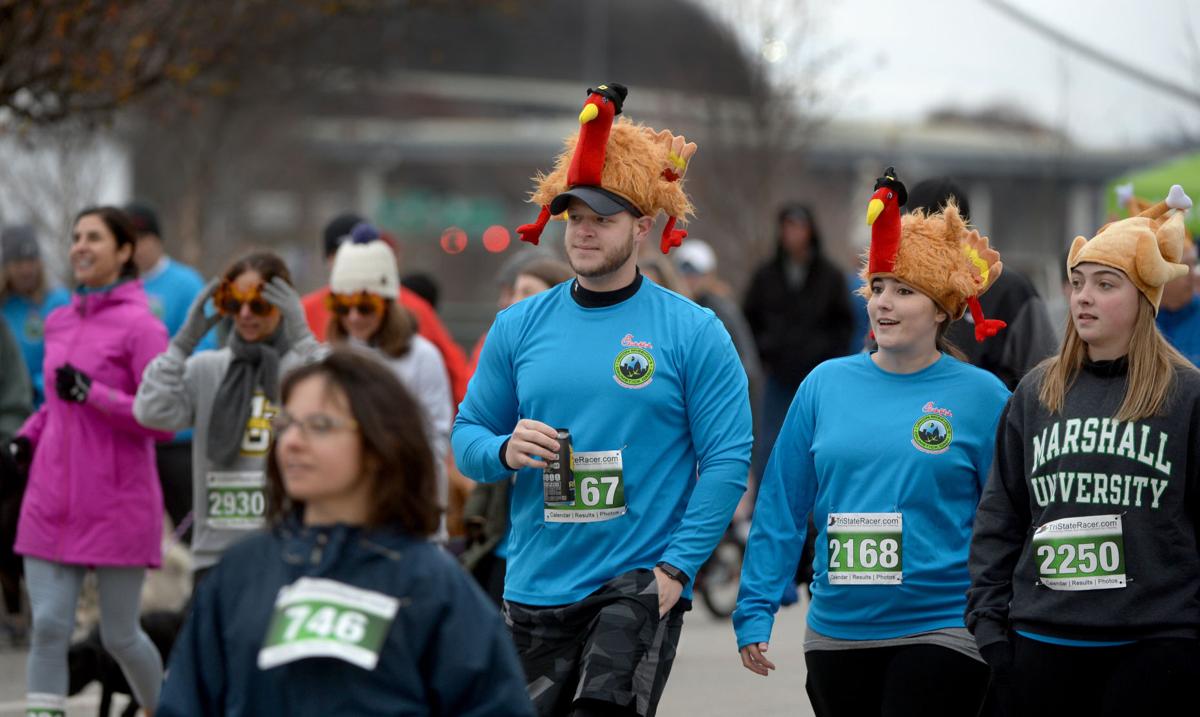 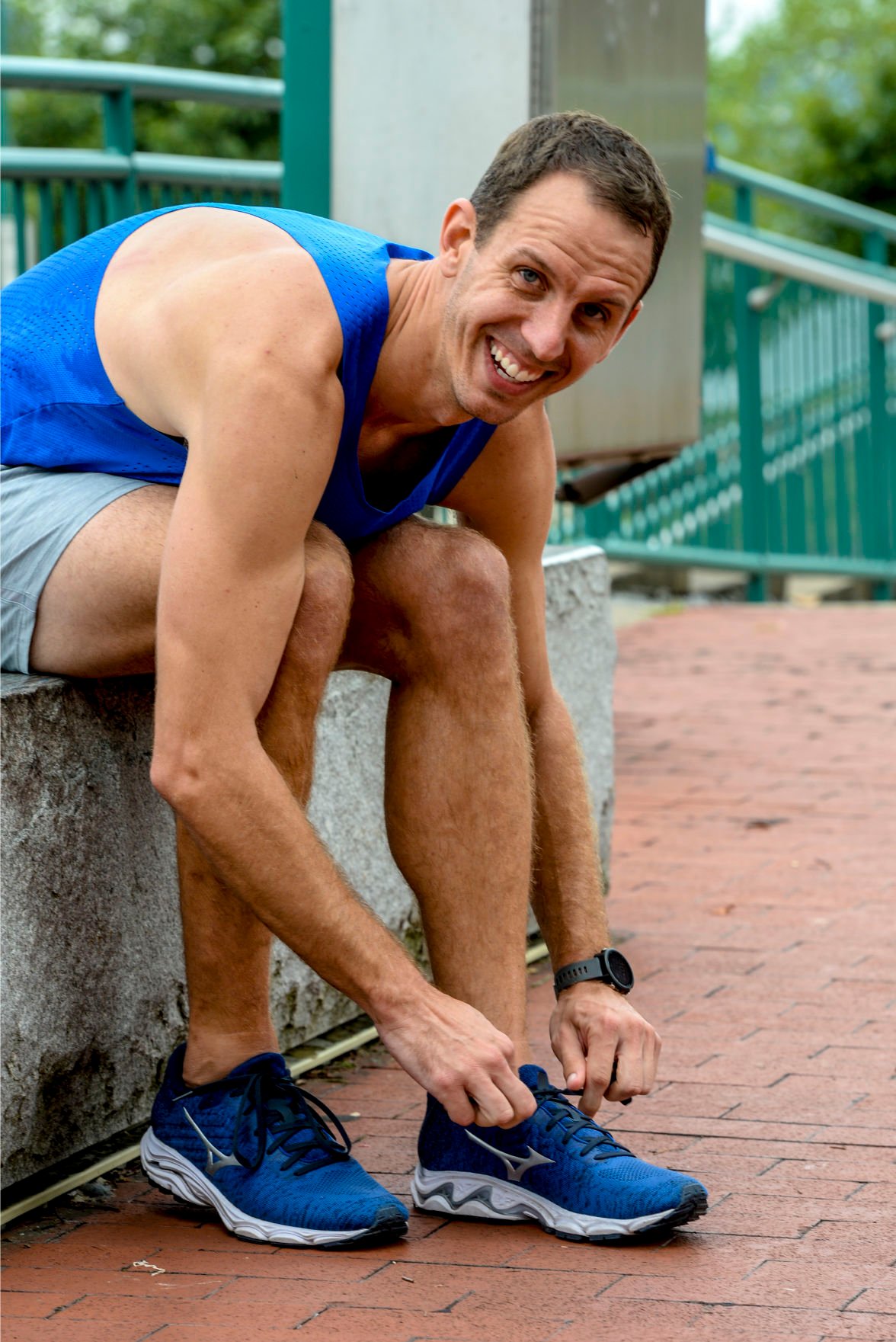 Andrew Dawson prepares for a run along the Kanawha River.

Andrew Dawson takes time for himself to run along Haddad Riverfront Park.

After a full year of daily runs, Andrew Dawson is joined by his daughter, Isla, then 5, for the 2019 Drumstick Dash.

The day that began it all: Andrew Dawson pushed his daughter, Isla, in a stroller along the 5K route of the 2018 Drumstick Dash. More than 640 days later, he’s still running every single day.

Andrew Dawson prepares for a run along the Kanawha River.

He’d been a runner before, even had a casual group he ran with and enjoyed. But life got busy and he’d been out of the habit for a while. Truth be told, it wasn’t really how he wanted to spend the holiday.

“I thought, you know, ‘I really don’t want to do that, but I’ll do it because the whole family’s doing it,’” he said.

Little did he realize that simple decision, born in the throes of some friendly family peer pressure, would be the very first step of a journey he’s still on today, more than 645 days later.

The run, held on Nov. 22, 2018, was fun, he said. He pushed his daughter, Isla, then 4, in a stroller and dreamed of the two of them someday running in such an event together.

“I had really fallen off the wagon three years ago or so. I wasn’t doing a lot of running,” Dawson said.

He’d stopped going on runs with his group, stopped running events altogether. He missed running, missed his friends — and apparently, they missed him, too.

So they issued a challenge.

The deal was to run at least a mile every day.

The first week wasn’t too tough.

Thanks to the holiday, there was a long weekend with a little more free time than usual.

Then things got hectic.

“So I just made a commitment to myself that really between Thanksgiving and New Year’s, I’m really going to try, really hard, no matter what,” Dawson said.

Between work, Christmas parties and family gatherings, it took a certain amount of determination to meet the challenge. It also took some planning.

Otherwise, he thought, his goal would turn into a long series of empty promises to do it tomorrow.

“Before I started this, that’s what it turned into all the time. It was, ‘I really wanted to run today, but I’ll do it tomorrow.’ And then work gets in the way. Or there might be soccer practice — I don’t want to miss that. Then it’s, ‘Well, let’s go to dinner afterwards.’ And before you know it, it’s 9 o’clock and, ‘Well, I haven’t had time to relax, so now I’ll watch TV.’”

It was necessary, he said, to think through his day before his day actually began.

There were 40 days to run between Thanksgiving 2018 and New Year’s Day.

Forty busy, hectic days with other obligations that could have taken over.

That’s what happened the first time around, he said, when he kept telling himself he’d like to go for a run but it never seemed to happen.

“Life gets in the way. I was busy with work, busy with a young daughter. A variety of things like that, and I think a lot of times exercise gets put back on the back burner,” Dawson said.

And he found that sometimes it meant saying no or “not right now” to other priorities.

“One thing leads to another, leads to another and before I know it, I’ve got my laptop open in the car, I’m working, sending out emails. And then I think, ‘I can’t do this right now.’ So I shut my laptop … but still, there is still something that if you let it, it will hijack your day every single day.”

Resisting that became habit. And step by step, he made it through those first 40 days.

He bought rain gear, and has used it more times than he can count now.

He also bought a treadmill he found difficult and boring, for use as an absolute, last-case resort.

Most of the time, he was outside, breathing the fresh air, enjoying the change of scenery.

By that time, he’d long since met the challenge.

He could’ve quit the daily run at any point.

“I know there’s a lot of science behind it in terms of the endorphins. I just think being outside, getting exercise, getting your blood flowing, that just puts me in a better mood. I feel like a lot of people I see on a daily basis or have close relationships with, I think they would agree with that,” Dawson said.

What he doesn’t do is stew about all the things that are bothering him or stressing him that feel less than perfect in that moment.

“If I’m able to go out on a run on a Saturday morning before anyone else wakes up in the house, I’m in a really good mood when I get back.”

It takes Andrew Dawson five minutes and 45 seconds to run a mile. By the time he gets on his shoes, gets to the starting point and stretches out a bit, it takes a good 15 minutes.

And that’s the minimum. Some days, he wants to run further than one mile and take longer than 15 minutes.

Some days, he has to fight past the guilt.

“There is part of me that says I know I put my wife or my daughter on the back burner at times whenever I go out to get a run in. And maybe it is only 15 minutes, but maybe it’s a few hours,” he said.

“I look at it and think there has to be a give and take. If I go out and run for 30 minutes, maybe I shouldn’t pick up my phone and scroll through Facebook or Twitter or Instagram for 30 minutes. It’s a trade off,” he said.

There is something to be said, he thinks, for doing something for himself.

“If I can’t find 15 minutes throughout my day every day that I can devote to myself, then man, I’ve got too much going on.”

His daughter, Isla, then 5, didn’t ride in the stroller, but ran along with him.

He thought briefly that it might be time to stop the streak.

This Thanksgiving will mark day number 731.