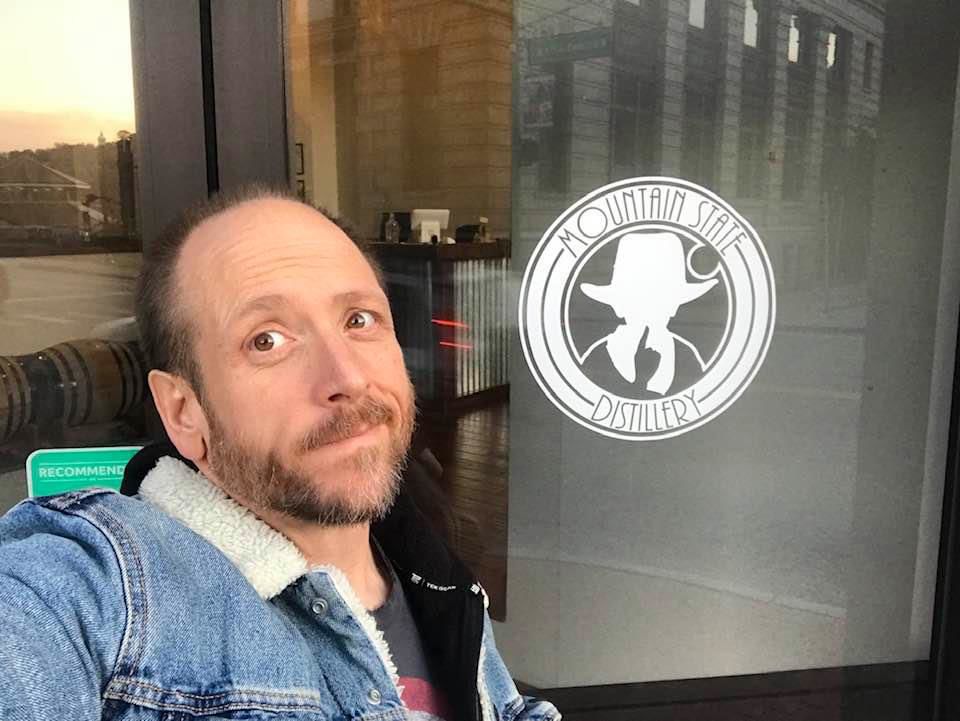 This month, reporter Bill Lynch is learning a little about making whiskey in West Virginia. It’s a slow process and there are fewer free samples than you’d imagine. 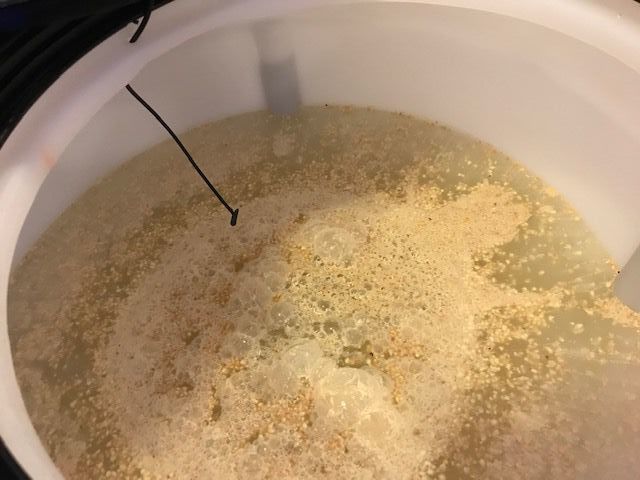 Whiskey begins humbly with a slimy mix of grains, sugar and water. After about a week, it looks a little like breakfast cereal left out on the counter all day. It gets better.

This month, reporter Bill Lynch is learning a little about making whiskey in West Virginia. It’s a slow process and there are fewer free samples than you’d imagine.

Whiskey begins humbly with a slimy mix of grains, sugar and water. After about a week, it looks a little like breakfast cereal left out on the counter all day. It gets better.

We splashed a jar of clear liquid on the front step of Mountain State Distillery at the top of Capitol Street in Charleston.

Well, Jeff Arthur, the owner of the distillery, had the jar, but I was with him, looking over my shoulder at the headlights of the evening traffic on Kanawha Boulevard oozing by. I wasn’t entirely sure what was going to happen or how this was going to go over if anyone with a badge showed up.

Jeff, excited and maybe a little bored on a Monday night, had brought me outside to show me something — a trick. Outside the glass door, the moonshine maker crouched down to the spreading puddle and flicked the wheel of his cheap lighter, while I waited for the very worst to happen.

My month learning about making whiskey was off to a slow start, though not because of any one reason. Making whiskey, including moonshine, is slow.

The week before, I’d watched Jeff mix water, crack corn and barley with sugar and yeast, climb a step ladder and dump the whole mess into a heavy plastic vat.

That was about all we did except meet with the manager of Vino’s to see what he thought about keeping Mountain State Distillery’s products on their liquor shelf.

The short answer was that they already had a bottle. They even kept it on the top shelf, which is about as good a placement as you get.

I’d returned to the craft distillery a week later, and Jeff got out the step ladder and invited me to take a look inside the vat.

It wasn’t very pretty. The bottom of the vat looked like a long weekend of salmonella poisoning, but it smelled a little like my $5 Goodwill bread machine, which isn’t unpleasant. The ingredients Jeff used to make whiskey weren’t that far off from what I used at home making adanama bread.

“Some of the guys who do this on their own, they’ll use bread yeast,” Jeff said. “They’ll hit Kroger and buy those little yellow packages of Fleischmann’s Yeast.”

There was no shame in it.

Standing on a step ladder, I watched the mash bubble.

“The carbon dioxide is a biproduct of the yeast,” Jeff said. “That’s what causes the bubbling.”

The yeast consumed the sugar and then excreted the alcohol and the gas. Both are waste products, Jeff said, though he used common terms that would earn me all kinds of letters and emails if I used them in the Sunday paper.

I shrugged. I guess I liked mine on the rocks.

“So, how long until we can distill what’s in the vat?” I asked him.

Jeff thought about it for a minute, but then said probably the following week.

“It could go a little faster,” he said. “But probably next week. It takes between 10 and 14 days most of the time.”

During warmer weather, the yeast worked a little better. As it got cooler, it worked not as well.

During the cold, Jeff said he’d sometimes circle his vat with boxes and try to warm the area up with a space heater.

He could also speed up the process by adding more yeast, but it wouldn’t make that much of a difference, since the yeast was also reproducing in the mash.

“So, you’re drinking that, too,” Jeff added.

I rolled my eyes. Fine. Alcohol is gross, I told him, but people eat lots of gross things. Cheese came to mind.

“But it sure is tasty,” he agreed and then said, “We’ll get into actual distilling next week.”

In the meantime, there was a lot of dull, business stuff to do. Jeff didn’t find that part of the job interesting, just aggravating and necessary.

He was hoping to expand his product line to include moonshine pickles and moonshine cherries.

“A lot of moonshine distilleries do pickles or fruit,” he said.

“But pickles?” I asked. “What’s that going to taste like?”

I’m a pickle fan. Over the past year, as I was trying to drop a few pounds, I looked for foods that were filling, flavorful and low in calories.

A crisp, kosher dill pickle is right at 20 calories. Your average jar of pickles is about 200 calories of salty, crunchy goodness and just try to eat an entire jar in one sitting.

About his moonshine pickles, Jeff promised me, “They’re good. They taste just like a pickle, but they’ll get you drunk off your a--.”

He offered to open up a jar.

“I’ve got to drive home,” I told him weakly. It was a school night, and I had to get up in the morning.

Jeff shrugged. They could wait. The pickles weren’t going anywhere.

In order to sell his moonshine pickles, Jeff needed to wade through a couple of different permits from the federal government. He had to submit the recipe, basically. He also needed to get a permit for the label that would go on the side of the jar.

All of this was necessary, but still aggravating.

Some days Jeff felt half strangled by red tape of one kind or another.

“The city has been great,” he said. “They seem up for about anything, but the state’s laws are so backward.”

Jeff wanted to be able to do what craft beer and small wineries can do — sell his product by the individual serving at his shop (sell drinks), sample and sell his product outside of his distillery (like wine and beer tastings at stores and markets) and also sell directly to local bars and restaurants.

Currently, in order for a bar or restaurant to buy local whiskey, they’re supposed to go through very particular channels and have to order it special.

Of course, local wine and craft beer are still relatively new to West Virginia. Both markets have exploded over the last decade or so.

It wasn’t that long ago that craft whiskey was the stuff sold out of the trunks of cars. Making and selling it could get you sent to prison.

In between making batches and bottling, Jeff was looking at laws passed in other states with craft distilleries and hoping to pass the information on to friendly politicians who might take an interest in developing the craft whiskey industry.

It was a lot to weed through. Meanwhile, there was whiskey to make.

Jeff said I’d missed out on distilling the last batch of mash. Over the weekend, he’d processed several gallons.

Whiskey comes out distilled in three parts, he explained —- the head, the heart and the tail.

“It has all the methanol,” he said.

Essentially, that’s rubbing alcohol. It could probably kill or blind you if you had enough of it.

The heart is the good stuff, what you want, and the tail is what’s left. The tail can be saved, but it has to be filtered for impurities, which affects the taste and flavor of the alcohol, plus it needs to be enhanced with some of the good liquor.

“The tail has more water in it,” he said.

The heart whiskey is about 100 proof — though, with additional distillation, Jeff can ratchet the proof up to 180 if he wants. The tail is about 20 proof.

Jeff let me sniff jars containing each liquid. They all looked about the same — as clear as ice water.

The heart smelled like moonshine. It was strong and made my eyes water. The head wasn’t quite as strong, and the tail smelled a little yeasty.

Then Jeff took the head jar and said he wanted to show me something. I followed him outside, where he splashed the bad whiskey on the ground and tried to light it.

“This is garbage,” he said.

Finally, he went back inside and brought out an unlabeled bottle, uncorked it and poured some on the sidewalk.

“This is the same stuff,” he said. “It’s just from a different batch.”

It lit easily, produced a blue flame that danced between the bricks on the walk. I looked at it nervously as it continued to burn.

“Are there any gas lines around here?” I asked.

“Not a one,” Jeff said. “The building is all electric.”

He sighed. Gas would be cheaper.

After a minute, the flame died out and we went back inside.