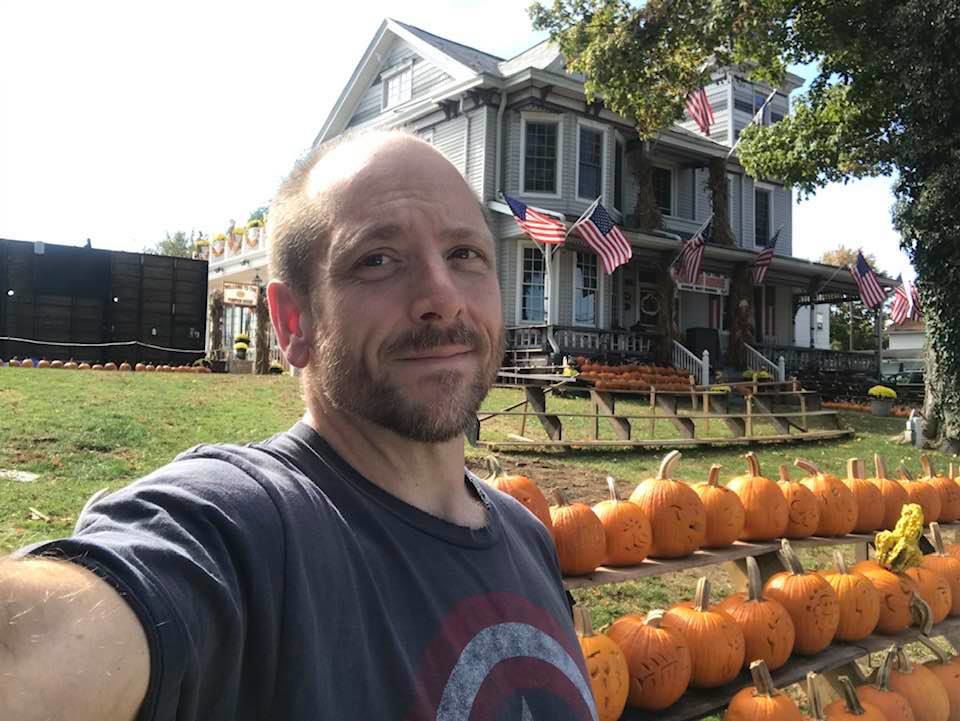 Reporter Bill Lynch finishes up his month of spooky exploration with a very non-spooky visit to the Pumpkin House in Kenova. 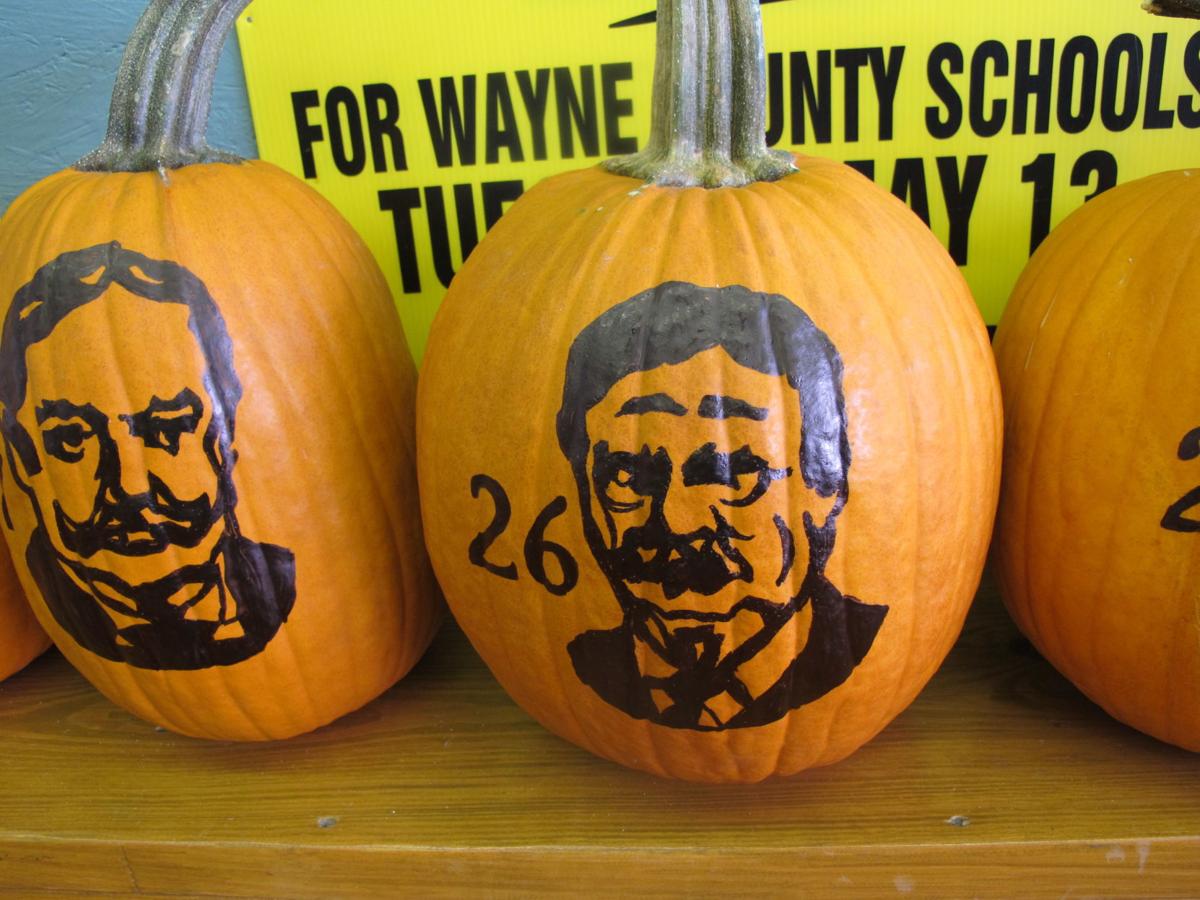 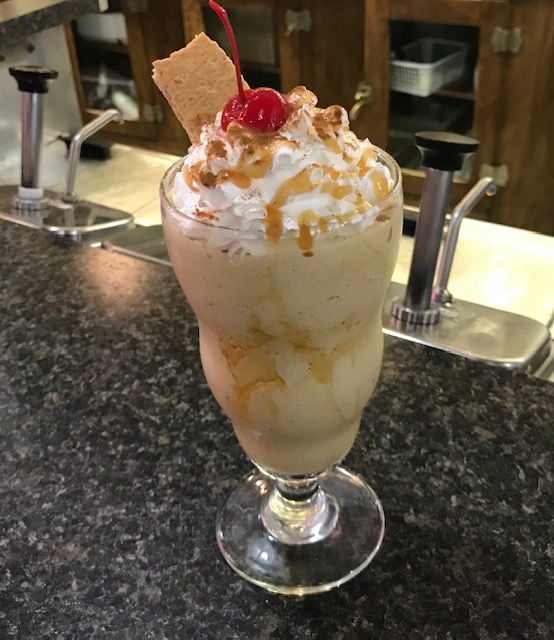 The best Halloween adventures end with treats, like this pumpkin roll milkshake from the Griffith & Feil Pharmacy soda shop in Kenova.

Reporter Bill Lynch finishes up his month of spooky exploration with a very non-spooky visit to the Pumpkin House in Kenova.

The best Halloween adventures end with treats, like this pumpkin roll milkshake from the Griffith & Feil Pharmacy soda shop in Kenova.

Of all the places I expected to wind up by the end of my second shot at exploring the spooky side of things, a vintage soda shop — a rock’s throw from Kentucky — wasn’t on the list.

But maybe it should have been.

This month of spook shows, haunted amusement parks and monster memories began with an over-the-top “Children of the Corn” milkshake at I Scream Sundae in Ripley, while the so-bad-it’s-almost-good B movie “Killer Klowns from Outer Space” played behind me.

Why shouldn’t it end with a no-less-stellar (though certainly less dressed up) pumpkin roll milkshake at Griffith & Feil Pharmacy in Kenova?

Both were seasonal flavors, handmade and connected to West Virginia attractions.

I Scream Sundae supports the Go Go Scare Show. Griffith & Feil is behind the Pumpkin House in Kenova.

I had intended something else, however. I’d meant to check out the Haunted Majestic in Huntington, possibly West Virginia’s only Halloween attraction located on the water. Butch Patrick, the guy who played Eddie Munster on “The Munsters,” was also supposed to be putting in an appearance.

I’d also planned to visit the haunted corn maze at Cooper farm in Milton. I’d gotten lost (and sunburned) in the non-spooky version a couple of times. I wondered how I’d manage while being chased by a lunatic with a chainsaw.

Both of those will have to wait.

Two weeks ago, I sprained my right knee while running along the Kanawha River — just took a bad step somewhere and, ouch. It took me days to get beyond a very ginger limp. I’m still kind of hobbling around, sidelined from running, jumping or clogging.

Being chased across corn-cob-strewn terrain or stumbling through dark corridors while evil clowns or zombies lunged at me probably doesn’t fit in with my recovery, so I thought I could dial down the spooky and maybe just focus on something less physical, like pumpkin carving.

Back to the Pumpkin House

Kenova’s Pumpkin House has been a semi-annual pilgrimage for me for years. I’ve gone when there was a chill in the air and the dark sky was dumping rain and I’ve been when the night was perfectly fall.

I went in the middle of a Monday afternoon, only a few days before the Pumpkin House was scheduled to open. The sun was shining, and the temperatures were an unseasonably balmy 85.

Out back, a crowd of kids in costume were busy pulling the guts out of pumpkins.

Among them was a kid dressed as Darth Vader. Another was a pink unicorn. The unicorn seemed to be having the better time.

Behind the garage, a teenager (supervised by an adult) used a reciprocating saw to cut through the hollowed-out pumpkins. He traced simple designs drawn on the orange shells. When lit in the dark, the lines would reveal glowing faces, animals, symbols or words.

After he was finished, the teenager rinsed the grisly gourd with a garden hose and then was told to drop it in a tub with chlorinated water, where it bobbed and floated, along with the rest.

“It slows down the rotting,” the supervisor explained with a shrug.

Then they moved on to the next pumpkin.

I met Ric Griffith, the owner, proprietor and creator of the Pumpkin House, next to the costumed kids in plastic aprons busily clawing through sticky pulp and seeds. He had no idea I was coming, so he was busy supervising, directing and trying to avert one crisis or another. But he didn’t mind if I followed along behind him.

Ric frowned and added, “But I’m going to lose a couple of hundred to this heat. We always lose some.”

President Donald Trump, Ric said, might not believe in global warming, but he did. In the 30 years or so he’s hosted the annual attraction, Ric said they’d gone from needing heaters in the yard to keep volunteers warm to sweating in T-shirts as they worked.

“It’s just too warm,” he said and began looking for rotten pumpkins.

They weren’t hard to find.

In the back of the house, the pumpkins waiting to be carved sat on rafts of wood pallets. Designs had been drawn on some of these pumpkins. They were just waiting to be processed and carved.

One row was made up of pumpkins destined for the 48-foot-long, 11-foot-high musical wall that separated the back and front yards of the property.

Each of these pumpkins had a particular place that it needed to be.

Ric pulled a rotten and moldy pumpkin free from the line and then picked replacements from the untouched stock. Quickly, he copied the design from the ruined gourd, noticing too late that the replacement was going bad, too.

He sighed and put it aside. Ric would take care of it again later.

“Each year we do this,” he said. “It’s about how we don’t think we can get this done in time, but yet still manage.”

It wasn’t unusual for volunteers to continue adding or replacing pumpkins after the Pumpkin House officially opened.

Carved pumpkins are like any other vegetable. If you cut into them, they’re going to get slimy after a few days.

But there were little tricks to slow the process. The line drawings on the pumpkins look good, for example, but they were also functional. Ric said the more damage you did to a pumpkin, the faster they’d go downhill.

There was nothing Ric could do about that.

After a while, the kids in costume boarded a YMCA bus and left, but not before Ric thanked them for coming and told them that it was because of people like them that they were able to have the Pumpkin House.

Ric said they’ve been lucky they’ve gained volunteers at the same pace as the growth of the Pumpkin House.

“We couldn’t do this without them,” he said.

Ric said they get around 1,000 people who volunteer their time. Most of them donate just a few hours. He said they get school and civic groups who sometimes show up by the busload. Other times, people walk in off the street asking to be put to work.

“There’s a sense of pride here,” he told me.

Ric started this quirky, little festival celebrating the fall season, but he said it doesn’t entirely belong to him anymore.

The ownership is something different than owning property. It’s connection to an idea or a mood.

After the kids left, he took me along for a tour inside his very lovely home, which was — by his own admission — almost a museum.

He walked me through different rooms and told me stories about his father and uncle as he pointed out family heirlooms and treasures. Some of the memorabilia was probably worth real money, but none of it was the kind of stuff worth stealing.

Your average thief isn’t going to have any idea what to do with a 250-year-old clock bolted to the wall or a receipt containing the signature of a Civil-War-General-turned-president.

Besides, the clock needs a little work, Ric said. It wasn’t keeping correct time, though he sometimes forgot to wind it, he said.

Most of the heirlooms had been paid for through time and adventure, but Ric said the family pharmacy paid for the pumpkins.

It was a nice place, if I wanted to take a look.

“It’s just on your left when you’re coming this way,” he told me. “We have an old-fashioned soda counter there. We mix our sodas there, like they used to do in the old days.”

I couldn’t remember the last time I’d been in an old soda shop. I promised I’d check that out as I left — and I did.

It wasn’t out of my way at all. For about 15 minutes, I sat at the counter and drank a pumpkin roll milkshake that had been made as I watched.

They served it in an old-fashioned soda glass with a generous dollop of whipped cream and the fattest cherry they could find.

It was pretty amazing.