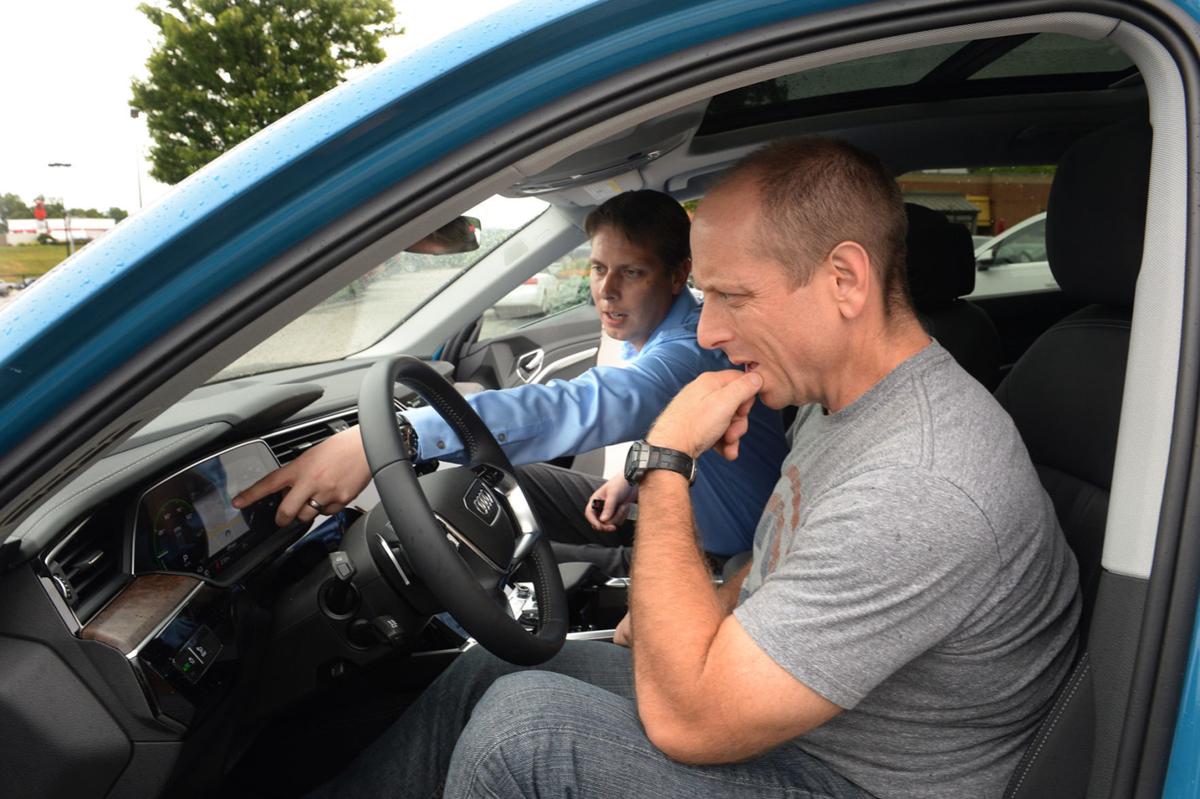 Audi car dealer Jasper Elberink explains some of the features and controls of the Audi e-tron, an electric SUV the car company put on the market just a few months ago. Reporter Bill Lynch took a test drive and then added the vehicle to his Christmas wish list. 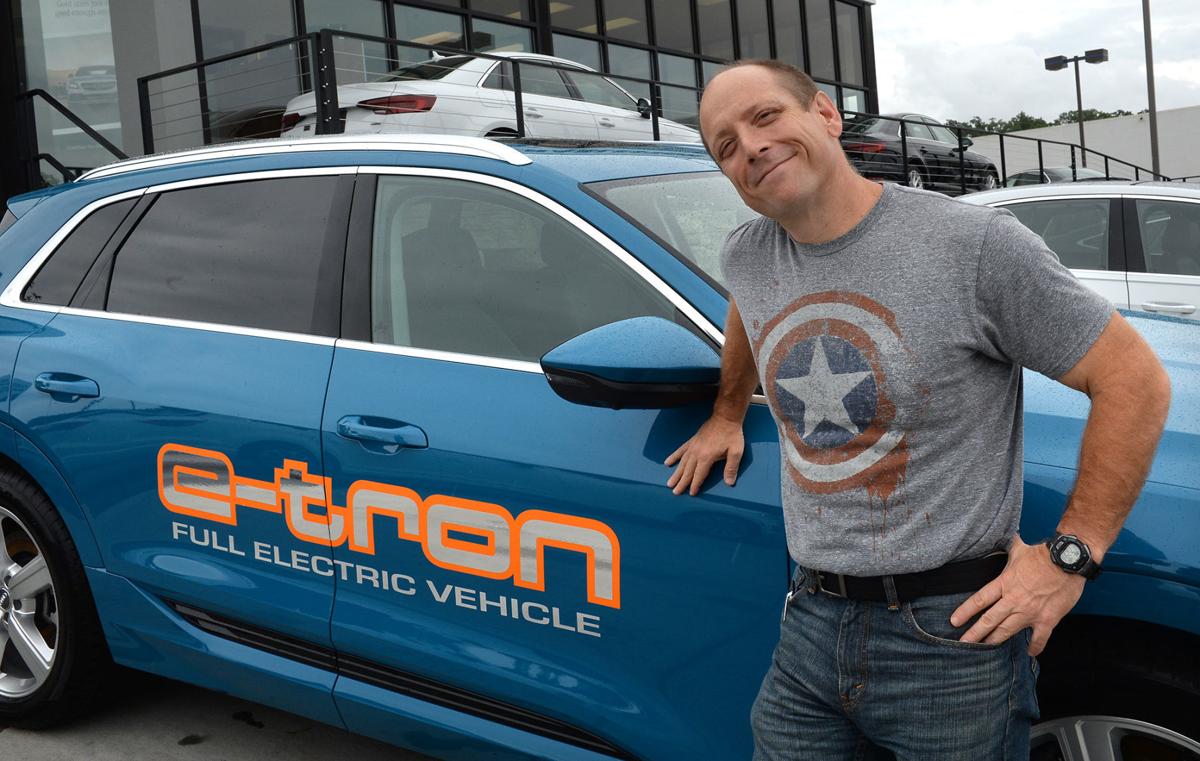 The Audi e-tron SUV is one of the new electric vehicles to hit the car market. It’s a competitor to Tesla, whose cars aren’t for sale in West Virginia. 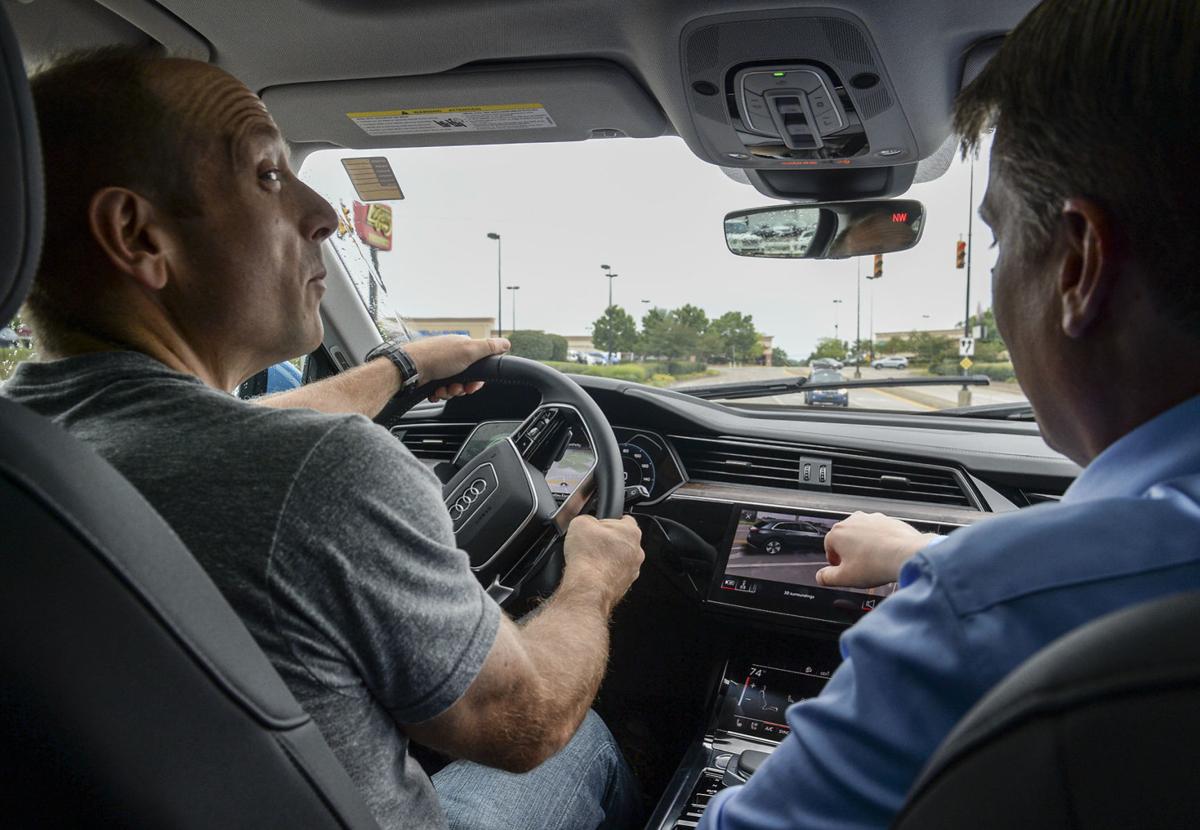 As part of his month learning about ways to reduce his impact on the environment, reporter Bill Lynch tested an e-tron from Astorg Auto in Southridge. Electric cars create less pollution and use cleaner fuel than tradition vehicles.

Audi car dealer Jasper Elberink explains some of the features and controls of the Audi e-tron, an electric SUV the car company put on the market just a few months ago. Reporter Bill Lynch took a test drive and then added the vehicle to his Christmas wish list.

The Audi e-tron SUV is one of the new electric vehicles to hit the car market. It’s a competitor to Tesla, whose cars aren’t for sale in West Virginia.

As part of his month learning about ways to reduce his impact on the environment, reporter Bill Lynch tested an e-tron from Astorg Auto in Southridge. Electric cars create less pollution and use cleaner fuel than tradition vehicles.

Tim Bailey leaned forward and studied the contents in the little cubby in the front console of his Tesla.

“Hmm,” he said, and stuck his right hand into the open space. He fished out a couple of pens and a set of keys.

“I better move them before they come flying back,” he said, and shifted the odds and ends into another compartment.

A few moments later, driving on a deserted stretch of empty pavement, Tim looked over and said, “Watch this.”

Then he stomped the accelerator. The Tesla Model S shot forward like a missile, going from zero to 60 in about three seconds. The force pushed me back in the seat. My stomach dropped to the floor and I thought, “I think I’m going to die.”

It would have capped off a pretty lousy week, but I didn’t die.

This was my first ride in an electric vehicle outside the bumper cars at the state fair.

Plugging in to electric cars

I’ve been a little interested in electric cars since they began rolling off the assembly line, but this month of trying to learn more about being environmentally friendly gave me my first opportunity to ride in one.

I find it baffling that West Virginia hasn’t embraced electric cars. What’s not to like about a car that gets its get-up-and-go from Appalachian coal or natural gas instead of imported crude oil?

But Tesla can’t sell cars in West Virginia. The nearest Tesla dealership is in Columbus, Ohio. I’ve seen a few vehicles around the city, though, and the number of local charging stations keeps growing.

Other than science fiction-y coolness, electric cars are supposed to be better for the environment. I’ve read a few arguments about how their special batteries made them bigger polluters, but those arguments were generally swatted down.

Electric vehicles aren’t 100 percent clean, but neither is a bicycle. Drawing electricity from the power grid is better than fueling up with unleaded for $2.79 a gallon.

Electric cars generate almost no air pollution. They don’t even make much noise. Distracted pedestrians have been known to walk into the path of electric vehicles in parking lots.

Electric vehicles don’t need oil changes, don’t require anti-freeze and probably don’t use as many pine tree air fresheners to keep the inside of the car smelling wintry fresh.

Why not walk or ride the bus?

For my month of going green, I looked toward electric cars because I already understood the impracticality of other forms of eco-friendly travel.

Public transportation quickly becomes inconvenient and unforgiving if you don’t live in city limits, which I don’t.

I live near Elkview, and the bus that travels within half a mile of my house only comes up this way a few times a day — and God help you if you’re late to the stop or the driver is trying to make up lost time and blows through early.

Walking or cycling to work might be good for my heart, right up until I got mowed down by a passing car.

The road leading to Charleston isn’t meant for pedestrians. In winter, it’s barely meant for cars.

Sure, I could have asked about working from home, you know, for the environment, but that would go over like a lead balloon.

I knew Tim through CrossFit WV, and he’d been nice enough to let me check out his Tesla when I asked about it.

After the demonstration of speed, Tim showed me the never-ending parade of bells and whistles that came with the car. (This includes an arcade and what I presume was the “romantic getaway” mode, which generated a high-definition video of a roaring fire on the car’s front touch screen. It would probably look nice from the backseat.)

We went to the local Tesla charging station, where he showed me how easy it was to power the car up. Then he let me drive back.

I was a little nervous about being behind the wheel of a vehicle worth almost as much as I owe on my house.

My mortgage is currently right at $82,000. The MSRP for a new dual-motor long-range Tesla starts at $72,615, plus taxes, fees and whatever extras you fork out for — like a recharging package or maybe a death ray.

Driving Tim’s Tesla was what I imagined it would be like to be behind the wheel of a land speeder from “Star Wars.” The ride was smooth, quiet and steady.

Tesla makes more expensive versions of this car, and they also have the more affordable Tesla Model 3, which starts at around $35,000.

Prices for electric vehicles are coming down. While you can’t get a Tesla at a dealership in West Virginia, you can get something else, like the Audi e-tron SUV.

Tim told me about it, and the folks at Astorg Auto — a luxury car dealership in Southridge — were nice enough to let me try one.

Jasper Elberink, the Audi dealer who showed me the e-tron, said the biggest difference between Tesla and Audi was how the two companies approached the idea of electric cars.

“Tesla has a lot of flash,” he said. “They put so much effort into making their electric car look cool.”

You could not play “Missile Command” in an e-tron or cuddle up with someone special while you gazed into a digital fire, but Jasper said it was hard to beat Audi’s 100 years of experience.

Audi took the idea of the electric car and applied the technology to the kinds of vehicles they already make, what their customers already like.

Both the Tesla and the e-tron work about the same. Each relies on a battery and a regenerative braking system that helps make the vehicles more energy efficient. It uses the resistance and gravity to supplement charging. You get a little power back when go down hills, for example, which helps offset going up those hills.

At a charging station, Jasper said the e-tron can power back up to 80 percent in half an hour.

A Tesla can do about the same thing at a Tesla supercharger station in about an hour, Tim told me.

Both vehicles can be charged at home, though its achingly slow — like, less than 20 miles worth of power for every hour spent charging.

For local driving, that’s probably not a big deal. You just plug the car in after work and let it charge through the night. There’s no reason to keep it fully charged all the time if you’re only going 20 or 30 miles in a day or less.

The e-tron handled differently than most SUVs. I’ve always found them kind of clumsy, but the e-tron seemed downright agile, like a much smaller car.

“It weighs more than a traditional SUV,” Jasper explained. “But the center of gravity is different.”

Like Tim’s Telsa, the SUV had two motors working together, which even combined were much smaller than a full-sized car engine. The battery was centered underneath the car.

The e-tron could also move fast, going from zero to 60 in not much more than three seconds, which impressed me, given its size.

I’m not a fan of big vehicles, but this one was fun.

Jasper told me that Audi was committed to bringing more electric vehicles to the market. They had other models lined up for next year and beyond, and the parent company was pushing for more charging stations, though he wasn’t sure if all electric vehicles would replace the traditional combustion engine.

The technology is still developing. Electric vehicles are still pricey. The e-tron was in the same price range as the Tesla Model S, and everybody wants batteries to last longer and charge quicker.

Tim thought all of that would come. His current Tesla was a big improvement over his last. It could go farther, longer and faster.

“They’re always working on it,” he said.

Back at the ranch ...At my home, the garbage was piling up in the backroom — not the garbage, really, the bags of stuff that needed to be taken to the recycling center.

The amount of actual garbage I put at the curb Wednesday mornings had dropped from three or four bags to one full bag a week.

That felt like an accomplishment, but I knew I could probably get that down to barely one full bag a week, if I really tried.

Through this little exercise, I noticed some truths I’d ignored. I drink a lot of diet soda, and while I brag about not eating a lot that comes in a box or bag, I open a lot of cans.

There were also an awful lot of plastic shopping bags. Despite having five reusable grocery bags, which I mostly remembered to bring to the store, I’d still accumulated a bale of plastic bags.

Clerks just handed them over. Sometimes, they bagged my purchases in plastic and then put them inside my reusable bags.

I gave up on shopping local for much of my food. Getting to the market during business hours was difficult.

Also, while farmers market veggies sometimes tasted better, grocery store produce was generally cheaper, and I could find all my favorite comfort foods without any trouble. I didn’t have to make do with only one type of apple or eat peaches when I really wanted an orange.

I am terribly spoiled.

And this is at the heart of the problem with living a life that’s better for the environment. It’s easy not to, and if you want to “be green,” you have to figure out what you want to give up.

For me, I can keep using my reusable shopping bags and recycling my leftovers. I can be a little more conscious of the things I buy. I can turn off lights I don’t use and be more mindful of how much I drive — and if electric vehicles ever get in my price range, I’ll get one.

Though it will probably be used.