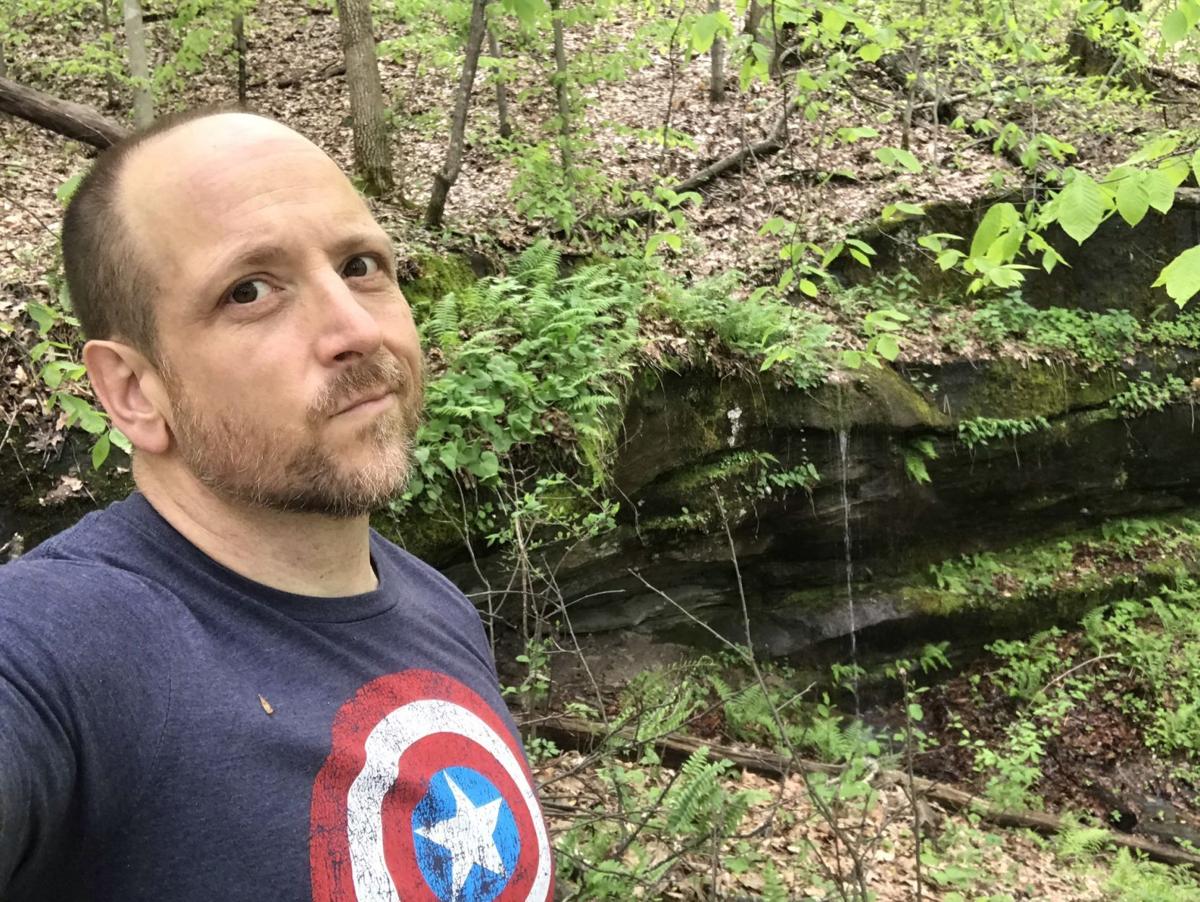 Behold the majesty of Hemlock Falls in the Kanawha State Forest. 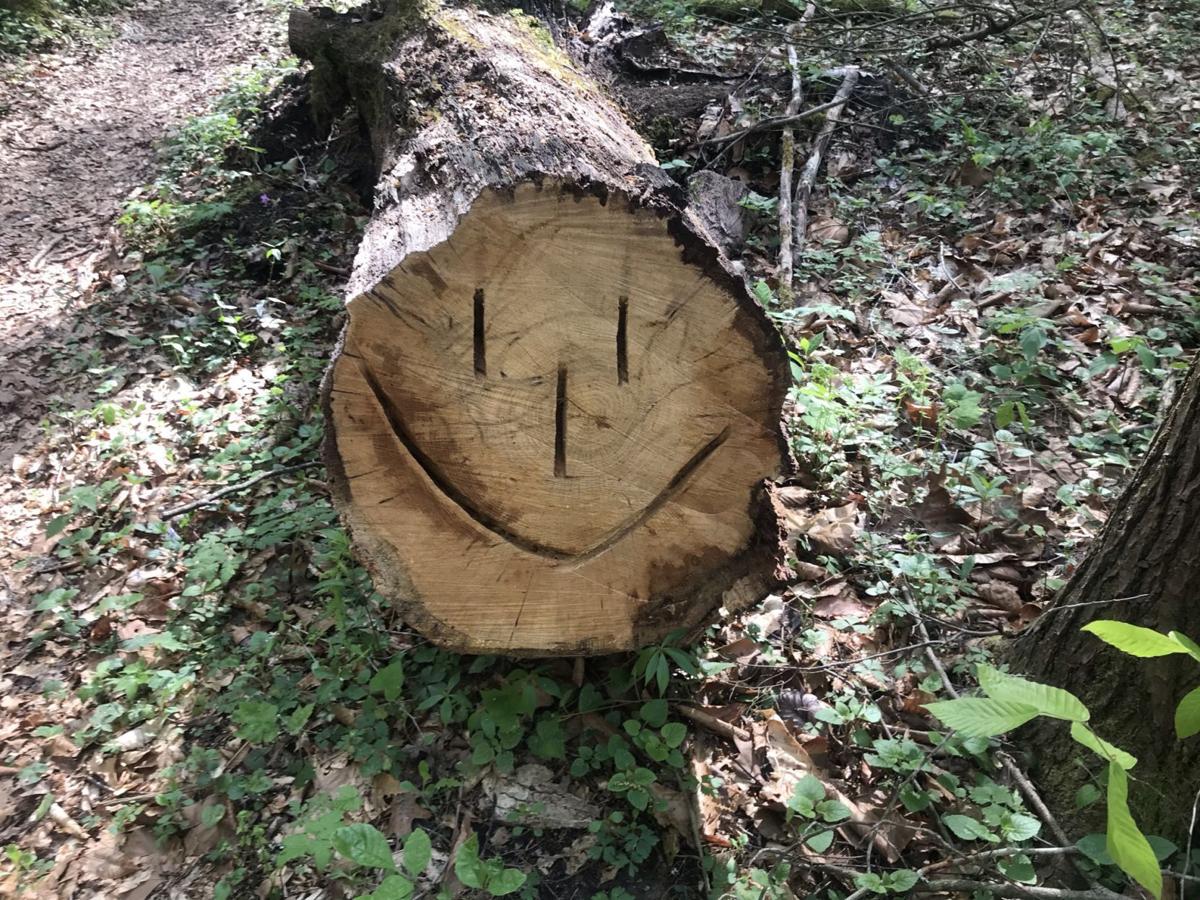 You can discover all kinds of things in the forest — like what happens when park rangers get bored. 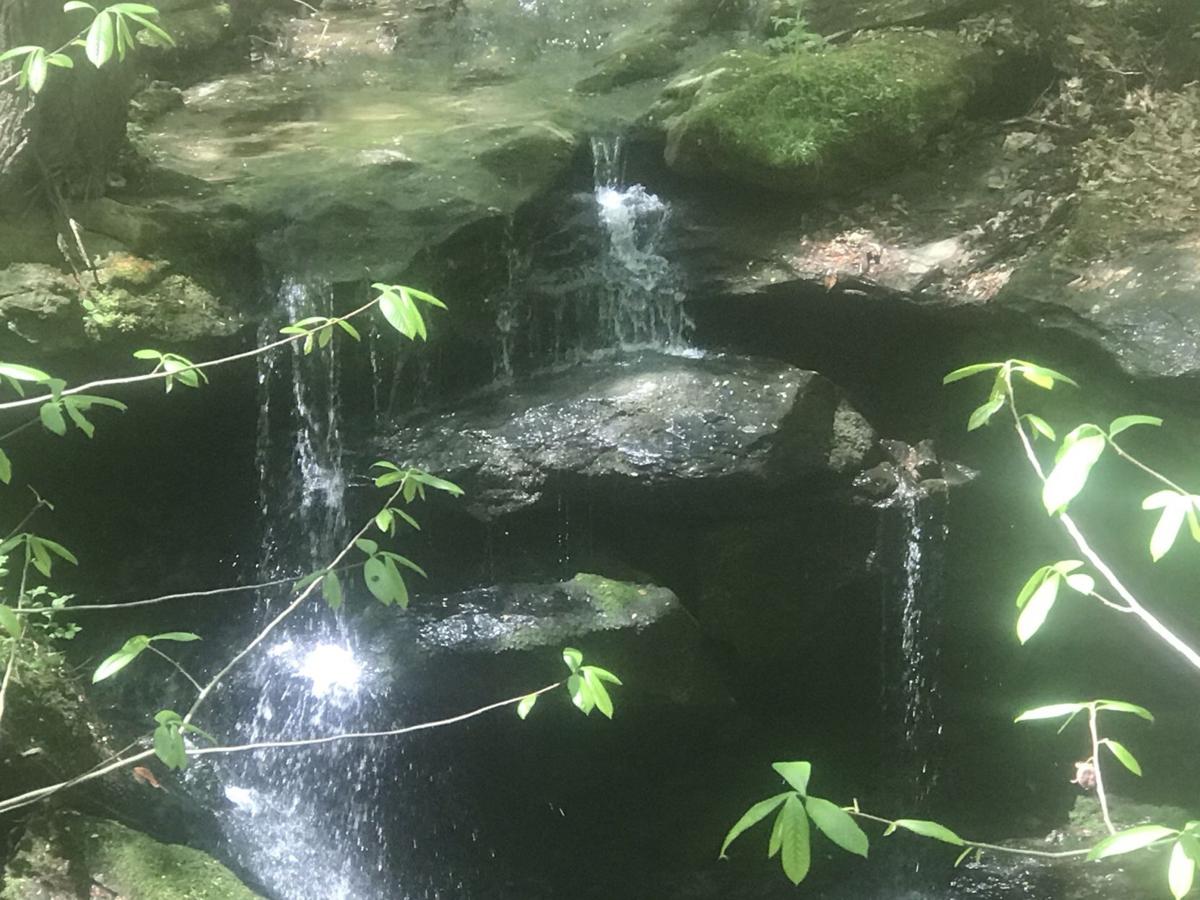 Yes, there are magical spots hidden in between civilized spaces, but reporter Bill Lynch refuses to tell you how to get to this one because he doesn’t want you to contract Lyme disease or get eaten by a troll.

Behold the majesty of Hemlock Falls in the Kanawha State Forest.

You can discover all kinds of things in the forest — like what happens when park rangers get bored.

Yes, there are magical spots hidden in between civilized spaces, but reporter Bill Lynch refuses to tell you how to get to this one because he doesn’t want you to contract Lyme disease or get eaten by a troll.

The old man raised his hand and hailed me as our paths merged. He and his wife looked as surprised to see me as I was to see them.

It was the middle of a Friday afternoon, but still a business workday. Not many people seemed to be around Kanawha State Forest.

On my way to find the Polly Trail, I’d spotted a few cars with out-of-state license plates. I’d driven past a woman and a small boy running through one of the park’s playgrounds and saw a few people enjoying a late picnic lunch.

The Polly Trail was what I needed to walk to get to the trail that would lead me to Hemlock Falls, one of a handful of waterfalls I’d heard about in Kanawha County. It hadn’t been an easy hike, but part walk, part crawl and part audition for “American Gladiator.”

Old tree trunks and boulders laid across the trail here and there. I’d had to climb over or under to keep moving forward, but after a mile and a half in, I hadn’t expected to see anything other than a few squirrels.

“Hello there,” the man said. “Where you headed?”

I shrugged and explained that I was a newspaper columnist. Through the month of May, I was exploring waterfalls in West Virginia. I’d heard about Hemlock Falls at Kanawha State Forest through a website and decided that I ought to go see it.

The website had given me several other falls to see, some of them practically hidden from sight, which was exciting and made me feel a little like a modern urban explorer.

The old guy shook his head.

“There’s maybe not a lot to see this time of the year,” he said, doubtfully.

I understood. My friend Jamie, a forager, amateur botanist and wilderness adventurer, warned me about going, advised against it. She’d been all over Kanawha State Forest.

“All I ever see up there are wet leaves and very little water,” she told me.

Jamie said there were plenty of better places to go. She was willing to show me, but I wanted to see Hemlock Falls. It was close to home.

It seemed a shame to not go take a look.

And I was excited about seeing something new at Kanawha State Forest. I’d come to the state park dozens of times but had scarcely gone beyond the trails near the visitors’ center.

I was committed to the journey, I explained to the hiker. Besides, I’d already come this far.

He sighed and said, “Well, first off, you’re going to want to turn around and go take a right back at the crossing over there.”

I shook my head and laughed.

It was lucky I’d bumped into him, I said. Otherwise, I might have wound up in Kentucky.

Clearly, reading maps is not a strength for me and I have a long and storied history of getting lost. Even with good directions and GPS, I’ve been known to turn a pleasant two-hour drive into a soul-crushing, four-hour odyssey.

But I thought I’d be OK this time. I’d studied a map, talked to a park employee about where I needed to go and I’d had some luck finding another waterfall earlier that same day.

Before I’d come out to Kanawha State Forest, I’d gone looking for a waterfall inside of Charleston.

The fall was located not far from a school, hidden by trees and brush.

The website told me it would take about five minutes of following the creek to get to the waterfall.

I did it in 15, but there were a lot of weeds and the banks of the creek looked like the sort of place where mobsters lose evidence.

Still, the little waterfall, sequestered away in a residential neighborhood, was a nice surprise. It reminded me of something out of a fairy tale, a hidden piece of wild magic that was beautiful, but probably infested with snakes, spiders and maybe a storybook troll.

After I got the trail tip from the elder hiker, I continued further up the hill. The Polly Trail connected to the Wildcat Trail and then to the Beech Glen Trail.

The trail widened a little. I crossed through streams, saw tracks left by bicycle tires and walked on, sure that the falls were just another hundred yards.

A mile and a half turned into two miles, two and a half miles, and then around three miles before I came to the Hemlock Falls trail.

Weary, muddy and thirsty, I pushed on — and finally came to an overhang of rocks with a thin stream of water pouring off and falling into a shallow, leaf-choked pool below.

It was hard not to feel somewhat let down.

I watched the water for a moment or two and then wondered if maybe this wasn’t actually the place. I didn’t want to turn around only to find out later that the real Hemlock Falls was another hundred yards up the trail, so I pressed on.

But nope, the trail ended a few yards up the hill. On a tree, I found a plastic, yellow triangle nailed to the trunk. Hand-lettered, it read “Hemlock Falls.”

Weary and completely let down, I sat down on a flat rock and laughed. Nobody in their right mind would come up here just to see this.

And here I was.

At least it was a nice day to be outside. I had all the time I wanted to just think.

After a short rest, I started down, trying to get to the bottom of the trail quicker than it took me to get to the top. I thought if I could get to my car and get out of the park before six, maybe I could stop by Sarah’s Bakery on the way back into Charleston and get a brownie.

I thought I probably still had three bucks in credit from Valentine’s Day and I felt like I deserved at least a brownie, but it was getting late.

I made pretty good time, but still missed business hours by a wide margin.

No brownie for me.

So, I drove home, shucked off my sweaty, muddy, smelly clothes and then threw on something warm, dry and clean. I made dinner, drank half a gallon of water, and sank into the comfort of my couch to watch “The Great British Baking Show.”

The show is a fascinating competition where everyone is very nice, the ultimate winner gets a glass cake plate as a prize and all the losers leave the show with a hug.

It is the most foreign thing I have ever seen.

Halfway through the first episode, I felt the pitter patter of little legs scrambling along the back of my arm. I jumped up, flicked a tick off my skin, grabbed a shoe and slammed it down on the bug like I was hammering a nail.

Groaning, I ran to the bathroom, pulling off the fresh clothes and tossing them into the washing machine along the way.

In front of the mirror, I surveyed my hairy body, looking for suspicious specks and anything moving. I should have checked for ticks as soon as I got home. I grew up near the woods. I knew better. Ticks carry Lyme disease and there’s nothing good about that.

I pulled a second, squirming tick off the back of my thigh and flushed it, grateful that the bug hadn’t latched onto me yet.

I checked my scalp (easy to do), looked through my ears (harder) and then between each toe. Finally, I checked the one place you’d dread finding anything that didn’t belong.

I gasped, but it was only a little mud.

I turned on the shower to as hot as I could stand, got under the water and scrubbed my skin until I was nearly raw. Then I wandered halfway across the house to get a towel.