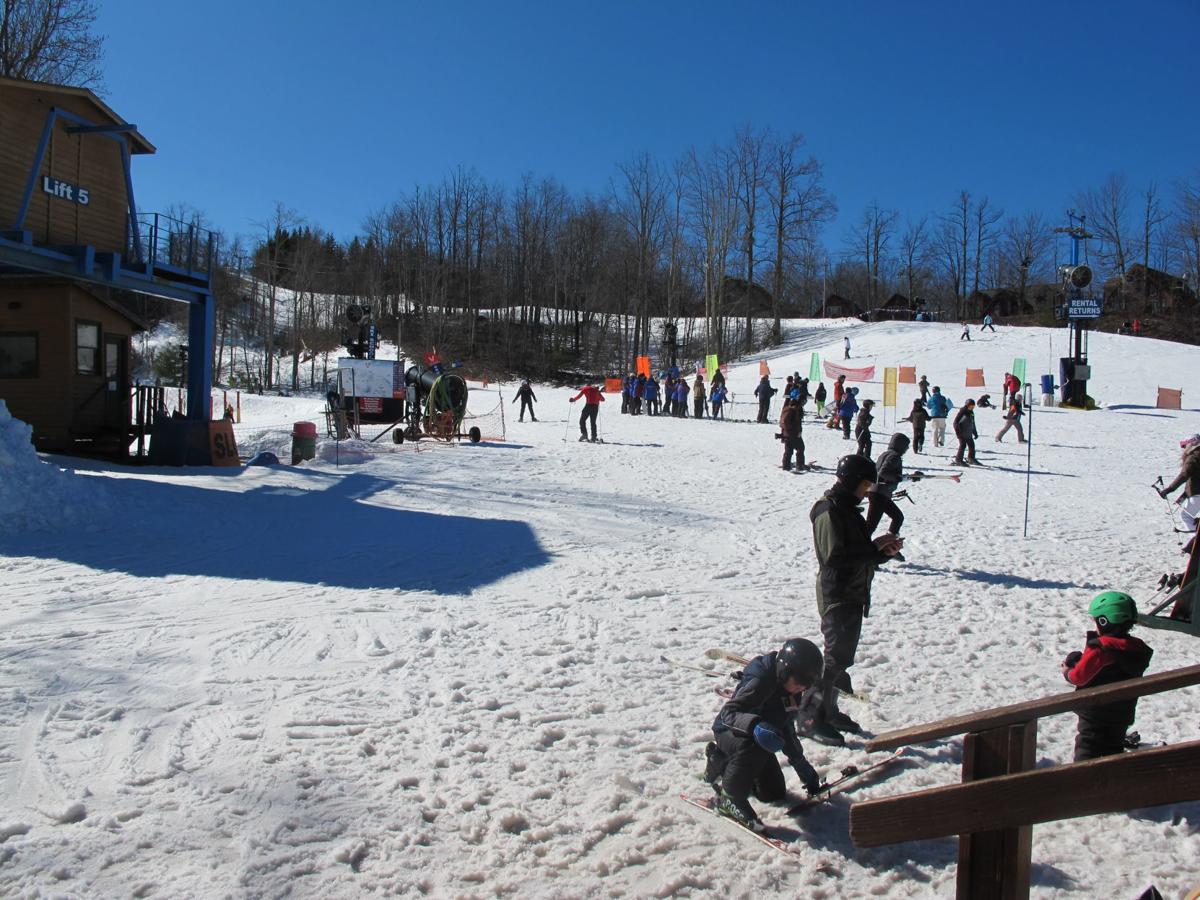 Bill Lynch explores learning to ski this month, first with a trip to Winterplace Ski Resort, in Raleigh County. 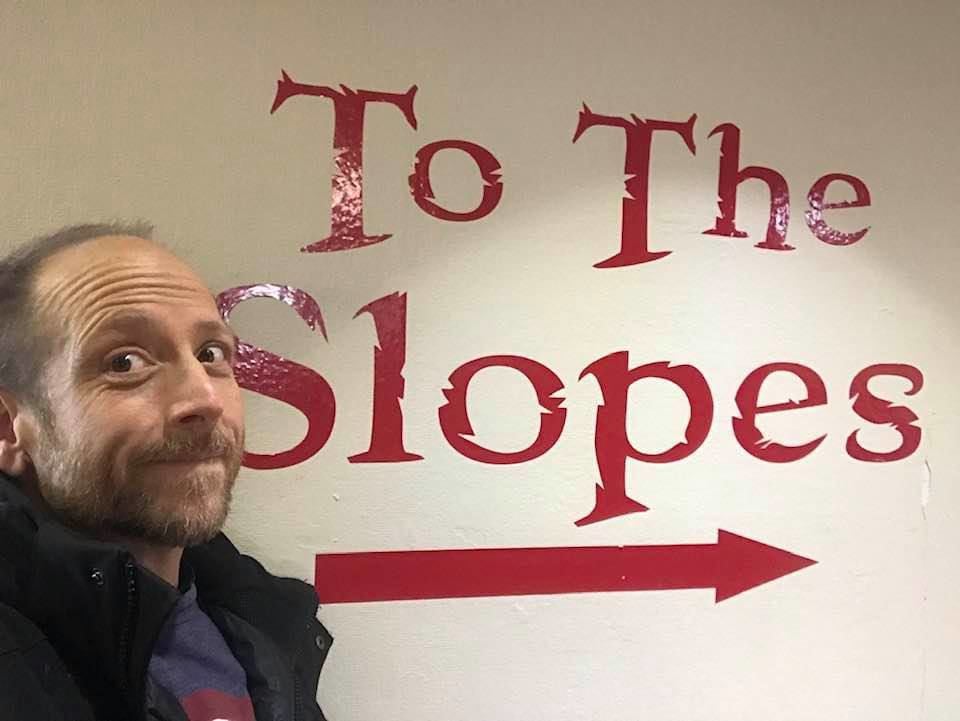 This month, reporter Bill Lynch takes to the slopes, hoping to learn how to ski or maybe just get good at falling down.

Bill Lynch explores learning to ski this month, first with a trip to Winterplace Ski Resort, in Raleigh County.

This month, reporter Bill Lynch takes to the slopes, hoping to learn how to ski or maybe just get good at falling down.

GHENT — Leaning forward, the snow under my feet sped past and I became very aware that I was moving a lot faster than I expected.

“Keep your poles back,” Sandy, my ski instructor, called out to me.

She’d gone ahead and had executed a series of graceful, wide, sweeping turns. She made it look effortless and I was supposed to copy her pattern of whooshes.

This didn’t seem impossible. A few minutes earlier, when we were a little higher up on the course at a gently sloping practice field, I’d (more or less) managed to get to the bottom — if not gracefully, but at least on my feet.

The swoops helped control the speed some. But on this steeper decline, I couldn’t seem to slow down enough, and I couldn’t focus. There was just too much going on.

From the edges of my vision, there were other skiers and brown landscape beyond the man-made snow. To my right, a Spanish-speaking man encouraged his small, frustrated son to not give up. To my left, a teenage girl in a blue snowsuit without poles blew past with a whoop and a holler. Her friends were right behind her, laughing.

There was also a kid with a snowboard, a man and his daughter and some trees ...

And I did, but too fast. Into the turn, I swung around and went tumbling over as graceless as a shot moose. I went limp and covered my face before my head slammed into the snow.

This was the fourth time I’d hit the ground in about 20 minutes — and actually, I was doing better than I’d thought.

This was my first time on skis and after almost two hours outside, I felt pretty good about how things were going. I’d broken nothing and hadn’t crashed into a child.

I don’t have a particularly good reason as to why I never learned to ski. I always meant to, but the chance to actually try always seemed slightly out of reach.

I grew up in Giles County, Virginia, bordering West Virginia and about an hour or so from Winterplace Ski Resort. Through high school and college at Concord University, I had friends who went skiing.

Some of them disappeared every other weekend during the winter months. A couple of them even offered to bring me along, once or twice, but I never went. I was always too busy or too broke to go.

My pocket money in those days tended to get spent on beer and cigarettes.

Later, when I worked at a radio station in Bluefield, ski packages were sometimes available for staff — leftover contest prizes that listeners never picked up. The station gave away a lot of stuff. There were always things left over, but I usually gravitated toward the free pizza coupons.

One winter, I almost took a part-time job at a ski resort, working evenings and weekends. I’m pretty sure free skiing, or at least learning to ski, was some kind of perk, but the day I was supposed to show up for work, my car wouldn’t start.

The resort was pretty understanding about it and told me to try again next week. They were less understanding when the car failed to start the following Saturday.

I thought it was a bad battery, but it turned out to be the alternator. My expected part-time boss was sympathetic, but he needed someone to fry corn dogs and make sandwiches, not someone with an unreliable car.

If I’m completely honest, I figure I was a little afraid of getting on a pair of skis. I was afraid of looking bad and being bad at something else.

Snapping my fool neck was also a consideration, I think.

And then there was the weather.

Whether you believe climate change is a hoax perpetrated by a secret cabal of television weather men hoping to somehow cash in, or you think Charleston is only a year or two away from being the next beachfront vacation destination, it should be obvious that our winters don’t always seem all that wintry.

This year in particular, the daffodils have been pushing up in my flower bed since mid-January and we had one weekend where the temperature in Charleston peaked at over 80 degrees.

None of that seems conducive to sports involving the use of snow.

Joe Stevens, a spokesman for the West Virginia Ski Areas Association said, “We’re in the middle of a snow drought.”

The weather has either been warm(ish) and wet, or cold and dry.

But a lack of naturally occurring snow was no reason to not give skiing a try. The three active ski resorts in West Virginia can make their own snow, and while that sounds a little weird, it still gets the job done.

“It has to,” Stevens told me. “Skiing is a multimillion-dollar industry in West Virginia. It provides hundreds of jobs and helps the state economy.”

When I pulled into the parking lot at Winterplace, the temperature was hovering around 40 degrees — a few degrees colder than Charleston, but a lot windier.

I wasn’t sure if I was dressed appropriately, whether I’d be too warm or too cold. I was wearing a pair of banana yellow ski pants I’d borrowed from a friend at CrossFit WV. I had an old winter coat, a leftover from my larger days I’d meant to pass on to somebody else but had pushed into the back of a closet.

I rattled around inside the thing like a peanut in a paper bag.

Under the coat, I wore a sweatshirt and a thermal base layer meant for running in cold weather. I had gloves, thick socks and a grotesque winter cap decorated with skulls and weird-looking braids — also on loan.

I’d sweated the entire drive from Charleston to Raleigh County.

Inside the ski resort, I met Tom Wagner, the executive vice president of Winterplace, who directed me toward the rental shop, where the staff walked me through assembling my gear.

Everyone was exceedingly nice to me, even before I started taking names. They gave me little pieces of advice and encouragement as I went along.

Charles White, helping me strap on the bulky ski boots, told me, “You want your toes to just slightly touch the inside of the boot.”

When I leaned forward into the boots, I should feel my toes pull back.

He strapped the bulky, heavy things onto my feet. They swallowed up most of my lower legs.

“You’ll also want to keep the straps loose while you’re walking around,” he told me. “It makes it easier. And when you go down steps, take it sideways.”

“First time skiing?” Joshua Johns, standing next to him, asked me. “Are you taking a class?”

He nodded and said, “You can usually spot the people who haven’t taken a class.”

“They’re on their backs,” he told me.

White, standing next to him, nodded.

With my feet encased in thick plastic, I stomped awkwardly across the room to Austin Hazelwood, who found me a set of skis and then told me I could find poles in the next room.

The rental skis were numbered, which would help me figure out which skis were mine if I took them off and left them somewhere.

“Like if you go outside and want to come back in,” he said.

I couldn’t fathom why you’d leave your gear outside.

Hazelwood asked if I wanted a helmet.

He studied me for a second and then said slowly, “For some people, yes.”

I think he was trying to be polite and probably meant, “For you, yes. Two would be a good idea, maybe.”

I got a helmet and then fished a set of poles out of what looked like a bin for kindling.

Getting around the resort

With time to kill before the lesson began, I walked around and haltingly climbed a set of steps to the Mountain Mama Food Court.

I could get coffee, I thought.

I could also get chicken nuggets, cheese fries and maybe a beer, but the dining hall was crowded. Between the poles, the helmet and the skis in my arms, I wasn’t sure how I was supposed to carry a cup of coffee, let alone a plate of chicken nuggets.

Seated at a small table, my gear spilling every which way, people stared at me.

I think I was the only person in the room who’d brought their skis and I stood out.

After a couple minutes of feeling awkward and hungry, I decided I should just go outside. Maybe someone would show me how to actually put the skis on.