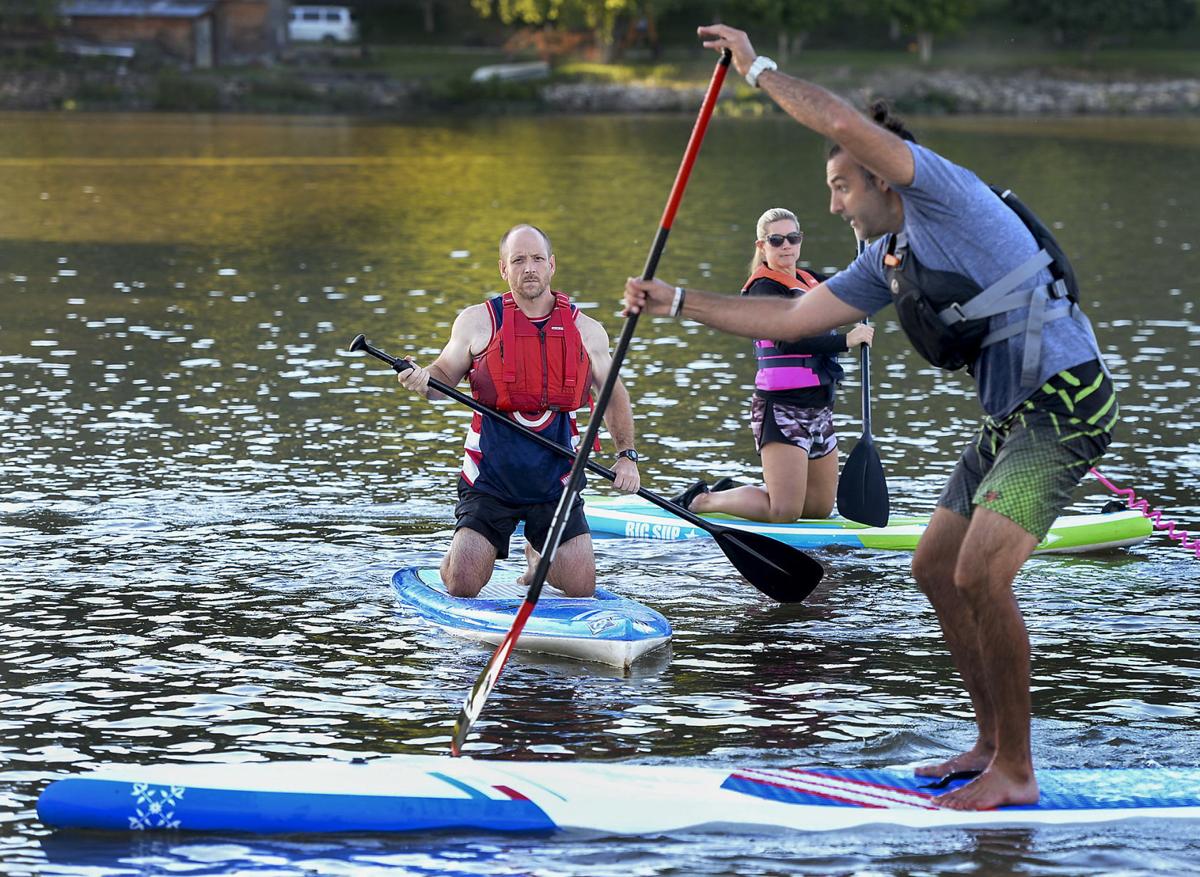 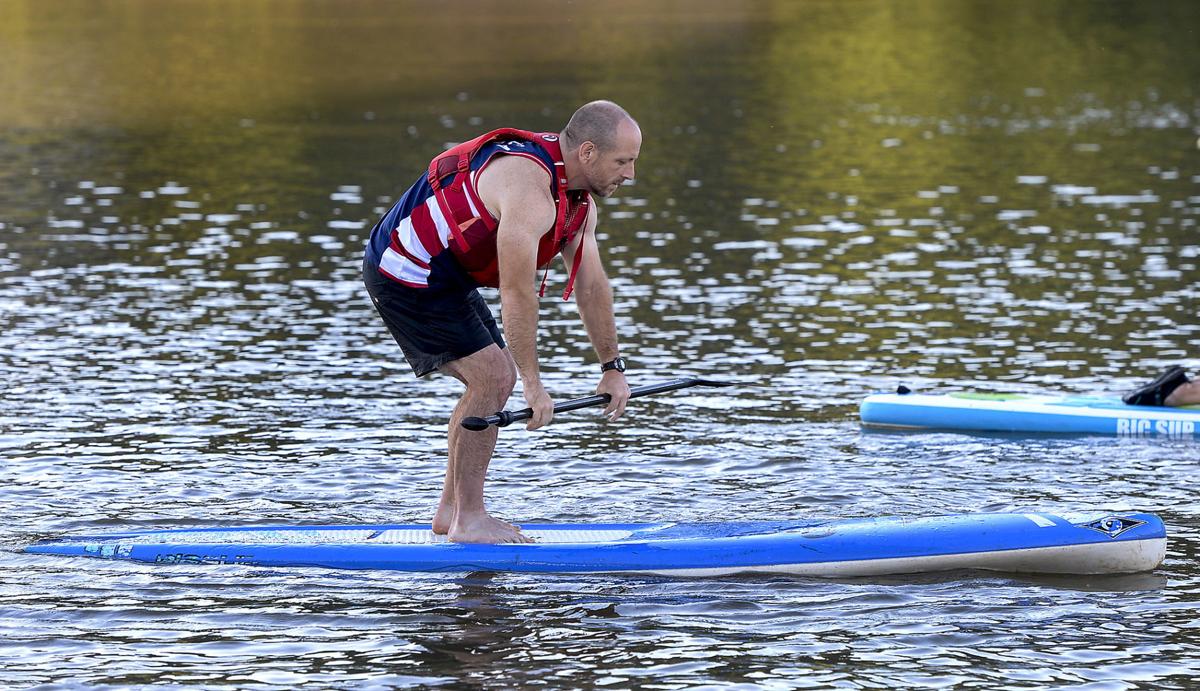 Bill Lynch trying to stand up on his board during stand-up paddleboarding class in Winfield.

Bill Lynch trying to stand up on his board during stand-up paddleboarding class in Winfield.

Evan told me I was doing really well, but it was hard for me to tell if he was serious at first.

Gregarious and kind, Evan Young, the owner of Appalachian Boarding Company, was saying something similar to almost everyone.

A few yards from the banks of the Kanawha River in Winfield, Evan paddled up next to newbies and more advanced paddlers alike, coaching, cheerleading and encouraging everyone who’d joined him for Appalachian Boarding Company’s “WhaSUPwednesday” paddleboard class.

“I like how you’re standing,” he told me as we got started. “You’ve got a Greco-Roman thing going on there, but you might try lining your feet up a little more parallel.”

Translation: You’re standing on the board like you want to wrestle the river. You cannot win. The river is much bigger than you.

Also, he thought I might like to try standing closer to the center of the board, over the handhold you used to carry the board on dry land.

From the first time I’d stood on the board and taken my first couple of strokes with the long-handled paddle, I’d teetered from side to side, fought to stay upright and come perilously close to flipping saucer over teacup into the drink.

Clearly, I was doing this the hard way, so nodding, I crouched down on the board for a little more stability, repositioned, and stood again. Much better.

After nearly a month spent loitering near local rivers and getting my feet wet with paddle sports, I’d returned to Winfield to try paddleboarding.

Watching other people, I can’t say that I thought a paddleboard would be much of a challenge. I’d come through canoeing and kayaking on local waterways without too much trouble.

I hadn’t drowned, hadn’t fallen in and about the worst that had happened was that I’d forgotten to wear sunscreen or a hat one afternoon on the Kanawha River.

Guys with my hairline should know better. We burn.

I expected I’d get out on the board, paddle for a few minutes, and at some point, lose my balance and tumble into the river with a loud splash.

Gazette-Mail photographer Chris Dorst would catch the picture of me getting dunked and we’d probably use the photo.

People getting dunked is funny. It’s a staple of every reputable carnival in America. With county fairs and town festivals on an indefinite hiatus, the public wasn’t getting their annual fix of sort of familiar people (the high school football coach, the mayor, the local weatherman, for example) getting dropped into a tank of water by a 12-year-old with a wicked fastball.

Me taking a dive would be doing everyone a public service.

But I wasn’t looking forward to actually getting into the water.

All this month I’d been plagued with nagging feelings of mortal peril. Call it the anxiety of a year that’s been one awful worry after another or some unresolved childhood trauma, but I felt agitated and uptight, while Evan seemed utterly chilled out.

That had been part of the reason I’d come back. Evan seemed to be channeling the zen peace of a West Coast surfer, which was quite a feat given that West Virginia is landlocked.

Just before the group of about 20 participants hit the water from the boat launch at the Winfield Community Center, the lot of us stood around as Evan collected signed waivers, talked a little about going out onto the water and handed out life jackets.

Many in the group were repeat customers and had come out to paddleboard or kayak half a dozen times since the beginning of summer, but there were a few newbies.

Evan sized up the crowd and parceled out the equipment based on the paddler’s size, weight and experience. It wasn’t quite one size fits all. Shorter, wider boards were more for beginners or could maybe be used in choppier water, while the long, thin boards were for flat water racing.

Evan remembered what some people had used before. Occasionally, he asked someone if they wanted to try something different.

A couple of the teenage boys he put on racing boards, which moved much faster, but were trickier to keep your footing.

I got a baby bear board — a paddleboard that was neither too long or too wide. Evan called it an intermediate board.

I nodded and said, “I run a little and do CrossFit.”

“That’s great,” he said, and gave me a paddle with an adjustable handle that was just slightly taller than I was.

It had a single blade and looked more like a canoe paddle or an oar than the double-bladed kayak paddle.

Evan showed us how to grip the paddle, hands about 18 inches apart and thumbs up on the handle. Depending on whether we stood, kneeled or sat on the board, we would adjust the position of our hands, choking downward closer to the blade.

With that quick lesson, we carried our boards and paddles and ambled to the boat launch.

Several kids and their mothers were already pushing away from shore, but I hung back, gingerly set the boat down just off the ramp, stiffly climbed onboard and shoved off.

Any second now, Chris was going to get his picture.

“Don’t stand up right away,” Evan told us. “Take a little while and settle in.”

I nodded, but after a minute or two, I went ahead and stood, unsteady at first, but I adjusted and got used to it. I could feel my core muscles becoming engaged to keep me upright. What do you know? The CrossFit stuff was paying off.

Leisurely, we traveled upriver. I listened to instruction and got used to switching my stroke from side to side to maintain a sort of straight course. I practiced turning, took a few lefts and rights too fast and nearly flipped myself into the water, but I kept my footing.

When jet skiers or motorboats happened past and churned the waters, Evan told us to point the noses of our boards at the incoming waves and paddle through them. It was the best way to maintain control.

I began to relax. It was coming up on dusk and there was no hurry to be anywhere. Evan showed us a shallow cove where we could cruise in to look for wildlife.

I took a spin around the cove but didn’t see anything beyond a few water bugs and what might have been the gurgling signs of a turtle.

On the way back to the boat launch, I struck up an easy conversation with a paddler named Sean, who told me he sometimes brought his dog out with him. She hadn’t been a fan at first, but now she’ll sit on top of a life jacket at the tip of the board.

As sun began to sink, I decided to call it a night. I thanked Evan and then handed off my board to a latecomer.

I never did fall off the board. The only time I even got a little wet was while bringing the board into shore, which wouldn’t have made a good picture. Besides, my photographer had already gone home. He had better things to do than watch me not fall in the river.

Turning in my life jacket, I noticed how much better I felt. Throughout the last hour or so, I hadn’t really thought about anything else besides trying to stay upright and keep moving. The flood of concerns and aggravations running through my head had been dammed down to a feeble trickle. I’d only been worried about maybe falling in the water, which was no problem at all.

I know how to swim.

The drive home was the best I’d felt in days.