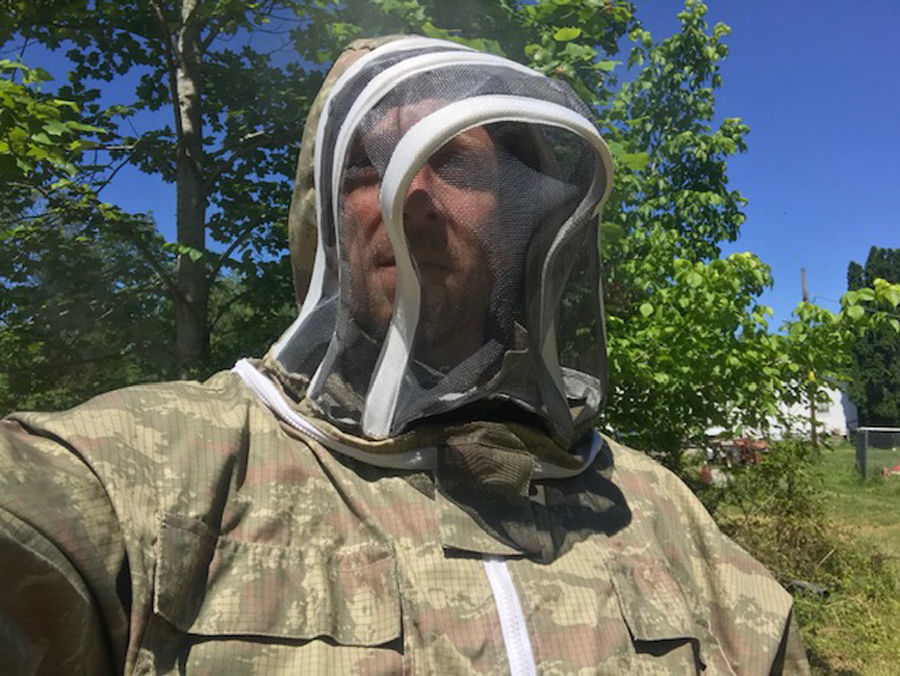 Ever a fan of fashion, reporter Bill Lynch models the summer look for beginning bee keepers. 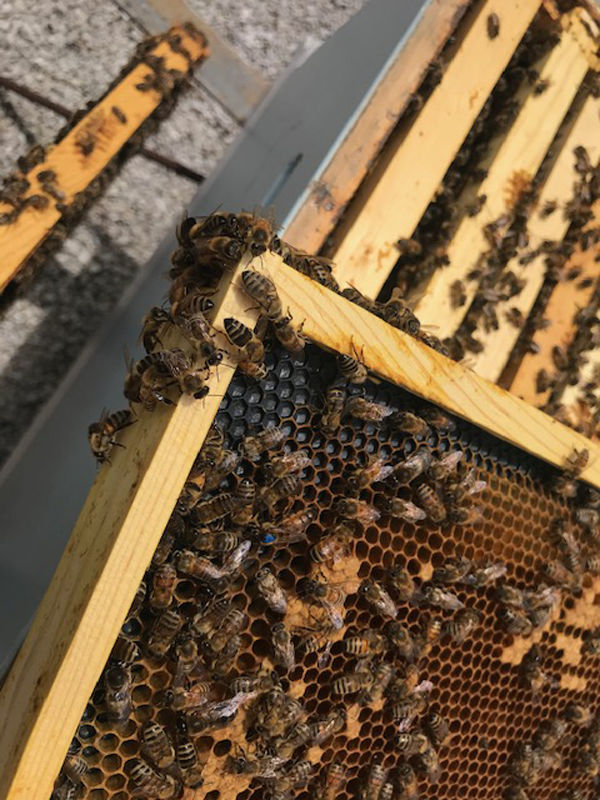 Beekeepers mark their queen bees. Larry Morris marked his queen with a blue dot, which makes it easier to spot among the thousands of other bees. Beekeepers also use different colors to track the age of the bee.

Ever a fan of fashion, reporter Bill Lynch models the summer look for beginning bee keepers.

Beekeepers mark their queen bees. Larry Morris marked his queen with a blue dot, which makes it easier to spot among the thousands of other bees. Beekeepers also use different colors to track the age of the bee.

Steve was waiting in his bee yard when I turned up at 11 in the morning for my next beekeeping tutorial.

“I’ve been up since dawn,” he said. “I’ve had a busy morning, getting things done.”

Steve stopped, looked at me and said, “What were you doing?”

Shrugging, I told him I got up, took care of my dogs, went to CrossFit ... and he started laughing like I’d just told him I’d gone to a tea party with my teddy bear.

And he had been. His old pickup truck was parked out next to his line of wooden box hives stacked on 4-by-4-inch lumber and cinderblocks.

Today, he wanted to check on a few of his colonies and expand the number of hives he had. This meant matching a few queen bees with some regular bees and putting them together inside new boxes.

If all went well, the new hives would thrive and continue about the business of making honey.

“But you’re going to need to cover up,” Steve said, as he handed me a kind of sweatshirt with a mesh covering for my head, along with a pair of gloves.

It was that kind of day, but I told him I was ready, pulled out a $5 box of Benadryl from Walgreen’s and dropped it on the tailgate of his truck. I had a tube of lidocaine in the car.

After he zipped me up in my summer bee hoodie like an oversized toddler going out to play in the snow, Steve set me to work scraping the ground flat with a mattock and then moving cinderblocks and lumber to make shelves for the new hives.

After we had a shelf, we shuffled individual frames of bees from their established hive to their new hive.

Steve’s hives contained eight wooden frames stacked end on end like records in a box or index cards. Some were covered in busy little bees doing busy little bee things. Others were capped with honey or full of scab-like birthing chambers for drones or worker bees.

“You have to be careful about taking out the frames and moving them around,” he said. “You have to put them back in the order they were in. If you don’t, it’s like redecorating somebody else’s living room.”

That didn’t make much sense to me since we were essentially evicting entire frames of bees and contemplating regicide.

One of Steve’s queens was at the end of her reign. She wasn’t producing as many eggs as she needed to maintain the colony through the winter.

He pointed her out to me, a larger bee with a longer lower half. The queen seemed to know something was up, that plans were afoot. She scurried away, trying to hide, while the hundreds of other bees generally ignored us.

After a moment or two, Steve said, “She gets to live another day.”

Then he put the frame back in the hive.

From one box, Steve pulled out a single frame encased in amber.

The other frames in that particular box appeared to be the same.

Steve had me pick up the box and set it to the side while he peered in and looked for a good frame to transplant.

Hugging the box and trying to gently get it to the ground while not getting stung, I nodded. It was definitely something like that. I lifted with my legs, not my back. Maybe starting the day with CrossFit wasn’t so silly.

The bees left me alone, even though I mashed a few here and there as I moved boxes and frames. They floated around me, but barely landed on my clothes and never went for my eyes.

“On a day like today, they’re happy to be busy and are going out to collect nectar,” Steve said.

On a cloudy, gloomy and wet day, the bees would hole up in their hives, brood and be ready to pick a fight.

“You just learn to leave them alone on days like that,” Steve laughed.

Through Steve, I met Larry Morris in Pinch, practically one of my neighbors. He had a small farm off Quick Road and managed a bee yard in Elkview, not far from Herbert Hoover High School.

When I showed up, he was showing a high school student named A.J. some beekeeping equipment and talking to him about getting into beekeeping. A.J. had seen a demonstration about beekeeping as a boy scout a few years back, and now wanted to give it a try.

Larry showed us around. On his farm, he showed us where he processed honey. He pointed to a stainless-steel basin, where he drained the honey from the beeswax-sealed frames.

“You just scrape them down with a knife,” he said.

The frames were then loaded into an extractor, a kind of centrifuge that spun the frames around to get the remaining sweet stuff.

After that, Larry drained the frames and melted off the remaining wax using a kind of solar oven he built. He then cleaned and recycled the frames for use in later hives.

A lot of time, effort and some money had gone into building up his bee operation, but Larry said he didn’t produce that much honey.

This year, he’d hoped for a lot more, but West Virginia again had a long, cool and damp spring.

“And the bees hate that,” he said.

At Larry’s bee yard, we wore gear again and took the tops off of hives, but we didn’t have gloves. I was a little nervous about getting so close to the hives with my hands bare, but I’d been promised time and time again that I’d be stung.

I still had the Benadryl.

Larry looked for queens or for signs of a queen, like eggs in the tiny chambers or queen chambers, where queen bees would eventually hatch and emerge.

Queen bees leave the hive to mate or to swarm, but sometimes they don’t make it back.

“A bird will get one and then you have to replace the queen,” Larry explained.

If a queen is gone, worker bees can start laying eggs, but they won’t produce any female offspring, no workers and no queens.

Instead, what they get is an army of male drones, who don’t gather nectar, don’t defend the hive and spend most of their time laying on the couch, snacking and binge watching “Alone” on Netflix.

Under those conditions, a colony will die out, Larry promised.

Queens lay around 1,400 eggs per day. Many of those eggs hatch, but not all.

Larry said most hives lose around 700 bees per day during the warmer months and only have a lifespan of around a month and a half.

This time of the year, Larry said it was particularly important to have a good queen installed. Soon, she would be laying eggs for winter.

Winter bees were different than warm weather bees. They were bigger and lived for three or four months instead of maybe six weeks, but they rarely ventured out of the hive and spent most of their lives in darkness.

It seemed like a crummy kind of life. Their primary purpose was to serve as insulation for the queen, to keep her warm until spring.

When a queen died, disappeared, or met with an unfortunate accident, the colony would raise up a new queen, but that took time. Often it was better for the colony if a new queen was installed, which sometimes meant political intrigue and murder.

We finished up the afternoon without a bee sting among us and no regime change. The revolution could wait another day.