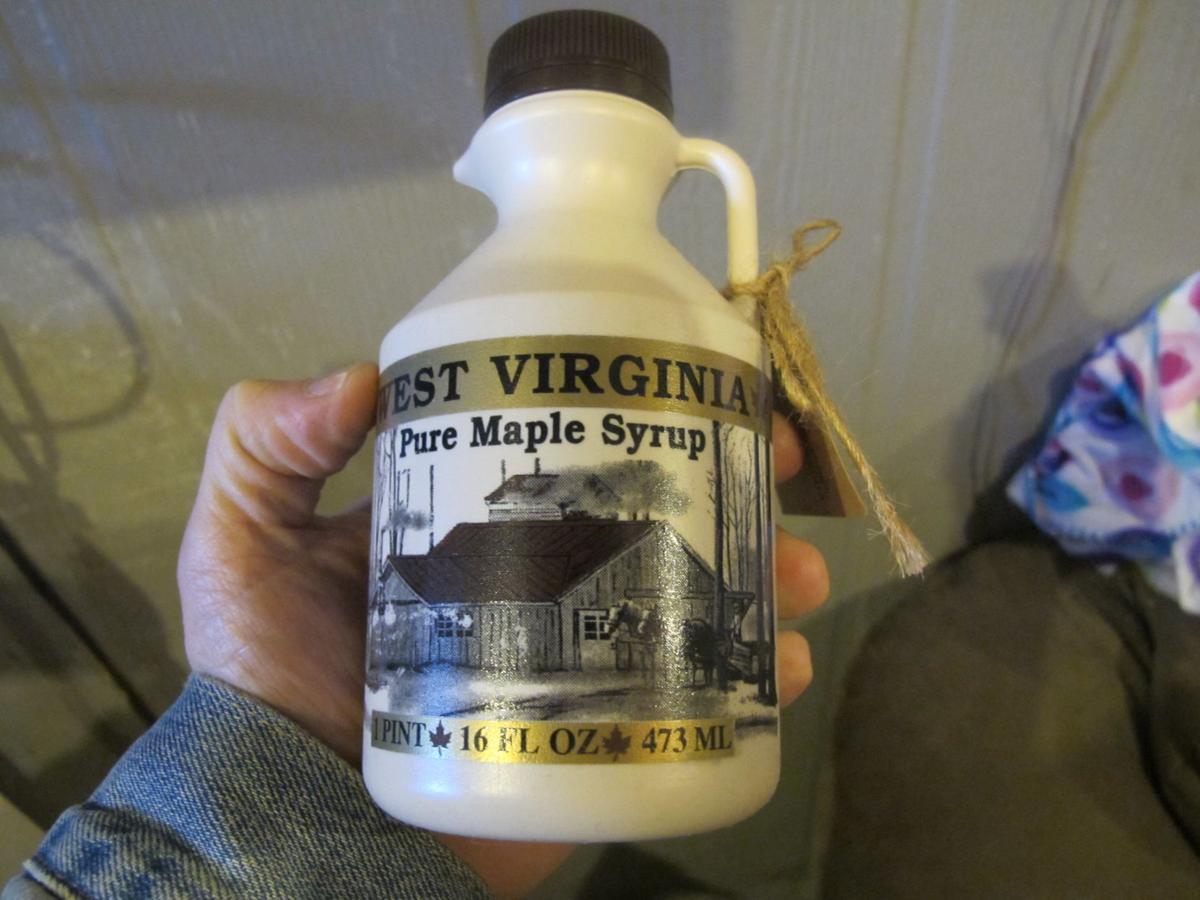 Through March (or as long as the season lasts), reporter Bill Lynch will be learning about maple syrup in the state. It’s a growing agricultural industry, apparently, though Bill is more interested in pancakes. 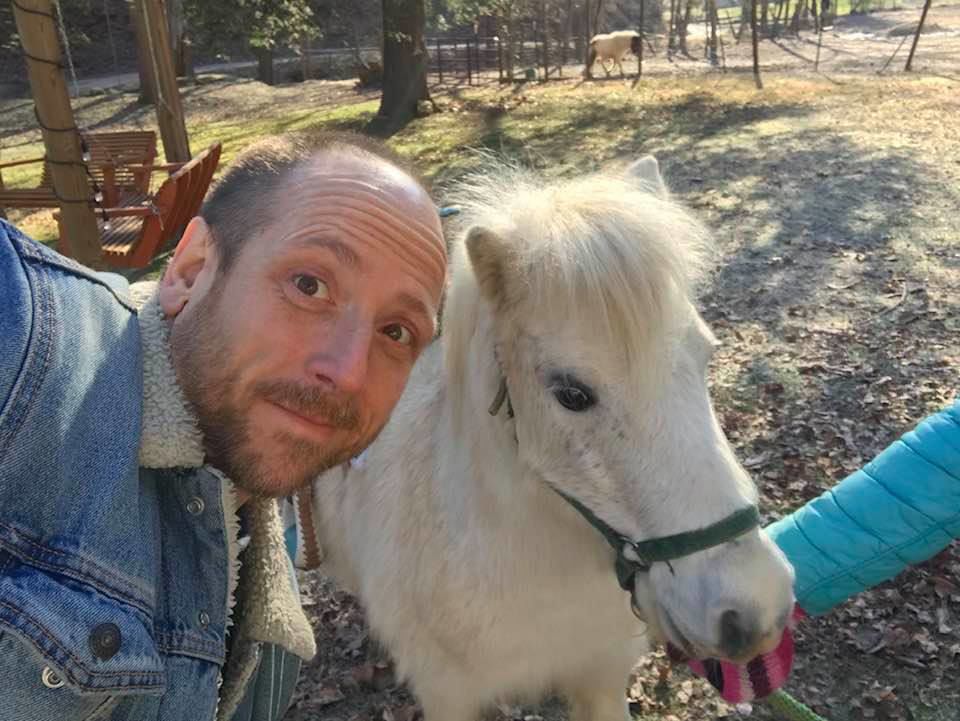 Snowflake (right) was featured as part of the entertainment during the Maple Day at Ronk Family Farm in Lincoln County. Reporter Bill Lynch bonded with the pony, but Snowflake seemed less sure. 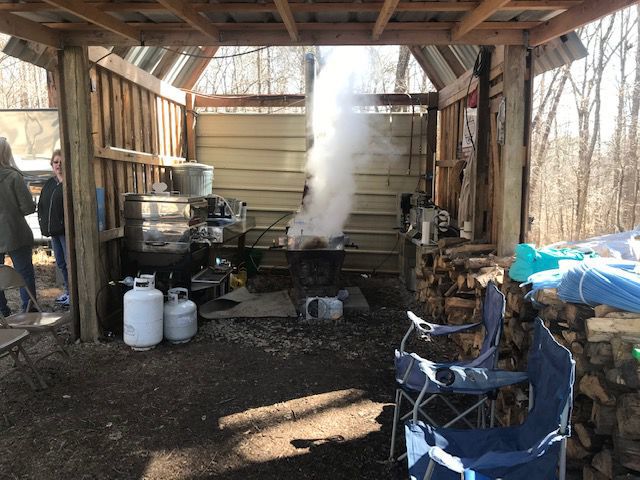 Ronk Family Farms has a small maple syrup operation in Lincoln County that produces between 30 and 50 gallons of pure maple syrup each year, though Paul Ronk would like to do more.

Through March (or as long as the season lasts), reporter Bill Lynch will be learning about maple syrup in the state. It’s a growing agricultural industry, apparently, though Bill is more interested in pancakes.

Snowflake (right) was featured as part of the entertainment during the Maple Day at Ronk Family Farm in Lincoln County. Reporter Bill Lynch bonded with the pony, but Snowflake seemed less sure.

Ronk Family Farms has a small maple syrup operation in Lincoln County that produces between 30 and 50 gallons of pure maple syrup each year, though Paul Ronk would like to do more.

The pony lying in the mud leaned its head up and looked at me as I slowed my car by the fenced yard. Beside it, a woolly sheep slept peacefully, while another pony on the other side of the sheep did the same.

Neither stirred, and this seemed at least a little weird to me, but what do I know? I keep dogs as pets, not horses.

The pony and I looked at each other for a second, but then I just drove on. It wasn’t as if I could ask it for directions.

I’d already driven past this little menagerie on Whispering Pines Road, in Alum Creek, twice in search of the Ronk Family Farm in Lincoln County.

Not just a mission, a passion

It was a little out-of-the-way neighborhood of spacious houses built alongside a creek, with a fishing pond at the far end of the street. This was where I was supposed to begin my month learning about maple syrup, but I couldn’t locate the farm, and nobody answered the door at the house where I knocked.

I’d been pretty excited about the syrup. I’m a lifelong pancake fan — really. Once, I asked the manager at the Kanawha City location of the International House of Pancakes (IHOP) how I might get to wear one of the “racing pancake” suits at Appalachian Power Park.

During games, people dressed up as pancakes race around the bases as a promotion. I overheard the IHOP manager talking about the team and the suits, which he said they provided to the ballpark.

On the spot, I volunteered to be one of the pancakes, but he looked me over and said, “Those costumes are pretty small. I don’t think you’d fit.”

Nodding sadly at the unfairness of it all, I then paid for my typical meal, which was likely the Colorado Omelette with a short stack of buttermilk pancakes drenched in butter and syrup.

Of course, I couldn’t fit inside that costume. I could barely fit in my jeans at the time.

Going to the Ronk Farm felt a little like circling back. A few years ago, when I’d spent 12 months as a vegan for the newspaper, I’d visited Frostmore Farm, in Pocahontas County, to write about their maple syrup operation.

It seemed like a new, unusual and interesting industry for West Virginia to get into. How could we compete with Vermont or Canada and their vast reserves of maple goodness?

But on the tour, the owners of the farm made it seem plausible.

I’d come away with a story and a small bottle of homemade syrup that I used on a batch of vegan pancakes that looked, tasted and had the texture of a dollar store potholder.

Even real maple syrup can only do so much.

I’d learned a little, but not enough. I thought about going back, but after getting lost on my way to Canaan Valley to ski, I wasn’t crazy about taking another three- or four-hour road trip.

The Ronk Family Farm was much closer — around 20 minutes from Charleston — and owner Paul Ronk seemed glad to get some help.

But I just couldn’t seem to find the farm or anything that looked like the pictures on their Facebook page. I drove up and down Whispering Pines Road for about an hour. At one point, I parked at the bottom of a hill too steep for my economy car to climb and hiked up to a house at the end of a gravel and dirt road.

Nobody was home and I had no phone service.

Frustrated, I drove back to the office, where I tossed my aging GPS into the back of my car, rescheduled with Ronk and worked out where his farm was located.

Hint: The two ponies and the sheep in the front yard should have been a dead giveaway.

Finally ...The next morning, I arrived at Ronk’s house just after 9 a.m. for the start of West Virginia Maple Days. He was directing relatives and friends who’d volunteered to help with the open house and demonstration of what they did to make syrup.

They expected a good crowd, probably several hundred visitors. The family was offering a pancake and sausage breakfast by donation for whoever was hungry, and free pony rides for smaller children.

That’s where I met Snowflake, the pony who’d been guarding the Ronks’ front yard.

“She’s shedding,” a woman brushing her told me. “That’s the problem with having long hair.”

I shook my head and said, “Yeah, I remember.”

The Ronks’ sugaring operation was across the road from the family home, at the top of a steep hill at the end of a frozen, gravel road.

The air smelled of sweet maple sugar long before I got to the shed housing the farm’s wood-fired evaporator.

Ronk was having some trouble getting the machinery to work. The night before, temperatures had dropped to an actual, wintry level. He said he thought ice might have built up in the rubber hose from the tank holding the collected maple tree sap to the shed, though he thought for sure he’d cleared the hose before.

No sap was moving, and the evaporator couldn’t boil away the water.

“Oh, well,” he said with a shrug and sent his son, Joe, with a blowtorch to warm up the line and hopefully get it flowing.

Numbers on sap and syrup

Ronk told me he’d tapped about 250 maple trees on his 60-plus acre property, but he had upward of 2,000 trees, which sounds like a lot, but maybe isn’t.

It takes 80 gallons of sap to make one gallon of syrup.

“That’s because we have mostly red maples here,” he said. “Up north, they have the sugar maples. You only need about half of that to make a gallon. The sugar maples just have twice the sugar.”

Ronk didn’t expect to get 50 gallons of syrup.

“It’s been too warm this year,” he said. “You need more days like we had yesterday. There just haven’t been. We’ll be lucky if we get half.”

Eventually, he said, he hoped to expand his operation and tap a lot more trees, but that takes time, which can sometimes be in short demand.

Maple sap is collected during the dregs of winter, when the sap inside the tree goes through a series of freezes and thaws as the temperature wobbles from day to day.

The way Ronk explained it to me was the trees sort of used the frozen sap as a way to insulate the inside of the tree from the outside cold. When it was warm, trees would pull up water from the soil through the roots, converting it to sap. When the sap froze, it would create a kind of armor a couple of inches beneath the bark.

To make syrup, maple producers tap into the thawing sap, which doesn’t harm the tree.

“Sometimes, it will come out in a gush, like it’s coming from a garden hose,” he said.

The season for getting the sap is short. In West Virginia, at best, we only get a couple of months — typically from the early to middle part of February into about the middle of March, but that varies from place to place and producer to producer.

“Higher elevations might have a different, longer season,” Ronk said.

The clock started ticking almost as soon as the temperatures started to rise.

“With the red maples, as soon as the branches begin to bud, it’s over,” he said. “It turns the sap bitter.”

Up north, like in Maine or Vermont, he said they could sometimes start as early as Jan. 1 and then be able to get sap until maybe as late as April.

As the crowds began to show up, Paul and his son got the sap running into the evaporator. As it heated up, steam billowed up in the cold air and rose through holes placed in the roof of the shelter.