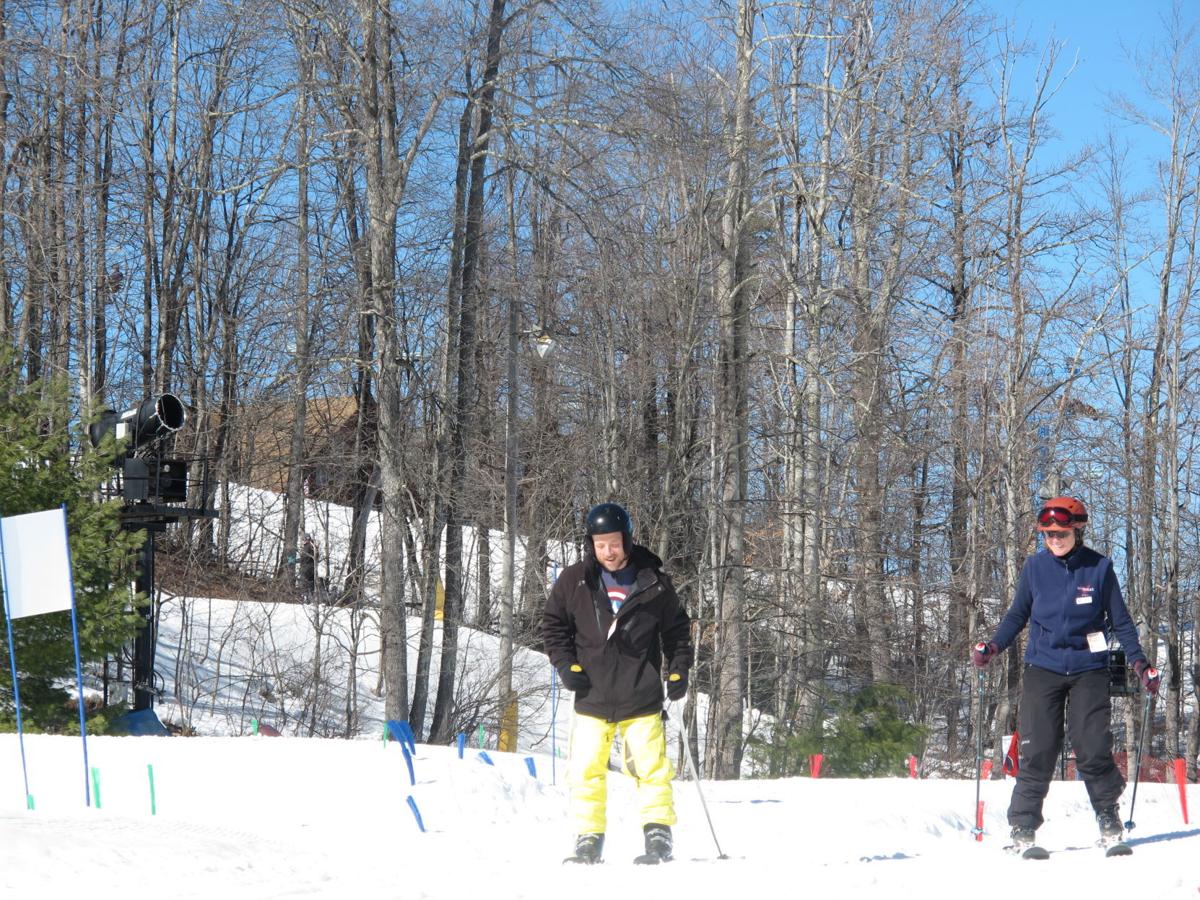 While maybe not the most dashing figure on the slopes, reporter Bill Lynch was very attentive while learning to ski at Winterplace. This was lesson one. 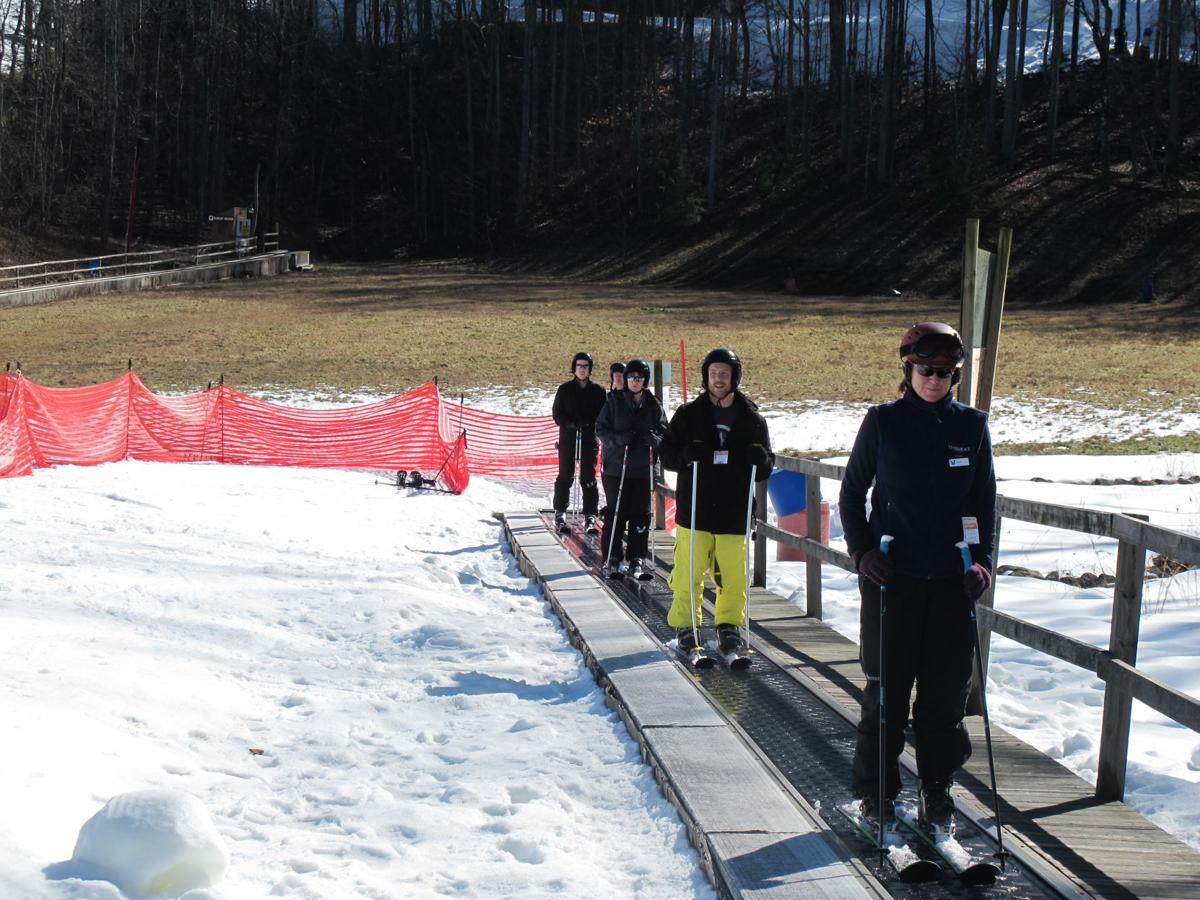 Reporter Bill Lynch (yellow pants) wasn’t always great at going down the slope, but he was really good at going up them.

While maybe not the most dashing figure on the slopes, reporter Bill Lynch was very attentive while learning to ski at Winterplace. This was lesson one.

Reporter Bill Lynch (yellow pants) wasn’t always great at going down the slope, but he was really good at going up them.

Up the hill from the ski shop and the snack bar at Winterplace, I trudged through the packed snow to the meeting place for the ski school with a pair of rented skis wedged under one arm, a set of ski poles in one hand and a helmet in the other.

Moving through the snow in ski boots was less awkward than walking around the lodge, but it was hard to ignore my feet. The boots, which encased my calves in hard plastic, made me very aware of my feet.

I wondered if doctors would be able to reattach my lower legs if they should happen to snap off after I inevitably fell.

Coming to Winterplace to take a ski lesson felt exciting but was also a little nerve-wracking. I worried about getting hurt.

In the months ahead, I have hopes to spend more time outside hiking, running races and putting in a new and improved backyard garden, but none of that would be easy on a pair of crutches.

Sucking down a Monster energy drink 10 minutes before I got to the Winterplace parking lot probably didn’t help my anxiety, but I was there in my bright, yellow pants.

I figured the odds of making it through the lesson were in my favor. Nobody was going to stick me on one of the black double diamond trails, the advanced slopes intended for experienced skiers or beginners with a death wish.

Many paths to get to the same place

From my editor, Maria, I learned ski slopes at resorts are color- and shape-coded to help you figure out what you’re in for.

A green circle slope is for training or beginner skiers. They’re not too steep, which means you aren’t likely to go very fast.

To make a green circle slope interesting to an advanced skier, they’d probably need to do it blindfolded while being chased by wild dogs.

Blue or square slopes are for more experienced and confident skiers. A skiing pro would probably still be bored, but maybe they could ski and work on their taxes or something.

Then I read up about the very rare orange rectangle slopes. These are for people who have superior skills, fantastic health insurance and the kind of confidence that comes with being 100 percent right with the Lord.

I checked around. No ski resort in the state has an orange-coded slope, but that’s not surprising. Those are mostly in Europe, like in the Alps, where they’ve been skiing since before the Vikings.

Not that any of it mattered. I’d be strictly hanging out in the safe, green zones, thank you very much, though “easy” was relative.

At the ski school meeting place, I stood out a little. Most of the group was made up of teens and tweens in shiny, new ski wear, but before I got too involved with the class, Tom Wagner, the executive vice president at Winterplace, pulled me aside.

Tom had invited me to take the lesson and had outfitted me with gear, but he decided I might do better in a one-on-one tutorial than in a full-sized class.

I was introduced to Sandy, a retired computer programmer and caving enthusiast who’d been an instructor at Winterplace for several years.

Sandy and I walked up to the “Easy Street” learner’s area at Winterplace, where she showed me how to lock my boots onto the skis and explained the basics of just getting around.

“What you’ve got to begin with are the French fries and the pizza wedge,” she said.

This described how I was supposed to keep my skis to move around. French fries meant keeping my two skis parallel and forward. On a downhill slope, that would provide the least resistance and give me speed.

With the pizza wedge, I was supposed to keep the tips of my skis pointed a bit inward. This would help slow my rate of travel and help me stop, if I wasn’t going too fast.

Turning was better and less likely to cause a crash if I ended up picking up speed.

I could use the poles to push forward on a flat surface or for stability when standing still. They aren’t so good as a means to stop, however.

Sandy asked if I learned better through being told, being shown or by doing. I told her I was more hands-on but didn’t mention that I’m not a fast learner and see myself as more of a C student.

Case in point: A year ago, I spent a month working with Sarah Plumley and Sarah’s Bakery on Bridge Road in Charleston and learning about making pies. The Gazette-Mail newsroom loved that project because I frequently brought in my homework.

I got better, but not great. In fact, I’m still learning. I bake a couple of pies a month, but my pie crust is still a work in progress. It’s not half as good as Sarah’s — and I’m using her recipe.

Falling down, Sandy said, was going to happen.

When I wound up on the ground, she told me to unsnap my boot from the ski lowest on the side of the hill. I could then get to my feet by coming up on one knee, using my poles for support.

After I was upright, I could reposition the two skis flat sideways to the slope, lean on the edge of the top ski and snap back into the lower ski.

From there, I could get back to the skiing.

We spent more than an hour in the learner’s section, gently skiing toward the bottom of the slight decline, occasionally avoiding small children being shown how to ski by their parents.

Some of them were really good and would probably be working on Olympic medals in junior high, while I struggled to stay upright.

My chief problem was confidence. Once I reached a certain speed, I began to worry about where I was going and became distracted, but I stayed on my skis.

“You exercise, right?” Sandy asked me.

I told her I did CrossFit and was an occasional distance runner and weightlifter.

Sandy nodded and said, “The exercise helps. You’ve got a good core.”

I laughed. The instructors at CrossFit WV would get a kick out of that, I thought, though I didn’t know if they’d agree with her.

After I’d come down the Easy Street slope several times, Sandy wanted me to follow her down the “No Problem” course, a connecting beginner’s slope that was a bit steeper, but led to a ski lift.

“I want you to get the full experience,” she said.

I followed her down. After a couple small wipeouts, we hopped on a ski lift, which took us farther up the mountain to the Panorama Glades.

“This is still pretty easy,” Sandy said. “You can do this.”

While it was still a beginner’s course, it was much faster than the learner’s course. Following Sandy as best I could, I managed to hold it together until about two-thirds of the way down. Then I couldn’t seem to stay upright for more than a few yards.

Other skiers and snowboarders zoomed by and I couldn’t concentrate or control my speed enough. Every other turn sent me sprawling into the snow.

By the end, Sandy helped me scoot down to the foot of the hill, where I was able to safely ski to the lift that would take us back toward the lodge.

Sandy suggested I could spend some more time on the slopes learning on my own and getting some experience, but I was done for the day.

I felt a little rattled. I needed lunch and just wanted to go home.

I thanked Sandy and Tom for the lesson, but I was glad to turn in my skis.

While it might sound like I had a rough go of it, I thought it went really well — much better than I’d imagined. There were no broken bones, no crippling injuries and I’d come away without so much as a bruise.

I wasn’t even sore in the morning — and I’d had fun.

I looked forward to giving it another shot.