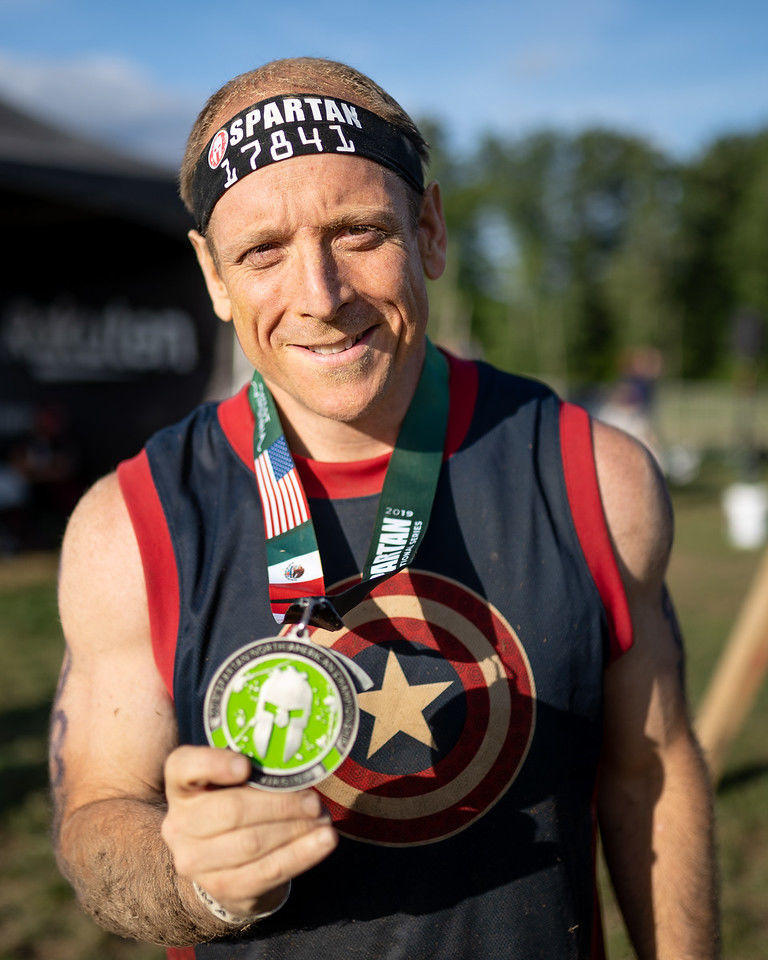 Part of reporter Bill Lynch’s year with One Month at a Time took him to the Spartan Race near Fayetteville. He got a medal, a grenola bar and eventually a bath. 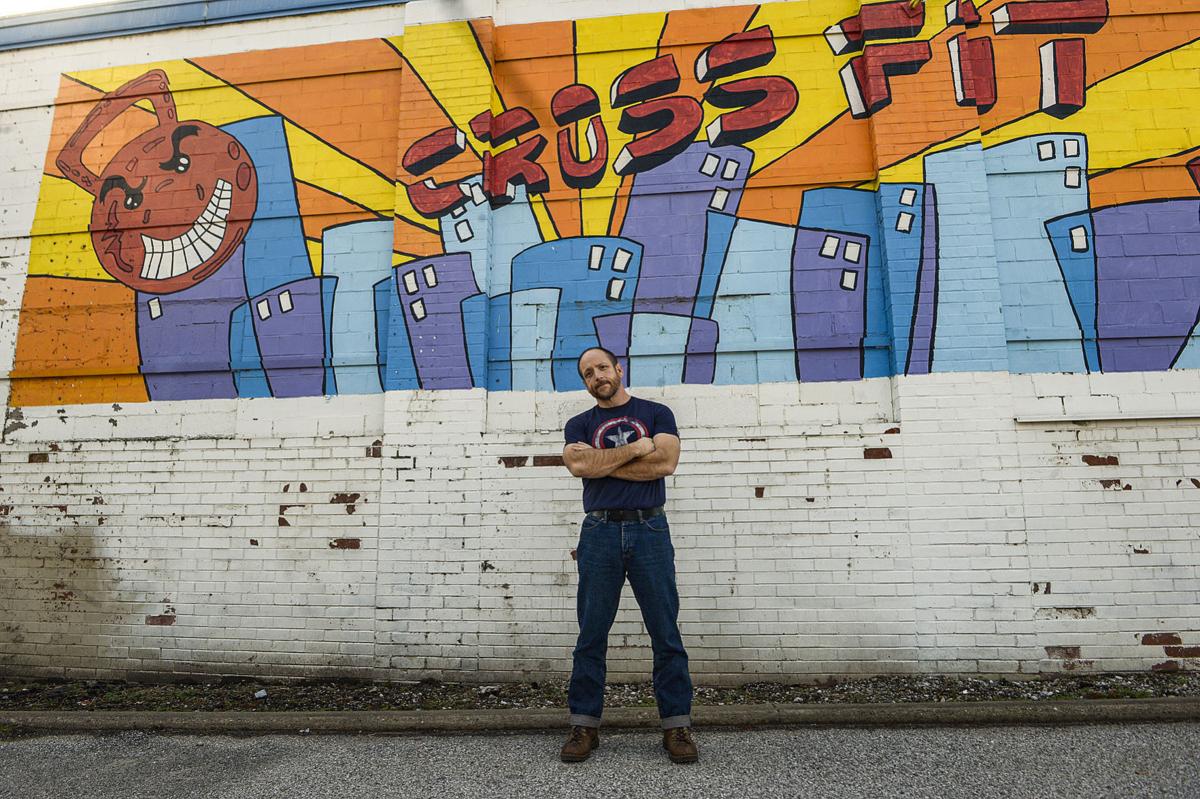 Where it all began (sort of). Reporter Bill Lynch started his year at CrossFit WV in Charleston, which helped him get in shape and gain a certain amount of self-confidence (sort of). 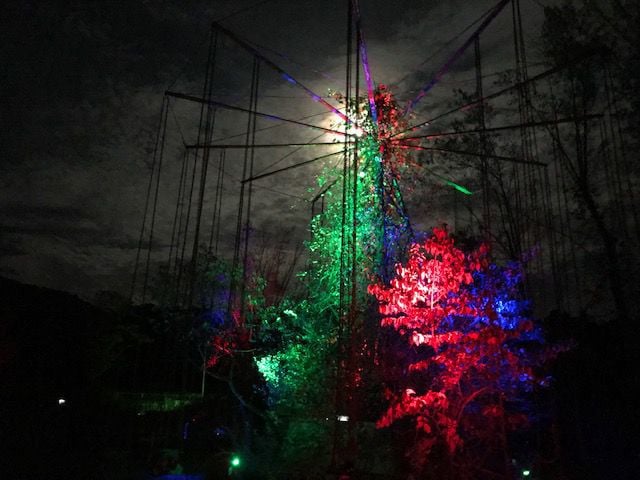 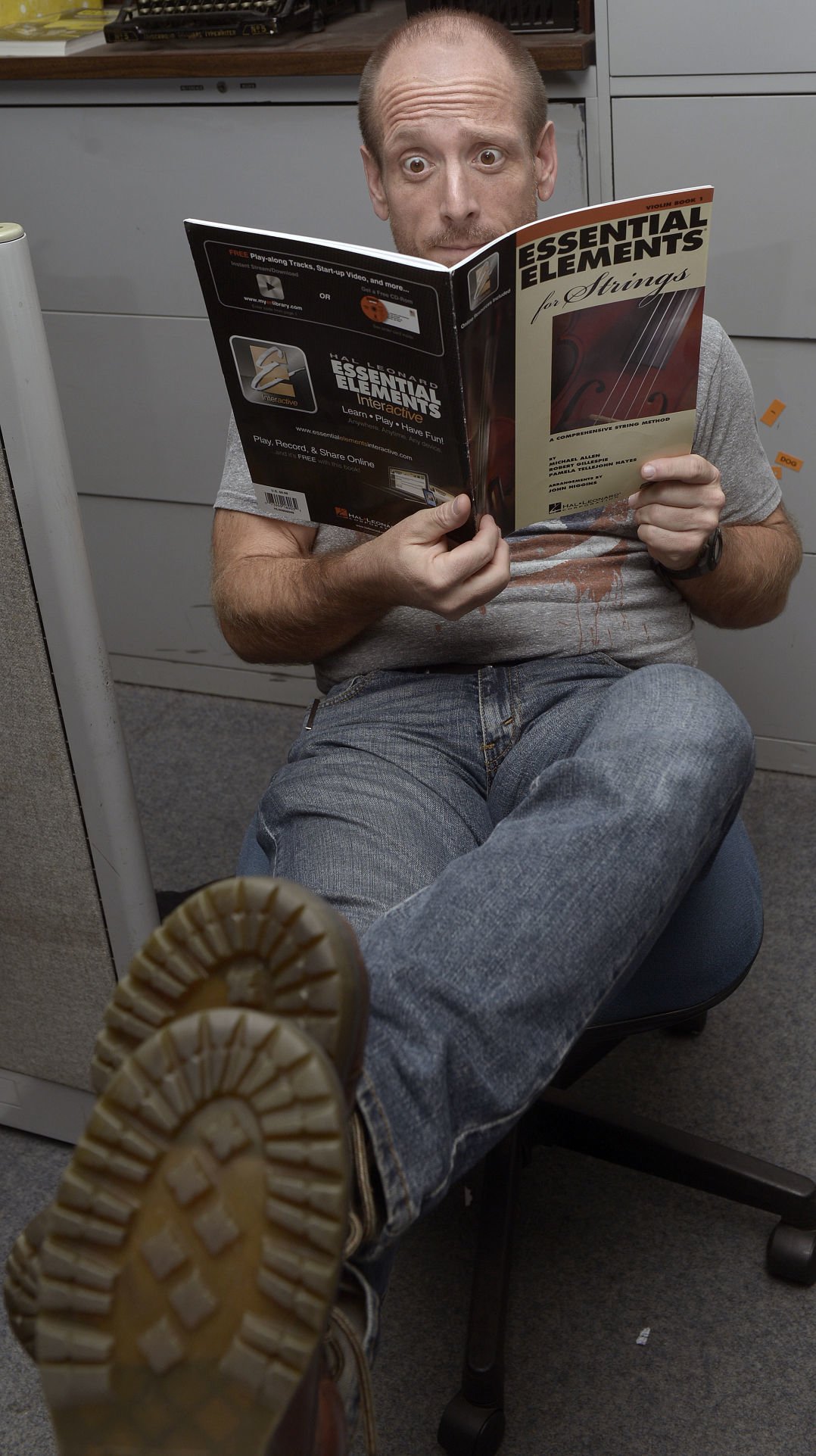 During the year, Bill gave learning to play the violin a go. It was pretty good. He was almost as good as fifth-grader. Almost. 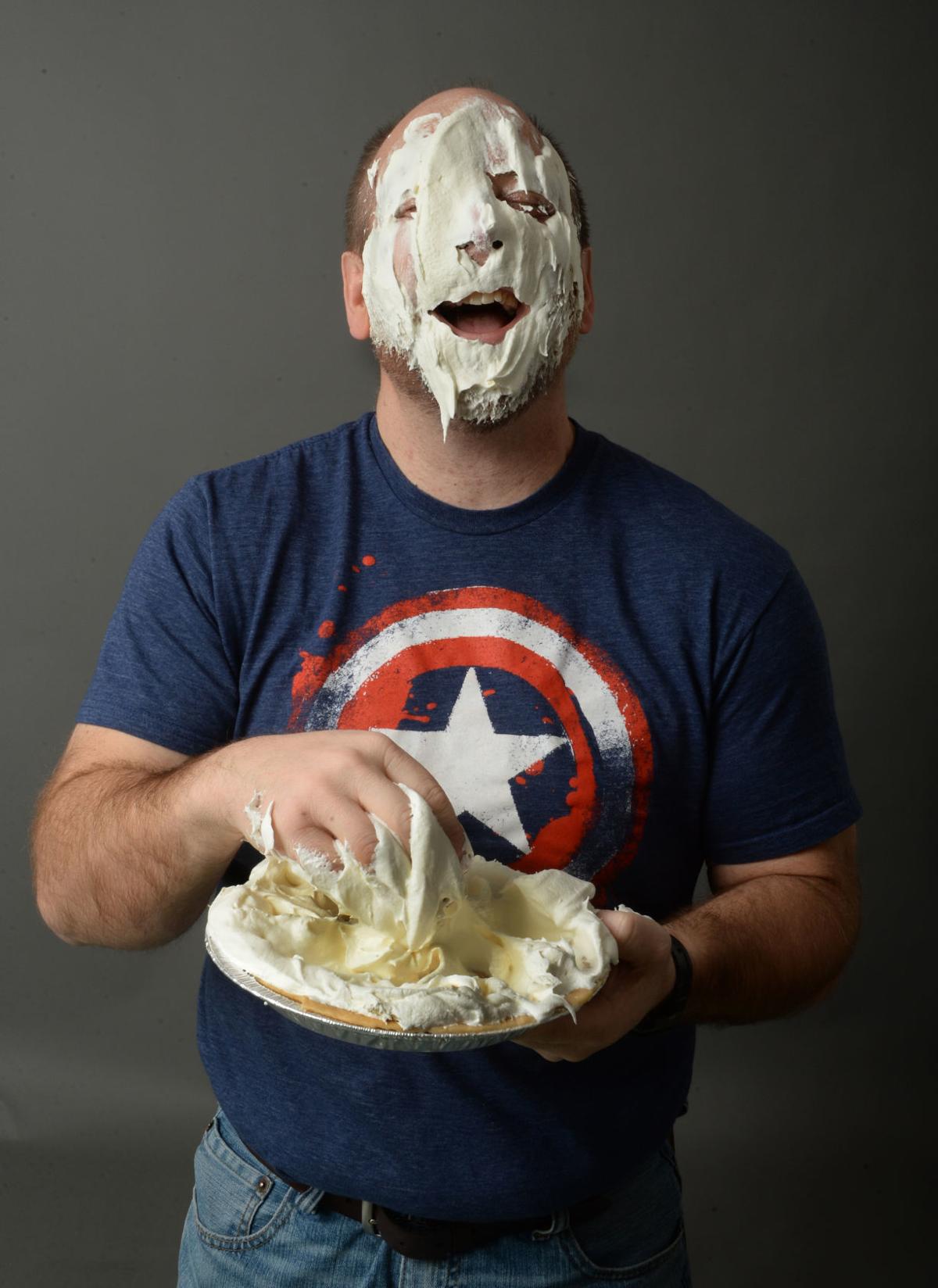 February’s pie month was popular with readers, with the newsroom, basically everyone.

Part of reporter Bill Lynch’s year with One Month at a Time took him to the Spartan Race near Fayetteville. He got a medal, a grenola bar and eventually a bath.

Where it all began (sort of). Reporter Bill Lynch started his year at CrossFit WV in Charleston, which helped him get in shape and gain a certain amount of self-confidence (sort of).

During the year, Bill gave learning to play the violin a go. It was pretty good. He was almost as good as fifth-grader. Almost.

February’s pie month was popular with readers, with the newsroom, basically everyone.

One Month at a Time’s 2019 season began with CrossFit WV instructor Caroline Price trying to help me figure out how fit I was.

It was just up the alley running parallel with the railroad track. There was an orange cone marking where I was supposed to turn around.

I got lost, missed the cone and Caroline had to come find me.

The decades of mostly just eating whatever I wanted, vague exercise goals and sketchy, self-care had almost caught up with me.

I had improved from where I’d been just a few months before, when my weight had been around 260. My doctor had informed me he was upping my blood pressure medication and that we needed to do some tests on my kidneys.

I spent a couple of days wondering if I maybe had cancer.

After the run, Caroline and I agreed that my fitness, on a scale of one to 10, was probably a three — low average.

Caroline was being charitable. I was delusional.

A year of lessons

And that’s how I began the year, with a vague mission to lose weight, get in shape and finish the Spartan Beast Race at the Summit Bechtel Reserve in Glen Jean, to make good on a prior commitment.

So much more happened.

It was another year of lessons, as well as some hits and misses.

Some monthlong projects worked — like learning to ride a motorcycle or make a decent pie, while others crashed and burned — like whiskey making and crocheting.

Still, whether I passed or failed, I always met new people and expanded my horizons. Some of the things I learned were personally very profound.

Through the strings program hosted by the West Virginia Symphony Orchestra I discovered that learning to play an instrument wasn’t impossible for me.

Since I was a kid, I’d always thought I was a total loss at actually playing music, but maybe that’s not true.

Maybe what had happened was I’d simply never picked up the right instrument. The music program in my hometown was largely designed to fill the ranks of the high school marching band, which served to support to the high school football program.

Instilling a love of making music had been secondary at best. Nobody expects the kid marching along in the back row to spend his adult years entertaining himself and his family wailing on a bass drum in his living room or blarping out the bass line to “Doo Wah Ditty.”

To me, that month underlined the greater value of things like strings programs, which seemed more focused on the needs of the student than just the school.

From the month I spent trying to “go green,” I got an idea of how much waste my very normal household produces and how little effort it takes to cut back on what I throw away.

You’re not an enemy of coal or business if you turn out a light when you leave a room. It’s just better for everyone in the long run and you also get to keep a little more of the money you earn.

What I learned about CBD is that some of it seemed to work — for me, I thought it reduced the anxiety I felt at the time, though I tend to respond well to suggestion.

Much of the reliable research, so far, says CBD doesn’t do much of anything, but plenty of people told me they got something from using the oil. Of course, a few people also told me that they didn’t.

A couple of times with these monthlong adventures, I got a peek into the lives of other people. The men who wanted to learn how to ride a motorcycle were a pretty diverse bunch. One guy in the class I took wanted to ride so he could spend more time with friends he’d made at work. Another was trying to make use of something his grandfather left him. Another man had just got married and needed to learn to handle a larger bike because his wife wanted ride with him, and she just wouldn’t fit on back of the tiny “crotch rocket” he had.

The men I met through Charleston’s public works department told me they enjoyed what they did, but thought they were underpaid. The workers I rode with were proud of their city, though sometimes baffled by the people who lived in it.

I got a kick out of driving the street sweeper but wished I could have made it to riding on the back of a garbage truck.

As with previous years, there were skills and habits I took with me past the one month installment.

My pie making improved enough that I’ve probably made over a dozen pies for friends, families and co-workers since that month ended.

I still haven’t mastered making the piping circling the pie crust pretty, but nobody has complained about how anything looked. I’ve gotten a fair number of compliments for my pies, and my sister Laura always asks me to bring a pie when I come to visit.

That’s high praise in my family when anyone asks you to bring anything.

My recipe for gingerbread houses used vegetable shortening, which makes a more manageable dough, as it does for pie crusts.

The cookie recipe called for butter, which just tasted so much better.

I’m still recycling plastic and cans — and who knows? I might give composting a try after I plant my garden in the spring.

I’m not using CBD, but I am still going to CrossFit WV on Brooks Street in Charleston three or four times per week.

If there’s any one thing people ask me about now, it’s the weight loss and CrossFit. I always say that most of the diet and nutrition experts say that “weight loss” is 80 percent diet and 20 percent exercise.

I watch their eyes glaze over when I talk about food diaries and counting calories. Nobody wants to do that. Everybody tells me they love to eat, and I’m with them. I don’t want to do that. I love to eat, but I figure it’s easier than managing diabetes, high blood pressure, hypertension and heart disease.

Still, CrossFit helped me a lot. I’ve exercised a good chunk of my adult life. I mostly swam laps at the pool or lifted weights, staying within my comfort zone. There’s really only so far you can go with that.

I needed to shake things up, and CrossFit WV did that for me. Whenever I stumbled through the door, I checked my head and let somebody else do the driving.

Because of the workouts at CrossFit, I became more confident about what I could do with my body. They showed me it was possible for me to breathlessly jog a quarter mile and then a half mile.

Eventually, I knew I could run a full mile and then two miles. I got stronger, trained on my own and even completed the Charleston Distance Run a week after making it through the Spartan Beast Race.

Of the things I’ve learned this year, I don’t know how much will take. I never do. But I’m hopeful that the exercise habit will stay with me, that I can maintain my healthy weight. And maybe I will. I almost have to. I threw out all my old clothes.

This One Month year began with me gasping for breath as I ran a lap around Valley Gardens and wound down with me standing nervous and shirtless on stage at the Clay Center with the Charleston Ballet.

From just over the top of the belt, you could see the faint outline of unlikely ab muscles peeking over my belt.

This was never at all what I intended, but I have to say, I don’t think I looked half bad.

A note of thanks

Note: As always, there are too many people (and not enough space) to thank everyone who helped me learn something, but I would like to thank the staff and members of CrossFit WV, especially instructors Caroline Price, Nick O’Reilly and Ashleigh Woods.

Thanks to Sarah Plumley of Sarah’s Bakery on Bridge Road, my go-to baked goods guru; Kristi Wheeler at the United Way of Central West Virginia; the City of Charleston’s Public Works department; Astorg Motor Company, Tim Bailey and Becky Park for the use of their electric vehicles; Black Sheep Harley-Davidson in Huntington and Bob Powell at West Virginia Public Broadcasting for loaning me a helmet; Jeff Arthur at Mountain State Distillery; and Sarah Radow at the very cool Kanawha City Yarn Company.

A very special thanks to my friend Perry Bennett, who not only shot photos of me at the Spartan Race in Glen Jean but took on the duties of lead cheerleader and surrogate manager on race day. He literally walked me to the starting line of the race.

I swear I’d have gotten lost.

To anyone else I’ve neglected to mention, thank you for the support, encouragement and advice.

Finally, thanks to you out there reading. Thanks for the emails and the calls. Thanks for saying hello at the grocery store or on the street, just to let me know you saw something I wrote.

It means the world to know you’re there.