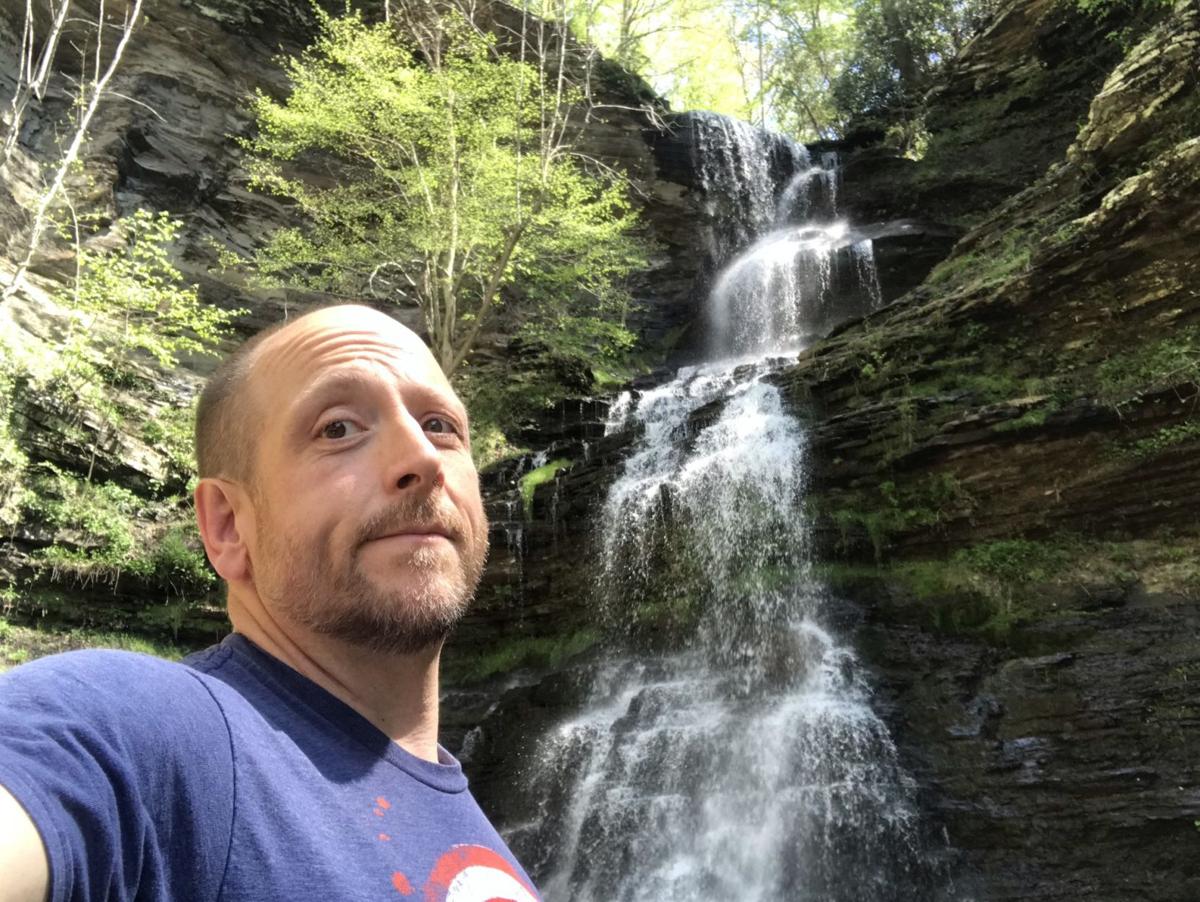 Reporter Bill Lynch kicks off May by getting back to nature and getting lost, again. 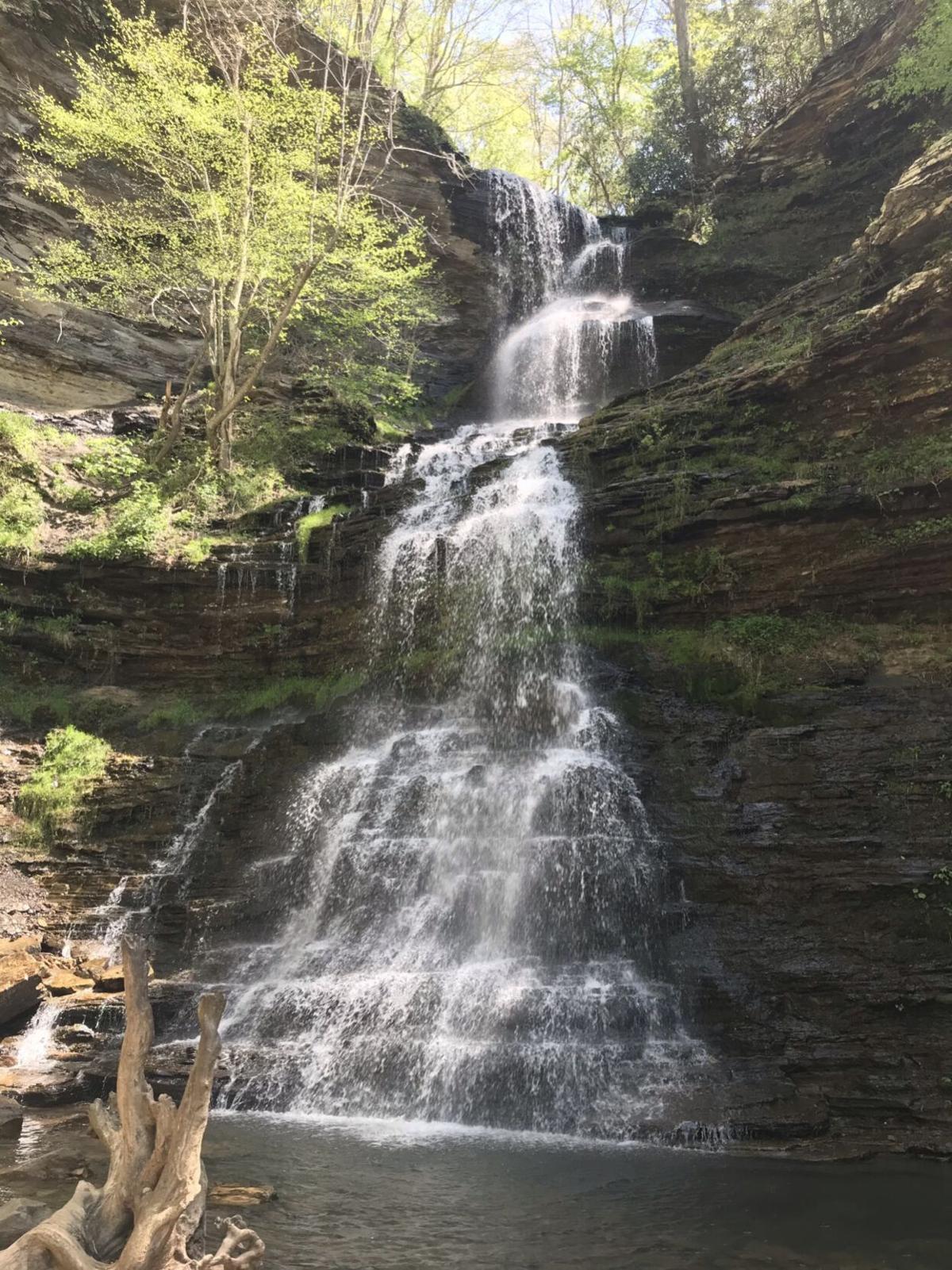 West Virginia is full of natural beauty. Reporter Bill Lynch has known this for years, but tended to just take other people’s word for it. This month, he’s chasing waterfalls in the state. This is Cathedral Falls. 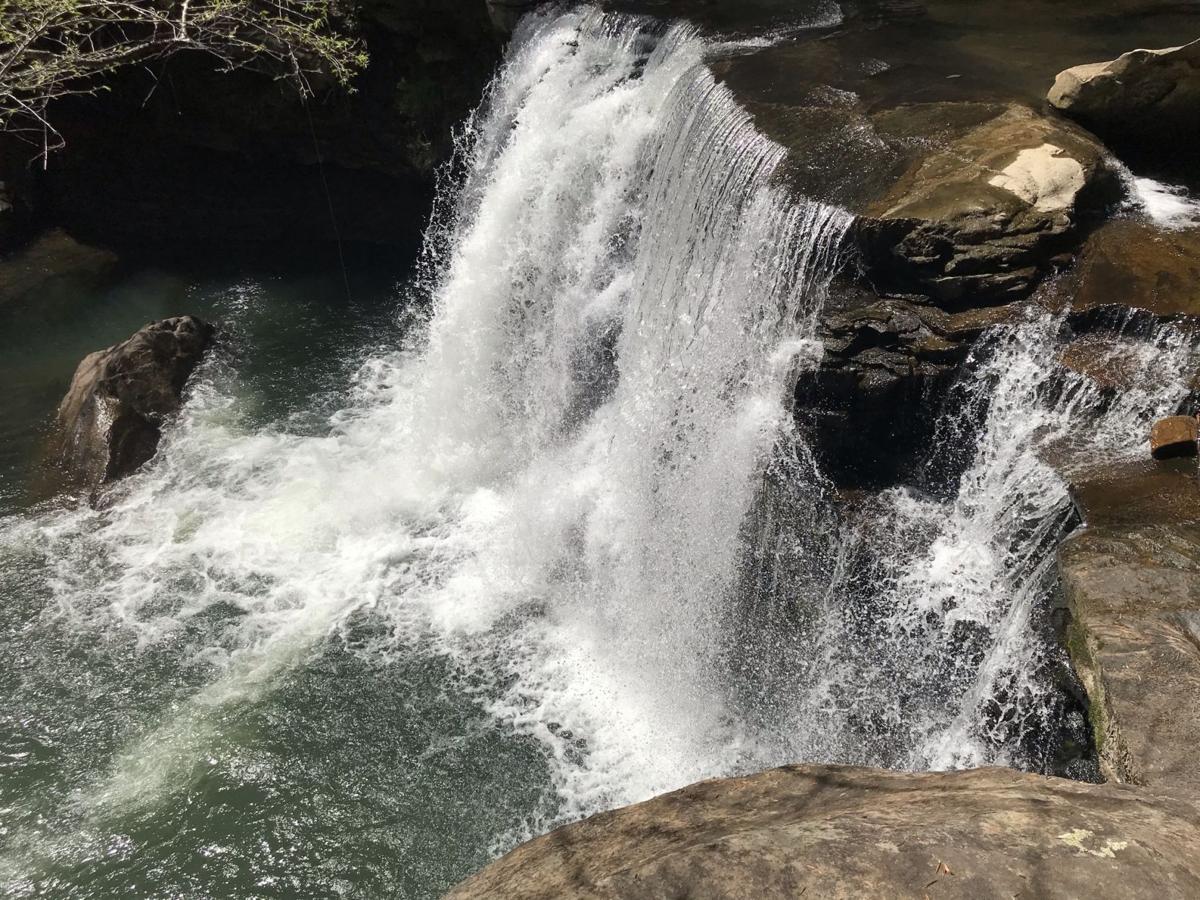 Wrong turns can lead to some good things. Reporter Bill Lynch went looking for one waterfall and ended up with about five others, including Mill Creek Falls at Hawks Nest State Park. 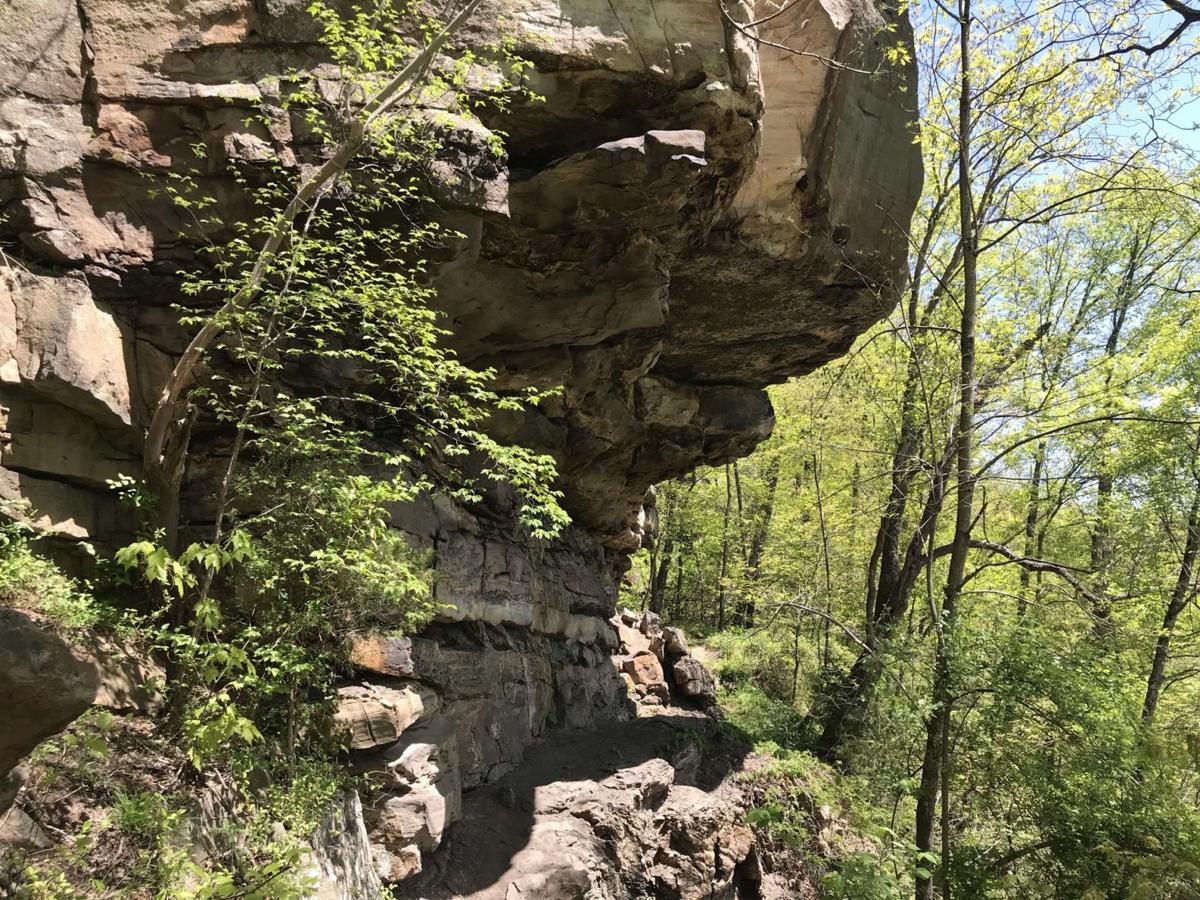 The Cliffside trail at Hawks Nest State Park is listed in FalconGuides as medium difficulty, but your mileage may vary, particularly if you’re not fond of heights.

Reporter Bill Lynch kicks off May by getting back to nature and getting lost, again.

West Virginia is full of natural beauty. Reporter Bill Lynch has known this for years, but tended to just take other people’s word for it. This month, he’s chasing waterfalls in the state. This is Cathedral Falls.

Wrong turns can lead to some good things. Reporter Bill Lynch went looking for one waterfall and ended up with about five others, including Mill Creek Falls at Hawks Nest State Park.

The Cliffside trail at Hawks Nest State Park is listed in FalconGuides as medium difficulty, but your mileage may vary, particularly if you’re not fond of heights.

ANSTED — A park ranger at Hawks Nest State Park found me wandering near an equipment garage and asked me how I was doing.

I’d just come off the Cliffside trail and — half babbling — I explained that my guidebook said the trail was supposed to be medium difficulty and if that was true, what was considered hard? Would a hard trail require sherpas or someone to fend off an axe-wielding bear?

He was patient with me.

I shook my head, sighed, and said, “I’m looking for a waterfall, maybe a couple of them. Have you seen them?”

He smiled. No, they hadn’t gone missing.

When I started “One Month at a Time,” the very basic premise was for me to do things I’d never done before and to try and learn about the things I didn’t know or didn’t know very well.

Sometimes, I have natural talent at something.

But mostly, I don’t.

I’ve had a lot of amazing experiences, made many new friends and occasionally, in spite of myself, learned things I used again.

But there’s always been one, big topic that I’ve never dug into, really — and that’s West Virginia.

I’ve lived in the Mountain State right at 30 years, the last 18 years in Charleston. And sure, I have a working knowledge of the history (Coal is good, but coal is also very bad); current politics (Count the cows, not the legs of the cows and divide by four); and even some of the culture (All hail the pepperoni roll!). But I haven’t seen a lot of the state.

It only seems that I have. Most of the state is a complete mystery to me.

Over the next couple of months, I’m hoping to rectify that some and explore the state in ways I never have. And that starts with waterfalls.

From what I’ve been told, there are at least 200 waterfalls in the state. It makes sense. We have a lot of mountains. Water flows downward. When that happens, you can get waterfalls.

Waterfalls didn’t mean much to me until lately.

I grew up in Giles County, Virginia, the home of The Cascades, a majestic waterfall and maybe the only bona fide tourist destination in the place where I grew up.

In high school, we took several class trips to The Cascades. I remember it as always being hot, humid, buggy and only worth the hike up to the falls because I got to stand off in the shade and watch girls splash around in their swimsuits.

After I moved to West Virginia, I seldom sought out a waterfall or any of the state’s natural wonders. I’ve never been much of an outdoors type, but over the last several years, I’ve become a little more interested.

But I still didn’t think about waterfalls until this winter, when I visited Blackwater Falls State Park to sled ride. I saw the falls at below zero. The sight took my breath away.

Raging through jagged, thick sheets of pristine ice, the falls were awe inspiring and terrifying — the kind of thing you looked upon and realized just how small and fragile you were.

Even as I left to go home, I knew I wanted to come back to see Blackwater Falls in the spring. Then I wondered about looking into some other falls. Maybe I’d missed out all along.

From a friend, I got a copy of “Hiking Waterfalls in West Virginia” from FalconGuides, which promised directions to 75 of the best waterfalls in the state.

I picked the falls at Hawks Nest State Park because the pictures looked cool, they were within a relatively short drive and because I thought I could stop at Burger Carte in Smithers on the drive back.

Burger Carte has a new burger called the “Mountain Mama,” which is made with fried green tomatoes, ramp aoli, smoked gouda and bacon. I expected I would also get fries and maybe a milkshake.

As usual, I was thinking with my stomach.

Off the trail at Hawks Nest, the ranger explained I’d made a wrong turn — or rather, that I should have turned off the Cliffside trail and onto the Fisherman’s trail, which would have taken me down to the bottom of the mountain to the lake, the dam and the waterfall.

“You could go back the way you came,” he told me.

That had little appeal. The trail had been more difficult than I’d expected, partly due to recent rains and partly because the tread of my old running shoes were nearly worn smooth.

Not long after I got on the trail, I’d skidded down a muddy stretch and nearly pitched off the edge of a steep drop.

It occurred to me that maybe I shouldn’t have come alone on a Tuesday. For all I knew, I might be the only person in the park stumbling around in the bushes looking for a waterfall.

The parking lot near the head of the trail had been largely empty — just one other car and a couple of folks on motorcycles who’d stopped to see the dam from the lookout.

If something happened, I could be in trouble. Cell phone reception could be categorized as “vintage.” If I fell, I thought, it might be a week before a nice mid-western couple discovered my raccoon-gnawed remains at the bottom of an embankment.

That’s a bit of an embellishment. The newsroom would notice I hadn’t checked in by Friday — probably.

Then the ranger told me there was another way. I didn’t have to go back. He told me to take my car into Anstead. There was a road that led to a dirt road, which would lead me right where I wanted to go.

Then the ranger handed me a pamphlet about West Virginia’s state parks, said I’d need to follow the road back to the parking lot to get my car.

“We have another trail, but it’s out of service right now,” he said, apologetically.

The half-mile walk back was a little nerve-wracking. There was a surprising amount of heavy truck traffic on the narrow road, but I found my way back to my car, looked at the guidebook I’d brought with me and saw where I’d gone wrong.

After rehydrating a bit, I followed the ranger’s instructions, went into town and found a turn that led me to a muddy gravel road meant as the start of a bike route.

This looked to be the place, so I parked in a secluded spot that was evidently popular with local teens in love, locked the doors and started off on foot again.

It was a much easier walk. The path was wide, pebbled and portions of it were built on a former rail line. Decaying trestles and rusting iron spikes poked up through the dirt.

Eventually, I noticed a paved road across the river running parallel to the dirt trail I was on and the parked cars of the local fishermen trying to catch a trout or two.

I was still on the wrong trail, but it seemed to be leading somewhere, so I followed it anyway.

After 2 miles, I came to the park’s waterfront facilities and the lake. I asked around and a park maintenance worker pointed me in the direction of the falls.

It was a smooth, dirt road off the paved road — just like the ranger told me.

I got to the waterfall at the end, admired it for a while and looked out over the peaceful lake.

Weary, I started the 2-and-a-half-mile hike back to my car, where I checked my pictures against the guidebook and realized I’d seen the falls I’d been looking for earlier.

I’d walked right past them and thought it was something else.

That last set of falls, I had no idea what they were called, but they weren’t in my book.

It was time to go home.

All things considered, my first trip out was a good one. I saw half a dozen waterfalls and spent an afternoon in the fresh air and sunshine, cut off from constant digital distraction.

The day could have been better if I could have gotten that hamburger, but I drove through Smithers around dinner time.

The line at Burger Carte was out the door.