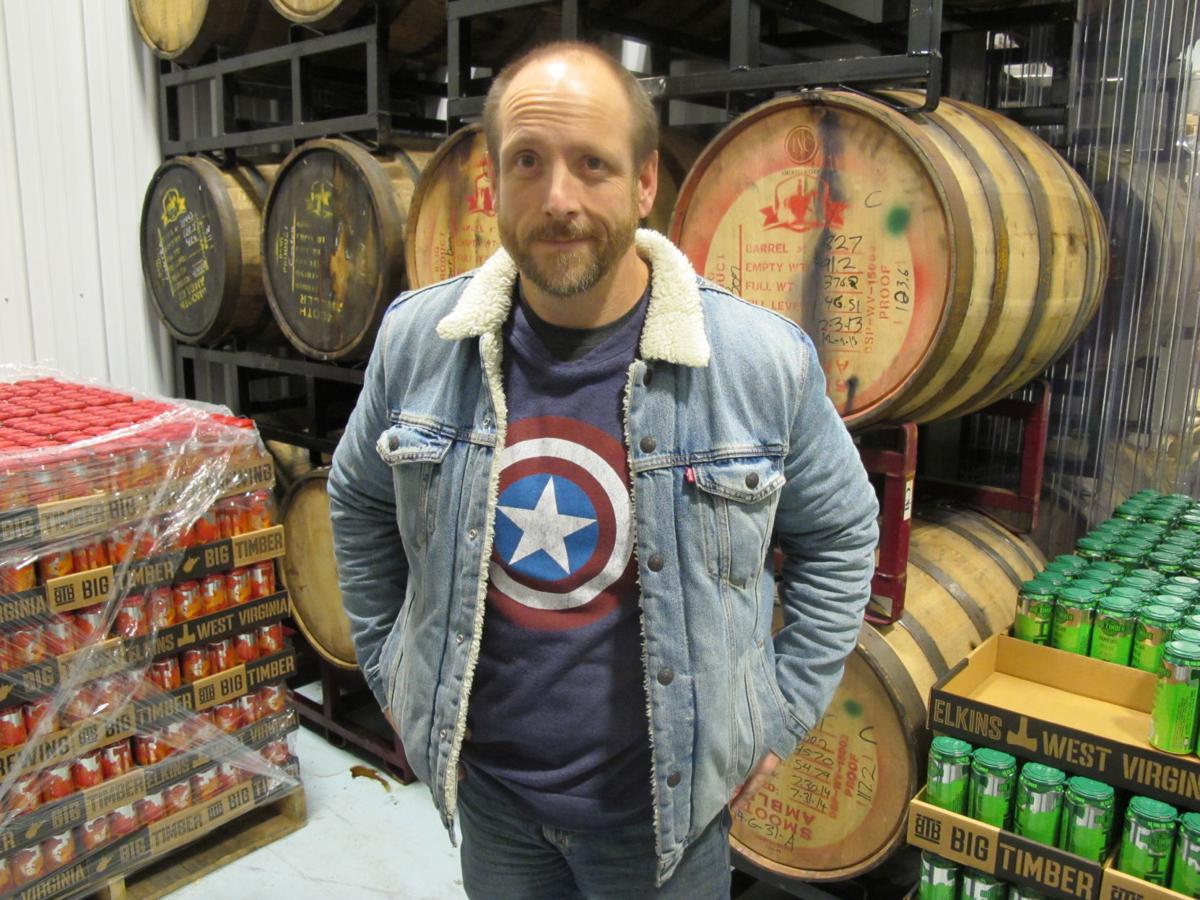 Reporter Bill Lynch takes a field trip to Big Timber Brewing Company in Elkins to learn the difference between brewing beer and distilling whiskey — at least, that’s what he said he was doing. 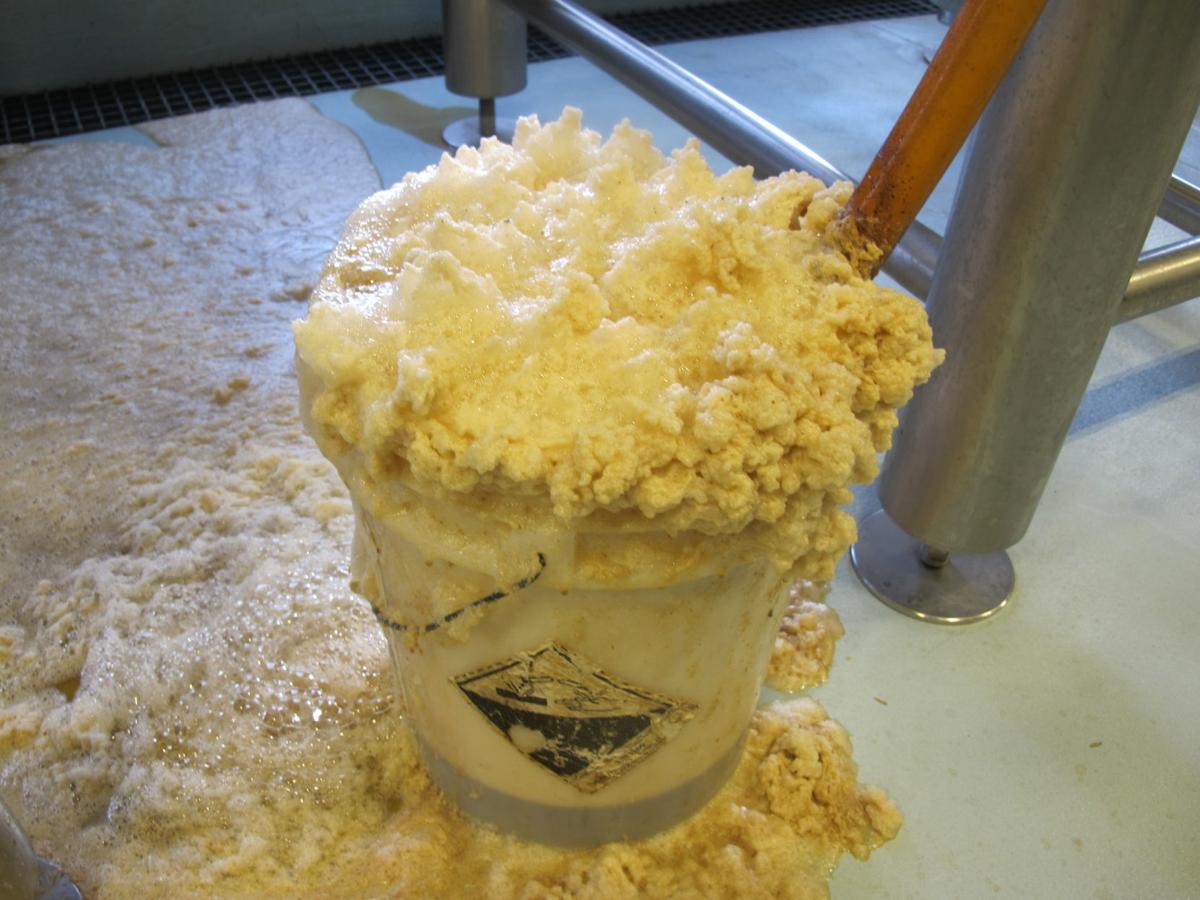 The foam is created by enzymes in the beer that are discharged along with CO2 during the beer brewing process. It's apparently harmless, but weird looking. 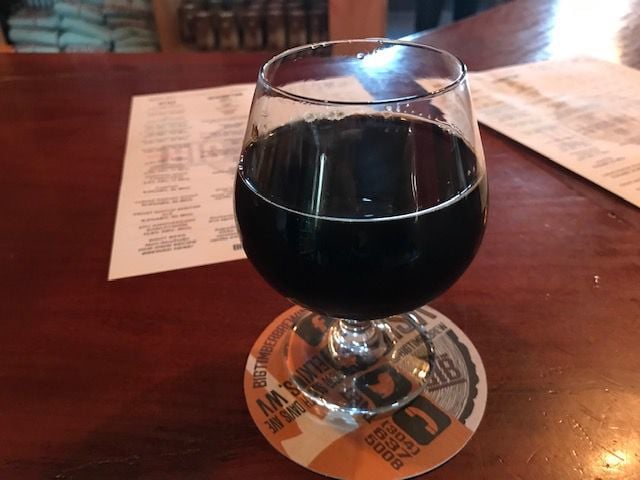 Big Timber's Lunar pastry stout was worth the drive up to the brewery's tap room in Elkins.

Reporter Bill Lynch takes a field trip to Big Timber Brewing Company in Elkins to learn the difference between brewing beer and distilling whiskey — at least, that’s what he said he was doing.

The foam is created by enzymes in the beer that are discharged along with CO2 during the beer brewing process. It's apparently harmless, but weird looking.

Big Timber's Lunar pastry stout was worth the drive up to the brewery's tap room in Elkins.

Foam bubbled up out of the five-gallon bucket. I kept expecting whatever was coming out of the plastic hose to top off the container and then spill out onto the concrete floor, maybe take on a life of its own and attack, but there were only just more bubbles.

I looked over at Big Timber’s head brewer and president Matt Kwasniewski, my guide, and asked, “So, what is that?”

He smiled. I hadn’t asked a particularly smart question, but at least he could show me something besides the aisle of gleaming, stainless steel brewing equipment at Big Timber Brewing Company in Elkins.

“It’s CO2,” he said and pulled the hose out of the bucket.

Nothing appeared to be coming out of it.

Matt held the end of the hose under his nose, then pulled it away, making a sour face.

“Whew. I got a good whiff there,” he said, shaking his head. “That was a good burn.”

He offered the hose to me. Cautiously, I shallowly sniffed and smelled sour and bitter gas. It smelled a little “hoppy” — full of hops, like an open can of craft beer — but I didn’t breathe too deep.

Wait? Where are we?

Big Timber isn’t a whiskey distiller. While my month spent learning about whiskey with Jeff Arthur at Mountain State Distillery was progressing, it was moving slowly.

Alcohol isn’t made overnight. It can take a week or three. While I waited to move on from the mash stewing in the vat in Jeff’s shop, I looked into some of the history of whiskey.

Whiskey is a late comer to the alcohol family. While no one is precisely sure when spirits were first distilled, it’s thought the Babylonians might have figured it out in the second century B.C. — but that’s a big might. There aren’t reliable records until somewhere during the 13th century.

They distilled wine for medicinal purposes in Italian monasteries, but the potent “aqua vitae” caught on, eventually spreading everywhere you had monks with too much time on their hands.

Distilling spirits eventually jumped from the ecclesiastical and the scientific to the bored and poor, looking for a cheap drink.

No surprise it caught on in Ireland and Scotland, which was teeming with poor people, who experimented and refined the process, eventually coming up with what became scotch in the 16th century.

Gin arrived on the 17th. Bourbon didn’t show up until the 18th and nobody started drinking Jagerbombs until the late 1990s.

That didn’t catch on so much as refuse to go away.

Learning about other kinds of booze

As I was reading up on the history of alcohol, Healthberry Farm in Randolph County contacted me to let me know that their winery had won a silver medal at the Mead Crafters Competition, organized by the National Honey Board. They earned the award in the Sweet Varietal Mead category for their Honey River Basswood Mead.

I had no idea what any of that was. I’d tried honey mead once, I think, and remembered two things about it. According to Norse mythology, the all-father Odin had stolen honey mead from giants, which gave whoever drank the stuff the ability to write good poetry.

I also remembered the stuff I got at the liquor store tasted like vinegar, but maybe I’d picked up the rotgut variety — it wouldn’t be the first time. Honey River Basswood Mead sounded interesting, and visiting the winery gave me a second reason to drive to Randolph County.

On my way to the farm and meadery (winery that produces mead), I realized I could stop in at Big Timber Brewing Company to visit the brewery where they make my favorite beer, Big Timber Porter, and then check out the brewery’s tap room.

That was my plan, at least.

I got a slightly later start than I should have, and by the time I got to the charming little town of Elkins, it was already pushing past 3 p.m. I got turned around on my directions, wound up at the tap room before the brewery, then got sent back to the brewery to take the tour with Matt.

At least on a Friday afternoon, the brewery was staffed by three guys in Big Timber shirts. While it was vastly larger than Mountain State Distillery, Matt promised me it was tiny.

“Sam Adams or Sierra Nevada dump out more beer in a day than we make in a month,” he said.

A lot of what they did was watch over vats, monitor temperatures and clean up.

Other than the occasional, small puddle of brownish water near a waste bucket, the place looked pretty neat and tidy.

Matt told me that safety was job No. 1, but so was keeping everything clean.

“Distilling is a little more forgiving,” he said. “If something isn’t perfect before it goes into the mash, distilling will probably take care of it.”

The heat will kill microbes and bacteria, if the alcohol doesn’t.

With brewing, impurities and irregularities might not be dangerous, but they might affect the flavor and color of the beer.

“We have to make sure everything going in is exactly what we want and not what we don’t,” he said.

Similar, but not the same

Brewing was a lot like the first half of distilling. Grains (typically, malted barley with rice or wheat) are cracked and added to vats of water with yeast. The yeast devours the sugars in the grains, which produces alcohol and gas.

The gas is vented out through the tubes, along with a little liquid which creates the foam in the buckets.

What remains in the vat is called the “wort.”

The kinds of grains used and how they’re prepared affects the flavor, as does the length of time they’re steeped in the vats and whether hops — a bitter flower — is added to the beer.

“Hops gives the beer its fruitier flavors and its aroma,” Matt explained.

Some beers have a heavier hops flavor. Others don’t. The porter, which I adore, is more malty than bitter.

For generations, one of the main traits that separated beers from whiskeys (aside from taste) was alcohol content. Most American beers were around four to five percent alcohol (alcohol by volume or ABV), the equivalent of 10 proof, while whiskeys started at 40 percent alcohol or 80 proof.

Over the past couple of years, craft beers have started to give liquors a run for their money as far as how much alcohol is in the drink. Some craft brews have upward of 12 percent alcohol, and a few specialty beers are 100 proof or 50 ABV.

You don’t do that. That kind of thing is measured out like whiskey.

Matt shrugged and said the high ABV is achieved through freeze distillation or fractional distillation. The temperatures of the beers are lowered to right at the freezing point of water to create ice crystals, which are separated from the alcohol that has a lower freezing temperature.

Matt said, “We don’t do that and really, at some point, you have to wonder what’s really a beer.”

We talked a little about how Jeff at the Mountain State Distillery wanted to be able to take his whiskey to festivals and tastings, as well as maybe offer it by the drink — not unlike the brewery’s tap room down the street.

The brewer sympathized and said, “It’s not easy. We have to get permits for everything. There’s a lot of hassles.”

But he added that the tap room had been a real game changer for them.

“It helped pay for all of this,” Matt said, looking around the brewery, though he added he didn’t expect for them to expand further anytime soon. “Maybe a little regionally, eventually, but we’re pretty happy being a West Virginia brewery.”

After the tour, I stopped in at their tap room in Elkins to try something the brewery didn’t can.

With string band music being played at a table by the window and a friendly dog at my feet, I ordered a nine-ounce glass of Lunar pastry stout, which had an ABV of 12 percent (24 proof) and tasted sweet, syrupy and delicious.

I also bought a T-shirt.

But I took a little too much time at the tap room. By the time I got back on the road to drive to Dryfork to Healthberry Farm, the light was going.

I couldn’t find the farm and then I lost cell service.

Hungry and concerned my GPS would take me into Pennsylvania again, I turned around and went home.

I passed along my apologies to Healthberry Farm and promised I’d check in with them again.

Meanwhile, I visited the Wine Shop at the Capitol Market, figuring I could at least try the award-winning honey mead. After a quick look, owner Ted Armbrecht told me, “We’re just out. I’ll have to get more. You should check back. It’s good stuff.”