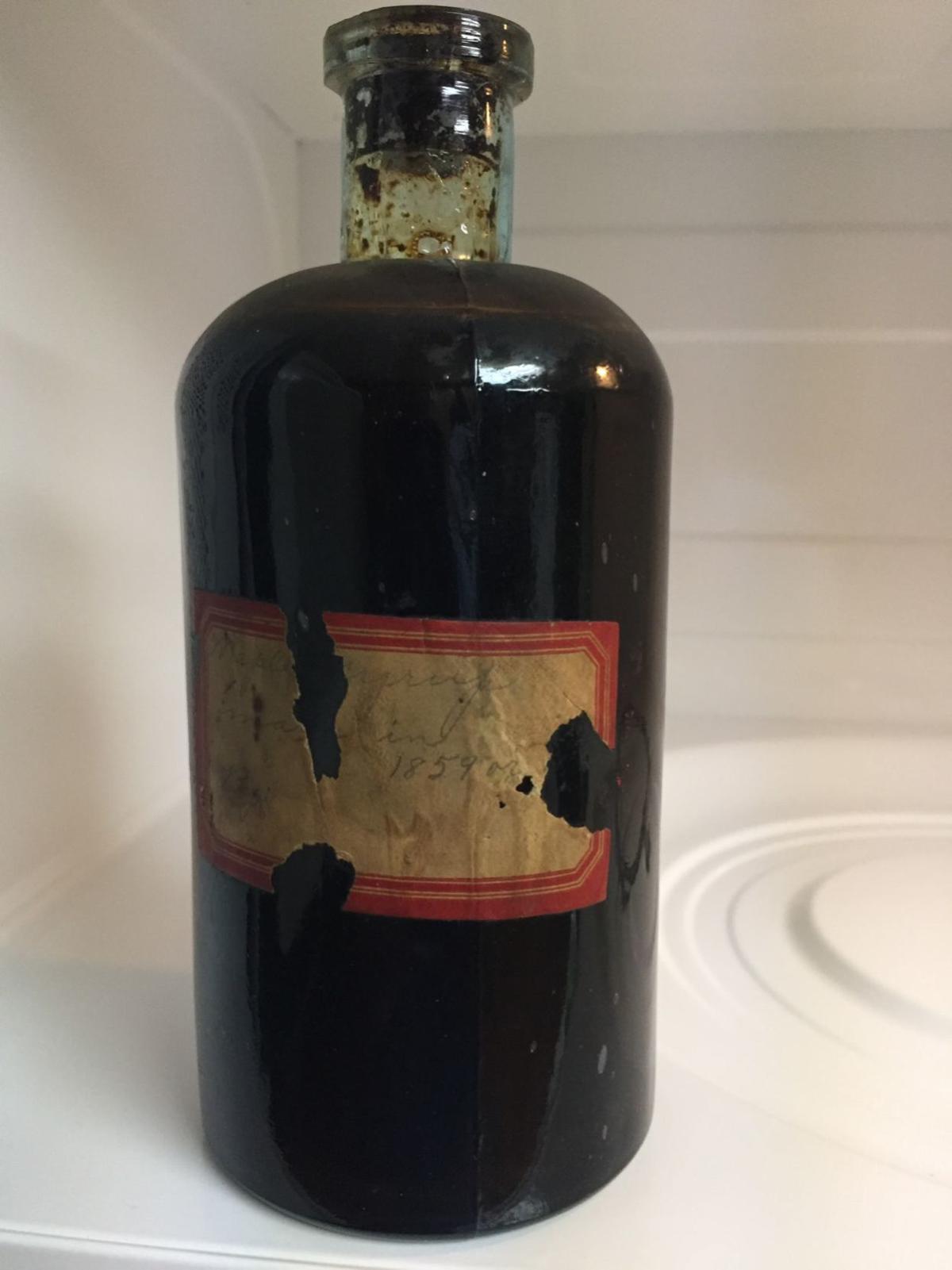 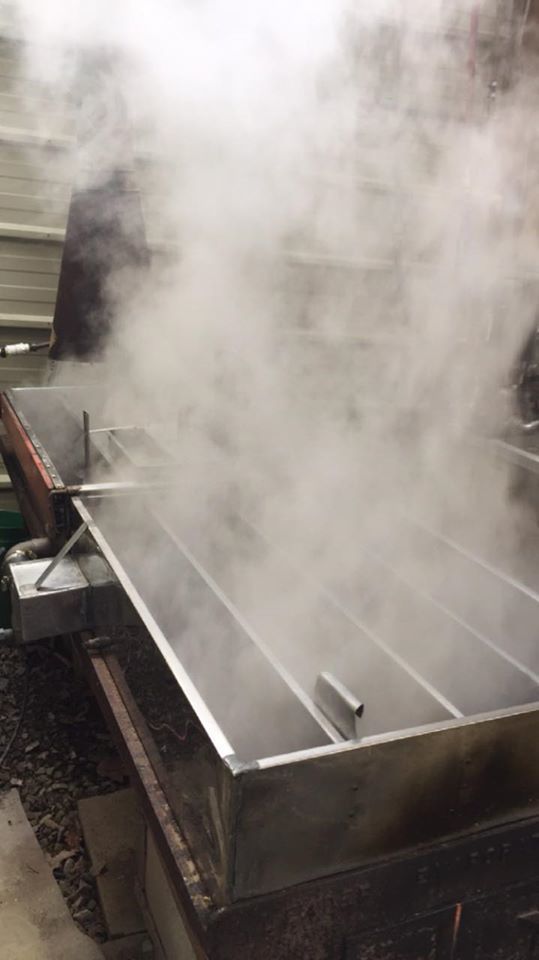 Ronk Family Farm uses a wood-fired evaporator, which boils down maple sap into syrup. It’s a slow, but sweet, process.

Ronk Family Farm uses a wood-fired evaporator, which boils down maple sap into syrup. It’s a slow, but sweet, process.

During Maple Days at the Ronk Family Farm, in Lincoln County, Paul Ronk wanted to show off a bottle of maple syrup.

It was very old.

I’d come out to the Ronk Family Farm to learn something about maple syrup. It was cold. I was under-dressed and struggling to keep my stomach from rumbling.

The air smelled of brown sugar, and Paul Ronk’s daughters were inside the warm cabin serving up pancakes and sausage for just a donation.

I had to remind myself that I’d already eaten — a bowl of warm oatmeal, flavored with one sliced banana and sweetened with a no-calorie sugar substitute that was straight out of a high school chemistry set.

Standing in the fog of the maple goodness, it was hard not to think about short stacks of piping hotcakes drenched in syrup and butter.

Paul Ronk said, “I probably have the oldest bottle of maple syrup in the world.”

He repeated this a couple of times over the morning. He was proud of the bottle. It was a genuine curiosity.

Ronk added that neither he nor any of his ancestors produced the syrup, which was black as tar.

“It wasn’t even made on this farm,” he acknowledged.

It seemed unlikely to have come from any trees still living, but Ronk said it was harvested in Lincoln County — or at least whatever Lincoln County was called in 1859.

“I got it from a guy at the Sunoco station down the road,” he explained.

Among other places, Ronk sells his family’s syrup at the closest gas station to his house in Lincoln County. One of his neighbors saw his syrup for sale and left the antique bottle with the clerk to give to him.

The old bottle was corked and still good, he said. You could open the bottle and pour it over a waffle, if you wanted.

“We had a scientist come up and test it with a syringe,” he said.

A long needle was pushed through the cork top and a small amount of dark syrup was extracted. Ronk said the researcher verified the age of the syrup and they tasted it.

“It had more of a butterscotch flavor,” he said.

He wasn’t sure if that was from the age or just in how they made the maple syrup 150 years ago. The process has changed somewhat, become more refined, and there are new tools to make the results more consistent, but it’s still slow and labor-intensive.

To get at the maple sap, metal taps are put into the trunks of maple trees. Harvesters will often use drills to make shallow holes through the bark and outer layer of the wood to get to the sap.

The metal taps are attached to plastic hoses. Gravity drains the sap from the taps, which is then carried to a bucket or tank where it’s stored before Ronk or some other maple syrup producer begins the boiling process.

Some producers, like Ronk, use a reverse osmosis machine that removes about half the water the sap.

“That speeds up the process quite a bit,” he said.

But during the Maple Syrup Days event, with visitors coming out to watch him make the syrup, he skipped that step.

The collected sap came to the wood-fired evaporator through a hose.

“Here, try this,” Ronk said as scooped a tiny paper cup of the sap water from the evaporator.

He handed it to me. I took a sip. The water tasted faintly sweet.

Ronk shrugged and said, “Some people can. I can’t.”

A young woman in black leggings, a headband and wearing a heavy coat said you could buy maple water at the grocery store, where it’s sold as an energy drink.

“It’s just maple sap,” she said. “It has all the minerals and things in it.”

Ronk liked the idea of that. There was less work involved and would stretch out his farm’s maple resources further. Those Vermont guys don’t miss a trick.

Sap poured steadily into the boiling waters of the evaporator.

This particular piece of equipment looked like a long metal tub that had been divided up into eight connecting chambers. It resembled a metal maze.

As the sap heated and boiled, somehow, the sugary syrup was pushed through the different channels from the back end to the very front, where it continued to cook down until it reached the desired consistency.

To figure out how far along his batch was, Ronk used a hydrometer, a device that measures “the specific gravity [or relative density] of liquids; that is the ration of the density of the liquid to the density of water.”

I’d seen something similar when I’d spent time with Jeff Arthur at Appalachian Distillery in Charleston, but this looked less sophisticated.

In a small metal pitcher, Ronk scooped up some boiling syrup and then dropped the hydrometer down through the top.

If it floated, this indicated that he was on the right track.

“It’s too early,” he said, shaking his head.

Even if the hydrometer floated, Ronk said the finished syrup had to be 66 on the Brix scale, which represents the number of grams of sucrose present in 100 grams of liquid.

Brix can be used to measure other kinds of sugary liquids, like juice (20 Brix), corn syrup (25 Brix) or honey (70 to 88 Brix), but those numbers represent industry standards that may not mean much to the average consumer.

Real maple syrup is a little thinner than the imitation stuff made with high fructose corn syrup, which tends to act more like honey when poured on a pancake or waffle.

Without preservatives, real maple syrup only has a shelf life of a few weeks at room temperature, but Ronk said you can refrigerate it for months.

“Or just put it in your freezer. It won’t freeze,” he said.

I tried that with a bottle and sure enough, the syrup didn’t freeze. Of course, I didn’t want to use it straight from the freezer when I made pancakes.

After the syrup is cooked down, minerals and solids from the tree (like tiny pieces of wood and grit) are filtered out and the syrup is bottled, sealed and distributed wherever farm-made maple syrup is sold, which includes the occasional gas station.

Ronk and I stood out underneath the roof of the sugar shack, next to the evaporator through most of the morning. He kept an eye on the equipment, answered questions and occasionally showed somebody his antique bottle of syrup.

He seemed fine in the cool air, but I couldn’t feel my toes. My wool socks had failed me and I shivered.

Around noon, I went inside the cabin where Ronk’s daughters and a few friends were serving pancakes and sausage and selling jugs of syrup and jars of maple apple butter — one of their best-sellers, I heard a woman tell someone.

Almost free pancakes had been a pretty good marketing strategy. More than a few people opted to buy a bottle of syrup or a jar of apple butter before they left, but I just wanted a taste.

After warming my back pockets by the wood stove, I asked for a single, small pancake. You could get more.

The women at the counter shrugged and gave me what I asked for.

I doused it in syrup and ate.

The syrup was as good as I’d ever had — and, if it hadn’t seemed greedy, I’d have gone back for seconds and probably thirds.