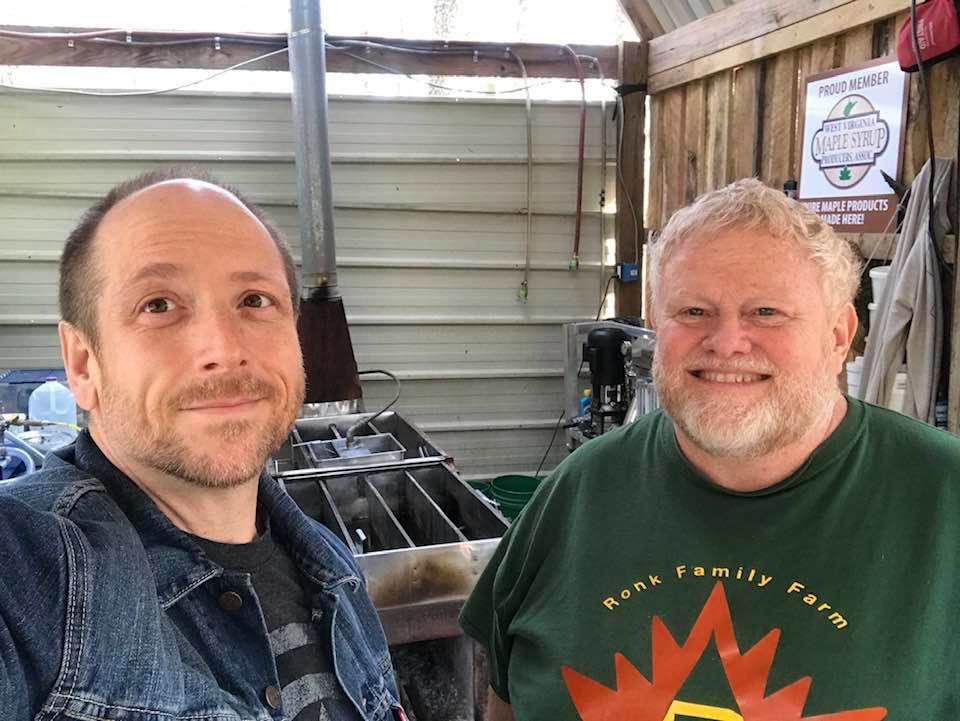 Reporter Bill Lynch (left) has spent time learning about maple syrup on the Ronk Family Farm in Lincoln County with Paul Ronk. The sugaring season is pretty much over, but there’s still a lot to learn. 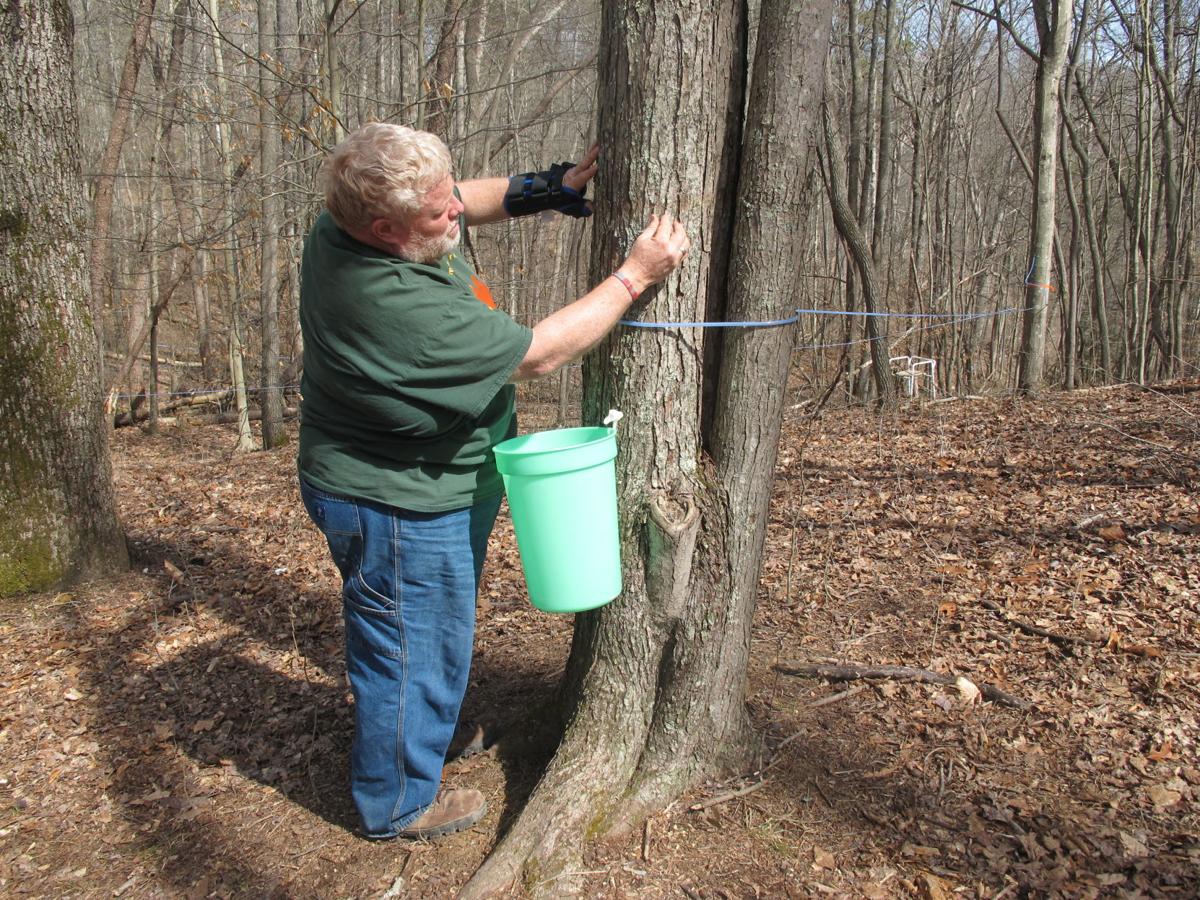 Paul Ronk said his favorite part of making syrup is educating kids about the process. He said he believes agricultural products like maple syrup could be the key to providing a way for young people to stay in West Virginia. 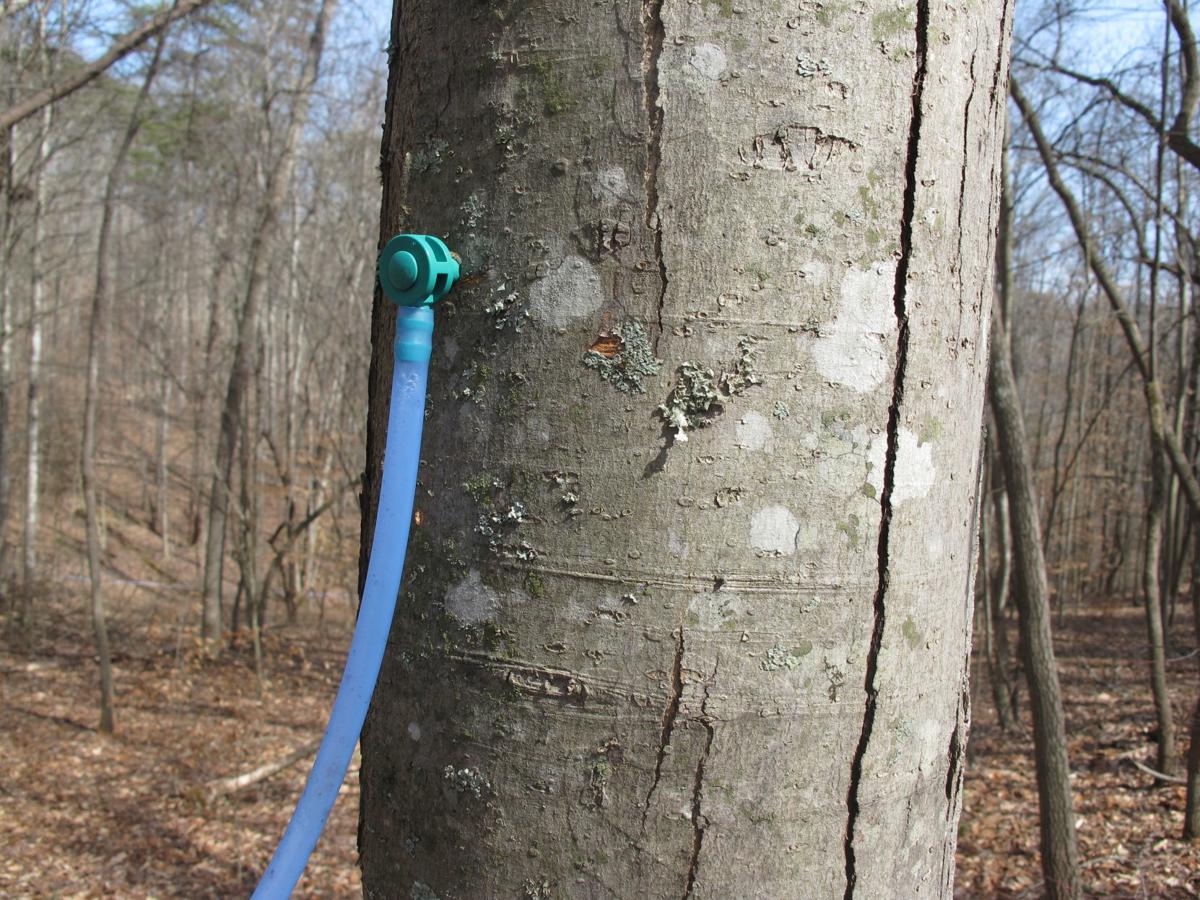 Maple syrup maker Paul Ronk said one of the hardest parts to getting started with making syrup is learning which trees are which. Leafless trees in winter can look very similar.

Reporter Bill Lynch (left) has spent time learning about maple syrup on the Ronk Family Farm in Lincoln County with Paul Ronk. The sugaring season is pretty much over, but there’s still a lot to learn.

Paul Ronk said his favorite part of making syrup is educating kids about the process. He said he believes agricultural products like maple syrup could be the key to providing a way for young people to stay in West Virginia.

Maple syrup maker Paul Ronk said one of the hardest parts to getting started with making syrup is learning which trees are which. Leafless trees in winter can look very similar.

Paul Ronk’s rooster glared at me from the yard and then crowed.

Standing on the front porch, waiting on Ronk inside the house to get his boots on, I got the impression that the local rooster had taken a strong dislike to me.

I have no idea what I did, but while I stood there, waiting on Ronk to take me up the hill to his sugar shack to continue my tutorial on maple syrup making, the rooster purposefully crossed from the far corner in front of the porch to right where I was standing.

He stomped all the way (if chickens stomp), turned toward me and crowed again and again.

I put my hands up.

He kept at it.

A group of hens gathered around him, and I wondered if I was going to be allowed off the porch, but then Ronk turned up from around the back of the house. The chickens scattered and the two of us made our way toward the family maple syrup operation.

Maple season was over at the Ronk Family Farm. The red maples had already budded. Anything taken from those trees at that point, Ronk told me, would be sour when it was rendered down from sap to syrup.

In a good year, he could get around 50 gallons. Eighteen was far short, not even half.

For Ronk, the season had started late.

And he’d been done for over a week.

His season usually ran for a month, but leap year or not, his had come to an end a bit shy of that.

Maple farms to the north, like in Vermont, would have weeks to go. Even in West Virginia, in the higher elevations, Ronk said they probably had a little more time — a few more days, another week or so, maybe.

He sighed. It was hard to find the time.

He laughed, “Don’t let anybody tell you different. Making maple syrup is a lot of work.”

A piece of Paul’s story

It was work he never intended to do on his own, anyway. This was supposed to be something Paul Ronk and his son, Jacob, did together, as a side business. But Jacob Ronk died three years ago — three years after Paul started harvesting sap from their trees.

His death had been a sad accident.

“He choked on a hard-shell taco,” Paul explained. “He stopped breathing.”

Paul said his wife managed to dislodge the shell, but as his son was coughing up the shell, he gasped and sucked food fragments into his lungs.

He died in the hospital four days later. He was 22.

Paul Ronk said he remembers his son as he makes the syrup, but he thinks about Jacob often, anyway.

This maple syrup making side business is part of Ronk’s eventual retirement plan. It has been for about a dozen years.

The Ronks got started through helping a friend in Licking County, Ohio, who collected sap the old-fashioned way — with shiny, metal taps drizzling out the pure sap into buckets.

The buckets would fill up and need to be emptied into a tank, which would then drain into an evaporator.

Ronk said there were 800 buckets hanging on trees.

“You’d spend all day going out, collecting them, emptying them and taking them back,” he said.

Ronk laughed and said it sounded worse than it was.

When they first began to make their own syrup, Ronk copied what he’d learned in Ohio. But West Virginia, and Lincoln County in particular, was hillier than the center of Ohio.

“My first year, I fell down hauling the buckets,” he said. “I almost said, ‘That was it.’”

Instead, a few months later at the State Fair of West Virginia, Ronk saw a demonstration for tapping maple trees using plastic tubing. Using gravity, the tubes carried the sap to wherever you wanted.

He had never seen anything like it, but decided that was much better than what he was doing — safer, more efficient and easier.

They tapped the trees and switched over to the tubing.

A short distance away from his sugar shack, Ronk showed me the blue tubing. He said he kept it up year-round.

The deer leave the tubes alone, though they sometimes stumble or trip through a line in the dark. Bears ignore the lines until they don’t, and then they’ll tear into one.

Coyotes and squirrels will chew on them sometimes, but Ronk said it was easier to leave the lines up year-round and make repairs than take them down at the end of the season.

Whether you keep the lines up or not, the lines have to be cleaned out to prevent bacteria from getting inside and feasting on the sugar, gumming up the tubing.

In Canada, the real maple syrup powerhouse in the Western Hemisphere, Ronk said they flush their tap lines out with food grade alcohol.

It kills the bacteria and evaporates.

“But we can’t do that here,” he said. “You do that here and somebody catches you, you’re out of business permanently.”

In the U.S., maple syrup makers use a bleach or peroxide solution, which accomplishes the same thing as the alcohol, though Ronk said he thought the Canadian method was probably better.

“I barely knew what I was doing at first,” he said. “I had to learn my trees.”

In spring, summer and fall, trees to a less-educated eye are easier to pick out because of their leaves. A maple leaf is very distinctive.

In the gray gutter of winter, one bare tree looks a lot like the next bare tree — a thorny piece of wood sticking up out of the mud.

“The first year with the taps, I had a guy come out and ask me if I was getting anything out of that poplar tree I had a tap in.” Ronk shook his head and laughed. “Oh, that was embarrassing.”

He learned. Maple tree bark is crustier and crackled, particularly as it matures.

He said it also helped that he spent his summers cutting down poplar and the much-reviled beech trees. It’s easier to spot the maples if the junk trees aren’t in the way.

“The only thing they’re good for is fuel,” he said.

Beech trees, Ronk told me, grow quickly and crowd other trees. Maple trees like to spread their branches, but won’t if they’re closed in.

A future in the trees

Ronk’s family got into the maple business late, though early in West Virginia.

Maple syrup is just a side business for him. Like a lot of small West Virginia farms, the Ronks make a little money from this crop or that crop.

He also has a night job he’s kept for over 20 years.

“I take care of an elderly autistic man with Down syndrome,” he said. “I love him. He’s part of my life and I’m part of his.”

Ronk said the maple business was a good business for young farmers to get into.

He said he thought that was enough for someone to make a fair living just off the syrup, though a smart farmer would have other streams of income from his property. There were plenty of things consumers wanted — produce, candy, soap.

Sycamore syrup could be the next big thing. Ronk said they could harvest it right after maple season, and there was money to be made with black walnut syrup.

“That’s big with the foodies in restaurants,” he said. “They use it for cooking, and it ain’t cheap.”

Ronk said a gallon goes for $300 wholesale, but walnut trees don’t have as much sugar as maple trees. It takes a lot of gallons of sap to make a gallon of syrup — but with the right equipment and enough trees, there could be a small fortune in that.

It was a way, he thought, to keep young people from leaving the state.

Of course, the physical labor part is really just several weeks out of the year and the actual sugar season is only about a month.

Ronk has to spend some time selling his syrup or taking it to places that carry it, a few weekends here and there, some festivals.