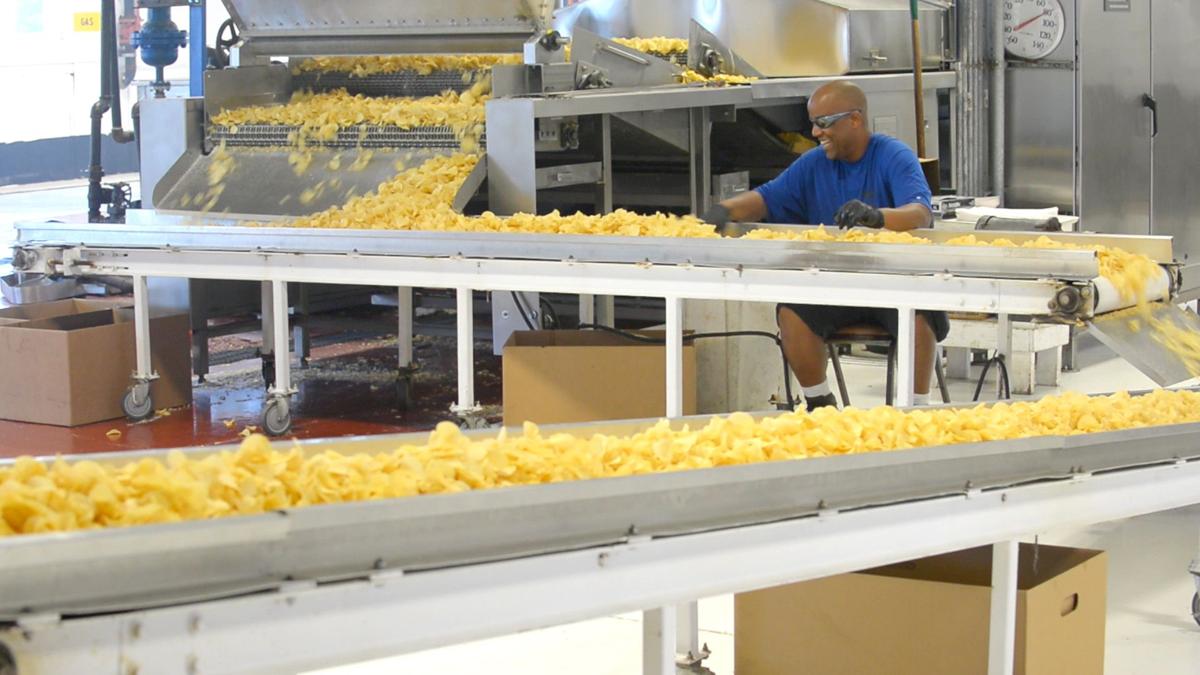 An employee of Mister Bee sorts through freshly fried chips as part of quality control before the chips are bagged. Last year, the small factory on West Virginia Avenue in Parkersburg produced nearly six million bags of potato chips. 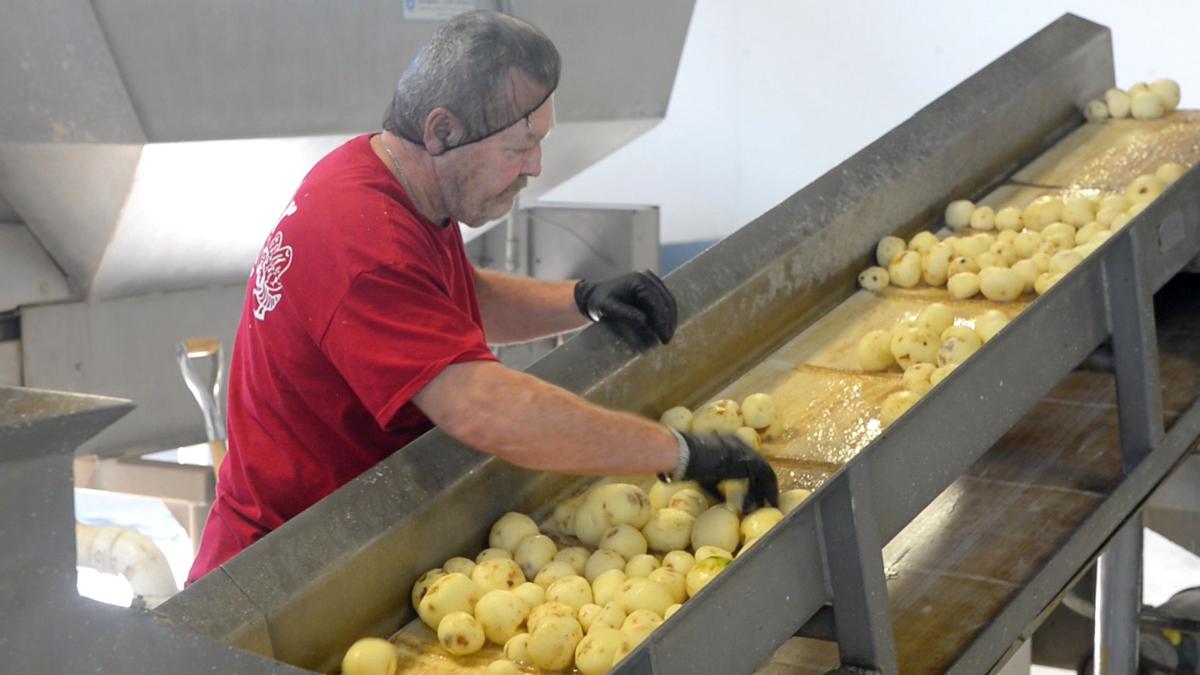 An employee of Mister Bee sorts through potatoes before they get sliced and fried. As many as 90,000 pounds of potatoes can flow through the 30,000-square-foot Mister Bee headquarters on any given week. 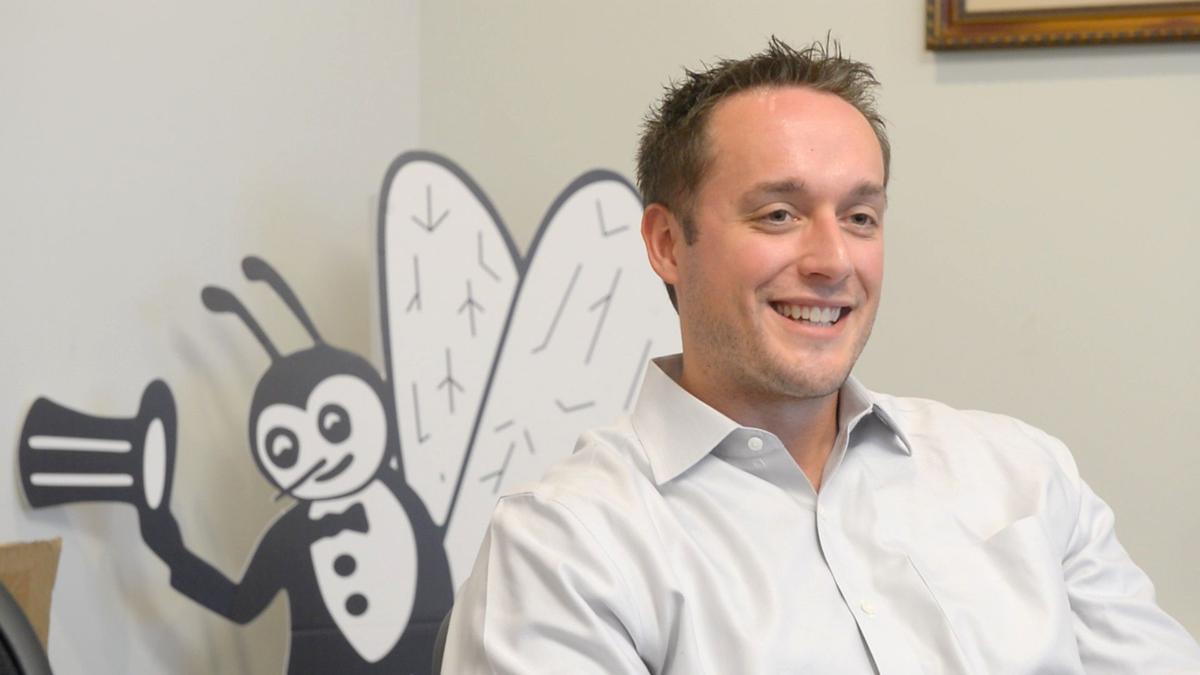 Greg Reed, 27, grew up eating Mister Bee potato chips, a brand that dates back to the 1950s and bills itself as “the only potato chip made in West Virginia.” Reed, along with five other individuals, purchased the company in September 2015. “They’re just different,” he says of the iconic chips. “They almost taste like something you could have made on the stove at home.”

An employee of Mister Bee sorts through freshly fried chips as part of quality control before the chips are bagged. Last year, the small factory on West Virginia Avenue in Parkersburg produced nearly six million bags of potato chips.

An employee of Mister Bee sorts through potatoes before they get sliced and fried. As many as 90,000 pounds of potatoes can flow through the 30,000-square-foot Mister Bee headquarters on any given week.

Greg Reed, 27, grew up eating Mister Bee potato chips, a brand that dates back to the 1950s and bills itself as “the only potato chip made in West Virginia.” Reed, along with five other individuals, purchased the company in September 2015. “They’re just different,” he says of the iconic chips. “They almost taste like something you could have made on the stove at home.”

PARKERSBURG — Every time Greg Reed sees the crisp white bubbles swell over a batch of boiling potatoes his mind takes him back home.

The earthy smell of the potatoes and the rising mounds of simmering foam transport him away from a bustling potato chip factory in Parkersburg and back to another time.

The sights and the smells of the Mister Bee potato chip factory take him to the kitchen in his childhood home in Doddridge County.

“It’s just like when your mom would boil potatoes on the stove at home,” he said, gesturing across the top of dozens of freshly sliced potatoes cooking as they whizzed by on an assembly line conveyor belt.

Reed, 27, grew up eating Mister Bee potato chips — a brand that dates back to the 1950s and bills itself as “the only potato chip made in West Virginia.”

The chips, the factory, the cartoon “Mister Bee” logo printed on every bag all bring back a certain nostalgia, a nostalgia he wanted to keep alive, breathe new life into and share even more.

That’s why, when an opportunity presented itself last year to become one of the partners and the president of the company, it was an easy sell for him.

“It was just an opportunity,” he said.

An opportunity he saw to join in with friends of his who also own the company, and take a West Virginia staple to new heights.

As many as 90,000 pounds of potatoes can flow through the 30,000-square-foot Mister Bee headquarters on any given week.

The potatoes are harvested and loaded into a truck from a farm in Wisconsin on Mondays and arrive in Parkersburg the next day.

The potatoes are machine sorted, skinned, sliced, washed and baked inside the factory.

Moving down the conveyor belt, the finished chips are sorted into bag-sized bins before they are packaged and boxed to be shipped.

Assembly line workers diligently watch over each step of the process to ensure quality and efficiency.

A packaging machine fills and seals each bag before an assembly line worker grabs the bags to be weighed and boxed.

The cut of the chips may vary from bag to bag, he said. One batch may be a little thicker than the next — setting Mister Bee chips apart from the mass-produced big brand names.

Mister Bee chips can be found in stores throughout the state in flavors including original, barbeque, dip style, sour cream and onion, honey barbecue and jalapeño. Mister Bee also recently rolled out a new kettle chip.

Reed, a graduate of West Virginia University’s College of Business and Economics, has been working with his team to help boost the Mister Bee brand in the last year.

He and his team have formed relationships with retailers like Wal-Mart, Kroger, Shop n’ Save and convenience stores throughout the state. Whether you’re inside the WVU Mountainlair student union or the Super Weenie hot dog cart at Charleston’s Davis Park, fans can find Mister Bee chips throughout the state.

At some major retail locations, Reed said, as many as 800 bags of chips are selling each week.

Several other partnerships with retailers and convenience stores throughout the state are currently in the works, he said, and should be announced soon.

The chips are also being sent out into parts of Eastern Ohio, Kentucky, West Virginia’s Eastern panhandle, Cumberland, Maryland and Winchester, Virginia.

He also has his sights set on tapping into parts of West Virginia that don’t currently have a lot of Mister Bee product.

“If we can make us No. 1 just in the state of West Virginia, that gives us a long way to grow,” he said.

In a time where major snack food companies are consolidating and mass producing, Reed said operating a company like Mister Bee is rare.

The chips are local, made fresh from a smaller operation, and likely haven’t been on the shelf long at the time a customer purchases them.

“We’re a little different. The potato was fresh out of the ground a week ago,” he said. “There’s not many people left like us.”

Mister Bee dates back to 1951, when Leo and Sara Klein opened the potato chip company’s first office on Mary Street in Parkersburg.

The company moved to its current location in 1962 and has remained largely the same ever since.

Leo Klein operated the business until he passed away at the age of 73 in 1979. The Klein family continued to operate Mister Bee until 2010.

While none of the investors had experience in the food industry, Reed said they all have dedicated themselves to helping a West Virginia staple, rooted in the state’s history, succeed.

“Everybody has a big interest in seeing it succeed,” he said. “Everybody grew up eating the chips, so everyone wants to have a part in making them better.”

In addition to new partnerships with customers and retailers, Reed said the team has plans to redesign the bag to give it a more modern look. The company has also made an effort to give back to the local community.

As a millennial himself, he said he hopes to better target a younger generation than Mister Bee has before.

The factory previously hosted school groups for tours — something Reed said he hopes to start again.

As for the well-known “Mister Bee” logo, Reed said he’s heard several stories about the origin of the black-and-white bee tipping a top hat, but nothing for certain.

“I really think it was just something that the family dreamed up,” he said. “It really sticks out. It’s hard to forget. I like it. There’s definitely nothing I want to change.”

The company is also working toward making investments in equipment and has plans to eventually expand its offerings to other snack foods — not just chips.

“We’re growing,” he said. “It’s been a lot of years since this place could say that.”

Since becoming president, Reed said he’s finding more and more people who are passionate about Mister Bee, who have childhood memories of the snack.

“It’s something that relates them to home,” Reed said. “We get online orders every day. You can tell where a lot of West Virginians have ended up. It gives people a sense of home.”

“We turned off international shipping,” he said, laughing. “These people, I tell you, when they come home — they stock up.”

Reed said he sees a people with a strong sense of pride in Mister Bee chips, similar to the pride he and other West Virginians take in their home state.

“I think a lot of people, they want to support something local. West Virginia is a very prideful state. There’s not a lot of things we can grasp a hold of. We have our football team, we have our potato chips — there’s not a whole lot coming out of here,” he said.

“A lot of the things around here are resource-based with energy. You don’t really pull up to a gas station and say, ‘I bought this gas that was drilled in West Virginia.’ But it’s really prideful when you buy a bag of chips and it was made here.”

For more information on Mister Bee chips, including a complete list of retailers, visit misterbee.com.