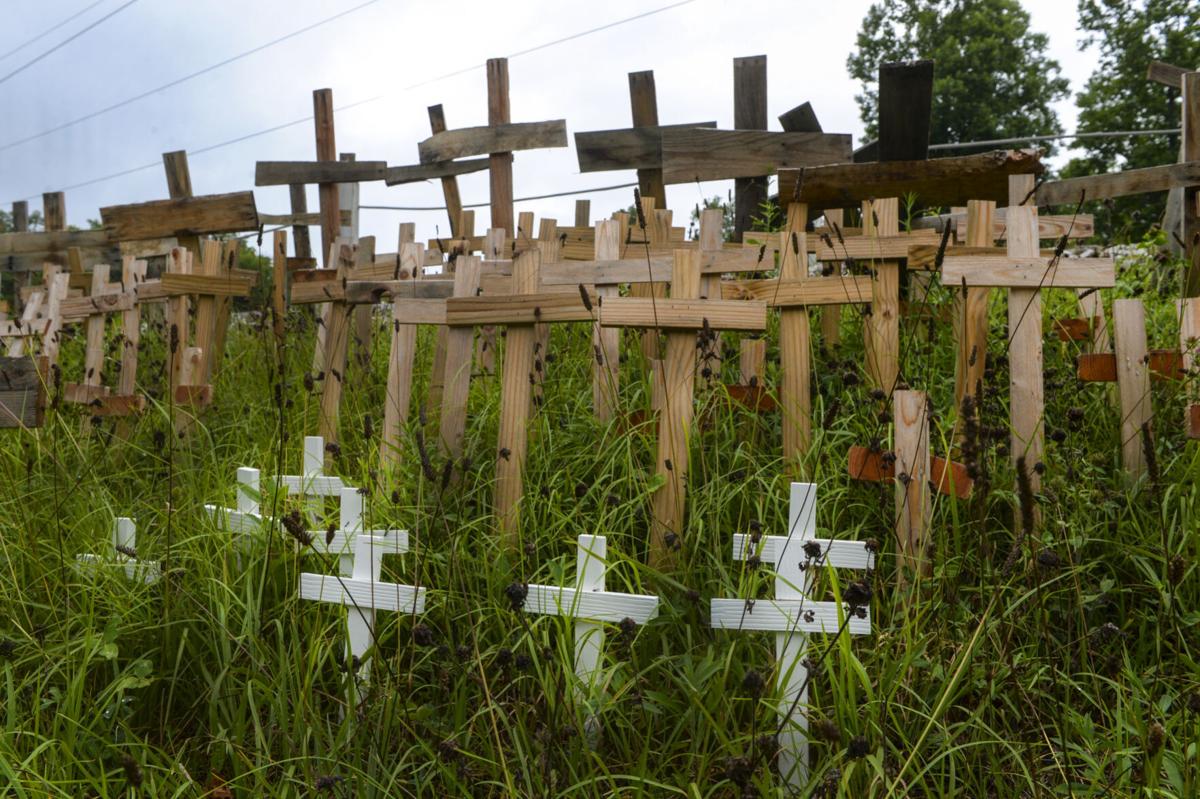 Heritage Baptist Church in Pinch planted crosses they made representing the 952 West Virginians who died from overdoses in 2018 (the number they had when they began the project). The crosses represent a larger project about hope for addicts and their families. 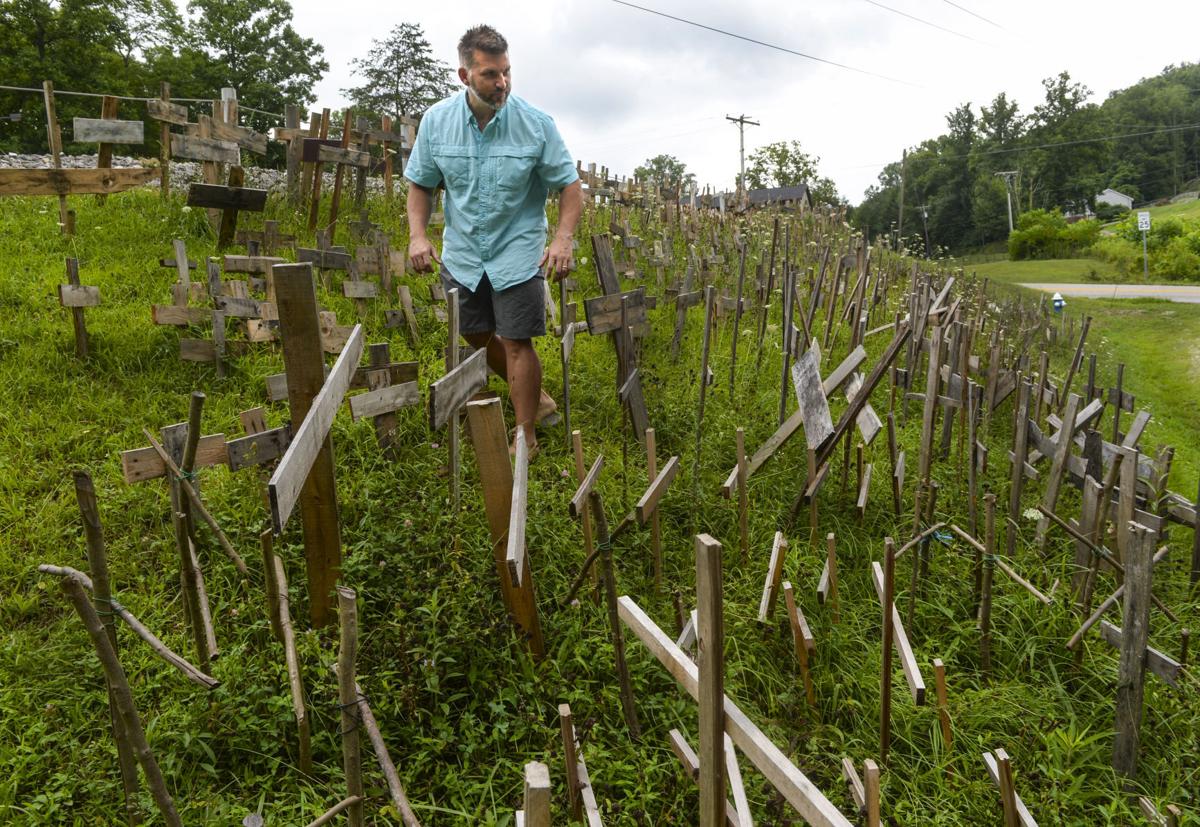 Heritage Baptist Church Senior Pastor Luke Adkins walks among crosses the church congregation made representing people who have died from opioid addiction. The crosses are part of a larger plan to help people with needs find help. 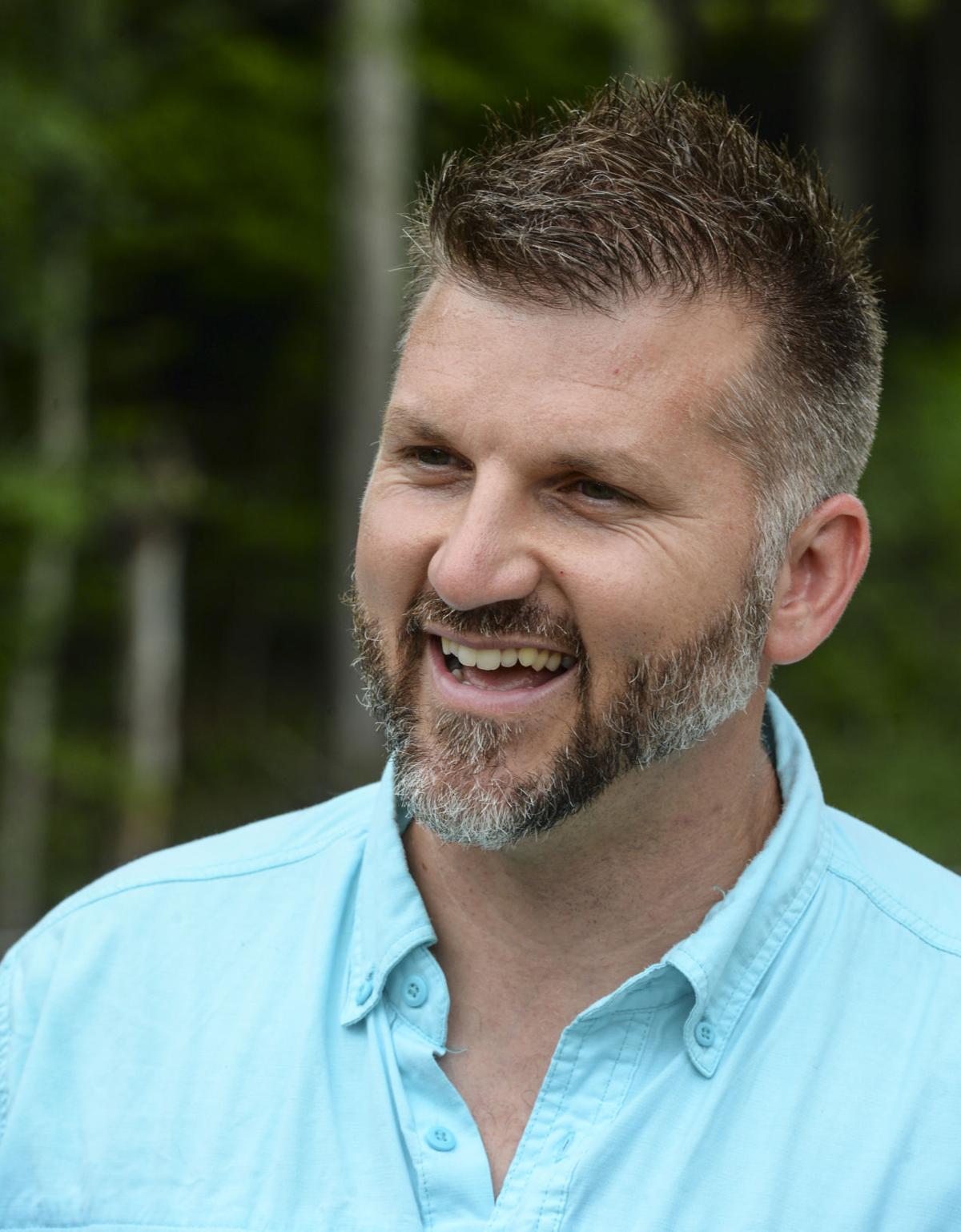 Heritage Baptist Church in Pinch planted crosses they made representing the 952 West Virginians who died from overdoses in 2018 (the number they had when they began the project). The crosses represent a larger project about hope for addicts and their families.

Heritage Baptist Church Senior Pastor Luke Adkins walks among crosses the church congregation made representing people who have died from opioid addiction. The crosses are part of a larger plan to help people with needs find help.

From the side of the road, the image is arresting — a steep hill covered in a thick blanket of small, wooden crosses.

The display is just down from Heritage Baptist Church in Pinch.

Hundreds of the crosses poke out of the ground, like rough-hewn flowers in different shapes and sizes. Some are just ragged boards nailed together into a “t.” Others are assembled more neatly. Others are just sticks tied together with string.

The display has been up on the hill for months, long enough for some of the crosses to fall or get knocked over.

Pastor Luke Adkins said he wanted them to stay that way and that nobody was supposed to cut the weeds poking up between the markers.

With daily reports of lives lost, the tendency would be to assume that the display has something to do with the COVID-19 pandemic, but there aren’t 150,000 crosses on the side of the hill (the approximate number of Americans who have so far lost their lives to the coronavirus), and there are far more than 110 (roughly the number of West Virginians who have died).

Adkins said people stop to ask about the crosses and what it means.

“We tell them the coronavirus is tough. It’s rough, but this for something that’s been going on longer,” he said.

The crosses on the hill represent 952 lives lost — the number of counted overdose deaths from 2018.

“That was from the year we had numbers,” Adkins said.

The crosses are more than a number to him. They’re families torn apart, the loss of life and innocence, as well as the incalculable damage to the local community and beyond.

The crosses illustrate the loss, but it’s not the entire message the church wants to share. It’s just the one that can get through the current worries about the virus.

Aside from his job at the church, Adkins has been a fireman with the St. Albans Fire Department for about a decade. For years, he’s been running calls about drug overdoses.

“You can listen to the scanner and hear when a new shipment of drugs has hit the streets,” he said.

Over the radio, it can sound like the overdoses are going from house to house in a neighborhood.

Adkins talked about things he’d seen on the job, things people he’d worked with had seen and how it seemed next to impossible when someone survives an overdose. The mix of heroin and fentanyl works quickly and most people aren’t using in public places.

“It just kills you so fast,” he said. “It’s amazing that so many people are found in time, that there’s someone to come revive them. The window is so short.”

It was more than amazing, Adkins said.

Seeing the effects of the drug epidemic hasn’t been limited to just his day job at the fire department. He’s known people who’ve lost children, parents, brothers, sisters and friends to drugs.

There are grandparents raising their grandchildren.

Adkins talked about a woman in his church whose daughter was in recovery and getting her life back together, a married couple who’d both struggled with addiction, but had come through it and through faith had saved their marriage.

There were more stories and some of the ways people find their way out of addiction was getting missed.

Adkins said he and his church began discussing, “How can we bring some hope to some people?”

Heritage Baptist planned an event. It was going to feature worship music, food from Rollin Smoke BBQ, just up the road in Big Chimney, and several speakers who could speak about how it was possible to come through the other side of addiction.

“They could show that they were proof, that there was hope, that it could be done,” Adkins said.

Inside the church’s community room, booths from different recovery organizations, including Spartan House and Rea of Hope, would be set up. Government agencies would also have booths to help people find help and locate services.

From his work at the fire department, Adkins said he’d learned that one of the obstacles to getting help was sometimes people not knowing what help was available or what they had to do to get it.

The church’s event would link help with the people who needed it.

“Even if you couldn’t get someone who was using through the door of the church, you could come out of the church with some knowledge, so that when that person you cared about started talking about getting clean, when they had their moment and wanted to pull the trigger, you’d know what you had to do next,” Adkins said.

The church wanted to give a great gift to their community, but then came COVID-19. The pandemic shut businesses down. There were bans on crowds. Churches stopped meeting in person and Heritage Baptist’s plans ground to a halt — almost.

They decided to go ahead and make a statement about what was going on in the community.

Using the numbers they had available at the time, the members of the church took up the project, began making crosses at home and then dropping them off at the church.

It took a couple of work nights to get the crosses planted.

“By the time we were finished with the 952, what we had was a pretty incredible visual,” Adkins said. “We could show just how devastating this was.”

While it wasn’t everything they wanted, the church did a live music night and had a couple of speakers come in from Spartan House.

“They just told their stories about what God can do,” the pastor said.

Adkins said people stop to ask about the crosses often. At the very least, it’s an explanation and a conversation, but Adkins said they had higher hopes.

“We want to think of this as phase one,” he said. “We want to work on this in phases and get back to what we were planning on doing — putting people with needs with people who have resources who can help.”

Letting people find some hope and hear it out of the mouths of others who are a testimony to that.

“You have to have hope,” he said. “When people believe they’re beyond hope, beyond redemption, you start to see some crazy things happen.”