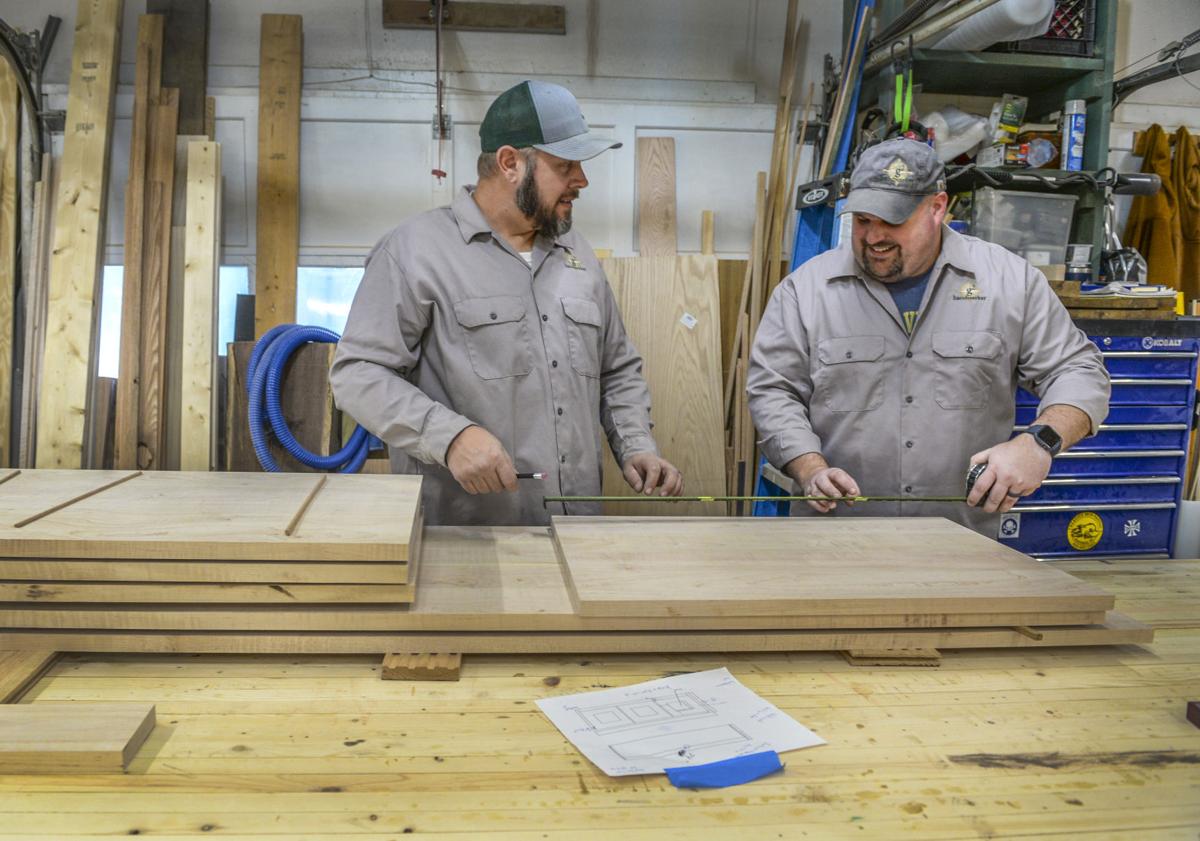 Doug Gerwig (left) and Bobby Gunnoe work on a custom credenza for a client in New York. By the time it’s finished, they expect to have put in roughly 300 hours of work. 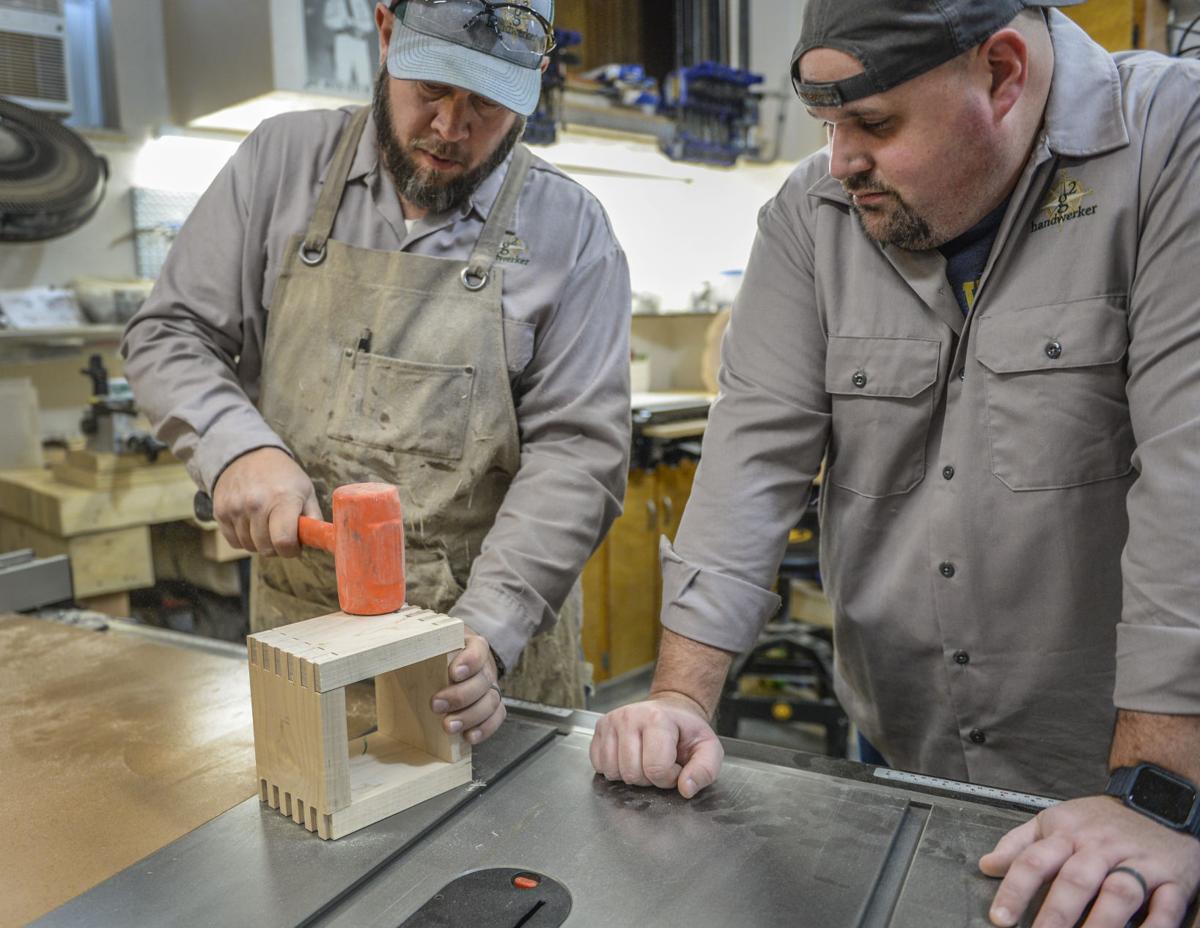 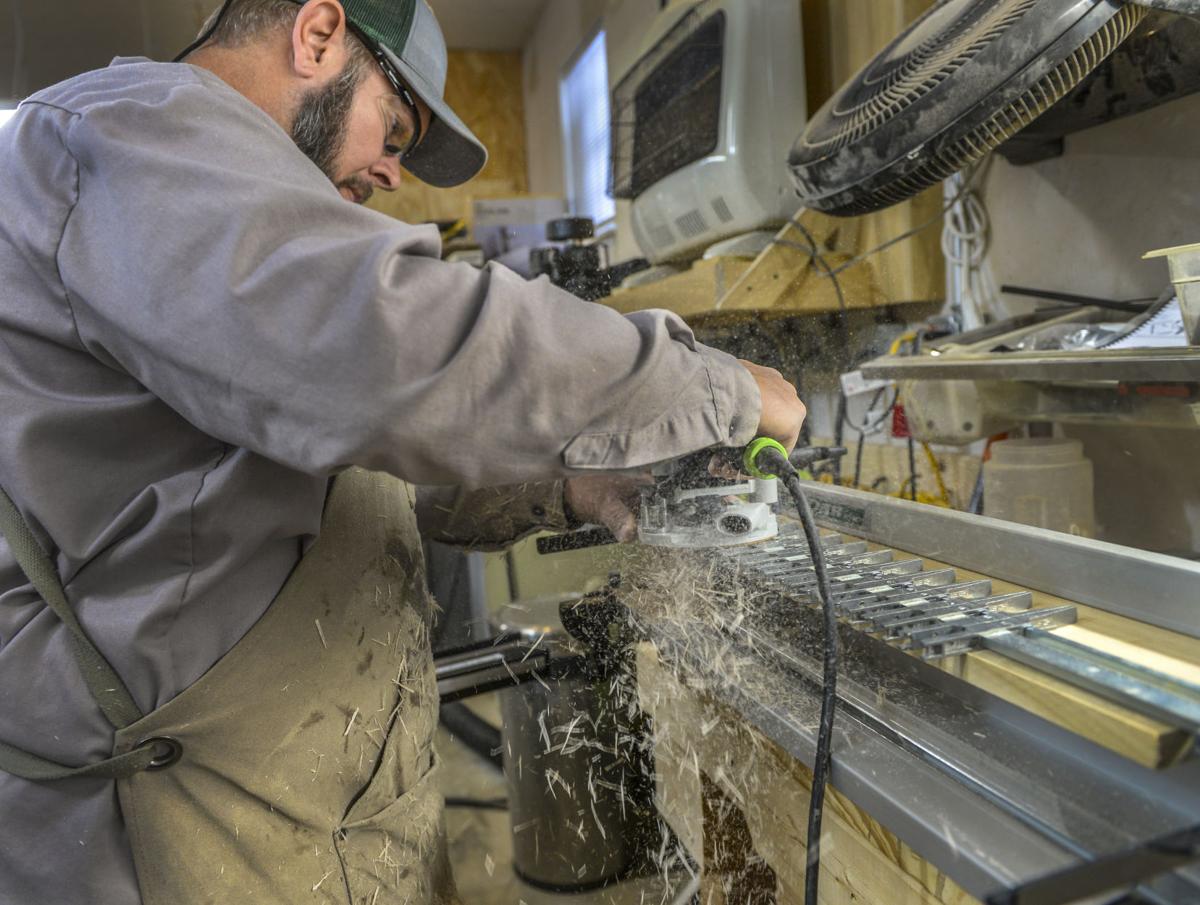 Doug Gerwig cutting with a jig. 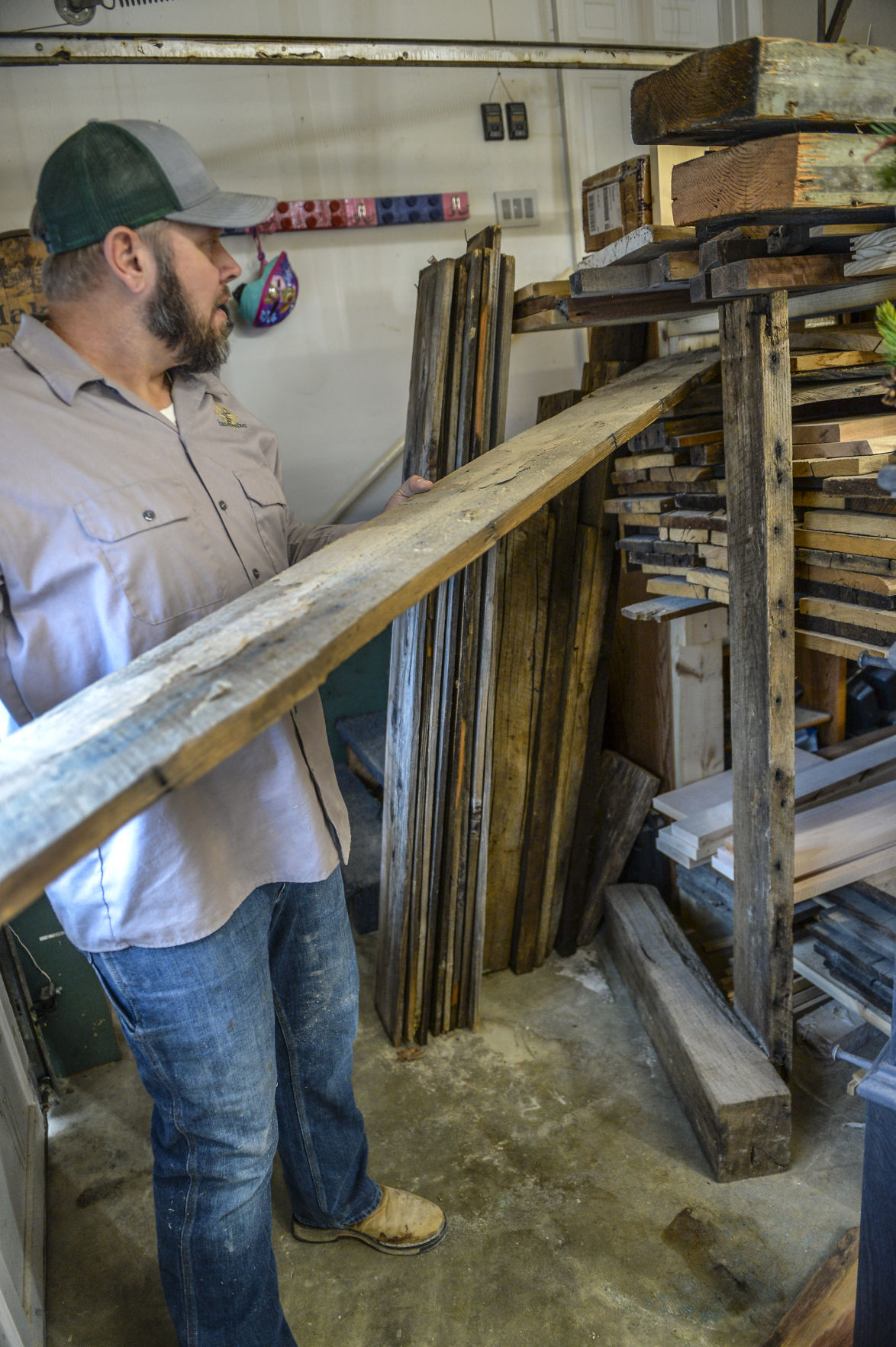 In the G2 Handwerker Designs shop, many of the old, raw wood pieces have their own story to tell. 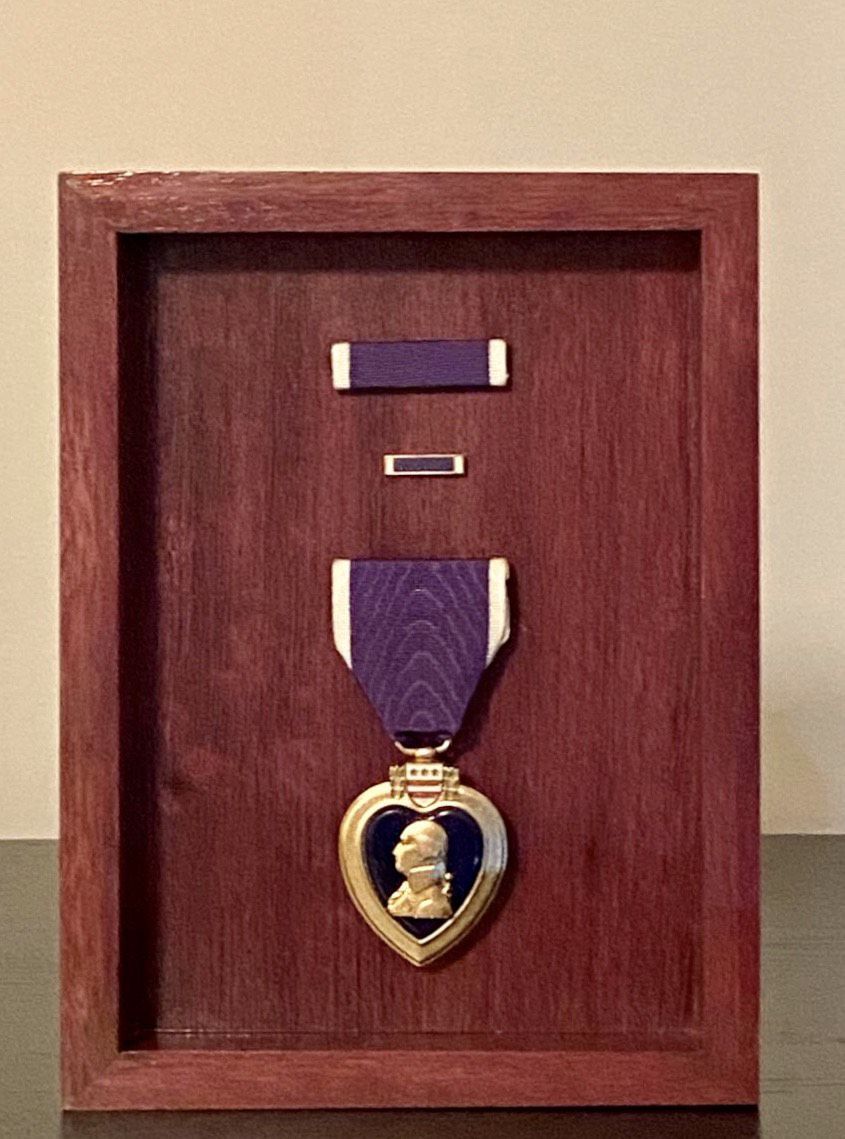 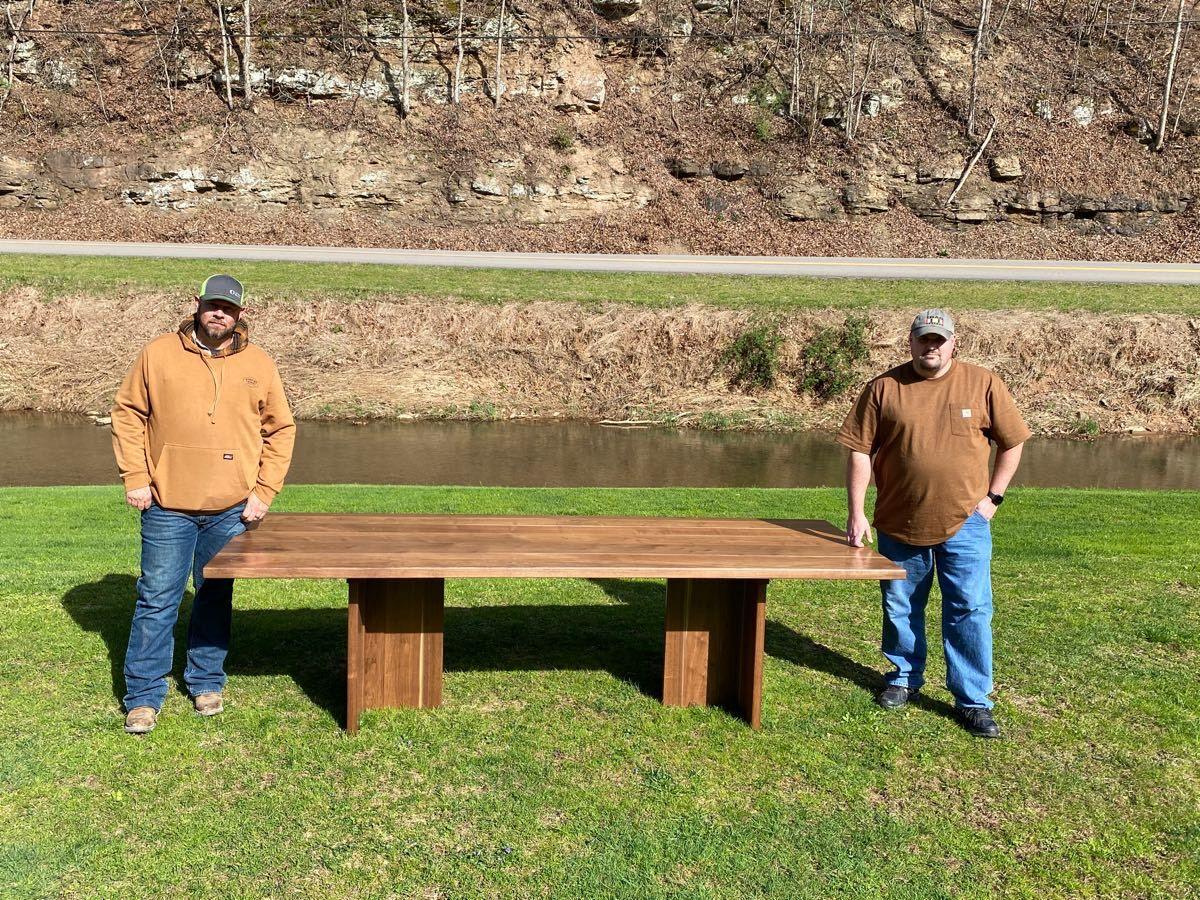 Doug Gerwig (left) and Bobby Gunnoe with their black walnut table before they loaded it up and drove it themselves to Las Vegas for its network television debut. 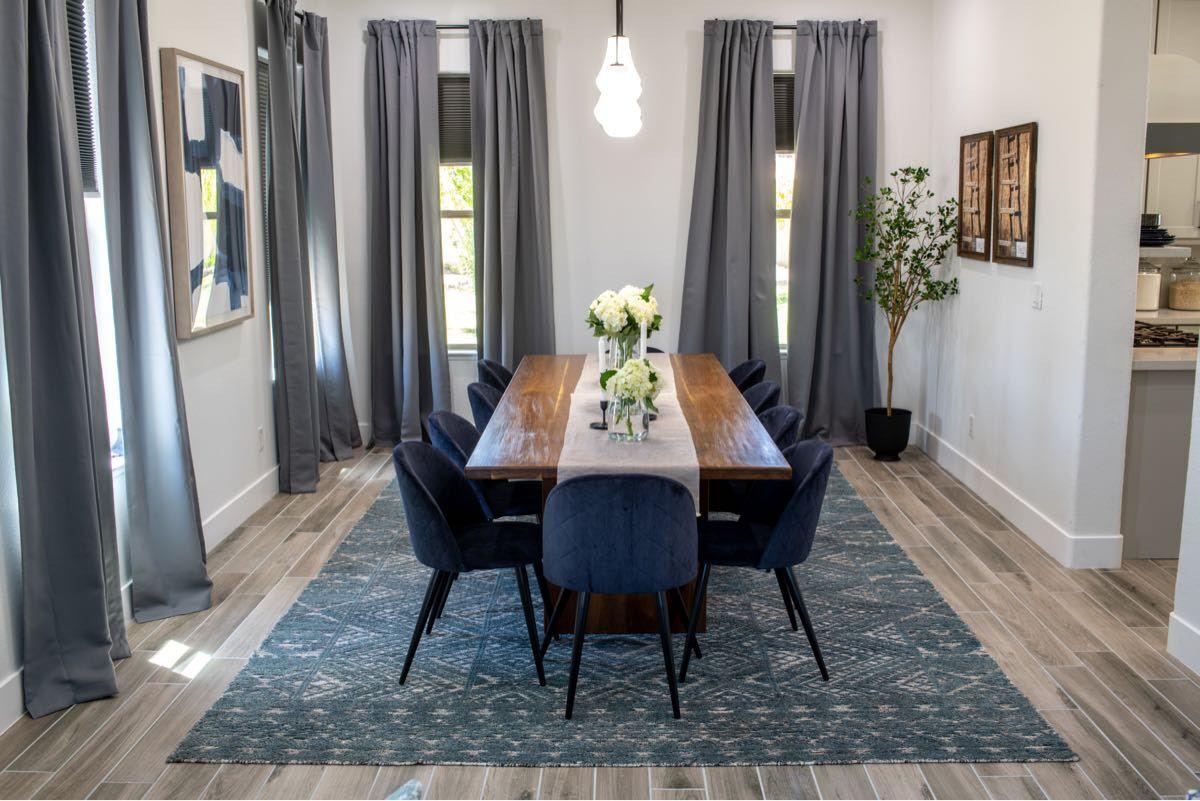 A black walnut dining table made by G2 Handwerker Designs was featured on the Dec. 2 segment of the “Property Brothers: Forever Home” series.

Doug Gerwig (left) and Bobby Gunnoe work on a custom credenza for a client in New York. By the time it’s finished, they expect to have put in roughly 300 hours of work.

Doug Gerwig cutting with a jig.

In the G2 Handwerker Designs shop, many of the old, raw wood pieces have their own story to tell.

Doug Gerwig (left) and Bobby Gunnoe with their black walnut table before they loaded it up and drove it themselves to Las Vegas for its network television debut.

A black walnut dining table made by G2 Handwerker Designs was featured on the Dec. 2 segment of the “Property Brothers: Forever Home” series.

SUMMERSVILLE — When you shoot for the moon, sometimes you actually get there.

Which is exactly what — eventually — happened for a couple of buddies who started a side business a little over a year ago and wanted to get their company name out.

“To me, it’s like, ‘Alright, how can I get on national television?’ ... I even wrote an email to the Food Network, to Bobby Flay. ... I was willing to make them a cutting board and send it, you know, just so they could have something they can talk about,” said Doug Gerwig, a commercial contractor by day.

Never mind that he and Bobby Gunnoe had only been in business for a few months, that they only met because their children were friends or that their custom furniture company, G2 Handwerker Designs, was a part-time gig that came in addition to their demanding day jobs.

They reached out to HGTV and the popular “Property Brothers” shows starring real estate and renovation experts Drew and Jonathan Scott who, as the network says, “transform ordinary houses into lasting family dream homes” before millions of viewers.

“I was specifically pitching directly to the ‘Forever Home’ series because what better way to kind of immortalize your name in something is to make something for someone’s forever home, that that’s their dream home. That’s what they’re going to live in forever,” Gerwig said.

This time, show producers did respond — quickly. It took a while to get final network approval, but it did come. And what’s happened since then has been “hard to believe,” Gunnoe said.

The thing is, most people look at a table and see a table.

Gerwig and Gunnoe look at a chunk of wood and see a work of art in the making. A piece of history. A tribute to ancestors they never knew, but to whom they feel connected.

And so this is a story about heritage. About sacrifice. About history ... and two men who bring all of those things together in a way that’s both functional and beautiful.

Gerwig has been working with wood all of his adult life.

“There were three brothers that came over here from Germany in the late 1700s. ... One settled in New York, one settled in this area and the other one kind of went further west. But if you go back and look at each group of them, this is kind of what they did, making furniture,” he said.

On his dad’s side, though.

“My mom’s side were actually a bunch of outlaws,” he added with a grin. He’s proud of that, too — but especially proud of the woodcraft traditions.

“I mean, I look back at stuff that my great, great, great granddad made. ... My dad has a chest that he made that has so much intricate detail and lays in it. And you look at it and you’re like, ‘Alright, I know what I have to work with today.’ I mean, we have, you know, the nice table saws, the portable CNCs, the joiners, the planers and stuff like that. And you’re like, alright, they used hand planes on this stuff.”

He looks at a credenza they’re working on, a piece that will probably take close to 300 hours of work before it’s finished, even with all that fancy equipment.

“I mean, can you imagine ... think how many hours it would’ve taken to make something like this.”

He owns a commercial contracting firm, but has made custom furniture on the side and felt a pull to return to those roots.

“My vision for it is that each and every piece that leaves this shop, I strive for it to be something that you could go to a museum and see on display in 200 years. I want it to be that type of quality and that detail on it to where, you know, they’re like, ‘How in the world could they do that?’”

So when he came across a piece of purple heart wood — known for its deep eggplant shade — he thought of making a shadow box for his friend Gunnoe, who had earned it the hard way.

“The detail was amazing,” Gunnoe said. “That’s a very, very hard wood. Like ... it’ll burn up drill bits and saw blades like nothing, really. So the intricacy work is amazing.”

It was the perfect place to display his own Purple Heart.

“I was airborne infantry. I was a paratrooper” with the 82nd Airborne Division, he said.

“It’s all I ever wanted to do as a kid growing up,” he added.

That was maybe because of his own ancestors. Gunnoe said his grandfather was a paratrooper in the 101st Airborne Division and his uncle was a Korean War veteran, who was also in the airborne infantry.

About eight months in, “I got hit by an [improvised explosive device]. Lost half my calf on my left leg.”

He turned down a military desk job — “I couldn’t be airborne anymore, couldn’t be infantry, so I wasn’t going to do it” — and then found it almost impossible to land a job, any job, when he came back home.

“I applied to almost 60 jobs before I found one, paying medical claims,” he said.

It was a far cry from the heady, urgent rush of war.

Eventually he became a registered nurse and today is a nursing supervisor for Summersville Regional Medical Center.

He likes the work.

He also liked what he saw looking at the shadow box. There are no nails and no screws. Just box joints cut with such precision, fitted together so snugly, that it’s unlikely to ever come apart. It was made with the kind of discipline and attention to detail he’d found in the Army.

“We were talking one day, you know. It was like, ‘I appreciate the intricacy of that.’ We started comparing some notes and said, ‘Why don’t we just start doing this?’”

So these two men have their own unique histories. And so does the wood they work with.

“You see that piece right there? It’s from Harewood Mine in Fayette County. ... A piece of Brazilian teak,” Gunnoe said, pointing to a rectangular slat of wood with five holes in it, slightly off center.

“My wife’s grandfather died in that mine,” he said. “I’m making that for my father-in-law, because he’s the only person alive that I know that worked at Harewood Mine.”

“You see that beam up there, that kind of ugly beam that’s cut in half? That’s Douglas Fir from a magnesium mine in Nevada that was used in World War II.”

He gestures around the old garage that may never be a garage again — a cement work space now crowded floor to ceiling with pieces of wood that have endured something.

“We have redwood over here from a winery in Napa Valley that burned down last year. And that right here is red oak that’s local. They were all cut up over a hundred years ago.”

“You can just feel it. There’s a warmth about the wood whenever you work with something like that,” Gerwig said.

“Like that black walnut slab over there. ... We’ve got it, and we want to do something with it. But it hasn’t ever just looked at me to be like, ‘Hey, this is what I want to be.’ We’re just waiting for the right thing to do, the right thing to come along.”

Plenty of things have come along, though.

Already two of the projects by Gerwig and Gunnoe have been featured on “Property Brothers: Forever Home,” including a black walnut dining table shown on the Dec. 2 show, segment 406, titled “Honoring Lola.”

“And in that section of the show, there was like 15 or 16 still shots of that table before they ever showed it to the homeowners,” Gerwig said.

“And then when they showed it to the homeowners, you know, for us just standing there seeing their reaction. ... They were like, ‘Holy cow. Look at this table.’”

He paused and shook his head.

“That thing was in the shop a few months ago. We made that and there it is. And there’s millions upon millions of people seeing it right now,” he said. “It’s kind of one of those moments.”

Not wanting to take any chances, they personally drove the final products to Las Vegas for the show. They also appear in the credits of the show, which were accessible enough that orders have been coming in, including from several well-known designers and customers across the country.

The next episode they created a piece for is tentatively scheduled for Feb. 10.

“And we’ve got some more things coming. We’re working with some designers in Las Vegas, people from D.C. have contacted us,” Gunnoe said. “It’s been blessing over blessing.”

Not bad for a couple of guys and a part-time gig.