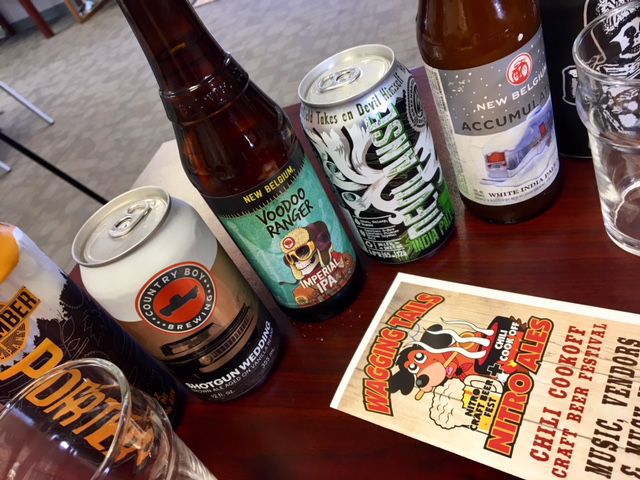 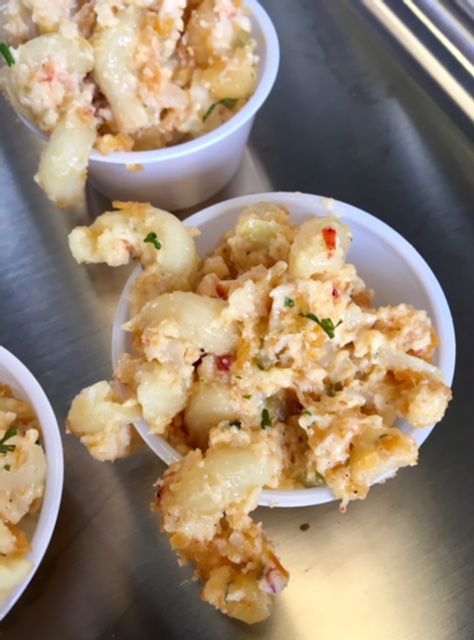 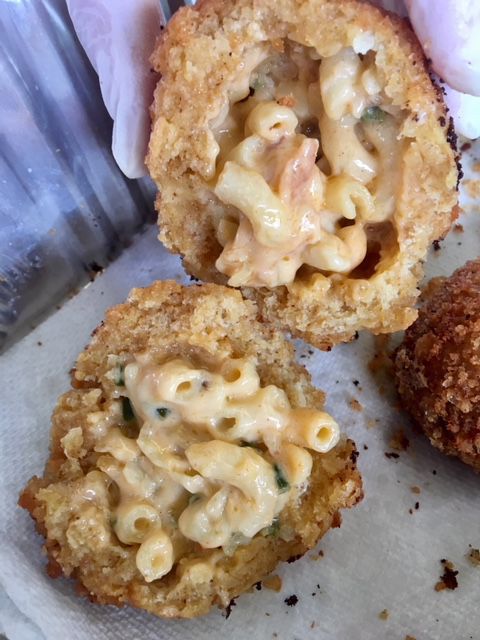 Remember last week when I offered a sneak peek at three fun food events coming up this weekend?

This Saturday’s fourth-annual Wagging Tails Chili Challenge introduces two changes — a new location and a new event teaming up with it.

While chili contestants whip up piping hot pots of traditional red, white chicken, green or vegetarian chili, nine breweries at the inaugural Nitro Ales Craft Beer Festival now paired with it will serve up frothy samples of 16 different craft beers (more on those in a minute).

As for the chili, public voting will crown a People’s Choice winner, while blind judging will determine which contestant goes on to represent Wagging Tails at the International Chili Society’s World Championship Chili Cookoff next year.

Chili and beer is already a match made in heaven, but all proceeds going to Dog Bless — a local volunteer animal rescue group that has fostered, transported, provided medical care and found new homes for more than 3,000 dogs since 2012 — makes this Saturday’s festival all the more rewarding.

“We like to say you can come eat some chili, drink some beer and save a dog’s life,” said event volunteer Jim Lefew.

What’s not to love about that?

Both dog-friendly, rain-or-shine events will take place from noon to 4 p.m. Saturday at Living Memorial Park on the corner of Second Avenue and 21st Street in Nitro.

In addition to chili and beer, local food trucks Island Teriyaki, Jonesy’s and Old School Concessions will offer a variety of items like barbecue, hot dogs, corn dogs, funnel cakes, hamburgers and fish tacos. There also will be music from the Charleston band Hurl Brickbat and a children’s area with inflatables.

Chili sampling tickets are 50 cents each and general admission to the Nitro Ales Brew Festival is $10, which includes entry and two craft brews. Additional beers will cost $2 each. VIP packages for $25 also include a T-shirt and limited edition collector’s cup.

For more information about the Nitro Ales Craft Beer Festival, contact Tim Arnott at 304-545-5845 or Donna Boggs at 304-549-8823. Tickets can be purchased in advance online at nitroales.com.

To help promote this year’s new Nitro Ales Craft Brew Festival, organizers invited me down for a pre-event sampling of several of the beers they’ll be pouring. (Love these guys already!)I had a great time sipping beers and talking to New Belgium Brewing Company’s Ron Stenger and Nitro Ales coordinator Tracy Toler not only about the flavor nuances of each brew I sampled, but also about the state of the craft brew industry in general.On that front, we all celebrated the fact that craft beer has become so much more popular and available in recent years, but also shared concerns about the market becoming over-saturated.

There are new breweries popping up all the time — not all of them good, and many taking the whole experimental brewing thing a little too far. (I’m not sure we really need more watermelon ales or chocolate-banana-peanut-butter lagers, an actual beer that is actually the worst thing I’ve ever put in my mouth.)

The cream usually rises to the top, though, so cheers to even more top-notch choices in the months and years ahead. In the more immediate future, here are a few top-notch brews you can sample this Saturday in Nitro:

New Belgium’s unusual Accumulation White IPA (so called because wheat is added to the malt to create a yeasty, citrusy mouthfeel) is an approachable option for those who might not care for a heavier true-wheat beer.

While New Belgium’s Voodoo Ranger Imperial IPA weighs in at a hefty 9 percent alcohol, and offers all of the fresh-cut pine and citrus you’d expect from this style, it’s not as “heavy” (read: thick, sweet and syrupy) as most imperials tend to be.

As the only independent brewer in Saturday’s lineup, Blackwater Brewing from Canaan Valley will offer its kolsch, which is a cross between a crisp ale and a creamy lager.

One of the most unique offerings on tap will be a crab apple saison by Country Boy Brewing that gives a nod to a favorite regional, seasonal flavor. A saison is a lower-alcohol farmhouse ale, and this particular brew (made with locally sourced crab apples) drinks almost like a cross between a cider and a sour beer.

Also on the list is Big Timber’s Wet Hop, which Stenger says he believes is the only beer made in West Virginia that uses all West Virginia-grown hops.

“The hops used in this one have not been dried or pelletized, as they are in most beers, so it’s as natural a brewing process as you can get.”

“We tried to put together a selection of beers featuring different styles that would appeal to lots of different tastes, while also including some seasonal and draft-only options that you just can’t run out to the store and buy,” Toler said. “So why not come out and try them at very community-drive, kid-friendly and dog-friendly festival this weekend?”

I also had a great time this past Saturday down at Capitol Market, where I nearly ate my weight in warm, gooey goodness as a judge at this year’s fourth-annual Charleston Mac & Cheese Cook-off.After sampling all 15 pastas contending for this year’s title, I then had to go back for second helpings of five of them to break a five-way tie for third-place on my scoresheet.That’s 20 little cups of mac and cheese I downed that day, a feat I was proud of at the time but bloatingly second-guessing about an hour later.

I’d do it again in a second, though. The quality of this year’s entries was first-rate, with only one mac and cheese that was a true letdown. I won’t embarrass that party here, but let’s just say it came from an establishment that should know (and do) much better.

As for the day’s big winners, the choice was clear.

Paterno’s killed it with a rich, creamy, decadent mac and cheese made with a blend of muenster, sharp and goat cheeses flecked with slow-roasted tomatoes that won both the judges’ and peoples’ choice awards. It was the kind of soul-satisfying comfort food you dream of — and I could’ve eaten it all day.

Right behind that one was the Asher Agency’s very-close-second Lobster Bisque Mac ‘n’ Cheese, a delicious interpretation with sherry, saffron, parsley and butter that tasted just like a creamy bowl of lobster bisque. It was so good, and unique, that I debated giving it my top score. But the Paterno’s offering was a tour de force that could not be denied this year’s crown.

As for the most unique entry of the day, West Virginia Eye Consultants served up a show-stopping fried mac and cheese ball that raised lots of eyebrows. Racquetball-sized orbs of five-cheese macaroni with bacon and jalapenos were coated in a panko, potato chip and brown sugar crust, then served atop a pool of lime cilantro crema.

It was absolutely stunning, but with so much going on ingredient-wise I was surprised it didn’t have more flavor. Otherwise, it would have been in my top three, no doubt.

Finally, the coolest part of Saturday’s cook-off for me was this:

While I went about my judging, I bought my three boys a basket full of tasting tickets so they could go around and sample everything themselves. Afterward, I asked them each to rank their top three choices — just to see what my little food-dudes-in-training thought of the same food I had tasted.

All three separately chose the same three favorites I had selected. And in the same order.

Finally, if you still want to catch any of the events I talked about last week, it’s not too late!For reservations or more information on Stonewall Resort’s moonshine tasting dinner Friday night, call 888-278-8150 or visit

To purchase tickets or obtain more information on the “Guys Night Out” tailgate party and wings contest on Saturday, visit GuysNightOutCharleston.com.

And for more information or to purchase tickets for the “Foodie Feast” Thanksgiving brunch at Paterno’s this Sunday, visit ywcacharleston.org/foodiefeast.

Steven Keith writes a weekly food column for the Charleston Gazette-Mail and an occasional blog at blogs.wvgazettemail.com/foodguy. He can be reached at 304-380-6096 or at wvfoodguy@aol.com. You can also follow him on Facebook as WV Food Guy and on Twitter, Instagram and Pinterest as WVFoodGuy.