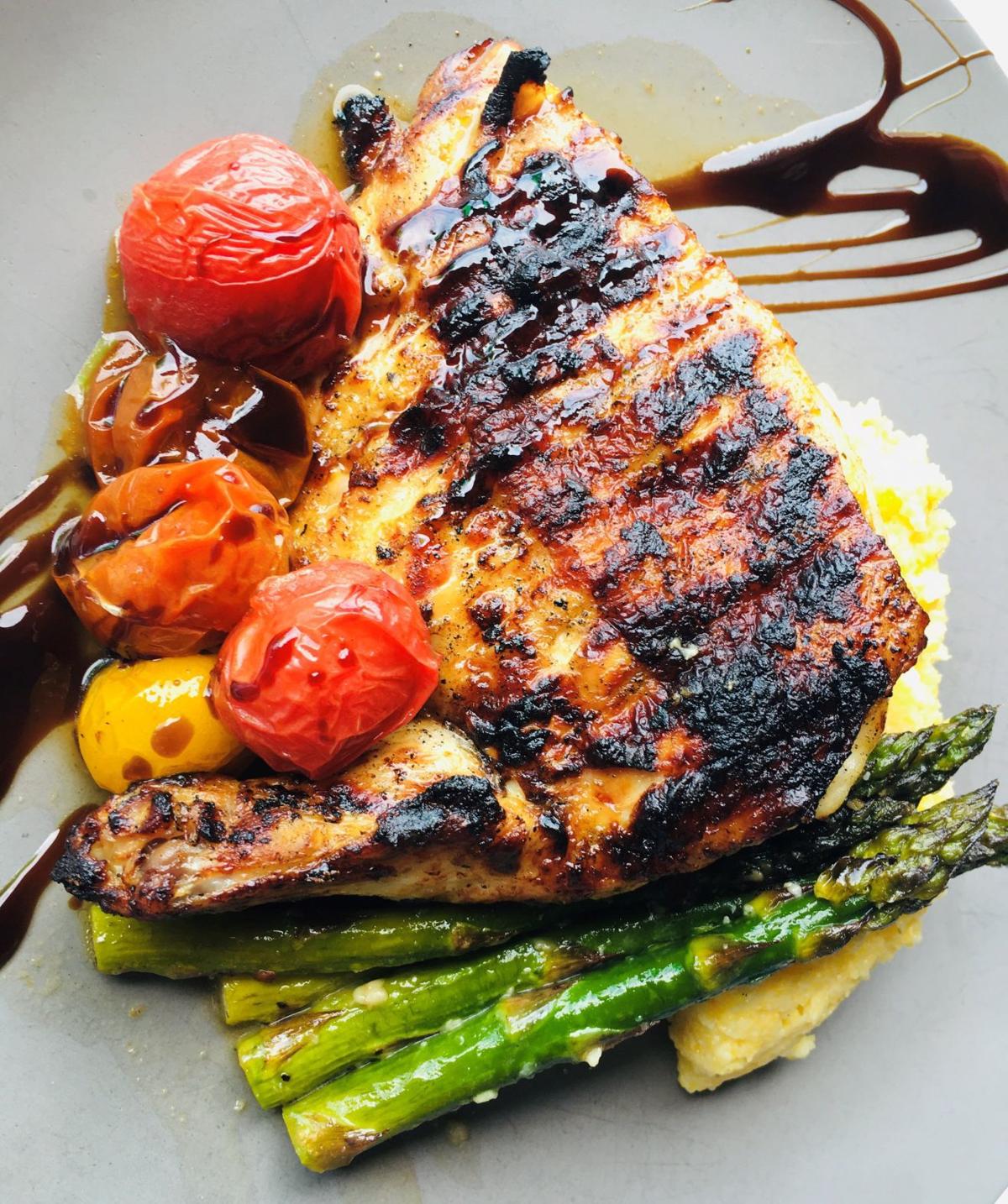 The balsamic-grilled airline chicken breast with blistered cherry tomatoes and market vegetables was surprisingly good because the balsamic was not drizzled over, but actually baked into the chicken, giving it a tangy, charred crust. 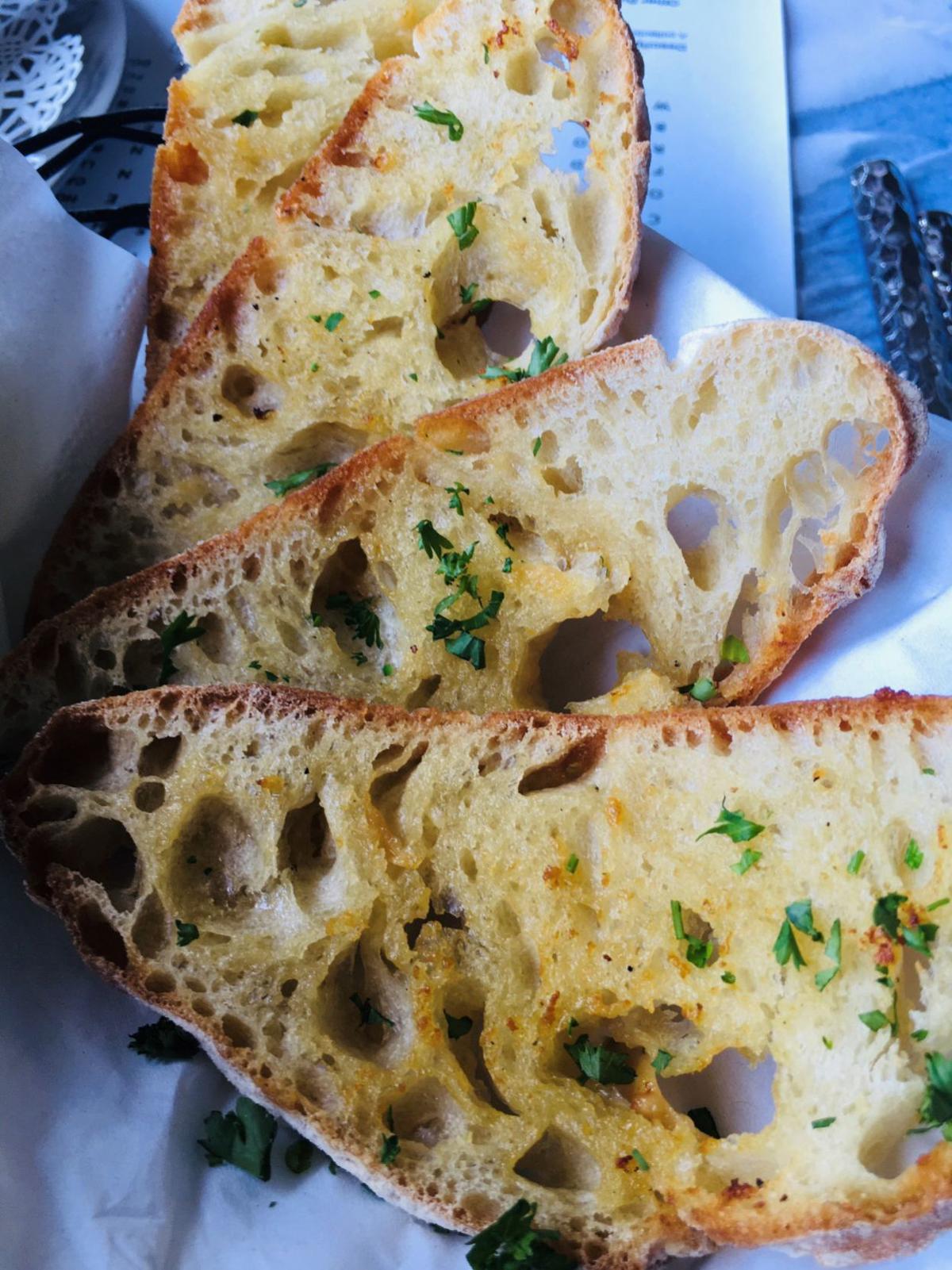 The roasted garlic ciabatta bread at Ristorante Abruzzi is made at Charleston Bread and second only to the garlic- and butter-soaked bread basket served at Fazio’s. 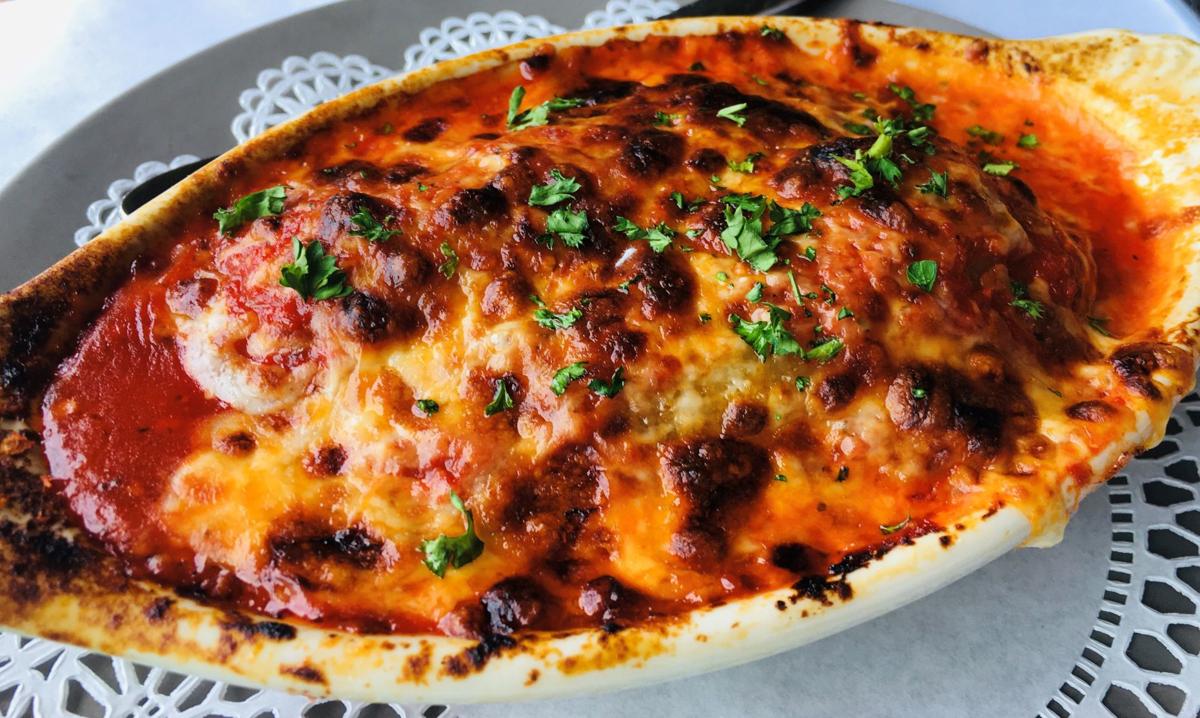 The stuffed peppers, made with Angelo’s Old World Sausage and topped with house-made tomato sauce and mozzarella, may be a bit spicy for some tastes.

The balsamic-grilled airline chicken breast with blistered cherry tomatoes and market vegetables was surprisingly good because the balsamic was not drizzled over, but actually baked into the chicken, giving it a tangy, charred crust.

The roasted garlic ciabatta bread at Ristorante Abruzzi is made at Charleston Bread and second only to the garlic- and butter-soaked bread basket served at Fazio’s.

The stuffed peppers, made with Angelo’s Old World Sausage and topped with house-made tomato sauce and mozzarella, may be a bit spicy for some tastes.

Last week’s love letter to Bricks & Barrels shared my admiration for a restaurant that may have initially stumbled out of the gate, but humbly tackled its flaws to now offers one of the finest dining experiences in the area.

This week’s shout-out goes to another nearby restaurant with just as much stick-to-itiveness. And that same dedication is starting to pay off.

Tucked alongside Appalachian Power Park on Charleston’s East End, Ristorante Abruzzi is another locally owned restaurant that has worked out the kinks and is definitely on the upswing, having recently celebrated its one-year anniversary, as they told me, “COVID and all.”

Not only that, but owners Mark and Libby Chatfield (the same masterminds behind beloved local bakery Charleston Bread) continue to face each challenge with a smile, whatever comes their way.

Having gone through a couple different chefs and menu changes — chef Brandon Estep has taken over the kitchen now — the Italian restaurant that replaced Paterno’s is consistently offering good food (soups, salads, sandwiches, pizzas, pasta and entrees) and service in surroundings I’ve always loved. (If you were a fan of Paterno’s, the ambiance and some of the top servers are still very much the same.)

After enjoying a couple of nice meals there earlier this year, I recently visited Ristorante Abruzzi for the first time since the pandemic struck. Not only was I pleased with the food and service, but I also got to dine with a friend and her 8-year-old son, who I discovered not only wants to shadow The Food Guy but is also seriously gunning for my job.

Calling himself “The Food Dude,” colorful Max Willits offered commentary on the plates we were served throughout the evening — not just to me, but also giving the staff a few pointers when they came to visit our table, as well.

I kid you not, Max’s parting words to the chef were, “I want you to think about the suggestions I gave you.” I laughed, nervously, because his observations were spot-on.

We both really enjoyed the flavor of the peppers stuffed with locally made Angelo’s Old World Sausage and topped with house-made tomato sauce and mozzarella, but he suggested it might be a bit spicy for some tastes. Smart observation, and a server who heard his assessment said she’d even caution guests who order it moving forward. (Full disclosure: I agree it was pretty spicy, but loved it, and I’m fairly heat-sensitive.)

Max also loved the roasted garlic ciabatta from Charleston Bread, which is second only to the garlic and butter-soaked bread basket you get at Fazio’s. The only fault of his herb-marinated salmon with fresh vegetables and risotto Milanese was that the risotto was not as creamy and unctuous as most people like.

My chopped salad with romaine, grilled onion, roasted corn, bacon, feta, avocado and caper dressing is a repeat favorite of mine, and the Veal Parmigiano coated in seasoned breadcrumbs and doused in tomato sauce and melty mozzarella stood out because the flavor and texture of the veal didn’t disappear in a pool of sauce and cheese.

Based on a hearty recommendation, we also tried the balsamic-grilled airline chicken breast with blistered cherry tomatoes and market vegetables, which was surprisingly good because the balsamic was not drizzled over, but actually deliciously baked into the chicken, giving it a tangy charred crust. The cheesy polenta served alongside it, however, was a little grainy and dry, making me sad that it was the first polenta my friend had ever tried. (No worries, she didn’t complain and promised to give it another shot.)

Other great dishes I’ve enjoyed here before include the decadent Chicken Zucca Bake with olives, roasted tomatoes, pasta and rich gorgonzola cream, plus an out-of-this-world smoked salmon pasta that only appears as an occasional special, but is so worth looking out for.

We capped off the meal with a nice slice of salted caramel cheesecake and a giant house-made scone topped with icing.

Service throughout the evening was great — it always is — and we all left saying we were definitely looking forward to coming back soon. That’s the mark of a good restaurant right there.

If you haven’t given Ristorante Abruzzi a try, you owe it to yourself to check it out. You can also dine indoors or out, for those who still feel more comfortable enjoying meals alfresco.

In other local restaurant news:

n The new 1010 Bridge restaurant taking over the old South Hills Market space on Bridge Road is hosting special VIP dinners this weekend in advance of next Tuesday’s anticipated grand opening. Yes, I scored a table. And yes, I’ll have the scoop for you here next Wednesday.

But I don’t believe this is because the quality of the state’s wine-centric restaurants has declined. Several restaurant owners have told me it’s just that fewer now apply for this award due to the extensive work involved in that process.

The Food Guy: Like a fine wine, Bricks & Barrels gets better with time

Relationships that start out on the shaky side can sometimes grow to become the strongest. That’s certainly the case around my ongoing love af…