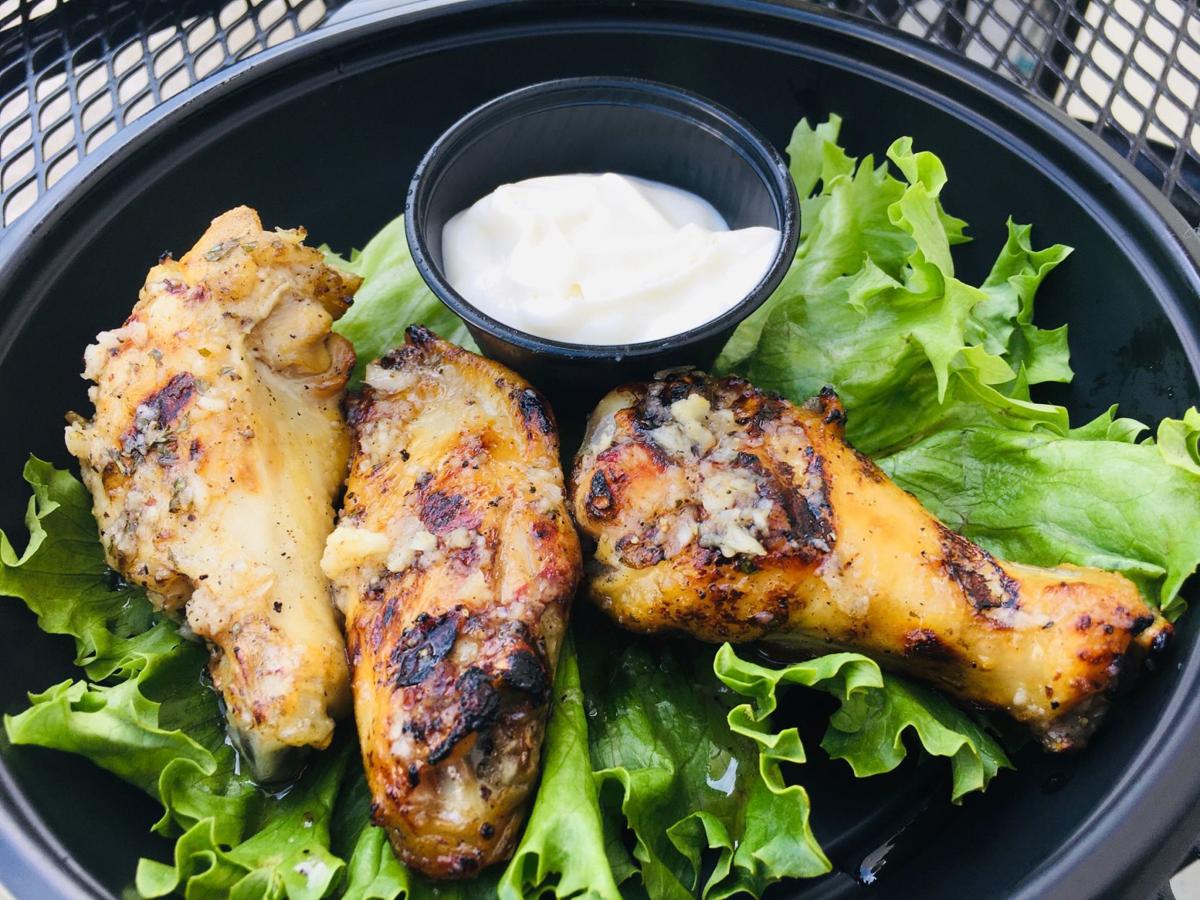 The Sultan Wings at Olive Tree Cafe, in South Charleston, are fire-roasted and tossed in cracked garlic with a lemon-olive oil-garlic aioli sauce. 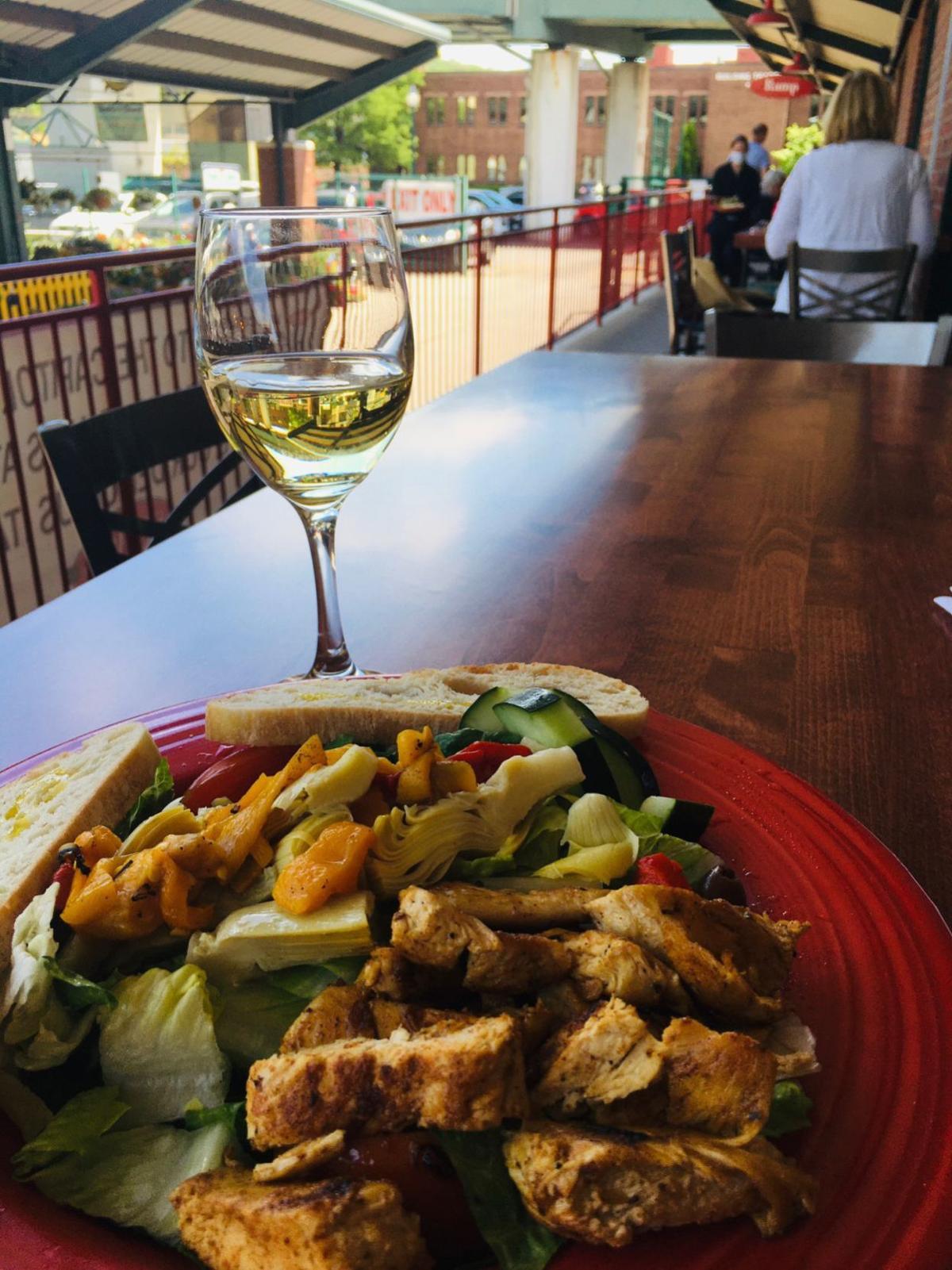 Soho’s resumed outdoor dining in its patio area on Monday.

The Sultan Wings at Olive Tree Cafe, in South Charleston, are fire-roasted and tossed in cracked garlic with a lemon-olive oil-garlic aioli sauce.

Soho’s resumed outdoor dining in its patio area on Monday.

I mean, only some of them (and it’s limited to outdoor dining at that) but I’ve actually enjoyed both lunch and dinner out this week at some place other than my house. That’s big news, y’all.

I stopped by the Olive Tree Cafe, in South Charleston, for dinner Monday to see how they (and customers) were navigating this new era, which was off to a not-unwelcome slow start.

“We’ve had a few folks come and go throughout the day,” chef/owner Michael Jarrouj said, as I sipped a glorious IPA from a foam cup on the restaurant’s large patio.

When it came time to order, I passed over my usual favorites (the shawarma, the Philly cheesesteak, the feta and olives) in favor of the new garlicky Sultan Wings, which are fire-roasted and tossed in cracked garlic with a lemon-olive oil-garlic aioli sauce that I now want to eat on every item at every meal. Maybe even brush my teeth with it.

Earlier that day, I popped by Soho’s for lunch, where all six outdoor tables were full and the outdoor market was absolutely abuzz with socially distanced crowds. The weather was gorgeous, all Soho’s employees were wearing masks, service was relatively quick (given it was the first day of reopening) and my lunch was fantastic.

It was hard not to get my usual favorite, the awesome Venetian Steak Salad, but I decided to try something I hadn’t before — a Chicken Artichoke Salad featuring blackened chicken breast, artichoke hearts, walnuts, roasted red peppers, tomatoes, cucumbers and kalamata olives atop Romaine with a house vinaigrette.

It was a delicious light lunch on a gorgeous day. A gorgeous day eating out AT a restaurant.

I’m not going to lie, folks, it felt liberating to be out safely eating and drinking again.

Additional restaurants opening their outdoor areas this week include The Block, The Lookout Bar & Grille at Eagle View and Hot Diggity Dog in North Charleston.

Others, however, aren’t jumping back into the fray as quickly.

Although they continue to offer carryout service, downtown’s Ichiban and East End restaurants Tricky Fish and Starlings Coffee & Provisions have no plans to reopen their outdoor dining areas just yet.

Black Sheep Burrito & Brews has been closed since March 24, something manager Kevin Madison said won’t change in the immediate future, even though the restaurant does have two outdoor seating areas.

“We have decided to take out time and do things right, tweaking up the menu and beefing up to-go options,” he said. “We are in no hurry at the moment because we could only have maybe two tables on the Quarrier Street side and possibly three on Summers Street, plus people possibly gathering to wait. It’s just an unnecessary hassle right now.”

Despite having the largest outdoor dining area in the city, Mi Cocina de Amor, on the West Side, also isn’t opening up to table service just yet, although guests can take their already purchased meals outside to enjoy it there. Owners Frank and Julia Gonzales said that was a tough decision, but one they stand by.

“Having the largest outdoor space in the city at Mi Cocina de Amor, it’s certainly a relief to be able to use it again. However, that being said, there’s so much more to it than simply doing it because we can,” Frank Gonzales wrote in a Facebook post a few days ago.

As Frank said himself, that day will come.

In a message to Facebook followers over the weekend, owner Ron Cole said, “we held in there as long as we could,” but at this time he’s not sure the restaurant would be able to stay open because he can’t get the food he needs.

“Just tried to place a $12,000 order with our supplier and all they have is $800 of it available,” he wrote. “SCARY!” He added that the cost of meat he is able to get has “gone through the roof.” That’s a concern Jarrouj has been echoing, as well.

This is yet another reason we need to support them right now — and be extra patient if we experience limited availability and increased prices when we do. I promised you, they’re busting it to do the best they can under the circumstances.